In this guide I will help YOU, a fellow Drag Racer, find the best roads of Mexico to pull reallistic illegal street races against your friends!

If you are like me and enjoy Drag Racing a lot, I’m 100% sure you were excited to see a Forza Horizon held in Mexico, problem is… They added very cool, long and neat runaways for players to unleash their whole car potential, but, what if you don’t want to unleash all your 1500 french buff horses produced by your Bugatti Chiron and instead want to roll race or go from a dig against VTEC Integras with big meaty spinny boys?

Well my friend, tag along, cus I’ve decided to not only “introduce” new players to the wonderful world of illegal 1320Video Drag Racing, but also, catalog the BEST ROADS of Mexico in attempts to bring an IMMERSIVE EXPERIENCE FOR EVERYONE.

Because sometimes, drag racing is not 10 cars lined up without any prep and staging roleplay.

Most spots are ideal for both digs and roll races, you’ll need a coordinated lobby to block NPCs for some, but the majority are pretty empty.

I won’t be teaching how to tune a car for Drag Racing, you’ll find better suited people over the internet and I won’t be dictating which car is better and which isn’t, I’m a huge advocate of racing whatever you like as long as it makes engine noises… I’m looking at you Rimac users.

I don’t condone illegal street racing, if you want to race, go to a proper track, use proper gear and safety measures, do not risk your own life (or others) for amusement, it’s not worth it.

You probably need this house

I big time suggest everyone to get this house asap, I believe it costs around 2,000,000Cr, but, it gives players the option to teleport anywhere in the map (sometimes a must for FH). 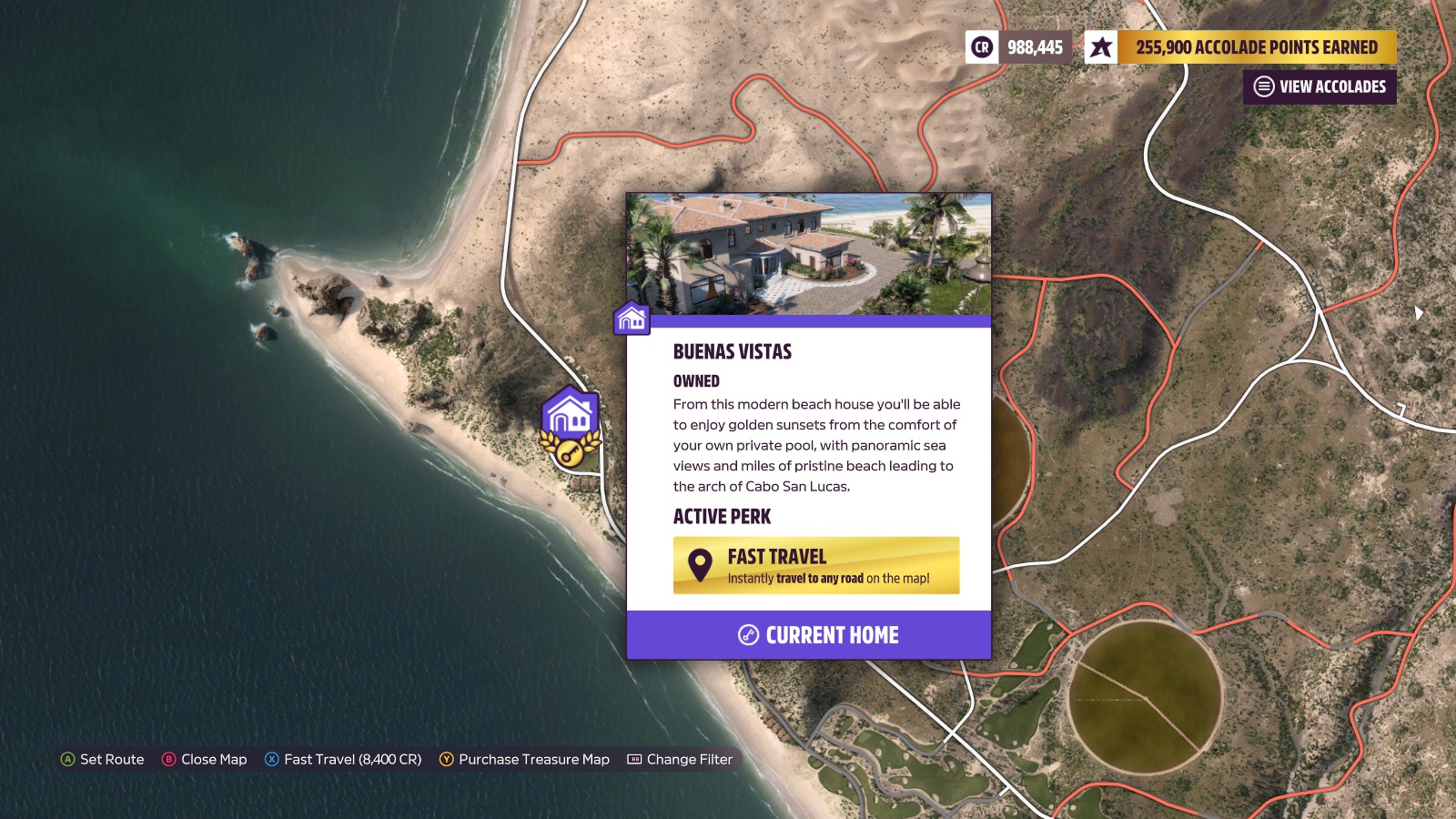 In case you’re unaware, this game features a fully built Drag Spec VW Beetle, but there’s a catch and NO, it’s not buying it from the Auction House or waiting for Forzathon updates. Look at this beauty!

To unlock it, it’s fairly simple, only a bit time consuming (specially for the Baja photo chapter).

All you need to do is complete the El Vocho Storyline, offered by Alejandra early in the game. 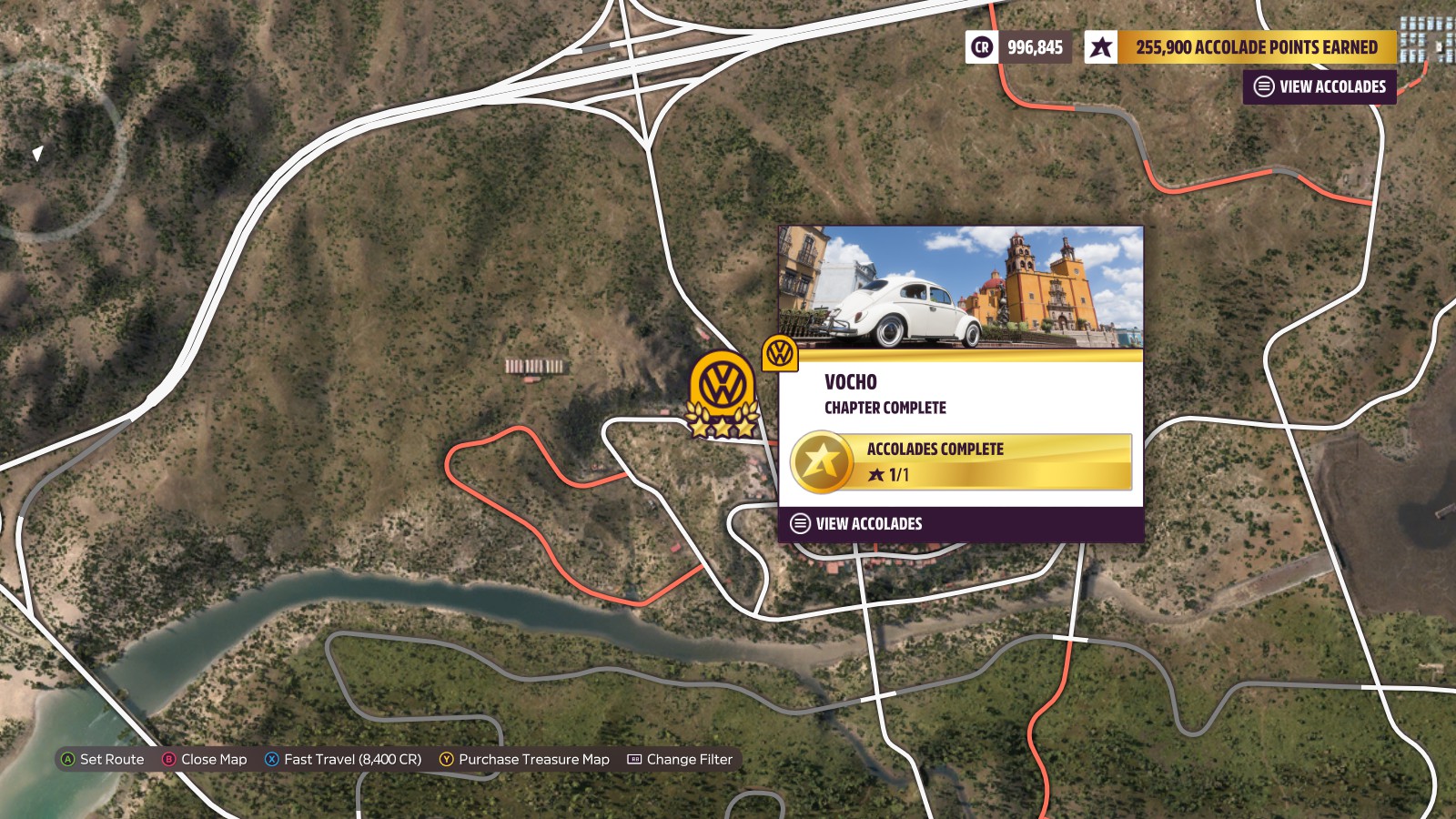 NOTE THAT, you will need to finish building all Festival sites in order to unlock the Hall of Fame, required to unlock the last chapter of El Vocho (and every other storyline).

Your map of the festival need to look like this, in order to unlock the Hall of Fame.

After unlocking the Hall of Fame and wrapping up the last chapter of El Vocho, all you need to do is claim your new VW Beetle on your Accolades page, under the Stories tab. 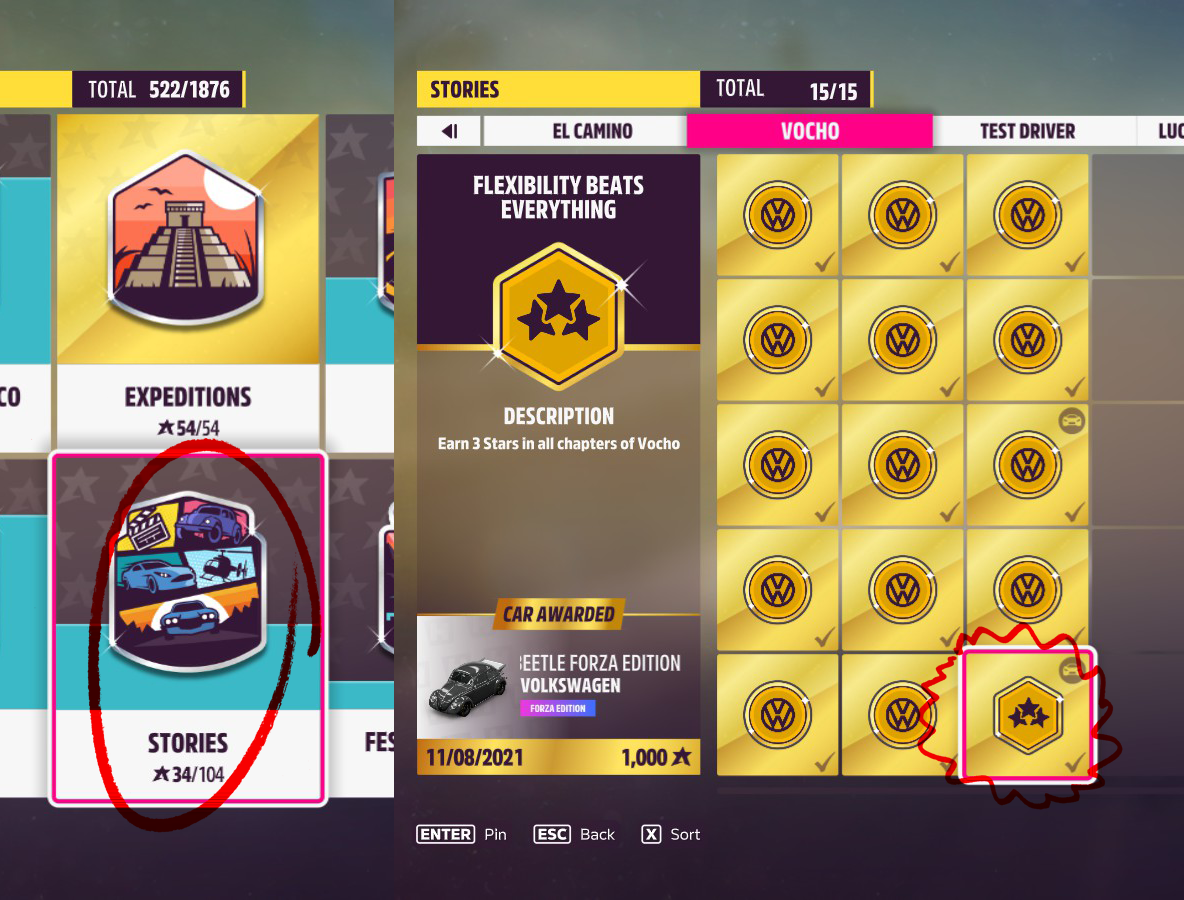 NEVER IMPULSE BUY A CAR FROM THE AUCTION HOUSE Been there. 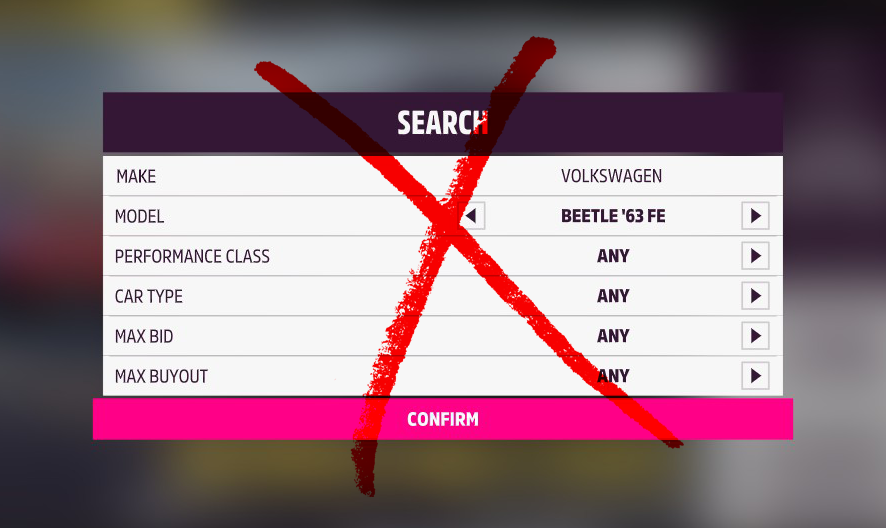 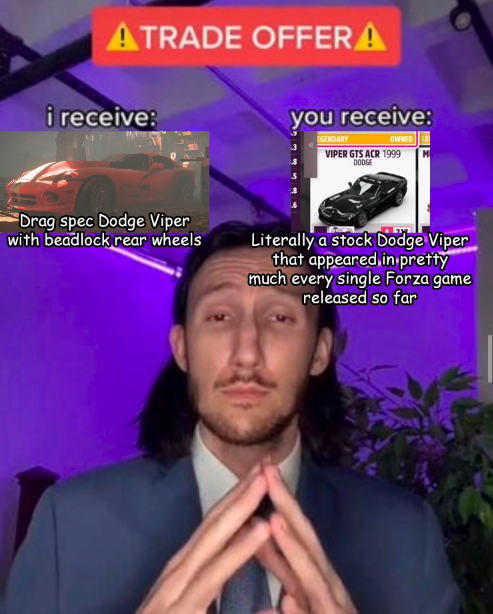 On the middle of nowhere with bad tarmac and a sudden elevation chance by the end to help you slow down when you can’t pack chutes.

Your classic highway s*rip, good for roll racing, chose this part specifically due to it being near the Horizon Street Racing outpost, for fast travelling if you can’t afford the house.

I can’t think of a more “1320Video” s*rip than this one, yee yee brother, watchout for the corn!

Nothing screams “Risk it until you miss it” more than this one. You’ll need more people to block all entrances, unless you wanna pull a NFS Underground and crash into a van.

Very short, good for digs and slow cars… or not. I don’t know how I’ve came up with the name, but it sounds exactly how Jeremy Clarkson would’ve named it.

Very cool with flowers surrounding it.

Really cool one, very remote and the train always passes by.

Dig the tarmac, not the sand.

I highly suggest only rolling from this one, the traffic can get very annoying.

My favorite and the road which sparked the idea for this guide.

It’s a shame we can’t hear the monkeys howling.

If you run it reverse you can roleplay Hot Wheels and fly out of the map.

Another short run, ideal for slow cars, but no one is saying you can’t run a 1500HP GTR on it…

A LA VISTA (THE VIEW)

One of my favorite short runs, the scenery is really cool and the road usually stays pretty empty.

Aim for the finish line, not for the crops.

NHRA would approve this as a Drag venue

This section has nothing of substance if I’m being completely honest, most players already know the existence of them, it’s hard to not notice the big white lines on the map…

It’s hard to miss this one, it’s one of the main vocal points for FH5’s launch.

If you explored the map enough (enough to find one of the VIP houses), you probably found this one, it’s one of the coolest strips imo.

Do I even need to explain this one? Just open the game, finish the tutorial and you’ll find it.

Full map with roads and venues 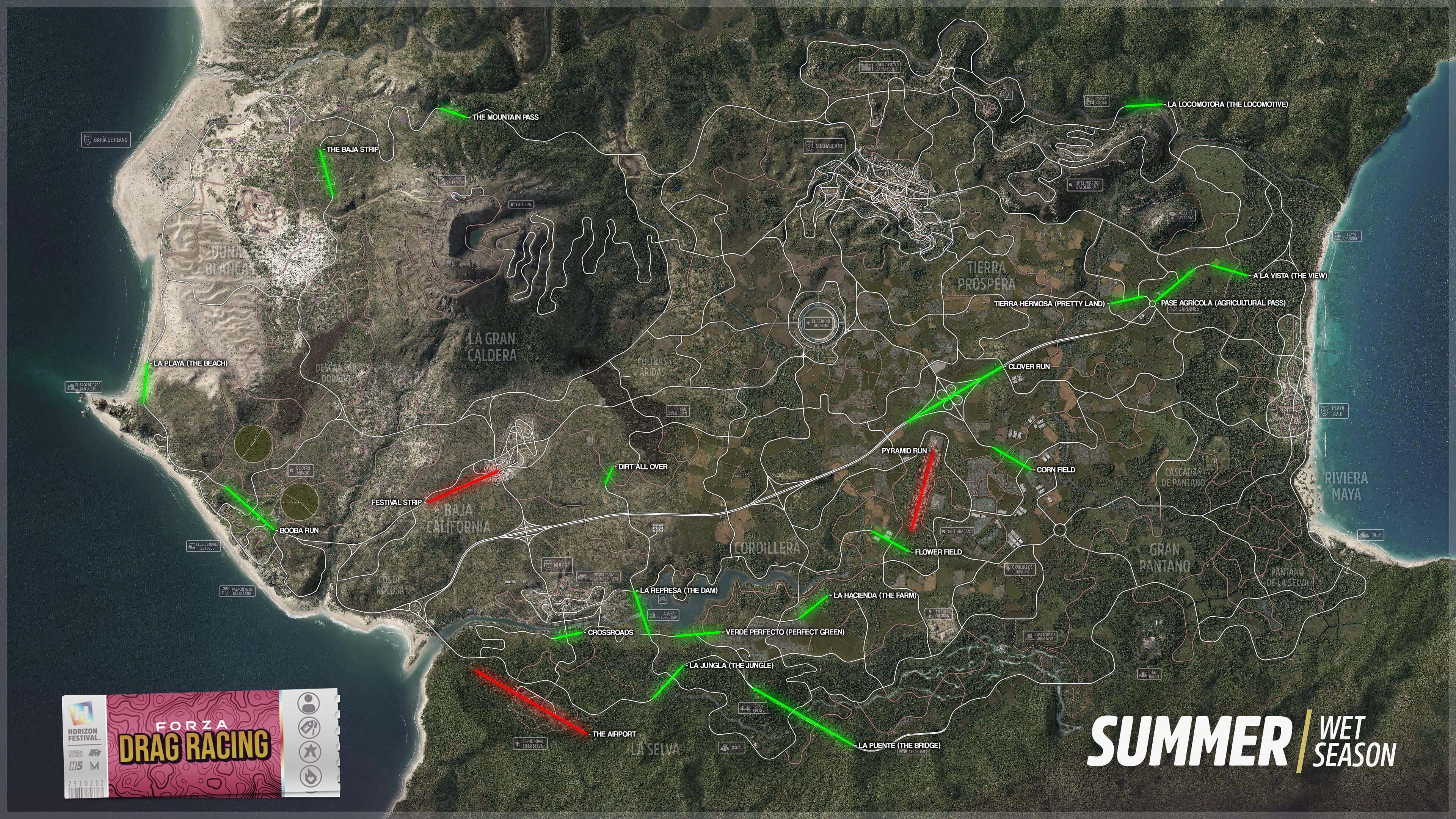 Thank you for reaching the end! I had a lot of fun making this guide and I hope you and your friends (or lobby strangers) have fun running down these venues!

I don’t expect nothing in exchange, but if you want, you can follow me @Palatinik – [twitter.com]  on Twitter, you won’t find nothing of substance but me whinning about my life or my fear of winds…

I hope you enjoy the Guide we share about Forza Horizon 5 – Drag Racer Comprehensive Guide – Multiplayer & Walkthroughs; if you think we forget to add or we should add more information, please let us know via commenting below! See you soon!