In this new educational guide, I show you the basics of software reverse engineering (SRE). I show you how, starting from what we know, we arrive at what we are looking for.

Note: It is generally frowned upon to do SRE on a game, game developers generally don’t like it, what is normal. In this case I explain how this can be legitimely useful to do in the “What we know” section.

Disclaimer: Even if you like this guide, remember that you should not upload the modified Stellaris executable to download sites, as well as you are not allowed to share it with any other person. Sharing this file is totally illegal and could get you in troubles, please don’t try. Just share a link to this guide will be enough, and thus you will perhaps contribute to arouse new vocations, Knowledge is the key :s

Note to Paradox Interactive: Please don’t waste your efforts banning this method, this will be really difficult for you to counter and easy for us to workaround (we could teach each others on how to unpack binaries it is not that hard :s) Ideally to fix this you need to allocate more people on translating this title, it’s unacceptable to have to play in Frenglish, Italenglish, Spanenglish, seriously a project of this mature shouldn’t even need a mod for translations, and in this case, if you had done all this properly translated, yes it would be logical to disable the mods if the checksum does not match but only on important and untranstable files.

Ghidra is a software reverse engineering (SRE) framework created and maintained by the National Security Agency[1] Research Directorate. This framework includes a suite of full-featured, high-end software analysis tools that enable users to analyze compiled code on a variety of platforms including Windows, macOS, and Linux. Capabilities include disassembly, assembly, decompilation, graphing, and scripting, along with hundreds of other features. Ghidra supports a wide variety of processor instruction sets and executable formats and can be run in both user-interactive and automated modes. Users may also develop their own Ghidra extension components and/or scripts using Java or Python.

In support of NSA’s Cybersecurity mission, Ghidra was built to solve scaling and teaming problems on complex SRE efforts, and to provide a customizable and extensible SRE research platform. NSA has applied Ghidra SRE capabilities to a variety of problems that involve analyzing malicious code and generating deep insights for SRE analysts who seek a better understanding of potential vulnerabilities in networks and systems.

Little advice for my brothers under Arch Linux 🙂

The following 3 versions are available

If you just need Ghidra for the guide, community/ghidra[4] will suffice and will do all what you need.

aur/ghidra-git[5] is a fork of community/ghidra[4], with it you will build Ghidra completely from the sources on the master branch at every new commit made on Github. It has no debugger because it is currently in development on another branch.

I’m personally using and maintaining the aur/ghidra-dev[6] package, it is defined to use the debugger branch, it is faster to build with parallel mode enabled, and I enabled the debugger by pointing the package to the debugger branch on Github. I initially forked it from aur/ghidra-git[5], but it is now a rework from scratch to better follow the recommendations of Ghidra’s developers with a cleaner PKGBUILD master file.

With aur/ghidra-dev[6] you can now have a disassembler and a debugger side by side in early preview (because it is not released yet), but it’s fully functionnal and really amazing to use.

With Ghidra, it’s very easy to understand and modify an executable, whether it is compiled for Windows, Linux or MacOS.

But currently a very interesting feature is missing which should see the light of day soon. Currently with Ghidra, you are able to patch an executable in the own ram memory of Ghidra, it is called “Patch Instruction” but in order to be able to commit the patch in the executable on the disk, you will need to install a Ghidra script called savePatch[2].

In order to install it, please follow these instructions : 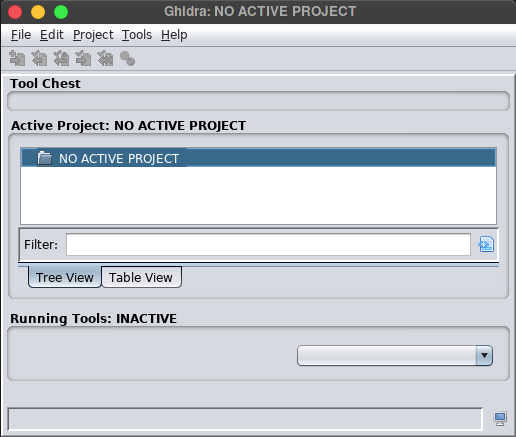 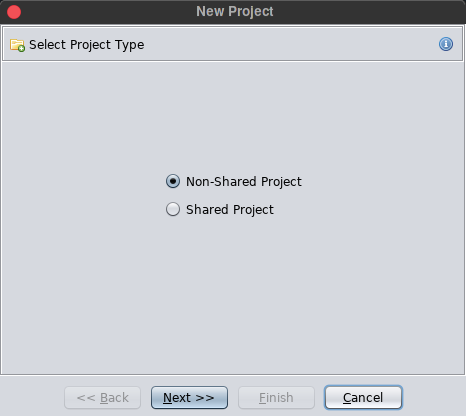 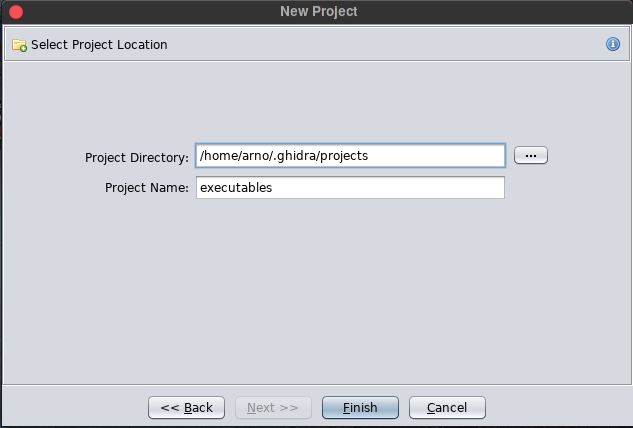 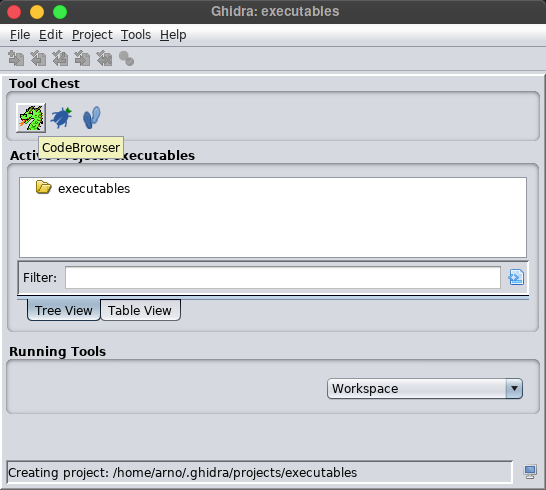 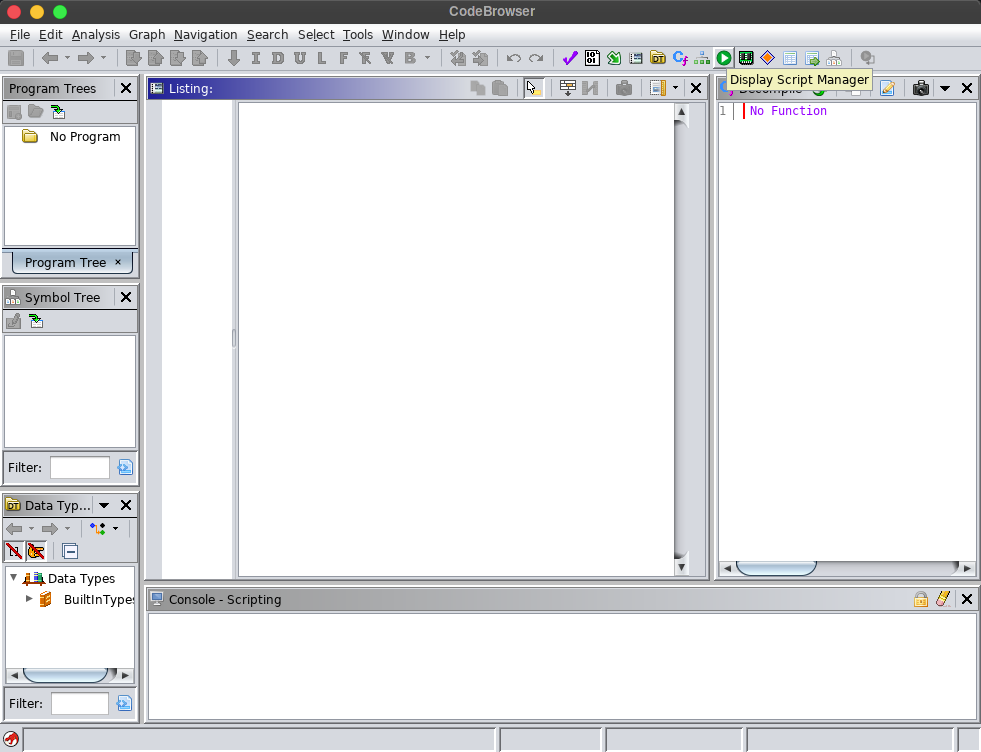 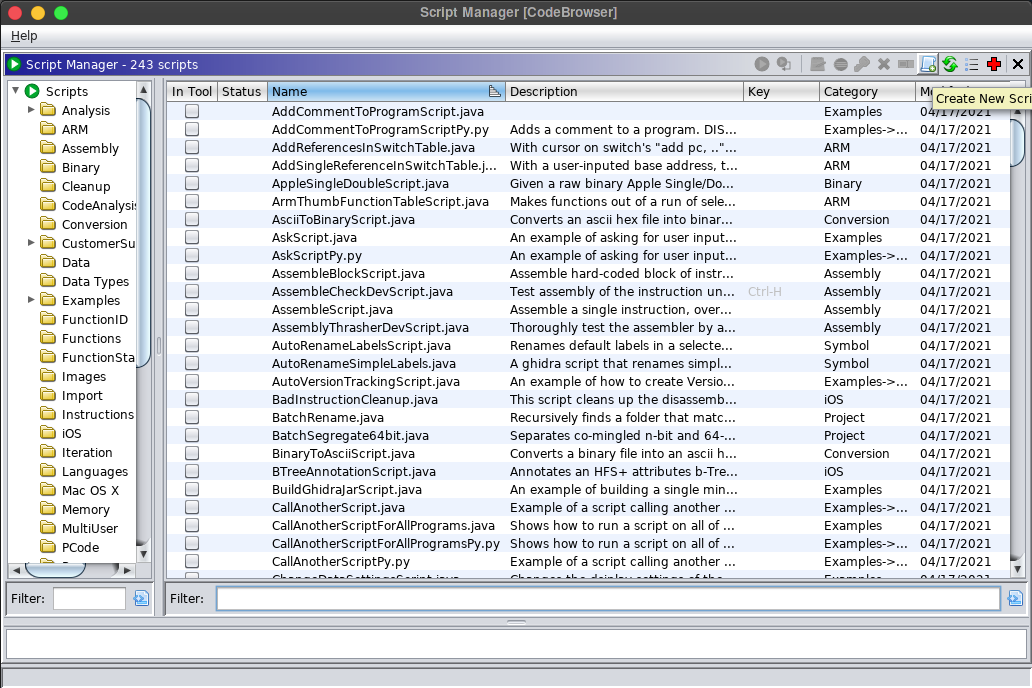 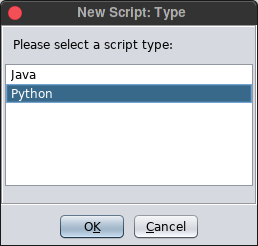 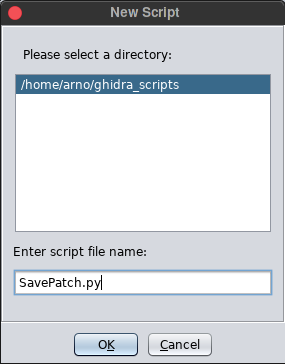 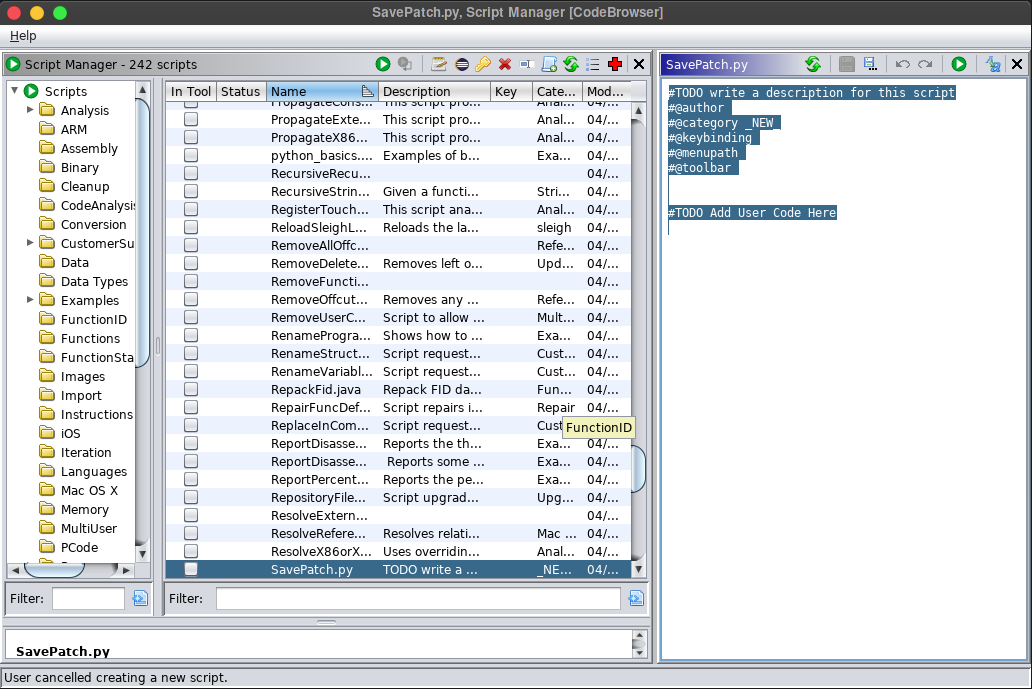 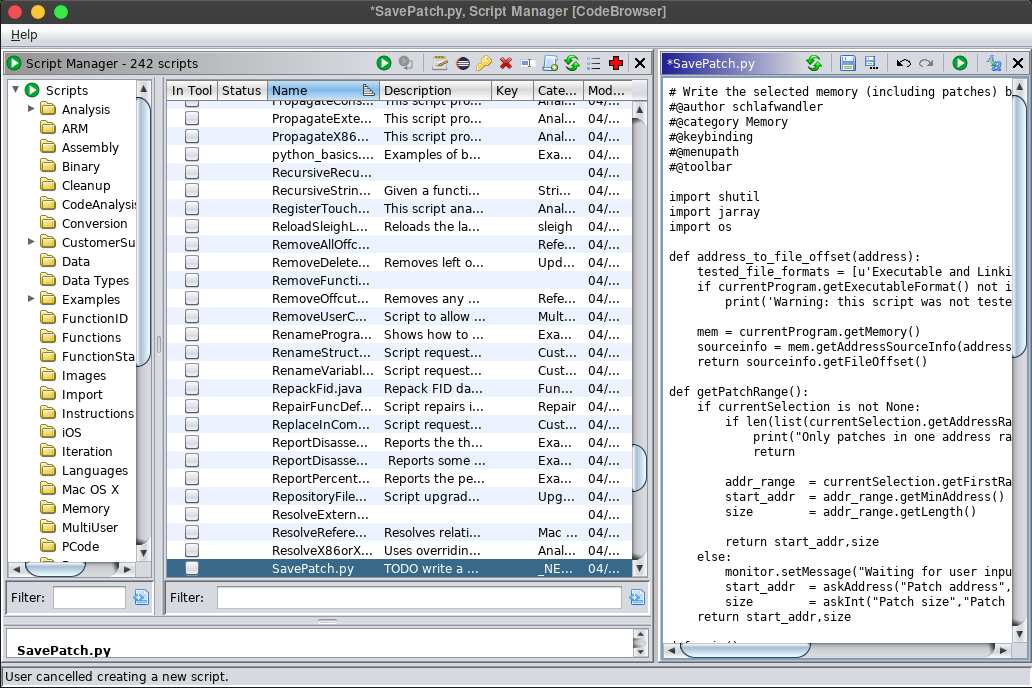 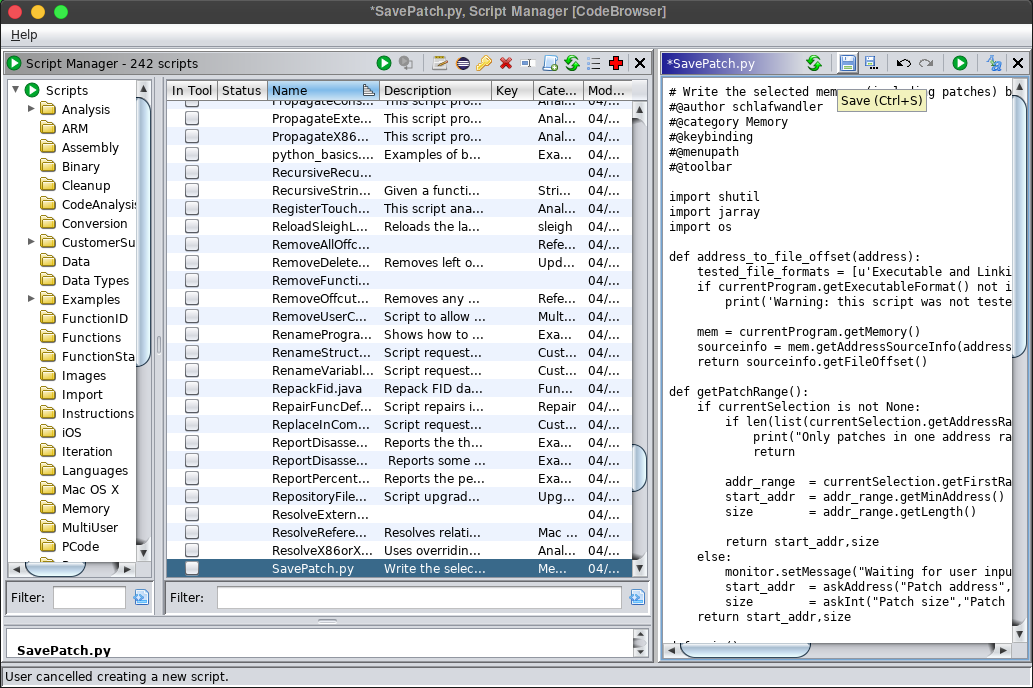 Congratulations, your Ghidra installation is all set and we can start right now with the real deal 🙂

Regardless of the file content, the name of the checksum_manifest.txt file seems like a good entry point to understand the integrity checking system, you will understand very soon.

The first step is to analyze with Ghidra the structure of the executable file of the game (stellaris on Linux, stellaris.exe on Windows, etc …)

This step is better known as disassembling the Stellaris binary executable.

In order to start the analysis, please follow these instructions : 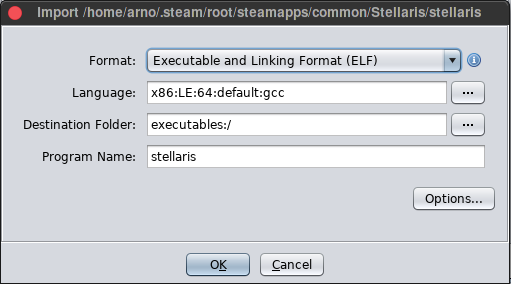 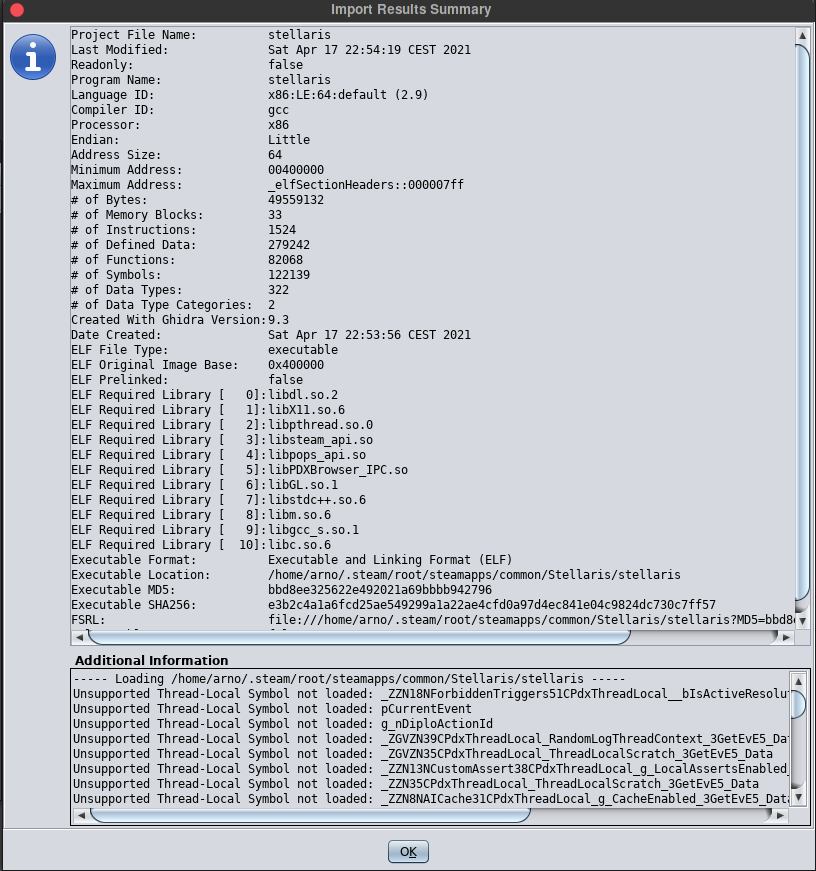 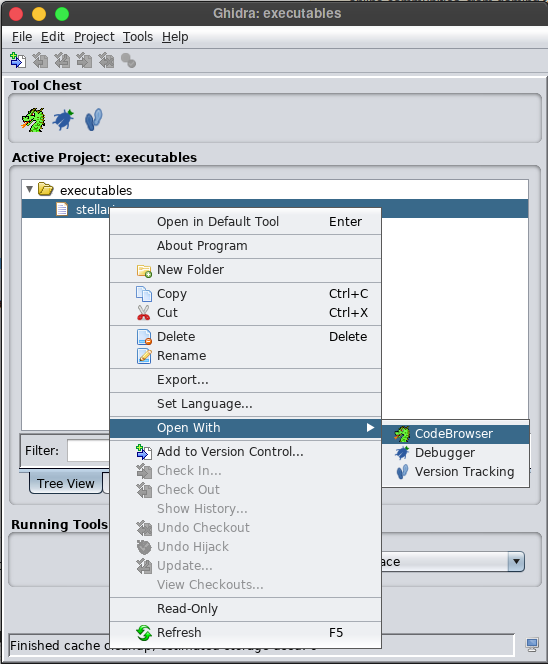 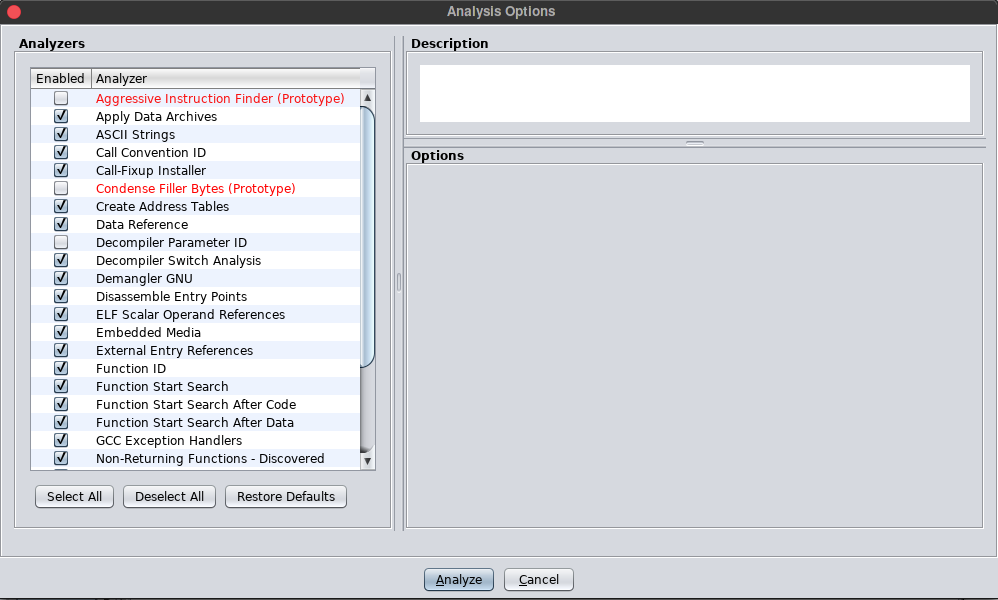 Well done, the analysis is over, it’s only a matter of minutes now to find what we’re looking for 🙂

Discovering the point of interest

Now that the analysis of the executable is finished and saved, we can therefore search for our first point of interest, the point which will bring us closer to what is to patch to activate the achievements permanently.

Do you remember the name we found in step “What we know”, checksum_manifest, now is the time to use it.

We are therefore going to find out which part of the executable’s assembly code calls on the checksum_manifest.txt file, please follow these instructions : 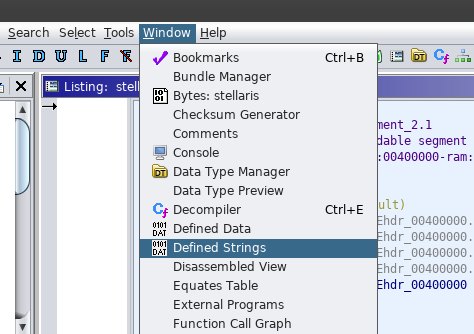 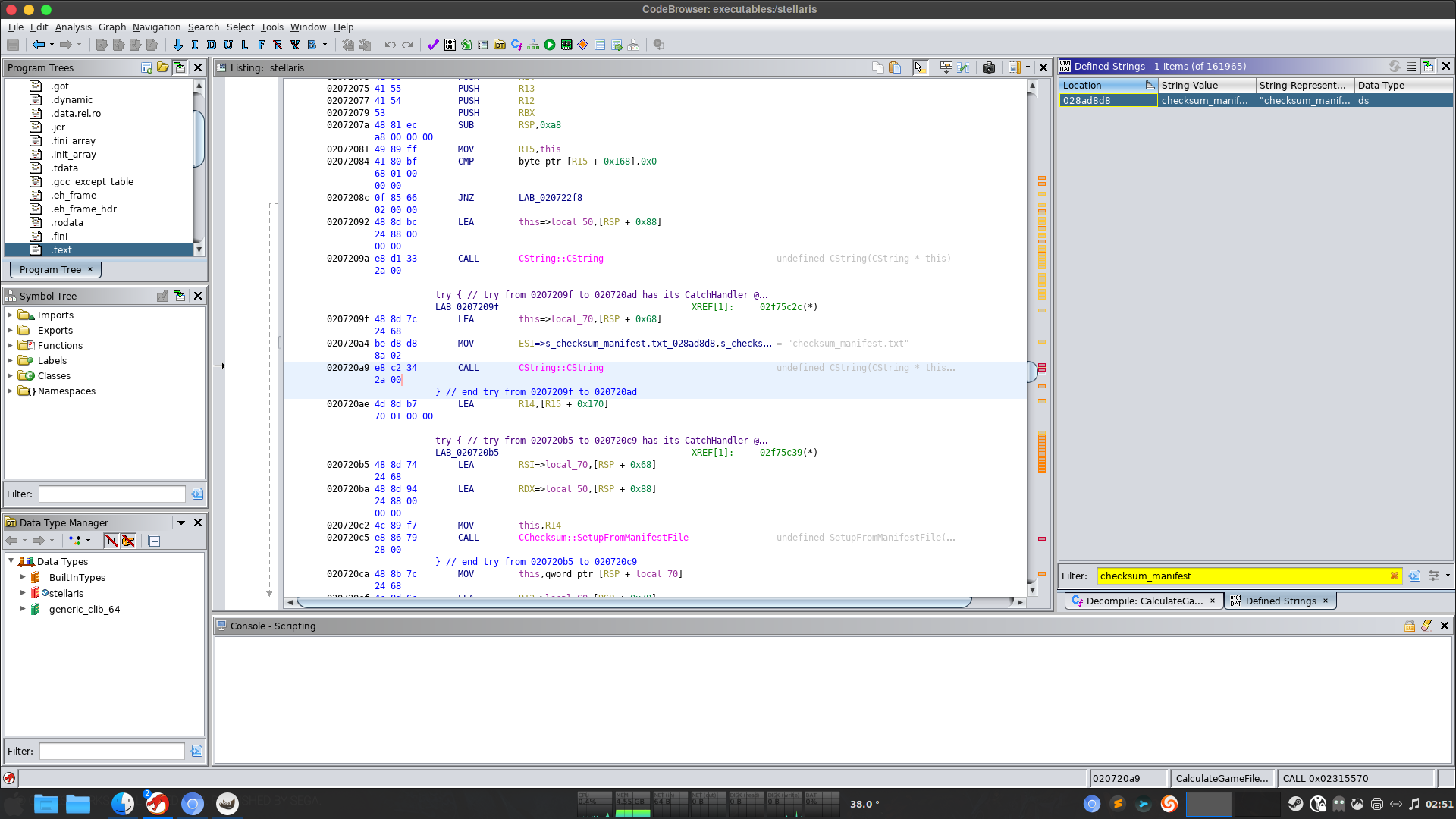 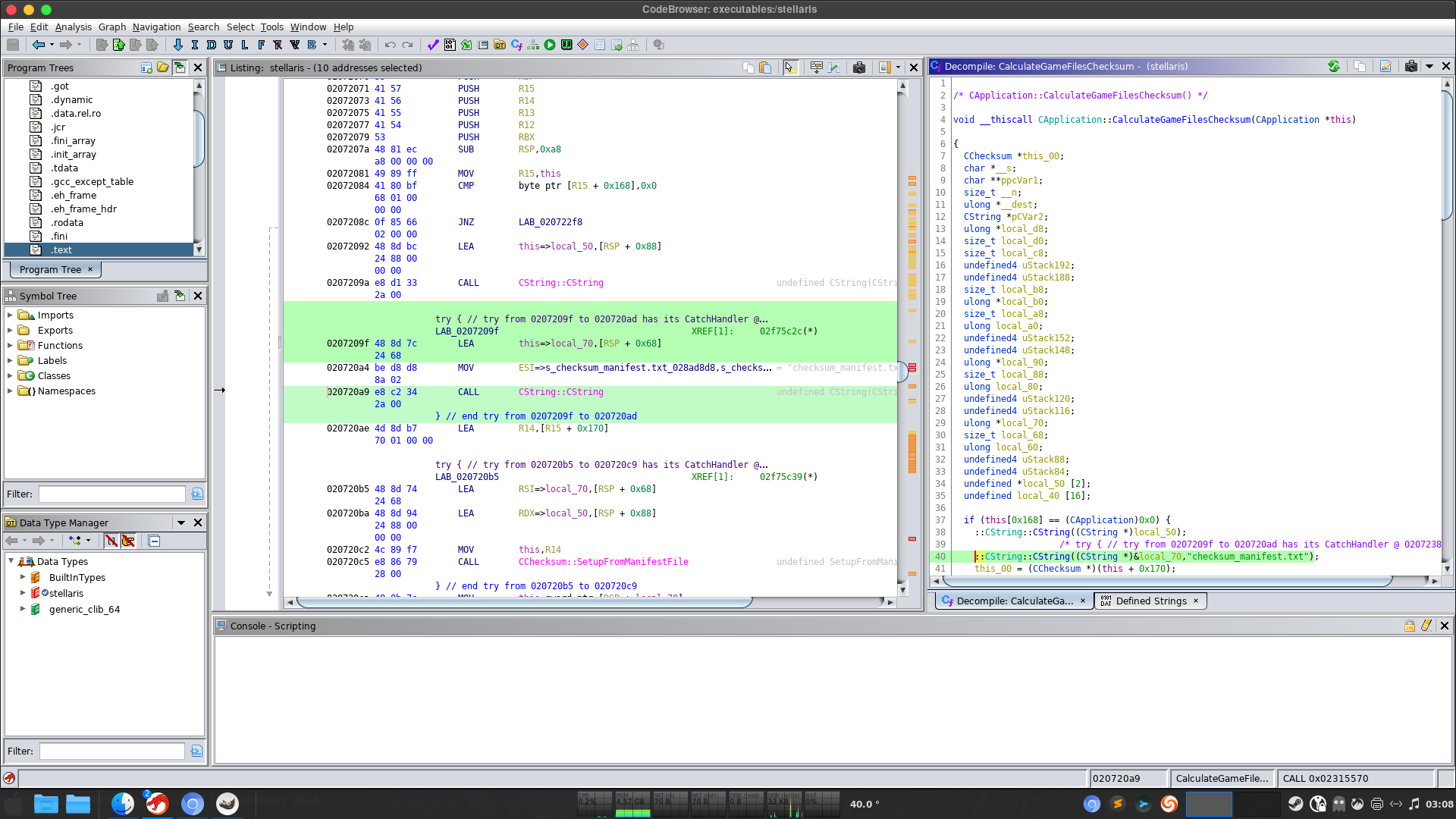 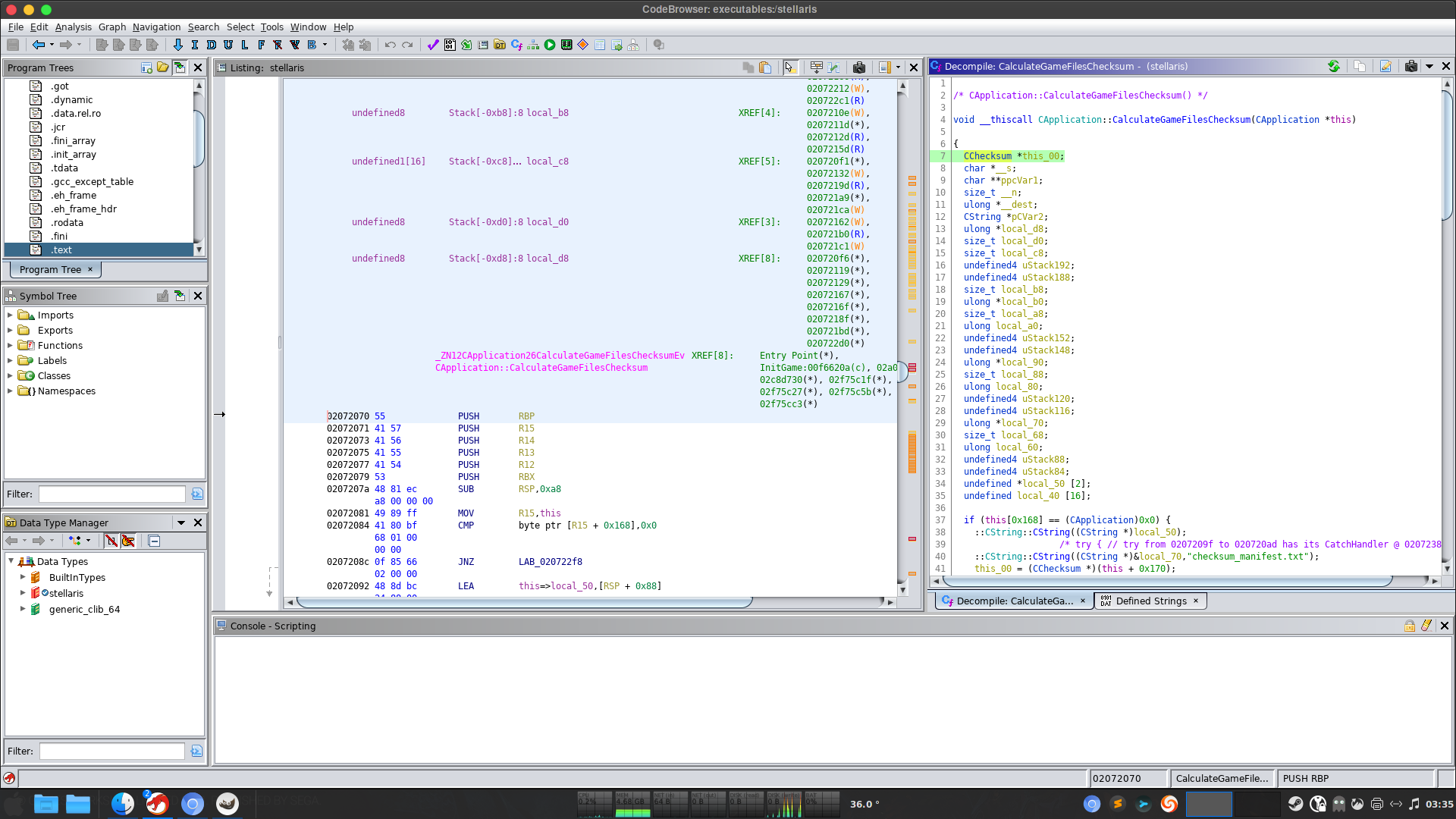 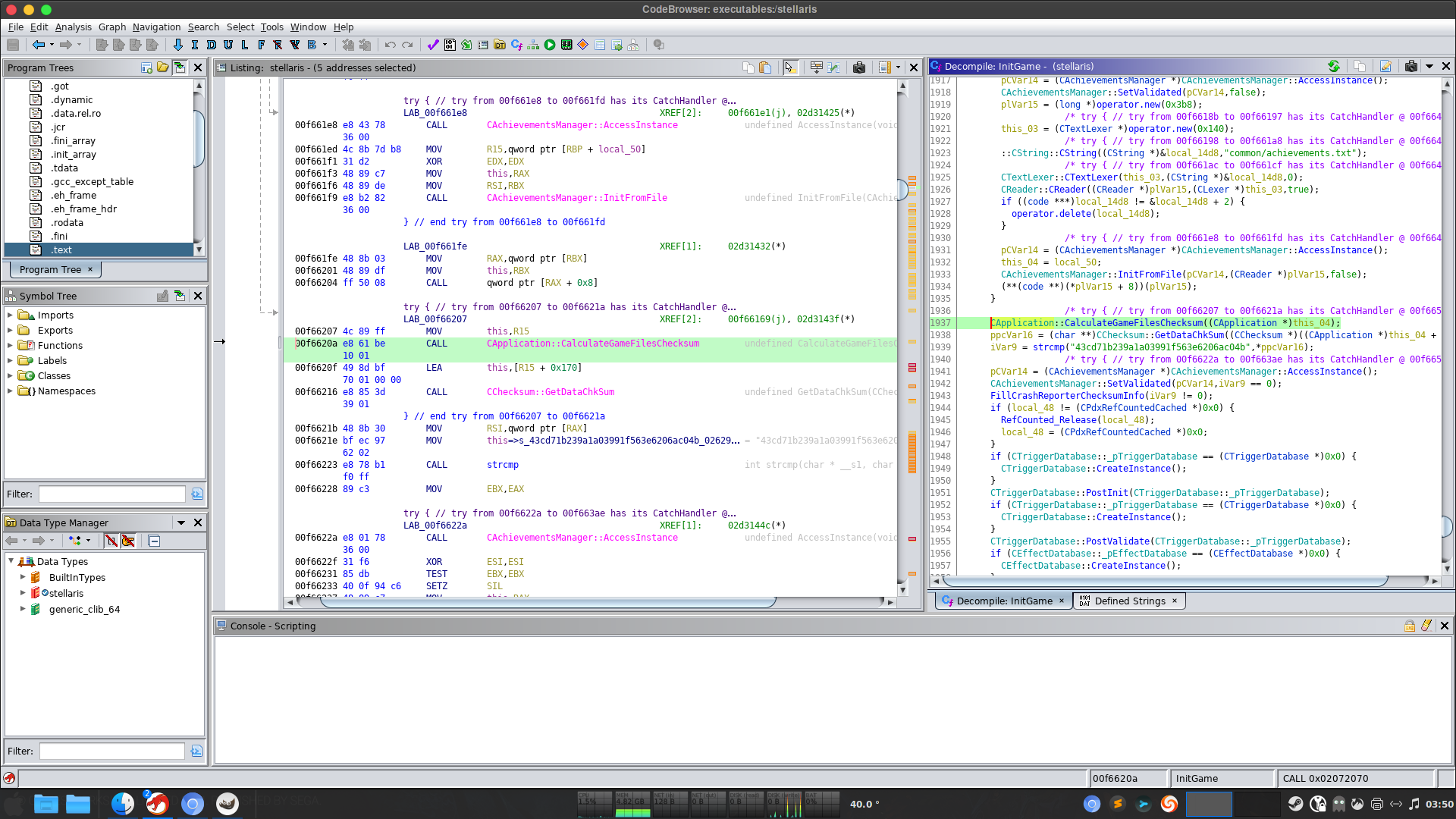 Congratulations ! you just found the code responsible for checking whether the integrity of files is valid or not. Now you have to understand it and patch it in the simplest and cleanest way possible.

Understanding the code to patch

One of the best options that Ghidra brings is its decompiler, it is able to translate assembly code into C code so that the program is easier to read. And in my opinion, it does that even better than IDA Pro, another paid disassembler that was the only one to offer this option for several years.

There are several very useful informations that we can take from decompiled C code.

strcmp() is a C method which does string comparison, a return value of 0 means strings are equal

There are several ways to correct this code, the shortest (2 bytes to modify) and fastest one is most definitely; If we manage to patch iVar9 so that it always contains 0 (regardless of the previous call to CalculateGameFilesChecksum), the integrity check will always be successful and we will be able to unlock achievements even with the mods enabled.

Note: It won’t even trigger the alert Paradox Interactive seems to have maliciously concealed to be alerted to integrity test failures with the FillCrashReporterChecksumInfo(iVar9 != 0) instruction :s

Now let’s take a look at how this strcmp() method works with a side by side view.

In assembly language, a conditionnal check is often represented by the CMP with the JNZ/JMP instructions or TEST and CALL instructions.

Without going into details, here what we can see is that iVar9 is actually the EBX register, and if we manage to force EBX to be 0 all the time, the file integrity check will still run with success regardless of the call to strcmp 🙂

The magic is in the XOR instruction.

XORing an operand with itself changes the operand to 0. This is used to clear a register[7]

In this case, we will use XOR to clear the EBX register to 0, we will replace

in order to force EBX to always contain 0 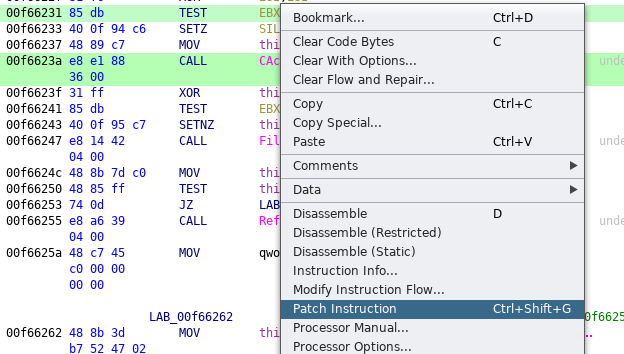 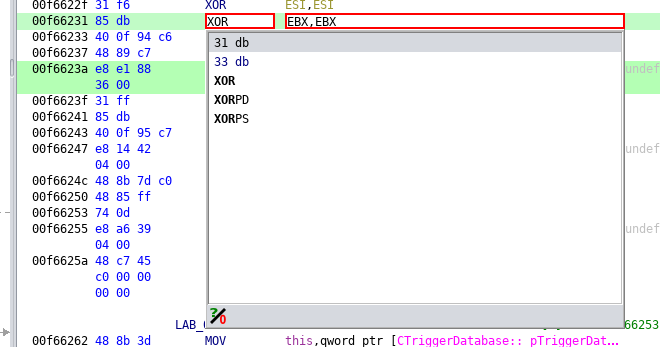 As you can see, the change we just made is visible directly in the decompiler. Thanks to Ghidra ! That confirms that this is exactly what we were looking to do !

Now keep in mind that these changes are currently residing in Ghidra’s ram memory. We need to send them to the executable on the hard disk.

This is where the previously installed SavePatch script comes in.

I insist on the fact that if you want SavePatch.py ​​to work correctly you have to select the whole modified row and not just click through 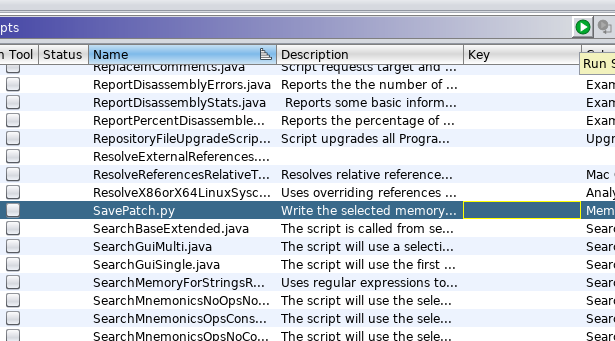 If you don’t see this screen but another instead, it means that you have wrongly selected the row in the Listing window, git gud at selecting ;s 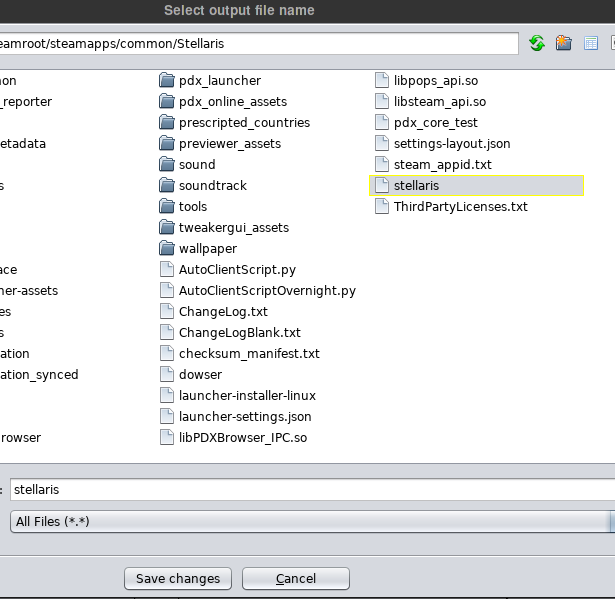 Stellaris is now patched. So you can, provided you have activated the IronMan mode, unlock the Steam achievements while having mods enabled.

Hope you enjoy the Guide about Stellaris – Enabling Achievements With Mods All game versions, if you think we should add extra information or forget something, please let us know via comment below, and we will do our best to fix or update as soon as possible!