A guide that will help you to increase the quality of your gameplay by improving the game performance.

So today, lads, I’ll tell you how to optimize PAYDAY 2 with its cool game engine.

You may ask, why I’m so sure that it’s the best optimization guide ever created? the answer is easy: I use all this stuff to play the game without pain. Also, this guide aims to improve the quality of gaming not only for low-spec gamers. It also helps players with good machines who just want to stabilize their game.

Here you won’t see mods that make soap bars out of NPC and game textures overall or cool advice like “download borderless gaming” because those things don’t work at all. Instead, I’ll give a bunch of mods, recommend some game settings, and, most important, show how to change the game with some manipulations in renderer_settings.xml.

This is a text English version of my video guide that was released recently. I decided to make it a fully new steam guide to explain some things better and just because subtitles aren’t the best way to give the information like this. By the way, I would like to ask you to go and rate my video since I spent some time making it as helpful as possible:

The difference between this guide and my video is not only in language. I won’t show off my modpack here as I did there, but I’ll try to talk more about some valuable mods that can improve the game’s performance.

After that being said, let’s move on to the main part of our guide.

The easiest way to optimize your game is by video settings.

First of all, I’ll show you which settings affect your performance: 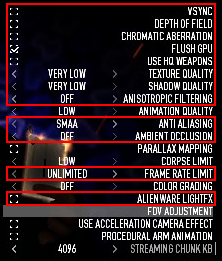 ~ Flush GPU eats some of our FPS, but it improves the quality of gameplay.

~ Corpse Limit also affects FPS, but we have something special for it in the mods part.

Apart from that, there’s an Effect Quality option, that you may need to keep at a low level if your machine is not the best one:

If your computer is good enough, play with settings the way you want, I’ll just give you mine for extremely bad PC: 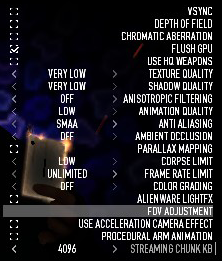 This thing is needed for a truly bad computer, like mine, so if you don’t suffer from standard game resolution options, skip this part.

If you haven’t noticed, I didn’t show you my resolution. The reason is that I don’t use vanilla once. My game resolution is 640×480, which awards you with a huge FPS boost (around 1o frames) and less freezy gameplay. But yes, there is no such an option in the base game, so we need to work with the game’s configuration, to be clear, with the “renderer_settings.xml” file from the AppData folder.

How to get to the “renderer_settings.xml” file?

First, press Win+R. This hotkey will open a small window where you need to paste a command “%localappdata%. This manipulation will give you immediate access to the folder that we need. Then go down and find the “PAYDAY 2” folder and open it. Here we are. Now open “renderer_settings.xml” with NotePad if you have it, it’s way more comfortable for programming than the vanilla Notebook (or whatever it’s called in English Windows, lol). Go to the “renderer config” part and play with the “d3d_device” part: here we can paste our custom resolution and some other settings, but you don’t

need to touch them. Should mention that the game becomes unplayable if you put the resolution lower than 640x480p, don’t even try to do this.

That’s how my “d3d_device” part looks:

Now let’s move to the most important part of the config, the one that changes things. “Render_settings” part can help to do a lot of crazy things, starting from simply lowering the quality of some specific settings, like a texture quality of the sky, grass, and the other objects, ending with disabling the lights in the game, but we will talk about it later. So, I won’t stop for a while here, just copy this stuff and paste where it should be.

That’s how my “render_settings” look:

Now let’s return to one specific setting that I have already mentioned – disabling lights in the game. To do this, we need to paste one more command into our config. I have it after “<variable name=”shadow_quality” value=”disabled”/>”, but I’m not sure that this little detail plays a big part so put it wherever you want. This little thing increases your FPS for an additional 10 or even more FPS (depending on map or your PC specs). However, some artifacts are coming out from this, look at the comparison below. 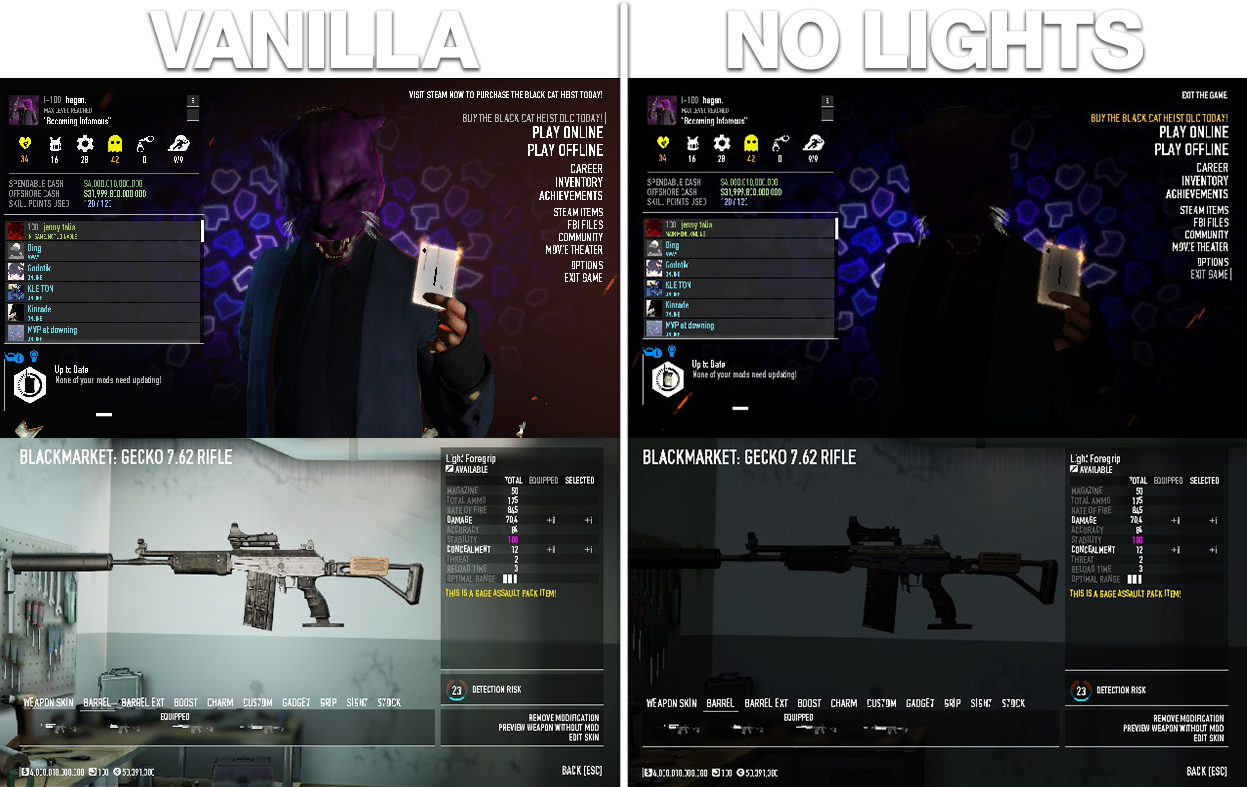 An additional command to disable the dynamic lights:

If you are lazy to copy and paste all this a few times, follow the link below and download my own “renderer_settings.xml” file, find your config, and replace it with a just downloaded mine version. Be sure to delete the command that disables the lights if you don’t have problems with it.

Mods give you the solid FPS boost as well. I have around 50 mods installed to keep its performance steady. I need to mention, that some of them ruin the visual quality of some effects and textures, which may not satisfy a player with a good PC who just wants to stabilize his game and get some additional frames. That’s why I’ll put my mods in two different chapters, one will contain additions, that every player can use to make the game better. The second will be filled with mods that suit only the ones with a gaming microwave.

I’ll make this one a separate chapter so it will be easy to find.

Here’s a link, that will lead you to the folder with all you need to optimize your game. I should mention, that the mods arent split into the same categories as I did in this guide, so delete all you don’t need.

I hope this guide was truly helpful. Here I tried to share the results of my attempts to optimize the game that turned out great. I should say thanks to fusioN – [steamcommunity.com] , my brother with the same problem, who shared his mods with me so I was able to complete the pack. if you will have any issues with mods or config settings, go ahead and write it down below, maybe we can fix it together. Thanks for reading, have a nice game 🙂

I hope you enjoy the Guide we share about PAYDAY 2 – Best Optimization Settings Tutorial Guide; if you think we forget to add or we should add more information, please let us know via commenting below! See you soon!