A guide for the Snowball throwable.

This is a guide for the Snowball throwable. Wait, I hear you ask, an entire guide just for a throwable? Yes, dear reader – the snowball has some very unusual properties and creative uses. So let’s get into it.

The snowball is a throwable, with the following properties:

It also has quite possibly the most tragic property of only being available until Jan 12, 2021. If you’re reading this guide past that date, this is a monument to all the fun you missed out on.

The snowball deals explosive damage, so it will trigger certain sounds when it hits certain objects. For example, upon hitting a Bulldozer, it will create a “clanking” sound, as though you had hit the Bulldozer with a grenade or rocket.


Even funnier is when you hit a destroyable lock on a metal door (such as the one on Art Gallery’s entrance) with the snowball: it creates an “explosion” sound as the door opens. To add to the hilarity, the snowball is silent, so this will not alert anyone in stealth.


The snowball can damage shields through their shields. This raises the interesting question of how a muscle-powered weapon can break through something that stops bullets in their tracks.


Despite having an explosion radius, snowball kills will count for the Gift Giver achievement.

If they’re hit by a snowball, but don’t die, they will always show an explode hurt reaction (stagger for 1.5 – 2.5s). You can use this time to get around them and shoot them from the side/back, provided the shield is alone.

Bulldozers are too tanky to take out with snowballs alone, but snowballs are great for removing their visors. Each snowball removes one visor, and Bulldozers have two, so after two snowball hits, their faces are fully exposed and you can go to town on them with your weapons.


Other enemies not listed have high enough health that killing them with snowballs alone is not a feasible plan. Nevertheless, snowballs are still great tools for chipping them. We’ll see how to use snowballs for this purpose later on.

After throwing a snowball, there’s a slight delay before you can fire your weapon again, as your character needs to raise their weapon. This delay is the equip time of the weapon.


It’s a good idea to pick a weapon with a short equip time. The average equip time is about 0.5s (most akimbos, SMGs, and some ARs are in that range). Pistols are generally faster (0.35s), while “heavier” weapons like LMGs and miniguns are slower (0.9s).


Additionally, try not to have weapons that fill a similar role as the snowball. The most prominent examples are the 5/7 and HE/AP Judge – they are used primarily as shield killers, but the snowball already deals with shields, so having both on the same build is redundant. You could have a combination of 5/7 + concussion grenade, or some other 30 concealment weapon + snowball instead.

Suppose you’re not sure if there’s an enemy in a room or vent (such as the ones on No Mercy), or around a hallway, as the walls or ceilings block your vision. You can eliminate any nasty surprises by simply throwing a snowball ahead. The snowball takes time to travel through the air, so by the time it impacts with a wall or enemy, your weapon should already be back up and ready to fire.


This is a low-risk, high-reward move. If there happens to be an enemy there, it will be damaged in the snowball’s explosion, and your hit marker will display a red X to notify you of that. Then, you know that you should be more cautious when proceeding. If there is no enemy, well, nothing happens. But it doesn’t cost you much to throw the snowball anyway; you get it back in 2s.


For vents, aim for the rim of the vent and not the hole where enemies pop through. If you throw a snowball through the vent, it will land on the ceiling way above, too far to catch any enemies in its explosion radius.


This can also be done with grenades, but snowballs regenerate the fastest. The explosion radius on snowballs is smaller than grenades though.

Let’s say you’re in cover right now, and unlike the example in Scouting Ahead, you already know there are enemies in front of you. What you can do is press the throwable key before you start moving out of cover. It takes some “startup” before the snowball is thrown, so if you time it right, the snowball should leave your hands right as you peek out.


If you are too slow, the snowball will hit the cover you were hiding behind and possibly damage you. If you are too fast, you will be exposed to enemy fire for slightly longer than you’d want.


After throwing the snowball, you have a few options. You can continue with your plan of attacking with whatever weapon you’re holding. Or, if the enemies noticed you and broke your armor before your weapon came back up, you can duck back into cover and reconsolidate.

If you are in the middle of reloading and press the throwable key, your reload will be interrupted and you will throw a snowball. This is useful if, for example, you’re reloading in cover, but an enemy rushes your position and gets in your face. You can cancel the reload and counterattack with a snowball. If the enemy is a light/heavy, you can shout at it to neutralize it while restarting your reload.


Note that this can be done with other throwables too (melee as well), provided there’s an actual throwing animation (so not the injector, flask, dispenser, pocket ECM, or ampule). It’s just that the snowball is more practical than most other throwables – the Ace of Spades does too little damage, and you wouldn’t want to waste a grenade of any kind just to cancel a reload.

The snowball’s explosion can be used to damage yourself for various purposes, such as:

If you’re wearing the suit and do not have any armor bonuses (from Iron Man basic, Anarchist, the Protector crew boost, etc), you can break your armor by looking straight down and throwing a snowball. This also damages your health slightly, so be careful if you’re very low on health.


As with reload canceling, other throwables can be used to damage yourself, but the snowball has two big advantages: it is silent, and regenerates. Being silent means it can be used anywhere in stealth – molotov cocktails have an alert radius of 15m, so you have to use them far away from enemy territory, usually at the spawn point. Regenerating means you’ll always have access to them in loud, no matter how many times you healed to full health with doc bags.

Throwing a snowball at a bag on the ground causes it to bounce, much like shooting it with an HE shotgun. This can be used to push bags away – just aim at the ground in the opposite direction of where you want the bag to go, and throw a snowball.


Experienced Overdrill players should be familiar with this trick to speed up the transport of all those bags of gold. Now, instead of reserving a weapon slot for a HE shotgun, you can reserve your throwable slot for snowballs instead, with the same purpose. 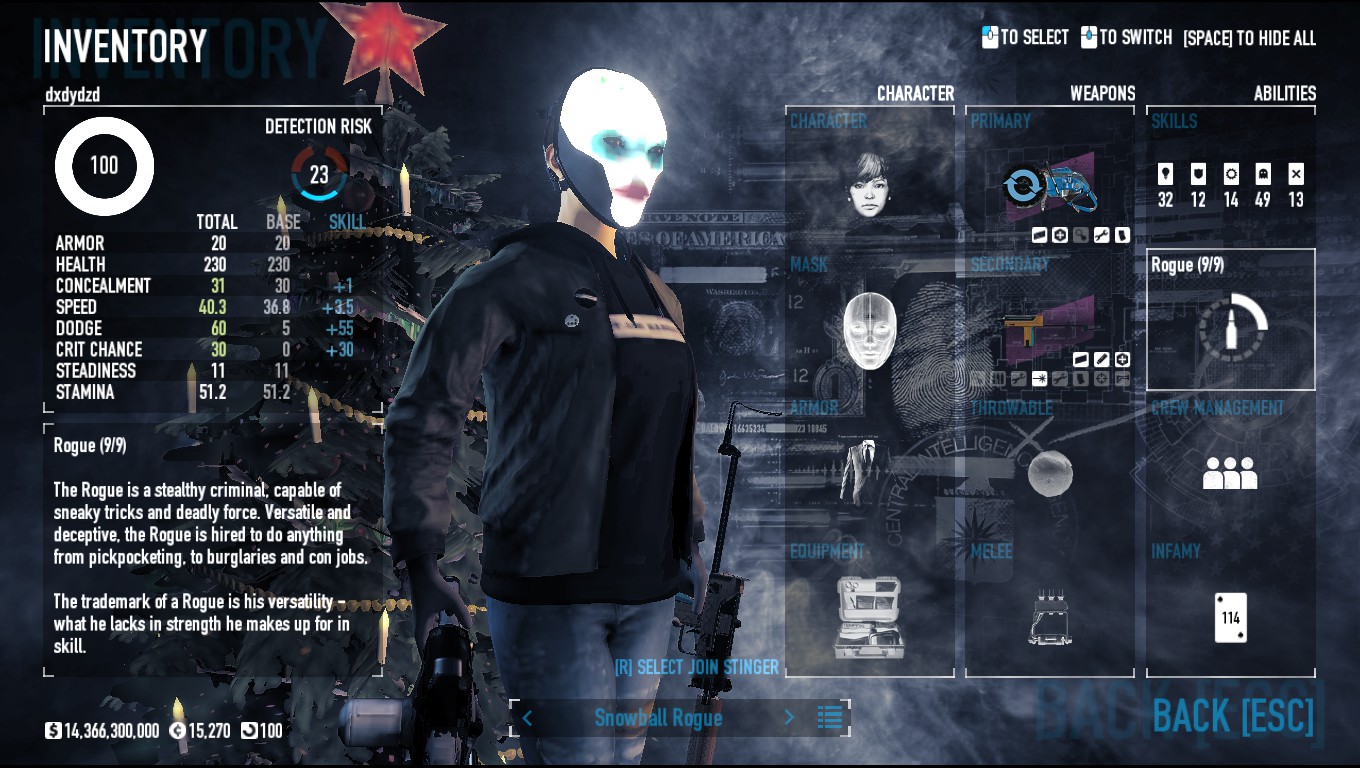 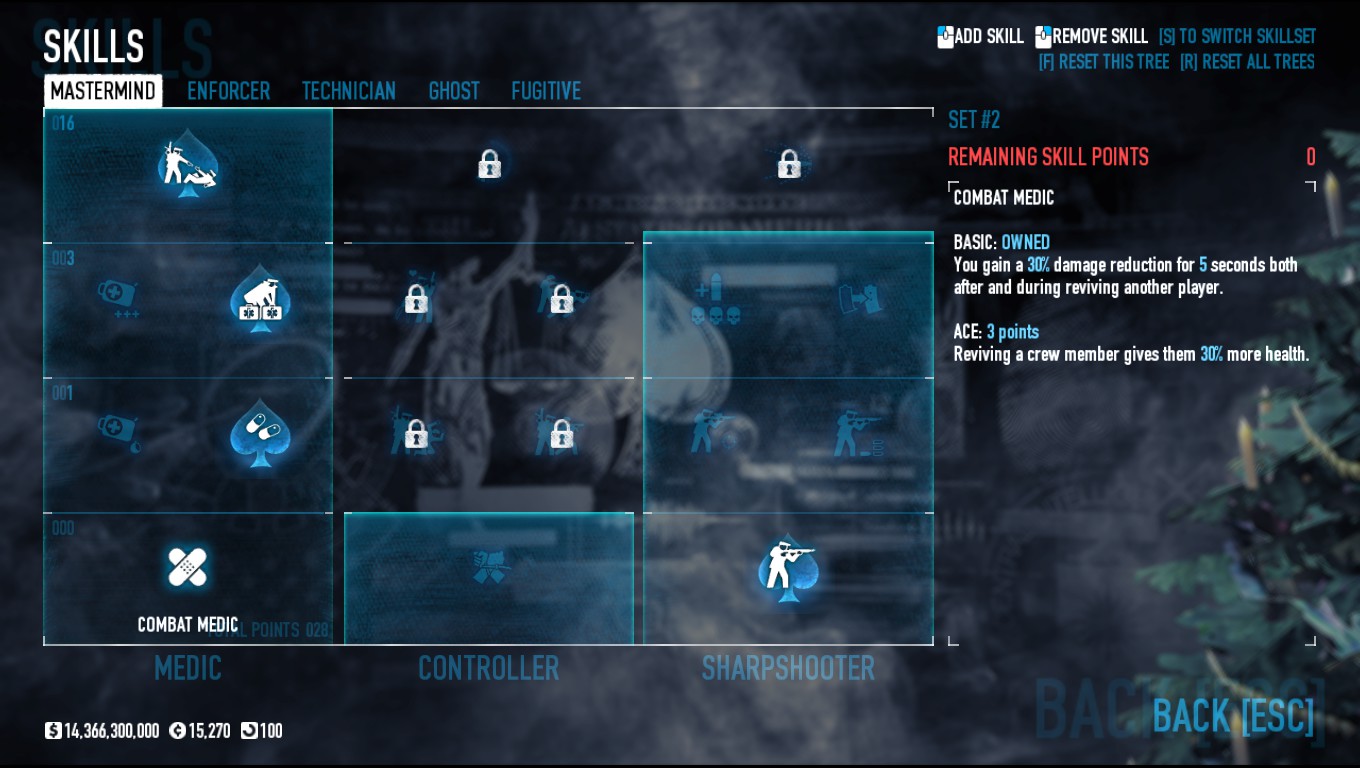 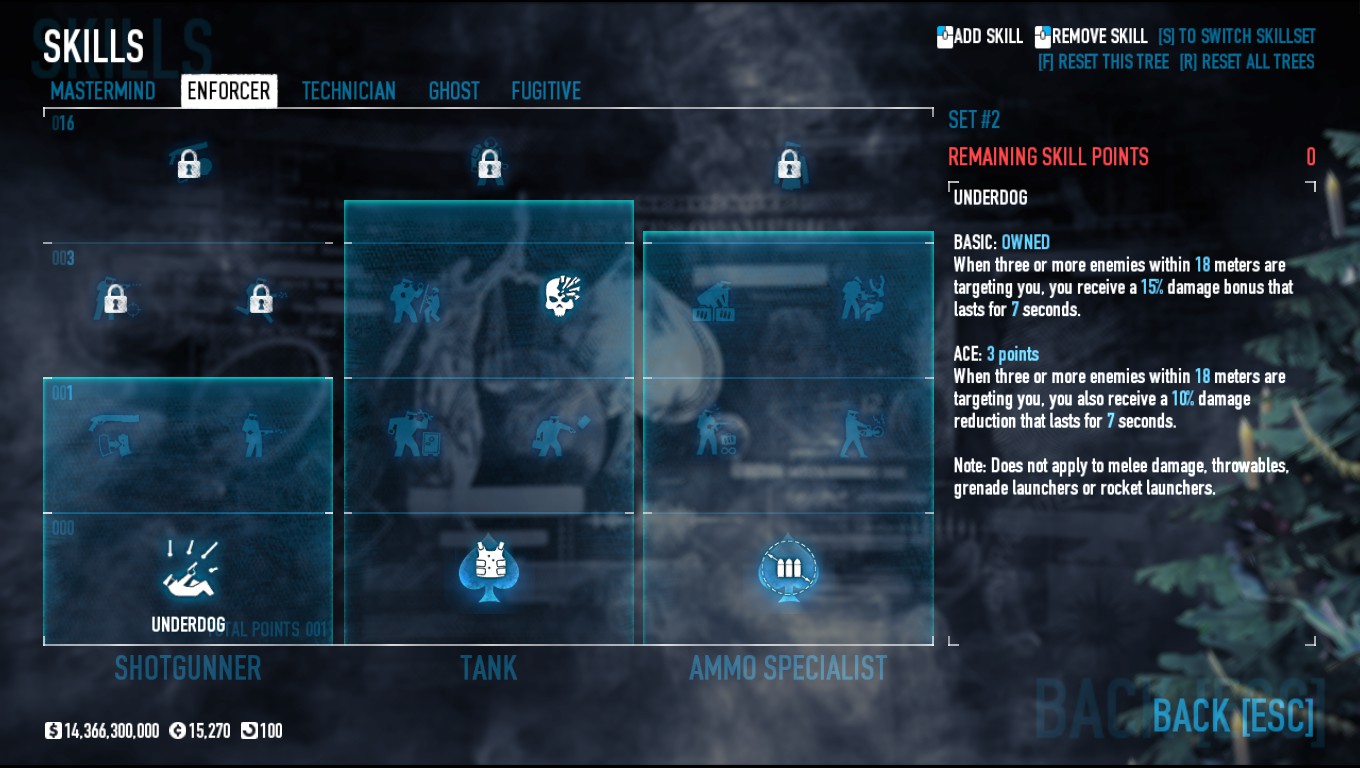 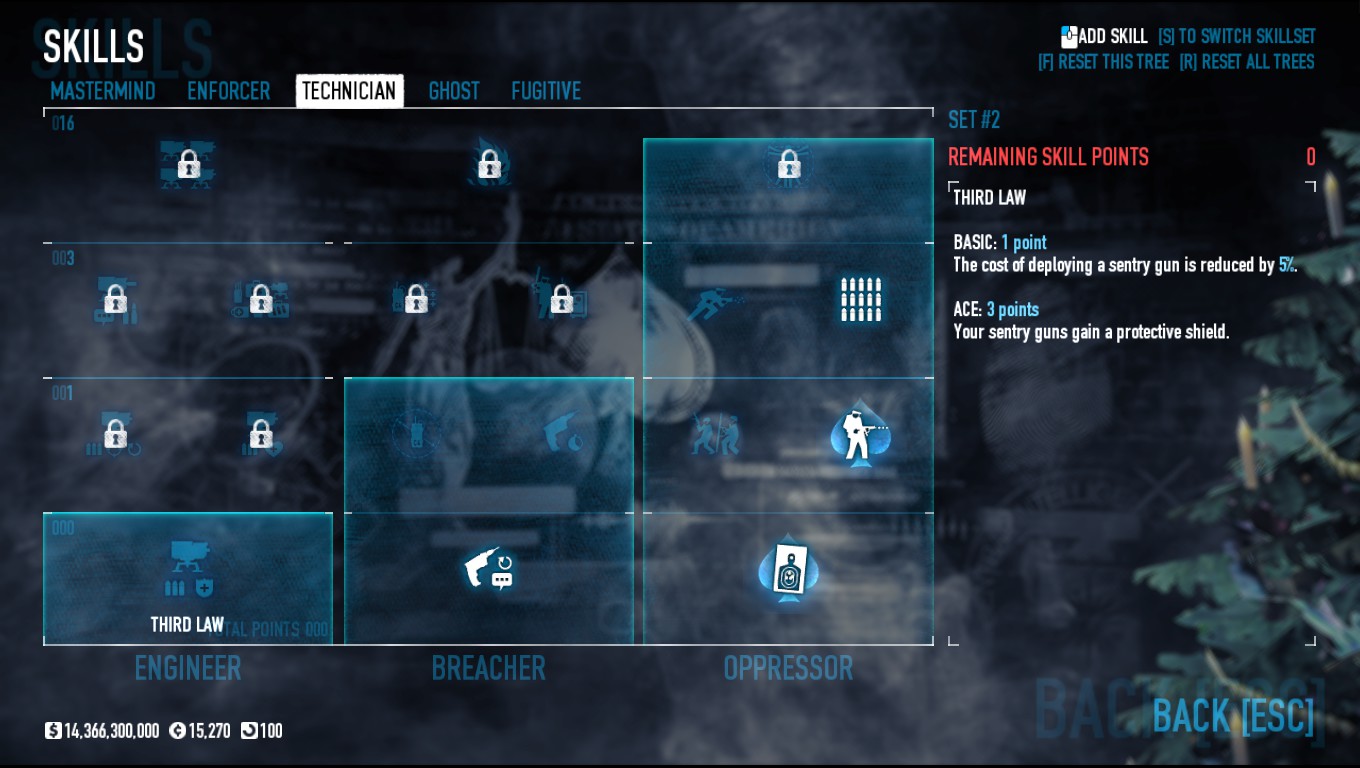 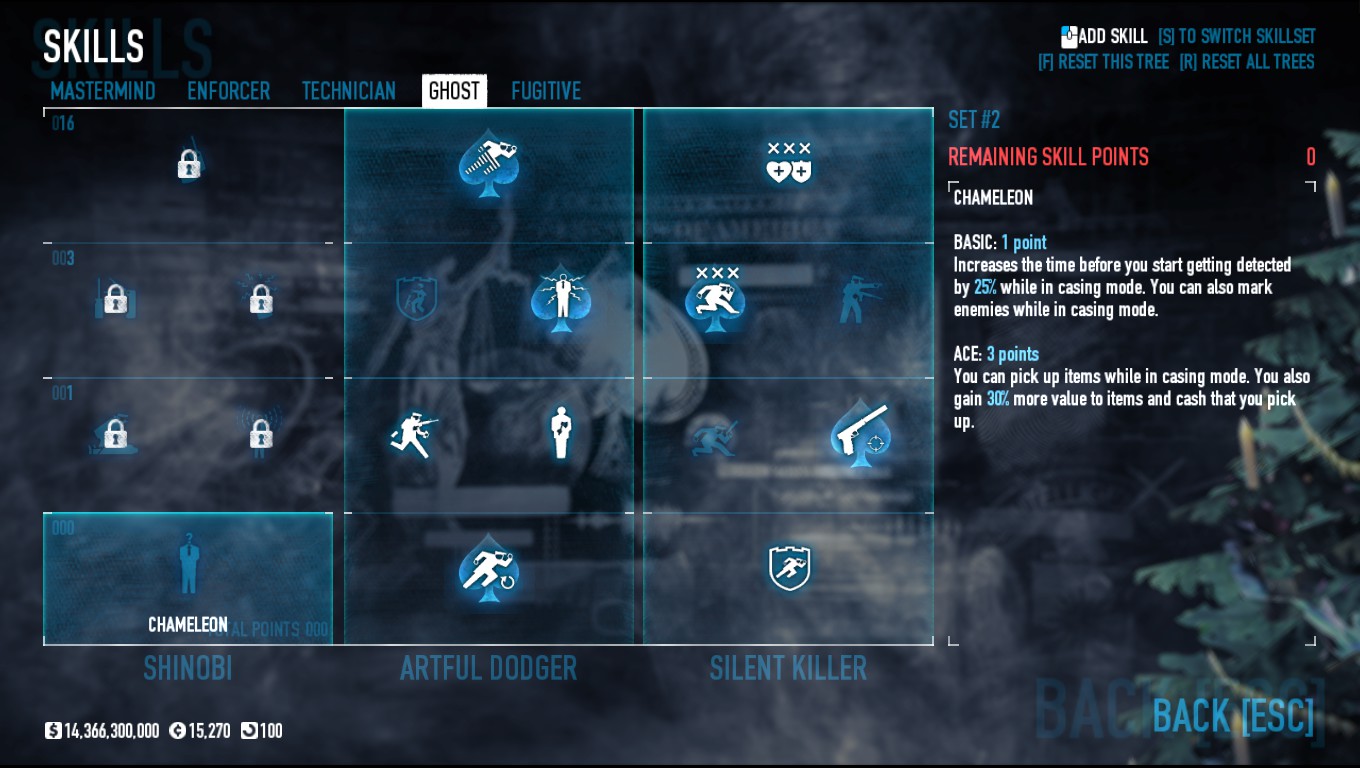 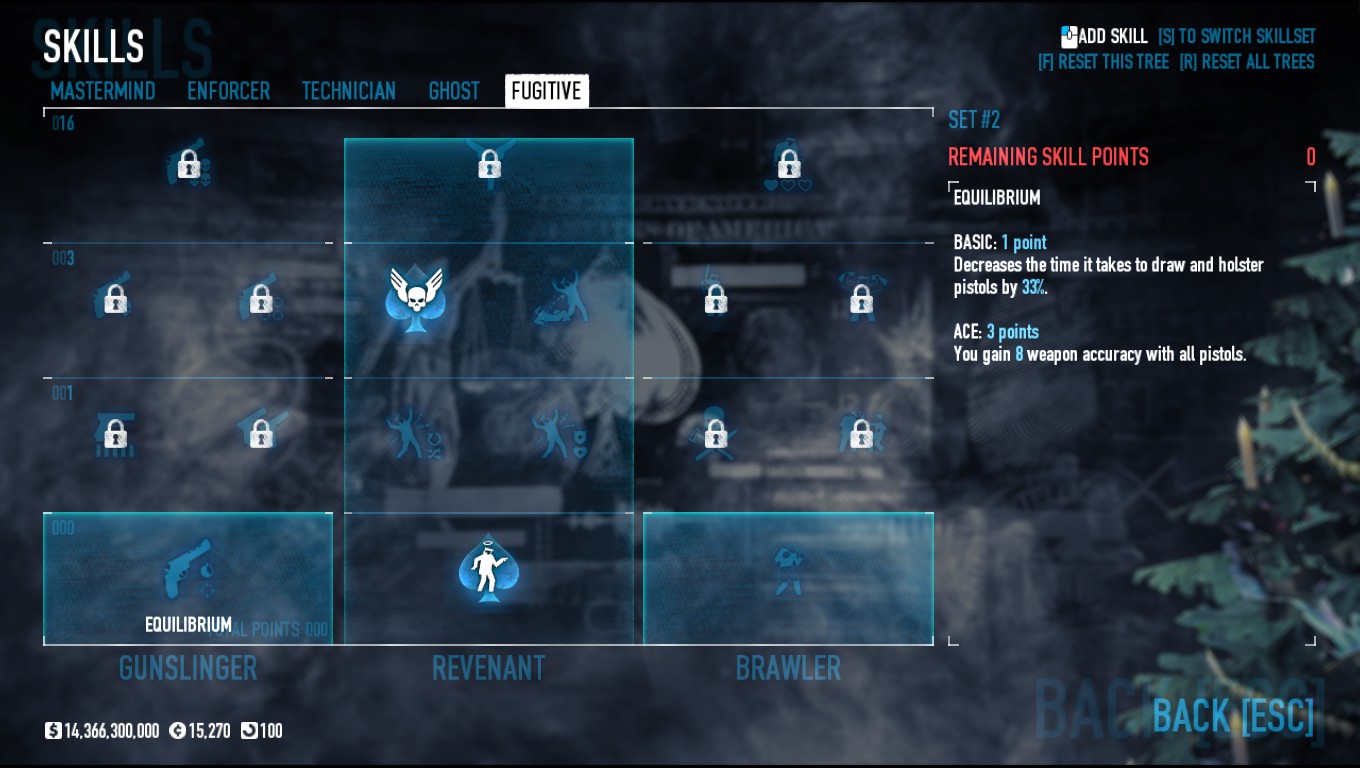 Saw: Concealment boost, any other mods of your choice

Mark 10: The Bigger The Better Suppressor, Concealment boost, Compact Laser Module (if you have the DLC)


Snowballs provide a solution to one of the dilemmas that saw builds face: how do you cover every enemy type when one of your weapon slots is sacrificed for the saw? The weapons that beat shields (grenade launchers, sniper rifles, flamethrowers) are ineffective against Bulldozers, so usually you would just use an ammo efficient, non-explosive/piercing weapon (like an AR/SMG/LMG), and grab the Shock and Awe skill aced for shields.


This build uses a crit SMG, but has snowballs for shield coverage instead of Shock and Awe. The crit SMG has decent ammo efficiency, but if you ever find yourself low, you can just start chucking snowballs. Or better yet, use snowballs liberally to scout; every time you guess right and hit an enemy that you didn’t know was there, it saves you some ammo from finishing them off.

The snowball is a fun throwable option, and opens up lots of unique, interesting new plays. It’s such a shame that it will be removed, so be sure to try it out while you can.


Thanks for reading this guide, and happy holidays.


Special thanks to Unknown Knight – [steamcommunity.com]  for the snowball properties.

I hope you enjoy the Guide we share about PAYDAY 2 – Snowball Throwable Gameplay; if you think we forget to add or we should add more information, please let us know via commenting below! See you soon!