Okri has once again something special for us. I’m sure you can complete those two challenges in the rng-fest that is Chaos Wastes with lucky lightning boons and thicc hordes but I prefer consistency. So, hopefully, here’s a helpful guide.

Into the Nest because it is a Skaven only map with Skaven slaves/clanrats having less HP and mass in comparison to Chaos guys. Champion difficulty because you want to be able to kill the bots at the beginning and still get quite some density.

For ‘Old-fashioned Learning’, you can try this solo but the bots tend to mess things up by killing mobs. For ‘Holy Warrior’ a second player is mandatory. You want to bring a second player mainly to kill the bots at the beginning because you can’t deal friendly fire with melee weapons. I’d recommend bringing an Elf with Moonfire Bow (infinite ammo).

Activate a deed with Send in the Next Wave modifier to reduce waiting time inbetween hordes in case you don’t get it. You can use the deed glitch – [steamcommunity.com]  that allows you to pick difficulty and map. It’s legit, it has been ‘sanctioned’ by Fatshark in the past by readding it to the game after it had been removed initially.

CRASH ALERT: As of patch 4.5, pressing TAB in the keep while a deed is active crashes the game 100%, take care!


For killing off bots, pick squishy careers with 100 HP base health and remove health/barkskin necklaces. 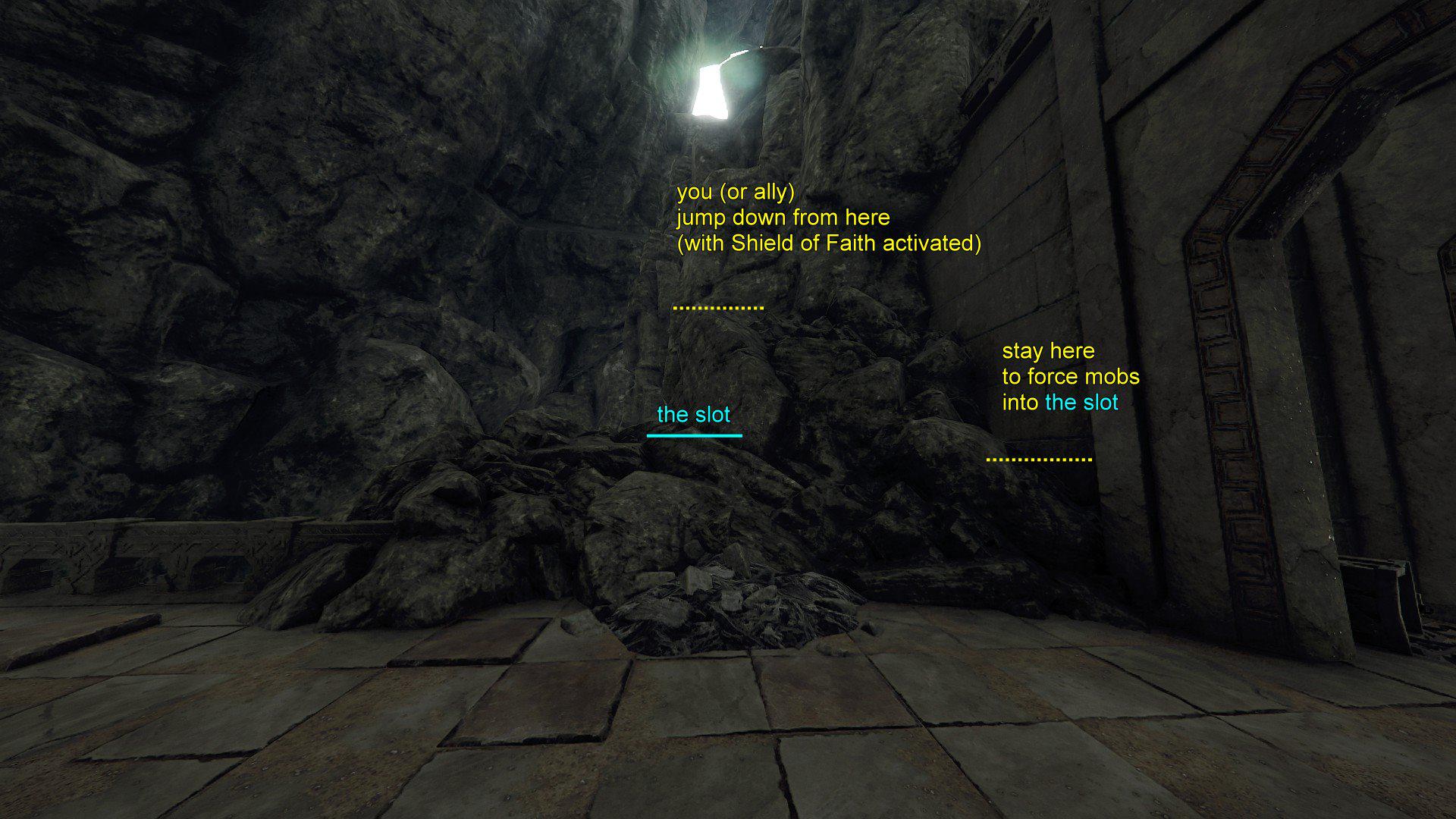 The basic idea is to force

. Ideally, we want to have an entire horde in one place. Kill off ambients around this location, especially elites. Elites are not allowed.


The location is right at the beginning of the map after you’ve went down the stairs with the light switch, on the right side before the first dropdown. All living players have to get up there on the rocks to avoid interference with aggro and how the game allocates mobs to the individual slots. If the mobs don’t walk to ‘the slot’ on their own, try pushing them back so that they might be forced inbetween slots and move, or try moving around a little. If they don’t line up just give it a try anyway, then rince repeat.


This is how it should work:

I already had the challenge unlocked so I didn’t get a confirmation in chat but this is the way my group did it three times successfully. Even though this is a very consistent strategy, it took us between three to four tries each time we tried it! So, it’s either a little bugged or actually very hard to pull off. It’s definitely not cumulative or a ‘per map’ thing, in my opinion. You have to ‘hit’ 60 enemies at once.


Also note that you don’t have to use Shield of Faith on yourself for the ‘Old-fashioned Learning’ challenge. According to challenge descriptions, Shield of Faith is only required for ‘Holy Warrior’.

You use the same setup and location as for ‘Old-fashioned Learning’. Wait for enough density, cast Shield of Faith on the second player and get the killing started.


According to the description, only melee attacks are allowed.


Pick the Unyielding Blessing talent in last row that increases Shield of Faith’s duration to 8 seconds. Note that a concentration potion lets you get a second activation of Shield of Faith while the first one is still active. So drink the potion first, cast Shield of Faith, wait, and cast it a second time on the same ally. This easily allows for a time window of ~14 seconds to get 50 kills.


I did this challenge four times so far and chose Shade with Spear as the ally to do it. The elf brings Moonbow to kill off bots easily, and Shade’s invisibility uptime (Cloak of Mist/Vanish) helps with crowd control so that the mobs don’t scatter from hyperdensity when the player drops down. Elven Spear push attacks have good cleave and are very fast; it helps to stack stamina on weapon and necklace to have multiple push attacks ready in quick succession.


You don’t need Shade to do this but bare in mind that you need a) a reliable/quick way to kill bots at the beginning with scarce ammo supply, and b) that you need a career with high melee killing potential. When you bunch mobs up like this, the density requires you to have good cleave attacks to get the most value out of it.

REMINDER: As with all challenges in the game, you still need to complete the map afterwards!

Hope you enjoy the Guide about Warhammer: Vermintide 2 – Old Fashioned Learning & Holy Warrior + Location Setup, if you think we should add extra information or forget something, please let us know via comment below, and we will do our best to fix or update as soon as possible!