Office Complex is the first chapter of Half-Life where players, especially beginners might have some considerable problems. This is mostly due to expansive environments, new hazards and enemies as well as relatively limited weapon arsenal. Since this has always been one of my favorite chapters, I felt eager to make this guide with the intent of teaching new players how to get through this dangerous section of the game which doesn’t provide you with that much options. Put your HEV suit on and pick up a crowbar ’cause this is gonna be wild!

“Office Complex” takes place in a large mixed-use complex consisting of offices, lounging areas, maintainance areas, ventilation shafts, numerous hallways and even a cafeteria! As its architectural style and various texture files suggest, this part of the facility was built in the 1950s, along with other sections of Sector D such as the High Security Storage and Rocket Test Launch Facility (you’re gonna see those later on…). The place itself might seem cozy and familiar at first: green carpets, blocky sofas, colorful vending machines, computers, calendars, lunch tables, restrooms… except it’s being infested with parasitic Headcrabs, adorable yet agressive Houndeyes and Vortigaunts creeping around corners. This entire chapter is characterized by dark shadows, damaged infrastracture, convoluted ventilation shafts as well as numerous secret areas. “Office Complex” is a dreadful experience reached quite early into the game. but despite its best efforts to frighten you and lower your morale, as long as you manage your health, ammo and keep alert of incoming enemies it shouldn’t be too much of a challenge. Now, here’s how you do it! 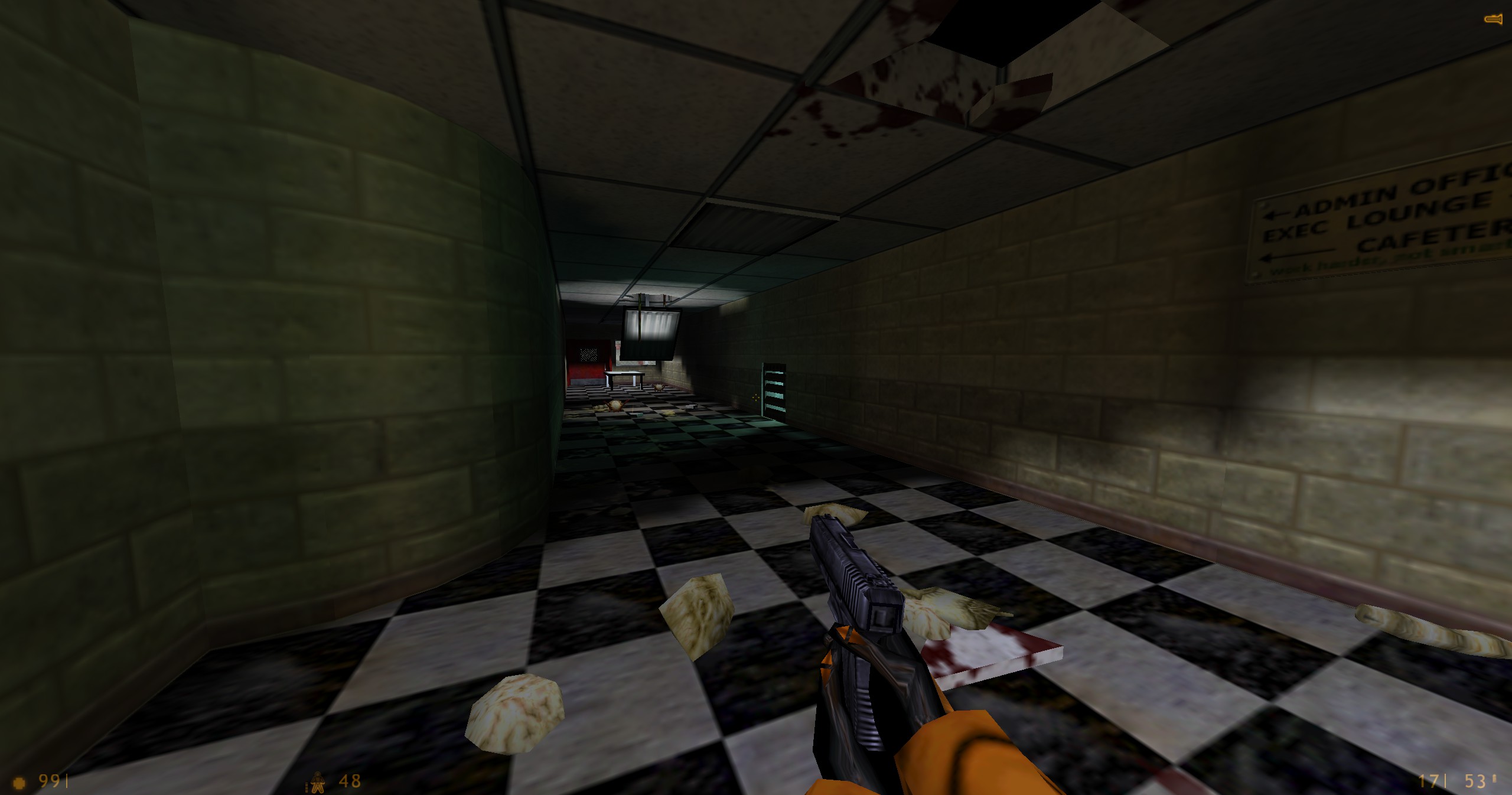 Alley seen at the beginning of the chapter

Right after you exit the ventilation shaft on your right, you’ll reach a room with 2 scientists in it. But, as soon as you progress towards the small room on the right, Barnacles (those things with sticky tongues that wanna eat you) will emerge as the ceiling tiles collapse. Barnacles will grab the scientists and kill them after a couple of seconds. You can always save the scientists by shooting the creature with your pistol, but it isn’t necessary. After getting past the Barnacles you have to turn off the power in order to avoid getting electrocuted in the hallway seen earlier. 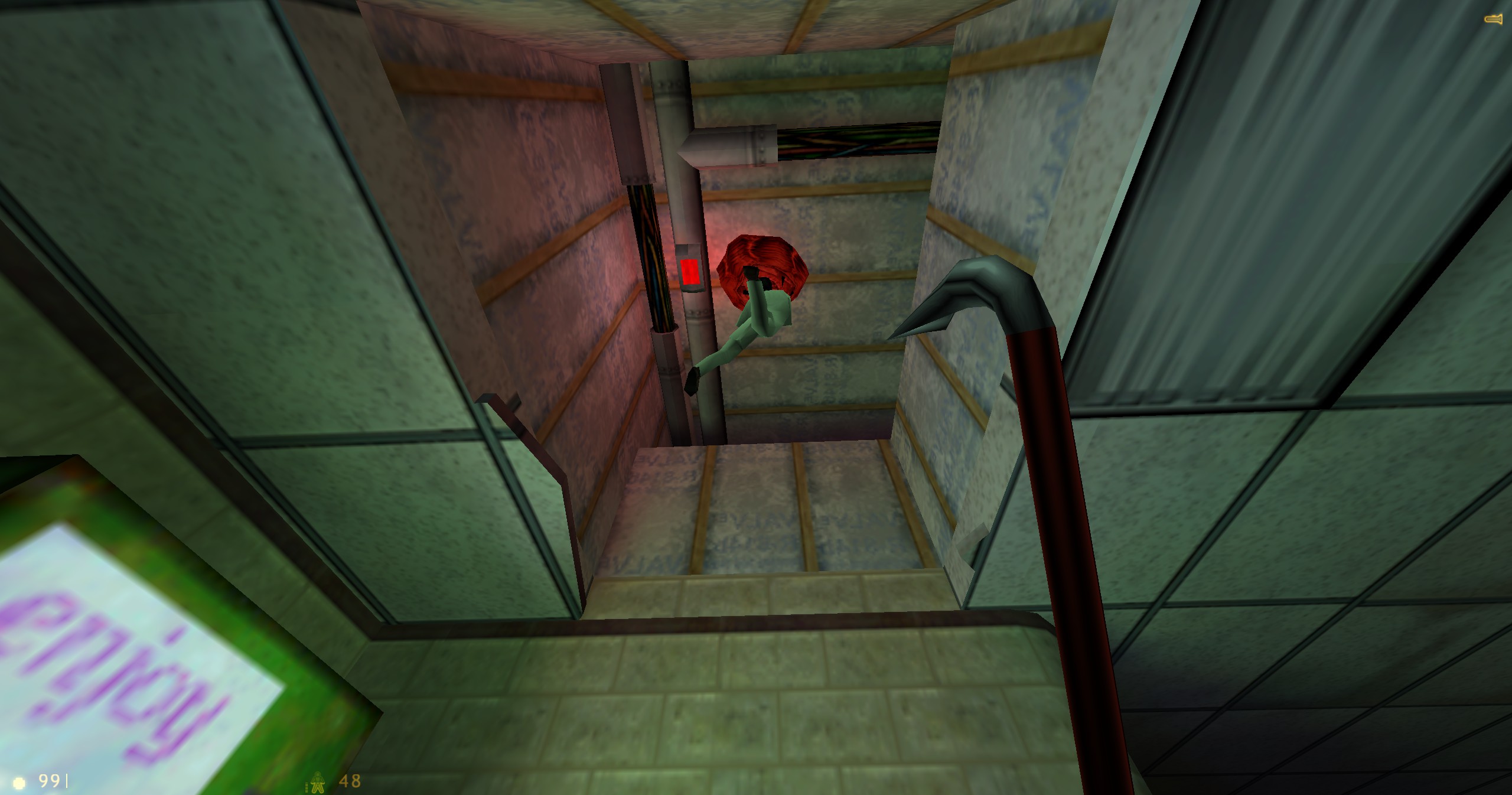 Scientist getting munched by the Barnacle

After escaping the flooded office and reaching a new area, you’ll see a room with doors shut. If you wait a few seconds, Zombie hiding inside the room will start tearing apart the doors, eventually destroying them. Wait for the sequence to end as you can’t destroy the doors with your crowbar or pistol. After killing the Zombie, you’ll find 2 clips of pistol ammo on the shelf. Grab it for later use. Trust me, you’re gonna need it. 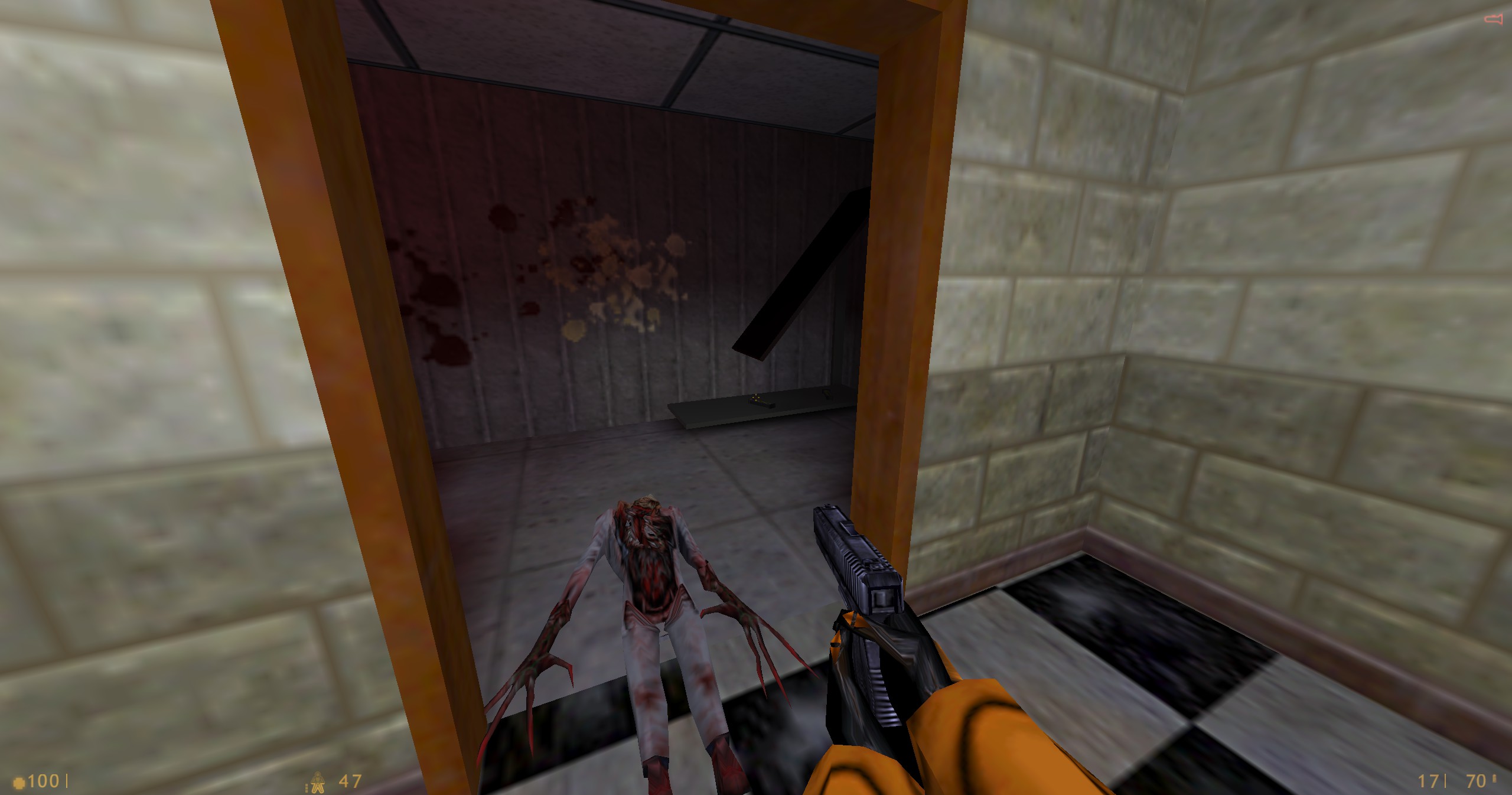 Zombie laying dead on the floor

Near the room with pistol ammo, you’ll see a corridor filled with crates. Pick up your crowbar and demolate the smaller crates in order to progress further. After a loading screen, you’ll find a Franchi SPAS-12 assault shotgun lying on the crate. If you kill the Zombie that approaches the nearby Security Officer, you’ll be granted to a small chamber with 2 boxes of shotgun ammo as well as some pistol ammo lying on the desk. Be careful ’cause there’s gonna be a Headcrab dropping from the vent! Don’t be impatient with your new weapon; use your crowbar or a pistol to finish off the pest. Under the platfrom where you previously got your shotgun there’s a few crates with medkits and batteries in them. Smash them open if you’re missing some health. 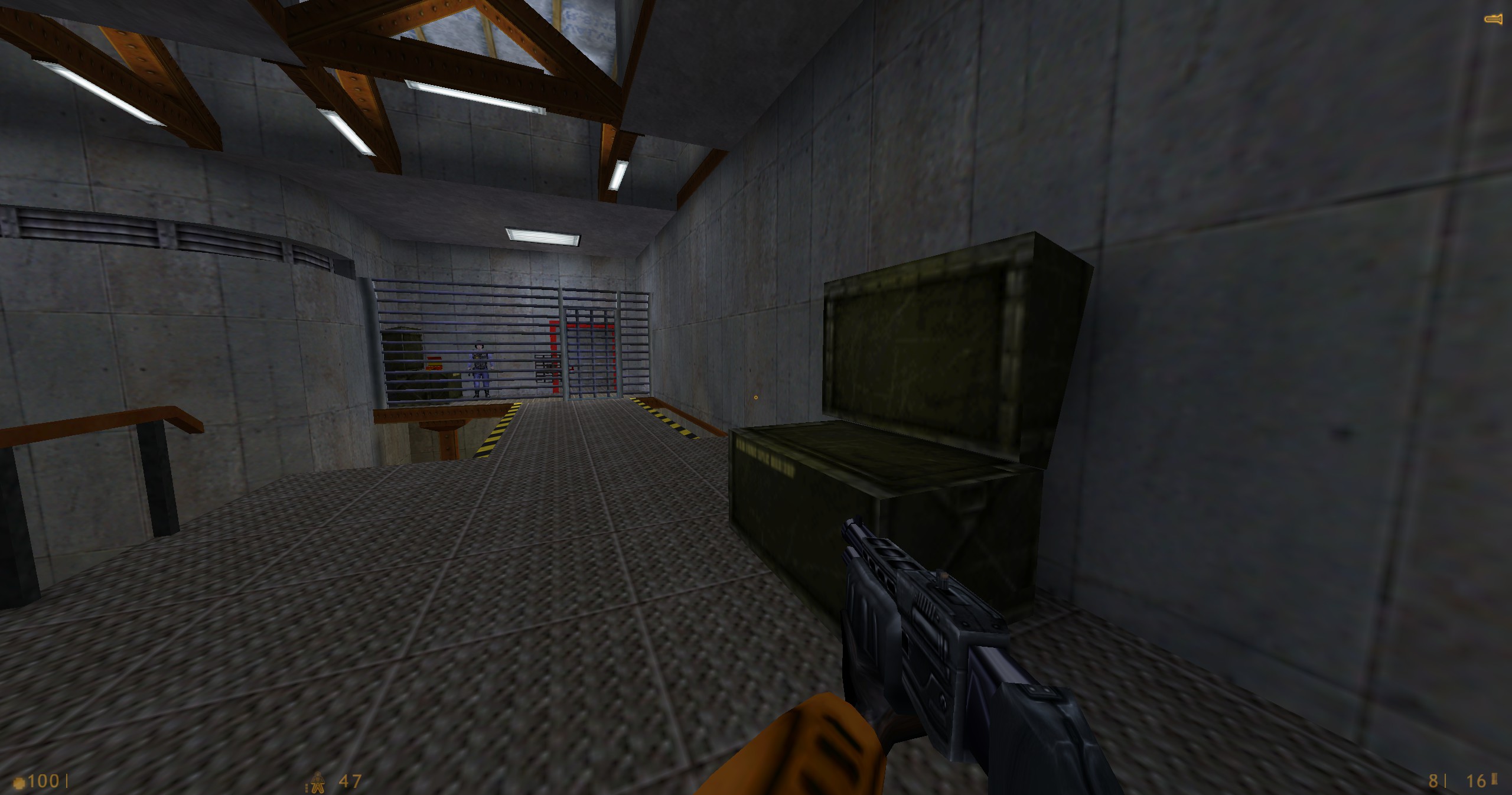 After climbing up the ladder seen in the hallway right before the ammo room, you’ll soon reach a vent which leads to a small storage room. Nice, supplies! Not this time ’cause this room is secured by ceiling turret shooting everything in its path, in this case an approaching scientist and even you. Use the crates for cover and make your way to the power lock under the platform; after turning off the power, the turret will shut off. Under the turret is health station which you can use to recover some health. Behind the storage is a room with more shotgun and pistol ammo, so take care of that. If you proceed to the left be careful ’cause there’s gonna be a horde of Headcrabs hiding behind the corner. Use your pistol or even better get the guard seen earlier to help you out. After you climb the staircase, there’s gonna be another guard shooting Headcrab. These guards are here for a reason and you’re gonna see why. 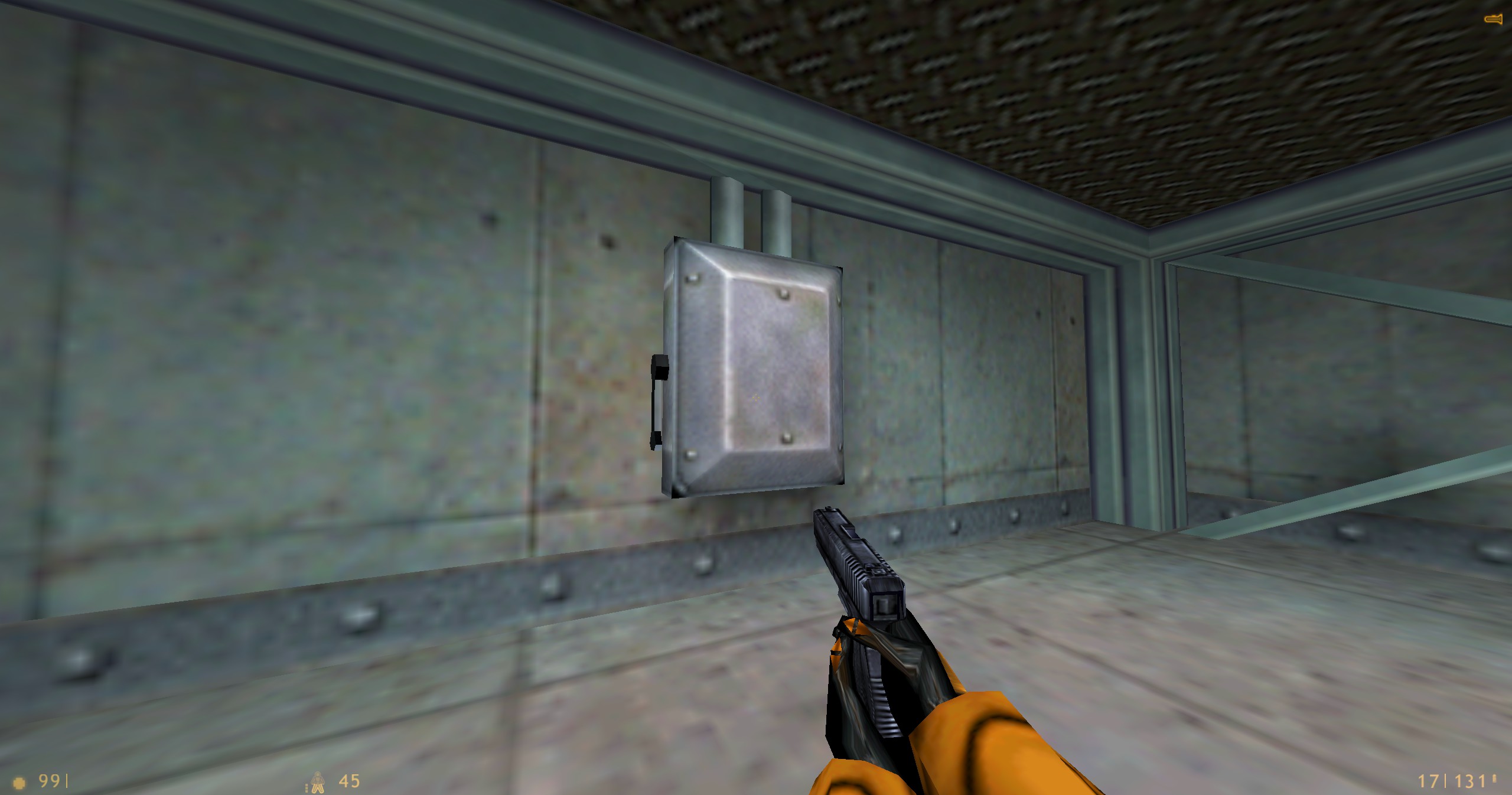 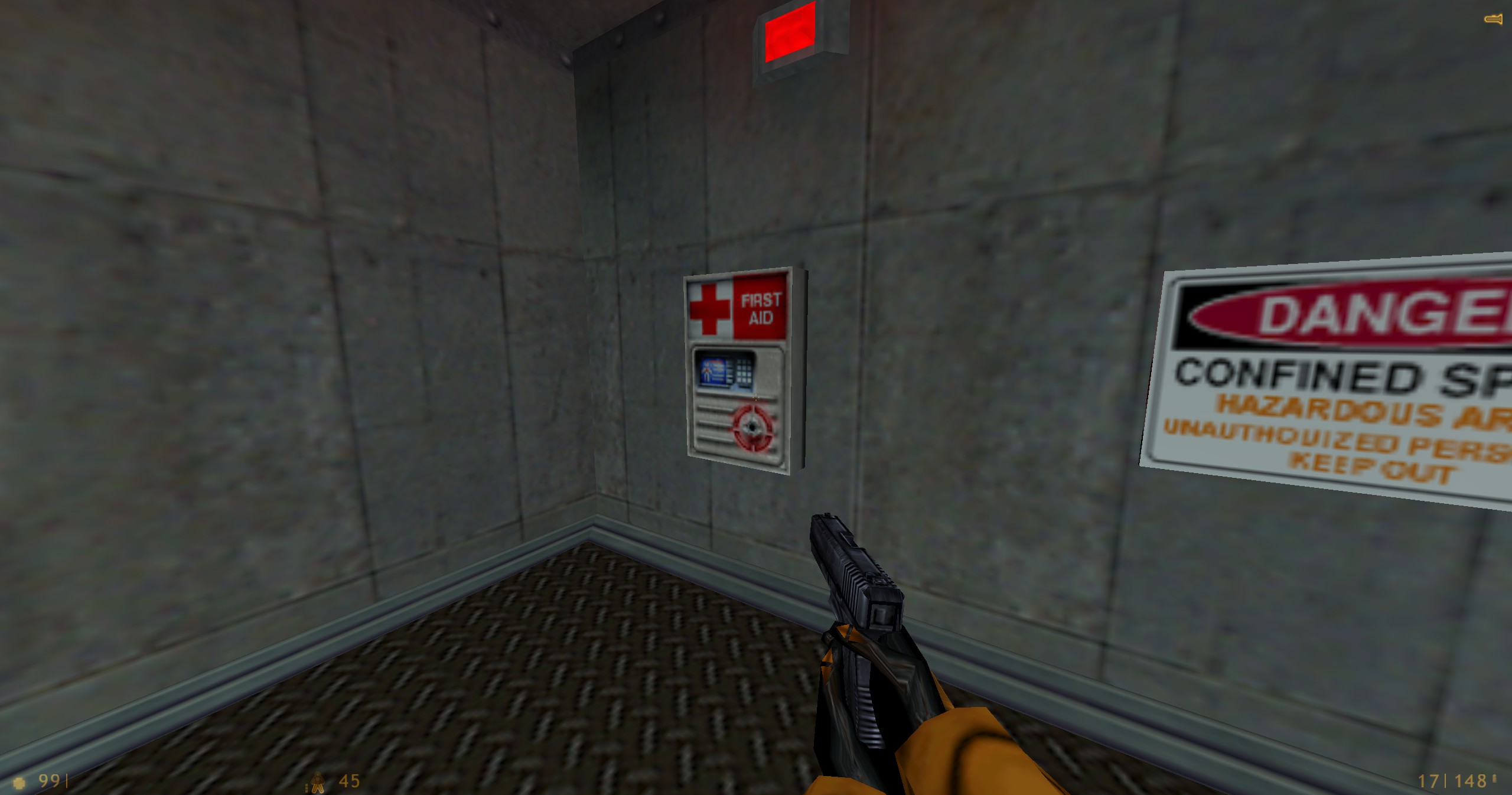 Health station which can be used to regain health

After being jumpscared by a Headcrab dropping from the ceiling, you’ll reach another office area. Before moving on, head to the room on your left and pick up some health and suit power. After powering up your suit make sure to pull out your shotgun and proceed further, but very slowly. On your left there’s gonna be a Vortigaunt creeping around the corner. Shoot it immediately and retreat to the previous room, ’cause there’s gonna be more Vortigaunts attacking you. After avoiding their lighting attacks, move to the right and into the room before you. There’s gonna be another Vortigaunt around the corner so make sure to kill it. Soon after another Vortigaunt’s gonna break open the doors and attack you, but you can kill it easily. In the room where it spawned you’ll find some more pistol ammo. Fun fact: even though the calendar displays “December”, it’s confirmed that Half-Life takes place in May. After picking up the ammo you can visit the hallway right behind you, but first kill the Vortigaunt and the Barnacle blocking the doorway. This room contains a scientist and a single medkit, use it if necessary. Return to your previous location and continue to the vending machines, again there’s gonna be Vortigaunts awating you. Those fellas really like creeping around corners… 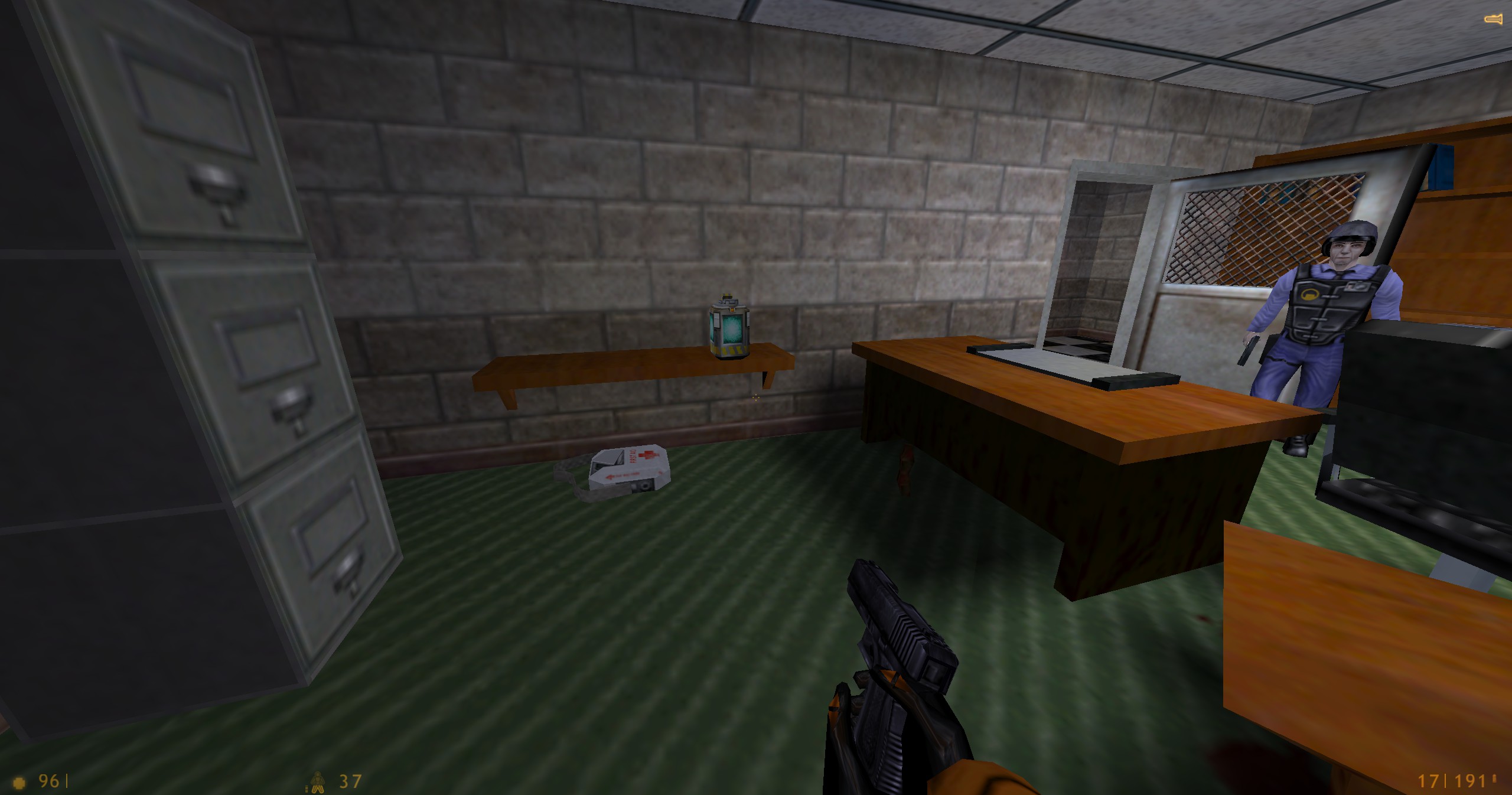 The room with a medkit and suit battery 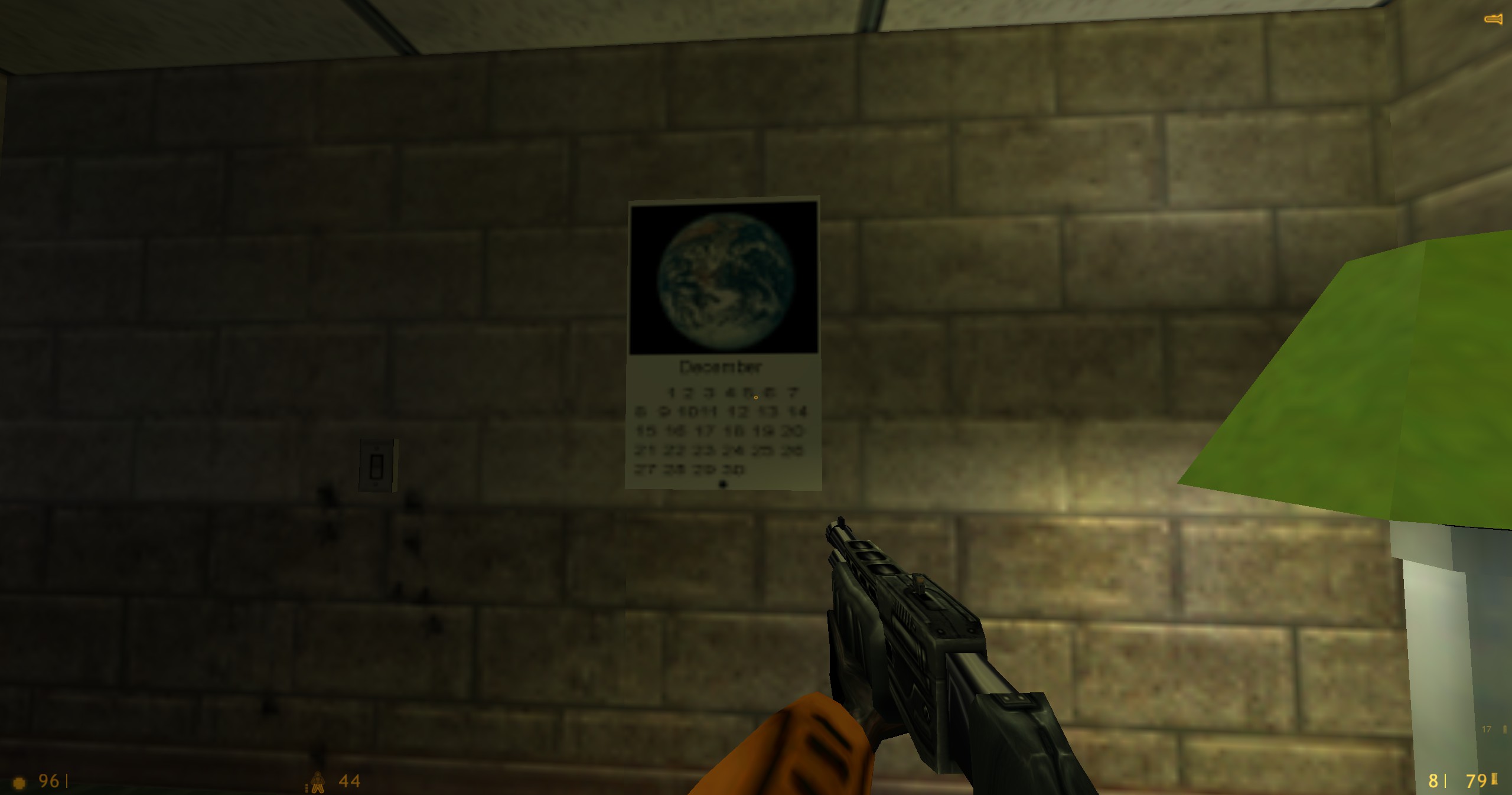 Calendar seen on the left wall

After climbing up the staircase and escaping another ceiling turret which this time can’t be turned off, you’ll reach a small storage area with a Security Officer guarding it. There’s a also a health station to recover some health. If you proceed down the ramp and then turn right, you’ll be attacked by a Bullsquid which was previously hiding behind the crates. Use your shotgun to fend of the creature. After clearing the area, you’ll find some grenades laid on the green crate in a similar fashion as the shotgun obtained earlier. If you turn around and head back to the ramp, more Vortigaunts will teleport into the area. You can kill them with the shotgun, or if you insist you can use the newly obtained grenades. After heading to the hallway next to the officer, you’re gonna face 2 more Vortigaunts before you reach a new area. 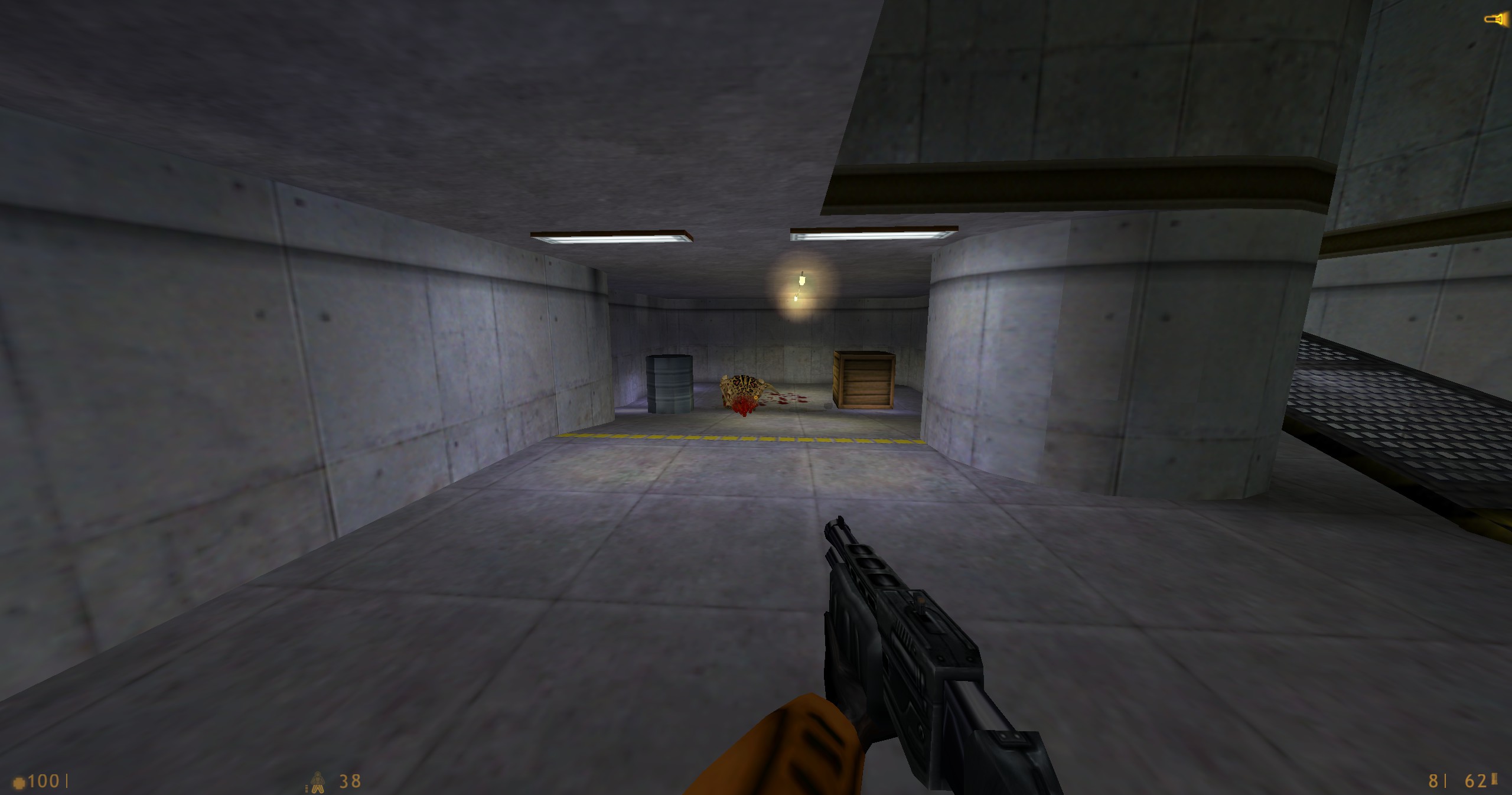 Bullsquid charging at the player

Right after exiting the hallway, you’ll reach the cafeteria. There’ll be Zombies ironically feasting on the dead scientists. Zombies themsleves won’t react, but if you pass a certain area Headcrabs will drop from the ceiling and attack you. In order to avoid this, pull out a grenade and throw it at the barricaded entrance. After destructing the barricade, move to the far left side of the safety ledge and jump over it, then get through the entrance and into the next area as fast as you can. At the end of the hallway you’ll find more Zombies feasting on dead scientists. There’s a health station behind them, but you most likely won’t need it considering the trick you performed earlier. Pull the lever on the wall and enter the freezer. After some more chaos and supply gathering, you make it to the ventilation shaft. 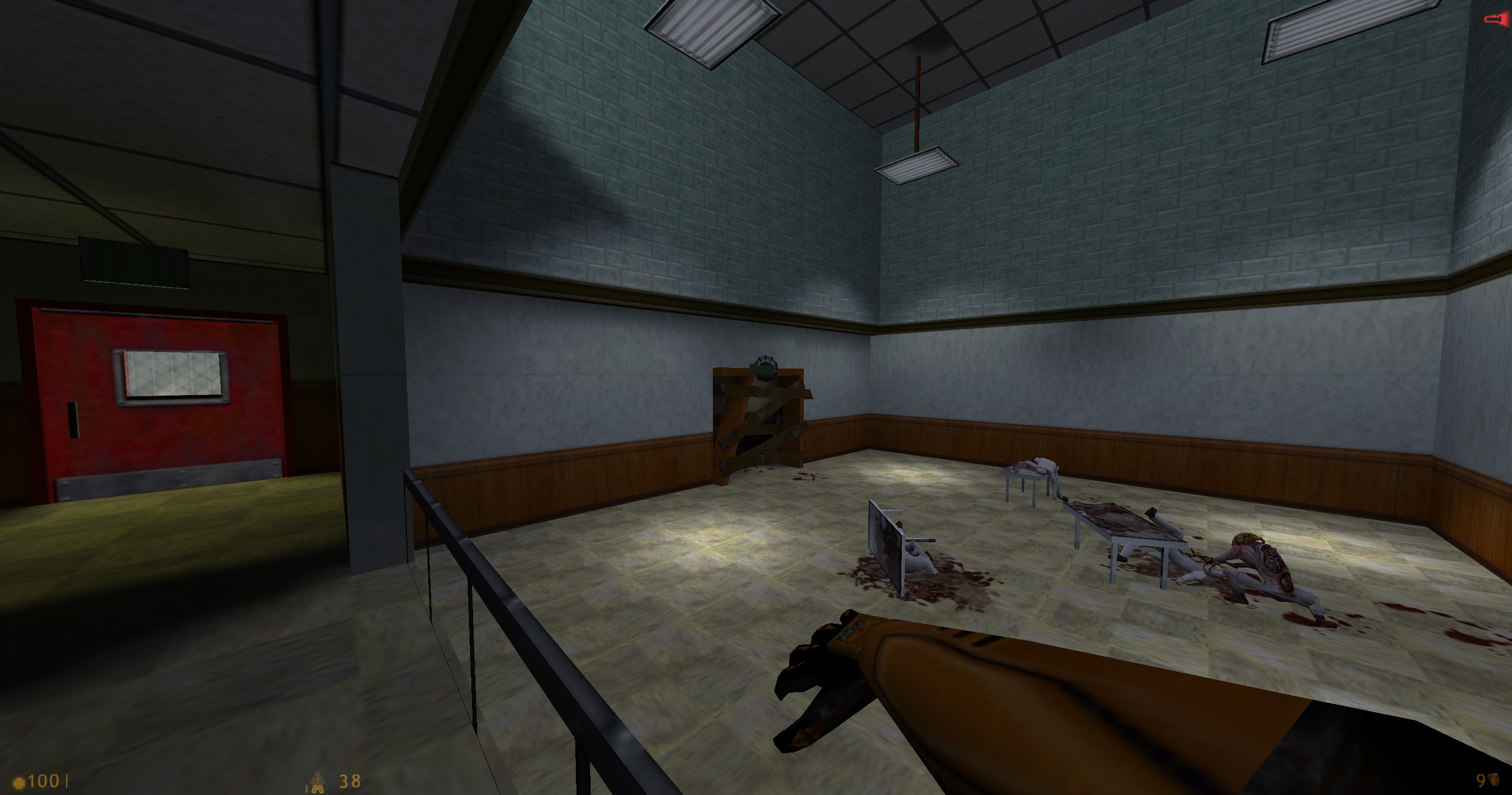 Player throwing a grenade at the barricade 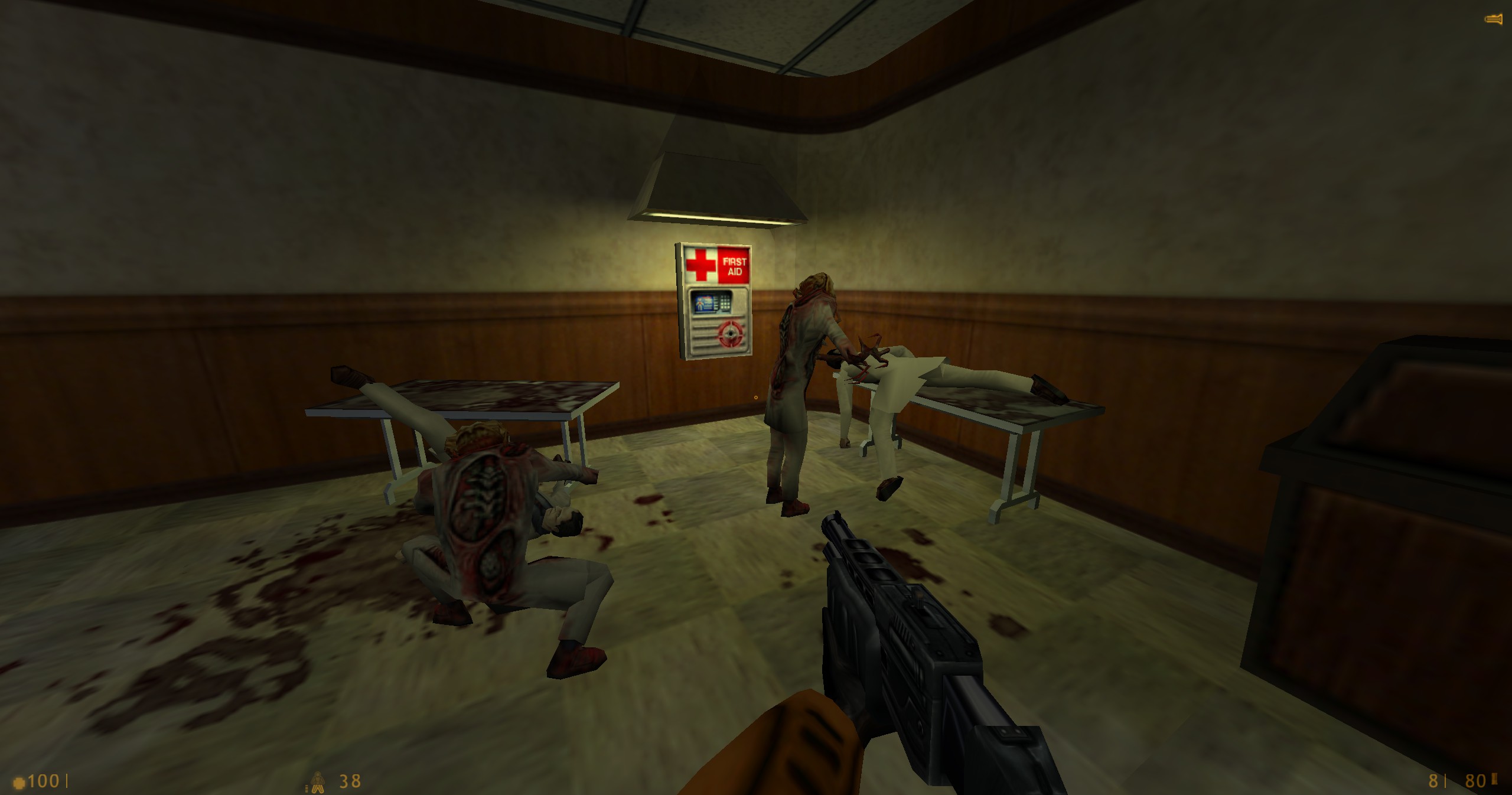 Zombies feasting on the dead scientists

After exiting the ventilation shaft, you’ll witness a Security Officer helping an injuired co-worker. After climbing up another staircase, you’ll be greeted by 2 Zombies; 1 emerging from the wall and another falling from the balcony. After killing the Zombies get into the small room where the first Zombie emerged from. There you’ll find a couple of grenades and a dead Security Officer. Then get to the other room to your left. In this room you’ll find 2 boxes of shotgun ammo as well as 2 medkits. Nice! After picking up the necessary supplies sprint to the elevator shaft and then jump onto the yellow ladder. Climb up the ladders untill you reach the elevator. After exiting the elevator, you’ll start the next chapter – “We’ve got hostiles!”. 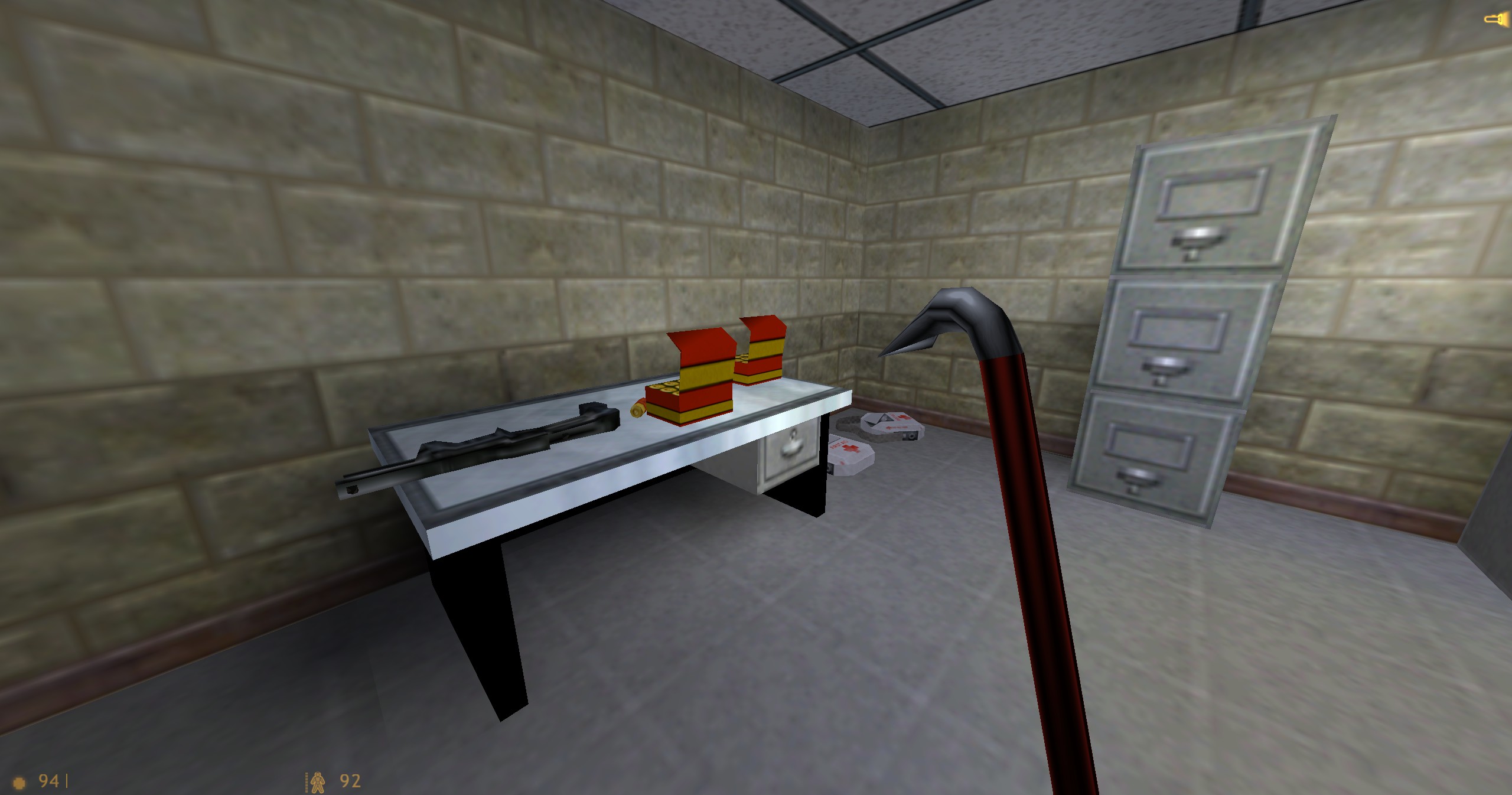 Supplies lying on the desk

Thank you for reading my guide, I hope it was very helpful to you! Half-Life is a game full of quirks and challenges, if you have any issue feel free to ask me for some advice! Good luck, have fun!

Hope you enjoy the Guide about Half-Life – Guide for beginners: Office Complex, if you think we should add extra information or forget something, please let us know via comment below, and we will do our best to fix or update as soon as possible!