This guide covers how you can abuse an in game mechanic to effectively ignore block damage, what i call shifted centrally armored design

Breakdown of the mechanic

Avorion has a built in protection for all ships that prevents parts of your ships from being shot off prematurely. This is I suspect to allow greater artistic freedom without fearing thin ship design to be too heavily punished by being fragile.

Now hold on I hear you say, Lots of thin parts of my ships can break off easily! Got antennas on the ship? Those are usually the first things to drop.
This is true. Low health parts by themselves are extremely easy to shoot off or break off from collisions. But it is not what I am referring to.

Ever shot at an enemy ship that’s ridiculously thin? Ever tried to cut that ship in half but no matter what you do, you can’t? At least not while the ship is alive?
That is the mechanic I am referring to.

I can hear once again you point out that’s what integrity field is for, but alas, integrity field increases health of parts and reduces damage, but it is not responsible for what I am describing.

So how does this mechanic work?

Basically if any part of your ship is dangling on a single part, that part now effectively gains the hp of all parts that relies on it. In order for you to break the part and sever the portion of your ship, you need to do at least as much damage to that one part as the parts that would be severed. 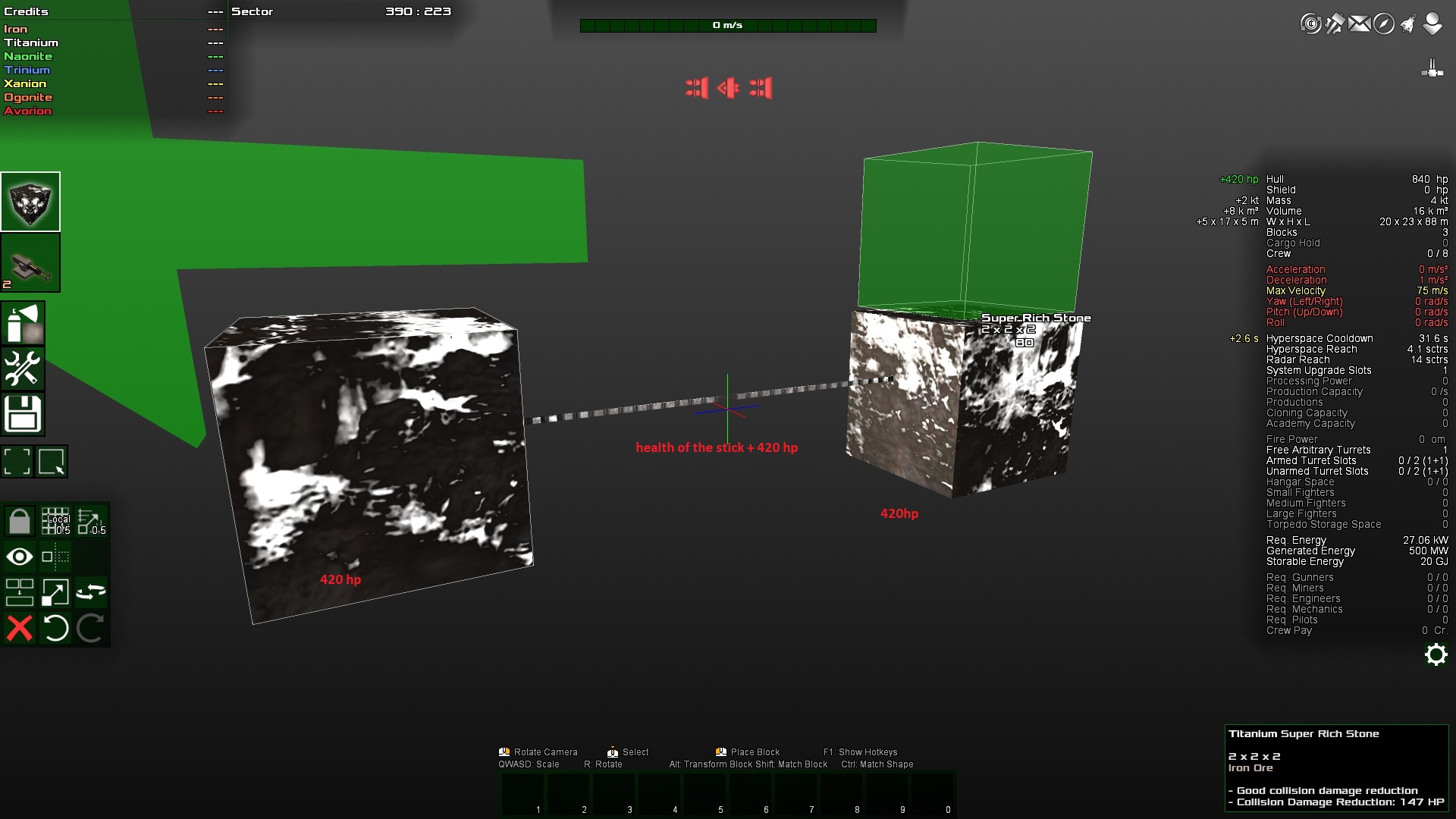 Here’s an example. The rod holding two big chunks of health is very thin. However if you were to break it off, you would need to do as much damage to the rod as the big stone block that would fall off when the rod does break.

Note that ANY additional ways the two blocks are connected and thus no longer relying on the rod to stay connected would nullify the effect until all other connections are shot off. 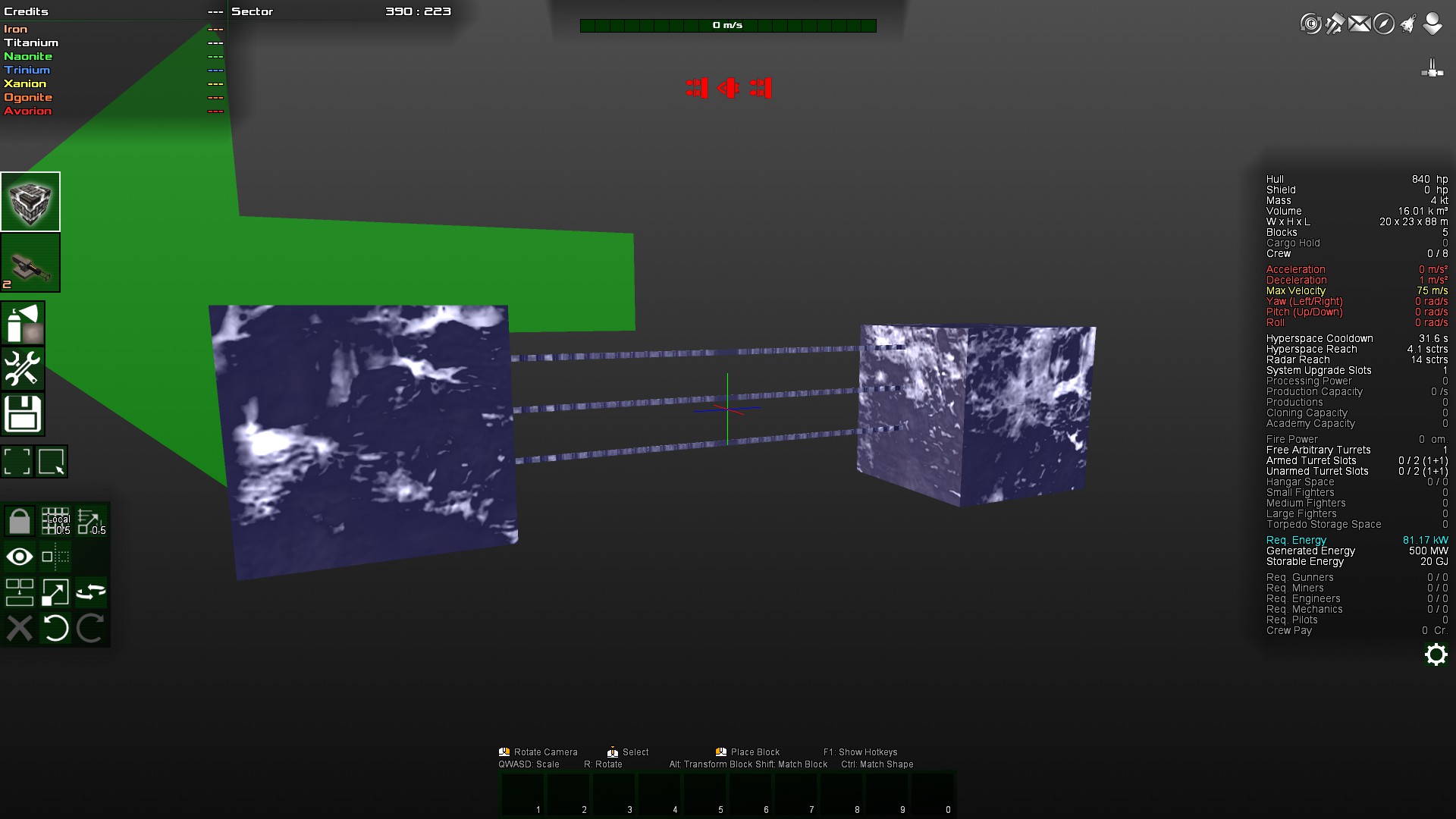 For instance, now it is connected together with 3 rods. Logically speaking, this should be a stronger set up, but due to this mechanic, the first 2 rods to be destroyed do not benefit from this arrangement and can be easily destroyed. The final rod, the one where the stone block would eventually rely upon, would benefit. 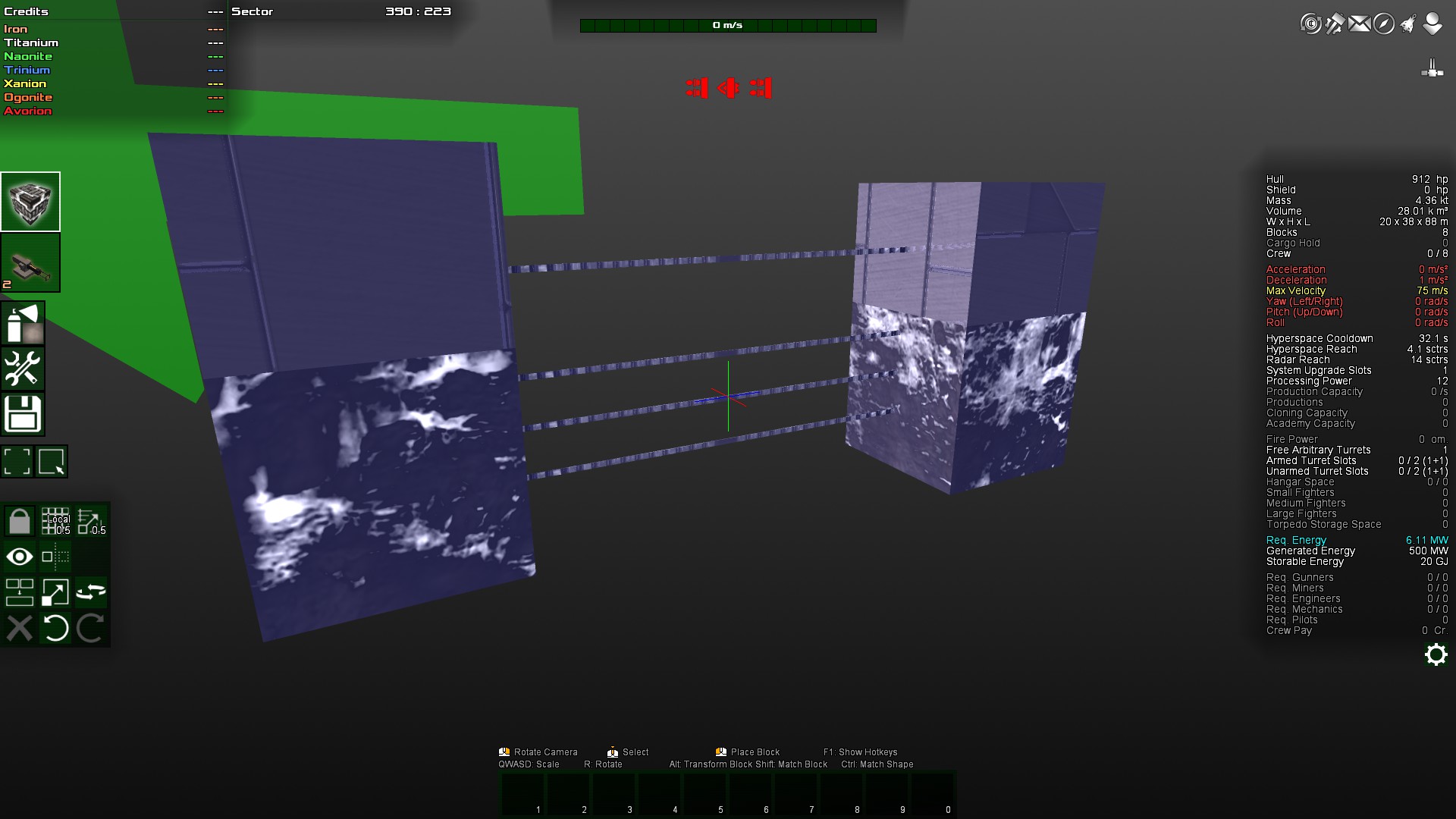 Furthermore, the connections to one another do not have to be immediate to count. So in this instance, despite being connected at the hull blocks, the hull connection would still connect the stone blocks, and thus now the first 3 rods can be shot off easily.

That’s all there is to this mechanic. Next I’ll show you how this benefits you.

So how does this affect you? Well in many ways actually. But first let’s get to some very simple examples. 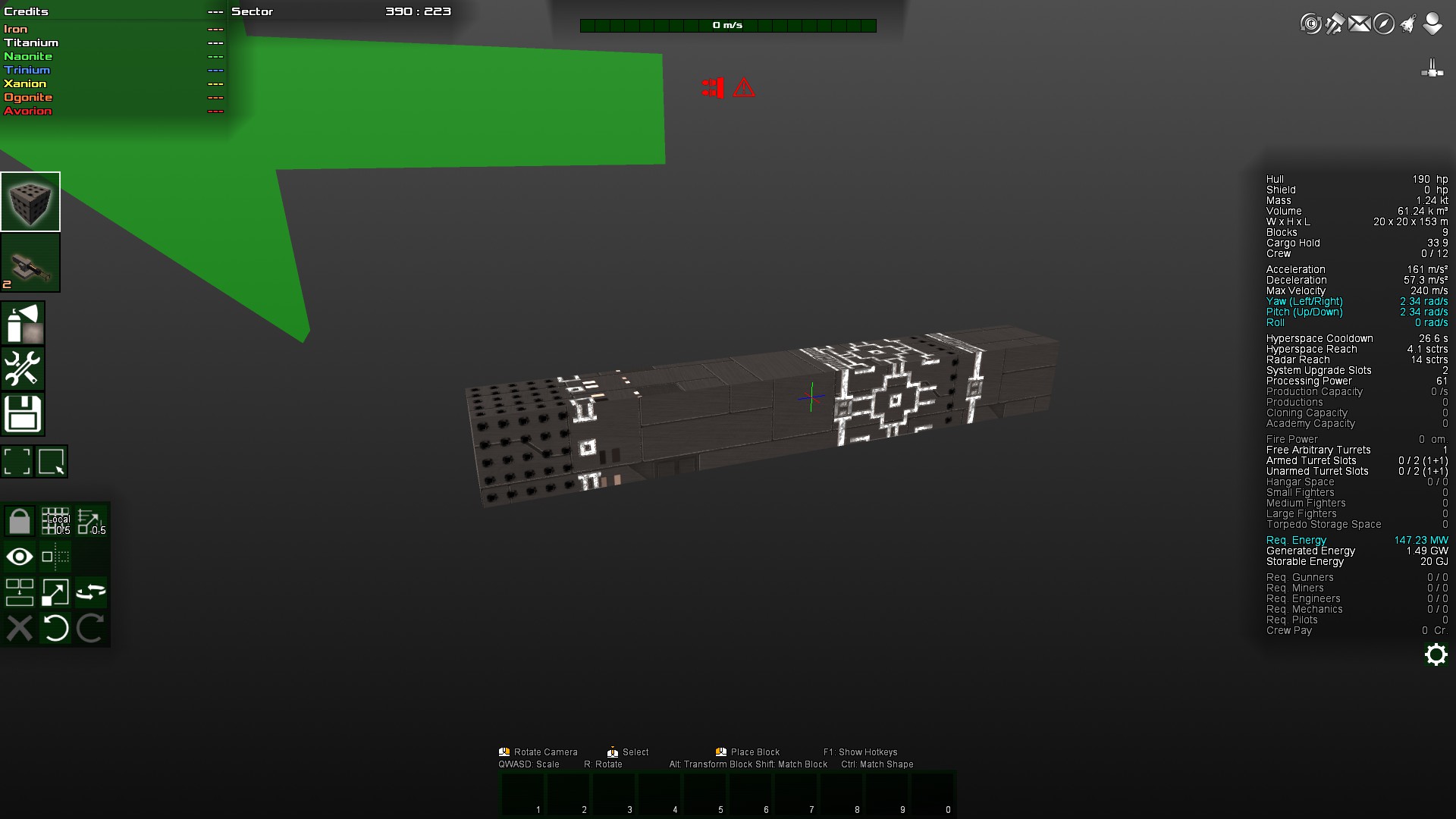 To bring the point home, this ship is made of blocks stacked one behind the other. It is effectively just a stick. And so shooting the middle will not destroy the middle until you’ve dealt enough damage to also destroy one of the halves that would be destroyed.

I’m sure the more astute among you would pick up that the ends wouldn’t be protected by this mechanic since nothing would be severed from their loss. You’d be absolutely correct. And thus the next logical step is to make the ends of this stick durable. Now that the ends are made of armor blocks made of 375hp, trying to destroy any part in the middle of the chain, no matter how fragile, would need to receive at least 375 damage. When you factor in integrity fields, you would need to do at least 3750 damage, after of the 3/4 reduction. Note that the ship only has 943hp. This effectively means that nothing on your ship can be shot off before your entire ship is destroyed.

Voila, that is the simplest example of how one can abuse this mechanic. Is it fair? I’ll touch on that at a later chapter.

Now I hear you say, armor blocks at the ends make the angular inertia absolutely massive and would make the ship behave terribly. Once again, you are right. But it doesn’t have to be this way. After all, a stick can bend, and still be a stick, can it not? This effectively works identically to above. But do be careful when you do this. When you have blocks jointed like this, the corners and edges where they meet, count as connected. As you can see, that corner block is made redundant as the diagonal blocks actually are connected to one another. As such, the corner block would be easily shot off as it is not protected by the mechanic. When in doubt, try deleting the block in safe mode. If you can, then it is not a necessary part of the connection and thus counts as a separate connection that’s not part of the stick, thus can be destroyed with ease.

Moving on, having both armor blocks in front is still not good. What would be more ideal is if the armor blocks are in the middle of the ship, where they have the least amount of angular inertia. 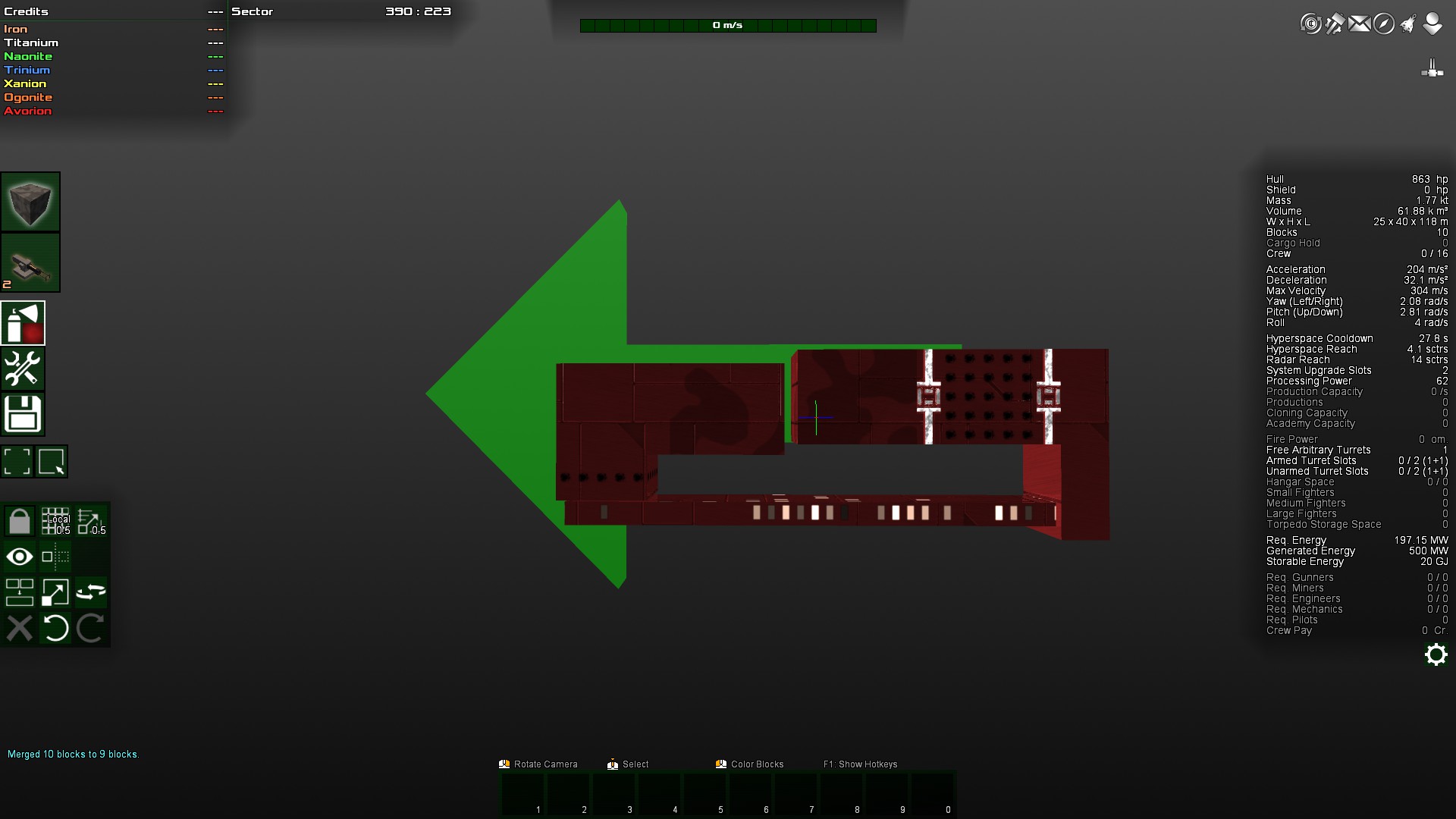 This is where the SCA comes in. I coined it as Shifted Centrally Armored when i developed this building method.

Instead of armoring the outside to be able to withstand damage, you can put the armor in the middle. This is still a stick, in that there’s only one connection going from one end to the other. It is just… bent… inwards.

This preserves the maximum mobility, yet your parts are impossible to be shot off(with integrity field) since they inherit the health of all blocks that rely on it, and with integrity field, the armor alone yields more health than the entire ship combined.

Note that weapons like rail and cannons still do their thing. Rails for example even if they cannot destroy the blocks, they can still hit several layers of blocks, so armoring the exterior is still a good idea, you simply now only need to armor with the thinnest possible wafer. As long as your armor is also part of this long stick. This craft shows the absolute most basic form of this application. Note the armor in front for collision resistance, and at the back, notice the thruster is shrunken ever so slightly so as to not touch the armor block, to keep the engine a needed block for this chain to avoid the issue shown in the previous chapter.

Let’s get a bit more complex. 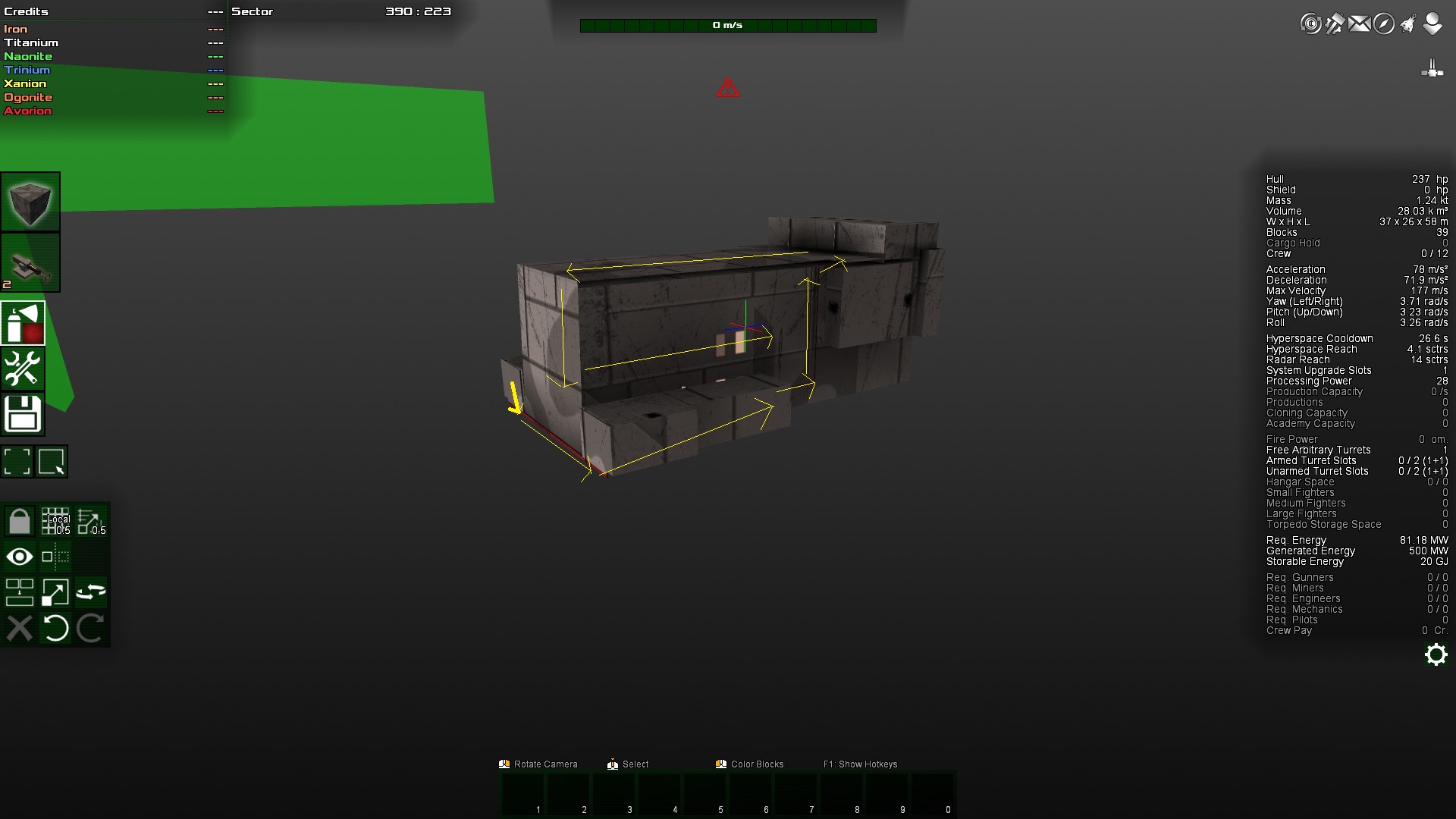 As you can see, this ship is really just like before, a really long stick.

To verify that you’ve built it correctly, try deleting a block from the ship out of safe mode. 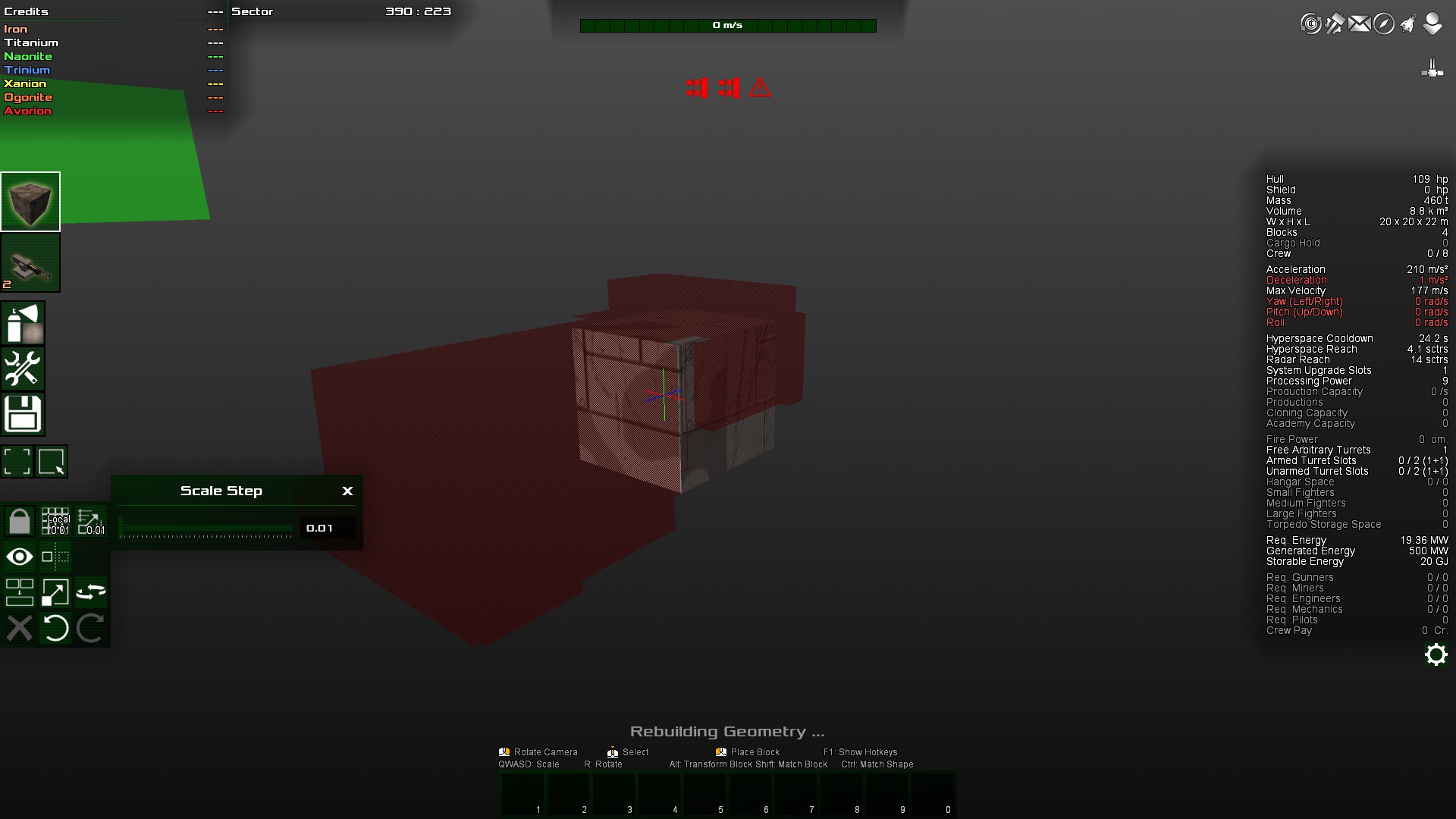 It should end up looking like this. Where you’ve lost everything that connects to one of the ends. If you only lose the block you delete, or far fewer than you are supposed to, then you have redundant connections somewhere and it needs to be fixed else the design doesn’t work correctly.

We can of course get more complex.

Here are some of the ships I have made with this principle:

Note that some of my other SCA designs not listed here while they utilise this principle, they are made of several sticks and several sets of armor blocks. This is less efficient and is largely superceded by the single stick method.

Feel free to study how I’ve built these ships. Or test them in higher difficulties.

Collision damage puts a bit of a twist to this method. It seems that when you hit something, the part that collides will determine if the entire chain of blocks is affected by integrity fields. 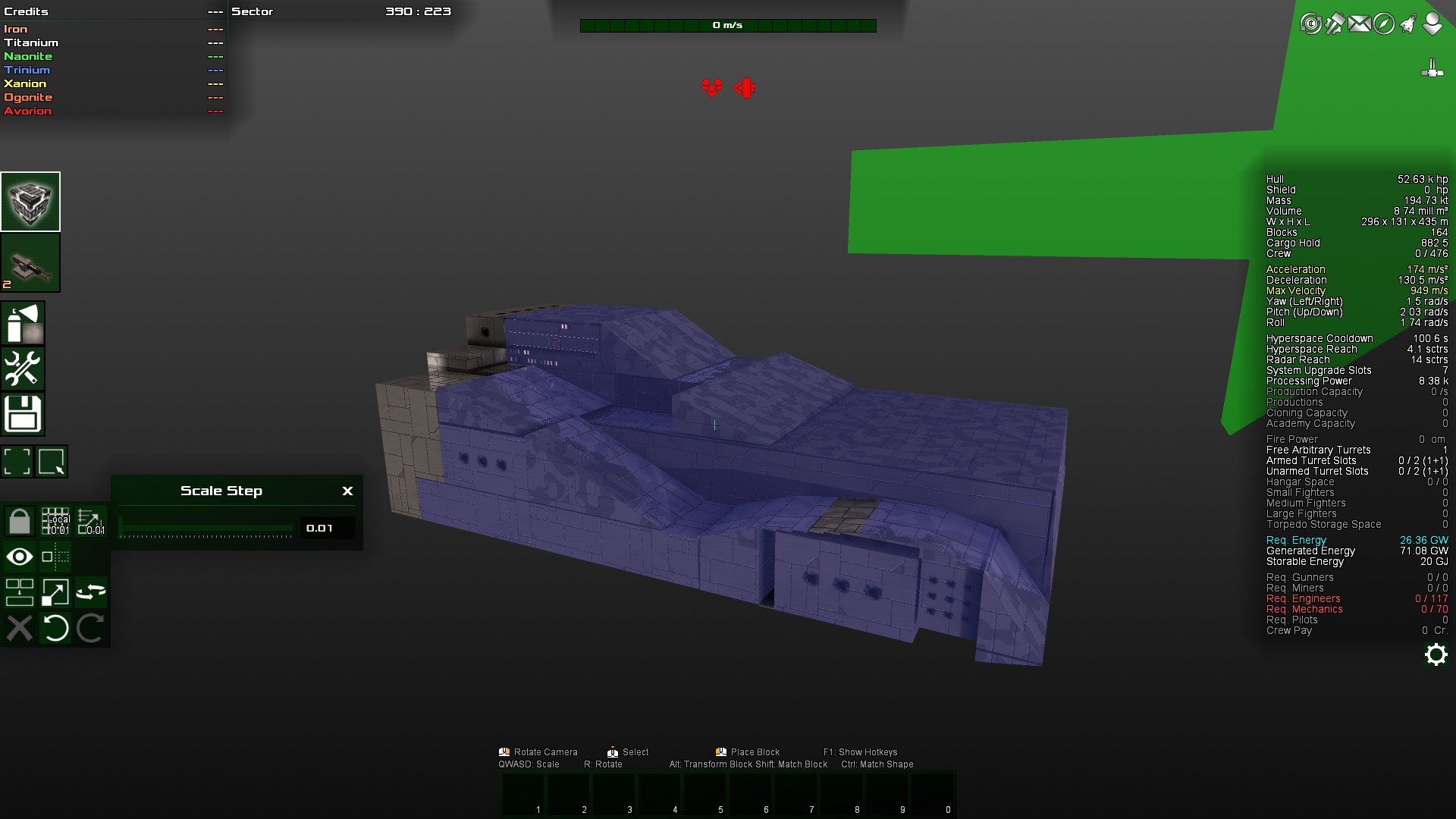 For instance, this ship when it collides with an asteroid, if the only part that touches the asteroid are the blue areas covered in integrity field, nothing bad happens. However if it bounces and slams one of the parts thats not covered in the integrity field, half your ship is now destroyed.

To remedy this, and it is as far as I can tell, very reliable, simply make sure all parts are covered in integrity field like so: Now this ship can safely collide with any asteroid at full speed without much worry. In fact, possibly better than ships built normally.

Why do all this work?

Here are the benefits summed up.

1. Lower repair costs (if you don’t full repair)
2. Better weight distribution
3. Keep ship functional for longer
4. You can have decor like name and emblem blocks that last a lot longer in combat
5. Guns can be made effectively immune to being knocked out
6. You don’t need to make your ship like a cube to maximise performance.

To answer the question, is it fair for you to abuse this mechanic, I just have to ask you a question back.

Are cube ships fair? Cube ships effectively also ignore block damage by making each of the 6 wall faces have more than 10% of the entire ship health and covered in integrity fields.

At least with this method you can make your ships a bit more artistic than a full cube.

What if I don’t want to build a full ship this way?

I get it, it’s tedious, it’s annoying, it can even limit your artistic freedom.

This is all about Avorion – How to Ignore Block Damage + Building Strategy Technique; I hope you enjoy reading the Guide! If you feel like we should add more information or we forget/mistake, please let us know via commenting below, and thanks! See you soon!