A guide to achieving a more than comfortable framerate in the latest update, especially in cities where the issue is most prevalent, at essentially no cost to visual fidelity. The new dynamic mesh system implemented in A20 causes extreme lag when not configured, and when properly configured, you’ll likely experience better frames than you’ve ever had before in 7 days, even at the center of a mega city.

Do note that this guide is not the silver bullet to cure a bad computer, but it will make running 7 days to die with a consistent framerate extremely plausible and likely, as you’ll no longer be bottlenecked by the dynamic mesh system.

IF YOU DON’T CARE ABOUT THE ‘LORE’, THEN SKIP TO THE FIX SECTION,

Once more, Please also keep in mind that this doesn’t help you run the game if your rig’s specifications literally cannot handle the graphics of the game. This guide simply covers fixing the extreme lag caused by the new Dynamic Mesh system, and I cannot stress that enough.


When I had first heard that Alpha 20 released, I was ecstatic about trying out all the new features implemented; especially the new and improved world generation. It was much to my dismay when I faced extremely annoying and downright unplayable framerates within and around cities (and even towns for that matter) during my testing despite running the game flawlessly previously in the same session. At times I’d have perfect frames despite an entire city’s LODs being rendered, while at other times my framerate tanked below even the double digits despite previously running it quite well. The only fix I had found was reloading my save once the framerate had gotten bad enough, which typically wouldn’t take too long after loading up a save. At first I had assumed this was associated with some sort of resource leak due to the problem’s consistent buildup from zero to a hundred percent every time I tested it, especially since the issue persisted throughout all graphics configurations I had tried, but eventually found the true cause of the issue; it was the new dynamic mesh system implemented in the alpha 20 update, which completely tanks the framerate when cities (and towns/POIs in general for that matter) are slowly ‘cached’, for lack of a better term. After playing around with the dynamic mesh settings, fixing the issue, and seeing countless other people experience the issue through posts on the reddit and discord, I decided to make this guide showing the fix I found. The next section will outline the change you need to make (In game, no registry and config file edits here!) to fix the FPS problem. 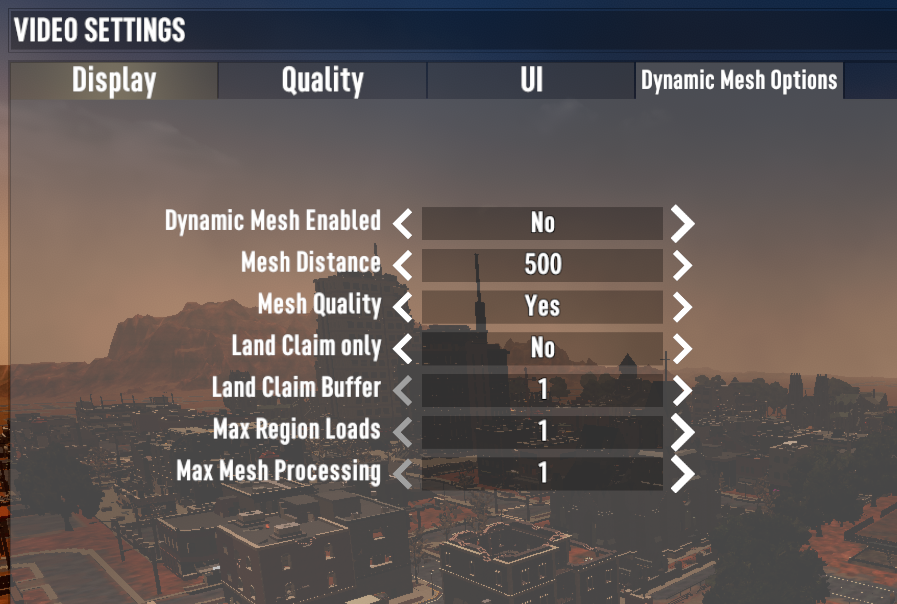 To fix the horrid framerate you’ve likely encountered thus far in Alpha 20, simply change the settings under the DYNAMIC MESH OPTIONS tab (which is located in the Video settings menu) to the ones shown in the screenshot above this text. After you’ve changed them, you should now have an extremely comfortable and playable (in fact, at least in my case, the best framerates I’ve ever experienced in 7 Days To Die came after changing to these settings) framerate throughout 7 Days.


Optionally, you can lower (the difference isn’t that extreme when lowering to 100 from 500, but can most certainly make a huge difference on a very low end rig, so unless you absolutely need it, I’d recommend sticking to 500 distance.) the MESH DISTANCE option to 100 for even more frames, however, I’ve found that 500 is generally the sweet spot before the framerate drops and the effect of the higher setting becomes unnoticeable, so keep it to either 100 or 500.


After a lot of testing, I will say that the other options are generally very unnoticeable when changed from my testing, so I’d recommend keeping them at what they’re set to in the picture. Make sure to keep the top dynamic mesh option set to no though, as thats the main FPS killer, but the other settings are also very important.


The best part of this whole thing is that there is genuinely no impact on the visuals, at least not that I could notice after *extensive* testing for multiple hours.


You’ll also no longer experience single digit framerates when looking in the direction of a city after changing these settings!

I hope this fix will have worked for you (and theoretically, it should) and has fixed any framerate problems you’ve encountered so far in Alpha 20. Hopefully the dynamic mesh options will be more optimized and properly setup by default once the stable build releases to the main branch, but in the mean time and if the default settings are the same at launch, this fix will be the solution to the huge framerate issue.


As always, you should still follow the tips and tricks others have always recommended (like lowering reflection quality and shadow distance) in the past for improving your framerate, but now the frames you get should be representative of your actual ability to run the game at those, and will remain consistent throughout all the places you visit, rather than seemingly randomly going to unplayable framerates despite a solid 60 fps moments ago for seemingly no reason whatsoever, giving you much more leniency and capability to raise your quality settings.


If you’d like to achieve even higher frames, I’d also recommend doing whats outlined in the picture below, as it can make a huge difference for some as well (this one is more on the general graphics performance side) so its definitely worth giving a shot if you wanna squeeze as many frames out of the game as you can. – Special thanks to Loner for reminding me (I had tried it and it made an impact, but forgot to mention it in the guide originally) about this and providing the image. 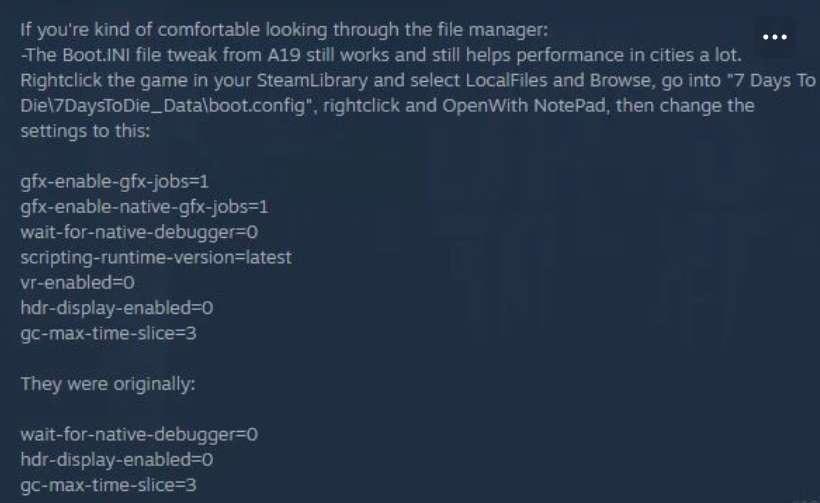 This is all about 7 Days to Die – Alpha 20 Update – FPS Guide; I hope you enjoy reading the Guide! If you feel like we should add more information or we forget/mistake, please let us know via commenting below, and thanks! See you soon!