Operation Citadel is a 11 mission Campaign i created. I made this out of boredom by the way. It has funny bits in it, also this is my first guide lol (not really a guide its more of a my own lore for Vanilla+ Ravenfield) but yes if you like this then i dont know how but thank you i guess.


Also you will need the Vanilla+ mods which are these


After that you’re all set to play this campaign!

The 2 optional mutators you can use before starting this campaign


For the health mutator the max health you can put is 300 and max hp regen is 1.5 with a 4 second delay before you start healing. Dont forget to put 0 seconds in the heal spaces so you heal continuously until you get hit or get to full health


For the ammo mutator max primary ammo is 9, secondary ammo is 4, small gear ammo is 3, large gear is 0

1983 Was the year it all changed. Since 1960 the Ravens and Eagles have been doing nothing for the fact that they are put under pressure of the Cold War itself. Their action of peace was heard from the civilians of both the nations. Eagle and Raven citizens flow through airports and start heading for the opposite nation. In 1962 Eagle and Ravens president have agreed to start a trade treaty along with a non-aggression pact. Fast forward to 1970 and a major terrorist attack hits Raven, its president was more of a dictator than so much of a president. Eagle rushes to stop the terrorists and beaten them so hard it was their first and final battle since Eagle really hated terrorists (America reference). With the terrorist attack gone, Ravens president resigned believing that “someone greater will accomplish what i could not but also lead Raven to a better future with Eagle” and he was right, or so he thought. 1983 was the turning point. It was just a normal day for both nations, they have stopped fearing the Cold War and everything was normal, but then an insurgency within Eagle stood up and took their archipelago. Eagle believes Raven has supplied these insurgents since archipelago was a impenetrable set of islands. Raven defends by claiming that they have not only have nothing to do with this but also heavily thanked Eagle for saving them back in 1970 and had done whatever it could to repay their kindness. Eagle wasn’t buying it (of course they didn’t) and until 1987 the war still goes on. You however are Daniel Muller (im not american please dont bully me) a lucky man who somehow participated on every battle with enough memory to remember every event that has happened for the last 10 years. If he survives he can tell what it had been like fighting.

Lets rewind to 1983. Eagle and Raven were in no shape to have a massive war since they are both known for one thing and one thing only: terrible mobilization. So they both practically sent the first hundred men to die for no reason. Eagle and Raven forces met in rafts (who made the rafts though?) in which they just stood there because neither side officially declared war, so who did? Eagle did it, how? One of their guys was trigger happy (me when american revolution reference) And thus begins the war of Eagle and Raven all caused by one man (but quite frankly they would still be fighting anyway) Eagle single-handedly won rafts. With Raven sending out the remaining survivors of the battle to reinforce Archipelago… (i think you know which map is gonna be the second last here)

Alright enough daydreaming about the first battle that started all this. It’s February 11, 1987 and you are in Temple. Simple objective: beat them faster than they beat us and dont die. Dont forget to have winter camo on!

Raven is retreating! look at those bastards run. Speaking of taunting, you should really get to fortifying the Temple

The first battle for Earu island


Earu island is like the isle of man. Only this time its not under control by the British. Infact it was named by both Eagle and Raven back before the cold war even started and Eagle or Raven had no interest in taking. Until now of course, Whoever controls this tiny island in the middle of nowhere gets to spam 20 builder units and immediately build a shipyard in the span of 10 minutes (probably wont happen but alright)

Raven will curse their defeat and promise for revenge, in the meantime your buddies celebrate your duel with that attack heli. It’s not much but hey you did it i guess.

The Skirmish in Dustbowl


Dustbowl isn’t that much of importance to both sides since it was just literal desert. Eagle Controlled an airstrip sure but can they control the entire region? (spoiler alert: yes) Eagle commander Paul Ruchtofen (wait he’s German?) decided to help out a bit. And besides, Dustbowl connects to the Desert hills which connects to the Canyon. You’ll see its use later. 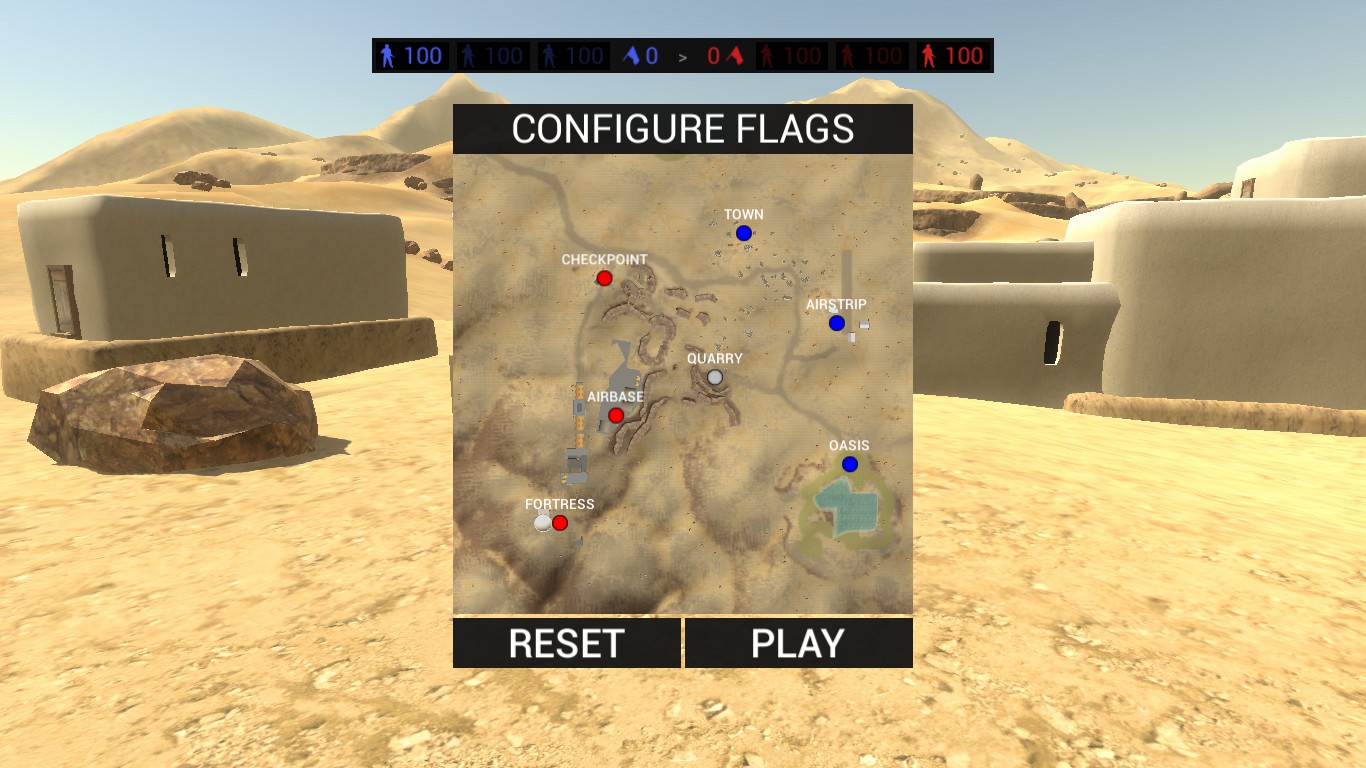 See this map of Dustbowl? Make sure it looks like that

Some Eagle Corporal thought Ruchtofen was doing something bad so he reported it to high command. Turns out high command was retarted and had tunnel vision to Dustbowl, they sent 2 battalions and replied to Ruchtofen “your campaign within the south begins. Command everyone and kill everyone that’s red” after hearing this everyone especially Ruchtofen were excited, HOORAY WE AREN’T DOING OUTPOST DUTY. HOORAAAAAAAY.


The war is doing well so far for Eagle. Coastline is their next target as its the only region that connects to Ravens Citadel and Eagle wants it. Remember Normandy? Yeah its kinda fortified so you’ll be sent in to infiltrate just 1 day before the planned assault. Special Forces of Eagle’s Republic (S.F.E.R) is counting on you and hey, you might even get some good food as compensation for waking you up at literally 12 A.M.

Your success really kicked Ravens a*s hard enough to send them crying back to their commander within Coastline, guess you wont have to try hard enough.

The Second Battle for Earu Island


I didn’t name it the first battle for Earu island for nothin. But thats the least of your worries. Raven lands again and our engineers were executed right on the spot so they didn’t even have the chance to flee. This is a warcrime and you will make them pay. Or will you? Well unfortunately you’re defending not attacking 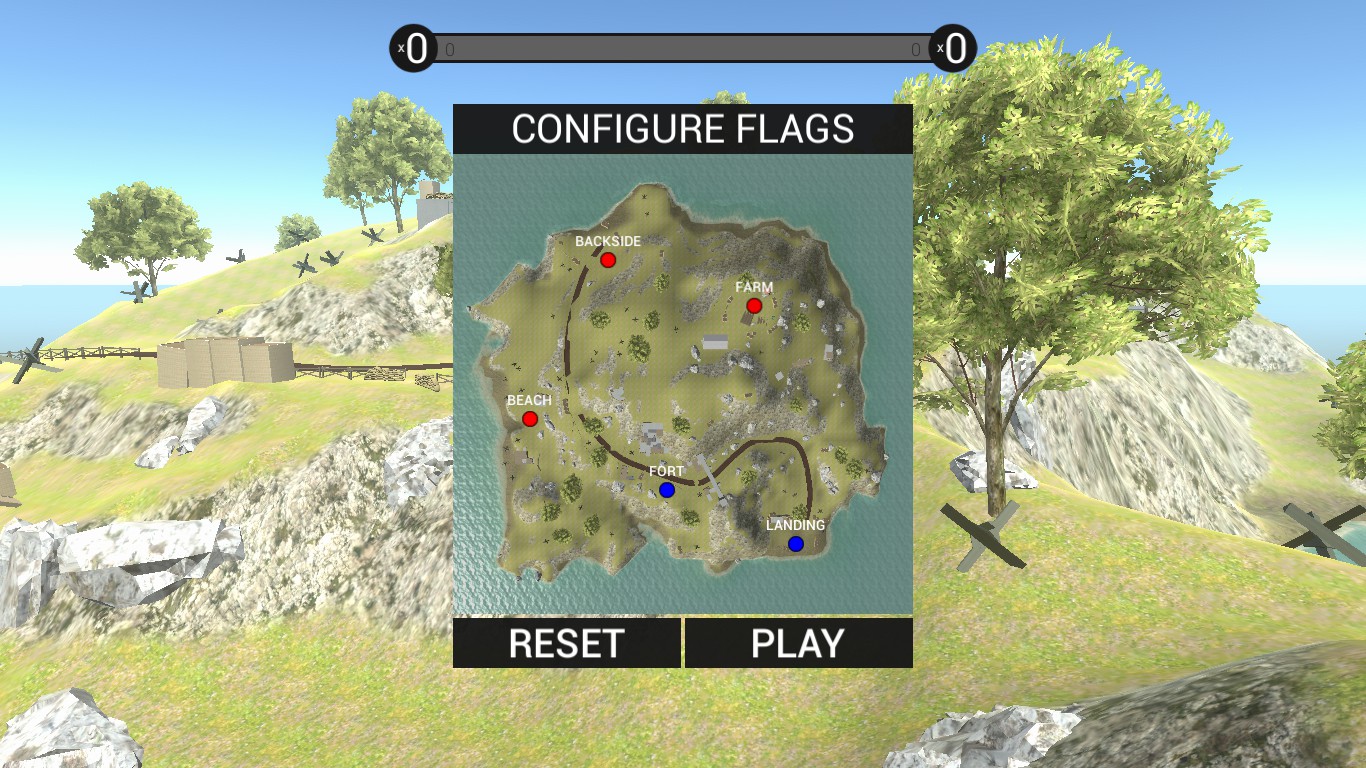 
Hope you did well during your night raid! Eagle is attacking and it doesn’t matter what you did. We will eradicate the Ravens whatever the cost. Even if it means to delete genshin impact (i dont play genshin impact by the way) 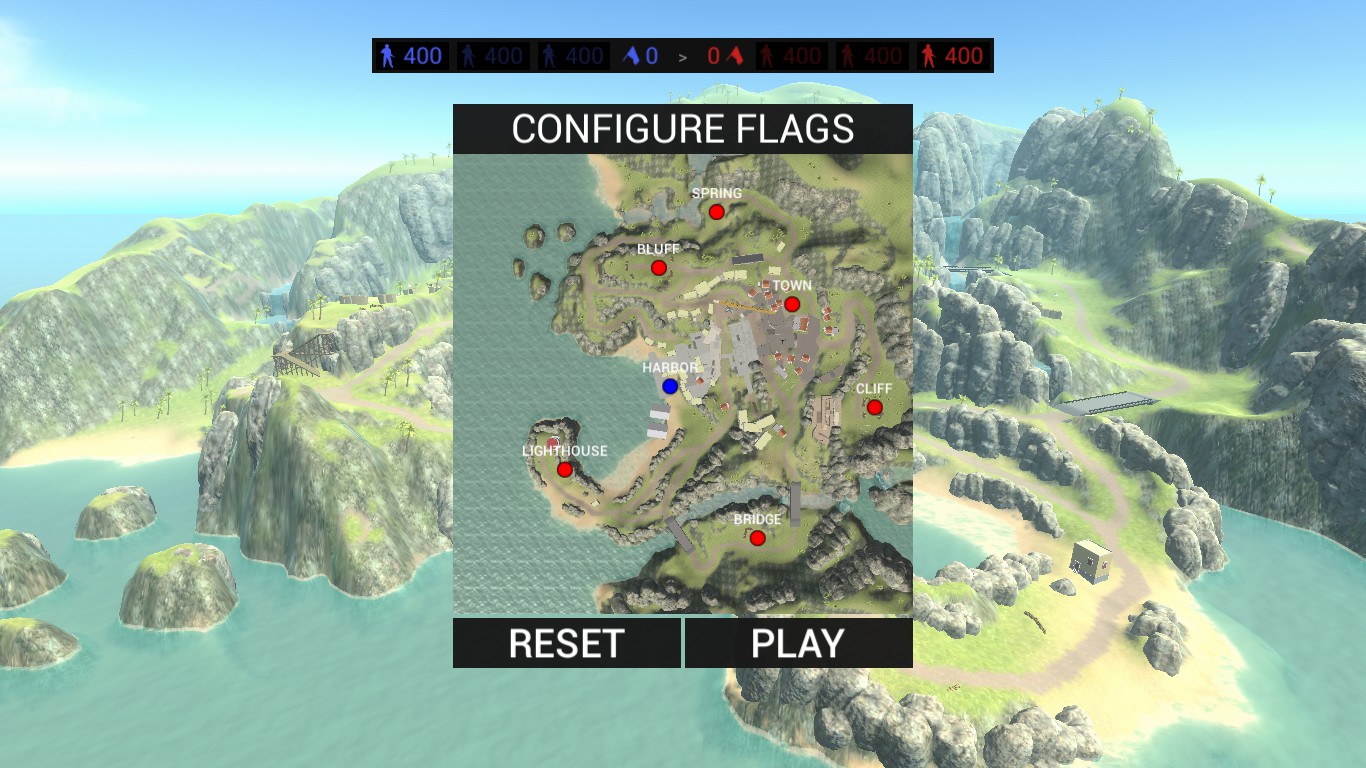 Finished 1 task: Move slider to Raven until 2 Eagle soldiers disappear and replace their apc spot with the tank


Finished all 4 tasks: Do not move the slider. Remove anti tank for Raven and replace their tank spot with their apc

The greatest success for the Eagle army to date. This is where it ends for Raven… Wait what about the Desert hills and Canyon?

Desert Hills and its blandness


Paul Ruchtofen was thinking of endless possible strategies and training men that looked like they just got conscripted. The day he attacks is today, oh wait i forgot to mention he got sabotaged so it had to be postponed. So here he is fighting Raven in the night, they forgot to bring their desert camo though…

Paul Richtofen Admitted this looked awfully like the North African campaign. So he got drunk after the battle. Canyon is far away so his men will have to try not to starve and more importantly. Not die when getting there.

The Offense for Canyon


2 weeks of planning (again) and reorganizing for the final offensive within the South of the 2 nations. Desert hills actually connects the 2 nations if you didn’t know (i mean you probably do but imma pretend you don’t) so the final offensive for a pincer movement to Ravens Citadel, not their capital but it is the major military base for both nations which means once its lost either side might as well give up.

We have done it! Raven is to lose now! Oh yeah remember Archipelago? The Eagle controlled islands that the insurgents took over in 1983? Well every attempt to take it back failed… Get in there Daniel! Tell the world what happened!


Everyone even Eagle and Raven celebrate April fools, but since were at war you know damn well today is about lying to your enemy. Raven decided to go for Earu island again and miserably failed. Same goes for Dustbowl, Insurgents and Ravens fill the used-to-be Eagle Archipelago. 4 whole years of Raven and Insurgent occupation within Archipelago is enough to piss Eagle enough and since everyone was acting funny for April fools Raven will meet their last worst defeat of the war 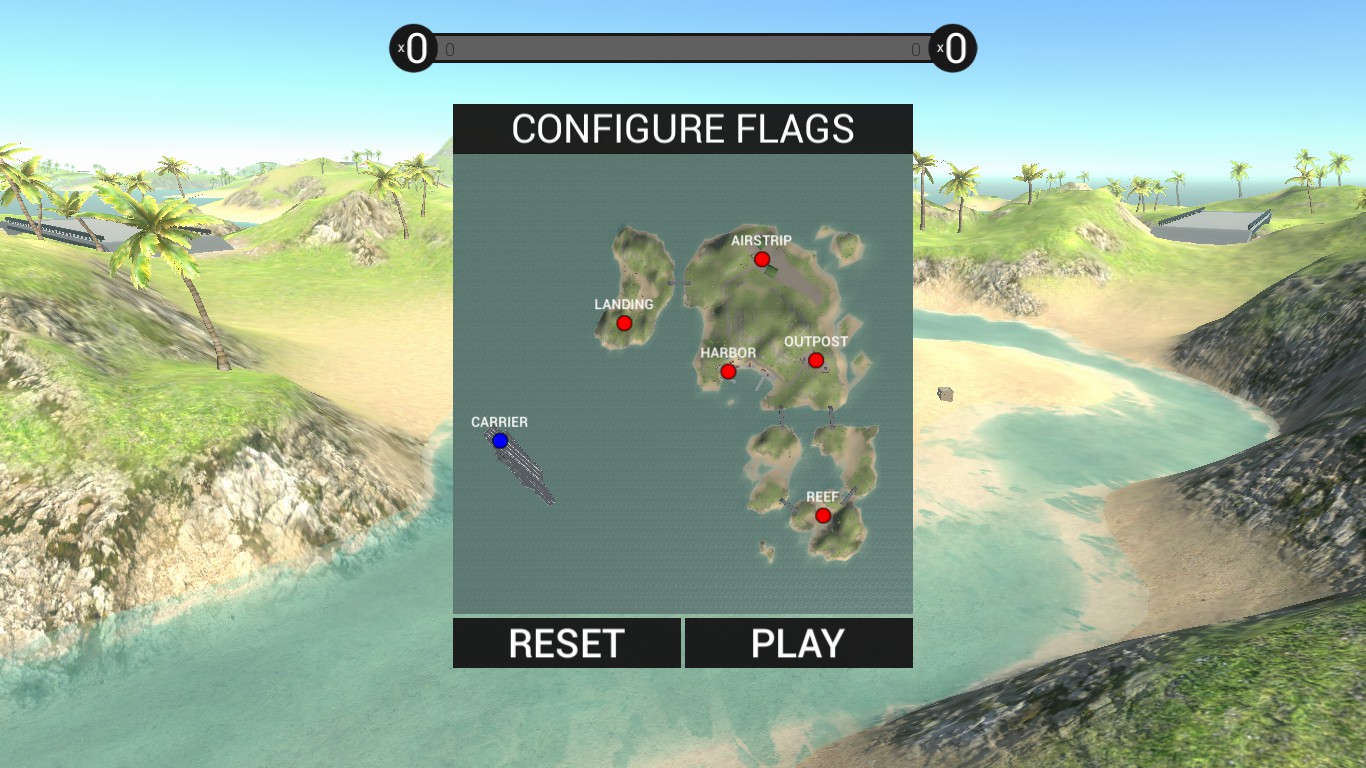 WE HAVE DONE IT! FOR 4 YEARS IT HAS BEEN UNDER RAVENS RULE BUT NO MORE! FORWARD MY BROTHERS! FOR THE REPUBLIC!!!


This is it, their citadel is just up ahead. 4 Years of constant war and we have finally done something. MOVE FORWARD MY COMRADES. FOR VICTORY!!!


Except uh oh plot twist nerd you’ll play as the Ravens for this one with a goal so simple even a rookie commander can do it, and that is survive.

So much bloodshed… So much corpses… What did we fight for? Nothing? Its what Eagle and Ravens people are thinking. And wouldn’t you know after 3 hours of mass protesting later both sides are forced to agree on permanent peace and try to re-establish good relations. The war may have been worthless but Daniel has a bit of talking to do. And hey maybe his experiences during the war will be heard around the world. Unfortunately our story ends here. Thanks for following this Campaign i made, its kinda bad to say the least but if you think its cool then you’re cool too! (im so bad at complimenting) but nevertheless i’ll probably make another one of these, you’ll just have to wait…

Hope you enjoy the Guide about Ravenfield – Operation Citadel (Campaign) Full Gameplay Guide, if you think we should add extra information or forget something, please let us know via comment below, and we will do our best to fix or update as soon as possible!