Hello everyone! I recently completed the "Perdifious Albion" achievement in Imperator: Rome so I thought I might write a detailed guide. I’ve been trying to do that achievement since the game came out but the recent patch made it a bit easier to complete.

The short version of the guide is presented in the following picture. Both me and my brother used that general plan to form Albion before 500 AUC. 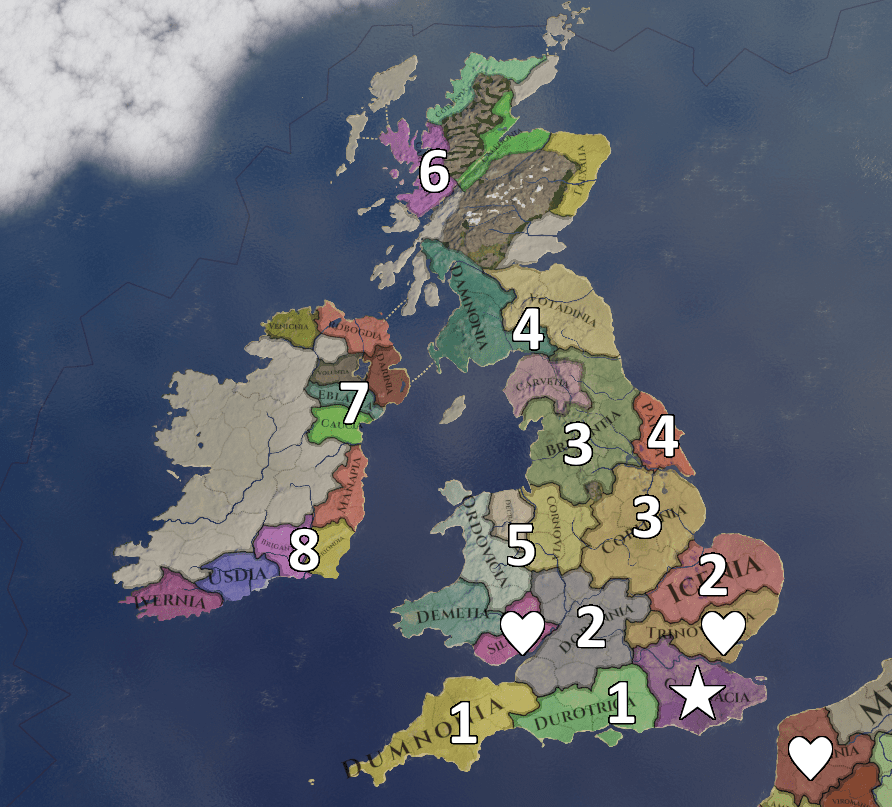 Brief game plan, we will discuss stages below.

The recent patch changed mainly 2 things for us in terms of completing this achievement. Firstly, we can now integrate cultures easily which makes colonizing very easy. Secondly, the new Stability system heavily penalizes aggressive expansion (AE) which basically puts us on a clock with an expected crisis around 475-480. Actively managing AE is the most challenging part of the run, so try using sacrifices as much as possible. The bottleneck here is the Political Influence (PI) which we are basically starved on – do not waste it at all!

Start of the Game

We will be playing as Cantiacia and Durovernum will be our Capital which we expand using Urban Development. With each development taking 2 years get ready to press the button on cooldown and always have 25 PI for that. The plan for the game start is the following:

1 month into the game you can Summon War council to get an easy claim on Durotriga. Wait couple of months if needed for them to get an alliance with Dumnonia, then take both countries.

Attack Dobunnia using the claim from the Mission Consult the Clan Council. In a perfect scenario only Icenia is their ally but you can take 1 more country if needed.

Siluria might want 1 settlement (Vertis) in the peace deal, just go with it. Always demolish fortresses which are far from borders. 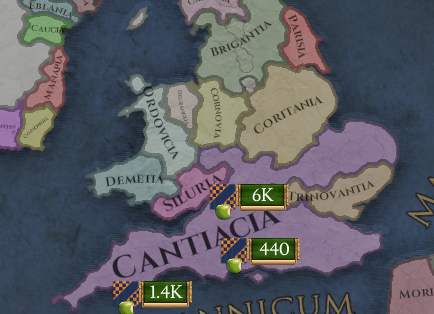 As soon as the war ends get ready to attack Coritania and their ally. Be very careful, they will enter a defensive pact very soon if you remain passive. I had approximately 3 months between the wars, which I used to build 5 more cohorts. In my playthrought only Brigantia was Coritania’s ally which was a huge, huge win for me (taking out 2 most powerful enemies at once). Don’t forget to constantly improve the capital.

At this point depending on the alliances you have to either attack the north or the west defensive block. I went with the North one (Parisia, Votadinia, Damnonia, Carvetia) and by 467 I had it annexed. At that time Trinovantia might become useless as ally, don’t hesitate to drop them or Morinia and later annex them. Just pick your time, it can be done later, too. 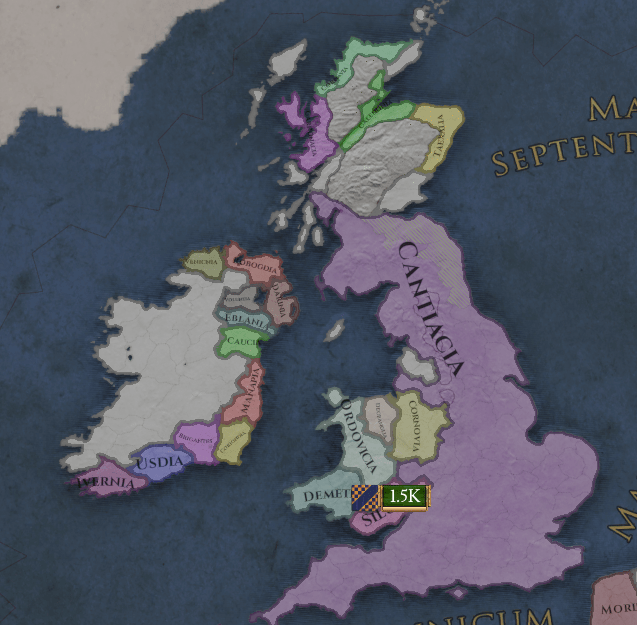 Our territory in 469 after annexing Trinovantia

At this point we have very high AE which results in us having a very low stability. I used a couple of years to calmly develop, rest troops, drop some AE and by 473 I only annexed Ordovicia.

By approximately 485 you should have annexed couple of countries in Scotland and couple in Nothern Ireland. Use these 10 years (475-485) to eliminate countries like Demetia. Also integrate Hibernian culture and start colonizing. At that time you should have tons of gold and a huge income (never forget to demolish fortresses). 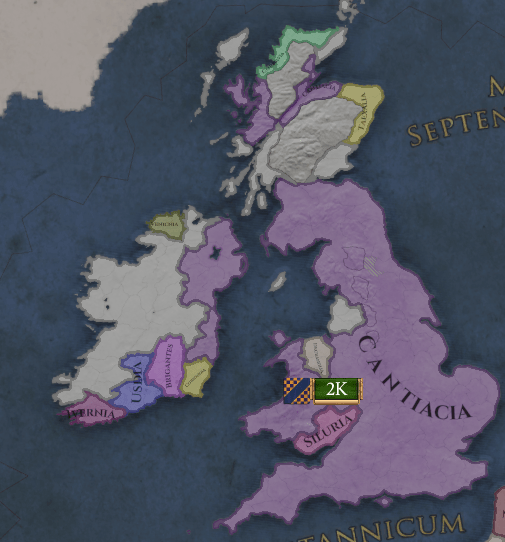 Territory in 485, we are colonizing Ireland

By 493 I had colonized the entire Ireland except for 4 countries in a defensive pact. At this time I had so much money that I just hired some mercenaties to quickly finish them off. Break your alliance with Siluria if you haven’t done that before. If your Stability is OK (40-ish), assimilate Caledonian culture to facilitate colonization of northern parts, else just use a slave train from Hibernia. You also should be able to start the Tribal Reform mission. 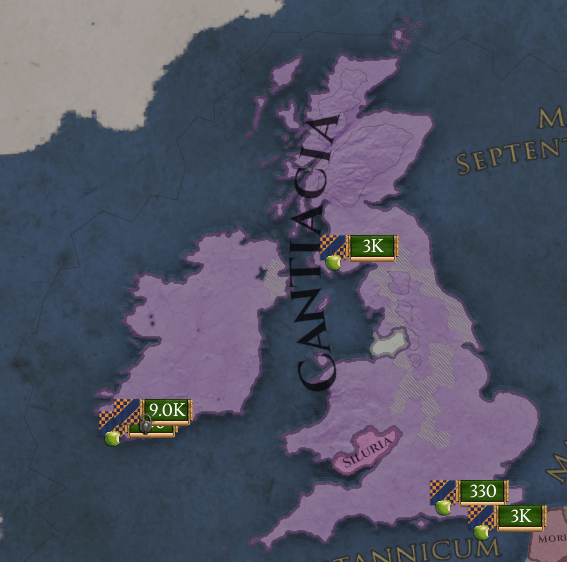 The year is 495 and the clock is ticking

At this point I realized I had made a mistake by forgetting 2 things: 1. You need a claim on Siluria and 2. Uniting Pritania gives you +10 Civilization level (my current capital development was at 48).

As I was running out of time and this was going to be my last war I just declared a war with no casus belly and annexed Siluria in approximately 1 year. Using a small train I also colonized the last couple of blank spots and formed Pritania. At this point I was starved for PI so I didn’t even bother with selection National Ideas etc. Just ignore all possible problems and revolts at this time, just get 100 PI for the Legal Reform. A couple of months after I formed Pritania my capital had 50 Civilization, so by early 498 I started the Bureaucratic purge. Even though I kept losing stability etc. the revolt only starts in 40 months so I didn’t really care. By the end of 498 the Purge was over and I could finally declare Absolute Rule. 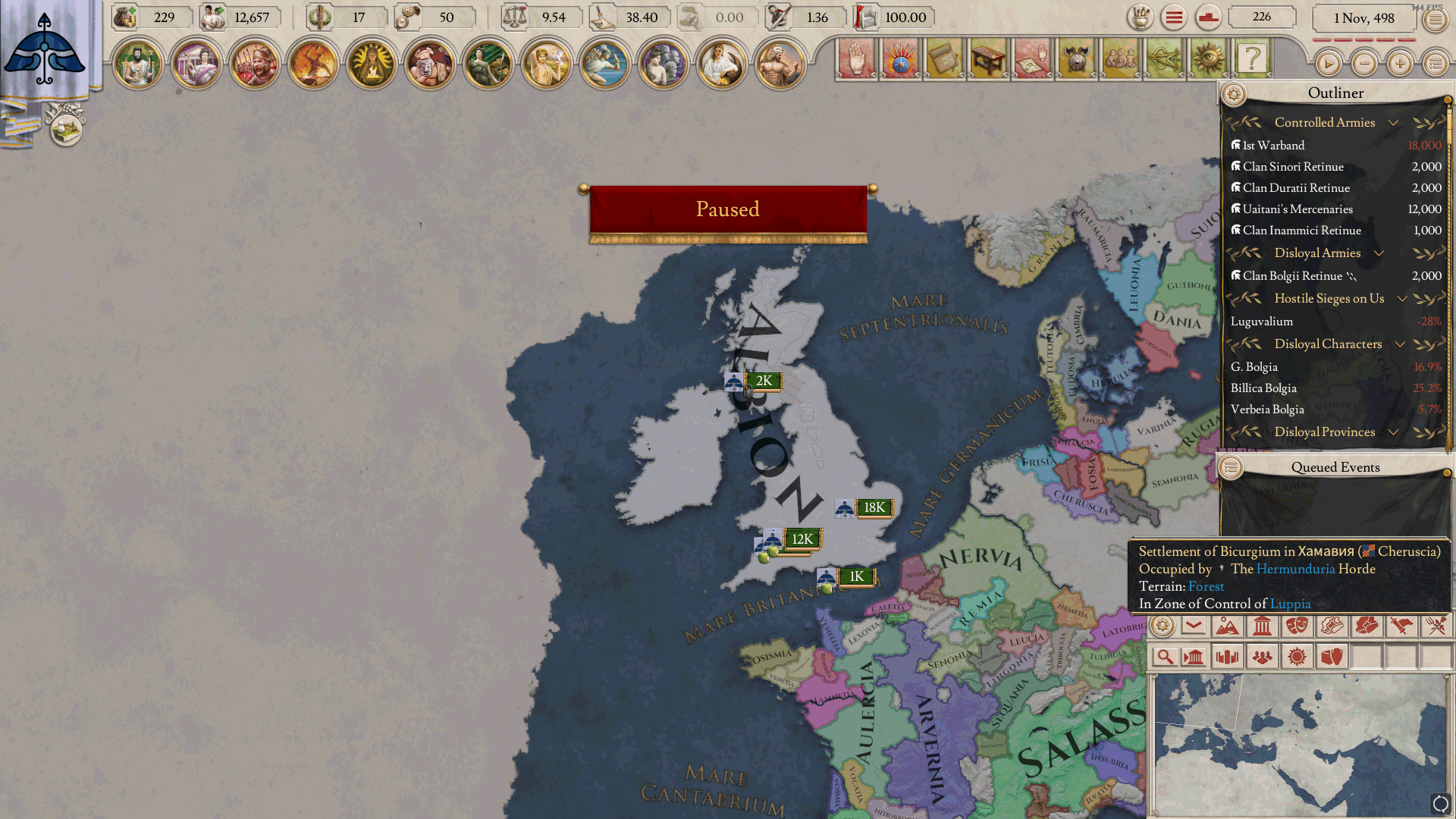 Even though I made several mistakes (especially at the end) and had to do almost nothing between 475 and 485 the achievement is pretty much doable given the right deities in the pantheon and some luck with the enemy alliances. Keep trying and you’ll get it!

I hope you enjoy the Guide we share about Imperator: Rome – Yet Another Perdifious Albion Guide; if you think we forget to add or we should add more information, please let us know via commenting below! See you soon!