You’ve got a village to protect, and that means dragon-slaying.

You can find the dragon lair on your map: 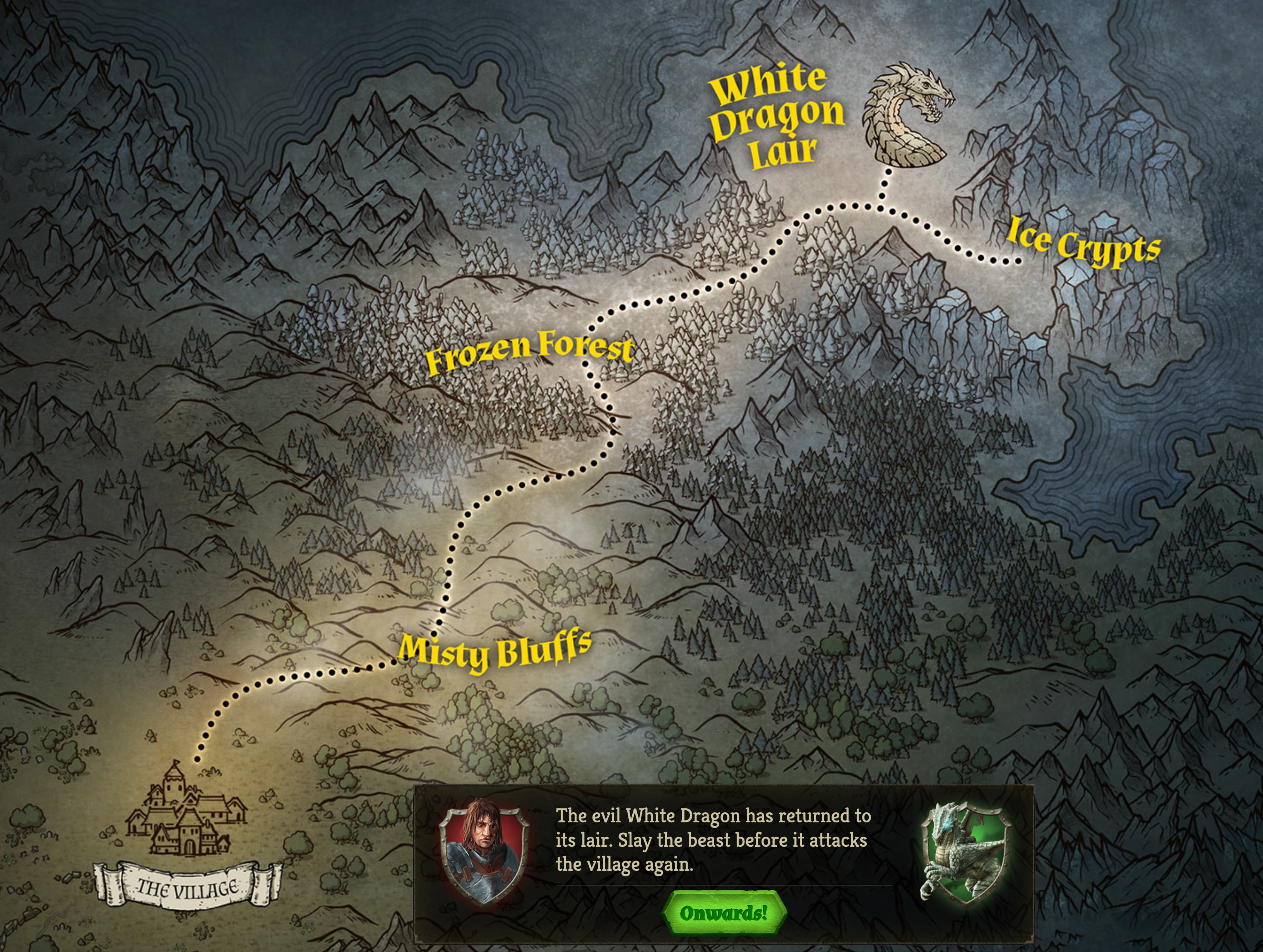 To complete your quest, make your way through the wilderness, gaining better weapons and magic along the way. When ready, enter the dragon lair and slay the dragon.

There are five types of dragons that attack the village. Each has its lair in a different part of the world.

You start each quest with terrible weapons, so try to find rooms where you can grab better weapons without having to fight. If are up against a white dragon, you would start here, in the misty bluffs: 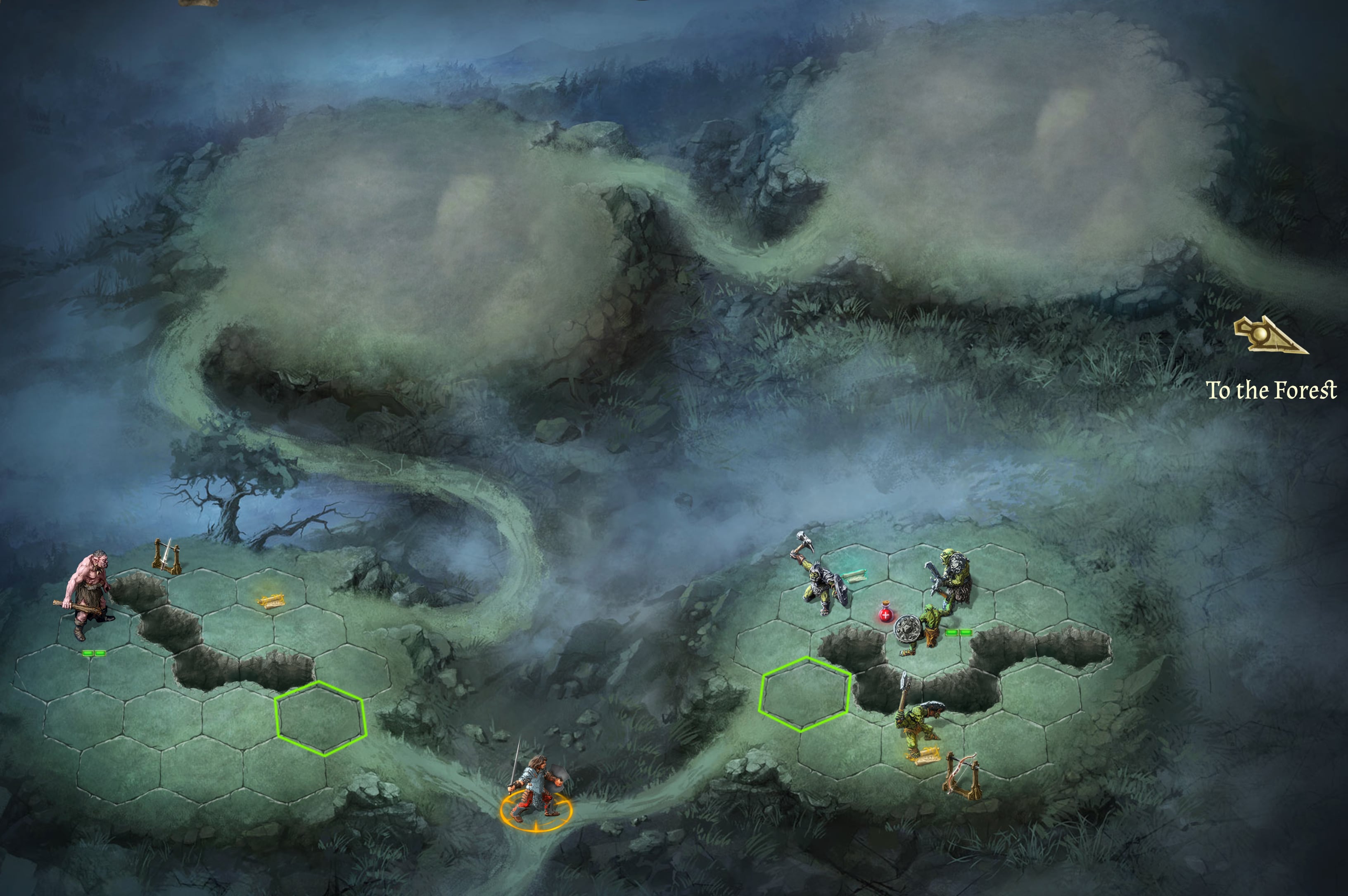 In the above case, you should try to take that sword from the room on the left with the ogre. With all those pits, you can probably get the sword and get out without having to fight the ogre. And looks like you can get a leap scroll too!

The room on the right with the orcs has a health potion, leap scroll, and bow – but I’d recommend leaving that room behind and coming back later when you have better weapons to fight the orcs with.

To sneak, you click a tile next to you. You can see your chance of NOT being spotted in the bottom left of the screen. 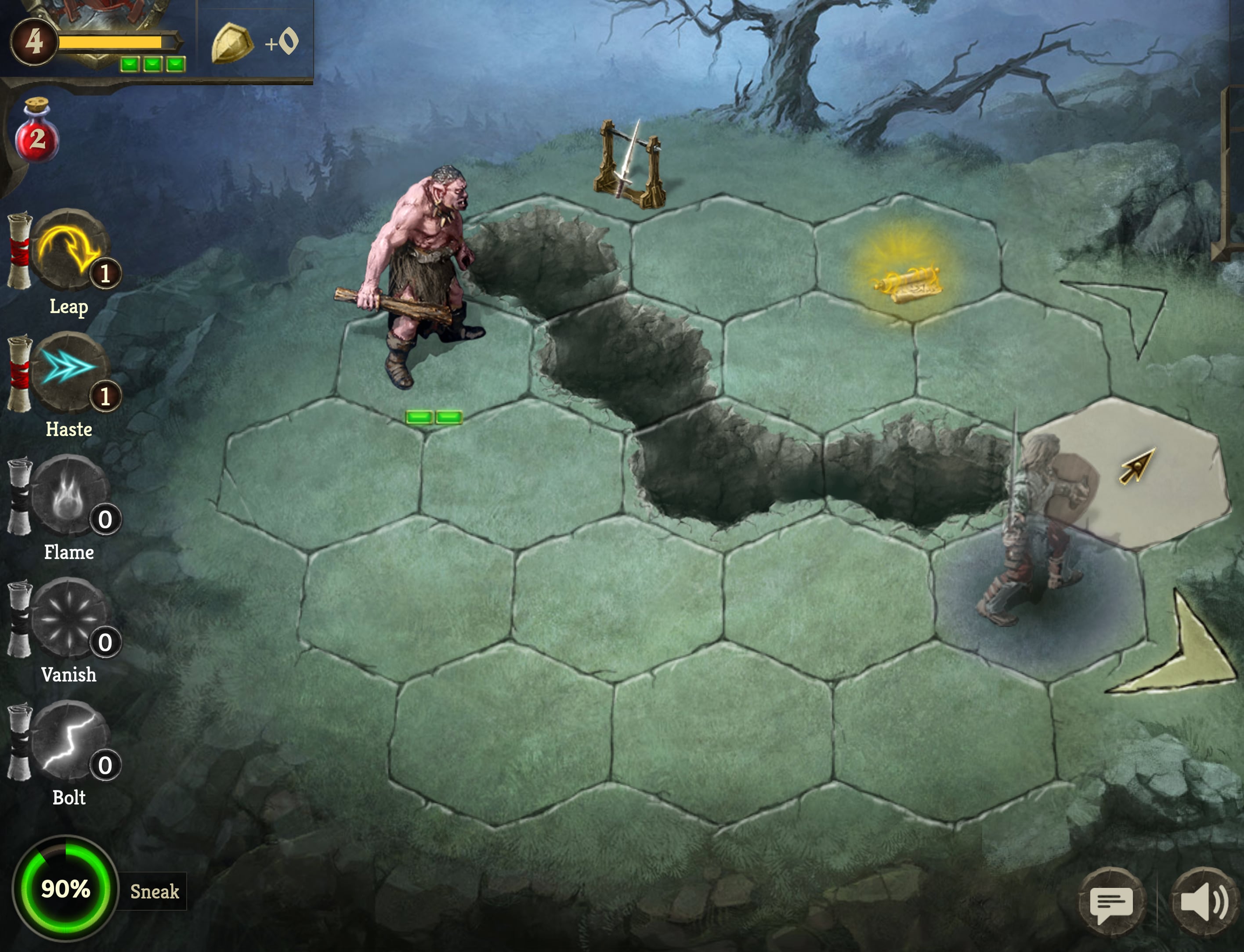 Here you could try to sneak to the ogre and do a surprise attack, but that would be crazy! Instead, you’d want to sneak to the sword. With some luck you’ll be able to get the sword, then leave the top right exit without having to fight. And if the ogre spots you, you can shoot your bow at him while he walks around all those pits.

Tip: Stealth is usually used in 3 ways: 1) Pilfer a weapon so you can fight with it; 2) Sneak to a strategic position, then start combat with a surprise attack; 3) Sneak through the room without fighting anything.

Each turn you’ll have the option of using scrolls first, and then you can either move or take one of these basic combat actions:

BOW ATTACK: Click the tile of a monster that’s 2 or 3 tiles away. (You’ll lose your shield bonus until your next action, so avoid bow use if another monster is next to you.) 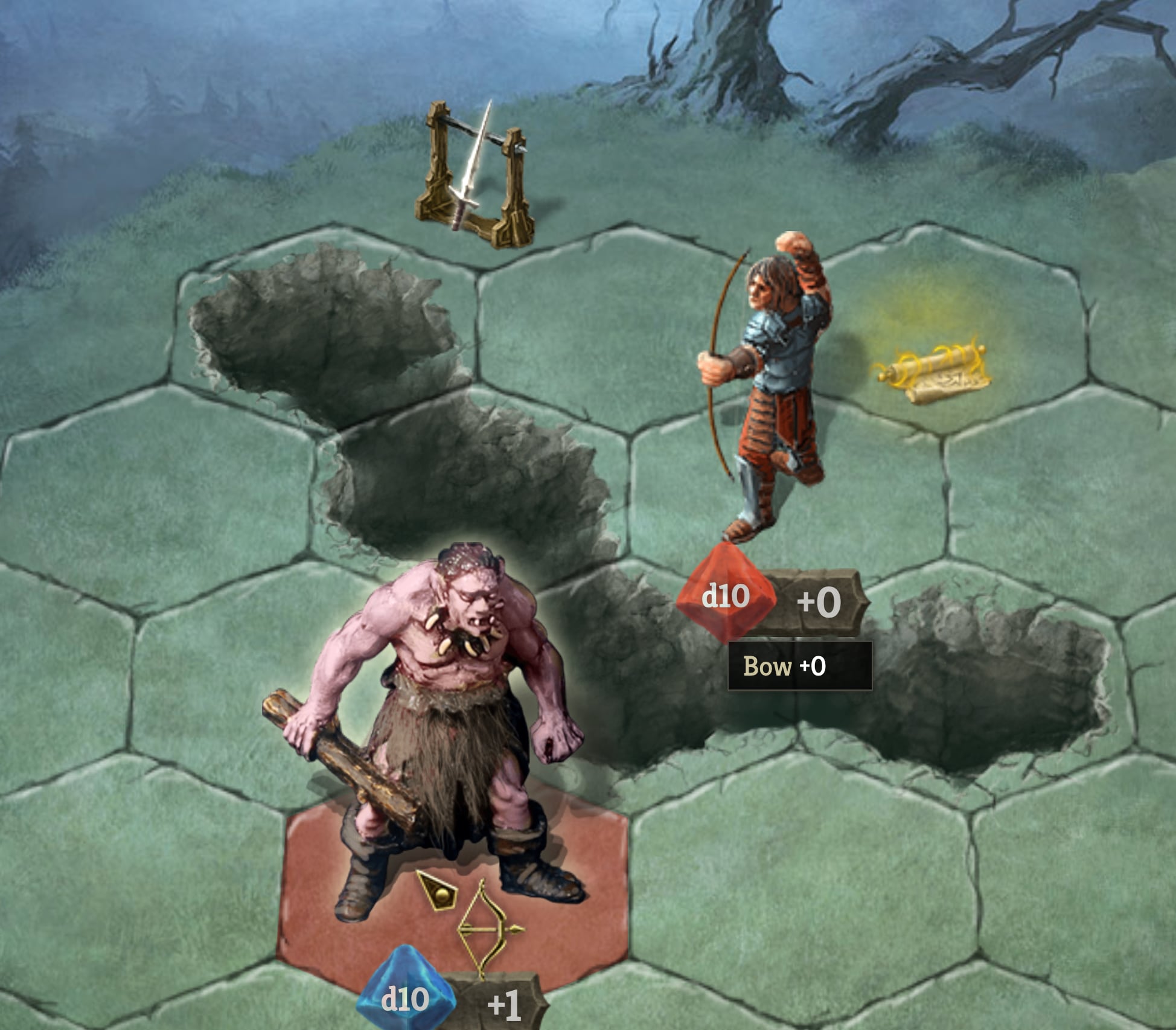 SWORD ATTACK: Click on a monster that’s adjacent to you. 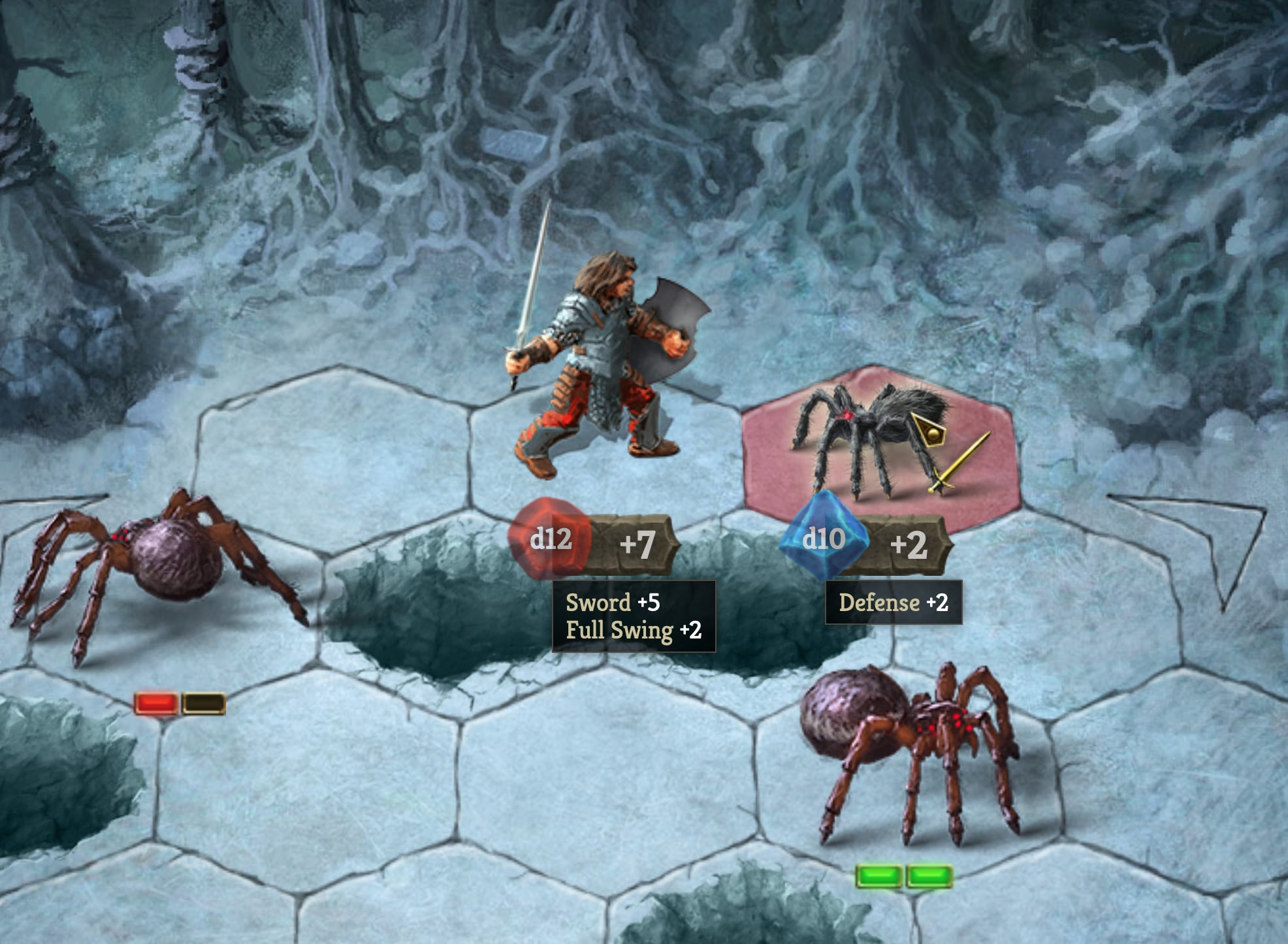 GUARD: Click your own tile to skip your action but counterattack every melee attack that misses you. You’ll also gain a +2 defensive bonus. Do this if you find yourself surrounded. 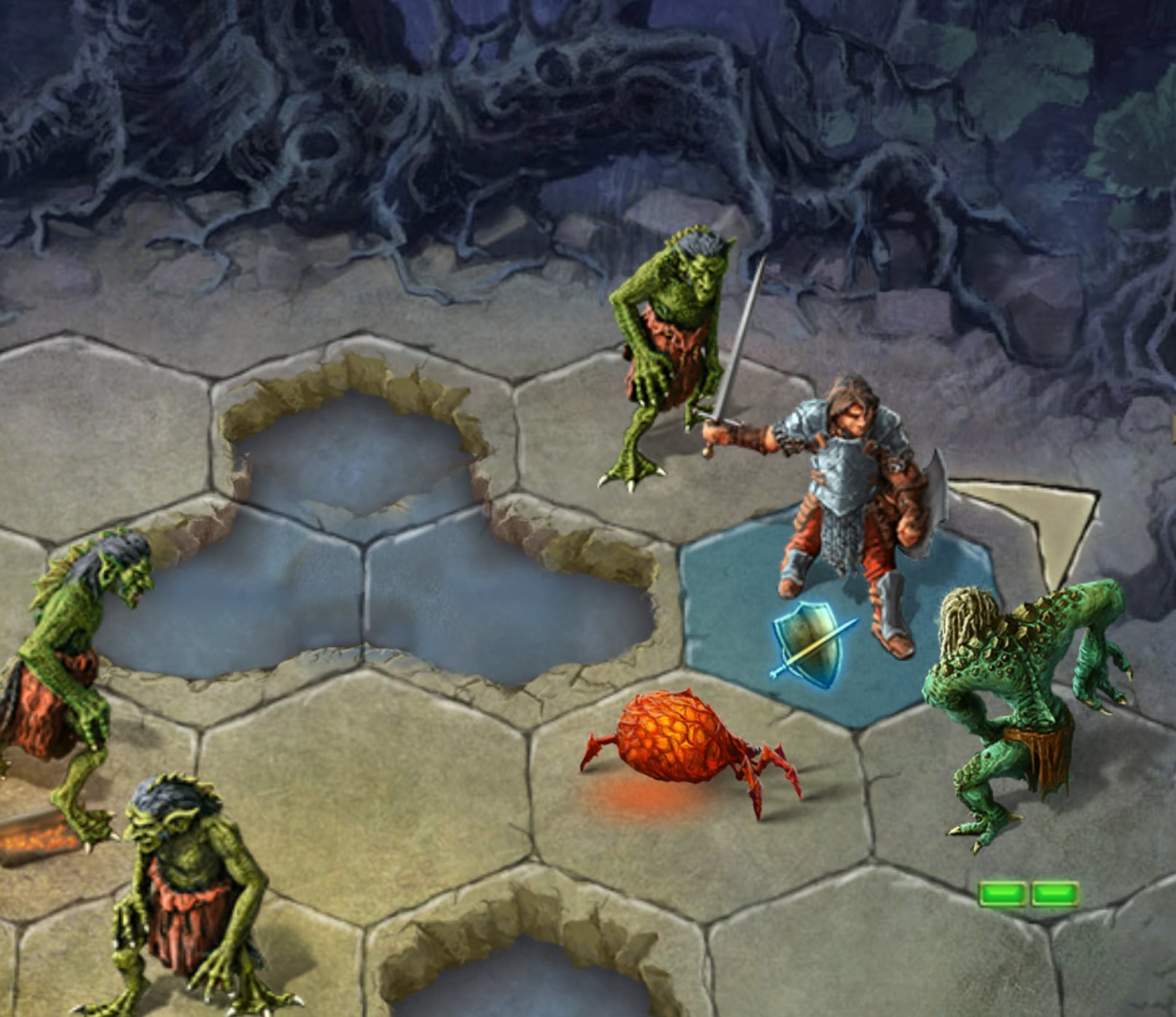 BULL RUSH: In addition to the above actions, each hero has a few special abilities. For example, the human swordsman can Bull Rush, which allows you to push your target backwards, then follow it and attack from the tile you pushed it off of. You do that by clicking the tile behind the target. In this case, bull rushing the bugbear with the hammer lets you attack it, while putting some space between you and the bugbear with the flail. 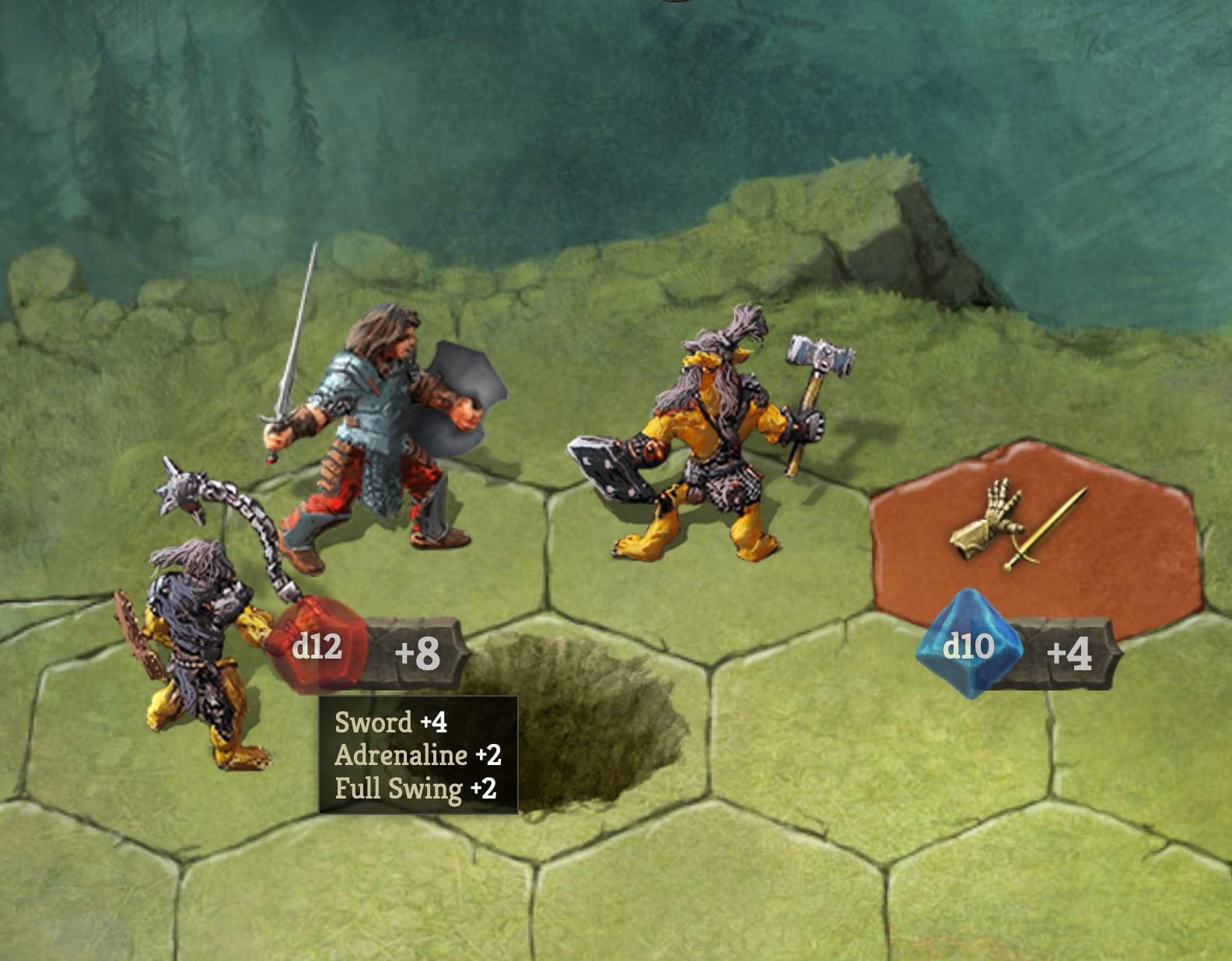 General Combat Tip: Use pits as barriers so you can safely use your bow or fight one monster at a time with your sword.

Attack results are determined as follows:

Monsters use a ten-sided die (d10) for all their rolls. Each hero rolls either a d8, d10, or d12, depending on the weapon. See the character sheets for details.

Below, we see that the unseen elf is doing a surprise bow attack against the rat of unusual size. She rolls a d12 because she is proficient with a bow, then adds +3 because she is using a +3 bow (shown on the top left), and another +3 for surprise – for a total of +6. The rat rolls a d10, then adds +3 because the rat has a 3 defense stat (shown on the top right). 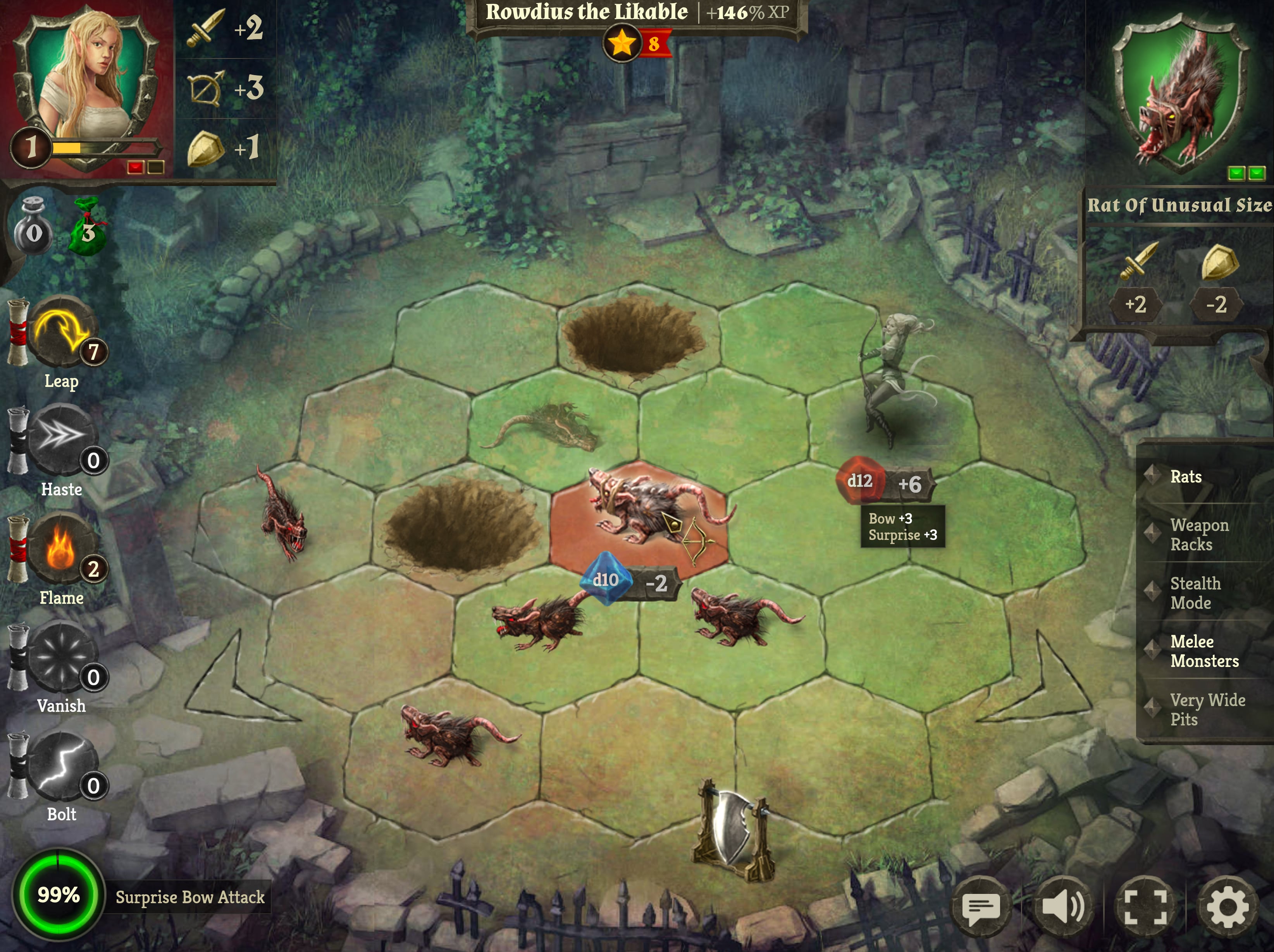 The percentage chance of hitting is shown in the bottom left corner of the screen.

WHEN A MONSTER ATTACKS:

A monster’s attack stat is shown under the monster portrait on the top right of the screen. For melee monsters, the stat is next to a sword; for missile monsters it’s next to a bow; and for spell casters, it’s next to a hand. The monster rolls a red d10 and adds its attack stat. You then roll a blue d8/d10/d12 and add your shield bonus (shown next to the hero portrait).

There are many other modifiers that you will learn as you play. Here are just a few:

You pick up scrolls just by moving over them. You can use scrolls at the beginning of each turn.

Your current scrolls are shown on the left of the screen. To use one, just click it. 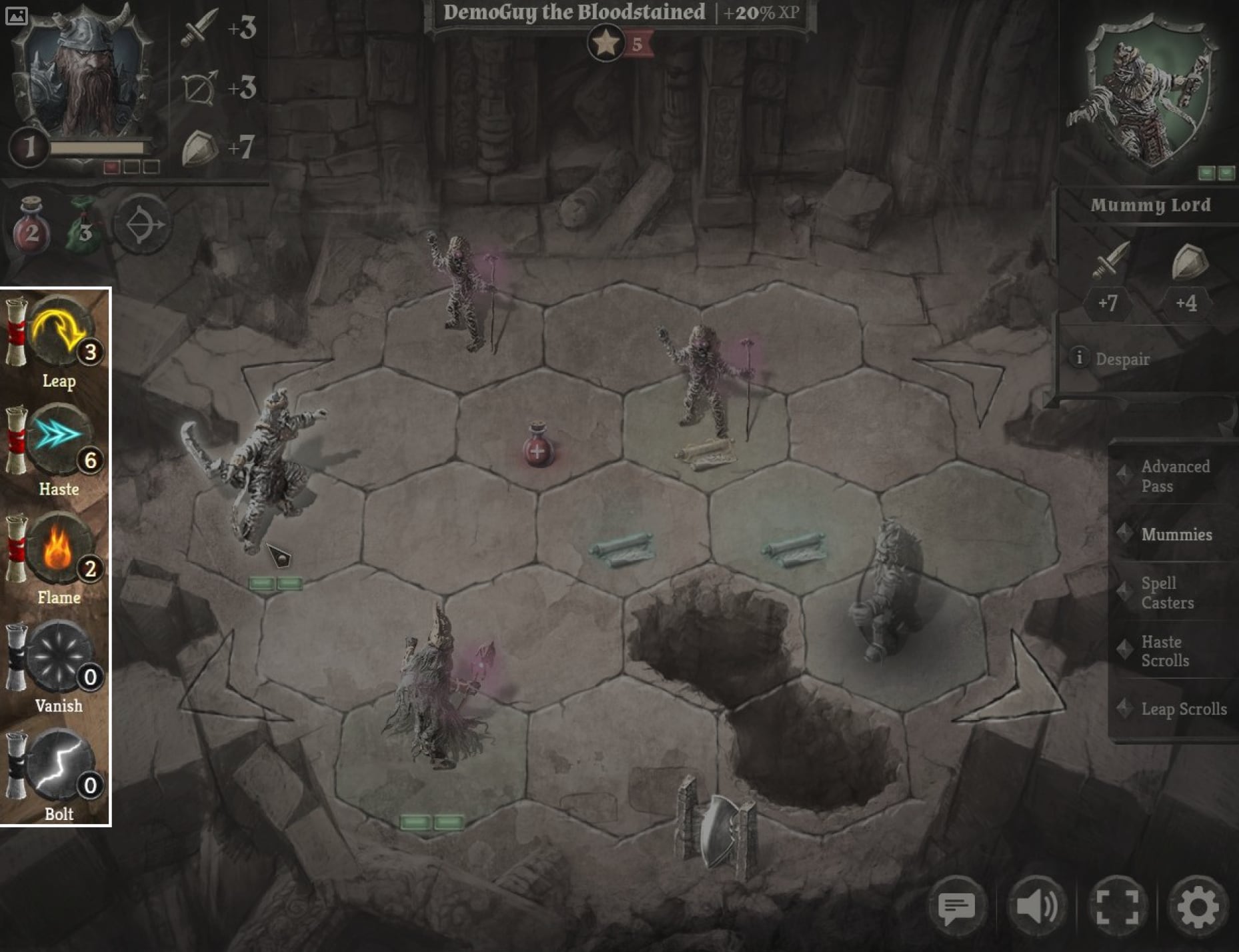 Here’s what each scroll does:

Leap Scrolls – Click a tile up to 2 away to leap to it.

Haste Scrolls – Gain a free action. If you attack, get a +1 bonus.

Flame Scrolls – Set up to 3 tiles aflame to create a defensive wall. If a monster floats, you can put a flame under it, with satisfactory results.

Vanish Scrolls – Return to being unseen.

Bolt Scrolls– A d10 +10 attack against all monsters in a straight line.

Using a scroll does not use up your action. So, for instance, you could use a scroll to leap across a pit, then fire your bow at whatever you leaped away from.

Tip: You don’t keep scrolls between games. So use them or lose them.

Dungeoneers gameplay has a lot of nuance. This guide should be enough to get you started, but it only scratches the surface on how to play well.

For extra info about what’s in a room, use the info menu on the right. 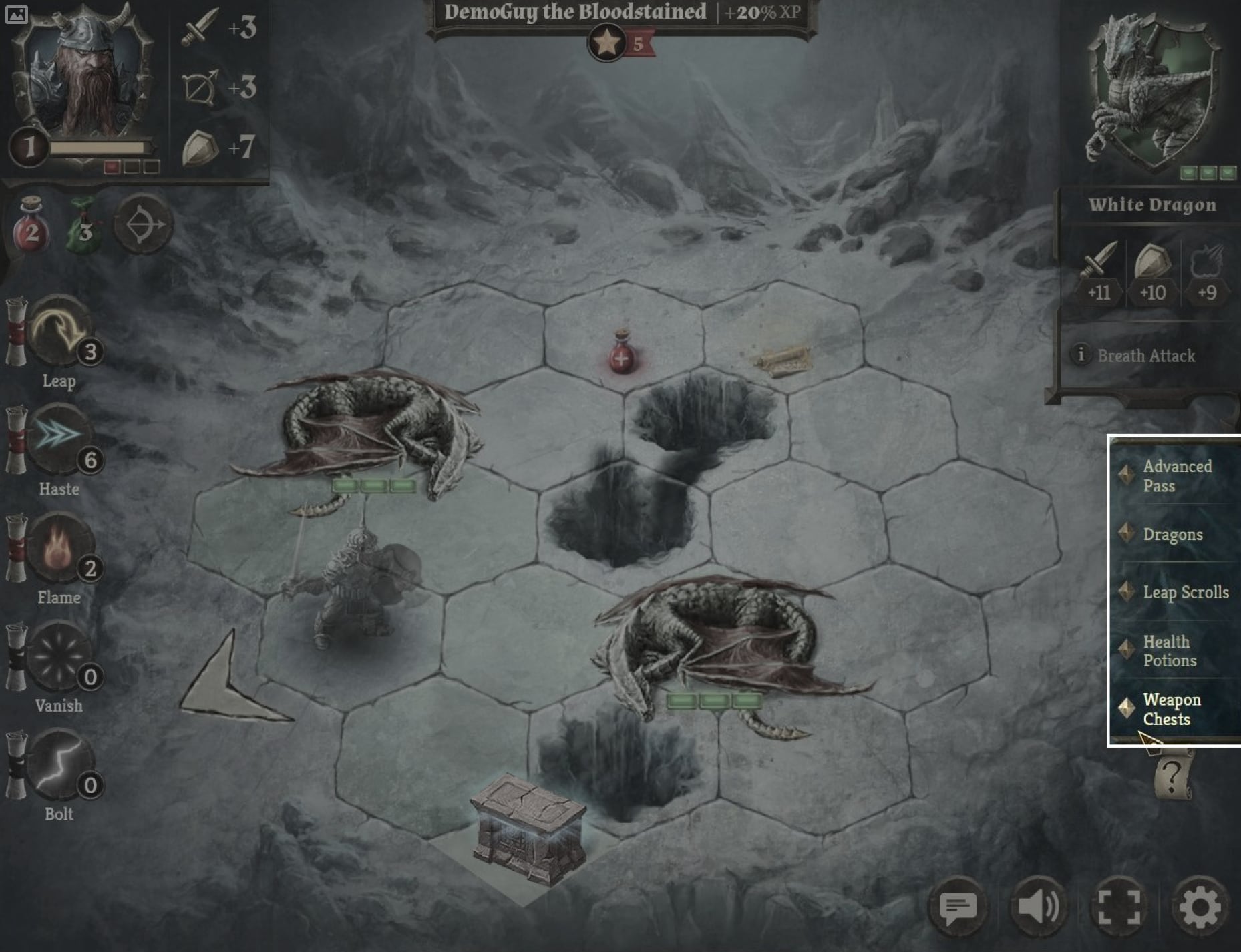 For more detailed information, you can look at the Rules Page and the Monster Manual. Dungeoneers also has a Discord – [discord.gg]  where you can get advice or chat about the game.

But the best way to learn … is to play.

This is all about Dungeoneers – Basic Gameplay Tips – Combat and Stealth Guide – Playthrough; I hope you enjoy reading the Guide! If you feel like we should add more information or we forget/mistake, please let us know via commenting below, and thanks! See you soon!