How do I build a 3000 point fleet? Silver-ranked vren55 will attempt to explain the roles of different ship hulls, the roles a fleet can fulfil, and the general principles to designing a fleet.

Designing even one multiplayer fleet of 3000 points fleet in Nebulous tends to be very overwhelming for new players. There are also a number of theories/suggestions, people literally telling you exactly what to do in the community.


Lieutenant Commander Vren55 here will instead just give some general tips on how to design a 3000 point fleet. Mind you, these are his opinions, so you’ll probably find something different but I hope that these would help.


First of all though, let me go through the hulls that various fleets can use, what roles they can fulfil. In Part two of the guide (work in progress) I’ll go through the roles that various fleets can fulfil and why you should bring them. In Part three (work in progress), I’ll explain the general and very important principles one needs to consider when designing a fleet.


I would also strongly recommend people watch JDEE’s Video on Fleet Building as it covers much of the same points.

Every ship hull has a purpose. In this section of the guide, I’ll introduce you to some basic ship hulls and their roles. 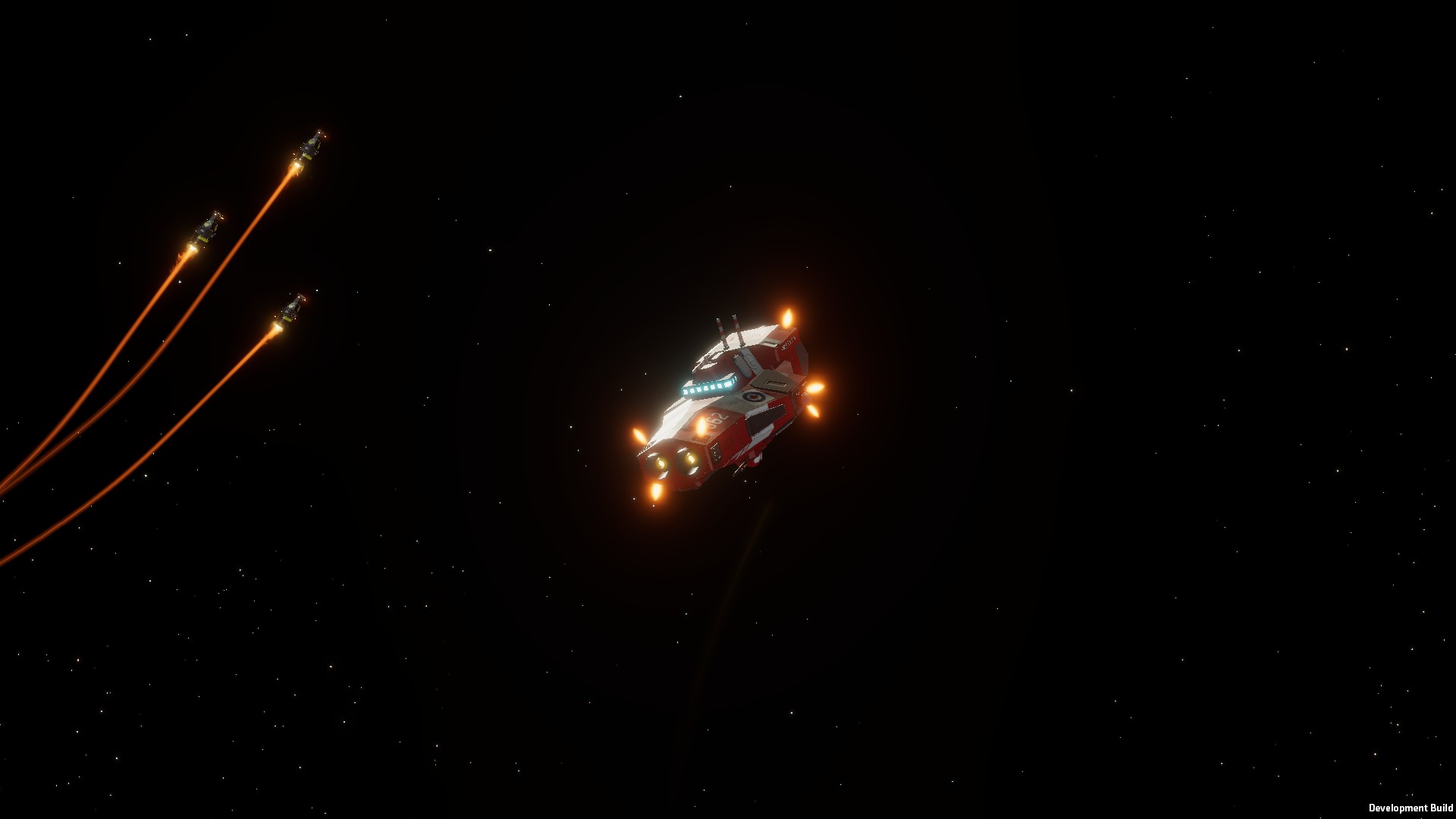 Why do you want to bring a Sprinter?

You bring a Sprinter for two reasons. You want to swarm sprinters, or you want to bring a scout ship. If you are swarming sprinters, you want to overwhelm the enemy with small targets so that you can kill them with either torpedoes at close range, with missiles at longer range, or with a horde of guns.


If you are bringing a sprinter in a heavier fleet, you want to equip it for scouting. This means you either fit it with a Spyglass for intelligence, or if you want to get fire control locks, a Bullseye. There are such things as point defense corvettes, but having a single fragile corvette act as point defense isn’t necessarily the best idea.

Why Bring a Raines?

Raines are either brought as the primary ship to fleets, or as supporting ships.


If you want to build your fleet around multiple Raines frigates, you can specialize as missile players as the hull type allows you to bring a lot of missiles and fire them in salvoes from MLS 2 or VLS 16 mounts. You could also employ a gun frigate swarm with supporting Electronic Warfare turrets.


If you want to employ a Raines as a support ship, you’re typically using it to support heavier warships such as Vauxhall, Axfords and Solomons. Players usually bring Raines Frigates to add a little bit of Electronic Warfare, Scouting, a little bit of Point Defense or just something to deal with pesky corvettes. A properly equipped Raines class frigate can do all of that as it’s an excellent support ship. 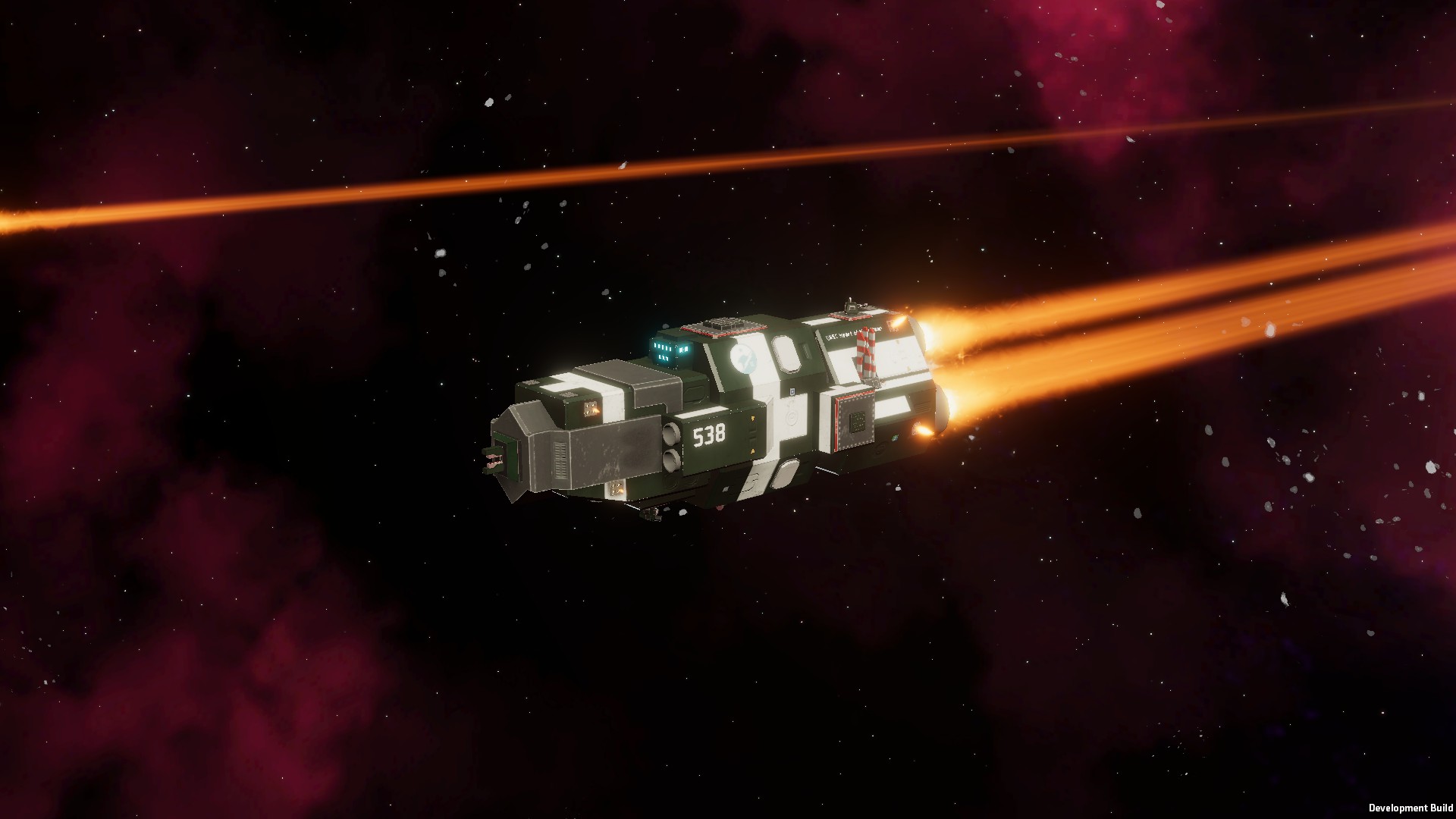 Why bring a Keystone?

Keystones are either brought as core to a Keystone pack (usually of three or more Keystones) or to bring additional “oomph” to an existing heavy fleet. They are often supplemented with support ships of the Sprinter and Raines variety that bring either scouting intelligence, and/or Electronic Warfare capabilities that can be used to protect a Keystone pack and negate some of the vulnerabilities of the ship.


Typically the composition of Keystone-centered fleets are dictated by the spinal mount of the Keystone. A Keystone Railgum fleet would require a lot of spotters to assist the Keystones with firing their railguns or missiles (which rail Keystones often bring). A Keystone beam-missile fleet will often bring significant Electronic warfare through an additional frigate or sprinter to protect the Keystone pack as they close in for a beam attack.


Keystones, particularly beam Keystones, can also be used to augment Axford Heavy Cruiser fleets, providing the much needed alpha damage to take out capital grade targets that the Axford can’t take out. 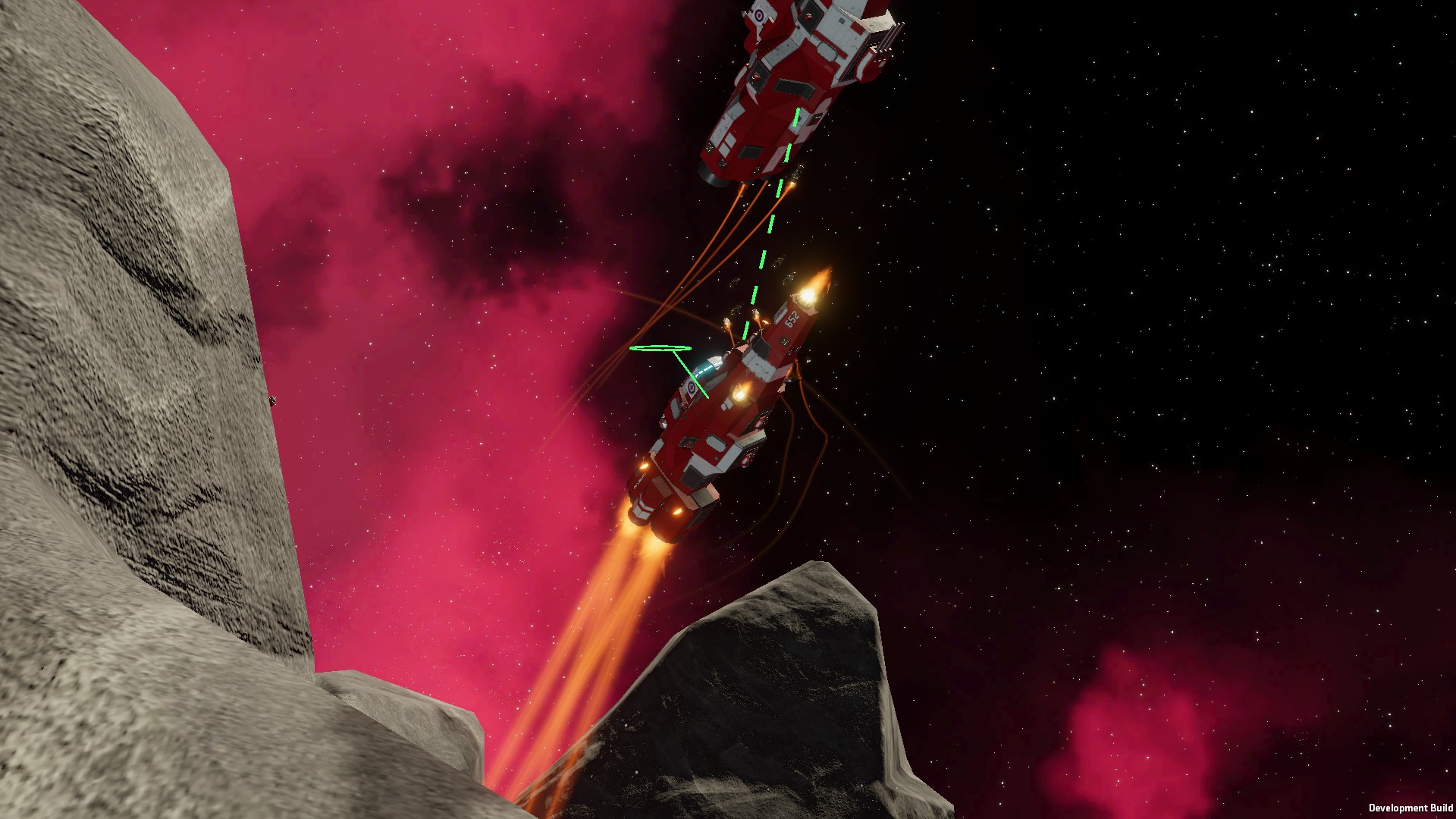 Why bring a Vauxhall?

If you’re using a Vauxhall, you’re usually building a light cruiser pack with maybe a single Raines frigate for support. Vauxhall builds have generally become standardized, which means if you bring a Vauxhall fleet you’re bringing:

There is…a…very strange fleet though you could bring with a Vauxhall and I’ve seen it only once and that’s because I’m the only person I know who does it, but I’ll get into it when I talk about perhaps the strangest ship in the game in that it can be accompanied with basically anything. 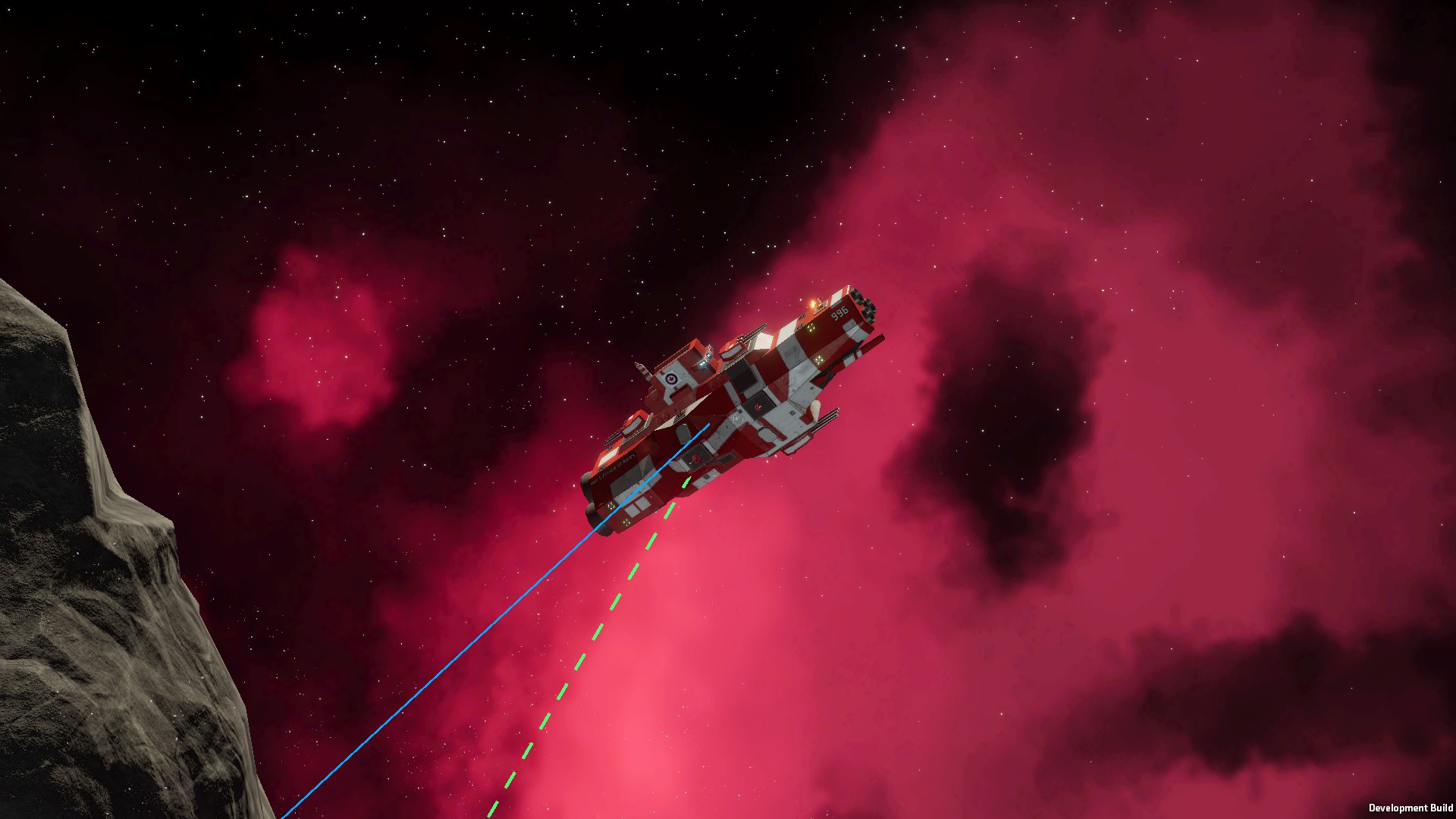 Note: I’m an Axford main and I play a variety of Axford fleet types so keep in mind that my advice here is going to be more detailed than any other section because I’m a bit biased toward this hull.

Why should you bring an Axford?

When a player brings an Axford, they’re committing to building an Axford fleet, which is a small group of ships supporting a heavy ship. As to what they want, that’s up to the weapons you decide to build on the Axford and its supporting fleet. This is because in my opinion, an Axford is primarily a heavy ship that benefits best supporting smaller ships, and from being supported by smaller ships.


To go through the varieties of the different Axford fleets out there would take forever, I have spent hours designing and tweaking a series of flotillas that all perform differently but I will make a few comments on the common builds.


Dual Axfords – common build type where two Axfords are deployed with 450 cannons. They can be quite tanky and have good point defense, but suffer heavily to Ewar and a lack of intelligence due to the fact they have to be deployed together. This allows a single jammer frigate to completely blind the two Axfords. Use this build only when your team has adequate and coordinated scouting.


Dual Axfords + scout corvette – This somewhat uncommon build type rectifies the key problem with the Dual Axford with a single scout corvette. You wouldn’t think that this would make a large difference, but it really does as it counters the weakness of the lack of intelligence and scouting ability of the former. However, this build leads to both Axfords being VERY under-built and so often requires a Dual Axford + scout corvette player to have one ship be the Cannon Axford, and the other being an under-built Rail Axford.


Rail Axford with scouts– This common build features a single fully kitted out Railgun Axford with a very fast reload that relies on supporting Raines or Sprinter scouts to lock onto enemies, usually around three. It’s a very common and powerful build as it offers more scouting than a rail Solomon + scout build and a Rail Axford is much fast compared to a Solomon, enabling better firing angles.

a. A missile-beam Axford with supporting frigates and/or destroyers

b. A beam-rail Axford with jammers and point defense.


Cannon Axford with support ships– The 450 cannons are a weapon that naturally gravitates to an Axford, as the weapons are cheaper on the power and point requirements, which enables more points to be devoted to point defense, supporting ships and manoeuvrability. The sheer variety of support ships that can accompany a cannon Axford are insane, and I almost exclusively specialize in this field. The builds I have run are: 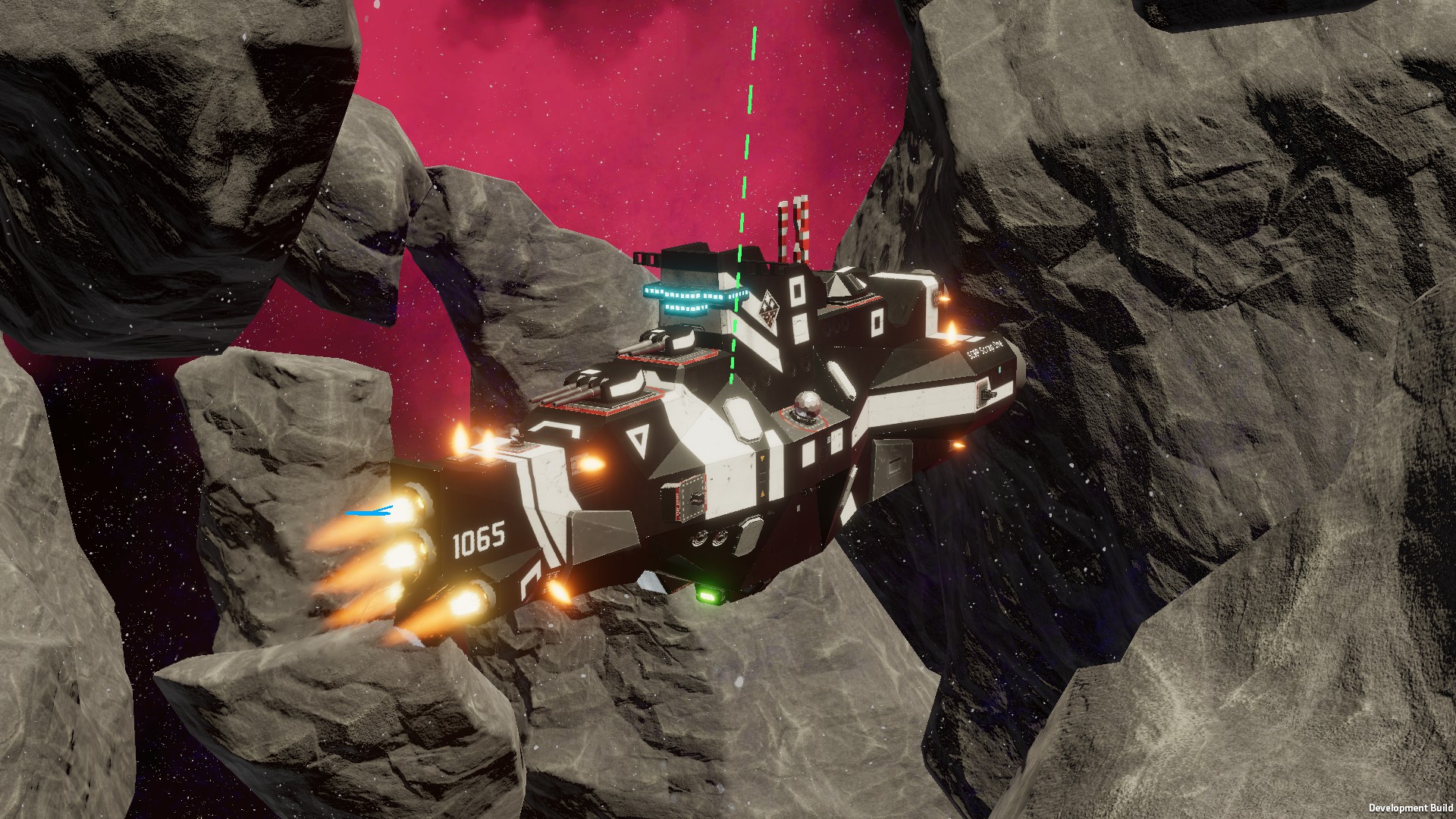 So why bring a Solomon?

To bring a Solomon is to gamble. If you bring a Solomon you are gambling hard that you are the one to bring the most powerful ship frame in Nebulous Fleet Command and do insane amounts of damage. A well-employed Solomon supported by its team will rack up a ludicrous amount of damage, tank hundreds of hits, and utterly devastate an enemy fleet. Even a moderately well-employed Solomon with its scout frigate or corvettes can land hit after hit of Railgun, Beams, or Cannons, ripping apart enemy Axford cruisers, which no matter their variety, must treat Solomons with great care.


On the flipside of the coin, if a player brings a Solomon, they also run the risk of being the target of an ambush, focused down, blinded by Ewar, missile-barraged to death, and utterly destroyed before they can even get 10K damage. I have seen so many Solomons who barely break 3k in damage done. This is because everybody knows how dangerous you are, and if they can see you, which they have a good chance of because of your huge radar signature, they will shoot at you.


This is also whyRail Solomons with Scouts is one of the most common and usually most effective build in this version of Nebulous, at least in 3k battles. These builds use the Solomon hull’s strength, its ability to have a lot of heavy railguns, and have them stay out of sight by employing the Railguns massive range. Of course, if a player’s Rail Solomon is found, then they’ll get focused down by Railguns or Missile-barraged.


The Gun Solomon with Scouts or Jammer ship is also common and on the surface, it has some benefits. By virtue of the only Solomon able to use quadruple drives, it is more manoeuvrable and flexible than a Rail Solomon. However, it suffers from the fact that it does the least amount of damage compared to all the other Solomon builds and it also still the priority target due to its visibility.


The Beam Solomon with Scouts or Jammer ship is another common build, sacrificing range for an insane amount of close range firepower. Battleshorting is commonly used in these builds to fire the beams of this ship at close range, and most fleets will die when encountering a Beam Solomon at close range. The problem with this build however is that get caught in the open, or even seen charging to make your attack, and you will get shredded and focused down.

Hybrid Solomons, usually beam-rail Solomon builds are also employed frequently in Nebulous, but they tend to be quite situational. This is because if you are found as a Railgun Solomon… you’re not really doing your job as rail artillery very well. Sacrificing that extra rail gun might not be the best idea, but having a close in beam available can also be useful against a corvette swarm.

Make sure to always bring a scout ship or jammer ship when bringing Solomon. It already lacks the manoeuvrability, Electronic Warfare to gain intelligence, you do not want to blind yourself by having no scout ship.


That’s all for Part 1 of this guide. Part 2, Fleet Roles is still in progress. Leave a comment if you think I’m wrong, or if you think I’m right. This game is very deep and things might change in the future.

I hope you enjoy the Guide we share about NEBULOUS: Fleet Command – How to Build a 3000 Point Multiplayer Fleet?; if you think we forget to add or we should add more information, please let us know via commenting below! See you soon!