Everything you need to know before you start to mod the game.

Ever wanted to make this garbage gun more useful? Something seems to be too OP for you? Want to make an invulnerable meme machine? Or making a global serious rebalance mod? This guide is there to help you.


Do not forget to check my Total Rebalance mod: Nexus – [nexusmods.com]

Disclaimer: the guide is still not complete and some sections are not finished/properly described. The completion deadline is indefinite.

The game keeps most of its stuff in .seria files – be it a save, ship file or a config. It’s useful to understand it before moving on other things.


.seria consists of nodes which are delimited by parentheses. Parentheses are always on a new line and there is no other stuff on the same line. All nodes except the root also have a header – some attribute-value pair, where a value is typically a some int. Header value shouldn’t be unique. Example of a non-root node (contents replaced by “…”):

Node contents may be a combination of the following:

That’s how the game handles arrays. For example, 360 “m_sectors” entries denote a firing or a sensor arc in a ship file, one for each degree.


If you’re going to parse/edit .seria,

That will break the file.


That’s basically all you need to know before parsing a .seria file; part configuration files and even saves follow this structure, so you can potentially modify saves with this knowledge.

OL.seria holds a first fraction of modules’ parameters. Most of them (if not all) don’t require keeping their states in a save file, i.e. you can alter them and see changes in the game immediately after booting + loading a save/ship file. It also holds the parameters you are most likely going to tweak – weapon clip size, reload speed, cost, fuel amount, engine thrust/consumption and many more.


This is a simple two-level .seria file, where each part got a

entry without nested nodes. The most potentially interesting entries are:

The list is incomplete but contains the most important things.

This file holds another (bigger and more technical) fraction of module stats. These are being written in a ship/save file – technically, a parts.seria entry is being cloned with some minor changes/additional attributes. That means that anything you alter in the parts.seria will not transfer into already existing ship files and saves. Only parts freshly picked from the shipworks will have new stats.


The file structure is more complex:

It may have not only attr=value pairs but also an additional level of nested nodes. The child node types are m_mesh (single), m_sprites (multiple) and m_slots (optional, multiple).

A mesh structure is fixed:

Note: the X/Y axes are directed right/down respectively. If you want to visualize a mesh in-game, simply select a part and its white contour will be its mesh.


The game doesn’t have any particular mass stat but computes the mass with “Mesh Volume * m_density” formula. A mesh volume is a min(mesh width, mesh height) * mesh area, where mesh area may be computed with the Gauss formula for polygon. So, if we change a side of a square mesh (keeping its square) the mass will grow cubic; if we extend the longer side of a rectangle mesh then the mass will grow linearly.

The sprite structure is a one-level node with a variable amount of attributes (technically, with the same but some have implicit values set).

The sprite attributes are not well-studied yet; here are some I already know:

The list of parts on the first nested level is not complete — these are guns, legs, gimbaled engines and dummy nodes without mass and density. The rest of the modules are children of the m_children=31 node:

The first m_children=15 child node there is unique – that’s a bridge:

And finally – the m_children=47 node, which hauls the ship’s global stats:

(The abracadabras are cyrillic decoding issues; everything looks OK in the game)


This node contains lots of ship global stats, which define how far/fast/long it can fly/see/be seen. It’s important to know that there’s no sense to change them if you want to alter ship’s speed, range or sensor strength; these are used mostly for spawn computations or GUI visualisations. What’s really important there is the m_flagship flag which you may set to “true” is you want the ship to be recognised as a flagship.


If you want to mess with ship stats, it’s better to change ship module stats and then force the game to recompute global stats. Module entries are very similar to ones in parts.seria, with some differences:

Read the corresponding guide section about ship updating after you changed the module values.

This section is under construction, since I’m styding this at the moment. But with a save editing you can potentially do:

You can also change your cash bonus there (“m_scores” root node attribute, e.g. m_scores=76886) and unlock ships (including hidden/unused/AI-only) by flipping a corresponding flag.

There are two main reasons to edit localization files:

Localization files are located at Data/Dialogs folder. Refer to this guide for details:

There are two entries you may want to edit if you want to add a ship desc:

A “SHIP_NAME_*” entry is mainly needed for Russian version where it allows to add a cyrillic ship name. The “*” should be replaced with a ship “m_name” root node attribute value (or a “m_ship_name” in ship global stats? They are mostly the same).

“SHIP_DESC_*” is what you’re looking for if you want to add a description visible at a campaign start. Note that a ship name plugged in “*” is capitalized there. Also note that a tag and a text are being separated by tabulations and have no newlines.

If you want to add a module entry there, you will need an entry for a name, type and description (MDL_*, MDL_*_SDESC, MDL_*_DESC where * is a module m_oid).

Dialogue files also contain some rewards/penalties you get from events. While some outcomes are being hardcoded (like new ships, forced stays, no repairs/refueling in a city, …), cash/rep/morale may be altered there.

You may also tweak a dialogue “direction” in terms of sprites/fade effects.

Before we move on making new parts, let’s denote what we won’t be able to do:

The process is very similar to the one described in this guide, with minor alterations:


The pipeline is following:

Now the last module category will be replaced with the module you just created. Note that you don’t need an entry in parts.seria – once you install a part on a ship, it will be written in a ship file and will only refer to OL.seria. 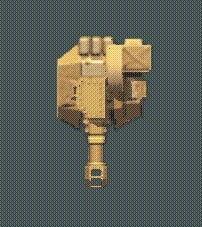 The game got some unsused sprites, but there isn’t much. OTOH, you can still create new visuals if you are creative with the sprites you already have. For example, the M-22 180mm cannon was created based on a Mk-1-180 sprite with a new barrel made of Sprint+flare and a muzzle brake made of a hull block.


Don’t forget to create corresponding entries in dialogue files, otherwise the name and description will be empty.

Another potential mod you may want to develop is vanilla ship replacements. Vanilla ships are treated in a separate way and are kept in Objects/Designs folder. They cannot be deleted in the game neither overwritten in the shipworks.

If you’re going to replace a vanilla ship with your own, the pipeline is following:

Note that from version 1.151 the game won’t generate snapshots and will derive them from a ship file, so the last step will be redundant and the “m_card_snapshot” won’t be present.

You may want to update all the ships (including vanilla) after you tweak parts.seria or ship modules. There are 79 vanilla ships, so pick a vacation and start from Archa…


JK, lol, there are some mechanisms implemented which are intended to help you with that:

If you launch a new version of the game first time, it will update everything in Ships folder and will place the old copies in Ships_backup. What it does recompute:


However, it won’t pull all the data from parts.seria by itself. If you modified the parts.seria and want a ship to get new values, before performing the step above you need to alter part entries in a ship file first. I have written some Python scripts for that by myself, and will release them soon.


So, the ship update pipeline is the following:

HF is a fascinating game, and as any fascinating game a mod support will significantly contribute to its life cycle. Assuming that it’s a two-people pet project, i’d vote for filling the game with content by players and focusing on an extensive mod support by devs, as many other great games (e.g. Rimworld) do.

Textures – how to edit and add some new.

Levels – how to manipulate them in a meaningful way.

I hope you enjoy the Guide we share about HighFleet – HighFleet Modding Guide Tutorial; if you think we forget to add or we should add more information, please let us know via commenting below! See you soon!