I’ve played a few endless runs with Naran, the baseline having been the other Naran guides on here and while those were awesome, I think some nerfs on the bleeding edge version might have made them a bit outdated for when EA ends in a week.


Still all credits for the original baseline ideas still go to the original guide creators – mixed with some new ideas of my own.

Why another Naran guide?

Admittedly the other guides about Naran are a lot more refined and are what this guide is based on to a degree, however I added some new things and ideas, that alter the playstyle and viability a bit, especially since on the bleeding edge version there have been some more nerfs to that Naran playstyle.


Also this is my first guide, so I’m sure it wont be the best.

For one a lot of mastery options seem to have changed. Scattershot can’t be 0AP from masteries anymore and…


more importantly however, Chorus of Abating is limited now, as is Chorus of Intimidation. You dont really want to make CoA into another SP consuming card though I think, as you need your SP for Final Verse, which is now limited and automatically an SP using skill as well.


So this guide sets out to create a new deck, that will somewhat play around it.


Just as a disclaimer though, 1.5M dmg turn one is not something you can achieve with this deck.


Also I did not want to limit myself entirely to mettle effects, so I am using tempo and glamour as well albeit to a very small degree.


As a result of these changes, Naran can now still clear trash easily turn one once a certain point is reached, still deal tons of damage to bosses, oneshotting those atleast on normal difficulty for quite a while and provide insanely powerful benefits for all of her teammates, should you prefer to play in a normal endless run compared to a solo one.

A very rough outline of a decklist

Well what can I say, I’m lazy, so I’ll just list what deck I used here. There has been NO finetuning however, so this can still easily be more optimized.

1x jack of all trades, mastered for dispel, runed for intrinsic.

3x chorus of abating, mastered for inspiration if you dont have twisted gaze, removing limited if you do

6x verse of abating, mastered for dispel (not that important, jack of all trades is better as it is aoe dispel)

2x rhythm of steadiness, runed both for str scaling + 25% in armor.


Just draw more with final verse till you draw your last copy of chorus of abating and then get max inspiration again with melodic verse/ free verse of abating.


if you didnt have chorus of intimidation on hand, great. they now only cost 1 bc you drew them with final verse.


play 1 or both on the elite/boss as you can while getting back inspiration with melodic verse and free verse of abating and keeping 1 AP for scatter hit.


Look at the dmg numbers displayed. if you cannot oneshot, play bardic expertise. it gives guard, crit and channel to all allies – huge amounts of those. if you can already oneshot everything just save the SP for the next fight. 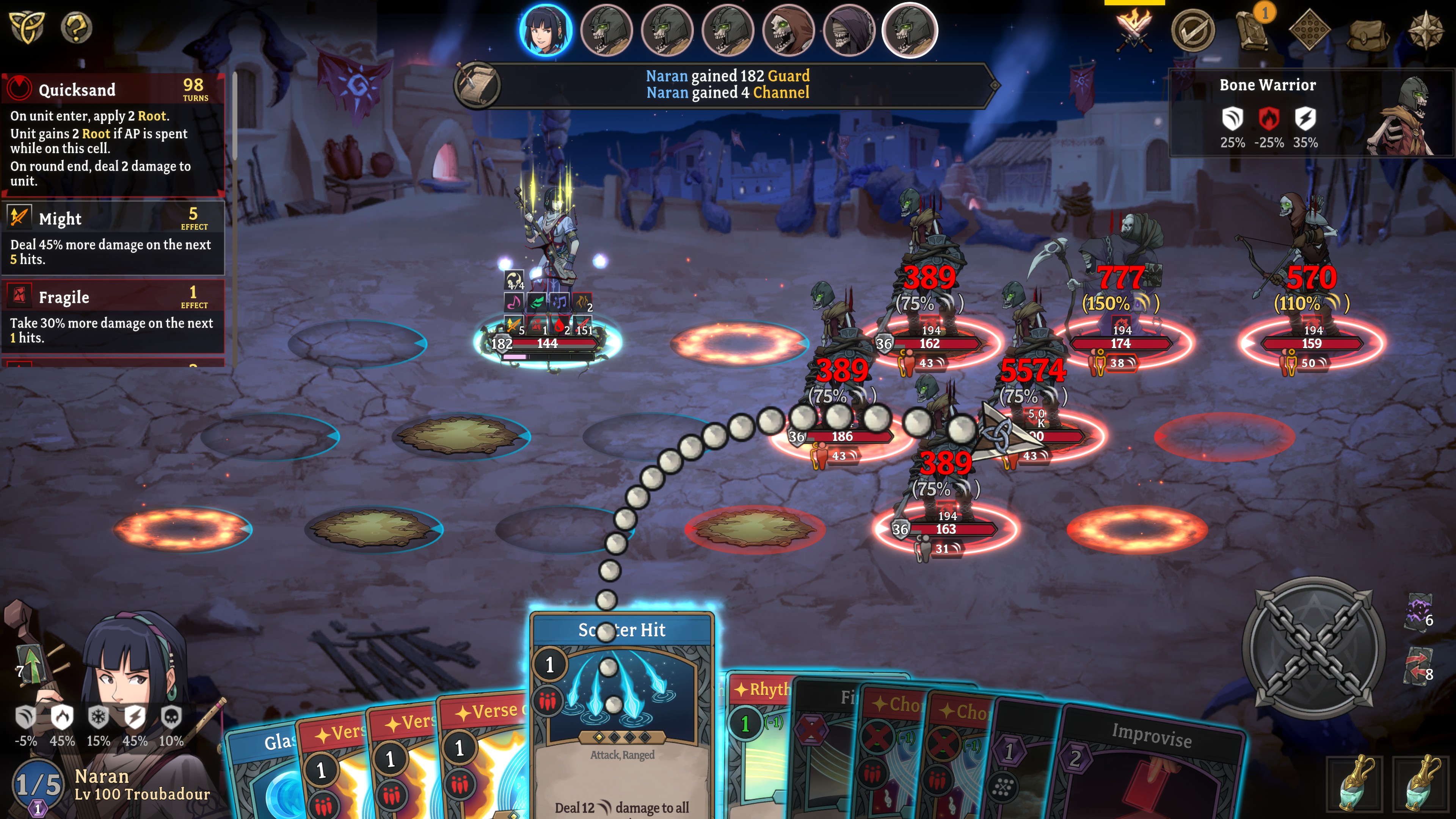 Yes, that guard is from 7/7 inspiration bardic expertise. It will go to all allies, as would 7 channel and most of the crit. Some of that was from jack of all trades. This is why this build makes such a great teammate as well.


So let’s talk about Rhythm of Steadiness. This card is for any fight, that goes beyond turn 1. It gives a generous amount of guard, but more importantly, it will probably max out your inspiration (mine could give 15 inspiration). If you have agi stacks, they can help reduce the cost, as can drawing them with final verse. Melodic verse is expend, so you would run out of those eventually.


Should (for some reason) the fight go longer, this deck scales insanely fast and hard because of those RoS. You will keep growing your max inspiration stacks, making CoA and especially CoI scale harder and harder.

Currently, though I am sure it will be nerfed in the near future, the Twisted Gaze headgear will yield incredible results. With a tier 3 one you can get 2 SP per debuff played. If you can get that from the beholder boss, be sure to master your Chorus of Abation to remove the limited tag and cost SP instead of AP.


Another nice little boost is Ria’s belt that gives a Rap card, which you can then rune of the item for Fury. 40% more damage right there.

This deck is far from optimized. In my run I didnt get any AGI stack cost reduction for my RoS going, nor did I get myself a damage boost from fury. I am not even sure how big the card draw amount should be, as cards drawn by final verse would be cheaper. Nor am I sure if you want the CoA intrinsic cards, as drawing those from final verse would be better, though you might be unlucky and not draw those too early being stuck at low max inspiration. I mostly used normal gear that I enchanted without too much luck, else I would have loved to have more AP. I stayed at 5 AP for the entire run, until I got bored and ended it bc I grew tired of going to shops and forges and being disappointed not getting any upgrades.


As for talents definitely get anything that helps with SP generation, sometimes you get unlucky with the deck order and 1 more draw with final verse can make all the difference. As you can see on my screenshot though, I was able to run through my entire deck once with the amount of final verses and starting draw that I had.


If anyone wants to play around with this a bit and provides valueable feedback, I’ll be happy to update the guide every now and then, until there is another nerf that will require Naran to build pretty different yet again.

Hope you enjoy the Guide about Gordian Quest – Naran nerfed + build, if you think we should add extra information or forget something, please let us know via comment below, and we will do our best to fix or update as soon as possible!