Want to hurl knives like a ninja, Bullseye enemies 30 ft. away with a Great Sword, or Toss a hammer like a Norse God?


If you have, this guide aims to help you out!


The basic information within will get you ready to delve deep into Dredgers.

What is Item Throwing?

Throwing items is a basic action that many players already do without realizing it.


Anytime items are taken out of the inventory and placed on the map it is thrown towards the cursor/mouse location. Most of the time, stats are not well distributed to take advantage or see great results.


To get the most out of throwing items, characters need at least 14 – 20 Strength (Str.) before items are flung quickly across the room. With this minimal amount of Str., players can take proper advantage of throwing weapons, shields, and potions for fantastic damage and applying status effects.

Although throwing distance and speed is based on Strength, throwing damage is based on the item, class skills, and active passives. Despite the type of item, all damage dealt from throwing is considered as a melee hit.

Just like swinging a sword or drawing a bow, throwing an item exhausts one (1) hand which means two (2) items can be thrown at once. Attempting to throw items without an available hand will drop the item(s) harmlessly to the ground.


Hands/limbs recover quickly after throwing items compared to melee swings or shooting projectiles. Casting spells does not physically exhaust hands; so casting and throwing can be done simultaneously.

Thrown Items can critical after unlocking Fencer’s Critical Strike which scales based on Dex. This means Dex. heavy builds scale base damage and critical damage from investing in one stats (unlike projectiles or fists). Heavy Str. builds will gain the least from Critical Strikes, but is well worth taking after Berserker.

With the heavy lifting complete,


How to get the most from tossing items?


Keep four (4) to eight (8) weapons or items intended for throwing in your inventory that match your build’s main stats. For some builds (Chm. & Con. in particular), the best weapon(s) and item(s) to throw will change depending on available classes (E.G. Berserker, BloodWeaver, etc.) or combat situation (damage which bypasses armor).

The most consistent way to get many good items is by crafting them yourself. Taking early crafter and/or blacksmith levels will greatly improve the quality of items available for the rest of the run.


Frequently deconstruction unwanted items will make crafting desired items easier. With enough resources stockpiled, characters can produce as many items as desired without constantly needing to retrieving them (prefect for bosses). 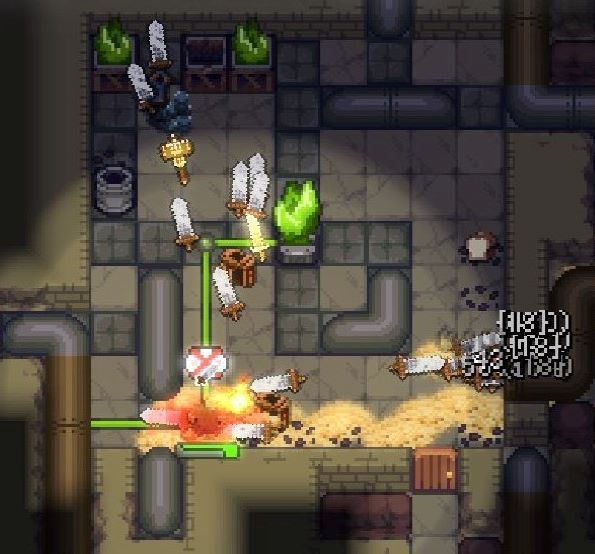 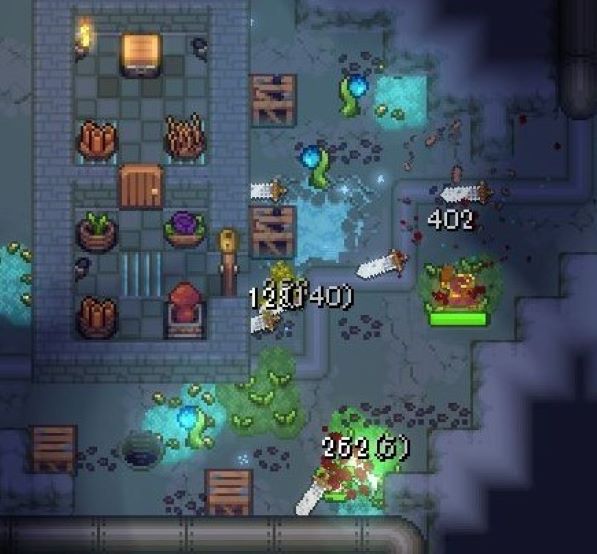 For melee builds, simply toss spare weapons before dash/lunging while paused (space bar). After striking with dash/lunge, pause and attempt to pickup the thrown items by pressing E. At the end of the dash/lunge skill, once again toss the weapons if your character ended up out of melee range.

Squishier builds should save their movement skills to keep away from melee or to dodge ranged attacks while kiting around picking up & re-throwing items. Taking classes with stuns can greatly increase the survivability of squishier builds.

Either found in dungeons or bought from a shop, potions come in two flavors offensive and defensive. At the start, every potion is unknown and their color(s) are randomized.


Defensive Potions are meant to be consume as needed to temporarily improve stats, recovery health, and apply other useful effects.


Before quaffing or throwing it’s crucial to identify potions; otherwise a player may heal their foe or poison them-self during combat. It’s suggested to use an identify scroll or test a tiny bit of unknown potions in a safe location before taking a chance mid-combat.

Below are sample builds to help players learn and experiment with suggested class choices for late game.


None of these builds are definitive as many races do great following different stats or class choices than suggested below. If there are builds you would like to see added please comment.

Starting characters will typically do more damage with fists than swinging starter gear or torches around. A lit torch will apply burning to enemies that bypasses armor; so it’s always nice to apply that by throwing them.

Deeper into the dungeon where enemies become fearsome, Charisma scaling gear paired with Bard song and Artificer enchant can do better than most other gear selections.


With Artificer’s enchant skill or Scribe’s enchant scrolls, try enchanting gear for Charm (+1 Chm. per level) to get the most stats out of bard song.

Punch with fists (no weapon equipped), throw lit torches, and dismantle items for crafting resources. At Blacksmith, craft a pickax to mine additional metals and create 6 to 8 Great Blades (400% Str.) or Great Axes (150% Str + 50% Con.) to throw.


Berserker is the breakthrough point as Death Toll increases Str. and Dex by 100% of your Con. after each kill for long periods of time.


If you happen across a Jar of Blood from dismantling, ingest it to unlock the BloodWeaver class. It’s Con. oriented skills will greatly increase your damage and healing potential.


With so many points in Def, an Outlaw’s Hood (50% Def -> Dex.) will provide free Dex. that Fencer’s Critical Strikes will turn into more damage.


Monk is another highly recommended class as Meditation will add 100% Def. to the character’s Spd. status.

Stats: Str. with some Con.

Punch, throw torches, and dismantle unwanted items. With Blacksmith, craft a pickaxe to mine additional metal and create 6-8 Great Blades (400% Str.) to throw.


Having two (2) levels in Fencer’s Disengage (toggle) is a great way to stun enemies and get out of close combat. A single level in Fencer’s Parry enables thrown items to deflect arrows and projectile attacks.


Take Blacksmith if you would like to throw or use knives, rapiers, and infusion knives (explosion damage). Specialized bows that apply status effects only do so when firing arrow and not when thrown.

Stats: Spd. with some Con.

Punch and lunge to unlock Knight’s Battle momentum which adds Spd. to Str. after a melee hits.


The trick is to hit a door or furniture before throwing items and engaging normally. At Blacksmith, craft a pickax to mine additional metals and create 6 to 8 Great Blades (400% Str.) to throw.

Race: Any that speaks or casts

Purchase Royal Slippers from the shop, punch enemies, and select a primary song (Str./Def. or Dex./Spd.).

Death Toll can be necessary for Str. and Con. builds to gain enough Dex. to crit when throwing items. Be careful when activating Berserk as it’s a high risk : high reward skill that makes players particularly fragile. Incidentally Death Toll can enable Domples to craft while in effect.

Consistently enables players access some of the best items in game without relaying on lucky drops or settling for items with awful modifiers. Requires positive Dex. or Int. to apply item modifiers yet the requirements are not too difficult to achieve even with Domple’s Big Stupid trait. Highly recommended for scaling well into late game even if not throwing items.

Unlocked by ingesting Jar of Blood or High Hp

Useful for Con. builds as it adds Con. to Str. (stacking with Berserker) and provides a ranged Con. attack which restores health.

Enables thrown weapons and shields to critical with enough Dex. Most Str. dominant builds will need Berserker’s Death Toll before their critical chance is decent enough. Thrown items can trigger Parry and deflect arrows, projectiles, and projectile spells. Toggling disengage can be a great panic button that stuns and puts distance between enemies and players quickly.

An additional dash, retrieve thrown items from afar, and stun enemies provides tones of flexibility. Players may also pull themselves through grated doors in the Melt and Sewers without using keys.

Paired with Fighter’s Heavy Hits, An Arm allows for melee swings using only one hand allowing players to swing and throw items at the same time. Thrown items can trigger Stunning Blows at range which is fantastic for keeping safe. Deliberate Strikes is great for damage but increases exhaustion too much for item throwing builds.

Specifically useful for Spd. builds as Battle Momentum adds 100% Spd. to Str. for a gargantuan increase in damage. Retaliation is neat but late-game enemies may have equipment or abilities which bypass armor. Armor Expertise is consistently a strong choice for greater armor selection..

Specifically useful for Spd. and Def. builds as Meditate increases Spd. by Def. or Def. by Spd. Either way it’s a great option to gain double stats points for little investment. Punches are another great way to damage enemies alongside throwing items for a true ninja, martial artist, or cultivator experience.

A class solely devoted to increasing damage throughout the entire game. Although skull collection takes up some inventory space, it quickly scales up any damage dealt. Taste their Fear is a great crowd control ability against groups as killing one will stun stop many others in their tracks. Target of Hatred is very good but applies only to a limited number of enemies.

Turns a Crafter’s extensive pile of resources into spells craftable on-demand (once an unknown scroll is identified or used). Quick access to as many teleports, identify, animate, and time stops as desired is immensely useful for any situation.

Become the master of time and freely stop reality from moving (some exceptions apply) for a while. With vastly more time to act, players can set up enemies for rather elaborate deaths or escape from certain doom. Just remember to fix time fluxes with Time Keeping before they get out of hand.

Thank you for using this guide and Pirate-Rob for creating such a gem.


I hope this information will be helpful throughout your future play-through!


If you find any missing information, mistakes, or lack of clarity please comment below.

This guide has been created for the express purpose of providing quality information to the community.

This is all about Dredgers – Weapons & Items Throwing Guide; I hope you enjoy reading the Guide! If you feel like we should add more information or we forget/mistake, please let us know via commenting below, and thanks! See you soon!