Ever used an Atlas or a Stalker as a missile boat? How about a Longbow as a brawler?

This guide explores taking Mechs out of their traditional roles and rethinking the way they are built. Some results are surprisingly effective, other are a bit situational, but fun.

We all get sick of running the same Mechs in the same configuration, just because that is what the Mech is supposed to do. So why not throw out the standard roles rule book and run any Mech you want in any role and see how it performs. I am writing this playing BEX, so you will see non-vanilla Mechs like the Longbow and Cerberus in this guide.

I have a real problem with the Stalker as an assault Mech. It is way too slow…. Most people load it up with some nice short range weapons and walk it straight up to the front line to smash the nearest Mech. Problem is by the time it gets close enough to unload its very impressive alpha strike, it is either chewed up by range attacks or its team mates have soaked up all the damage waiting for its arrival and can be half crippled.


So why not take advantage of the very good 47-50+T free space for LRMs. You negate the speed problem sitting at the back line, often behind cover. The Archer only has 41T in most variants and less armour. Same for the Catapult.


The standard STK-3F is a very common Mech, so you should be able to get one pretty early in career mode. When you get a STK-5S you can put in the extras like AMS and TTS. This build gives you 420 damage. The 2 x 20 LRM and 2 X 10 LRM allows flexibility with heat management and multi-targeting. The PPC is for added flexibility on long missions. You also have more armour than standard missile boats. 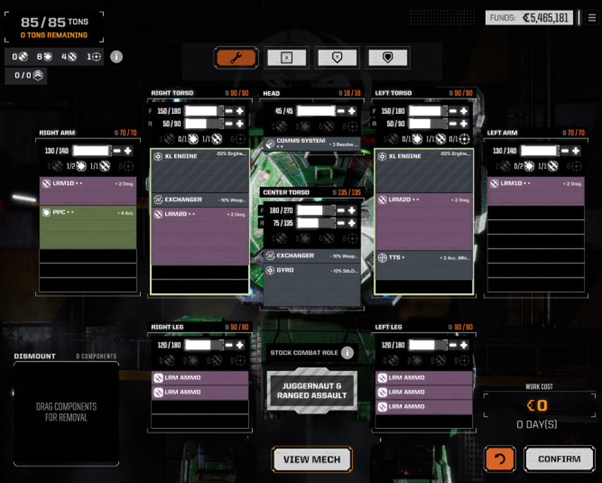 Everybody loves the Atlas as their prime assault brawler. I don’t. It is the same as the Stalker, too slow. Admittedly, it survives longer to close to point blank and turn most Mechs into scrap metal. I only use it as a mid / long range cannon. Guass, 2 x PPC, etc. I used a Battlemaster BLR-1G as my strike Mech for ages.


The common Atlas AS7-1D is no good, only 2 Missile slots. You need to find the AS7-1A, 6 missile slots. Just use the same set up as the SLK-5S above, but you get lots more armour and additional heat management. 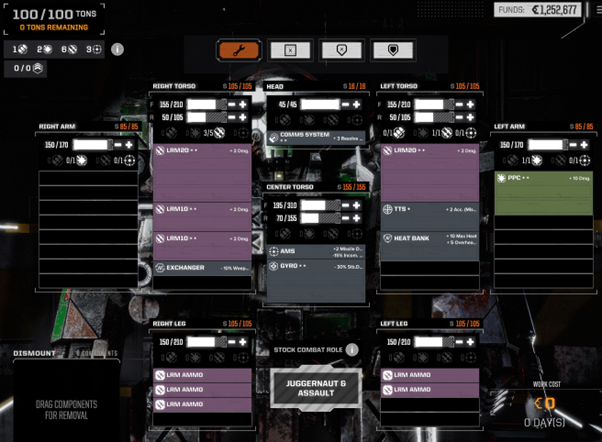 After I took the Stalker and turned it into a missile boat, I thought why not do the reverse. Take a LRM missile boat and make a close range striker.


The Archer and Catapult are too limited in free tons and armour, so don’t really work. The Longbow LGB-7Q is pretty effective with 2 energy and 6 missile, but a few more free tons would be nice. The LGB-7OW has more free tons, has 8 missiles, but loses the energy slots. The speed is still good, so can actually close on the enemy.


I tried various combinations of SRM 6,4,2 with a couple of lasers. Nice alpha with all the SRMs. Imaging the look on the AI as a Longbow charges up to them and unloads 24+ SRM into their face.

The Cerberus is my all time fav Mech with 2 x Guass rifles. Sit back and explode Mechs from afar.

I decided to run it as a hybrid close assault Mech. Take out one Guass and put in close range weapons. Mostly because I needed a replacement for my Battlemaster which was getting chewed up mid to late career, and I was running an Altas 1A as a missile boat, and Atlas 1D as a brutal sniper.


The 4 x laser and LB-10X makes it very flexible and good close range killer. I am sure I will revert it to a Guass cannon if I can fit three in late game.

Thank you to anyone who reads this far. I would love to hear anyone else with whacky, non-standard configurations. I will add other variation if I find them.

Hope you enjoy the Guide about BATTLETECH – Mech build configuration, if you think we should add extra information or forget something, please let us know via comment below, and we will do our best to fix or update as soon as possible!