This is an official guide by the 302 Interactive team, developers of the Commission 190. This guide covers core mechanics/gameplay for the game that we think you should know before getting started!

Starting a New Campaign
Before you make your debut as a don, check out the options available from the New Campaign screen. Mousing over these options will display additional information. 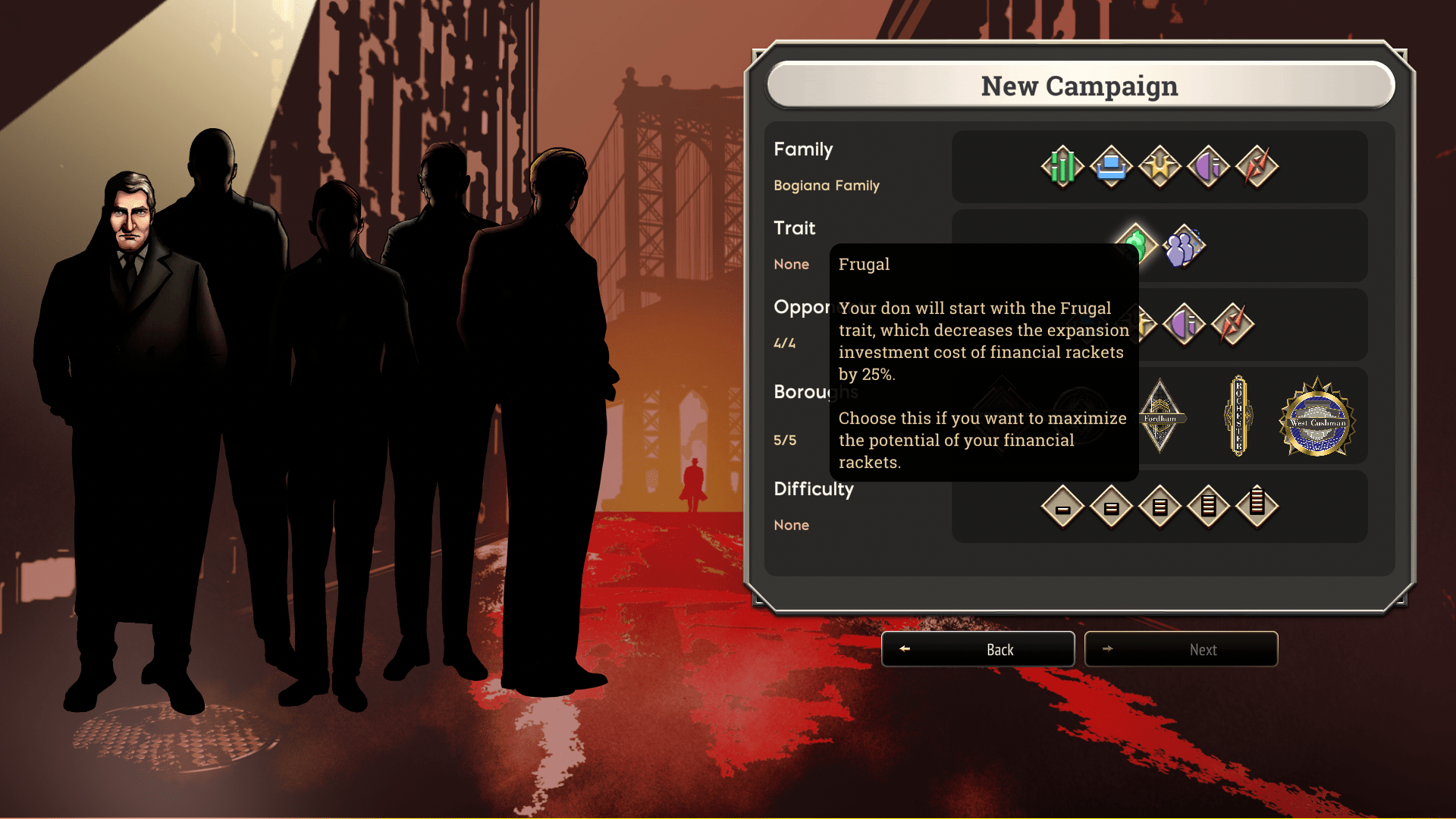 What should I do at the start of a campaign?
For those who want to jump into the game as quickly as possible, here’s the general gameplan:

The first thing to understand as an up-and-coming don is the hierarchy of a crime family. 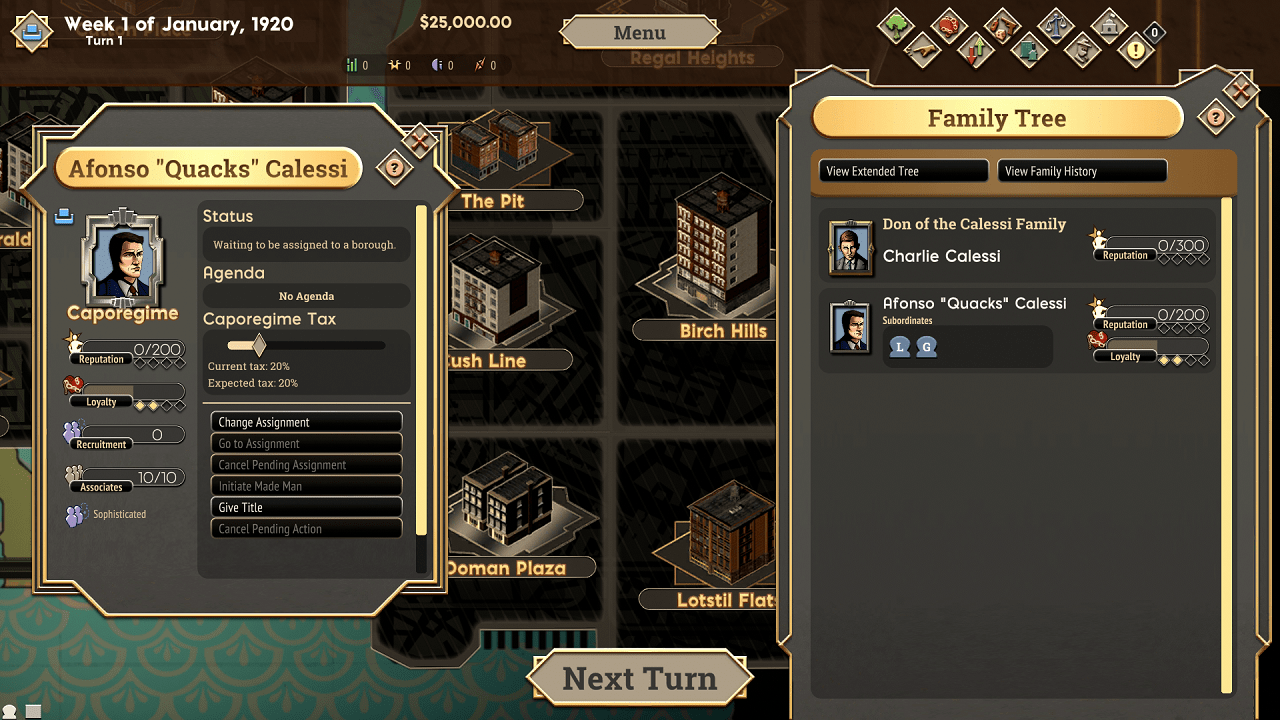 Don
The highest ranking member. Unlike other units, they are not assigned to a location on the map. However, their presence is felt through their trait, which applies a modifier to the entire map.

The don gains Reputation passively, which allows them to command additional caporegimes.

Caporegimes
The middle ranking members. They focus on expanding the family, and making sure their subordinates get a fair cut of the profits. While assigned to a borough, they collect Profit and Recruitment yields from the neighborhoods within.

Caporegimes gain Reputation while assigned to a borough.

Soldatos
The lowest ranking members. They do the dirty work of running rackets and defending territory. They are assigned to the neighborhoods within each borough.

Soldatos gain Reputation while assigned to a neighborhood.

Associates
These guys are not true "made men", as they haven’t been initiated into the family. Caporegimes will accumulate associates until they reach a cap determined by their Recruitment. Associates can be used to bolster soldato assignments, or can be promoted to soldatos themselves.

Rackets are illegal activities that generate either Profit or Recruitment for the family. 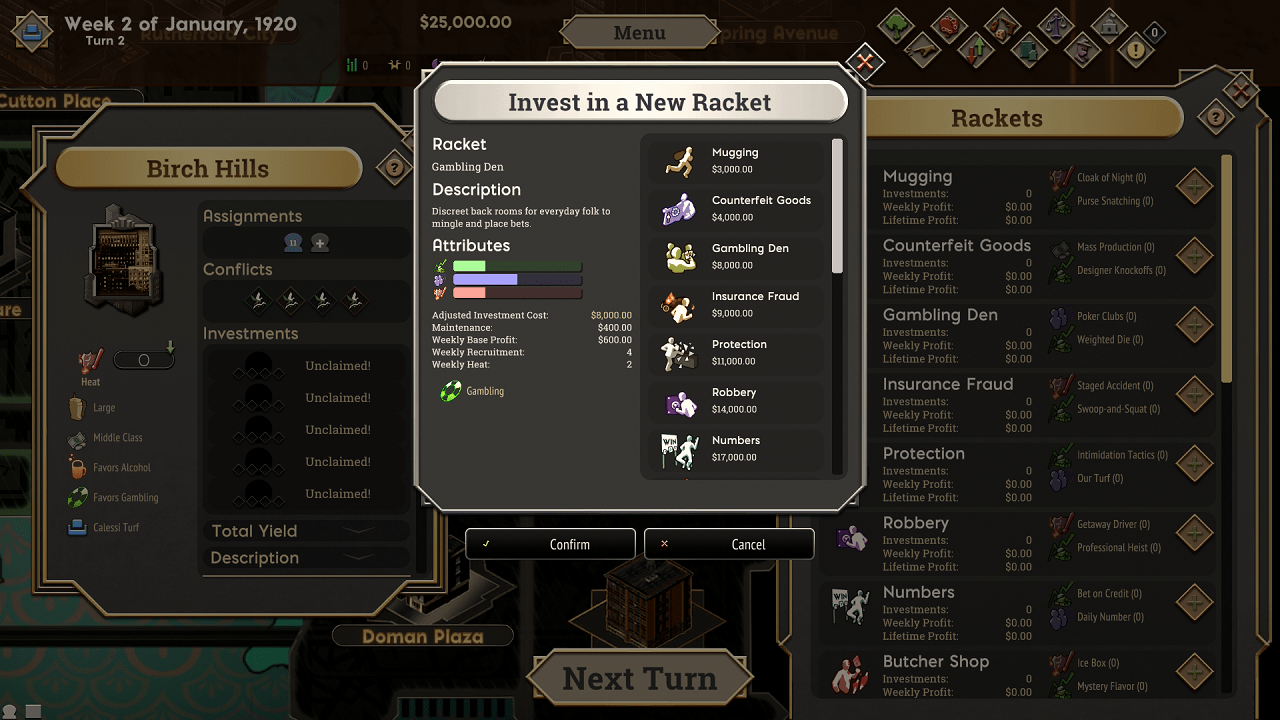 Archetypes
Each racket belongs to at least one archetype. Most traits, political policies, and other modifiers will target rackets with a specific archetype. Furthermore, many neighborhoods will provide a bonus or penalty to certain archetypes.

Heat
Most rackets also produce Heat (police attention) over time. By default, all allied rackets in a neighborhood will suspend their activity when Heat reaches a certain threshold, and the resume when Heat is low enough. High Heat means more down-time for your rackets, and also puts your soldatos at risk for arrest!

However, what if you want to operate in only a few neighborhoods? Well, you can expand your existing investments at the same cost, up to 3 times! Expansion investments provide less profit than a new investment in another neighborhood… However, they also provide a buffer against the investment being destroyed!

Which rackets do I invest in?
Before deciding what type of criminal activity is right for you, check the following:

This is all about The Commission 1920 – Commission 1920 Official Guide; I hope you enjoy reading the Guide! If you feel like we should add more information or we forget/mistake, please let us know via commenting below, and thanks! See you soon!