When a player hovers the mouse over an object, its description will update to show the names of the objects that are beneath that object.


It can be useful to know what is beneath an object, without moving the object to check. For example, a stack of counters in a wargame, or any other stack of tiles.


This function calls functions from the lua string library, which includes many interesting features. You can read more about them in the string library tutorial on the lua-users wiki.


This function works best if you have a way of identifying the objects in your game, such as the Tag functions in the TTS API. Also, the objects need to have names or some other information that can be added to the description. 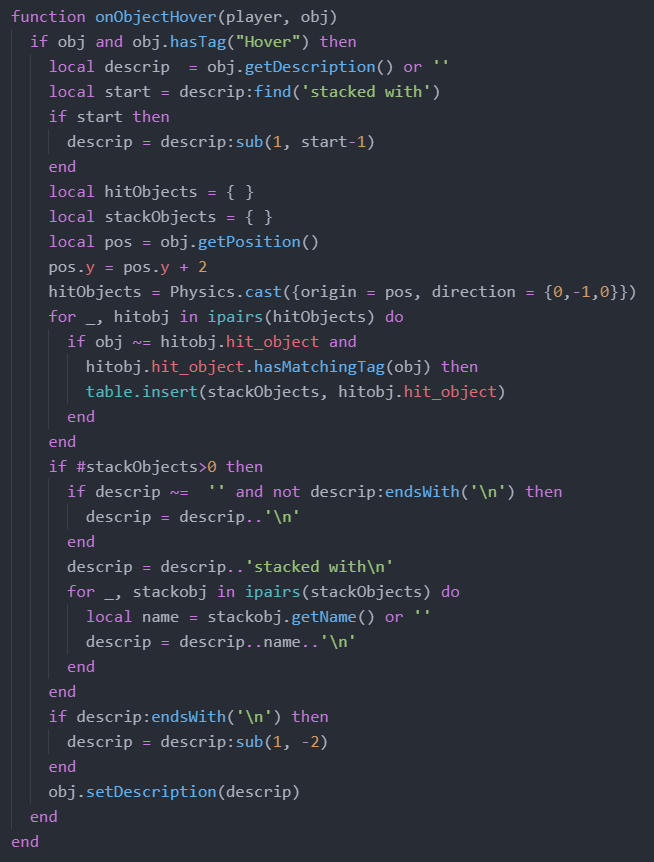 What the Function Does

In brief, this is what the functions from the string library do.


start = descrip:find(‘stacked with’) checks whether a string variable, descrip, contains the phrase “stacked with”, and if so it returns the index of the beginning of that phrase. In this case, the index is the nth letter in descrip at which the “s” in “stacked with” appears. This number is assigned to the variable start.


descrip = descrip:sub(1, start-1) If start is not nil (i.e., if the phrase “stacked with” does appear in descrip), then return a new string that includes everything in descrip up to but not including the index start. One is subtracted at the end so that the first letter of “stacked with” is not included. This new string is assigned to and replaces the variable descrip.


not descrip:endsWith(‘\n’) The endsWith() function is not in the lua string library but rather is part of the Moonsharp library that TTS uses. It returns true if a string ends with a specified phrase. Here, it checks if descrip already has a new line at the end, before adding one.


descrip:sub(1, -2) The function sometimes ends with an extra new line at the end of the object’s description, which looks strange. So, if descrip ends with a new line (and nothing after), descrip:sub(1, -2) returns a new string that includes everything in descrip up to but not including the last two letters in the string (i.e., ‘\n’), and assigns it to the variable descrip.


Note that lua does not delete anything from a string, but rather returns a new string that does not have what you want to delete.

This function from the TTS API returns a table of all the objects that exist in a certain area or direction. It can do many things.


Here, it uses mainly the default parameters to cast a line downwards from the object over which the mouse is hovering. For this purpose, it helps to set the origin of the line a value of 2 above the object itself. This seems to work best to capture everything in the stack.


Physics.cast() is fully described in the TTS API reference. It probably could be used to identify objects surrounding (rather than beneath) a certain object, but this Guide is limited to lines cast downward from an object.


Note that Physics.cast() will identify every object it intercepts, including the game table and other incidental objects.


Because of this, the function checks that obj ~= hitobj.hit_object, to avoid including obj in its own description.


Also, it is necessary to include some test to include only certain objects in the stackObjects table. Here, the object is included if it has a tag that matches the first object.

This function adds the names of the other objects to the first object’s description. If the objects in your game do not have names, then use some other information and replace the call to the getName() function.


This function leaves (i.e., does not delete) the list of objects in the first object’s description.


This should not normally be a problem, because the description only appears when the mouse hovers over the object. And the first thing the function does (when the mouse hovers over an object in the relevant group) is to check if the description contains the key phrase “stacked with”. If so, the function deletes that phrase and anything that comes after it.


So if the mouse ever hovers over an object in the relevant group, and no relevant object is beneath it, then the function will reset the object’s description.


If this does become a problem, please leave a comment and perhaps the function can be corrected to avoid it.

This is all about Tabletop Simulator – Show Objects Beneath an Object – Function Guide; I hope you enjoy reading the Guide! If you feel like we should add more information or we forget/mistake, please let us know via commenting below, and thanks! See you soon!