After scouring all the other guides I could find, I discovered that there are massive gaps in the knowledge base of the community. As a result I’ve put some information in this guide that I wasn’t able to find elsewhere, hopefully it helps someone.

In order to beat the Brutal X 4 level, there are a number of picks that need to be taken, almost all of thee below.


These add up to the maximum negative 10 picks for negative traits and they have the least detrimental effect of all the negative traits that I could find. Once you have cloning vats population won’t be an issue, decreased hit points and weapon damage are easily overcome just by dint of the fact that you’ll be fielding Titans right away and ground combat has become essentially obsolete with the most recent updates.


These add up to 20 points in total. Titans will allow you to very quickly (possibly within 55 turns of starting) field a missile Titan that can stand up to anything at this stage of the game, including Antarans. Tree Hugger allows you to ignore a lot of pollution, thereby maximising production. Subterranean allows you to immediately have 3 population Ultra Rich Asteroid belts which can churn out Titans. Resourceful is cheap at twice the price because it allows you to get the resource bonus after owning just 2 of one type of resource. 2 is fairly easy, 4 is very difficult. The last 2 picks can be switched out with spiritual to give an empire-wide bonus. Keeping these last 2 though means that homeworld production is maximised right from the start.


As far as race goes, they’re mostly the same, except for the experimental techs. The best 2 races I’ve been able to find with the best special techs, are the Humans and the Draylok.


Credit to this community page listing all the technologies.


Choose your race first. I suggest customising it as above and then saving under a special name, so that you don’t need to re-customise every time. Then click continue.


EMPIRE COLOUR, (dealers choice), EMPIRE COUNT (up to you, I prefer all 8 opponents), DIFFICULTY (start off maybe with Hard to test out these strategies, but eventually you can go up to Brutal X 4), EMPIRE NAME (your choise) and RACE NAME. (also your choice)


For the bottom options we have, RANDOMISE PERSONALITIES (up to you), DISABLE ATTACKS (I seriously suggest not choosing this because then you don’t fight the Antarans), ENABLE TUTORIALS, (up to you) and the 3 VICTORY CONDITIONS. (I personally just unselect all 3)


Lastly the right hand side options, SYSTEM COUNT (I prefer 200 so you’re not too close to your enemies), SYSTEM DISTRIBUTION (I prefer clusters), GALACTIC FERTILITY (suggest leaving on classic), GALACTIC RICHNESS (I suggest rich or Ultra-Rich), HOSTILE THREATS (this increases enemy count in enemy stacks and Antaran attacks) and GAME LENGTH (I prefer Epic)


Believe it or not, High Fertility and High Richness seem to cancel one another out and you end up getting terrible planets, so rather just pick one or the other.

Assuming you have chosen the picks outlined in part one, what you need to do is to immediately colonise an Ultra Rich asteroid belt, even if there’s a fantastic system with great resources. Unless you really get lucky, you’ll be needing to contend with pollution and so can’t use the entire production capacity to build ships.

1) Send your initial coloniser to colonise an Ultra Rich Asteroid.


2) While it’s doing that, probably 2 – 5 turns, build a few Freighters as fast as you can. My picks should be able to create the first in 5 turns. The first is to be able to support your Ultra Rich Asteroid Belt with food from your home world and also transport an additional 2 population to your asteroid Colony, 1 at a time. This will leave your homeworld shouldering most of the burden of feeding everyone, but it also means you can have a Missile Titan build by about turn 60.


3) Your asteroid colony should immediately build a starbase, then a missile titan. Once the first one is built, it will have some breathing room and can build a few Colony ships.


4) Research Automated Rover Bay then Research Lab then Aeroponic Farm. After that make any shield tech a priority. Xeno Mine and Imperial University are better in the long-run, especially on bigger planets, but they’re slower to get going and cost more production to build.

When you have 2100 credits, buy the Data Crystals. Once researched they will yield 7500 credits, plus a little research, enabling you to buy other things from him. I suggest first DESTROYED MAGAZINE 700 credits (Dual mass Driver, best weapon for the next few hundred turns), COMPLEX FACILITY 1600 credits (Armoured Ordinance Supplier), QUANTUM SCHEMATICS 1000 credits (Quantum Fusion Reactors), and SMALL SHIELD CAPACITOR 500 credits (Delta Shield) With these few techs you can create a very powerful Titan that can take on whole fleets of ships and/or Antarans. 8 of them can probably take out the MASTER OF ORION 2 ship. 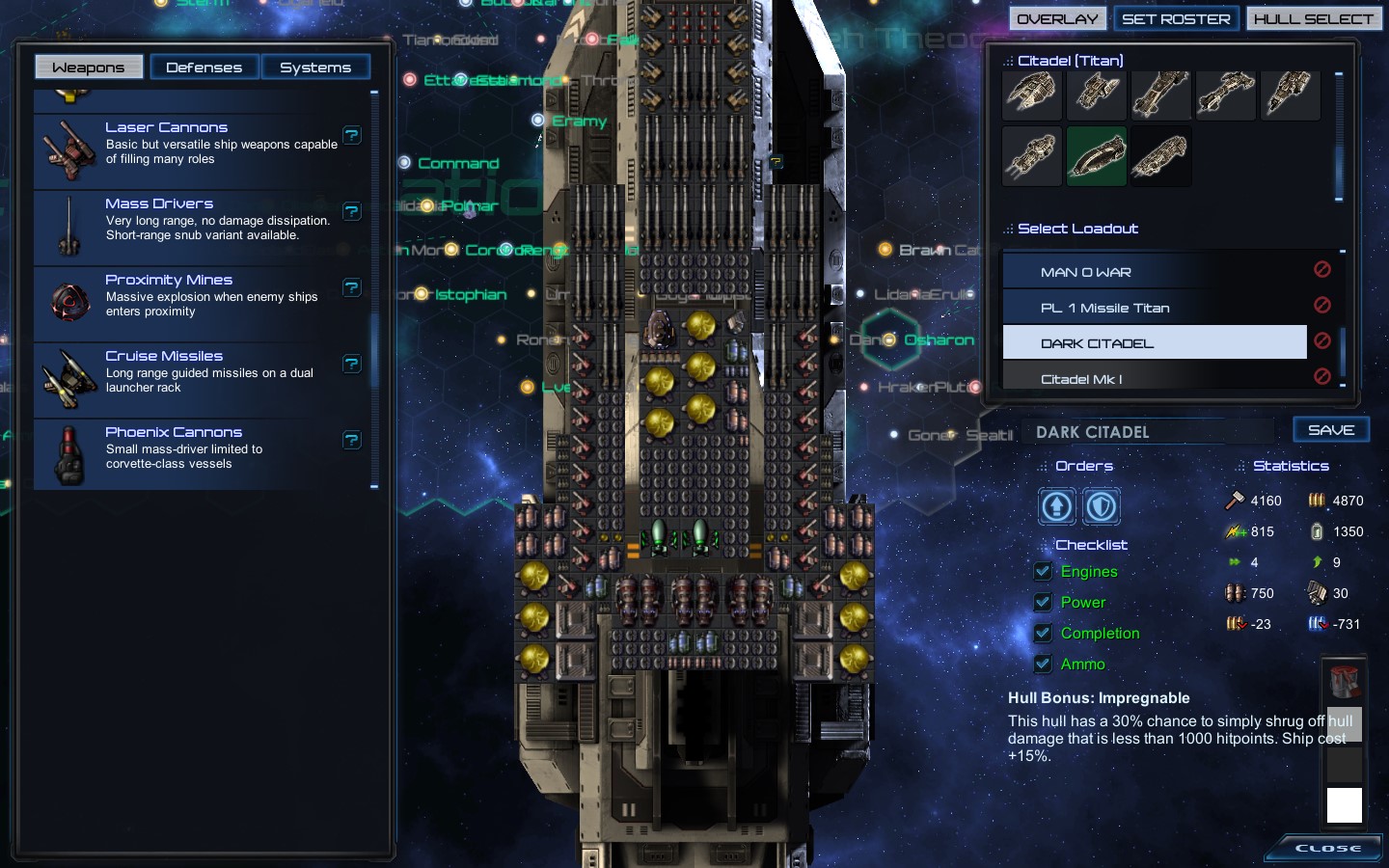 
Basically 5 purchases from Crazy Eddy’s, plus starting equipment and you have a ship that can wipe out most opposing fleets singlehandedly. You’d need maybe 4 of them to take on the largest Antaran fleets that they will throw at you and typically just 2 or 3 together to invade and completely wipe out an enemy faction.


Crew protocols 250 credits, Scented Engine Core 1500 credits, Silver Fluid 3200 credits are all nice to have, but they can wait.


GEAR HOUSING and METAL DEBRIS can both be ignored. Once you have shields, armour becomes irrelevant and the Phoenix Cannon supposedly doesn’t even fit on a Titan anyways. Much better weapon alternatives, even if they can go on a Titan.


When I refer to Titans, I’m pretty much just referring to using the CITADEL TITAN. It can shrug off up to 1000 damage, it’s got a lot of space, much more than any of the race Titans and it’s comparable in price (even though it should be 15% more expensive) to outfitting a regular Titan. Basically don’t waste your time, just use that one chassis and outfit it with the latest technology.


I suggest however giving any new iteration of ship a different name, even if it’s just Mark 1, Mark 2 etc. If you use an existing name then any refits with that name suddenly lose the small refit cost they had before and become full price. (one of the many unfortunate bugs in this otherwise amazing game)

This is all about StarDrive 2 – Best Strategy to Win; I hope you enjoy reading the Guide! If you feel like we should add more information or we forget/mistake, please let us know via commenting below, and thanks! See you soon!