*SPOILERS WITHIN*
Quick and simple guide going through all achievements in Othercide!
Most should be acquired just playing through the game and purrrhaps this will a*sist in getting the last few!

This can be easy to miss the first time as there are only a number of turns you are allowed before The Child shows up and forcibly moves you forward through a cut scene (regardless if you have killed all enemies or not).

AP management is key to this and you should try not to let Mother go into Burst mode if at all possible (meaning: do not spend more than 50 AP in a turn).

The following can be used as a guideline:

This will be acquired after completing the Tutorial and arriving at The first Era.

Will be acquired after completing the first Synapse.

Will be acquired when one of your Daughters is killed in battle.

This can be acquired after defeating the third boss (The Maid). Simply create a Scythedancer Daughter.

This will be acquired as soon as you start another Recollection.

This can be done by manually opting in from the Chrono Map or via defeat.

Choose to resurrect a Daughter from your Cemetery. You will need one Resurrection Token to revive one Daughter. These can be acquired through Rescue Synapses or via Remembrances when starting a new Recollection.

Self explanatory and you should get this simply by playing through the game.

You will likely acquire this through normal play but will show once you have lost 400 HP due to Reaction or Interruption skills.

While all cla*ses have Reaction and/or Interruption skills, it is extremely easy to get this using the Soulsinger’s Intercepting Round and Shadow Round to protect and back up her allies. Each use will take away 5-10% of her HP each turn.

Traits are earned either by Sacrificing another Daughter of equal or higher level or through fighting.

A Daughter can only have 1 sacrificed Trait at a time. Sacrificing another Daughter while she already has "A Part of [Name]" Trait will overwrite it with the most recent.

Continue using the same Daughter in as many fights as possible and she should have 5 Traits before you finish an entire playthrough.

Memories can be acquired by killing enemies in Synapses and their drop rate can be boosted through a Remembrance as well.

Once you have earned some memories, go to the Inner Void > Daughters Overview tab. Select a Daughter > select one of her skills > select the area under Equipped Memory > choose an applicable Memory from the list. You will need to have enough Vitae to equip it.

Note that some Memories can only be attached to certain types of skills.

Complete a Rescue Synapse and choose to Save the Bright Soul.

You will gain Vitae as reward.

The Ends Justify the Means

Complete a Rescue Synapse and choose to Sacrifice the Bright Soul.

You will gain a Resurrection Coin as reward.

You will acquire this naturally as you play through the game. It should unlock sometime within the Fifth Era.

Self explanatory. Simply choose to Sacrifice a Daughter.

Sacrificing a Daughter of equal or higher level to her sister will recover HP and also grant a trait.

Self explanatory. Sacrifice a Daughter who has at least one Memory attached to a skill.

You should get this naturally playing through the game.

Vitae can be spent in germinating new Daughters as well as attaching Memories to skills.

You will get this naturally just playing through the game. Close 20 Synapses.

This can be done across multiple Eras and Recollections.

Have a level 15 Daughter.

You will likely get near the end of the game and only be between level 10-13. Remembrances can be activated that give a 25% and 50% experience boost which can speed up the last levels quite a bit. You will also gain the ability to birth new Daughters at higher levels after each boss with Remembrances.

Defeat the first boss: The Surgeon.

This fight allows you to have 3 Daughters and you’ll likely want at least one of them to be a Shieldbearer. The other two can be any combination.

The main thing for this fight is to kill off any and all adds on the field as they will buff the boss. Have the Shieldbearer snag The Surgeon and let the other two Daughters take care of the adds. Once all adds are destroyed it will move to the next phase and all Daughters can focus on The Surgeon.

Defeat the second boss: The Deacon.

This fight allows you to have 4 Daughters.

The main thing to keep in mind is that the 3 Daughters closest to The Deacon will become rooted, so keep the Daughter you want to have the most mobility with the farthest away.

Defeat the third boss: The Maid.

This fight allows you to have 4 Daughters. Using 4 Soulsingers can work out quite well due to this boss’s mechanics but feel free to use your own preference of cla*ses.

The main thing about this fight is that the boss is all about Interruptions and Reactions. Directly attacking her can cause her to deal damage, moving can cause her to heal, and various other effects. Learn how she operates and you’ll achieve victory easily.

Defeat the fourth boss: The Child.

This fight allows you to have 4 Daughters.

The main thing for this fight is to be light-footed and ready to move. The boss will create numerous patterns of AOEs and will often teleport around the area.

This fight allows you to have 5 Daughters. There are various cla*s combinations you can use for this fight so find whichever works best for you. (My personal go-to was 2x Shieldbearers, 2x Soulsingers, 1x Scythedancer).

The first part of this fight against the Nucleus is pretty easy. Kill the enemies on the field and as they spawn and tear the boss down. The boss will teleport around a bit if given the opportunity and when it gets near death it will start a "Hatching" attack. You can kill it before it hatches or if you do not deal enough damage, the boss will explode and damage any nearby Daughters. Regardless of the method of its demise, a cut scene will play bringing you up against Suffering.

Suffering can become a long fight if not prepared for correctly so make sure you have skills and memories set up to deal with it (in particular, any self/ally buffing skills with a 100% initiative delay resistance will a*sist immensely). You should aim to do as much damage as possible before the boss gets a turn. Suffering will use a large number of attacks every time it gets a turn that include delaying your Daughter’s turns, swapping places with the furthest Daughter away and deal damage and aoe damage, a cross beam attack on each Daughter (make sure no Daughters share columns or rows or they may not survive), instant kill attacks, and more.

It can be a very annoying fight but you’ll get it!

This achievement can only be obtained after defeating Suffering and completing the game. This is when gain your last Remembrance.

You will want to have completed enough Synapses to earn around 2200 shards.

Once you begin a new Recollection, Activate every single Remembrance and you will earn the achievement.

For this achievement you will need to defeat every boss in a single Recollection. It can be any Recollection number so by all means, use your max level Daughters to run through it in no time at all.

Do keep in mind if you lose all of your Daughters or die to a boss it will start a new Recollection and you will need to start over. This is also a good time to remember the force quit strategy in case things start to look bad. When you relaunch the game, you will start directly in the fight so make sure your chosen Daughters have cla*ses/skills/memories all set up prior.

You will want to play through Synapses to obtain Memories for use later on, but this can be done extremely quickly with a couple level 15 Daughters. Using a Scythedancer’s The Harvesting paired with a SoulSinger’s damage boost will annihilate anything on the map in one hit.

This can also be used to acquire more shards easily if you still need the ‘More Than Ready’ achievement.

Thank you for checking out this guide!

I absolutely adore this game and hope it can help out those still experiencing it!

This is still a bit of a work in progress but feel free to let me know if anything should be adjusted or added to make it better!

"…and we will send our Daughters." 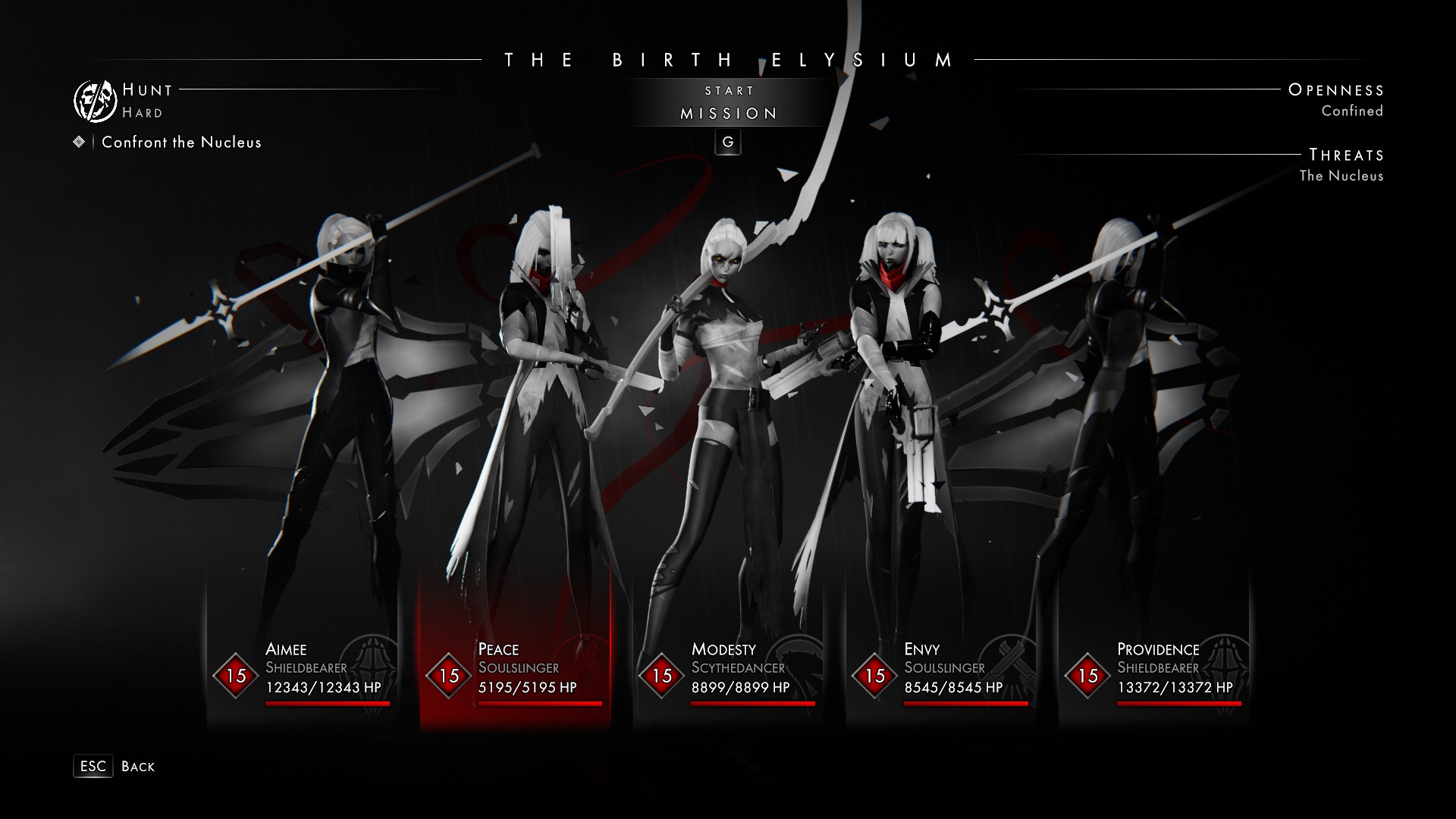 Hope you enjoy the Guide about Othercide – 100% Achievements, if you think we should add extra information or forget something, please let us know via comment below, and we will do our best to fix or update as soon as possible!