Tips/Tricks to overcome the odds and ensure Japanese dominance in Humankind OpenDev scenario.
Fog of War and Vision are key elements to victory.

Once commencing the battle, both sides become shrouded in Fog of War and cannot see each others units being deployed.

Units within forest tiles (rocky texture) are not seen by the AI until 1. an enemy unit is adjacent or 2. they engaged from that spot.

Our ranged and (most) melee units should take advantage of these spaces to ensure the AI does what we want.

The AI wants to engage but can only do so on exposed units. Our exposed melee unit is bait to force the AI’s ranged units forward to counter engage.

Since the AI uses its longest range first, it’ll position them forward to attack “bait” before melee units can fill-in the front line (trapping ranged units behind them).

Notice the two exposed ranged and cannon on either side of the battle field.

Damage/Destroy AI Ranged Units with our own from tiles A, B, C, and D. Tile A is special as it is exposed and takes more damage. Only use it to pick-off their exposed ranged units.

Tile E is for picking off melee units.

Only attack the cannon from the most distant river tile. Don’t be greedy and engage with another melee unit too early… bide your time till the cannon is almost destroyed.

The mortar fire from the cannons is annoying, but we’ll silence them for good soon enough.

The AI only needs to be baited once, our melee unit can lineup to crossover the river.

Keep pummeling the ranged unit with your ranged (A, B, & C) and the cannon with your solo melee. Again, don’t be greedy by crossing with another melee too early.

Ranged B’s hit should finish the weak AI ranged unit. Ranged on A can slide over to D to start pummeling melee units with E.

The AI’s rear ranged unit is not worth moving our ranged up for.

Leading up, we’ll destroy the cannon with another melee and immediately make an attempt on the high ground.

Our bait melee moving with the rest to secure a footing on the opposing bank.

If the AI’s ranged unit slides up, pick-it off with A, B, & C, otherwise don’t slide a ranged unit into A and continue to pick-off melee units.

It’s almost time to secure a footing on the opposite shore. Continue working on the cannon till a single hit can take it out.

The cannon bombardment is really quite annoying.

The Plan after AI engage:

Melee:
Now is the time to finally swing the battle in our favor.

1. Silence the cannon with another melee unit.
2. Our already waterlogged melees will make an attempt on the upper more defensible location.
3. Start crossing with more melee units, but keep one over looking the river to provide cover.

In a straight-up melee, Japanese melee outclass the AI allowing us to swing the battle in our favor… starting now.

The Plan after AI engage:

With a foot hold on the hill, our melee just wants to defend and wait for reinforcements to drag themselves out of the river. The AI is still eager for a fight and will come to us.

Ranged:
With the battlefield shifting, finish off melee while letting the low HP units take shelter in the back. 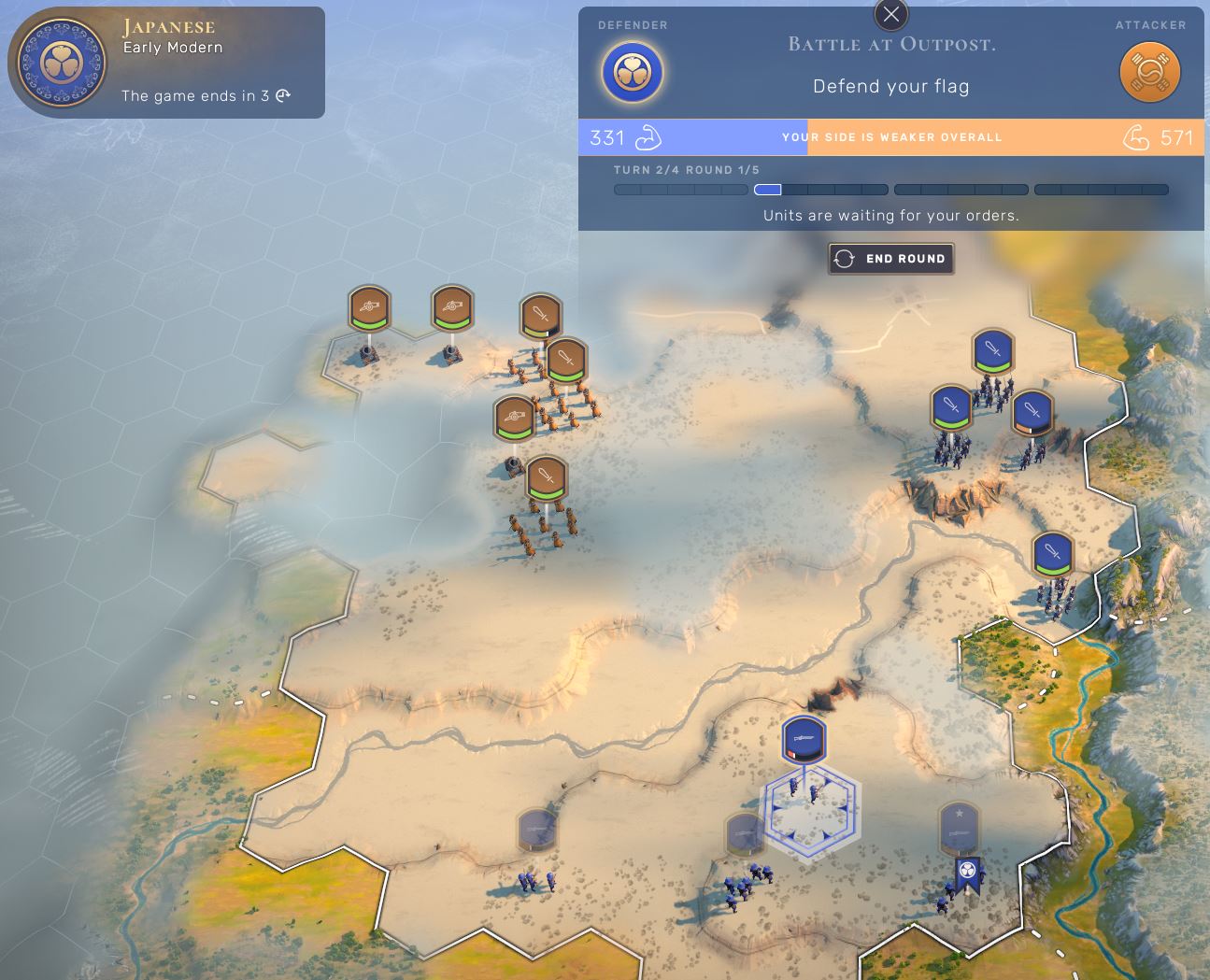 Some of our units will start to get veteran status (Stars) on their icons. These units will have greater combat potential.

The Plan After Ai engage:

Try to cycle units forward to allow them all to participate. This lets us checkout whats in the Fog as well.

Ranged keeps wounding the exposed AI melee while ours push-in.

Don’t be misled, the AI still has scores of melee units.

May have pushed my luck a bit too far, pulled back for high ground advantage. Letting the injured unit have some space.

Ranged still hanging in there…

Gradually closing in on the cannons

It was a roller coaster, but with a satisfying end.

I hope you enjoy the Guide we share about HUMANKIND™ – Lucy OpenDev – Wading into Battle Scenario: Perfect Victory; if you think we forget to add or we should add more information, please let us know via commenting below! See you soon!