Hello! I create custom levels for Hotline Miami 2 and recently my save data was wiped. Luckily, i figured out how to edit the savedata.vfs file using Notepad++, and that’s what this guide is for.

Hello! I’m Nema, and i am a person who makes Hotline Miami 2 levels! This guide will not focus on that however, and today we will be looking at how to recover savedata.vfs files after you’ve just re-installed the game, or you want to get your save data back after you’ve accidentally deleted it.
This guide uses a program called Notepad++, which you can install notepad-plus-plus.org – https://notepad-plus-plus.org/downloads/
Since the only save file people have used for the game to get all A+ grades on Normal has been deleted, this guide doesn’t use that file. This guide shows you how to edit your own file yourself if you have lost data and cannot recover it.
You will also need Steam Achievement Manager if you accidentally give yourself achievements and want to remove them.
You can get that as well github.com – https://github.com/gibbed/SteamAchievementManager

I am not responsible for loss of save data or damages. You must make backups yourself.
Even if steam cloud saving is an option, It is unusable with this game, for some reason.
This guide also shows how to edit achievements. If you accidentally activate an achievement and want it off of your profile, use Steam Achievement Manager (or SAM) to remove them.
This guide takes into account that you have already cleared the game and have scores on leaderboards that aren’t cheated.

Okay, so let’s take into account that you’ve just re-installed Hotline Miami 2, and your data is gone. Don’t fret, let me show you where the savedata.vfs file is..

Levels Cleared (or unlocked, whatever…)

Okay, now let’s get into the good stuff, values and all that!
Firstly, let’s cover unlocking levels. 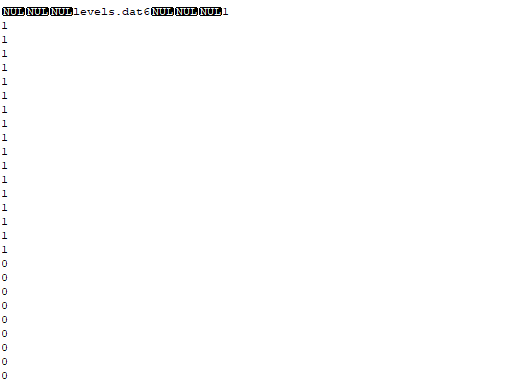 This is an example of all of the levels unlocked up to the first level in act 5. The last two levels should be The Abyss and Apocalypse.
From what i know, you can’t unlock levels out of order. (At least i think. I might try it on another downloaded version of HM2, but for now i don’t think you can without it crashing the game.)
Here’s the meanings of these ones and zeroes.
1 = Unlocked Level (or Act) Normally, these are unlocked after you beat a level preceding another. Example is that you play the last level in Act 1, you clear it, it unlocks the first level in Act 2 and so on.
0 = Unlocked Level (or Act) Also normally, these are unlocked after you beat a level (or act) before another.
Scores are seperate, and not the same for these. Entering, for example 200,000 on a level’s unlock scheme may crash the game (i haven’t tested it yet) so just don’t do that.
Acts aren’t seperate from levels either. When you toggle the first level in an act, it automatically unlocks it.
I don’t think you can unlock acts seperately either. You may not be able to do things such as unlocking act 1 and unlocking act 5 without doing the other acts, etc..
This also works for hard mode too, it’s just a seperate value. The hardlevels.dat6 value is for hard mode levels. It works the exact same way.

Okay, time for the interesting stuff, Grades and Scores! 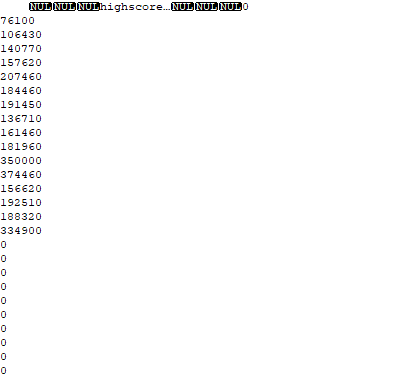 The zeroes are default values for scores. They cannot be edited whatsoever without crashing the game, and they are unique default values,like certain time values. Speaking of time values, here’s an example of the default variables used by the game’s coding for time. 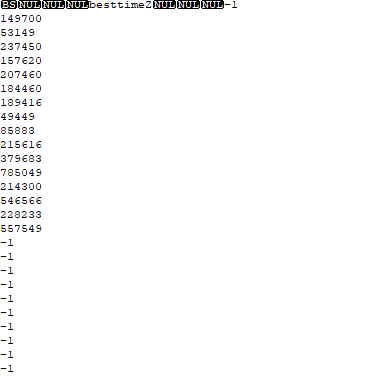 I do not know what the -1 values do, but they will always crash the game if you change them. At least it did for me. Changing it to any kind of value may crash the game for you, so you probably shouldn’t change it.

Grades correspond with scores as well, so there’s no way to get an F grade if you get 250,000 points on a normal level. I don’t know if they correspond with leaderboards, but they might. That may be how people cheated their scores iirc but for now i do not know until i start testing it out myself.
To edit scores, it’s required that you have a placeholder score first. Clear a stage before editing your score to have it work. There is no other way to do this without some type of placeholder score. Scores of any grade will work no matter what, but make sure not to add too much of a score.

Okay, this one is sort of a doozy. Achievements are unique in the sense that it corresponds with the game’s achievements screen (located in the settings). Each number corresponds to an achievement. Here is each achievement corresponding by the number shown before the value. It should be in a little gray box. Like this:

That’s basically every Achievement ID. Be wary that if you activate these achievements, you’ll have to use SAM (steam achievement manager) to remove them.

Okay, so here’s another doozy of a coding situation… Sort of. Character abilities just toggle with 0 and 1, however they have unique lines of code specifically for their unlocks.
An example is Beard, who has about 5 lines of code for each of his weapons.
This is his line of code, above son.dat.

Each weapon is set to 1 because of the game’s unlocks.
You can set them to 0 however you like, however i don’t think locking the default weapons does anything. Each character has their own alternatives of a .dat name, such as fans.dat or son.dat respectively. When there’s a 0 below the name, you can change it to a 1 to unlock it. Jake has a weird code structure, however he works the same way any other character would with techniques.

Yeah, that’s really about it for the guide. I’ll make better guides than this soon, this is really only my first one that i’ve actually done.
Hopefully this proves useful to someone, or maybe even anyone else.
And also hopefully this appears on google when you search up how to recover hotline miami 2 save files. This proved useful to me, so i actually thought it would be a nice idea to teach people how to edit the values they want for their save file.

Again, i’m not responsible for any problems this causes for your hotline miami 2 saves.BE SURE TO MAKE AS MANY BACKUP SAVE DATA FILES AS POSSIBLE AS SOON AS YOU EDIT FILES AND TEST THAT IT WORKS!

anyway yeah, hopefully you liked this crappy guide lol, i don’t know all the id’s for sprites or whatever but yoss’ level editor tutorials were absolutely amazing and incredibly useful while making some of my own levels.

Hope you enjoy the Guide about Hotline Miami 2: Wrong Number – Hotline Miami 2: savedata.vfs editing and how to recover saves!, if you think we should add extra information or forget something, please let us know via comment below, and we will do our best to fix or update as soon as possible!