The Match Modifiers are the first thing you’ll see once you hop into the game, and can feel a bit overwhelming at first. This guide will help you understand each parameter so you can fine-tune your gameplay experience.

Once you boot up Escape from Mandrillia, you’ll appear on Observation Chamber 4 at SPHYNX underground facilities, also known as the “Main Menu”.

As the VR player, you’re the boss on this scene. PC players can spawn as Mandrillians inside the observation cage to scream at you and pound the cage’s glass, but they won’t be able to hurt you. Yet.


From this point, you can start a match straight away by pressing the big ol’ red button in front of the Robot rig. You’ll be subjected to a short cutscene that you can skip by flipping the “NO INTRO” switch.


(If you instead flip the “TRAINING” switch, you will be sent to the Virtual Training hub) 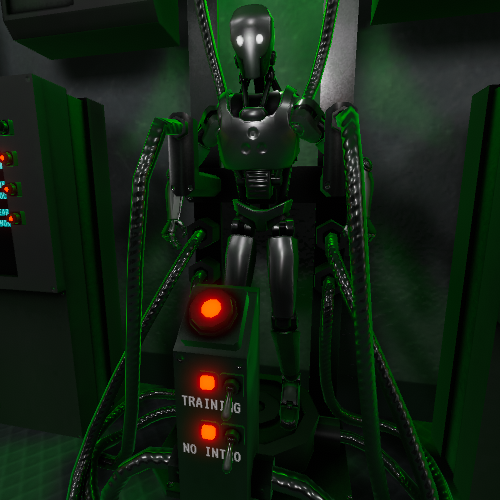 That’s all fine and dandy if you wanna have a quick match with default settings, but what about all these buttons scattered around?


Most of those are one of the game’s main features: the Match Modifiers. Be it you want to adapt the gameplay to balance for less experienced players, or just to mess around and try different play styles, the Match Modifiers will give you complete control over dozens of parameters. With this guide you’ll learn what each of them does.

Don’t feel like reading all of this crap? Match Presets are packs of settings that offer a specific, pre-tested experience. Each preset has a short description; use the arrow buttons to move between presets and press the “apply selected preset” button to automatically change all the relevant match settings. 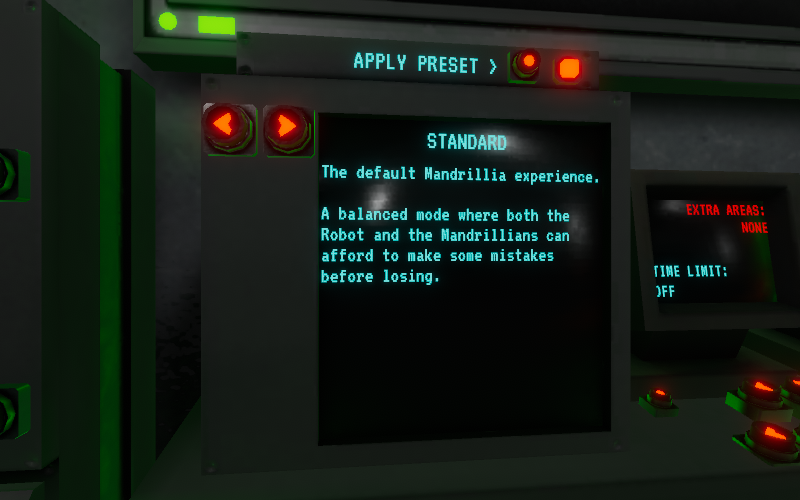 Now let’s get into the modifiers that actually change the gameplay. 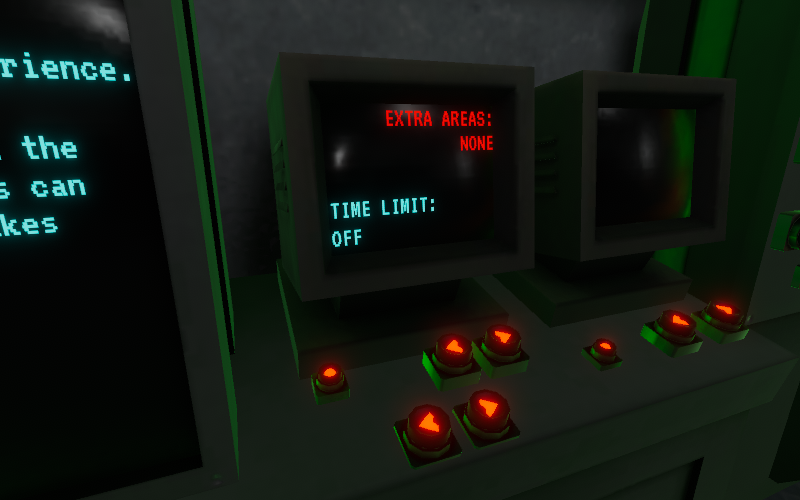 EXTRA AREAS: [WORK IN PROGRESS] This switch enables and disables the three extra areas of the map: Warehouse, Research and Development, and Waste Disposal.


TIME LIMIT: Lets you set a time limit to the match. As a VR player, you can check the remaining time on the back of your left hand, next to your health indicator. Once the timer gets to zero, everything explodes and Mandrillians win.

The Robot (VR player) has the biggest amount of settings to tweak, so they’re separated in three sections.


The General section is all about health, speed, and miscellaneous stuff. 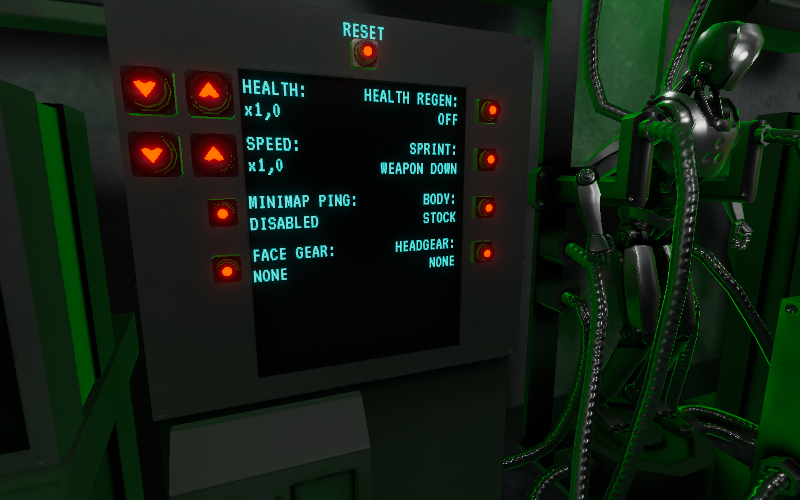 HEALTH: a multiplier to your base HP.


HEALTH REGEN: by default, the Robot won’t regenerate health by itself. With this setting you can cycle between OFF, SLOW, FAST and ON KILL (where killing Mandrillians will give you a slight HP refill).


SPEED: the base speed multiplier for the Robot.


SPRINT: by default (WEAPON DOWN), to achieve max speed, you’ll have to lower your weapon (if you’re carrying one). If you change it to ALWAYS, you will bypass that requirement.


MINIMAP PING: activates a small blip on the Mandrillians’ minimap that will always show your location (unless cloaked). Makes the game extremely hard for the Robot, so use it for matches where the VR player is overpowered or to help new Mandrillian players get used to the map.


BODY: cycles betwen the Robot’s hulls. Those are not just cosmetic, and have actual gameplay consequences: STEALTH makes it easier to hide in the shadows, and automatically cloaks items in your inventory. WARRIOR gives you a red glow, superior punching strength and the ability to block Mandrillian attacks with your arms (but the blocking will start wearing down if hit too many times). BLAST gives you massive damage reduction against explosives.


FACE GEAR and HEAD GEAR: purely cosmetic items (you can change them freely without effect on any selected Preset).

This section changes the way your Multitool works (if you haven’t disabled it via enabling Akimbo Mode). 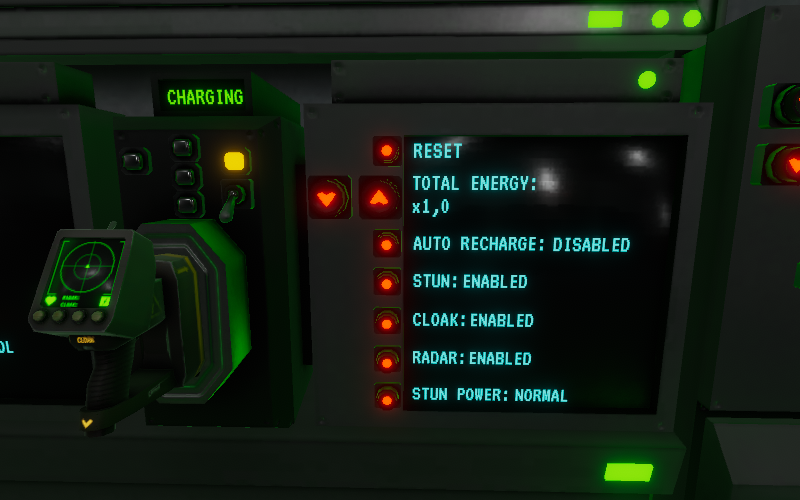 TOTAL ENERGY: set up the multiplier for your Multitool’s charge (note: for balancing purposes this will not affect the number of stun charges; those will always use up 25% of the total charge).


AUTO RECHARGE: by default the multitool will not charge by itself, needing either portable batteries or wall charging stations. This setting lets you enable auto-recharge, as well as the speed of it.


RADAR: enables or disables the Multitool’s radar feature (activated by flipping the switch on the top of the Multitool).


STUN POWER: the amount of time a stun charge will paralyze a Mandrillian; NORMAL for ~10 seconds, LOW for ~4 seconds.

This section manages the weapons you start with, the way ammunition works, and the kind of stuff you’ll find around the map. 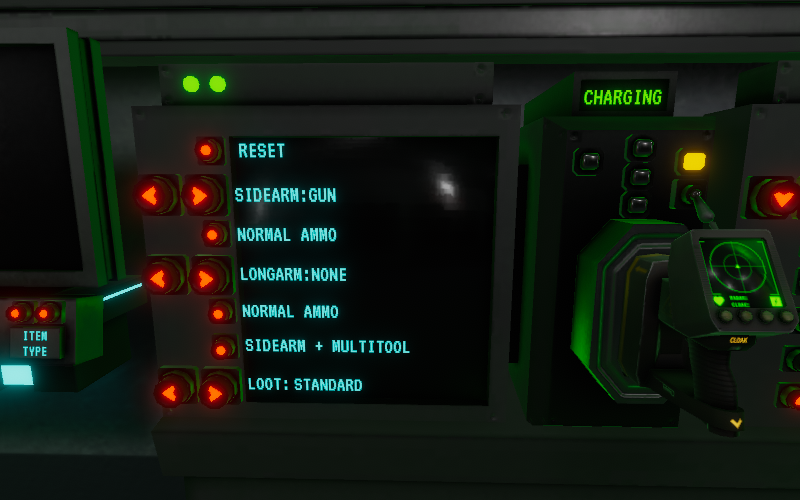 SIDEARM and LONGARM: by default, at the beginning of each match, you’ll have a gun available to you on the floor. With those settings you can select the weapon you want to start with, as well as adding a longarm to the mix. You can also set them as random, or outright disable them. Note: the random pool does not include the flashlight nor the chainsaw.


SIDEARM/LONGARM AMMO: turns your middle inventory slot into an infinite supply of your last held sidearm/longarm (or both).


SIDEARM+MULTITOOL/AKIMBO MODE: by default, you’ll have one sidearm that will go on one of your belt holsters, with the Multitool going to the other. “Akimbo mode” makes you start with two of your selected sidearms, and removes the Multitool from the match.


LOOT STYLE: changes the spawn pool and chances for all the loot present in the map, and inside the ammo crates. Some of them, like “Survivor” and “Soldier”, also include a sort of “themed” progression with increasingly good weapons found on the weapon crates you find after each magenta-keycard locked gate.

These are for the PC part. 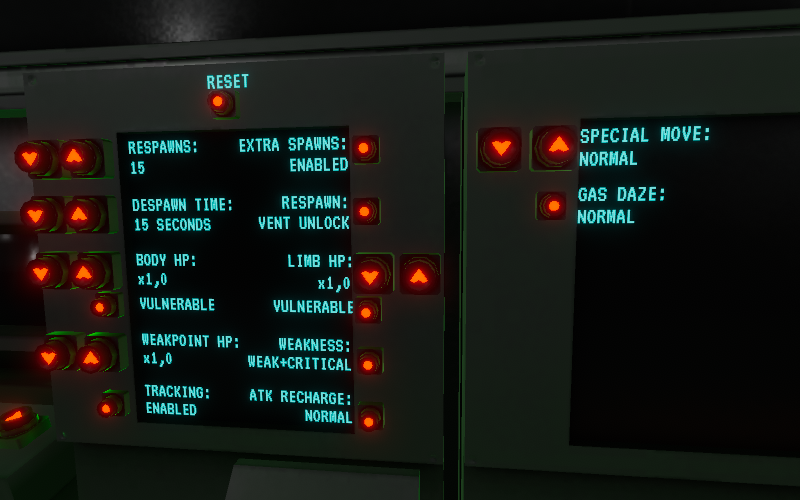 RESPAWNS: The (minimum) number of Mandrillians the VR player will need to kill before winning. A Mandrillian is considered “dead” only after its body is destroyed (either by gibbing or by despawning). If there are two Mandrillian players and the counter goes to 0, when one of them dies their screen will go back from splitscreen to normal splitscreen, unless the surviving Mandrillian finds an extra spawn powerup in the vents.


EXTRA SPAWNS: Enabled by default. When disabled, Mandrillians will not find extra spawn powerups in the vents, being limited to just health powerups.


DESPAWN TIME: The time a Mandrillian corpse will take to despawn after being killed in a “normal” way. If a Mandrillian is gibbed (either at or after death), the despawn time will be shorter.


RESPAWN: VENT UNLOCK is the default mode: Mandrillians must unlock spawn points by smashing the vent ceiling grates. DYNAMIC will have all vents unlocked from start, and after the first death you can move around the map and choose the exact point you will reappear, coming from the ground.


Mandrillian hitboxes are separate between the main body, the limbs, and a small “brain” hitbox between the eyes.


Mandrillian have separate HP values for the body, brain, and each limb. Their current value is represented on the small mandrillian graphic on your screen.


If either the body or brain HP values reach 0, the monkey dies.


The brain weakpoint counts as a critical area, but it also has its own HP. It’s a very low value, so basically any hit to the brain will kill a Mandrillian.


If a Mandrillian gets damaged in a very short timeframe by a value of twice their base body HP+1, they will instantly gib. This is usually achieved via explosives or shotgun blasts to the face.


BODY HP: Multiplier of the main body HP value for the Mandrillians, with 100 as base value. You can switch it from VULNERABLE (default behavior), GIB ONLY (will only take damage if dealt burst damage high enough to cause gibbing), or INVINCIBLE (completely impervious to any damage)


LIMB HP: Multiplier for the arms and legs’ HP values for the Mandrillians, with 100 as a base value. You can switch it from VULNERABLE (default behavior), GIB ONLY (will only take damage if dealt burst damage high enough to cause gibbing), or INVINCIBLE (completely impervious to any damage)


WEAKPOINT HP: Multiplier for the “brain hitbox” of the Mandrillians. Increasing it will make it so one shot right between the eyes won’t be enough to off a Mandrillian.

TRACKING: Enables or disables the ability of the Mandrillians to use their Tracking ability, useful to find the VR player’s location in dark areas or while cloaked.


ATK RECHARGE: The speed at which the Mandrillian’s stamina points (the six circles at the botton of the screen) recharge. If you disable it, once you deplete your stamina points you will need to go back to the vents to recover via health powerups.


SPECIAL MOVE: By default, Mandrillians slowly charge a “special move” they can activate once it’s full. It charges overtime, but the process can be sped up by damaging the Robot and picking up vent powerups. This Setting changes the speed for the special move to charge, or disables it outright.


GAS DAZE: When Mandrillians get a sniff of the green poison gas, they will get stunned for awhile, their movement speed reduced and unable to attack or jump. You can control the duration of this effect with this setting.

The item spawner contains almost all the items present in the game. You can enable it on the main menu if you want to just mess around in a match. There is no limit for the amount of items you can spawn, so use with responsibility. 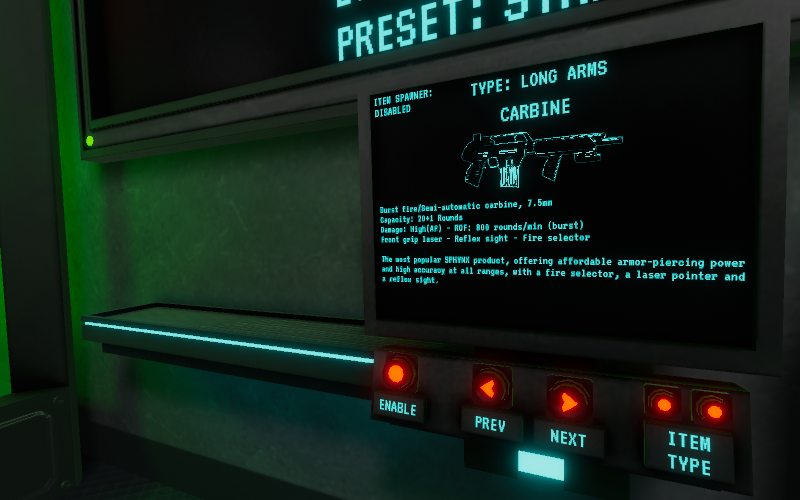 After checking the Match Modifiers, let’s have a quick look at the persistent player preferences. Those are meant to be basic settings to tailor the VR experience to your tastes. They will be saved between sessions.


The settings next to the Robot can always be changed, even after a match starts.They are the usual settings you’d find in any VR game: height calibration, toggles between head-based and controller-based movement, etc. 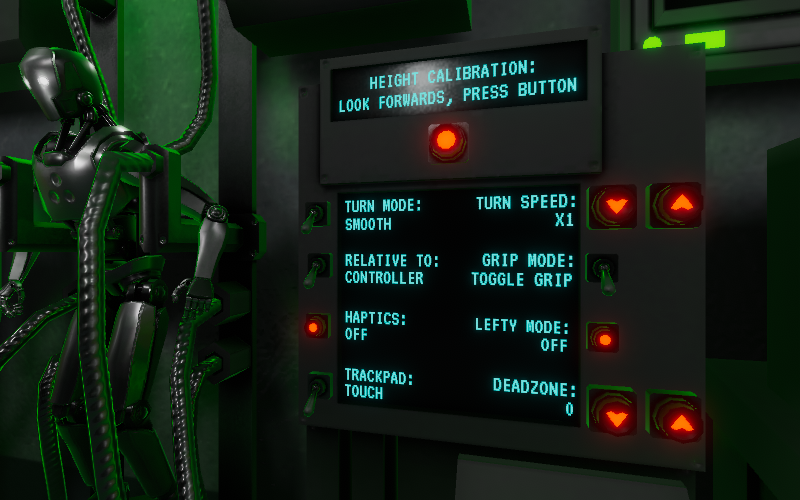 
The settings on the right are mostly graphical settings and accessibility preferences. 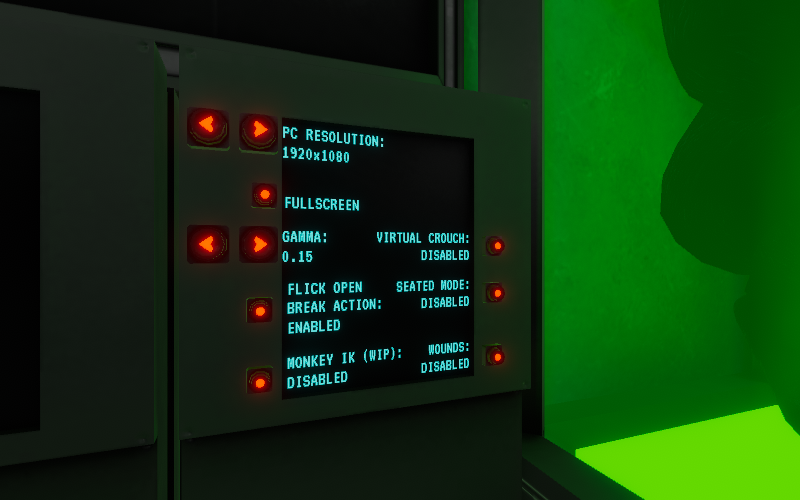 PC RESOLUTION: Self explanatory. Changes the resolution for the PC players (does not change the VR resolution). Can be useful if you want to squeeze a bit of performance or improve Remote Local Play input lag; Escape from Mandrillia’s UI is designed to be playable at very low resolutions.


GAMMA: Escape from Mandrillia is a dark game, and many gamemodes rely on that. If you feel it looks too dark for your screen, tweak this setting (default 0.15).


FLICK OPEN BREAK ACTION: Break action weapons, by default, can be opened in three ways: clicking on the barrel with your off hand, pressing the lower button on your VR controller (unless you use an inferior controller like the Vive Wands), and just flicking it open. If you fear accidental flicks, disable this setting; you’ll have to either press the button or click on the barrel to open the weapon (you’ll still be able to flick them closed)


SEATED MODE: This setting gives you a 40cm boost to your height and re-calibrates the in-game avatar accordingly.


VIRTUAL CROUCH: A setting to “virtually” crouch to ~75% of your calibrated height by pressing back on your camera controls (goes well with SEATED MODE).


MONKEY IK: Disables or enables the Mandrillians’ IK system (their legs adapting to uneven ground). Recommended to leave it on unless you have a very slow processor.


WOUNDS: Enables or disables the Zulubo’s SkinGore™ System. It’s just a visual setting that shows dynamic wounds on Mandrillians’ bodies. Disable it to improve performance or if you find it too gruesome.

I hope you enjoy the Guide we share about Escape From Mandrillia – Match Modifiers and Main Menu Scene; if you think we forget to add or we should add more information, please let us know via commenting below! See you soon!