i did some met… – ehhh math for you guys, so you don’t have to, to plan your production lines and power plants,
i’ll try to keep this updated, i hope i can help 🙂

This guide is mostly for beginners or people who are too lazy to do the math stuff in this game, if you like this guide or have some ideas of adding content or corrections to do, pls leave a comment.

i’ll try to keep this guide up to date.

i appreciate any support,

PS: there is a Calculator for this game where you can calculate and plan out your production lines:

!beware, it’s still in beta and not yet finished!

(Short)terms i use in this Guide

#3 build a Main Busline around the equator of your planet, so you dont have to worry about gridchanges and you get your ressources from anywhere to everywhere (you can see the equator marked as thick green line in the building grid – dont mistake it with the North/South Axis, just double check on planet view)

#3,5 build your production lines always East<–>West and only the supply line from your mainbus North<–>South

#6 maybe seems obvious but keep in mind that the magnets (that you need a sh*tload of in early to midgame) are directly produced from iron ore and NOT from already smelted ingots, it did cost me a lot of time forgetting this…

#7 always put a Storage after each assembly line so the belt runs "through" a storage container, so in case something stops the further production you keep producing and have some items left over for hand crafting, its always useful

#8 put one Mining machine only to the purpose to mine coal and put it in a storage so you always have enough fuel for your mecha, Coal is AFAIK the most efficient fuel for the mecha, not because the regen rate is great, but it stacks up to 100 units in your inventory, so it beats every other fuel for now

#10 you can place one producing building, set the recipe, then copy the building so you got the recipe already set and done instead of setting it manually or doing copy paste of the recipe

#11 you can build short belt bridges with splitters or elevate belts quickly without wasting much space: 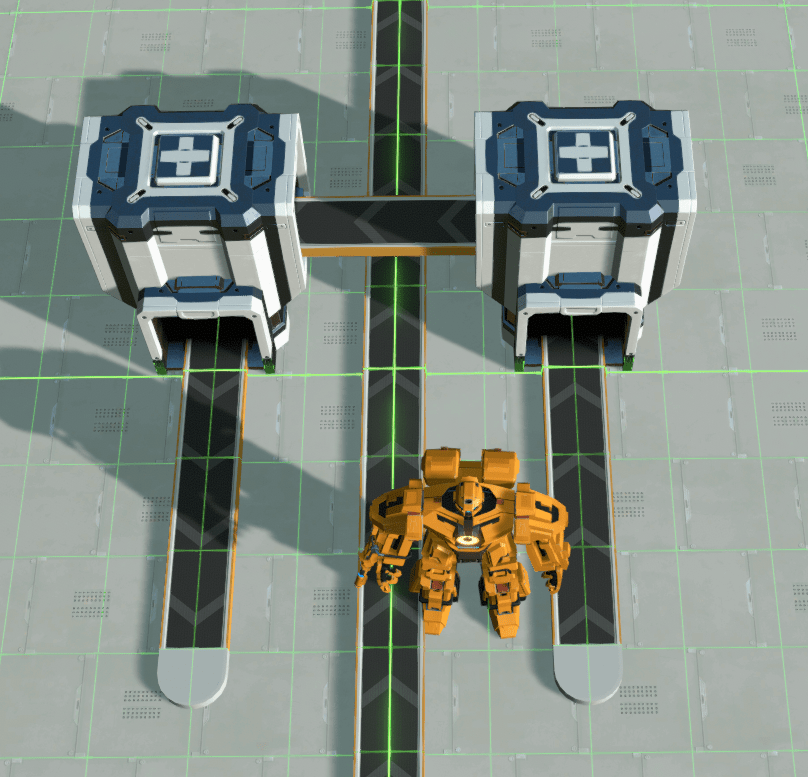 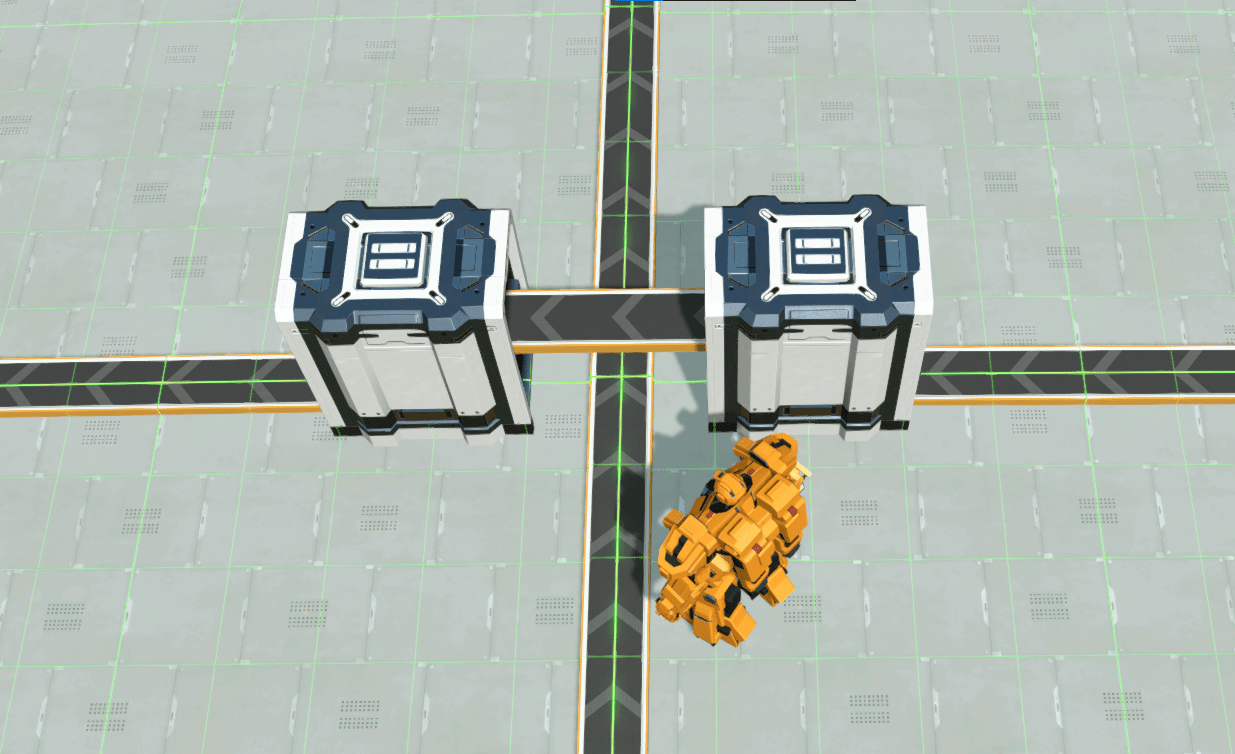 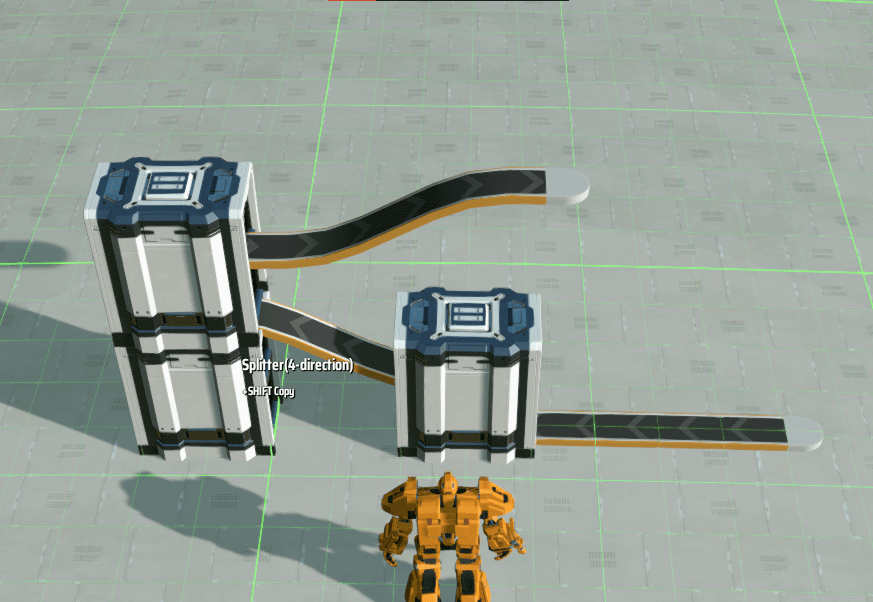 #13 you can make your belt junctions look a bit more neat by adding one more belt part to the back of it like this:
before: 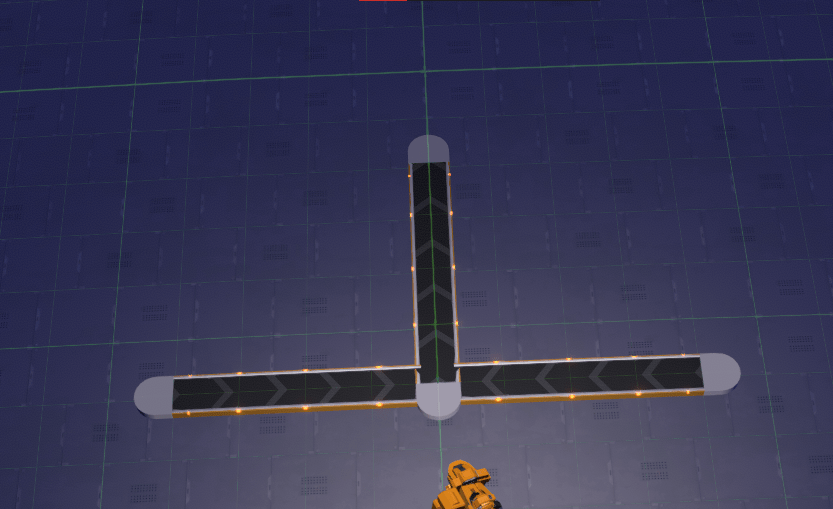 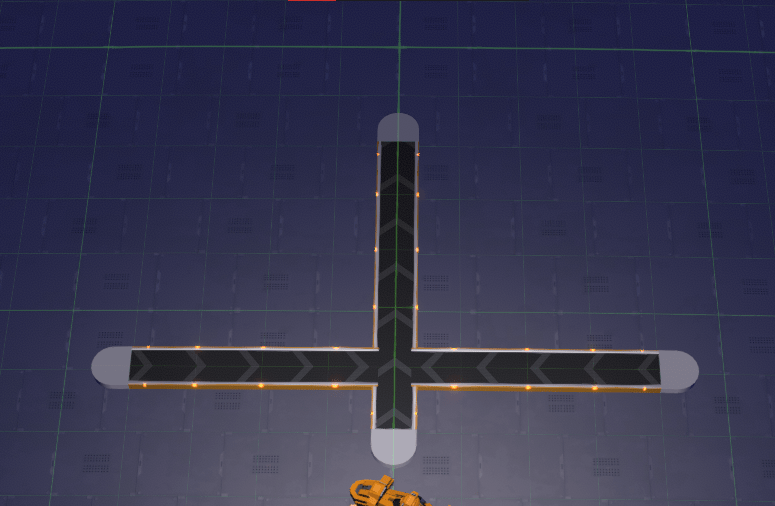 #14 CTRL+Left click on an empty inventory slot, sorts your inventory

#15 use wind turbines as powerlines over big distances so you produce even more power only by transporting it!

– Every stuff/TPS is always measured for exactly per 1 Thermal Power Station @100% Power and Coal powered though it is recommended to turn the coal into graphite before burning, it doesn’t change the outcome of power production BUT you can put some graphite on the side because its the better mech fuel.
Why doesn’t it change the outcome? it burns longer than 2 coals! – yes i know, but the surplus you get from it will be consumed by the machines making it in the first place, so in the end it stays the same.

– 1 Thermal Powerstation uses 1 coal/second (or 60/m) @100% usage and scales down by approximately .25 seconds for every 25% less usage, so keep that in mind if you are using not all the power to NOT connect anymore power stations per belt

– General speaking, the "Fuel Chamber Gen." stat multiplies the burn time, the kJ or mJ stat of the fuel, either negative or positive BUT this only affects the Fuel Chamber in your mech, NOT TPS.

here a list of all fuel types with their burn times in TPS in order from the shortest to the longest:

Edit: For the sake of a complete guide i added all the Machines, even though you will never use some of these machines without advanced power production.

here i did a little experiment, so if you put 1 line of solar panels around the equator of the planet, it will produce ~83mW at all times so a second row would produce another 83mW, of course this only works exactly with this planet i have but you can take it as a rough guidline when doing the same.

Here are the stats of planet so you get a picture of it: 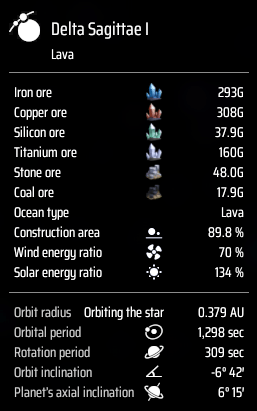 especially note the Solar energy ratio and the axial inclination, because this affects the power production of the solar panels

As you probably know, the Mk.I Belt can transport 6 items/s or 360/m, i assume all belts are on max capacaty, thats the basic number im working with here, maybe i’ll do an update on the guide with Mk.II or III Belts.

The other thing is, the Mk.I Assembling Machines only have x0.75 Production Speed, but i still recommend to build the assembly lines like you have x1 Speed, because you get pretty soon Assembling Machines Mk.II so you can easily upgrade it without having to delete many machines and waste space and ressources in the first place and you dont get confused by having to calculate those recipes because all recipes are based on x1 Speed.

Sorters are a bit special, you can connect sorters up to 3 Squares wide, but keep in mind that you have to half their speed per square they travel, f.e. a Mk.I Sorter is 1.5 Trips/Square/s and a Mk.II is 3T/S/s if you now connect the Mk.I with a 1 square distance and the Mk.II with a 2 square distance they will work equally fast.

(for the people who wanna do some math themselves)

Keeping it simple here, just double the numbers of the Mk.I section because the Mk.II Belts are twice as fast as the Mk.I

A: because you need a sh*tload of it for later production processes as well as for red matrix
production

Q: which map seed do you play on?

for solving some math problems 😛

Hope you enjoy the Guide about Dyson Sphere Program – Basic and Advanced Power / Production Math Stuff, if you think we should add extra information or forget something, please let us know via comment below, and we will do our best to fix or update as soon as possible!