This is a Guide for the full Dark Deception game, downloadable as of now!

Dark Deception is a game that will send you running around seemingly endless hallways with murderous creatures on your tail. The objective of the game is pretty simple, and that is to collect all the glowing shards without ever getting caught. Mixing horror and arcade in its gameplay, Dark Deception is very much like a nightmarish version of Pac-Man. 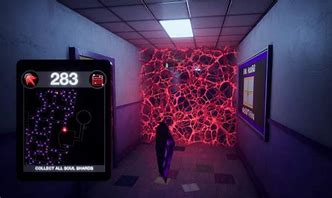 When first opening Dark Deception, you will be presented with the main menu, if this is your first time playing, then you will want to click the “New game” button.

This may not be a good option for players looking to re-experience the Levels. If you don’t want all your extras, progress, and ranks erased… choose replay! This will allow you to experience the full level, although will not wipe progress.

Click the other buttons, to see their functions, such as the “Extras button”
Extras will allow you to see promotional art, and fanart! It also allows the player to listen to the games’ level soundtracks. 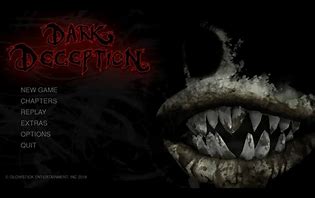 A player can press the resume button to continue at the last checkpoint they reached. Progress is not saved on replay mode, though you still can get ranks. Even if you get a B on replay, it will stay the A or S you had before.

Upon clicking “New Game”, you’ll be presented with some text, it reads “It is Done.. Now my Faith lies in Darkness…” Once the player sees this text, it will commence to showing a shadowy women.

When the player presses F, the women will come into view, and is revealed to be wearing very fancy garments, such as a cloak, and a ring on her finger.

The player must then listen to the Women, whom’s name is Bierce, give a detailed explanation of how he got there.

The cutscene then closes, and a the player can find a large golden statue, in the center of the ballroom-like area. Ten portal lay on the immediate left and right of the players, although they’re all lock for now. Walk over to Bierce, who stands near the closest portal, to the left of the players. Bierce will then say ‘Clocks Ticking’, and the portal next to her will open up. 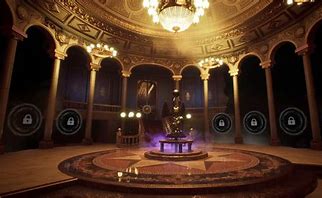 It is revealed that a monkey face is on the portal.

The player must enter the portal, and they will find themselves in one of the ten corridors, leading to levels, connected to the ballroom. A black doorway sits at the end of the corridor, and whispering can be heard. When the player enters the doorway, level 1 begins.

When the player enters the doorway, they get presented with the words Monkey Business, and the spinning icon of its portal. They enter the hotel map. 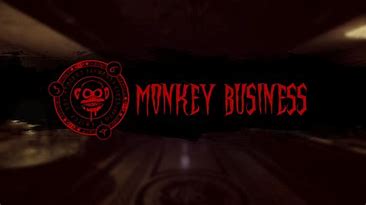 The player must wait and enter the elevator. The player can hear Beirce ask ‘Going Up?’. When the elevator arrives on floor two, Beirce will give a tutorial to the player, which can be skipped.

The player is giving a tablet, which they can use to view the map layout of the level. It can also detect each shards location, and be zoomed in and out use the Z key. Use space to toggle it as well. If a yellow or red dot are seen, they are stun orbs, and reveal shards. 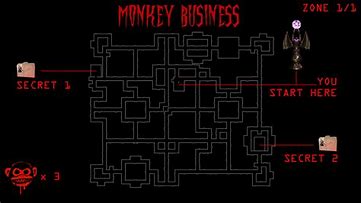 The yellow ones are stun orbs, which will make the monkeys unable to move, or harm the player.

The red shards are reveal shards, which will allow the player to see the monkeys locations, on the tablet itself!
The player then must break the boarded up doorways and begin the collect of Soul Shards, which must be gathered to escape the level. This level has 289.

This level has three monsters, called murder monkeys. They spawn in the lower right, lower left, and upper right corners. 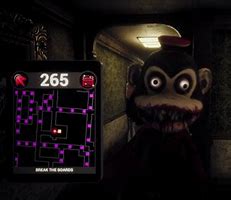 The player must run and hide from the monkeys, if they come in contact with the player, the player will lose a life. The player starts off with three lives, and if all the lives are lost, the player must start at the last checkpoint. The can also choose restart, which will restart the ENTIRE level. A checkpoint can be detected by the blinking notification in the lower right corner of you’re screen. 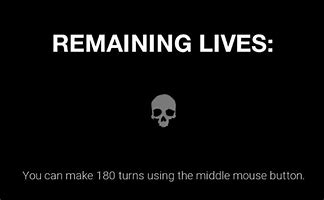 Once all the shards are collected, the player must return to the elevator room, the monkeys are now faster, and have red eyes. The player needs to click on the altar in the room and collect the ring piece. 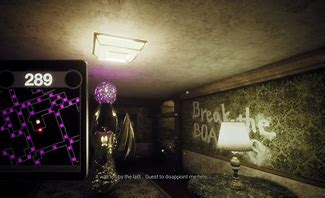 They will hear a voice that says ‘Hrggg.. Who dares?’ and Beirce will hurriedly tell the player to get back to the portal. When the player enters the elevator, a fourth monkey bursts from a doorway in front of them. The elevator doors slam shut, and the player is taken back to the lobby, where the six other elevators open, and twelve red-eyed murder monkeys pursue the player.

The player runs into the portal to escape Monkey Business.
They are displayed with their ranks.

This is the Second level, Although, note that it must be bought in the steam store before it is playable.

The player returns to Beirce’s Ballroom, for level two.
A cutscene plays, introducing the player to Malak, the demon. The player then, must enter a portal that depicts a creepy child, grinning. They are confronted with a wall of red strings, a Speed Barrier. The players must return to the ballroom, and collect the Speed Boost Power. This can be used (With cooldown) to run extra fast, and must be used to get through a speed barrier. You press Q and E to activate powers, and 1 and 2 to change them out. You currently will only have one power, but power will be gained overtime. The player then enters the black doorway into Agatha Elementary.

The player is confronted with another speed barrier, and a school bus, seemingly crashed through the wall by Malak. This is a barrier, the player will confront at the escape of the level!

The player then goes through a set of doors, that must be clicked to open. They will then go into the auditorium and through a cutscene, introducing Agatha – the enemy of the level. She can teleport, and unlike the monkeys, only chases when the player is in sight of her. Coming in contact with her will result in the loss of a life. She is also the fastest enemy in the game, so it is crucial to Speed boost when shes in pursuit.

This level has 283 Soul shards. 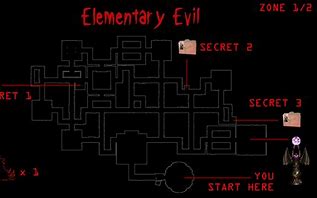 At 156 left, the player must proceed through a playground into the more demented area of Agatha Elementary. Agatha will become more dangerous, and constantly teleport around in random places on the map. 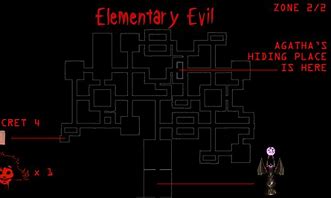 If she sees the player, she will attempt to teleport around you, as well as behind. This can catch the player by surprise.

Tip: Hide in Agatha’s Hiding Spot. It works as both a safe place, and an achievement as well!

Once all Shards have been gotten, then the player needs to speed boost back to the playground. Once the ring piece has been collected, Agatha will teleport behind the player, and yell at them in anger. She is now in her frenzy mode, and has red eyes. Malak will spawn in her place, and begin chasing the player. They must get back to the real portal, but fake ones now line the hallways. If a portal is touched, Agatha will begin chasing the player as well as Malak. Note that he is the slowest enemy, but he speeds up when he goes around a corner. 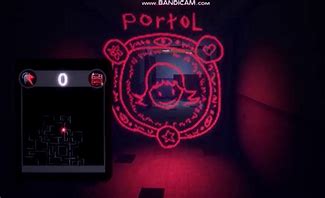 Speed boost and get to the auditorium, Agatha will spawn in front of the player, then teleport behind them. She will walk towards the player, but Beirce will unlock the doors to the portal, and Agatha will chase them.

The player must dodge the school bus and run into the portal, while being pursued by gurgling Agatha.

Run into the portal to escape Elementary Evil.
You will be displayed with your ranks.

This is the conclusion of this tutorial, if this can get good ratings, I will add more levels to this guide! I hope you found it helpful!

I hope you enjoy the Guide we share about Dark Deception – Chapter 1 – 3 Guide!; if you think we forget to add or we should add more information, please let us know via commenting below! See you soon!