Since H1Z1 is coming back and lots of new players and old players who forgot the ways are coming back, I wanted to make a in depth tutorial on how to get better at a lot of in game fights you may encounter (Car v Car Fights, Tracking Cars, and 2 Tapping), with a few extra movement tricks and Inventory tricks to put helmets on quicker.

Since H1Z1 is coming back and lots of new players and old players who forgot the ways are coming back, I wanted to make a in depth tutorial on how to get better at a lot of in game fights you may encounter (Car v Car Fights, Tracking Cars, and 2 Tapping), with a few extra movement tricks and Inventory tricks to put helmets on quicker.

In H1, in order to do better at most gunplay fights (2 Taps, Car Spraying, peek fighting, etc) you must understand how the Bullet Speed/Bullet Drop for the AR-15 and AK47 work. In order to practice these things, there’s a few ways to practice this in combat training for about 10 minutes, so you can quickly get back into the BR lobbies and start slaying.

Bullet Speed is the most important thing to learn first before bullet drop, since things like hitting moving targets are a lot harder than those who are standstill, which better players will always be able to do. In order to learn bullet speed faster, learn to walk and 2 tap at the same time, as you are trying to shoot them relative to where the players will be later.

Since you can instantly ADS and stop ADS-ing instantly in Z1BR, the simplest way to do a “walking 2 tap” is to ADS Quickly, shoot, and un-ADS.

ONLY practice this in combat training for 5 – 10 minutes, as doing it in-game will make it a lot easier for other players to spray you down sometimes. When you do this, you’ll realize when to adjust either to the left to the right quickly when people are trying to 2 tap you down close or far ranges.

Bullet Drop is another important thing to learn in H1Z1 that only comes with time and practice to learn, and if you want to learn this a little bit quicker, best way is to just follow these guidelines for bullet drop:

and if you do have the opportunity in combat training, practice shooting cars at various close – long ranges to see if you can hit them with a hitmarker, when you are able to do that consistently, you should be able to reposition your crosshair more often when you do miss a shot, like in this clip i show here.

How to Track Cars Better:

In H1, you will be facing a lot of cars that people will be driving in to use as cover defensively or aggressively, and the way to stomp them out is to be able to kill them while in the car, which is really hard.

There isn’t really a “simple” way to practice this in combat training since there aren’t a lot of cars used, but when you are in regular solos/duos/fives, it’s best to practice shooting people out of cars here. Here are some guidelines as to how you should be shooting them whether they are close range or far range moving left/right of you:

When you do get used to how the cars move and when to shoot relative to where they will be in terms of bullet speed, you will be able to do something similar to this.

And when you are tracking people in Cars forwards/backwards to you, this will be based similar off of how long/close you are, so try and use the bullet drop ranges from before if you want to hit, aka:

While Car-Fighting in H1Z1, being able to use cars as defensive and offensive cover in fights is very important, and there are a few tricks to help improve survivability offensively and defensively against people who are firing onto you.

If you want to learn how to counter people who will be trying to 2 tap you out of the car via car tracking/car spraying, the best way to counter is via car drifting left and right, so you’re harder to hit. The way you do this is by:

Another trick is Seat Swapping, where you can switch seats in the car during fights to gain an upper hand. Please don’t do this on the truck or else you could be easily shot and killed since there isn’t any cover), and don’t do this with the Lamborghini since there is no way for the enemy to shoot you back, turning you into an unkillable machine. To seat swap, when the car is not moving, press:

DON’T STAY TOO LONG OUT OF COVER NEAR CARS!

When you don’t have the upper hand constantly in the fight, focus on getting into the car and moving around if you don’t hit a 2 tap instantly, since that means more time for the enemy to shoot at you and kill you when possible.

STAY BEHIND THE TIRES OF THE CAR WHEN YOU’RE BEHIND IT.

Putting your feet where the middle of the car is will always cause you to be prone to people shooting your feet and killing you and even better players forget to do this sometimes, so always remember to keep your feet behind the wheels for extra cover.

When you’re in fights, you’ll always be needing to constantly heal up or put on another piece of armor quickly to protect yourself. To make it easier to put back on helmets quickly, i suggest putting on “Center Inventory” in Gameplay settings here: 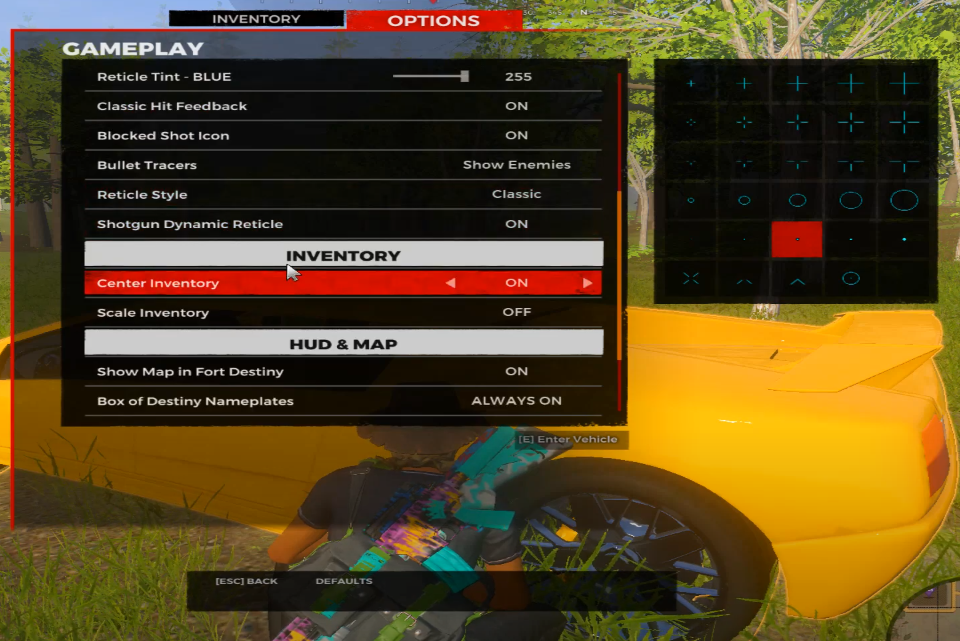 This will allow you to obviously quickly move your mouse to the helmet and quickly click on your helmets during a fight, so that way the second that someone pops your helmet off you can quickly put it back on.

In H1Z1, there’s a few movement tricks that you can use in order to outplay your opponents in certain fights or even use to outrun the gas if you don’t have a vehicle, so here are the ways you can improve your movement!

Binoc Sliding allows you to cancel the weighted jump animation (if you only press space and no movement keys) via switching weapons. In order to do this, you must:

You can do this with multiple different combinations such as Fists to guns, guns to fists, etc.

Snake jumping is the harder evolution to snake jumping, where you use the binoc slide to cancel the regular walking animation at the end with a prone, causing the “snake jump”. To do this, you must:

PRESS 5, JUMP AND IMMEDIATELY PRESS EITHER 1/2/3/4/6, PRESS W AND AT THE EXACT END OF THE SLIDE ANIMATION PRESS PRONE.

It’s very inconsistent to do and is only useful for flexxing purposes, however if you want to do this more consistently, bind prone to scroll wheel and continue scrolling until the end of the slide.

When shotgun fighting you can get the upper hand in a few situations by doing a quick dropshot, where you press the crouch button after you started proning to be faster. To do this, you have to:

If you don’t have a car and need to get around quickly in situations, the fastest you can go is Grenade moonwalking. It boosts your speed up to max running speed (conveys), and allows you to turn at really fast speeds, even making you unhittable in certain situations sometimes. To do this,

However this is a really old bug that is patched, so if the game ever has an update or gets reverted, this trick will be patched out, so beware.

If you got to the end of this tutorial, you should now be able to grasp the intermediate concepts/mechanics to fight better in H1Z1 now!

Thanks for reading, and I hope you have a good day fragging in H1Z1!

This is all about Z1 Battle Royale – HOW TO IMPROVE AT H1Z1 FIGHTS! (Car Fights, Walking 2 Taps, Car Tracking); I hope you enjoy reading the Guide! If you feel like we should add more information or we forget/mistake, please let us know via commenting below, and thanks! See you soon!