Need a refresher? haven’t played since GX aired? don’t worry I’m going to break down each of the card types and extra deck monsters giving them full explanation on what they can do and how they are summoned.


This guide will cover


Ritual, Normal, and most Effect monsters are still the same as you remember them as well as fusion however Fusion monsters have changed a bit since last time, lets dive in shall we? 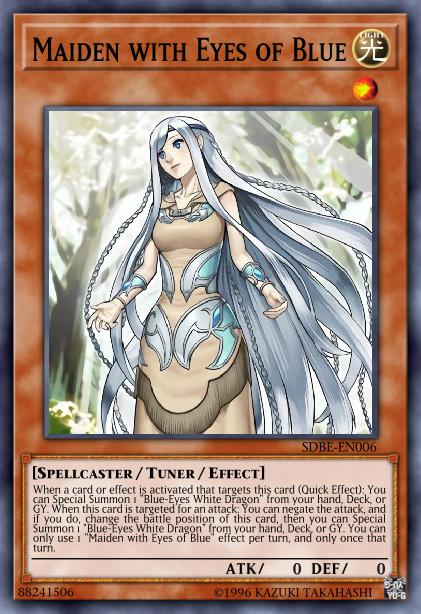 For the most part Effect monsters still work the same as before as well as flipped however monsters also have quick effects that work like traps, example being Maiden with Eyes of Blue her effect can be activated when attacked or targeted by a spell/trap (your spells can also trigger this effect) however because it has to be targeted, spells like Dark Hole or Raigeki wont trigger it since it destroys all monsters and doesn’t target a specific monster or zone. 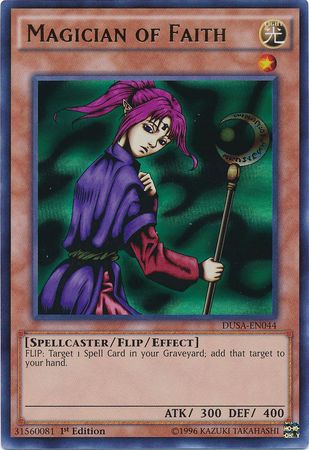 Flip effect monsters have been re-printed to include it as (we’ll use ]Magician of Faith as an example) [Spellcaster/Flip/Effect] and these changes are applied to IRL as well but older flip effects can still be used.


another common effect type are summoning types similar to the LV monsters except these types of monsters need to be summoned that way and cannot be tribute summoned or special summoned by any other means. 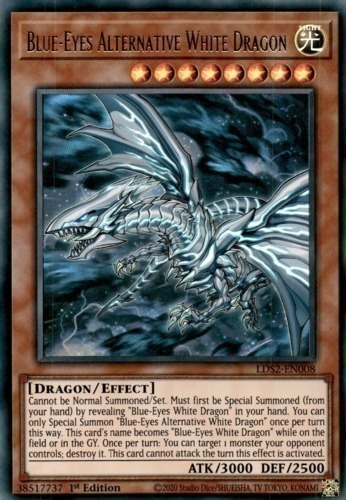 Lets use Blue Eyes Alternative White Dragon as an example of this summoning requirement, as you can see the player must have a regular Blue Eyes White Dragon in order to special summon it to the field from the hand as long as they reveal it. Yes BEAWD also has its own special effect on top of the summoning requirement but in most cases these types of monsters will usually have an effect to go with it unlike Wall Shadow which completely nerfs Shadow Ghouls effect entirely.

Fusion Monsters back in the day weren’t all that good in terms of summoning conditions or even effects which seemed situational, now most fusion monsters either have a good effect, high attack, or both. 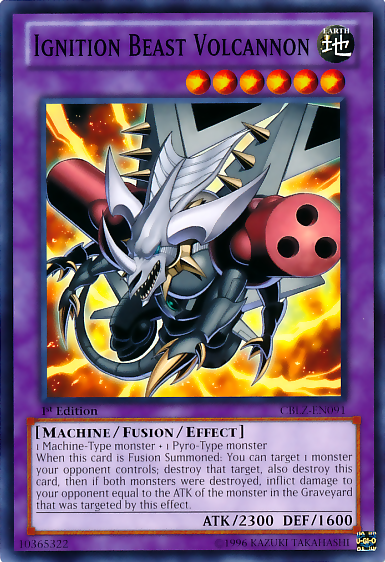 The Extra Deck limit is 15 cards with the rule of 3 still in effect, so a fusion based deck is possible to do even to the point your deck as all sorts of type fusion monsters like Ignition Beast Volcannon loaded into your extra deck plus Fusion Gate can make for a deadly combination.

Syncro Summoning was first introduced in Yu-Gi-Oh! 5D’s, This is probably the point most old school players dropped off at. The means to summon these new monsters is quite simple actually and is a simple game of math with exact equations, basically to Syncro summon you need at least 2 things a Tuner monster and a non-Tuner monster (refer to Maiden with Eyes of Blue for a tuner example), this however also needs to have their levels equal out to the level of the Syncro monster. 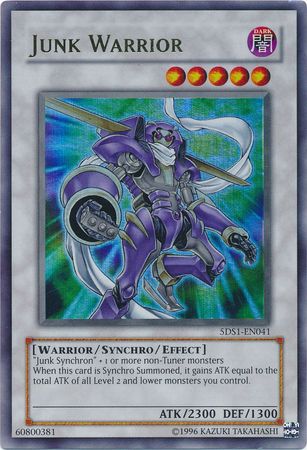 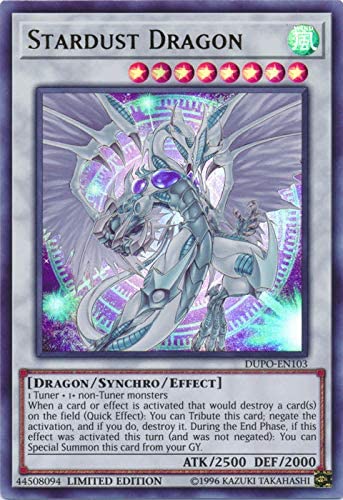 
Taking Junk Warrior as an example the Tuner monster Junk Syncron is a level 3 tuner with the effect to special summon a level 2 warrior from the GY and Syncro Summoning works like a special summon and for syncro summoning you must have the monsters used for it on the field. Once your monsters are on the field you can conduct the Syncro Summon to bring out Junk Warrior all in the span of 1 turn if you let a level 2 warrior get destroyed prior to summoning Junk Syncron.

Xyz (Eck-see-s) Summoning is very similar to Syncro summoning and that Materials used must be on the field however they MUST be the same level in order to Xyz Summon. One thing to note about Xyz monsters and that they don’t use Levels, they use Ranks so cards that specify say summoning monsters from the GY totalling so-and-so level wouldnt allow you to bring back out your Xyz monster. 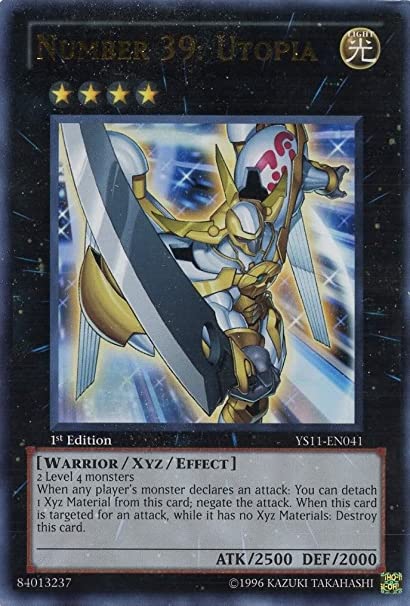 Above is one of the many numbered Xyz monsters and one thing to note when summoning an Xyz monster is that you don’t put the monsters used for it in the GY you instead place them under the Xyz monster as those are its materials and as shown above Utopia has an effect that requires you to “detach 1 material” and some Xyz monsters will allow you to add more than 2 monsters in it. some Xyz will require 3 monsters of the same level in order to summon, however the more materials the more useful the effect will be but not all Xyz monster require detaching, some Xyz monsters have passive effects that only trigger depending on how many materials it has.


I still remember being shocked that Xyz monsters use ranks and not levels when attmepting to Four-Starred Ladybug of Doom Pegasus’ Pearl Gemstone Knight in Millennium Duels… i thought those were busted until….

Pendulum monsters are hybrid cards acting both as monsters and Continuous Spell cards. In order to explain it better it’s best to show a card and explain it afterwards. 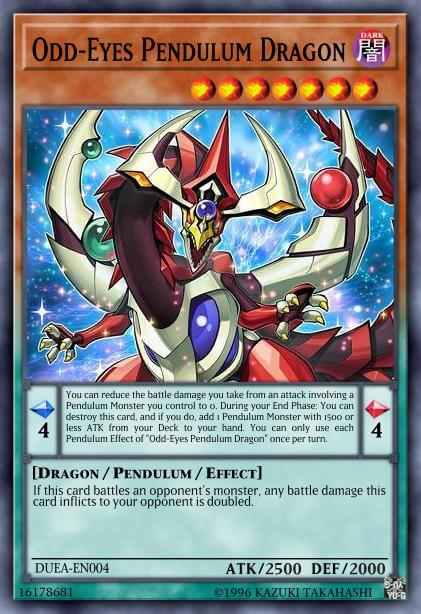 This what the layout of Pendulum monsters are, now the first thing your asking is “why are there 2 flavor text boxes” and second being “what are those icons on the side of the top box” The top box is the Pendulum Effect that only works in the Pendulum zones (used to be their own dedicated zones but got moved to being the far left and far right spell/trap zone) and the icon with numbers is this cards Pendulum Scale.


If a pendulum monster is destroyed they aren’t sent to the GY instead they are placed face up on the Extra Deck of which they can be brought back out via Pendulum Summoning.


When the Scale is set then you can conduct a Pendulum summon which allows you to summon as many monsters who’s level is within the Pendulum Scale from your hand and Extra Deck (face up pendulum monsters only) if done right you could easily summon Odd-Eyes Pendulum Dragon turn 1 if lucky.


When I first heard about how this worked I about freaked as the idea of summoning basically your entire hand in a single turn felt a beat broken failing to realize players can do that anyways with anything if played right so how little i was wrong.

Link monsters are very different from the rest of the card types, they work like Syncro and Xyz with the only thing you need is monsters or monsters of a specific type in order to Link Summon. Link Monsters can only go in the Extra Monster zone above the regular monster zones, no you cannot use both slots however you can use either or. 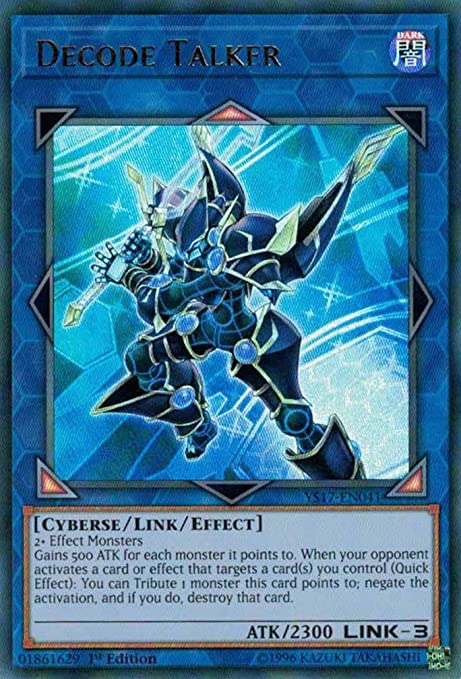 The first thinkg you’ll be wondering is wheres the level, why is defense replaced with Link, and why are there arrows around the card art?


The Level is essentially the Link rating at the bottom which is determined by the number of Arrows lit up. In order to Link Summon Decode Talker you’ll need 3 Effect monsters in total, and yes Link monsters can also apply to this as well.


The Arrows do two different things, they tell what zones are effected by the monsters effect and they also tell where your next Link Summon can go, yes Link monsters go from the Extra Monster zone to wherever the arrows point to so long as its on your side of the field and be careful cause your opponent can Link off your Link Monster as well so do keep that in mind.


Link monsters while they lack in ATK at times their effects can back them up, thats not to say theres some Link Monsters out there that have no effect and only 1000 ATK.

How it changed the card placement

Once links were introduced all games featuring them onward would allow players to place their monsters, spells/traps in any of their respective Zones. The Extra Monster Zone isn’t exclusive to Link Monsters, any Extra Deck monster can be placed there giving you a total of 6 monster zones to work with.

This may not be the best guide out there but I just wanted to give returning players a chance to catch up on how all the cards work. I myself kinda stopped playing back in 2003-2004 on the count i had no one to actually play with so I was looking away on that for a while.


I came back to the game about 2010-2011 in playing Millennium Duels (boy what a mistake that was for me) so to get used to the new mechanics behind these cards were a bit confusing. Then I noticed Legacy of the Duelist: Link Evolution and was even more confused with Pendulum and Link monsters added (didnt really own it but i did see a few things) it wasn’t until like 2019 when I started playing Duel Links that really brought me back into the game. A buddy of mine ended up buying a few structure decks and giving me 2 of them; the Obelisk deck, and a Cyberse one, using the Cyberse deck was my first introduction to link monsters and I had no Idea how to play them.


I’m really glad Master Duel is a thing as it allows me to actually collect the cards again with greater chance of getting what I need rather than hoping to get the card I need in a $3.47 pack or what not (haven’t bought packs in a long time)


If I forgot any details on something just let me know and I’ll be sure to correct it and add your name to a special thanks section.

This is all about Yu-Gi-Oh! Master Duel – Card Types + Classes & Basic Gameplay Tips; I hope you enjoy reading the Guide! If you feel like we should add more information or we forget/mistake, please let us know via commenting below, and thanks! See you soon!