a guide for everything someone needs to know in XERA

The map has normal city’s, military basses, and areas for events. The map is very big so finding a car is essential in all stages of the game! at the start of the game finding a good place to build is a must, you need a good city with at least 2 car spawns in it, to be close to a settlement, and to be close to a good event such as a compound event or a heli crash site.

The red XOID’s are pretty simple to deal with, you can melee them or shot them 6 to 10 times and they will die, you can also stun look them with weapons like the pickaxe, they will deal around 8 – 10 damage per swing and you can outrun them.

The blue XOID’s or the “stalker’s” are the upgraded version of the red one’s, the are as fast as you. You cant stun lock them, you cant run them over with a car, they have about double the health of a normal XOID and they deal about 16 – 20 damage per swing, you need to watch out for those and avoid using melee against them

The green XOID’s or the “heavy” is the hardest of them all, he has about 10x the health or a normal XOID and armor protecting his body, hes much faster then you so you cant outrun him and he deals a crazy 30 – 40 damage per swing.

How to deal with XOID’s

Having a car is a must when trying to take down XOID’s, when you are driving you can run the red XOID’s over when you are over 30km and when u need to kill the blue XOID’s and the green one’s you can stand inside of the car and jump to shot them without them being able to attack you back!

There are 2 types of vehicle, the ATV which is a 1 person car and the buggy which can carry 3 people. Vehicle spawn in different parts of the map and its important to build your base near at least 2 car spawns.

Here is a car spawn map for season 5 (not mine) 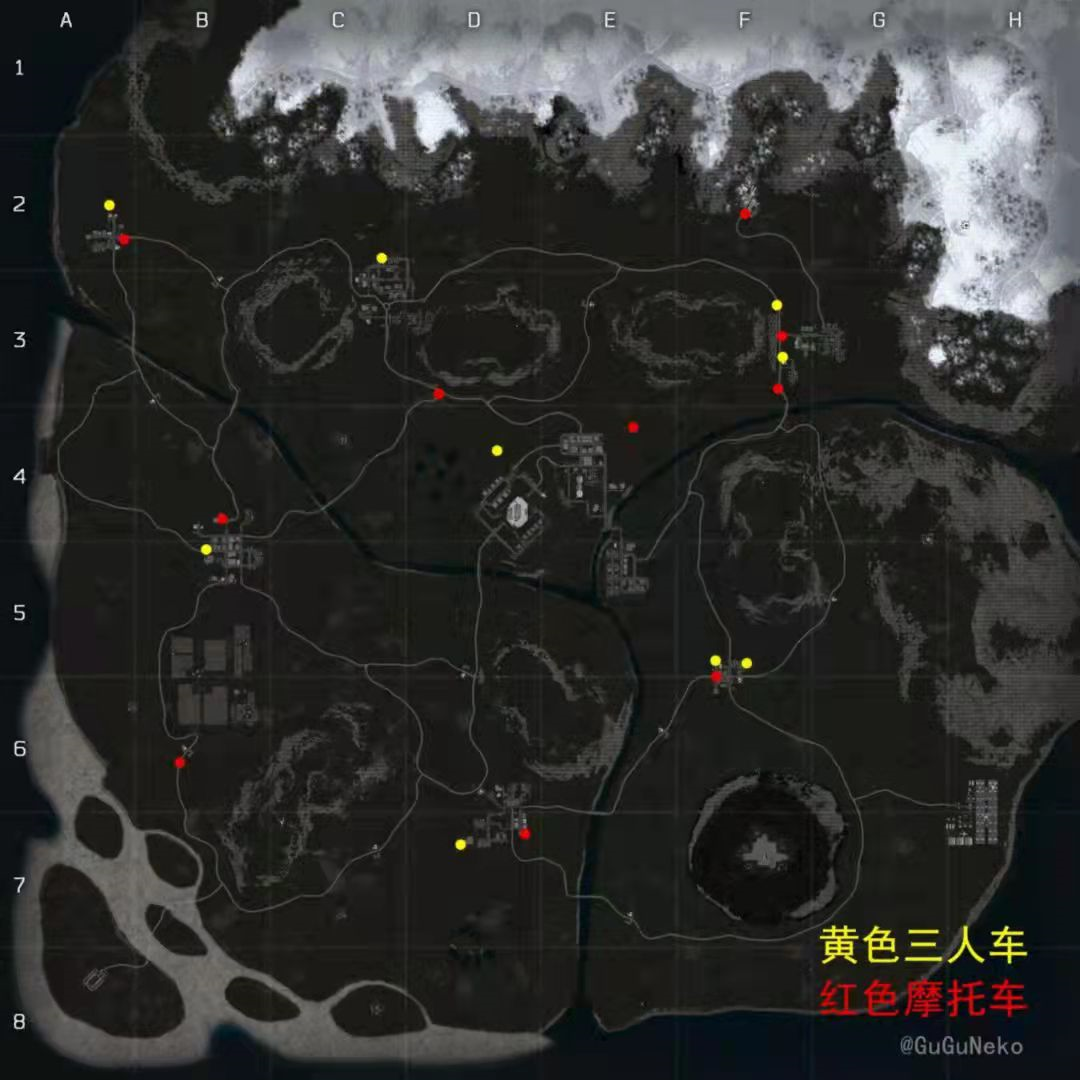 In the compound event you will have to kill 30 XOID’s (the robots) there will be around 25 normal XOID’s (red), 4 Stalker XOID’s (blue) and 1 heavy XOID (green). To proper u will need a car, a crowbar (to fix the car) enough gas, about 120 rounds and about 40 health worth of heals.

When you get the the event you would want the stop the car in front of the compound, get out of the car and run around collecting at much XOID’s as you can, once you have more then 5 on your back run back to the car (when you are in the car XOID’s cant hurt you) and just run them over, when the green XOID’s or the blue one comes after you just stand inside the car and jump to shoot while they cant hurt you. After the compound is done you will be able to loot a bunch of military creates and 3 airdrops!

The helicopter will crash once every about an hour and a half and will give high tier loot, it will have 1 green bot protecting the loot so make sure to bring a car and some ammo and be ready for a fight!

These events are kinda useless, it will give you about 400$ and some XP and spawn an airdrop in a random location of the map

Air drops will land every time someone fixed a radio tower in a random location of the map, the will contain armor heals a weapon and some ammo

How to get scrap metal and nails

The easiest way to get nails and scrap metal is to rush a furnace. With a furnace u can smelt metal ore to metal bars which can be used to craft 3 metal scrap each! you can also dismantle crowbars and metal pipes for metal scrap to get your first furnace!

This is all about XERA: Survival – Basic Game Mechanic in Season 5 + Tips; I hope you enjoy reading the Guide! If you feel like we should add more information or we forget/mistake, please let us know via commenting below, and thanks! See you soon!