This guide is about We Who Are About To Die – Gameplay Overview/Survival Tips. This guide contains basic gameplay, a general overview, combat mechanics, tips, and tricks. Please comment below if you have suggestions for improvement. If you have any questions or concerns or want an explanation of something that isn’t there, let me know. This is still a work in process.

We Who Are About to Die is a brutal roguelike. It’s almost like Chivalry 2 combined with Human Fall Flat or Gang Beasts had an odd baby. You should be prepared to die a lot. Your decisions matter, a lot.

Once you have chosen your backstory, you can start the game.

There are two phases to the game: the preparation phase and the combat phase. After healing, selling and buying gear, and deciding which fights you want to participate in, you choose a scenario you wish to participate in.

Although the first few matches are often relatively easy, it quickly becomes difficult, and your decisions will make a huge difference in your success. To reduce risk and increase your chances of survival, you must assess every aspect of combat. 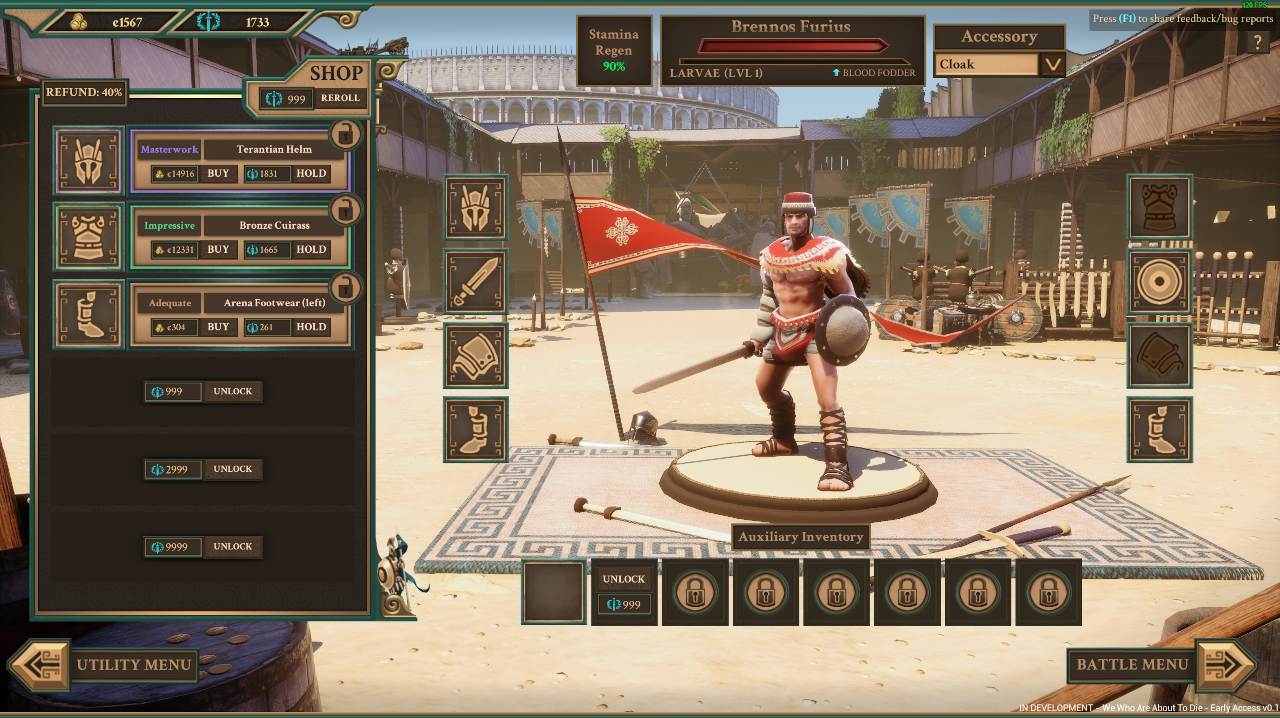 After selecting your backstory and each combat phase, the armory menu is where you will be brought to. You can sell or buy your gear here. Also, you can review basic information about your character such as health, stamina, armor ratings, and weapon damage.

WHY DOES MY AIM SUCK?

Please leave a comment if you have any suggestions for improvement. Please let me know if you have any questions or concerns or would like an explanation for something that isn’t covered. This is still in the works.

WHY IS MY BLOCK SUCKED?

The same as before. It’s easier to identify a block’s likelihood of success or failure than an attack. Your mouse reticle changes to a shield symbol when you block. This icon will appear brighter if a block has a higher probability of occurring and darker if it is less likely. You can increase your chances of blocking an attacker’s attack by hovering your mouse cursor over their weapon and holding block until they release their attack. You don’t necessarily need a bright blue shield to block an attack. Sometimes you can block an attacker without blocking it. Other times you can block an attacker while attacking. Your shield and weapon are physics objects and will collide with enemy weapons. You are safe if the enemy weapon does not hit your player model.

Ranking milestones are reached as you increase your character score. After completing the combat phase, you can choose between two random bonuses for each rank milestone.

These are the available brackets:

The 1 vs1 and Many vs1 scenarios are the most straightforward. These “easier” scenarios can be more difficult due to the combat level. You might consider a level 3 Many-vs-Many scenario if you have low gear and are poor.

It’s exactly what it sounds. Hot man on man action.

The daredevil challenge. You will need to take on several weaker opponents at once. Random numbers of opponents can range from 2 to X. They are generally weaker but this mode of play is certainly the most difficult. Even at lower difficulty levels, you will need the right weapon to survive.

Random opponents can range from 2 to X.

Many vs. Many Bracket

You can’t take a backseat to your teammates. Otherwise, you will likely be fighting against strong opponents at the end of the match. The teams are equal in size and the number of players can vary from 2 to X.

Randomly chooses one of these Combat Brackets. The rewards for the scenario are the same as the reward calculations.

Hope you enjoy the Guide about We Who Are About To Die – Gameplay Overview/Survival Tips, if you think we should add extra information or forget something, please let us know via comment below, and we will do our best to fix or update as soon as possible!