Do you like to swarm your opponents with undead warriors that just won’t die? If so, then using The Warden to command his seven-piece warband through the twisting streets of Shadespire may be right up your, errrrr, street! 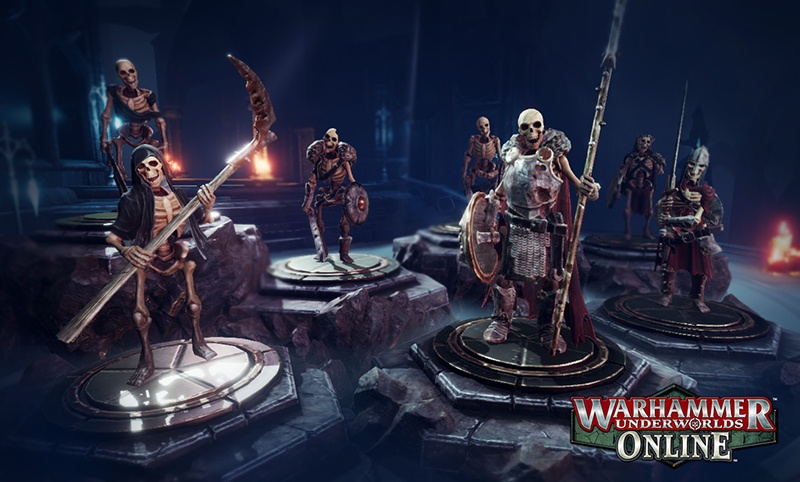 The Deathrattle of Shadespire are quite unlike the typical charnel slaves raised by minor necromancers and practitioners of fell magic. Their soul animus remains trapped within their decayed forms as a result of the curse of Nagash, and thus they retain a fragmented memory of their past lives long after their flesh has rotted away. Over time, many of these unfortunates have sworn themselves to the God of Death’s service, praying that by petitioning Nagash for forgiveness they may be freed from the agony of their existence.

Greatest amongst the faithful is the Sepulchral Warden, the former Lord Marshal of Shadespire. Such is his devotion to Nagash that this enigmatic creature has been gifted with the power to inspire frenzied devotion in his subjects, and he directs them against all who would challenge the Great Necromancer’s will.

LET’S LOOK AT THE DEATHRATTLE!

Attack Actions: Whirling scythe (scythe – targets all adjacent enemies)
Specials: None
Inspiration Condition: This fighter is returned to the battlefield
Inspired Bonuses: Whirling scythe (+1 dice, scythe), +1 move
Notes: The Harvester’s scything attack is deadly when used in tight group of enemy fighters. Even better if he is inspired!

The Prince of Dust

Attack Actions: Royal Mace (knockback 1)
Specials: None
Inspiration Condition: This fighter is returned to the battlefield
Inspired Bonuses: Royal Mace (+1 dice, knockback 1), +1 move
Notes: A worthy foe able to knockback enemies. In combination with the Champion and Harvester, he can be a deadly ally.

Attack Actions: Ancient Weapon
Specials: None
Inspiration Condition: This fighter is returned to the battlefield
Inspired Bonuses: Ancient Weapon (+1 dice), +1 move
Notes: Useful for claiming objectives or throwing into the melee and resurrecting in order to inspire the Warden!

What the Deathrattle lack in speed and raw power they more than make up for with overwhelming numbers and undying tenacity. A Deathrattle warband will almost always have numerical superiority, and you can use this advantage to swarm your opponent’s fighters and seize multiple objective markers. Even if some of your fighters are felled in the early stages of a game they can still be resurrected, and upon returning to the battlefield your skeletal troops become inspired, making them even deadlier. 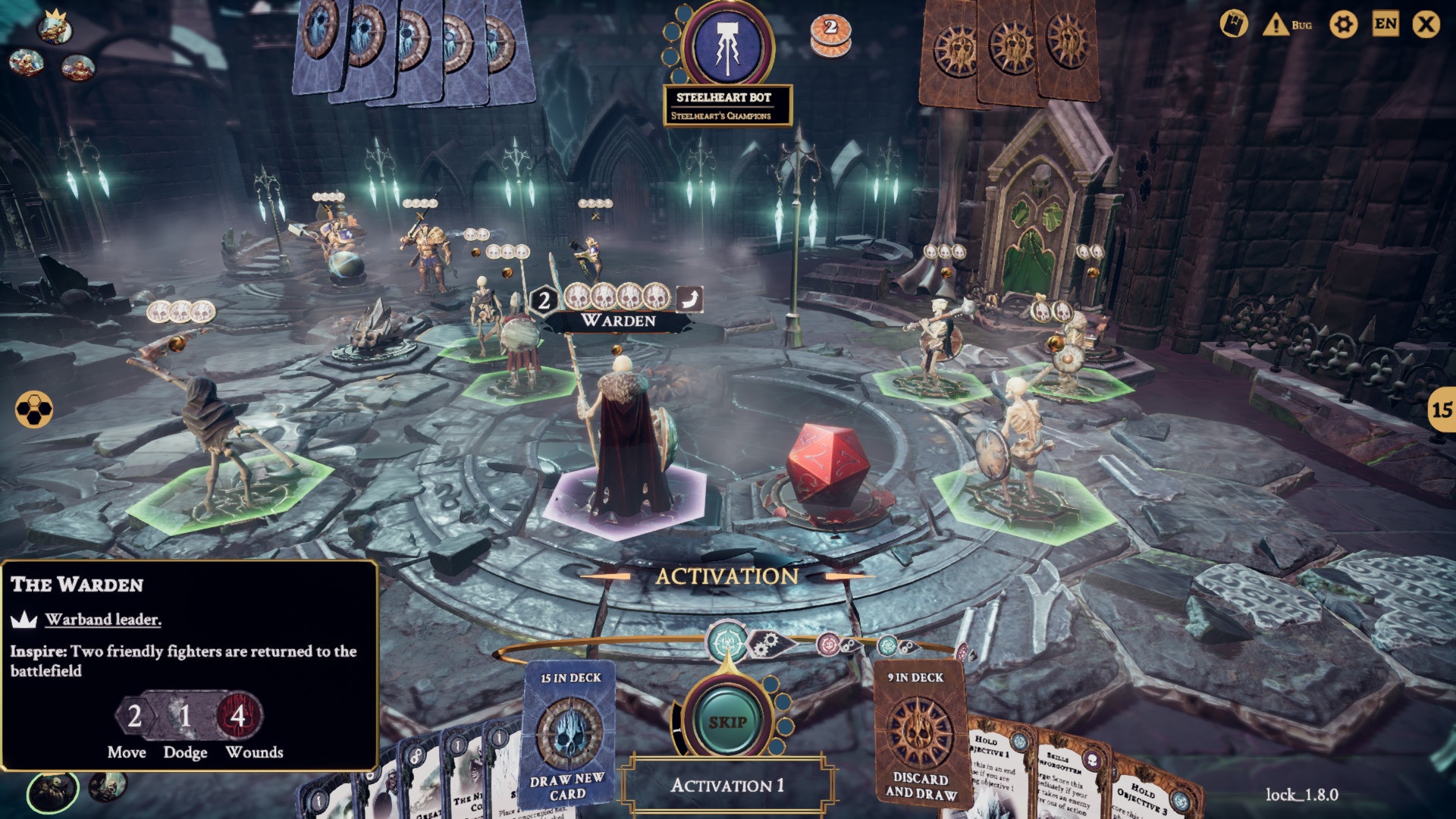 The centre of the Deathrattle warband is undoubtedly the Sepulchral Warden. He can bring back fallen fighters and move his thralls around the board – he even packs a devastating punch in combat. With a few upgrades placed on him, he truly becomes a spectre of death and a terrifying presence on the battlefield. 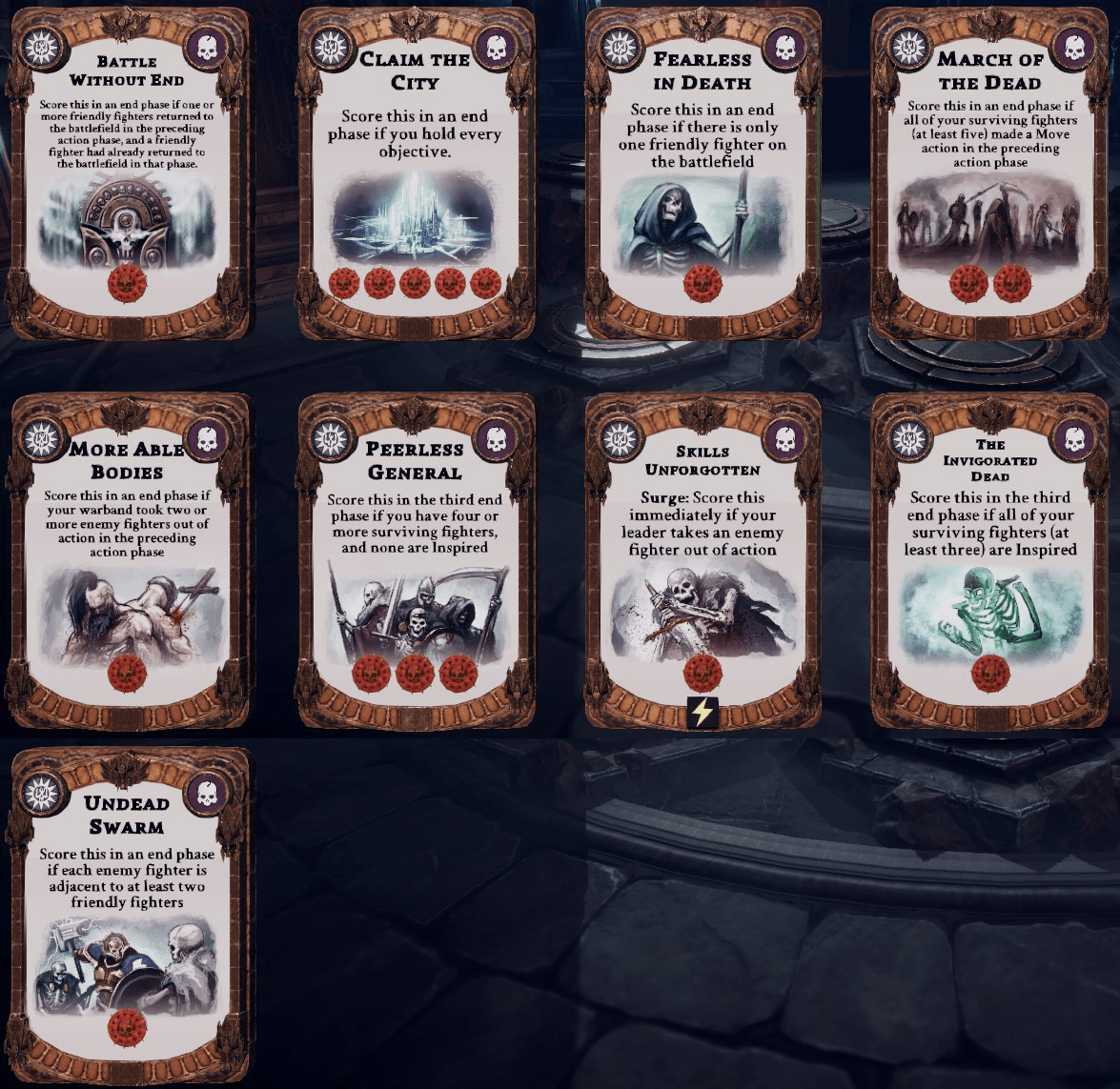 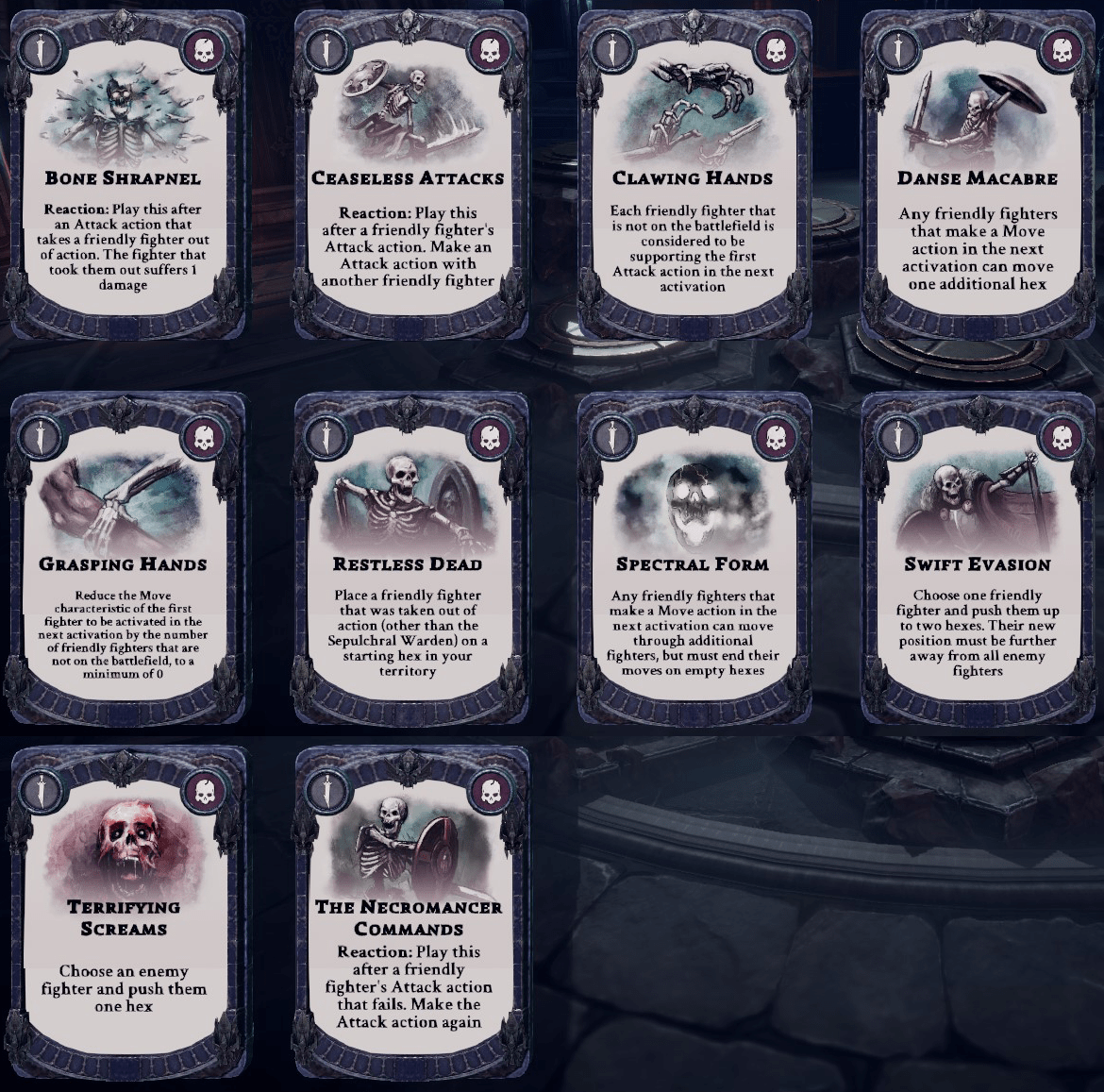 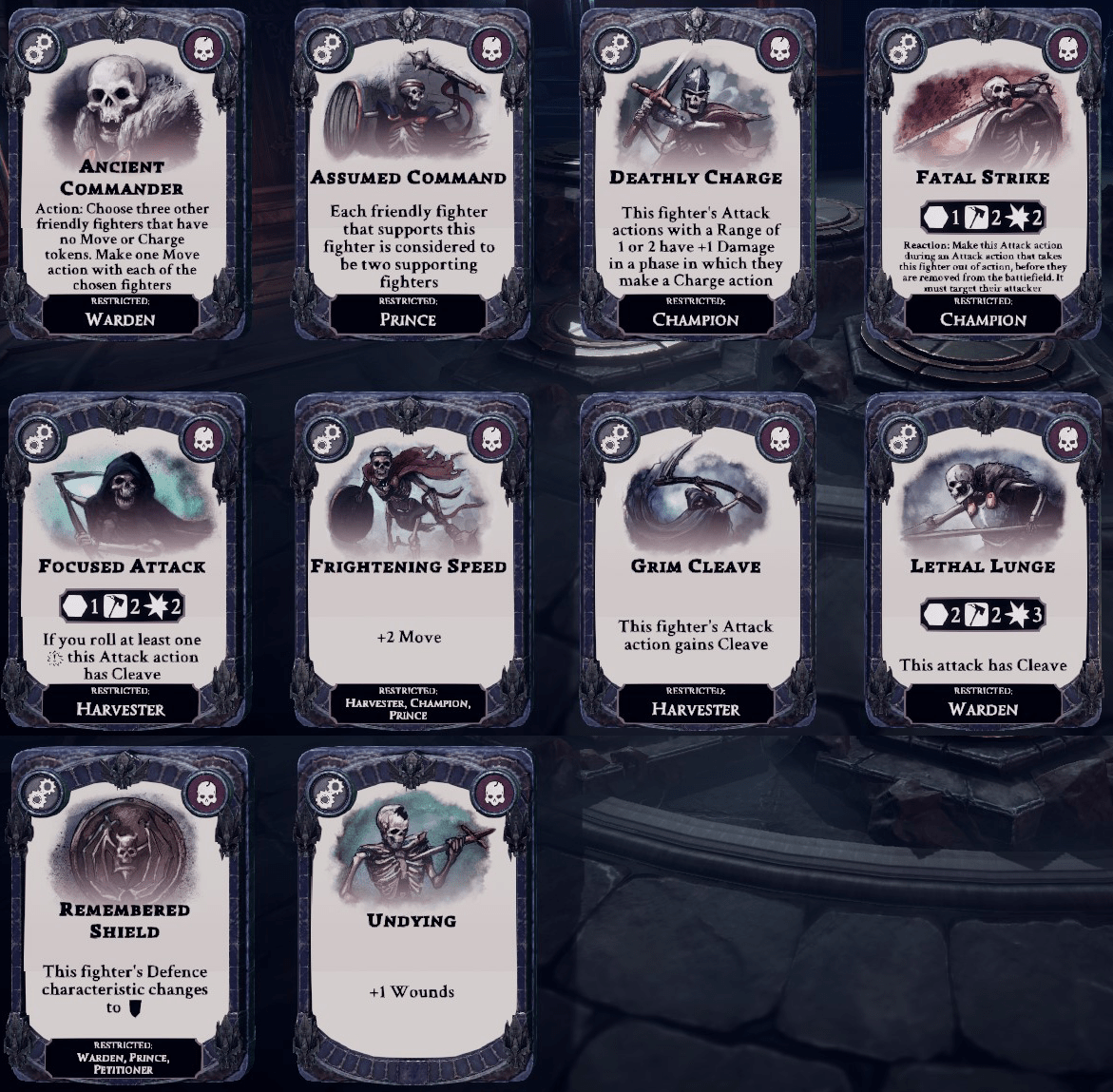 From the very beginning of a game, sheer weight of numbers gives the Deathrattle an edge. When placing fighters you can avoid committing to a strategy by deploying your Petitioners around the board. Soon, your opponent’s deployment will reveal their game plan, and you can position your heavy hitters to counter their strategy. This does mean that your opponent will almost always be able to take the first turn, but that is not necessarily a disadvantage. You want the opponent to charge your hordes of skeletons, and ideally cut one or two of your fighters down. When resurrected these fighters will be stronger, and the enemies – having charged – will be unable to fight back against them.

Knowing when and where to resurrect your fighters is key to victory for the Deathrattle. There’s little point in bringing a warrior back if they will simply get smashed to pieces again on your opponent’s turn. You will give away a victory point and gain very little in return. But it is worth remembering that upgrades remain on your fighters after they have been slain, so a heavily upgraded fighter has the potential to wreak massive damage on the enemy each time they are raised. 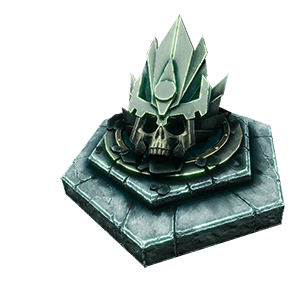 I hope you enjoy the Guide we share about Warhammer Underworlds: Online – Sepulchral Guard – Official DLC Guide; if you think we forget to add or we should add more information, please let us know via commenting below! See you soon!