Gaijin failed to make a proper tutorial for naval which is rife with too much misinformation and generalization. Everything I’ll tell you is from months of trial and error and making it to top tier.

The most important part about naval is how to hurt your opponents, so here’s a list of was to damage a ship.


Hull break: 250kgs are enough to one shot most boats and destroyers near the bow. For this reason, many 250kgs are more efficient at lower tiers than larger payloads loads. For higher tiers such as 5,7, switch to 1000kgs. (Note: please convert if you don’t use metric.)


Ammo detonation: Aiming at the ammo rack, torpedoes, depth charges, mines will damage or even detonate the rack, which can either kill or flood the ship. This is why mines and depth charges are a liability more than a useful weapon.


Crew knock out: with the naval rework, it labels the sections of the ship as compartment. This is where crew are and it works similarly to the World of Warships damage saturation mechanics. Shoot at the compartments to eliminate crew, but if a section turns black, aim for other sections since that part is already mostly damaged. Alternatively, the bridge of a ship is a good way to wipe a good portion of the crew. If you have a good aim, try going for the main gun, secondaries, and torpedo tubes since that also holds crew members.


Ramming/Flooding: The former is pretty self explanatory but usually only happens with small ships or your insufferable team mates. The later is often from the wonderful mechanic where your crew quits because they want to drink a beer on the torpedo tubes than put their friend burning alive in front of them.


Fire: Same as any other game mode except ventilation lowers crew loss chance per tick and ammo wetting lowers ammo damage per tick. Fire damage is essentially like poison damage.


The pictures to the right are examples of where compartments are. For boats, they’re usually the entire hull. For ships, you’re guaranteed to finds at least one or two under the main frontal guns. If you don’t know where to aim, spread out some damage or take out the main guns. 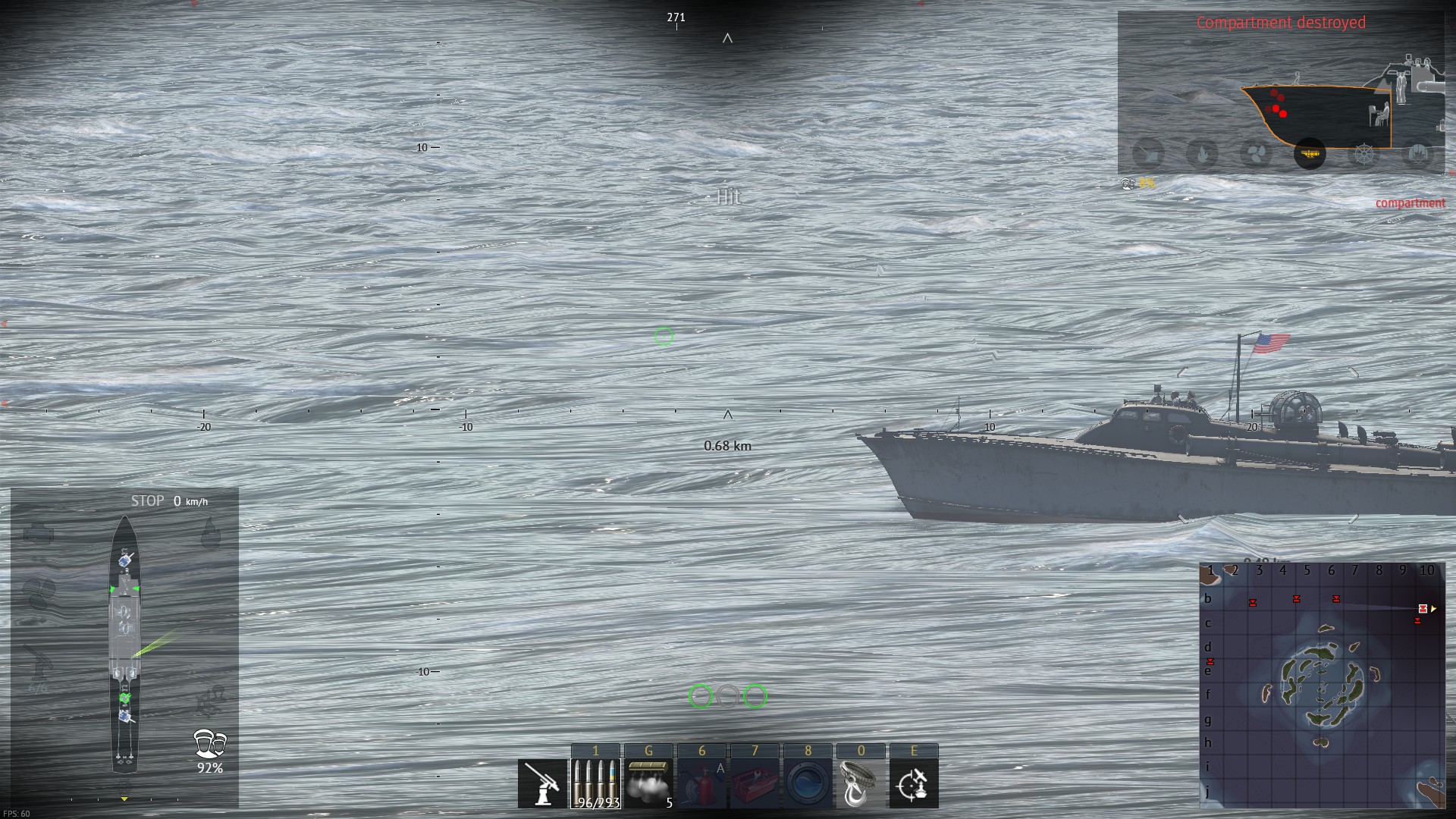 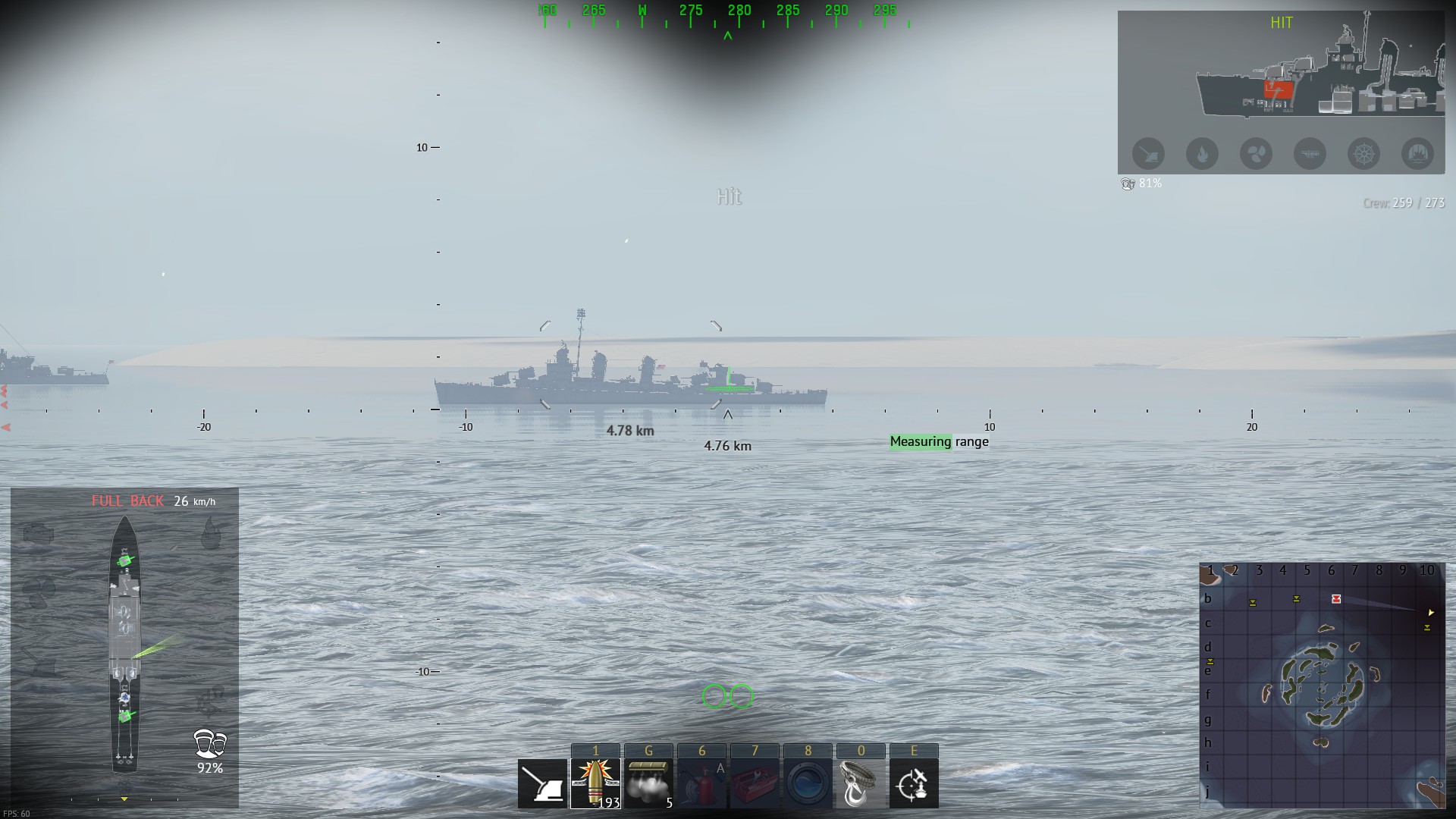 The ballistics are completely different from World of Warships to War Thunder. The longer you realize this, the longer you’ll survive. Naval players get a lead indicator for Arcade and something similar for realistic. I recommend new players get started with arcade since the mode is easier, has the same economy, and most players. Whilst your lead indicator will allow you to hit your target (most of the time), you should look at the pattern of how your ship, and the enemy ship moves in a specific scenario and where to aim.


Here are a couple real patterns you will encounter.


Same speed, same direction: Where you aim, is usually where you’ll hit


Same direction but you’re slower: you should lead your target. Especially if you’re fighting a destroyer in a cruiser.


Same direction but you’re faster: You might find yourself aiming behind a target in this scenario depending on the speed


You’re broadside but the enemy is heading towards you: shoot the opposite direction slightly from the ship.


The pattern you’ll notice is the shells deviate in the direction you’re moving towards. If you paid attention in physics, you’ve witnessed inertia. To better understand how your shell physics work, take your ship into test sail and practice aiming stationary using my tips and try a second round on the move.

The coastal Fleet is best used for capturing shallow capture zones and being a glass cannon when it comes to torpedoing heavy ships.


LS 3 (very small and agile. One of the best reserves)

R-41* (less than half as slow as the LS 3, poor ship due to this and lack of armor/armaments)

Any He-51 (same flight characteristics)

He-100 (fast aircraft but no cannons)

He-112 B-0 (Good turnfighter and powerful armament)


2,7 gets an overwhelming amount of picks, so let’s do a highlight:

VS-8 (premium made for laying mines, not a useful playstyle, wait for the VS-10)


AF D3* (105mms can pen destroyers, but you will be outgunned and torpedoed too easily)


3,7 We made it to reserve destroyer rank. from now on, I’ll note the best coastal ships to keep for naval. If you still wish to research this tree, only play coastal for faster research:


Albatross (76mm autocannon, radar, anti plane shell, wireguided torps. Only cons are no armor and the fact it doesn’t have the MM38 Exocet anti-ship missiles programmed for the ship yet. Keep this.)

M-17 (Durable, and HE base fuzed can pen destroyers. Keep if you find yourself dying in the Albatross too often)


I’ll finish the tree when I unlock more vehicles.

Bluewater is definitively considered the main fleet for ships with the cost being larger targets, slow speed, and inability to operate in shallow waters. Unless you have spare crew, three of your slots should be bluewater ships with the other two for planes. Anything with a star should be scraped ASAP.


Leopard (Decent reserve, but most guns are on the stern)

Either use another Leopard or best coastal vehicle

K2* (Slow speed, not a very useful ship as it’s outclassed by everything in the same BR)

Any destroyer since most play the same

Stick with the Stuka or Ju-88, AA gets more powerful

Any destroyer since most play the same


Emden* (A cruiser with 8 150mm destroyer guns, 4 per side. Can save you from being flanked as well as be an Azur Lane Waifu)

Any of your favorite spare ships

Emden* (One of the hardest hitting guns unlocked)

Z32* (Ditto but lack of AP makes this ship painful. If possible dump backups on Leipzig)


5,7 is a terrible BR since early on, you’ll get power crept at the start. The Hipper and Spee are two examples of what you could face. Similar to the coastal Fleet, we’ll do a highlight for the light cruisers:


Admiral Hipper (Comes with guns as powerful as her attitude in Azur Lane. Solid ship in general)

Admiral Graf Spee (Best cruiser guns for Germany. You could even spank battleships)

Prinz Eugen (Tough and powerful guns like Hipper. I recommend this premium if you really like the Hipper class)

Lineups for Japan (in progress)

Below are a list of lineups for every possible BR along with the best aircraft. Remember to chose one fighter and one bomber/strike aircraft so you aren’t forced to spawn a preset aircraft. I left notes as well. Anything with a star should be scraped as soon as the vehicle spaded.

Any Ki-10 (All have same performance)

T-14 (Good reserve but boat rocks hard. Use this one until you get something better.)

Soukou-Tei No. 4* (Same cons as the old variant but with bigger cannon but it can defend against aircraft better.)

Ki-45 (Has two bombs and heavy cannons, which makes it emergency CAS)

Type 38 (Amazing gun, but only one gun small magazine size)

Ha-Go* (Just use the secondary armament)

Any choice B6N2 (small loads but maneuverable) or the Ki-21 (large target, but more bombs)

End of Guide (For Now)

I plan for this guide to be the most comprehensive War Thunder Naval guide. Everything in this guide, I have taken from personal experience. All photos are my screenshot, for now. This guide doesn’t end here. You can contact my via Steam or Discord at SdwCdrGhost#3157 and help me add your tips to my guide. This is a community effort and I hope to one day guide new players through the horrors and torture of what is know is War Thunder naval.

Hope you enjoy the Guide about War Thunder – Tutorial for Naval Guide, if you think we should add extra information or forget something, please let us know via comment below, and we will do our best to fix or update as soon as possible!