Full Tutorial on how the Pulse Doppler Radar works in War Thunder AirRB.


MTI/LD radar modes should work with the same principle.

Pulse Doppler is a type of radar for planes in War Thunder.

Unlike Continuous Wave radar (or normal radar) in the game, it is immune to Ground Clutter which appears as a smearing effect on the radar when flying low or facing the ground.

This smearing effect means that the radar cannot search (and hence track) targets wherever it appears.

Reason for Ground Clutter or noise appearing on the radar is the fact that radar waves will be bounced back, therefore the radar will be unable to lock on any specific targets. Think about the ground as a giant target itself, that it is so big it hides anything smaller than itself.


Pulse Doppler radar on the other hand works based on Relative Velocity, which helps to filter out the ground clutter meaning regardless of the altitude you are flying at or the direction you are facing (ground/sky) it can search and track targets, with a caveat which will be explained below.


It is currently available on the following planes:

Here’s a schematic of a Pulse Doppler Radar in War Thunder: 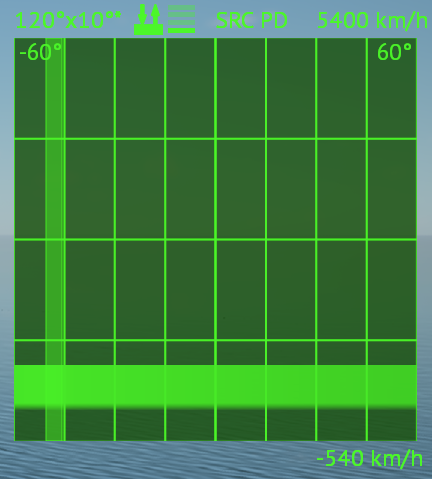 After obtaining the lock, the following information can be seen on the screen:

In this type of radar, the smearing effect (or filtering out effect) will appear when you gain speed.

The more speed increase, the bigger the smearing area: 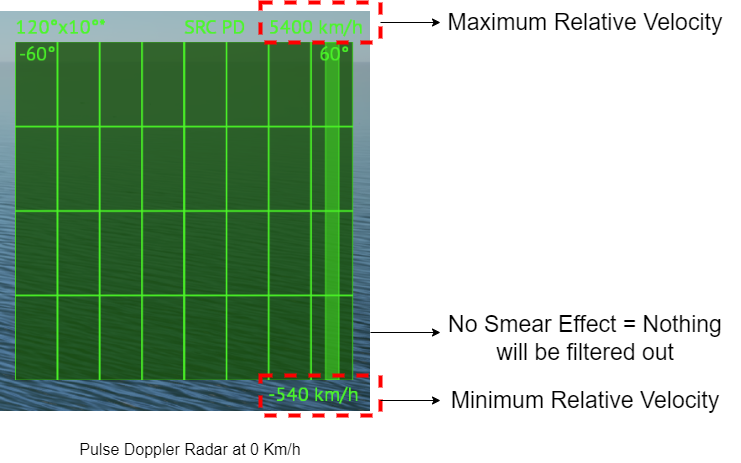 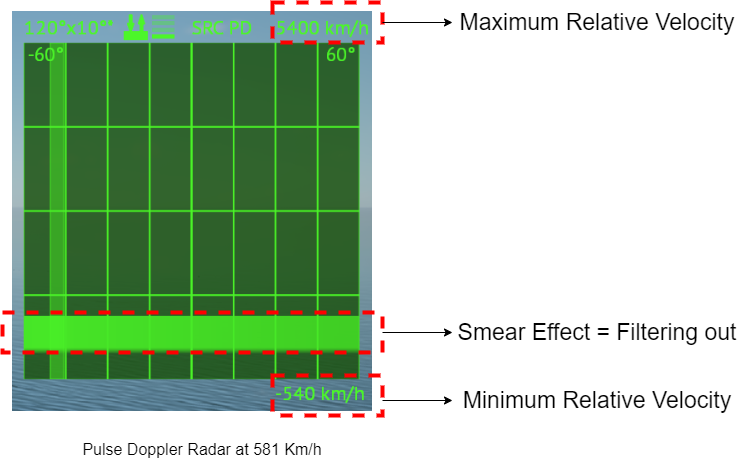 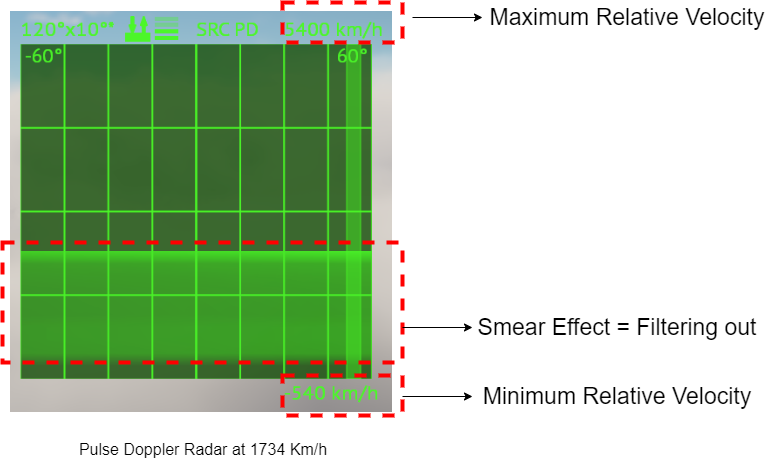 Please note that the radar will not be showing the distance, only the relative velocity.

This means if a target was above another, it has a higher relative velocity, as opposed to if it was further away from the other target which is the case in Continuous Wave (CW) radar.

This is obvious from the fact that Pulse Doppler radar does not show the minimum or maximum search distance, rather it shows the minimum and maximum relative speed in Km/H.

Pulse Doppler Radar – How It Works

I am not an expert on the matter of how a Pulse Doppler radar works in real life, however in the game it works based on the Relative Velocity.


Relative Velocity in classical physics is the velocity of an object relative to another object.

The equation for Relative Velocity will be: 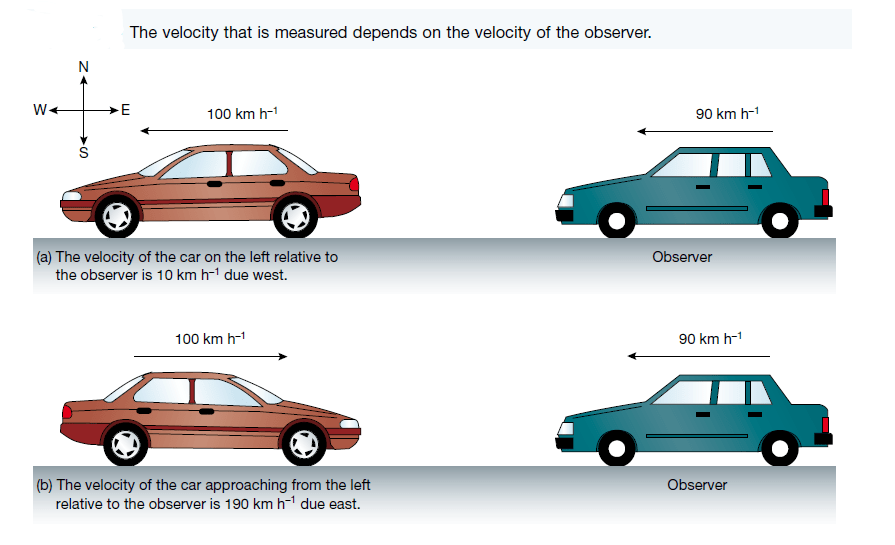 The rule of getting a successful lock with Pulse Doppler radar in War Thunder is that the Relative Velocity needs to be greater than your own speed:

If we create a 2D diagram of the Relative Velocity of a target plane (b) to your plane (a) we will have the following: 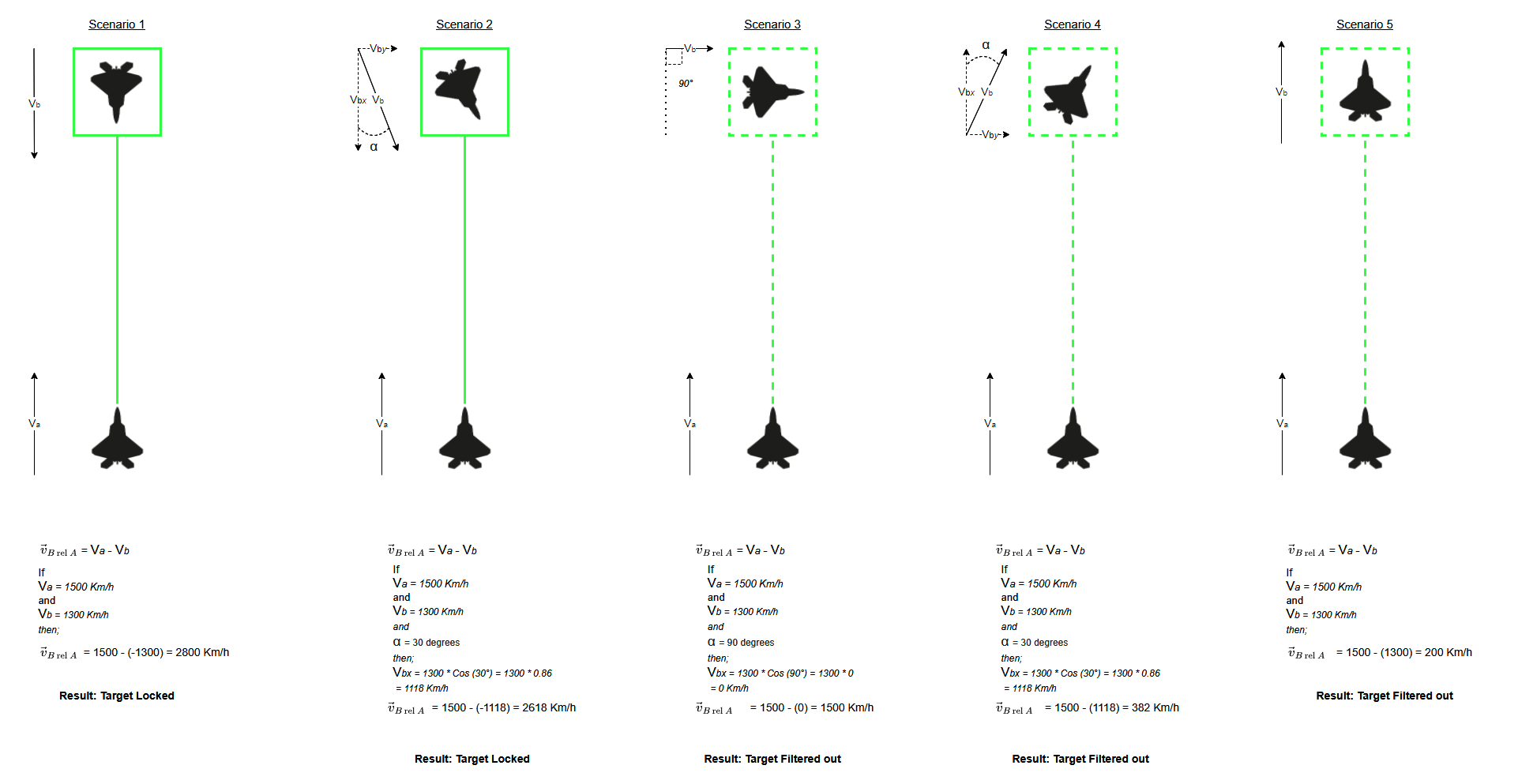 
In the 5 scenarios included above we can see that the successful lock can only be obtained in Scenarios 1 and 2.


In the 3rd Scenario, the target simply has no speed towards your plane which will be treated as a ground clutter, and hence filtered out.

This is called notching.


In the 4th and 5th scenarios, the relative velocity will be less than your own speed, and therefore these will be filtered out.


I am not 100% sure if this is the case in real life, but I am 100% positive that this is how things work currently in War Thunder.


Please be advised that, in the cases of scenarios 4 and 5 you may get a lock if you have a high enough altitude. This needs to be confirmed though.


obviously a 3D mapped situation is much more complex with at least 3 angles to be calculated (x, y and z).

Pulse Doppler Radar – How to counter it

Pretty much the best way to counter such system is to notch it.

meaning reducing your directional velocity to 0.

This can be achieved by the 3rd scenario explained above.


This is the most useful tactic when there is a considerable distance between you and the aggressor.


If the aggressor managed to obtain a lock face on in short distances, you will probably have to dodge the missile.

Any SARH missile in game has a limited manoeuvrability so it can be dodged just like the All-Aspect IR missiles, however it requires much practice and skill.


Please bear in mind that Chaffing will not help you at all.

Currently there are a few bugs and glitches related to Pulse Doppler Radars in War Thunder.

This is all about War Thunder – How the Pulse Doppler Radar Works Tutorial Guide; I hope you enjoy reading the Guide! If you feel like we should add more information or we forget/mistake, please let us know via commenting below, and thanks! See you soon!