This gives simple examples of block and pre-signals and some tips on how to use them.

This guide just covers the basic signals and pre-signals in this game as released in the first EA update. Later introduction of path-signals will allow everybody to avoid the problems shown in this guide in a much easier way.

As long as this isn’t the case I hope these examples help you to get a better understanding of the logic behind these signals. If you don’t want to read the full thing just follow these two simples rules and most of your signaling problems should be gone:

– Always use pre-signals before crossings.
– Always use normal signals at the exits after any crossing.

(in some cases these rules won’t work and this guide will show one example!)

So this is a very basic station with just normal block signals and a train entering it. No problems so far. 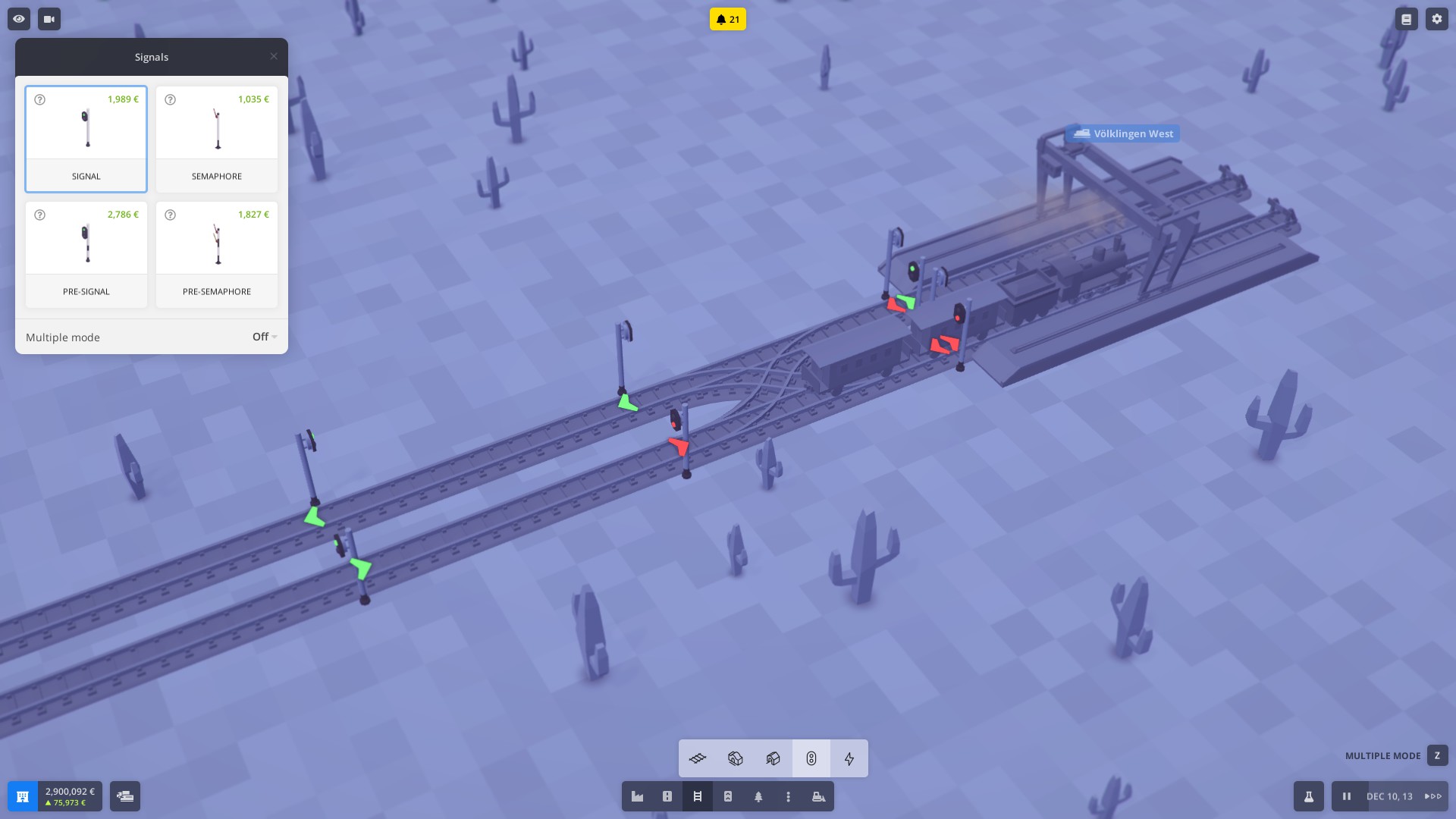 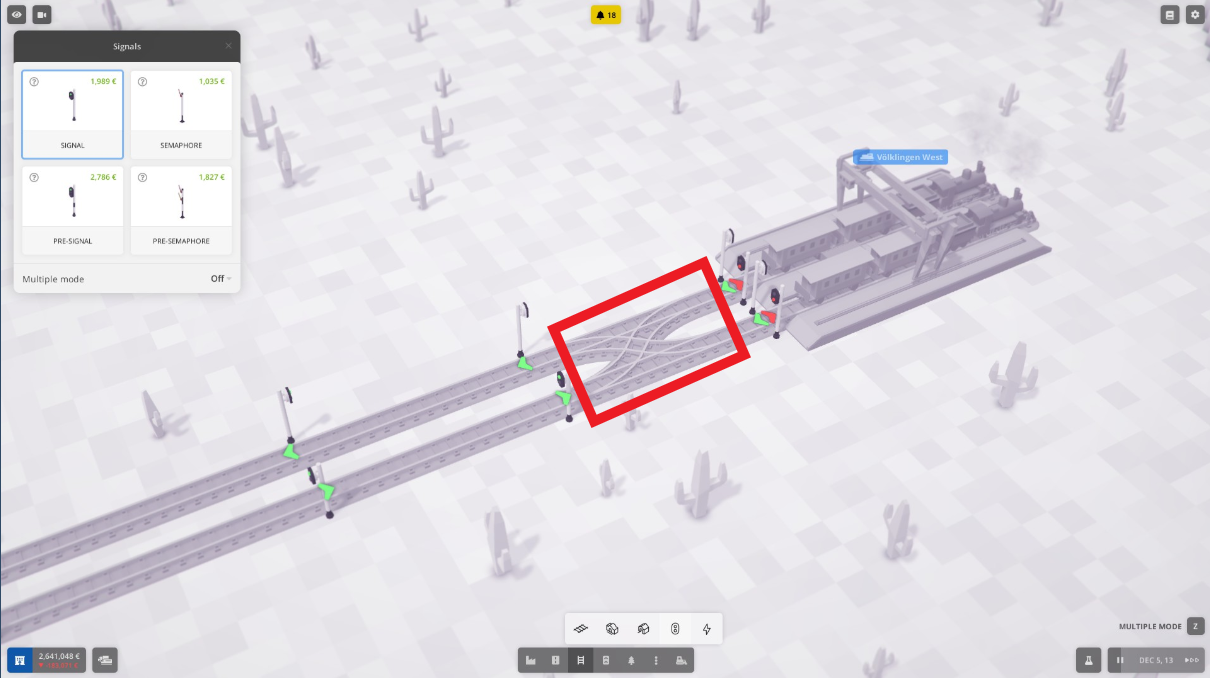 However, if a third train arrives it will enter the free block and just stop at one of the signals in front of the station: 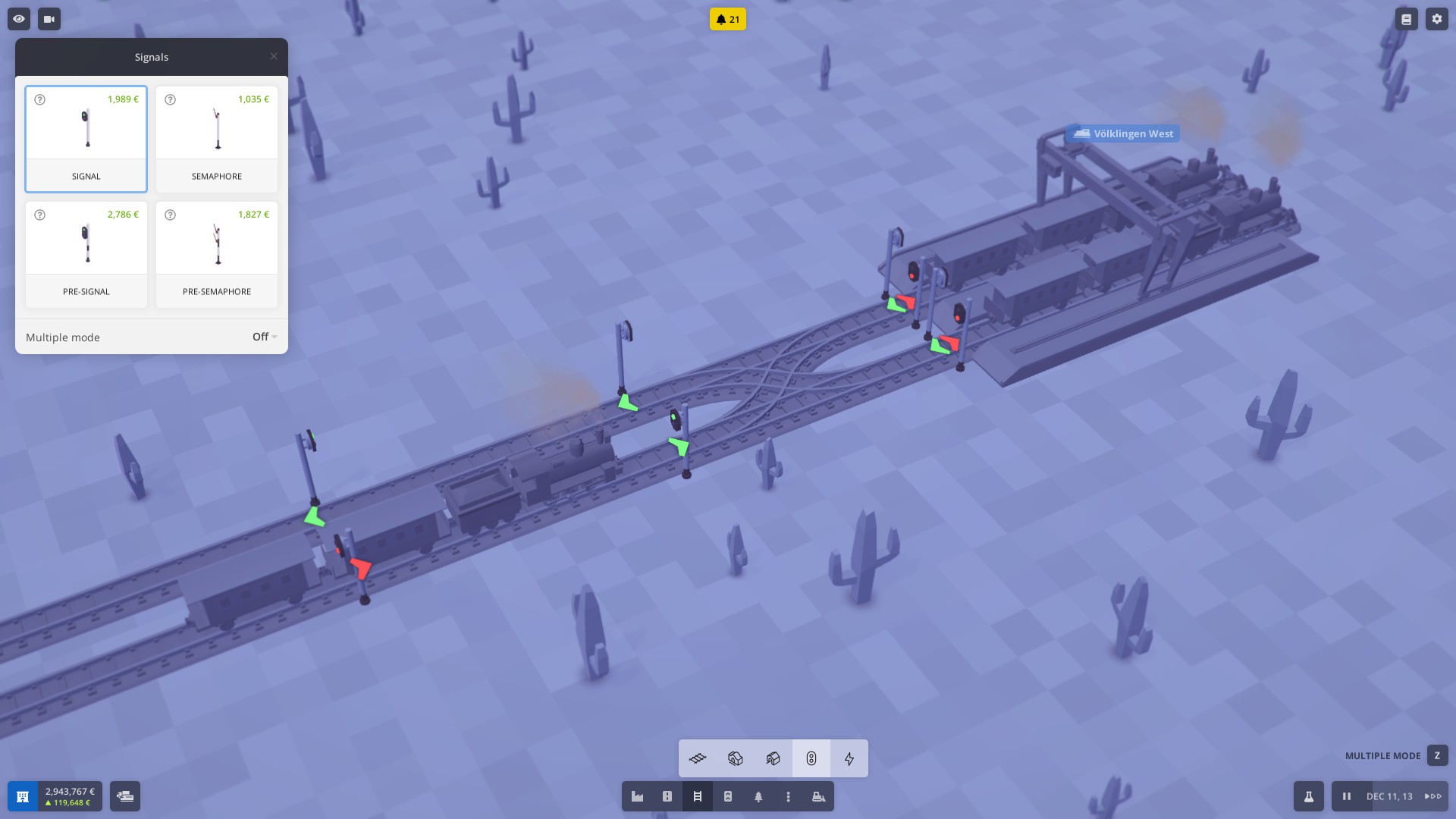 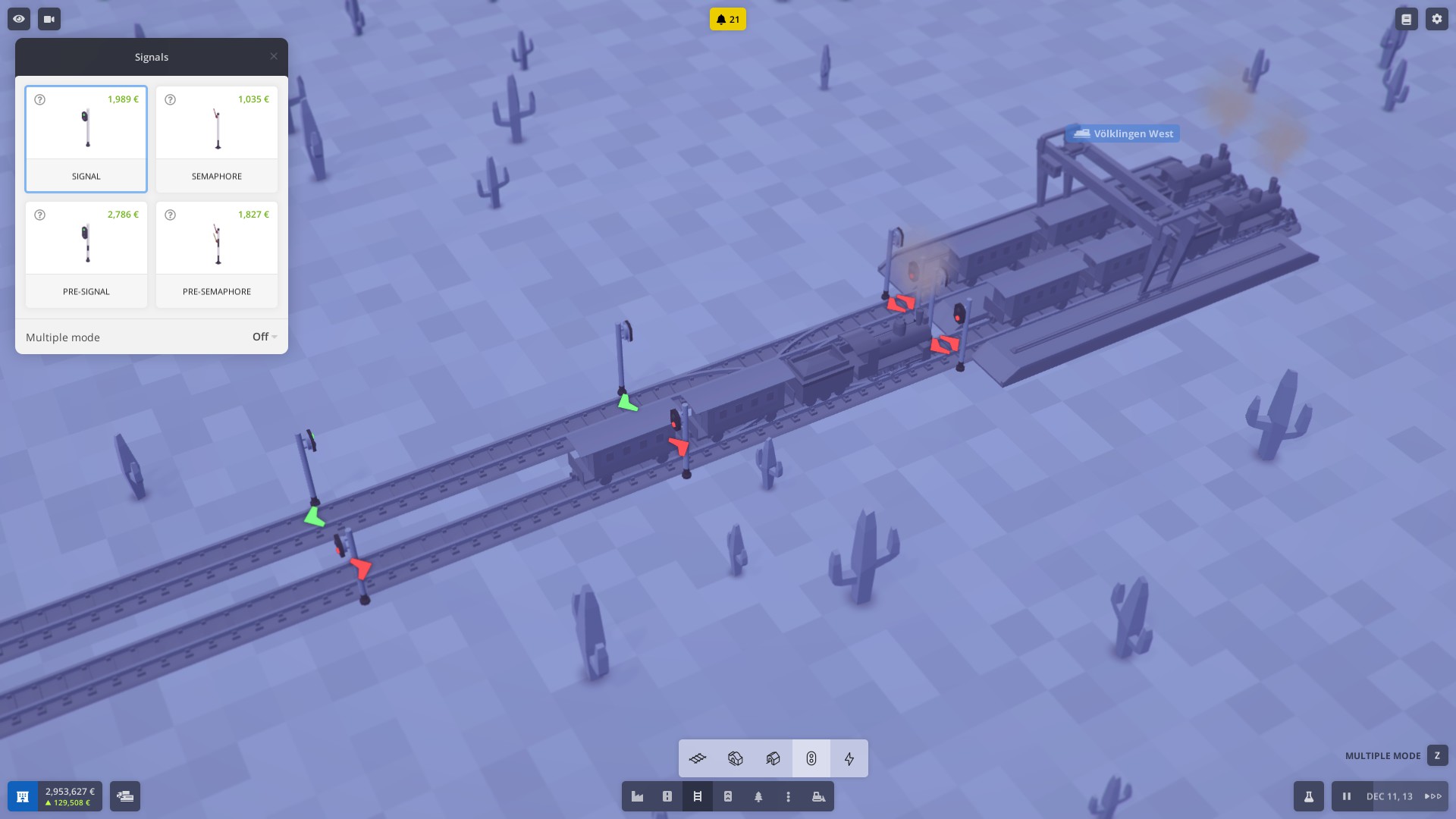 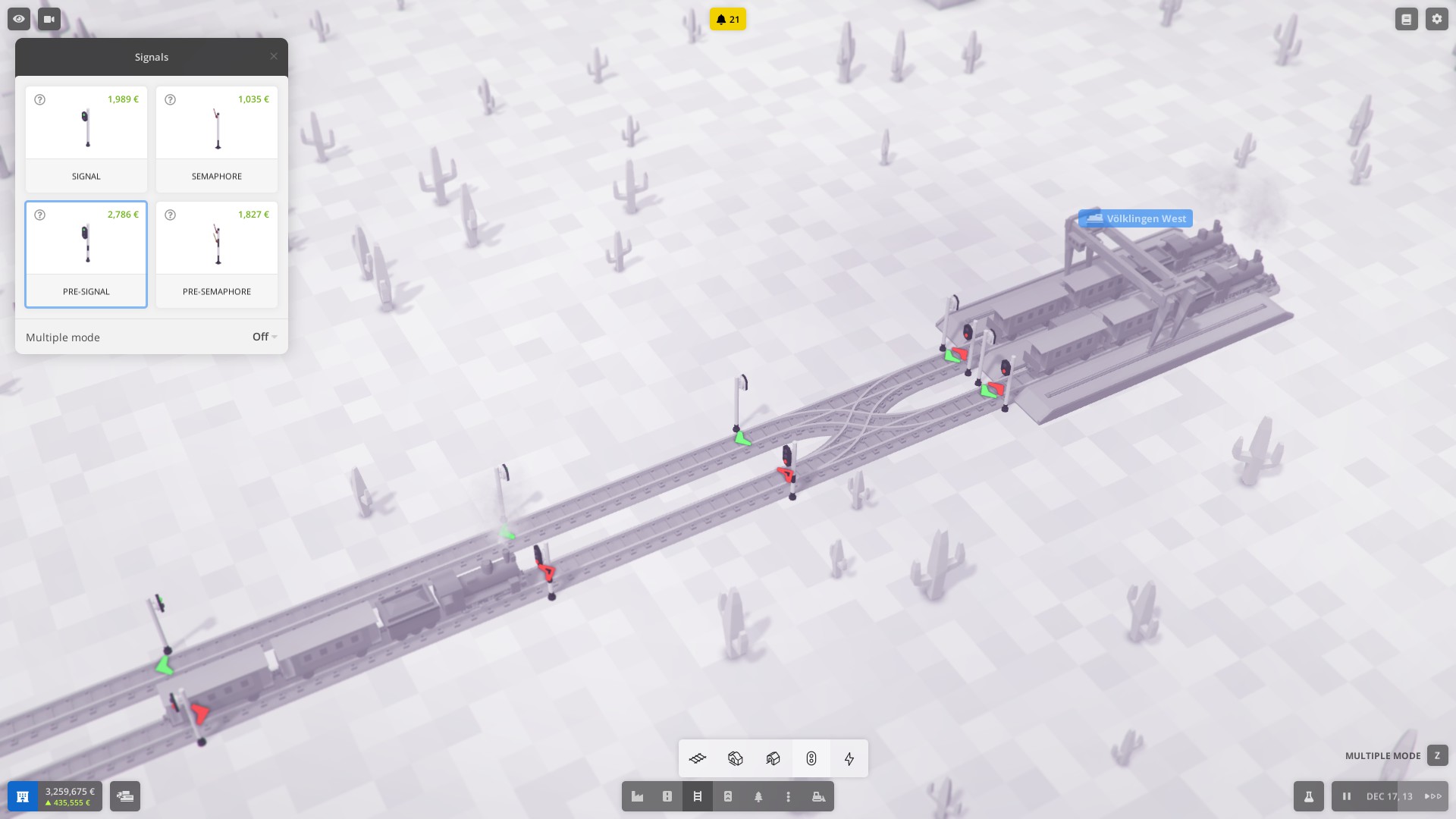 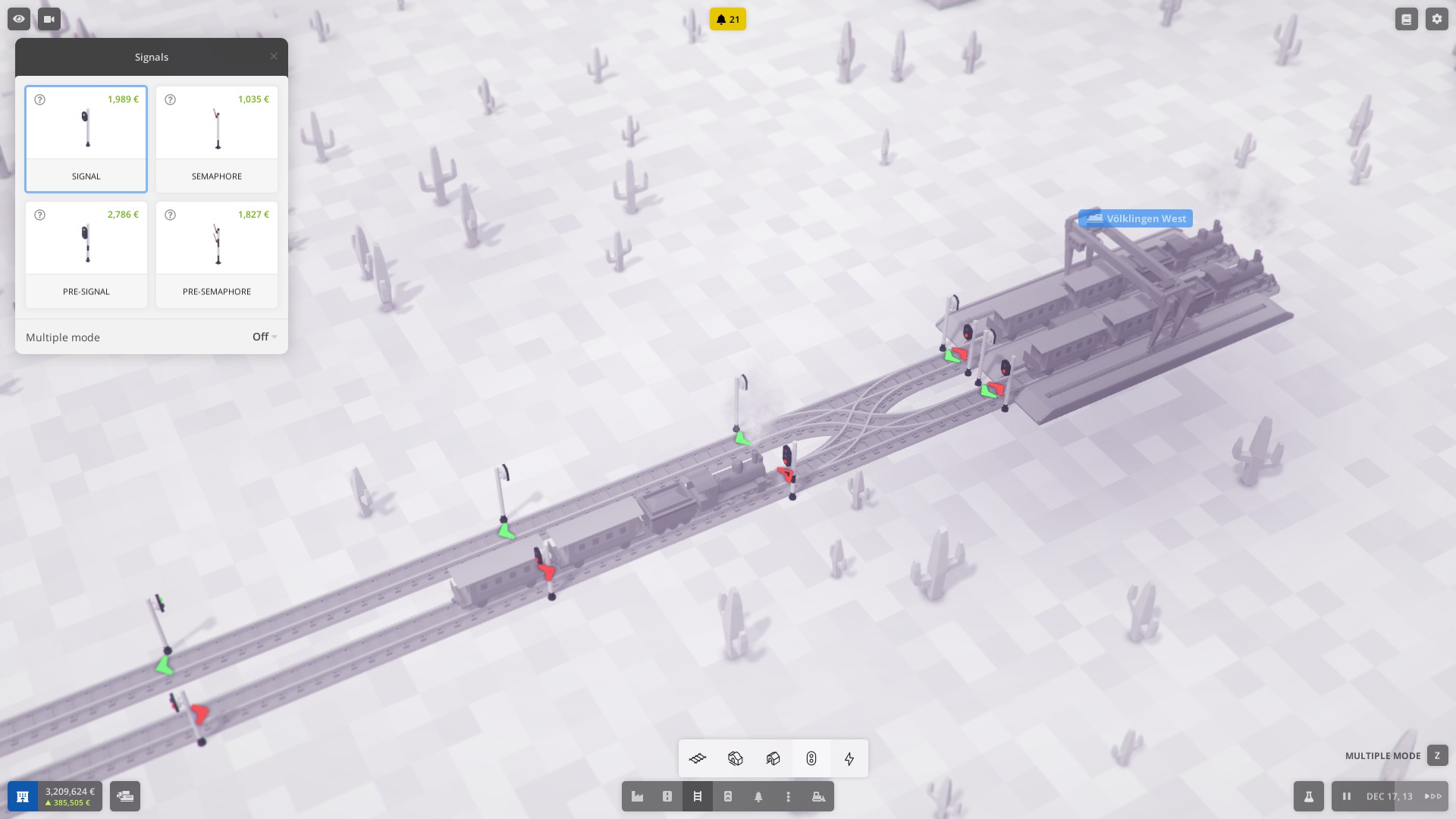 This easy 2 platform station with just one pre-signal will avoid blocking your station entries.

So I saw some people use this kind of crossing and wondering why the train on the upper track can’t go through. There is no train in its way, so why does it stop? Look at the arrows (if you select a signal you get this view!). The train waiting in front of the station is still occupying the block (indicated with the red rectangle). A normal signal checks the whole block, so even if the train inside the block is on the other track, the block is still occupied. 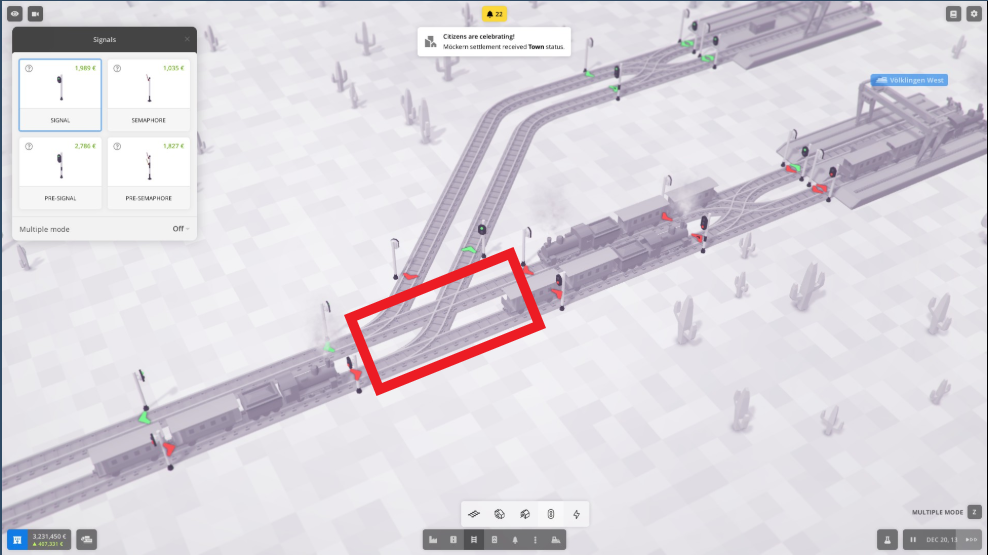 So to prevent this, we need to make sure no train can enter the block before it is 100 % sure that it can leave it, therefore making space for all the other trains. First the easy solution with pre-signals in front of the block and a repositioning of one signal to make sure no train stands inside the block. As you can see the arrow on the signal of the upper track is now green. (note here: One pre-signal is yellow. This is because at least one signal it is “looking at” is green and at least one is red. So depending on where the train wants to go, it will let it through). The train at the yellow signal wants to go to the occupied station, so it will wait and not enter the block. Traffic jam avoided. 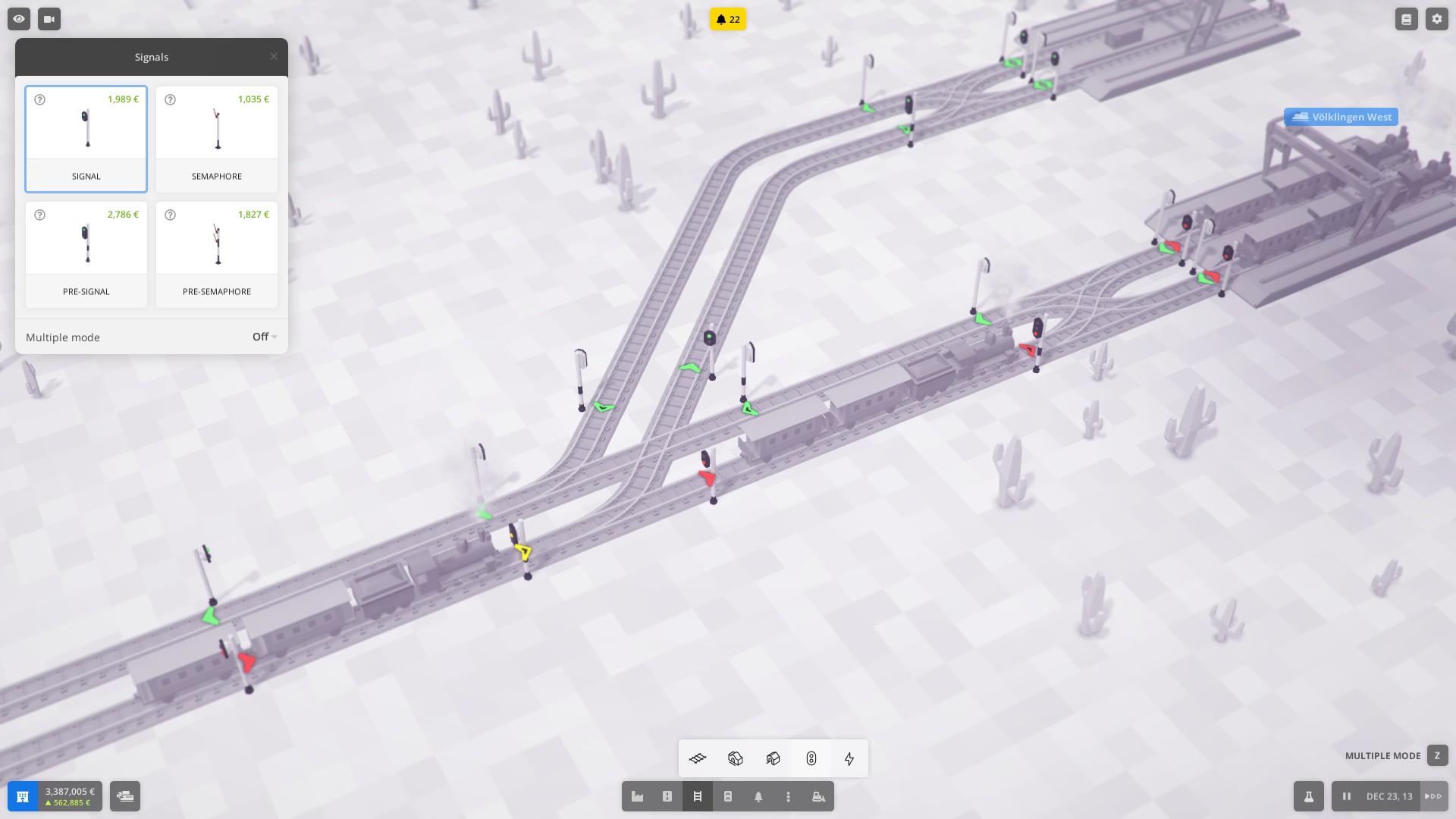 There is also another solution without moving signals. Remember the rules from the intro? Here they won’t solve it, because the train occupying the block would still be there if we don’t move the signal. So this is the solution with pre-signals. Here multiple pre-signals are chained on the lower track. That means they keep “looking” for the next normal signal. If the station is occupied the next train will stop at the first pre-signal in front of the block! 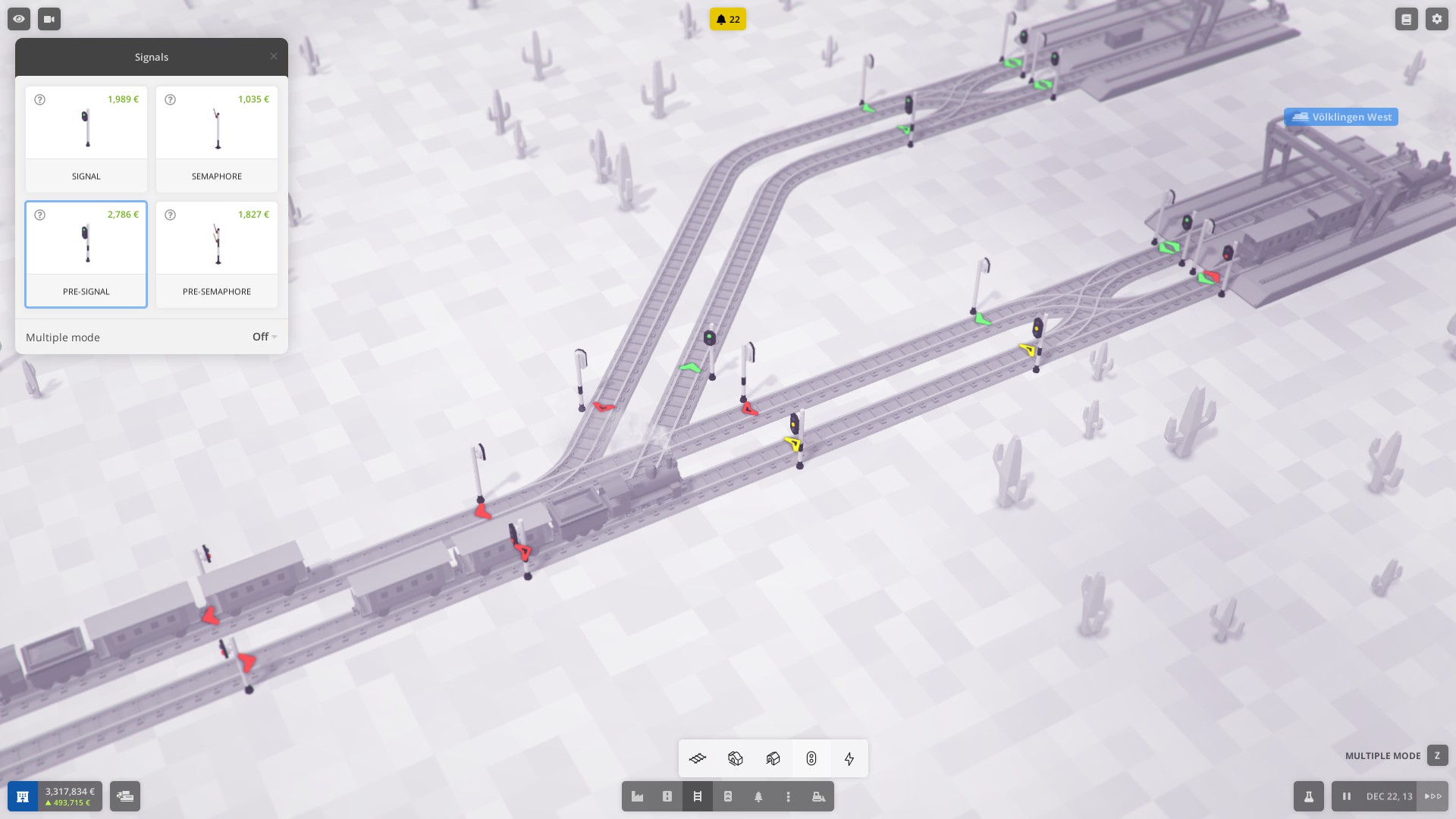 So some of you may find this annoying because only 1 train can pass the block at a time. How to get more throughput? We need more blocks. This works for station entries as well as crossings. For more blocks, we need more space to divide the tracks with more signals as shown below. In this example a train can leave the upper track while another train can enter the lower track of the station. It is not pretty but effective. 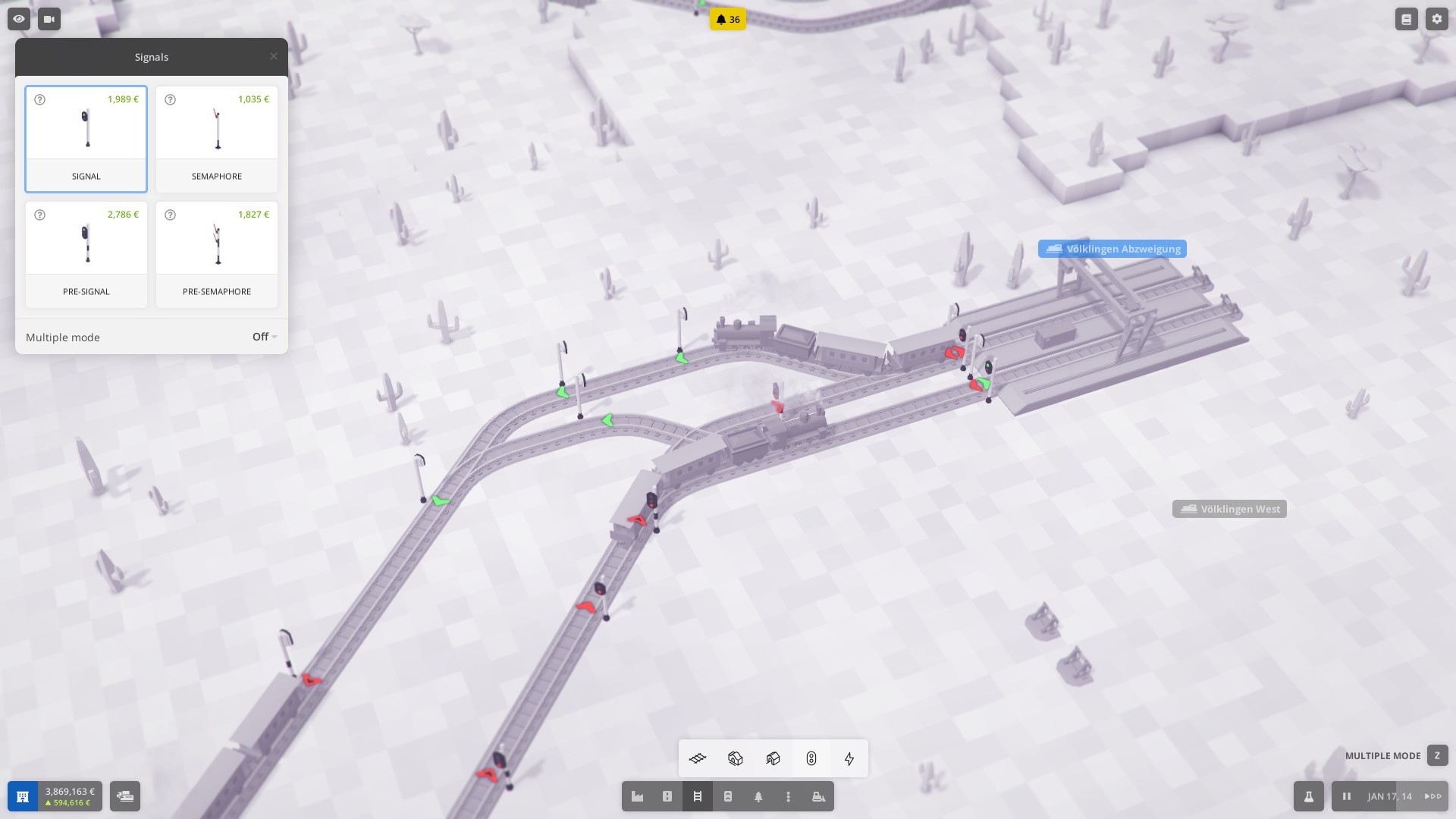 Experiment with this and you will find more solutions and even better setups for your crossings and station entries!

I hope these examples help you understand the logic of the signals better. There are more complex problems out there and also neat solutions for these but this guide will just have the basics. Enjoy!

This is all about Voxel Tycoon – Basic Signals Tips; I hope you enjoy reading the Guide! If you feel like we should add more information or we forget/mistake, please let us know via commenting below, and thanks! See you soon!