To show the more simple concepts of VLANs, overlooked and maybe misconstrued processes for networking, while describing solutions for somewhat specific, but optional problems for server hosting. For the curious/intermediate/advanced users only.

This guide does not show the steps of creating a server, but rather explains through to some inconsistencies/questions for the curious/advanced users. For a guide on how to host a server, go to RooGreave’s guide here – [steamcommunity.com] .


I have been personally playing games via VLAN/VPN (Ex., Hamachi – [vpn.net] , ZeroTier One – [zerotier.com] , Radmin VPN – [radmin-vpn.com] ) for a couple of years, and I thought it would be nice to shed some knowledge on certain subjects, including some networking portions. 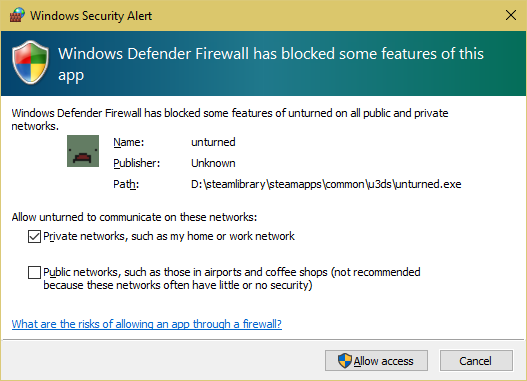 Much of what is necessary of your firewall is to get permission from the game to add a firewall rule to self-host a server, otherwise the software/game is automatically blocked. Whether if your network type is Public or Private, the window above will always default to the one connected to your Wi-Fi/Ethernet. For my case, I set my Ethernet to Private, and it asks for adding a firewall rule to the proper network type for the Unturned Dedicated Server.


Usually it is not necessary to go into Advanced Firewall Settings to set a rule for Inbound & Outbound Rules, since the above window adds the rule for you.


The only exception that needs to be made is probably every 3rd party firewall, where it can be absolutely necessary to add the rule yourself if it does not prompt you once like Windows Firewall does in the above image.

Network Types are the separate rules for a firewall to use on an interface (in other words, your Wi-Fi/Ethernet defines a particular network type for your firewall). These types are Public, Private, and more obscurely… Domain (which, you will not likely be using). 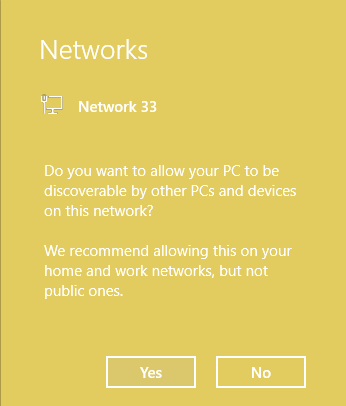 For a VLAN, it is crucial that you match your network type with your Ethernet/Wi-Fi. Some software, like Radmin VPN, seem to be better at doing this, while ZeroTier & Hamachi tends to be more obscure (showing a window similar to the one above).


Checking Yes to the image results ZeroTier, or whatever VLAN/VPN, to Private. If you check No, it will result in your VLAN/VPN being Public.


*Radmin VPN does not require implementing a firewall rule in the same regard, it seems. It does pop up with the above image, like the others. 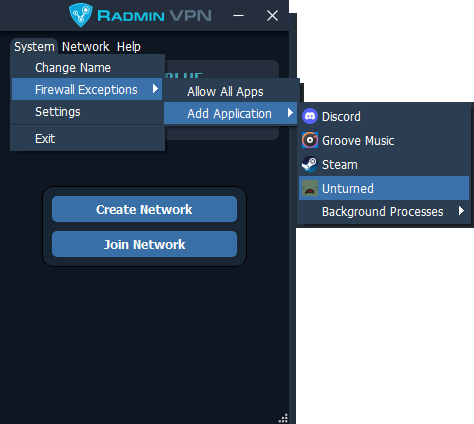 Radmin VPN tends to avoid firewall rules, and uses its own.


To add a firewall exception through Radmin, you have to run the program and add it like the above image. Relatively easier than ZeroTier & Hamachi. However, it still requires your network type to match your Ethernet/Wi-Fi, something you simply cannot avoid.

VLANs (virtual local area network) give gamers an opportunity to play games privately with friends, or the chance to play multiplayer on a dead game with no servers in sight. If your ISP is just as strict as mine is about Port Forwarding, this is basically an alternative to it.


Think of a VLAN as a personal router floating in the internet. Usually the other software, like Radmin VPN and Hamachi, are specifically VPN.

Have you ever played with someone on the same router, whether it be Unturned or Minecraft, and when someone opened up LAN, it automatically showed up? That usually has to do with something called Broadcast Packets. Via VLAN, this method of connection normally is not possible, since Radmin VPN, ZeroTier One, or Hamachi take the form of a secondary interface (while your primary is your Ethernet/WiFi). This is a Windows problem, but luckily, a program called WinIPBroadcast – [github.com]  is around to fix it, allowing multiple interfaces to use broadcast packets. Every friend/client (excluding yourself if you are the host) must download this if you want to connect by simply going to the LAN menu.


Sometimes, you would not need to download this, depending on the VLAN you chose. It has worked well for me for a long time, especially for a game like Tom Clancy’s Rainbow Six Vegas (bare in mind… I personally use ZeroTier). To even join a lobby, you have to rely on Broadcast Packets, since direct connect did not exist for that game alone, unlike Unturned, where you can connect via IP, or your Favorites section.


*Radmin VPN DOES NOT require WinIPBroadcast, only Hamachi & ZeroTier One do.

Why Was This Made?

Even though this does not seem affiliated to Unturned in anyway, it is… to some degree. Sorry if this seems uninteresting, or irrelevant, it is mostly geared towards those who want to understand the, what I personally call, misconstrued portions of networking/firewall, as simple/complex as it may be to others.


Maybe this cleared up your connectivity problems, or was remotely insightful in some way? Regardless, if you made it this far… thanks for reading. Happy hosting!

I hope you enjoy the Guide we share about Unturned – Server Information Tips – Network Types + VLANs/VPNs; if you think we forget to add or we should add more information, please let us know via commenting below! See you soon!