Hi! This guide was originally created by _MifiX_ – [steamcommunity.com]  I am just humbly translating it. All credits goes to _MifiX_ by all the effort, content and the amazing job; and of course all my thanks too by allow me to translate it.

Hello! Today, frankly, I don’t fu*cking want to do something, so I will write all this tomorrow.

All right, I woke up so let’s start!, today I will show you and tell you how to get all the achievements in one great game called “Trailmakers”. First of all, this is a sandbox game and it speaks for itself! There is a plot in the game, but it show by itself and it is just a introduction to the game and the final animation, there is not much to talk about it. The essence of the game is in the construction of various vehicles with mechanisms, and is beautiful!

There are 22 achievements in the game

To complete them all you will need to spend from 10 to 20 hours of your life (depending on the skill) be careful, no one will return them to you

Difficulty of achievements: 3/10 except for a few which have difficulty 5/10

All achievements in this section can be obtained by going foolishly through the whole campaign of the game.

Pick up a piece of Salvage with the magnet

This is a fairly simple achievement, I’m sure that if you haven’t received it yet, then most likely you are watching this guide right after installing the game, but just in case, I’ll explain: During the game, right after getting the underwater engine and air tanks for swimming on the water, build an amphibious vehicle and sail to the nearest big island 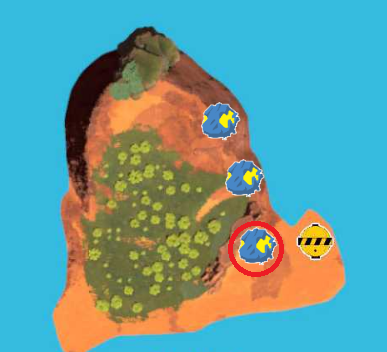 As soon as you get it, you will be credited with the achievement.

This achievement is absolutely not difficult, you get it just by going through the campaign

The things turns more difficult here, you need to fly into the throat of the volcano, to the very bottom of the lava world, straight to hell for a visit 🙂 There, in addition to the achievement, a cool jet engine will be waiting for you.

But be careful and don’t rush this achievement at all, you will need to have vertical thrusters with you at the very least. Good luck!

Complete the Stranded in Space campaign and you will win this achievement, there is not mucho to add really, all the info about this achievement is in the game: the necessary parts, the number of power units, even the assembly instructions are there.

To complete the next 3 achievements, you need to enter the next mode in the game menu called: “Trailmakers Rally”, it is important to understand that there are more races in addition to those that give the achievements, and in any case you will need to pass them, it’s not important how (with gold, silver or bronze). Let’s just say that this is a prerequisite to open the missions you need. However I recommend going through more missions, not only in dull bronze, but silver and gold too, due they give more coins, as well as give more coins re-passing races. You will need coins to buy modules (engines, wheels, ramps, wings and so on), and of course to open new races.

Get gold on Downhill Rush

And so, most importantly, the name of the race is “Downhill Rush”, it is in the description of the achievement (both in this and in subsequent ones), so despite the “especially cool people who always understand everything”, it was necessary clarify it .

In fact, that’s all I can say about racing, due there are not such walkthrough guides, you will need your skills in Need for Speed: Most Wanted Black Edition (There used to be a cool picture from the game here), and quite a lot of luck (Seriously, ten times at the same moment and exactly the same spot, I stumbled 9 times and turned me around and on the 10th time it blew, it’s the same s**t as in “Poly Bridge”, I built a bridge, drove 10 times and everything is fine but on the 11th time the car get f**king stuck and everything get broken), except that I can recommend specifically in this race to put a non-medium engine (this is a big colossus 2/3/8 blocks in size, which has a weak acceleration but has a high maximum speed), and 2 light jet engines with 1 power unit each, so you will have fast acceleration and the same maximum speed.

Get gold on Sunny Slide

To Fly or Not To Fly

Get gold on Cliff Land

Without deviating far from the topic of racing, let’s move to the next location in the game menu, as you might have guessed the name of this area is “Racing Island”

And so let’s start with something simple

Crash into the blimp on Race Island 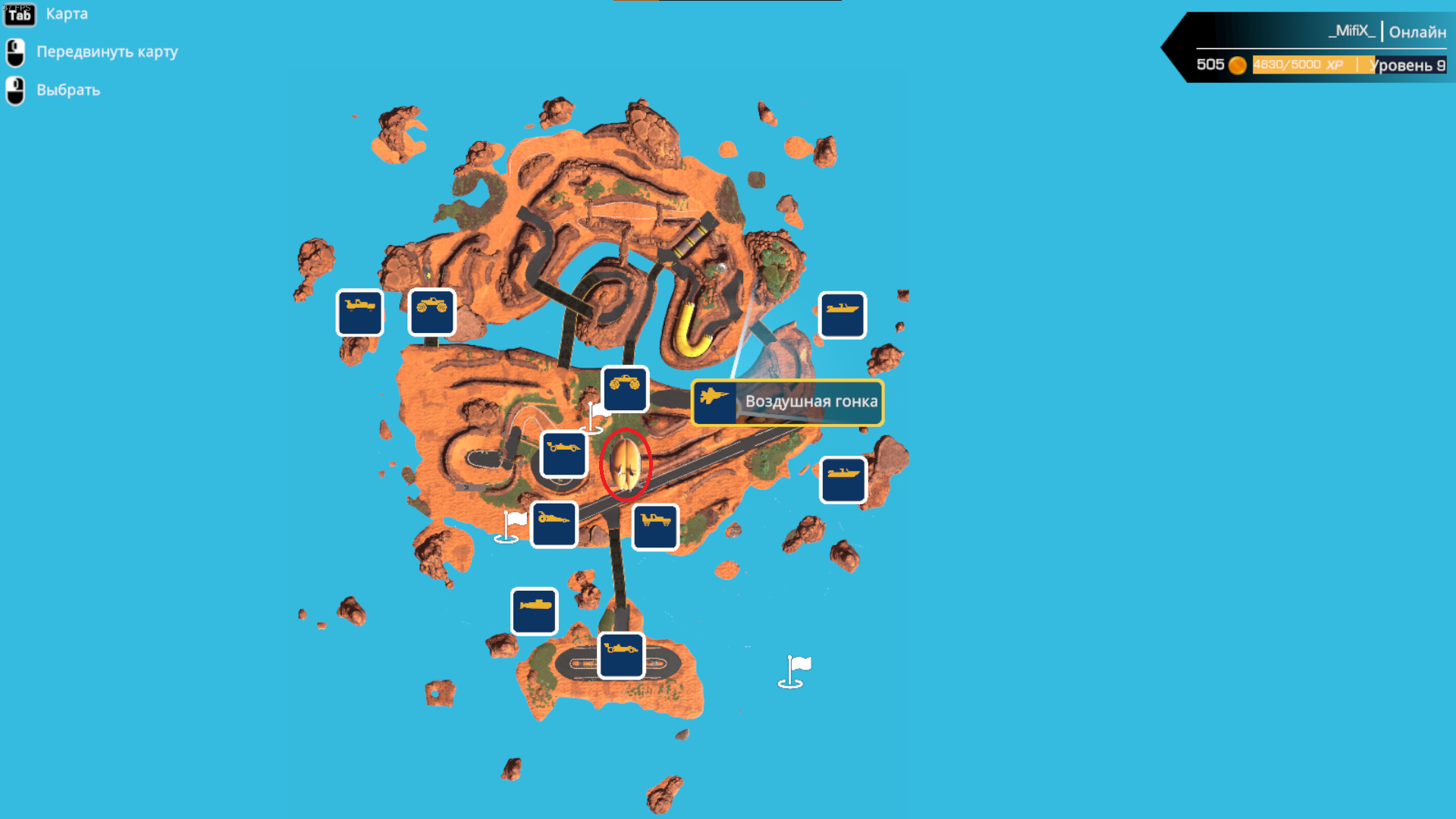 See this huge cheburek circled in red? Get into it with all your might!

Land on the lighthouse on Race Island 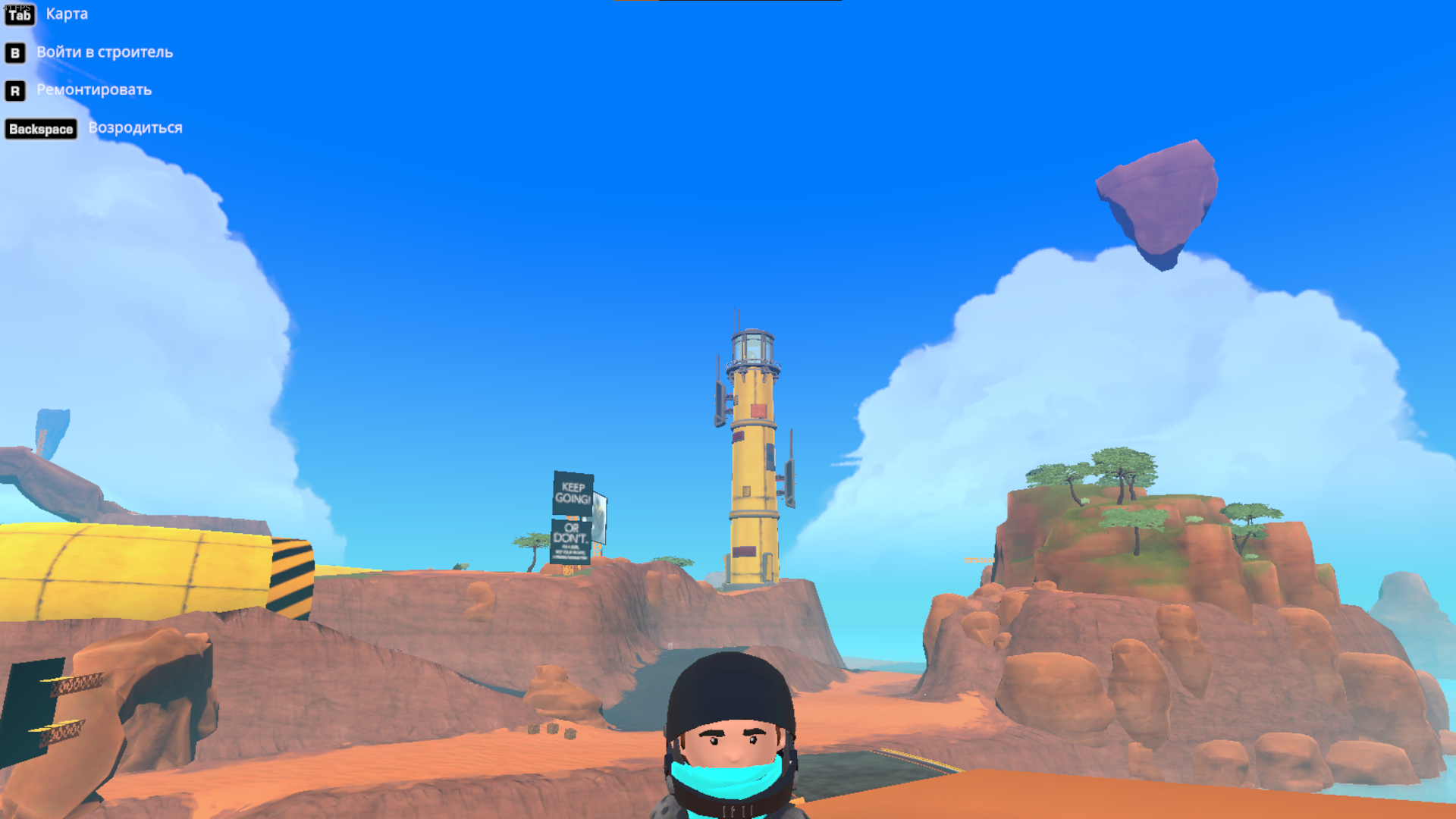 Do you see the lighthouse? I don’t see it, but it’s there!

There are 6 such islands on the map, here are the screenshots of all of them: 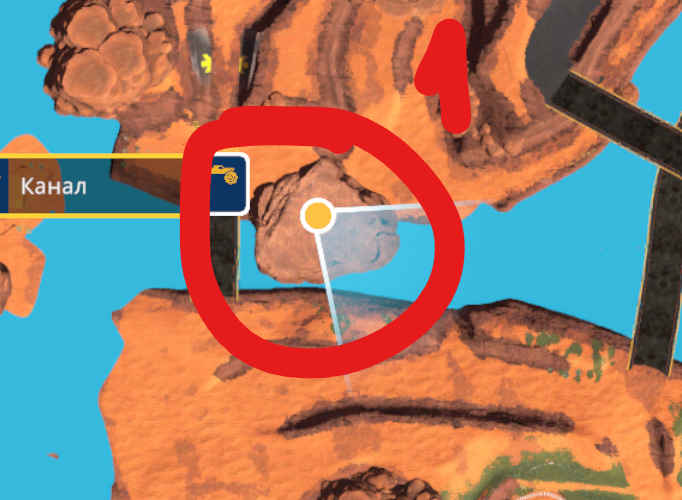 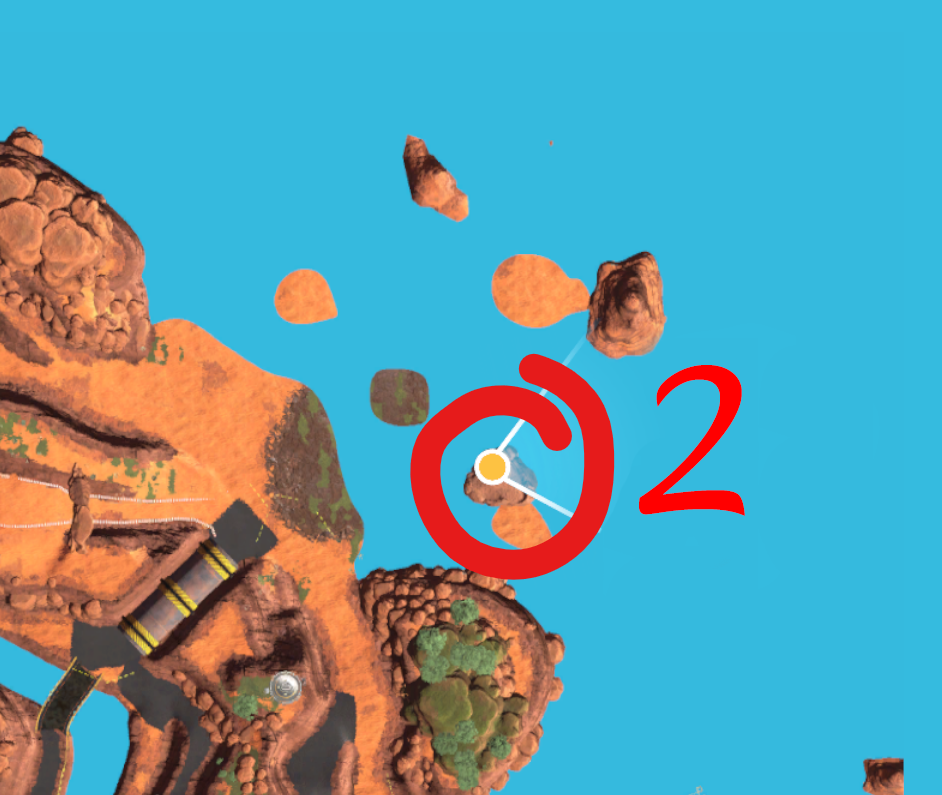 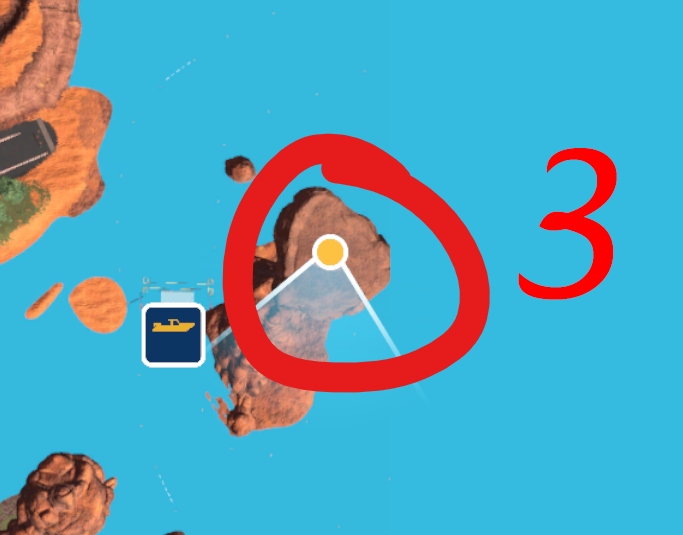 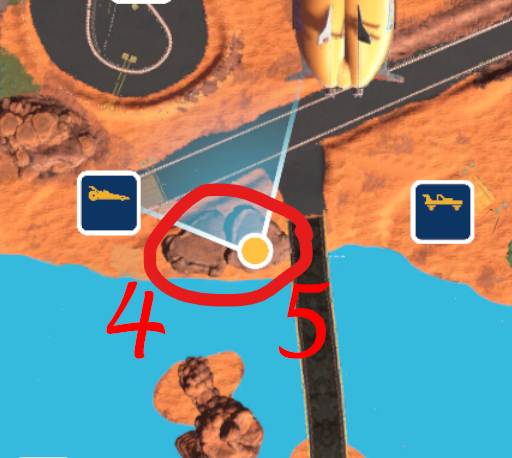 Let’s keep the pace, it’s clear where you need to go to complete the following achievements.

Reach the top of Danger Island 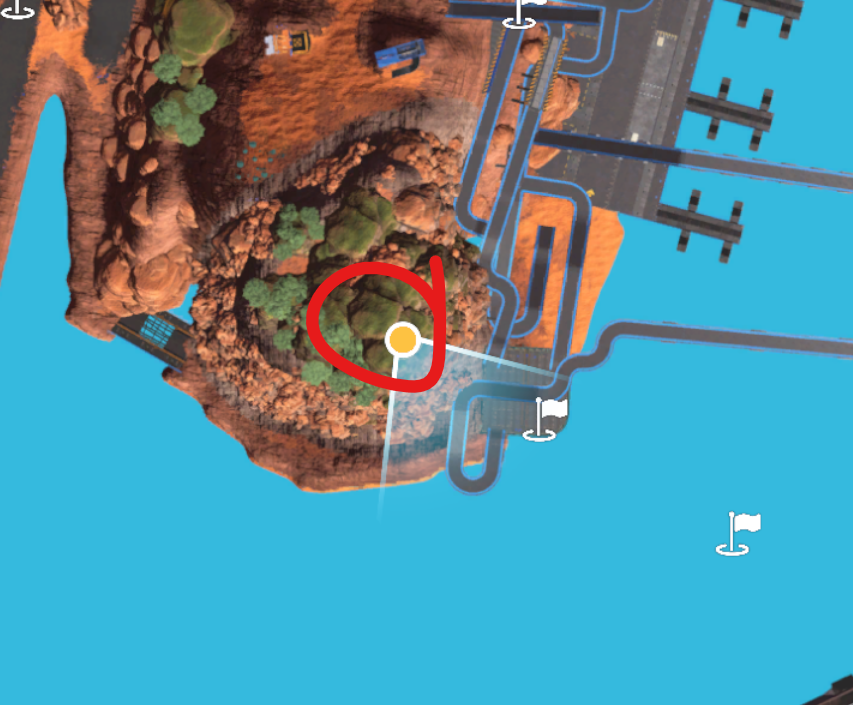 It’s simple, climb into the marked place on the map, no matter with what or how, the main thing is to land there and the achievement is yours. 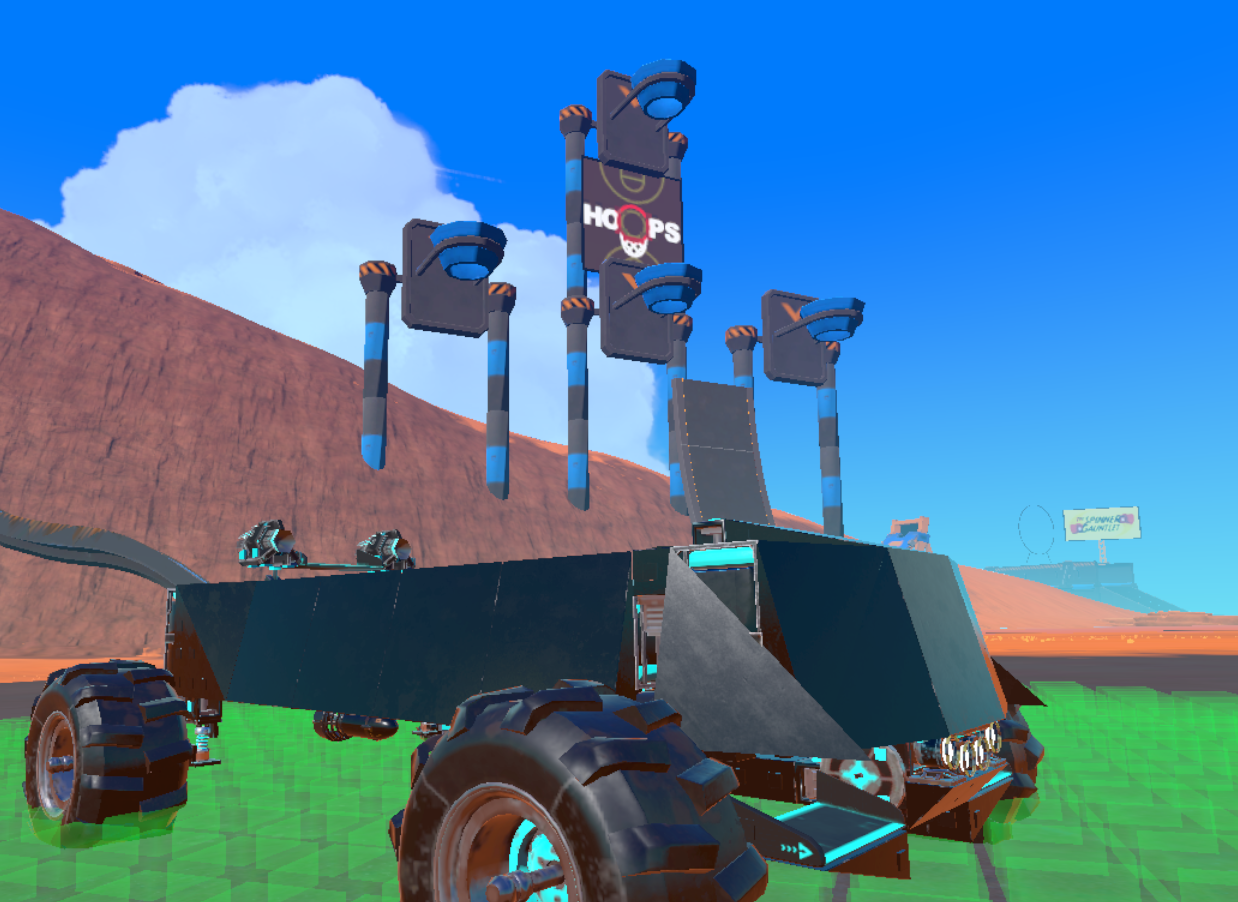 There are 2 ways to choose from: as a mad top-down pilot or a stuntman accelerating through the ramp

Fly through all the rings of fire in one session

I just recommend finding an aircraft with sensors in the workshop so that it can hover in the air and fly carefully through all the rings, I went through this and I advise everyone, at the same time you will be credited with another achievement for downloading cars from the steam workshop, but more on that later.

Complete all the ball puzzles on Treasure Island in one session

All puzzles will be marked on your map with a yellow ball, your task is to solve everything without leaving the game menu. Good luck))))))))

Visit the monument on Sandbox Island 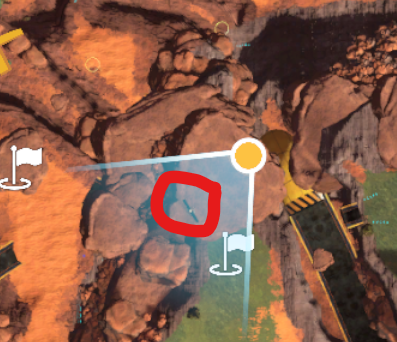 The island with the monument is high on the island, follow the screenshots. 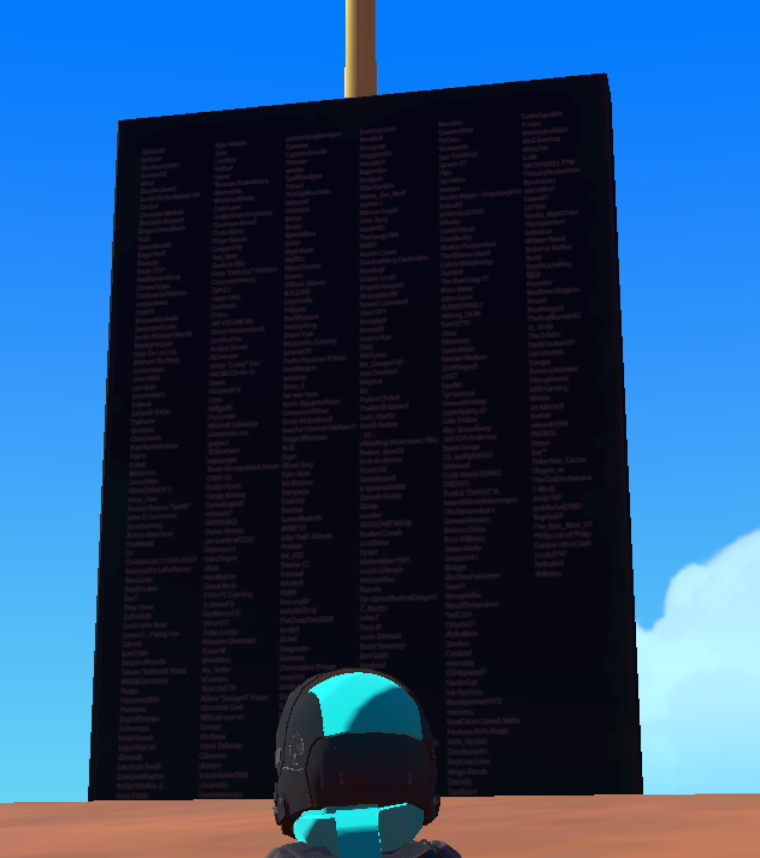 Bump into the whales

A pod of whales swims around the island in a clockwise direction, so you could to swim against it in order to crash into the whales. 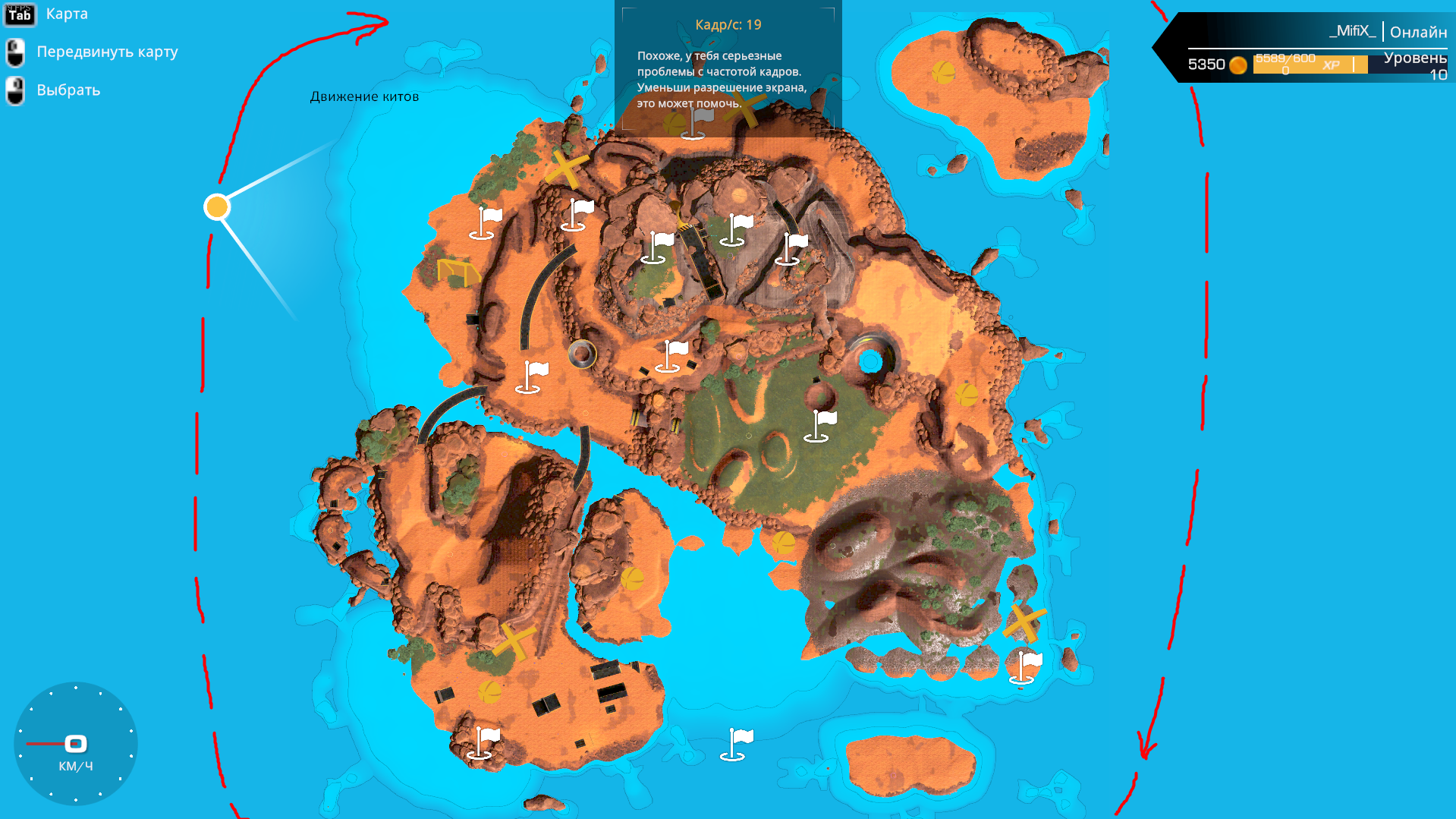 On the screenshot, I noted the approximate distance from the island to the whales, and also showed the direction in which the whales swim, the flock swims in this direction only. 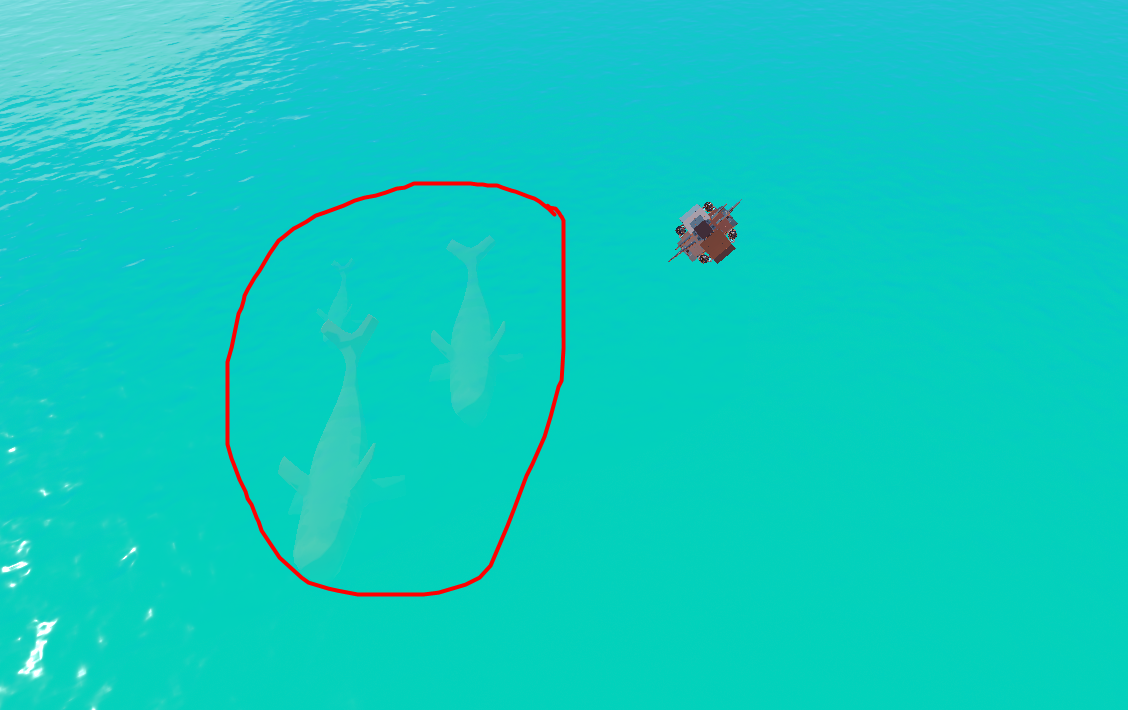 Difficulties can arise when finding them, because whales are a bit difficult to spot both from the air and under water if you are far from them. 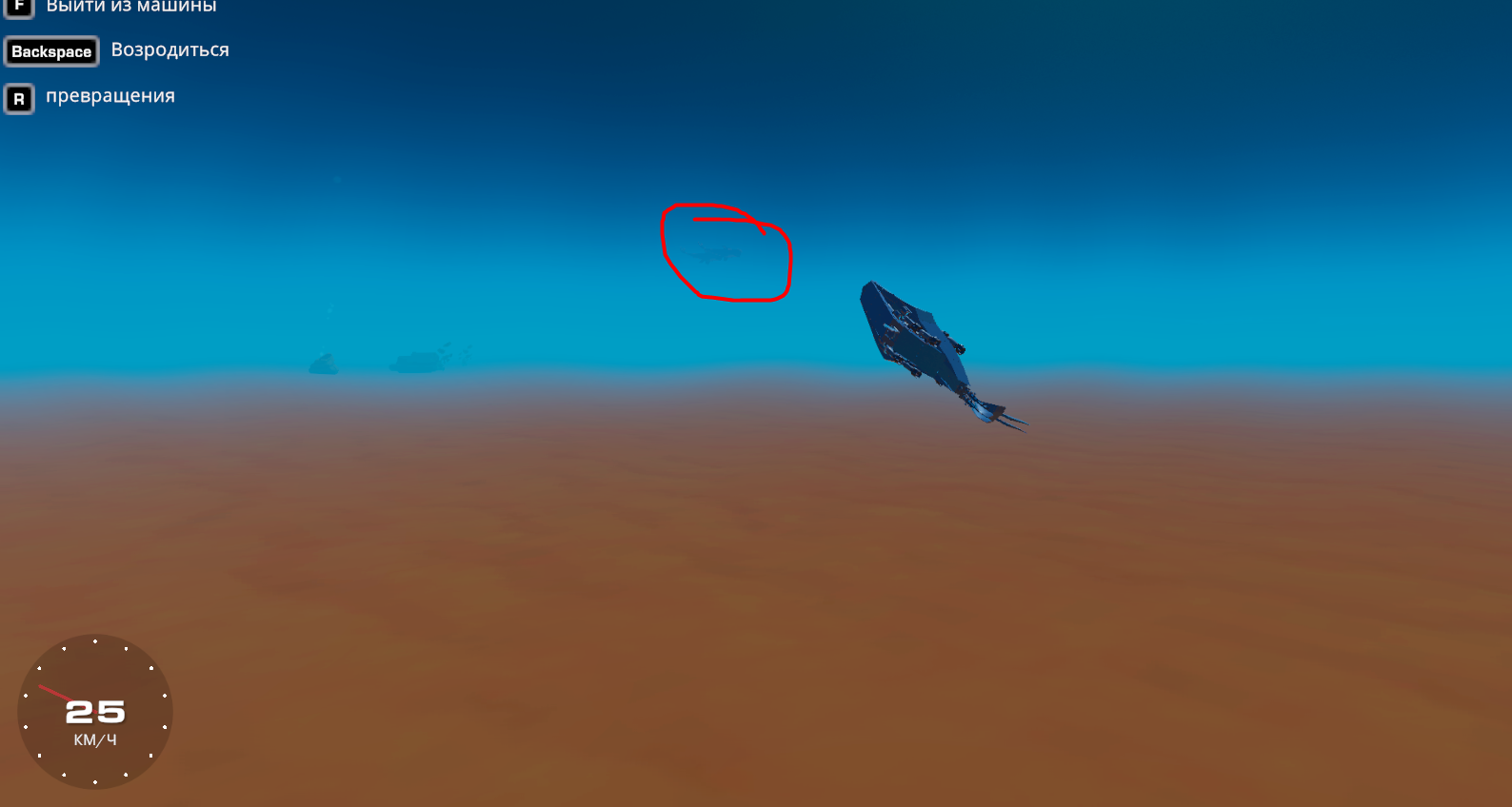 It is important to note that only one flock swims, so you could be looking for it by a long time, but if you know the mechanics you will be ok.

Drive over 8 chickens on Treasure Island in one session 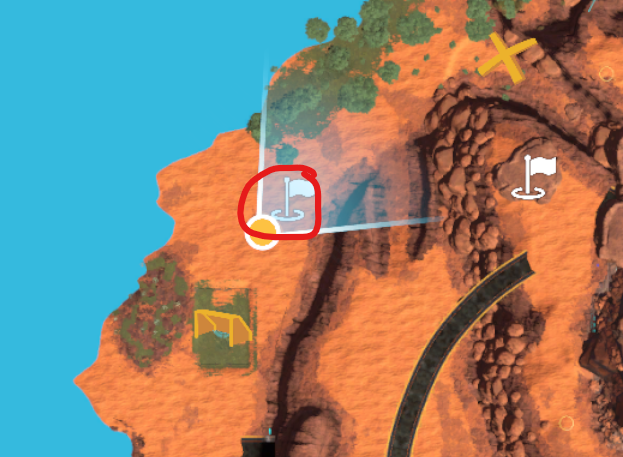 Go ahead, kill them all, I know you won’t stop at 8 chickens, freaking killer!

Hug the Tree on the Northeastern Island in Sandbox 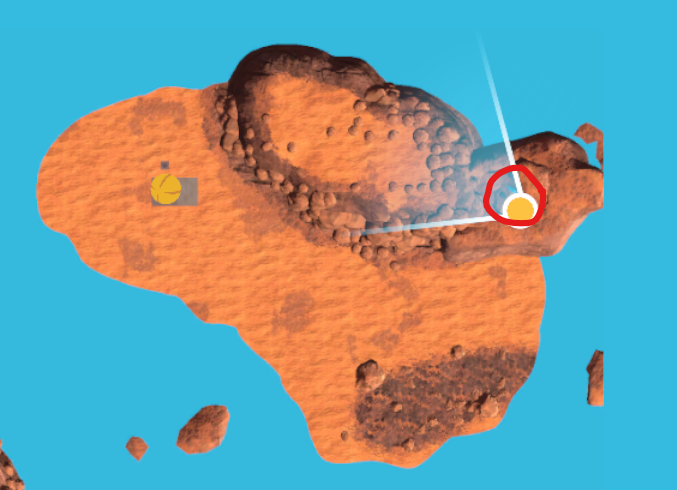 On the island, in the marked place, there is a hole in which the treasured tree is located. 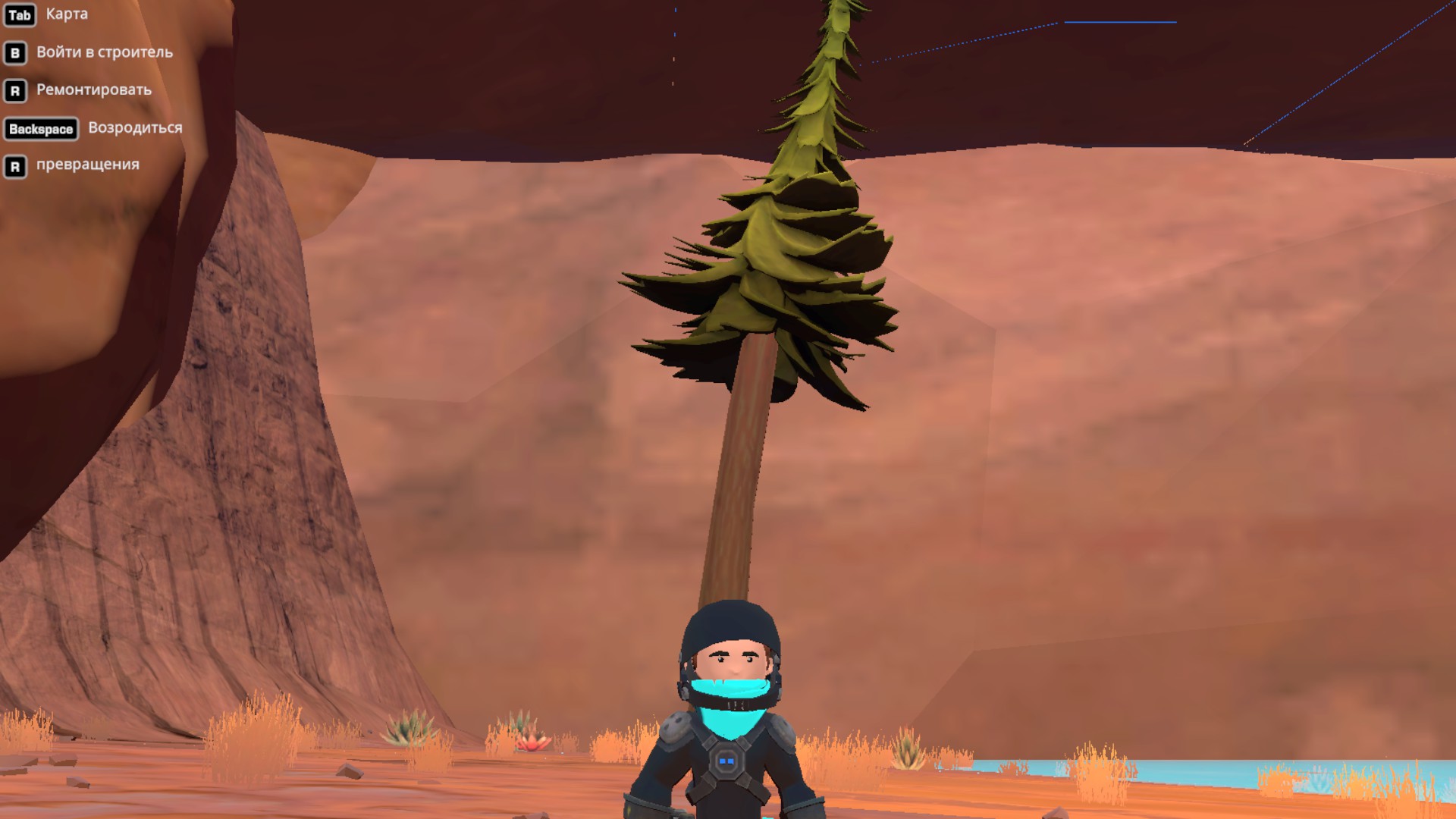 You need a character to come close to the tree (I just didn’t try it with a car) and the achievement is yours.

This achievement is cooler than all the others from the game!

I tried to upload the project to the workshop, but the game does not allow me to do this for some reason, so you need to build a device capable of accelerating to such a speed with your own.

Stay airborne in a zero Power Core vehicle for 60 seconds

The recipe is simple: Climb as high as you can > Build something without power units (preferably with wings so that you can correct in flight, take a cue from a hang glider) > Jump and fly for 1 minute without touching obstacles > Ready!

Download and load in a vehicle from the Workshop

I think everything is very clear here, so I don’t draw attention, besides, I’m sure that you have already received this achievement with a probability of 94.8%

Upload a vehicle to the Workshop

In principle, everything and what is need to be done is also clear here, but someone will love the answer to the question: “What, and how, and where?” Well, this is for you:

1. Create any garbage that comes into your head, hold down the left mouse button, select your entire project, click on the symbol indicated in the screenshot. 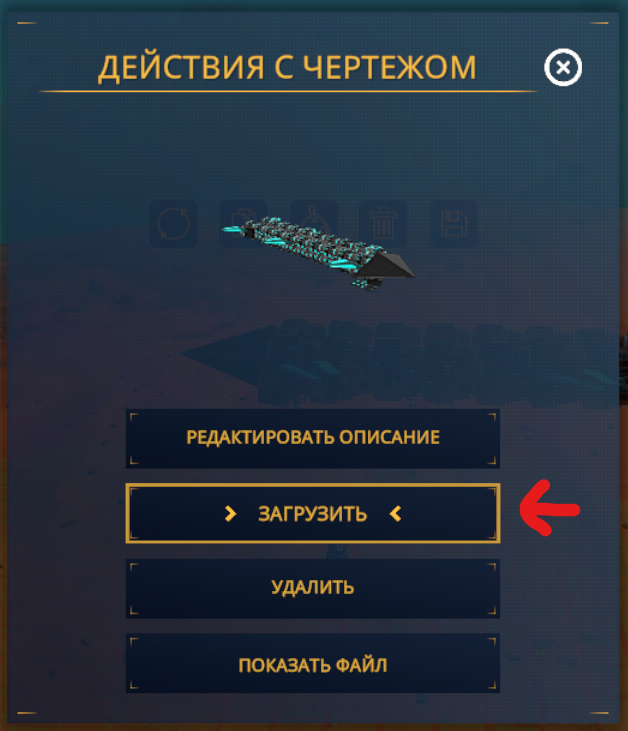 2. In the bottom list of all your projects, select the one you need and right-click, then follow the screenshot. 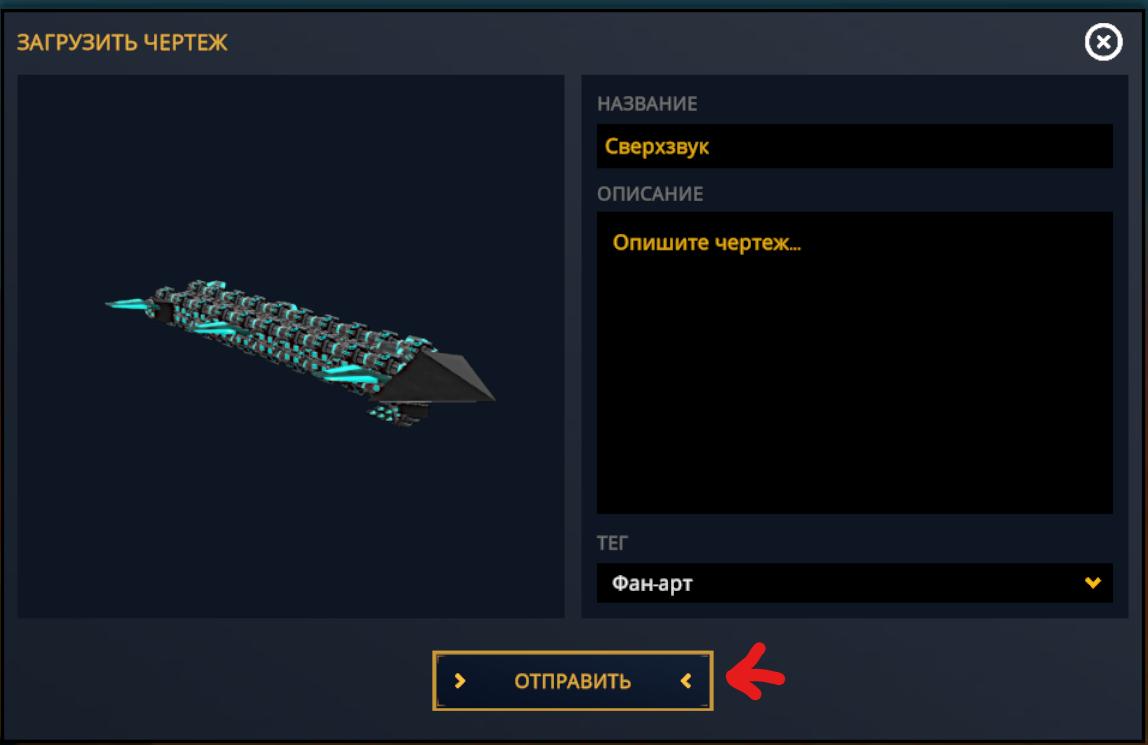 There is even no need to comment on anything, everything is already clear what to do next.

Well, that’s all, after three nights, heaps of text and scribbling, all sorts of screenshots, I finished this guide. I won’t lie, I’m tired, but I am very happy that I finished it, so I’ll be glad if this article helped you. I also need to say that I am writing a guide for the first time, and all sorts of details simply cannot be avoided, but of course, I am open to criticism and will try to correct the shortcomings. Throw friend invites if you want, maybe we’ll play something together! And on this I will finish already, Good duck!

I hope you enjoy the Guide we share about Trailmakers – Obtaining All Achievement Guide; if you think we forget to add or we should add more information, please let us know via commenting below! See you soon!