After completing both Total War: Warhammer I and II and all its achievements, I decided to create this guide for the final game in the trilogy. Don’t forget to rate if you enjoy the guide, and comment if you have any feedback or tips.

The guide has been split up into different categories for all the achievements, spoiler-free. Use CTRL + F to search for achievements if you have a hard time finding a specific one. Note that more achievements will be added in future updates. 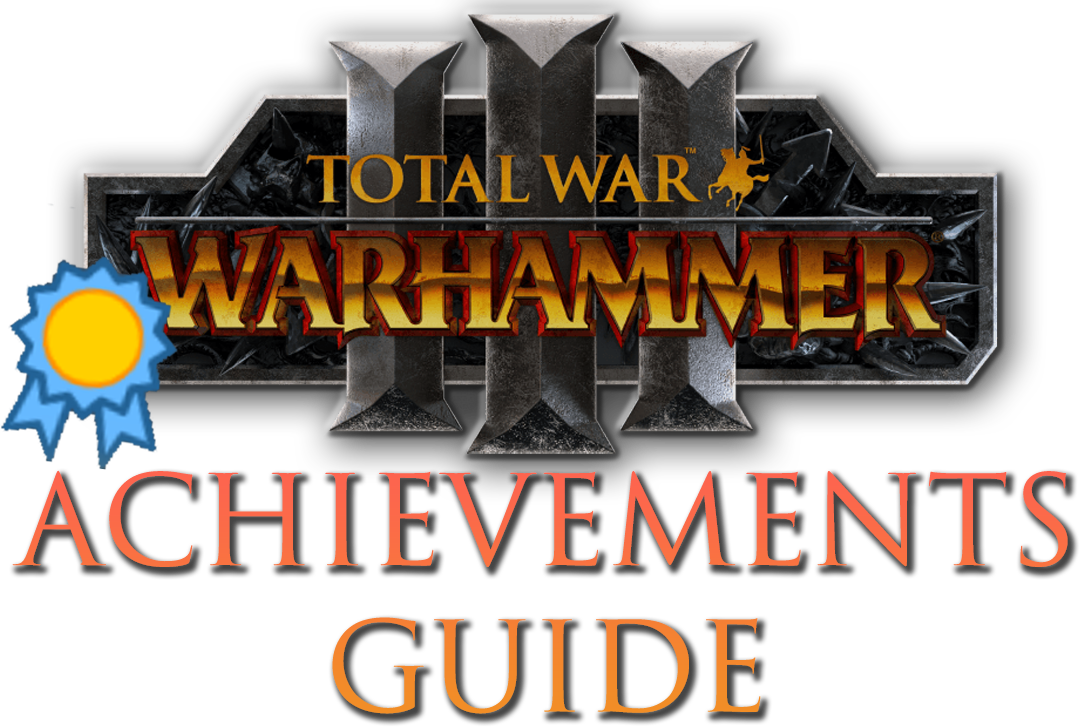 The hardest difficulty in the game, no saving is allowed besides autosaves. You do not need to set battle difficulty to Legendary, it can be whatever. I wouldn’t rush this achievement as there will be plenty of content updates in the future which will most likely encourage you to replay a faction, which is a good opportunity to try and get this.

Tear Down the Walls

Raze 30 settlements during a single campaign.

As of now, I do not know which faction is the best at attaining a lot of income. Comment if you have any tips.

Enter the Realm of Chaos using a Rift.

Have a military alliance with 5 other factions at the same time.

Have a military alliance with 10 other factions at the same time.

This used to be quite easy in previous titles when factions would gain the Shield of Civilization trait due to Archaon the Everchosen spawning. It’s possible once combined map for WH3 is released this trait will return.

Have a trade agreement with 5 other factions at the same time.

Borrow an army from a military ally.

Construct an allied outpost in a military ally’s settlement.

Defeat the Daemon Prince at the Brass Citadel in the realm of Khorne.

Defeat the Daemon Prince at the Mansion of the Plaguelord in the realm of Nurgle.

Defeat the Daemon Prince at the Palace of Slaanesh in the realm of Slaanesh.

Defeat the Daemon Prince at the Impossible Fortress in the realm of Tzeentch.

Have 2 level 20 Heroes at the same time.

The Height of Valour

Have 3 level 30 Heroes at the same time.

Once a hero reaches level 20, they can have the Immortality skill, which means they always end up wounded instead of dying, meaning you can’t lose the hero. Before that, you need to make sure they stay alive. You can always put 1-3 heroes into your strongest army and have them steamroll throughout the world.

Certain heroes also grant experience per turn as a skill called Training, which can be beneficial when leveling up.

Legendary Lords can never die, so keep using one of them throughout a long campaign and it will eventually reach level 30.

Have a special mount.

Many lords and heroes can unlock a mount via their skill tree, usually after a specific level threshold. The skill in the tree should be located at the very top, not connected to any of the trees.

The End of the Beginning

Without rushing, it took me around 3.5 hours to complete the prologue.

During the Prologue, fill Yuri’s army with units.

Yuri’s army needs to have 20 units. Kossars are really cheap to maintain and purchase.

During the Prologue, equip Yuri with every type of magic item.

The types are Arcane Item, Armour, Talisman and a Weapon. Finding one of each should be trivial, but if not make sure to check your quests to see if they grant you any of the magic items.

During the Prologue, spend 10 skill points.

The 10 points does not have to be on the same character.

During the Prologue, recruit a second Lord.

You can always disband the lord after you recruit them, if a second army is not what you need.

During the Prologue, win your first battle in the Chaos Wastes.

You will get this automatically when playing through the prologue.

During the Prologue, capture a settlement in the Chaos Wastes.

You will get this automatically when playing through the prologue.

During the Prologue, construct 5 buildings.

Spires to the Sky

During the Prologue, fully upgrade a settlement.

The ability to gain growth and upgrade settlements occur just after capturing a hostile settlement after gaining control of Fort Dervingard.

For the settlement which you want to fully upgrade, try to build as soon as possible buildings that grant growth, in order to speed up the process of which you can upgrade the settlement. Keep in mind the settlement does not need to reach level 5, only its own max level. Minor settlements cap at level 3.

Win a campaign battle in which you are outnumbered 10-to-1.

By having a single very strong lord and a supportive hero that can heal that lord you can get this achievement in a battle of 2 vs 20 units.

Legendary lords all have their own quests, which unlock when they reach a certain level. Once a quest is unlocked, complete the tasks until you reach the end of the questline, where you have to fight a battle. This achievement is automatically unlocked in the prologue.

Win 10 battles during a single campaign.

Win 50 battles during a single campaign.

Any decently long campaign and you will get this.

The Art of Surprise

You can ambush by setting your army’s stance to Ambush (if your race has it). Sometimes this achievement may be glitchy, and requires you to do it without shutting down your game (reloading saves is okay).

You get this achievement by finishing a multiplayer battle. If you don’t want to engage with other players, it’s possible to host a game and have an AI in the other slot and still get the achievement.

In order to get this achievement, you only have to launch the campaign in Multiplayer, not finish it.

Playing as Kislev, win a singleplayer campaign on Very Hard or Legendary difficulty.

You will most likely get this following the story as Kislev.

Playing as Kislev, invoke each type of Motherland in a single campaign.

Note that these major cities don’t have any additional settlements in their province.

Playing as Kislev, recruit an Elemental Bear to one of your armies.

Playing as Cathay, win a singleplayer campaign on Very Hard or Legendary difficulty.

There is an error in the titles and descriptions of these two achievements.

The Road to Riches

Playing as Cathay, construct the Grand Observatory of Xing Po.

Playing as Cathay, occupy the entirety of the Great Bastion.

Playing as Cathay, recruit a Terracotta Sentinel to one of your armies.

Playing as Khorne, win a singleplayer campaign on Very Hard or Legendary difficulty.

The Blood Must Flow

Playing as Khorne, reach the highest level of Bloodletting with an army.

The Blood is the Life

Playing as Khorne, recruit a Bloodthirster to one of your armies.

Playing as Khorne, replace a Herald of Khorne with an Exalted Bloodthirster.

Playing as Nurgle, win a singleplayer campaign on Very Hard or Legendary difficulty.

Playing as Nurgle, recruit a Great Unclean One to one of your armies.

Playing as Nurgle, replace a Herald of Nurgle with an Exalted Great Unclean One.

Playing as Nurgle, spread a Plague.

Playing as Nurgle, unlock all of the Plague ingredients.

Playing as Tzeentch, win a singleplayer campaign on Very Hard or Legendary difficulty.

Playing as Tzeentch, construct the Symposium of Change.

Playing as Tzeentch, take control of a settlement via the Changing of the Ways.

Playing as Tzeentch, recruit a Lord of Change to one of your armies.

Playing as Tzeentch, replace a Herald of Tzeentch with an Exalted Lord of Change.

Playing as Tzeentch, unlock all Changing of the Ways actions.

Playing as Slaanesh, win a singleplayer campaign on Very Hard or Legendary difficulty.

Playing as Slaanesh, construct the Pandemournium.

Playing as Slaanesh, recruit a Keeper of Secrets to one of your armies.

Playing as Slaanesh, replace a Herald of Slaanesh with an Exalted Keeper of Secrets.

Playing as Slaanesh, spread a Gift of Slaanesh.

Playing as the Daemon Prince, win a singleplayer campaign.

Playing as the Daemon Prince, win a singleplayer campaign on Very Hard or Legendary difficulty.

Playing as the Daemon Prince, ascend to a Chaos God’s path.

Playing as the Daemon Prince, ascend to the Undivided path.

Boons of the Mercurial

Playing as the Ogre Kingdoms, win a singleplayer campaign.

Playing as the Ogre Kingdoms, win a singleplayer campaign on Very Hard or Legendary difficulty.

Playing as the Ogre Kingdoms, offer a tribute of Meat to the Great Maw.

Playing as the Ogre Kingdoms, destroy a Caravan belonging to Cathay.

Playing as the Ogre Kingdoms, construct the Fire Mouth.

Playing as the Ogre Kingdoms, deploy 5 camps in a single campaign.

This is all about Total War: WARHAMMER III – 100% Achievements Guide; I hope you enjoy reading the Guide! If you feel like we should add more information or we forget/mistake, please let us know via commenting below, and thanks! See you soon!