Military Tier 7 to 8 was the hardest longest leap ever. Epic.
I look forward to the other leaps being no doubt just as hardcore.

Having finally figured it out, this guide is for all those out there that need that boost, just as I needed it.

This will only be focused on MT7 to 8, and will give credit to the amazing other guides appropriately.

If anyone is stuck on T7 Military, I feel ya. 100B is actually easy ONCE you have a few things setup…. “WELL why didn’t you just say so?!”
Others are far beyond this, it took me 2 weeks of daily but now I have a few tricks, I want to share them to make our lives easier.

I will list, then explain the tricks, in the order that made the biggest impact to the progression I was making.

What are the Focus Points

Here is the list of things that made the biggest impact on progression:

Aim for the top, if you can’t get the top one, go under that. So really EVERYONE’s first step is Scripting. Without a doubt.

This is tied 1st because AS SOON AS YOU GET a TIER 5 Town Resource Producer, this upgrade producers more town resources than it costs. I went from E21 to E30 in a matter of minutes becuase I reset and upgraded this beast.

WOW. Uimoru’s factory scripting. Get them all. Simple.
Look out for the _test script as THAT script will be the only one you edit. Read His Detailing Deeply.
NOTE THIS:

I made 3 other scripts that help, I’ll include them in the next section.
One is for a quick visit to the Trade Post DURING Uimoru’s main script,
One the Shipyard, again during, to climb the bonus’s of shipments!
One is a impulse trigger script in the Museum Offshore Market to mass purchase and combine large tier power stones

Mega Bonus’s across the board, The trick to getting higher level ones is with a script (see detailed sectioning in the next chapter). 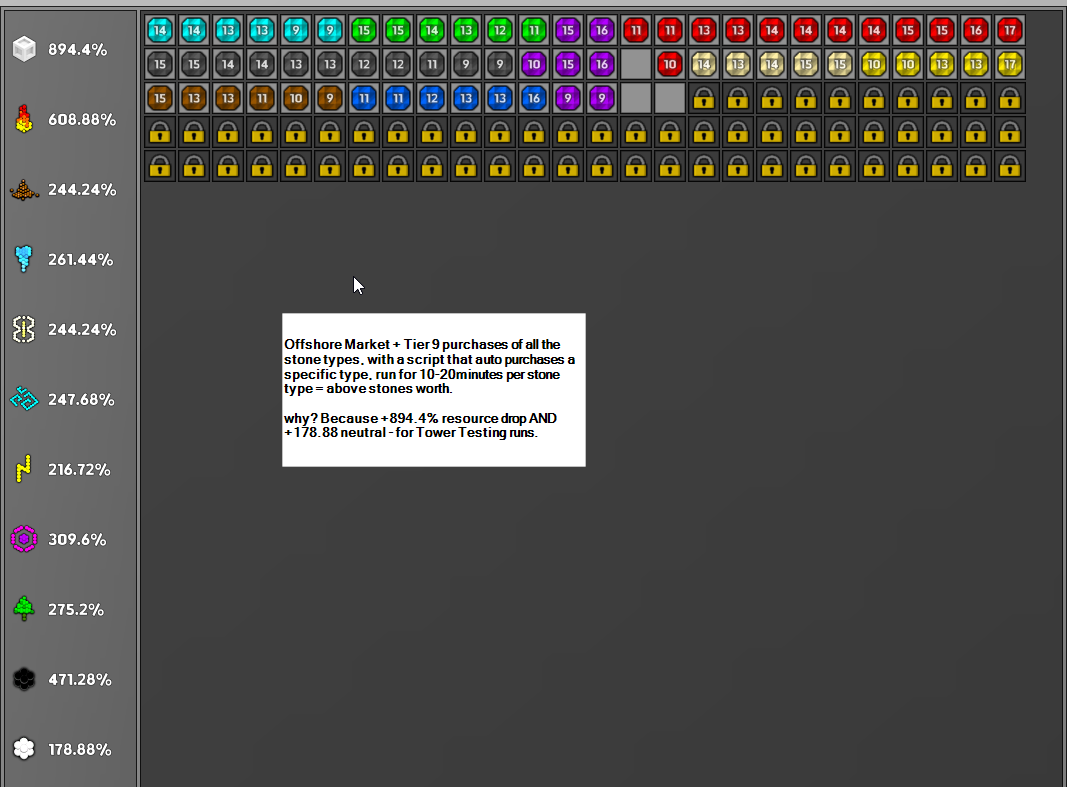 I can’t believe I missed this one.

makes all the difference in the world, took me from MT3 to MT7 in less than an hour 😀 LOL
And this one is USEFUL

Tower Testing – get all the unlockables.
Power Plant – Set it up via one of the ‘cover all guides’, then have a SINGLE WORKER replace power plant fuel containers. jobs a goodun.
I changed the Uimoru script to hit 25% instead of 10% too.
Mine – Script handles this.
Factory – Scripting heavy. small touches manually once you know what you are doing.
HQ – upgrade everything
Arcade – not really complete, but try reach highscore and buy all you can.
Lab – upgrade everything casually, guides help here!
Shipyard – Upgrade all, script for quick 5min shipments, later 1day shipments for 10+ exotic gems at once.
Trading post – quick trade all at 10% script & most important upgrade.
Workshop – an Obvious, Glass cannon until your T5 producer makes more resources than your runs, then I’ll share a good blueprint that you can import until you can unlock Era Blueprints.
Museum – Power Stones.
Construction – Everything here should have been upgraded a while back, I have 1 worker buying the most expensive upgrade each tick.
Cubos – I hardly have touched this yet, but the first bosses were an easy win and easy exotic gems!
OH AND
Workers – 1 on everything useful as mentioned above. I have 5 mining for me & 2 making power stones (though I wish they could do offshore marketing power stones
Town Assets – OMG so much resource bonus.
Perks – Mix this with Power stones and Town Assests and Resource Production, voerall this is a great thing!!
—————————————————————
If you are familiar with the game already, then the above will give you everything you need to know

Ok so, you want this, why? because it gives more resources than casual tower testing.
how do we get a T5 Town Resource Producer?
1. Uimoru’s Factory Autocrafting scripts. All of them.
2. Upgraded Belt for refinement speeds
3. Upgraded other machines for increased speeds (at least T5/T6 in everything)
4. T4 Town Resource Producer then cross that with the Resource boost from the Trading Post.
Here is the image again because it is so important.

One is for a quick visit to the Trade Post DURING Uimoru’s main script, this trades everything for 10% value, increases ALL resources over time due to resource producers!!!!,

One the Shipyard, again during, to climb the bonus’s of shipments! (needs proper setup, bare witness to it, my script ain’t great!). This is for latergame when I want to do day shipments to get gems

One is a impulse trigger script in the Museum Offshore Market to mass purchase and combine a pre-selected power stone of any tier!!! VERY USEFUL

So after my emphasis of the above;
this is what I did to get there:
I ran nightmare Neutral endless runs in the super script for my largest resource input till I got my T5 town producer.
I completed as many lab goals as possible.
I got +200% in every Power Stone group.
I got +800% in town asset resource bonus
I got lvl 15 in all blueprints
I kept trying to upgrade my belt tier by tier (its now green! with a 900x speed for refinement)
I would turn off the MEGA SCRIPT to run my Museum Offshore Script.
I would run a few bosses, pyramid is easiest, but long.
I would keep upgrading lab stuff as I could.
THEN once I was ready and had my T5 producer;
I used this blueprint…

…which helped survival.
I ran endless on easy forest.
and about 30minutes – 1 hour later I was hitting the top waves! (each time I died it’d increase my highest wave by a good 10million+)

Oh and First things first for Factory MAKE THESE:

Trust me
you’ll love
that you
did this.

Who are the People to Thank

Why thank people?
because SCRIPTING IS CRAZY.
because guides are useful.
because time and effort!

When?
Now?
Is memory an illusion? Is worry over a placebo thought future also an illusion?

I had to include something in the When as I had covered the other questioning word statements.

Hope you have a great rest of your day, stay healthy and safe and all that!

I hope you enjoy the Guide we share about The Perfect Tower II – Military Tier 7 to 8; if you think we forget to add or we should add more information, please let us know via commenting below! See you soon!