Extensive and detailed guide setting up or debugging AI of units in The Hand of Merlin, written by its game designer Mat.

In this guide, I’d like to walk you through the creation of an AI, which can make an enemy unit use their skills on their own, against your warband.

How does AI work in The Hand of Merlin?

Our programmers chose to use the Utility AI paradigm. This means, in simple terms, that for every ability we let our AI consider, it’ll try to rank the “utility” value of its casting in each single tile it can cast, and then compare all options, picking the one with the highest utility value. It’s a great way to consider multiple options at once.


Specifically in our case, each “Unit Class” has its own “Brain”, where we’ll describe options and the questions the AI makes to each target tile.


If that isn’t clear yet, don’t worry, let’s go step by step.

First of all, we have to create a Brain. A great way to do it is via the Create Menu (CTRL+N), and then selectingGeneric -> (merlin) AI brain params. 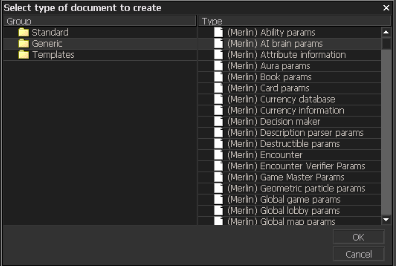 Alternatively, if you already have a Unit Class file, you can create a new Brain directly on that file, and then open it separately. 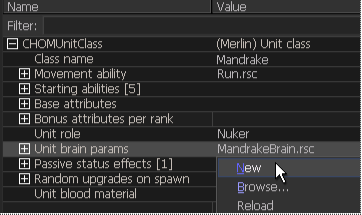 Either way, the result is a blank Brain file, like this one:

Be sure to save that puppy (we use the Content\Merlin\AI\UnitBrains folder).

Note that there’s not a lot going on here, as we still have to fill in the Ability Considerations, but there’s already something called a Unit Priority. I’ll take this chance to explain what Priority is.


It is, well, our “Utility” value for each action. During an enemy turn, since our game uses Side Initiative, all possible actions from all possible units will be ranked in how high their priority is, and they’ll be played in that order, as long as there are available abilities. As we’ll see shortly, the Ability considerations are the heavy lifters here, but if you ever want a unit to consistently play first or last, you might want to play with the Unit Priority, as this will multiply the priority/utility of everything that that specific brain calculates.


For an example on how that works, Behemoth has a priority of 3, and the Warlock (Support bandit) has 0.5. This usually makes the Behemoth play first, and the warlock after all other units.

Now, let’s look at the Ability Consideration Sets. Here, you should have at least one for every ability the unit has, but some abilities (like Run!) can have multiple entries.


Think of each Consideration Set as a question your AI can ask. In the example below, “If I am going to use Shoot, how should I use it, and is it more important than other abilities?”

Each consideration has 4 properties:

Found in the Content/Merlin/AI/Behaviours folder, and always named with a `Behavior_` prefix, these are the building blocks of the AI. Technically, you can mix and match between those, but I recommend creating your own Decision Makers, especially if you have a specific behavioral pattern in mind.


Each Decision Maker is nothing more than a combination of Scorers, that take the priority of the ability and multiply it by some value. In the picture above, you can see that the Behavior_OverwatchDefensive decision maker, associated with Mandrake’s Prepare Shot ability, has 3 scorers:

Note how they have a specific naming convention. All of these scorers, found in Content/Merlin/AI/Considerations, have one of three suffixes: Gates can set a priority to 0 or 1, almost like a boolean. Score tend to be more subtle, ranging from 0 to 1, and Bonus can only have 1+ values, making something MORE likely. This is just my personal conventions though, and you can feel free to name them whatever you prefer.


To dive a bit deeper, Let’s take a look at how Gate_NoOverwatch Ally works: 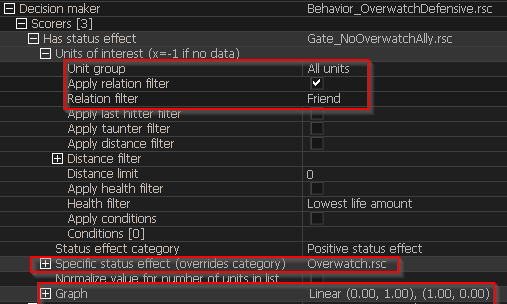 First of all, it’s of the type “Has status effect”, which is kind of the category of question. We’ll list all the questions and their base properties in a sec. So, we have to qualify the question. “Who” has “which” status effect. The “Who” here is the Units of Interest. I can set it up to search for all sorts of units, like those inside an area, those with a specific health ratio, those with specifics relations, etc.


In this case, we’re searching for all allies, so we put All Units in the unit group, and we apply the relation filter, with the Friend filter.


Then, which status effect? We could use a category (positive/negative/marker/hidden), but for this case, I just wanted to know who has the `Overwatch.rsc` status effect. And there you go.


So, the Answer to this question will be a number of units that are my allies that also have the listed status effect. This will be plotted as the X value in the Graph entry.


To check out this graph in a more visual way, I suggest clicking on the the graph button, here

Which grants you this visual over here:

As we said, the X axis is the “answer” to the consideration’s question. The Y axis, however, is whatever we decide should multiply the Priority given a X value. In the example above, if the X is 0 (there are no allies with the Overwatch status effect), then we’ll multiply the priority by 1. If, however, there are 1 or more allies with the status effect, then we multiply the priority by 0, cancelling the entire operation – Mandrake will not use Prepare Shot.


Hence the name – is a Gate to see if there are allies with the Overwatch effect!


All Scorers work in this same way, providing you with an X for you to decide what the Y should be. Here’s a quick rundown of all the types, so you know what to look for. By the way, questions that are “Yes/no” result in 1 for yes, 0 for no, as expected. 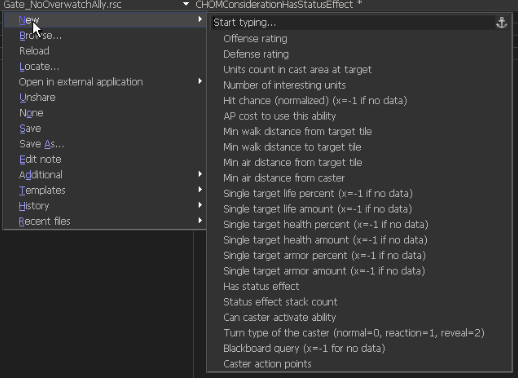 The combination of these last two can do wonders for the “personality” of your AI. Work a good graph to balance between “defensive” and “offensive play!


Do note: if your movement ability determines that the current tile is the best possible tile, the unit will just stay put and pass a turn.

Small parting note, to help your testing out. When you are messing with new enemies in your tests, there is a Console Command that can give you some information about the end result of your queries.


To use it, when you are running a simulation, press the tilde key and type

This will make it so that when the AI starts to consider their first turn, they actually print to the screen all actions with >0 end priority. When you are done, set the same variable to 0.

With this, I can see that he could’ve used Ooze Run, Gaze, Corrupt, and Far Run, but Gaze wont out by a landslide, also noted by the red yellow line. Just right click to step through the process of every action, and you’ll see how your configuration ended up working!


There you go! Go forth and have some fun creating new brains for your units!

Hope you enjoy the Guide about The Hand of Merlin – How does AI work – Artificial Intelligence, if you think we should add extra information or forget something, please let us know via comment below, and we will do our best to fix or update as soon as possible!