This guide will showcase one of Spy’s weapons that works incredibly well when paired with a special bind.

Here are the stats of Spy’s least used revolver… The Enforcer. 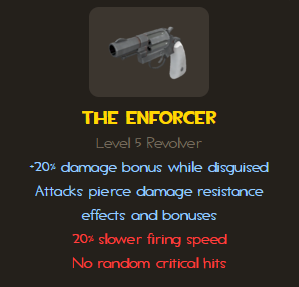 So the only downsides are 20% slower firing speed, and no random crits. Although, the slower firing speed can actually be useful as Spy, as it makes successive shots you’re firing more accurate than if you were firing the stock Revolver. (Due to the slower shots, there’s a little more time in between each shot, which gives the gun more time to reset its accuracy.)

But the main problem with this weapon… is that when you’re disguised and you shoot an enemy, they take 20% more damage, but then all your following shots will just deal normal damage, as you instantly get undisguised after shooting.

So in order to make this weapon amazing, you would need to get automatically disguised the immediate second after you fire a shot… and I came up with a way to do it.

We are going to make a bind that, once toggled, will automatically disguise you whenever you shoot.

First we need to open up a specific folder in the TF2 files on your computer.

Go to this folder:

Here’s a screenshot of it on my PC:

Once you’re in the tf\cfg\ folder, create a new text document there, and then open it up.

Paste this entire thing into the text document:

But before you save it, set the file type to ‘All Files’, just like this:

And save it in the tf\cfg\ folder where you made the first text document.

Now you can delete the old text document in the tf\cfg\ folder. It should be an unnamed text document, just delete it. So all that’s left is the new Spy.cfg one.

How to Use the Bind

Also, I used V as the key for this bind, but you can change it to any other key you’d prefer. You can change it by editing the last line in the Spy.cfg document. This line: bind v “spytoggle” Just replace the v there with any key you’d like.

I have a sneaking suspicion that some people will think they can get VACed for this, because it’s editing files in the TF2 folder… but this is 100% allowed. It’s just using console commands that the devs themselves put into TF2 for people to use. It’s the same as any other bind you’d make, only there are aliases used in this one, so it has to be put in a text document instead of the ingame console.

And if you still have any doubt, here’s an excerpt from the official TF2 wiki:

But anyway, thanks for checking out my guide! 😀

Maybe this will start a new meta in TF2, lol. The Enforcer is an awesome looking weapon, and it feels awesome when in unison with this bind.

This is all about Team Fortress 2 – The Enforcer Best Spy Weapon & Bind Loadout; I hope you enjoy reading the Guide! If you feel like we should add more information or we forget/mistake, please let us know via commenting below, and thanks! See you soon!