This guide is just an organized rant on how to protect yourself and your team from the ever-present bots in TF2.

Hello and welcome to my guide on how to beat the bots in TF2. I will be splitting this into a few segments about the different bots. Please keep in mind that the problem is constantly evolving, so information could be outdated by next month or so.
Bots I will be covering:
Waffen SS
Braaap
Name thiefs
Other ones

The Waffen SS bot is probably the most common bot in TF2 at the moment. It chooses the sniper class like most bot, but its a little smarter than a clueless aimbot. I have noticed that the waffen bot has a few tricks that it uses to confuse player, which is why I’m making this guide. These bots also stand out by spamming the birthday popper, and playing a scary halloween ghost sound when they dominate the server. You should always keep an eye on the game chat and take note when Waffen SS joins. It will then precede to call a vote kick on a random player and usually clear the chat, leading to confusion. When you see a vote menu pop up, ALWAYS check to see who is calling the vote and who the vote is kicking! At the top of the vote menu, there will be a line a text stating, “(player) wants to call a vote,” and if the name is Waffen SS or sometimes Player, immediately hit F2 to vote no. Many people won’t check this and hit F1, getting their own teammates kicked out because they didnt pay attention. 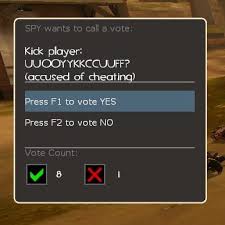 Next, check the person being accused and make sure that its not a teammate you already know isn’t cheating.
Now that we got past the first obstacle, the next step is to immediately call a vote on Waffen SS to get it out of the game (it always has a black profile picture).

The next bot to tackle is the braaap bots. Instead of choosing sniper, these bots opt for heavy. Similarly to the Waffen SS bots, the braap bots are also able to call votes on your teammates, so refer to the previous section on how to not get your comrades kicked. Braaap bots often join in small to large groups, which only makes it harder to remove them quicker. When your team has multiple bots, it is your duty to call a kick vote on the bot, and if you can’t, call it as soon as you can. Braaap bots are also easy to spot because their name is always braaap [number] and their profile picture is a lost signal image. 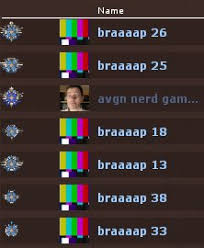 The name stealing bots can be difficult to remove because encounters with these bots often get teammates kicked by other teammates out of confusion. However, if you follow these steps carefully, they are simple to remove. They are usually first seen when a new player join the game and you notice that it has your or a current teammate’s name. Assuming that the player it stole the name from at least has a few points on the board, you can pull up the scoreboard and wait for the duplicate to join. This example will be easier to understand if I use my own profile. If I see another CDubFTW join the game, it will appear at the bottom of the scoreboard with a sniper class icon and mostly notably, a different profile picture. That’s all fine and dandy in the case that the bot stole my name because then I could pull up the vote menu and kick the name that doesn’t have my profile pic (ol’ Kaiser Willy), but its a small chance the bot will take your name. If the bot takes someone else’s name, pay attention to the profile pic of the bot and the original player. Make sure you call a vote the bots profile pic and not your teammate’s. Next, inform your team that you correctly chose the bot to increase their confidence in the vote and ,ultimately, get the bot out. If you weren’t paying attention when the bot joined or you are having a hard time determining who is real and who isn’t, you need to back up and observe the bot. Hopefully the original teammate isn’t also playing as sniper and gaining points fast, because these are signs that it could be the bot. 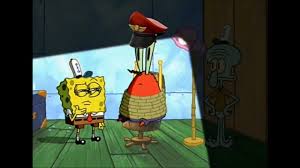 I covered the main bots in the previous sections but there are still smaller minor bots out there. Just today, I think I saw a new and interesting brand of bots arrive to the scene in the map koth_harvest. It seems that there is a new bot type named “(number) e3u’s demoknight bots” (I’m pretty sure I messed up the first part of the name). These bots join and hunt in packs, but are easily repelled by heavies. When they lose a significant amount of health, they seem to attempt to save themselves and run away to the nearest health pack, even if they were just attacking you a moment ago. Any attempt to kick them is futile if they are a majority of your team, because they vote no if you try to kick one of them. Whether these niche bots will grow or not is unknown at the moment but its weird to see the new evolution of bots.

In the case that bots are able to vote no to protect themselves AND they make up a majority of one of the teams, leaving and joining a different server might be better then the headache of dealing with them. If everyone knew what to do when bot(s) join, bots would have a much smaller impact on the game than they do right now. To summarize this whole guide: stay alert, watch the chat, call out bots on either team, and avoid the potholes the bots put in front of us. Thanks for reading!

I hope you enjoy the Guide we share about Team Fortress 2 – How To Effectively Beat the Bots- February 2021; if you think we forget to add or we should add more information, please let us know via commenting below! See you soon!