Achievement guide for a digital edition of board game Talisman.

Guide is meant for everybody I will write description on how achievements are obtained with additional tips on how to obtain them fast and if possible with least amount of effort.


This guide is meant for everybody casual players and completionists alike.

I will do my best to describe how to unlock each achievement.

Majority are self explanatory but some are a bit confusing and some are just luck based or take long time to setup hence why I hope this guide will assist you.


Under section “Suggestions on how to play” I will describe the way I did almost all these achievements, you are welcome to modify the tactic as you wish.


THIS GUIDE IS A WORK IN PROGRESS

IT WILL BE UPDATED

ANY SUGGESTIONS OR TACTICS ARE WELCOME

Suggestions on how to play

I myself got the game as a gift, haven’t purchased a single expansion so far.

Every Monday game gives a single expansion for free for people to try out, which allows you to unlock achievements without buying the said expansion.


Here is how you unlock expansions even if you bought them or are using the weekly free one: 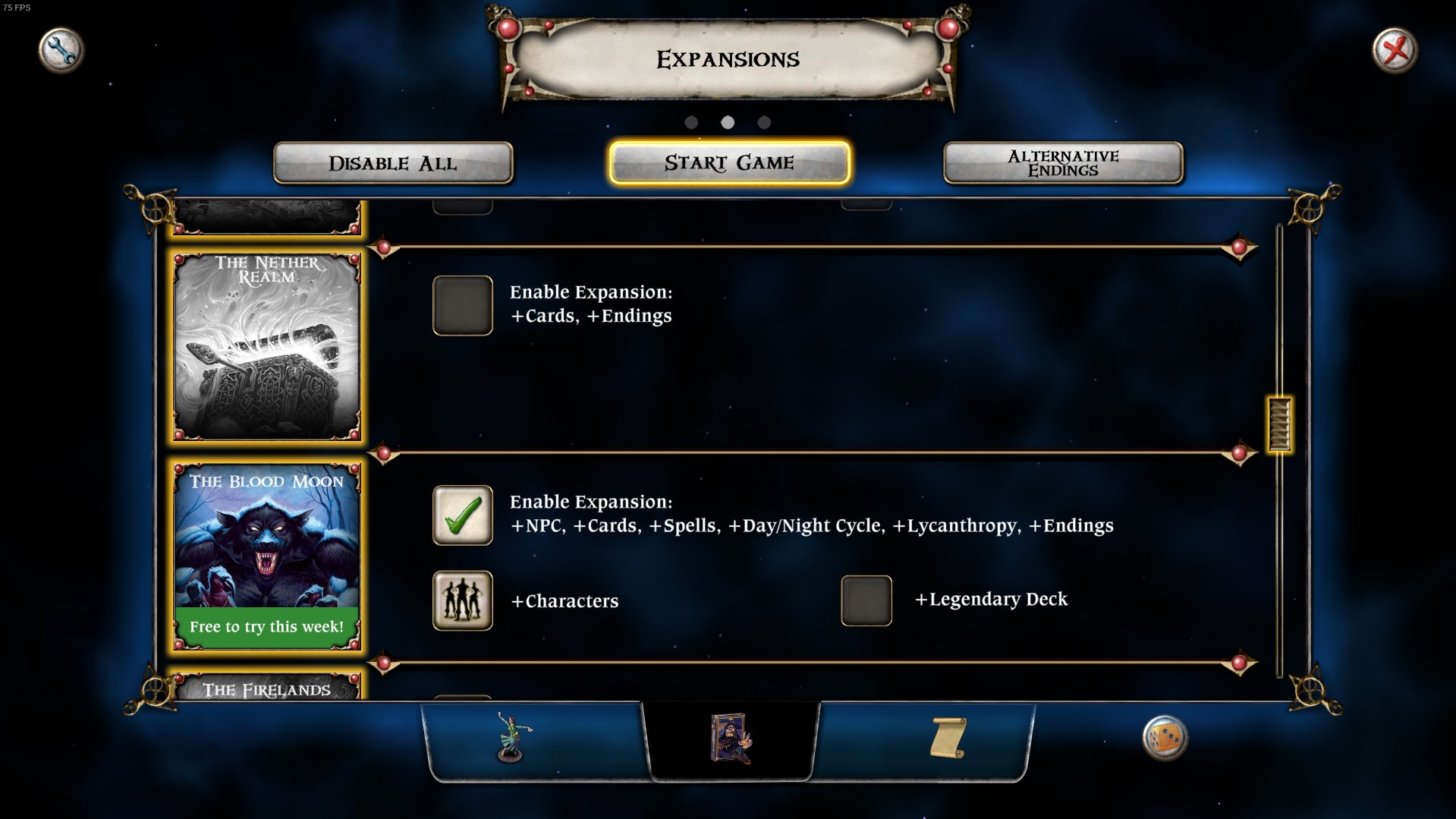 I highly suggest you TURN OFF “No Respawn” under “House Rules”

That way you and other players can play until winning condition of the game is met. 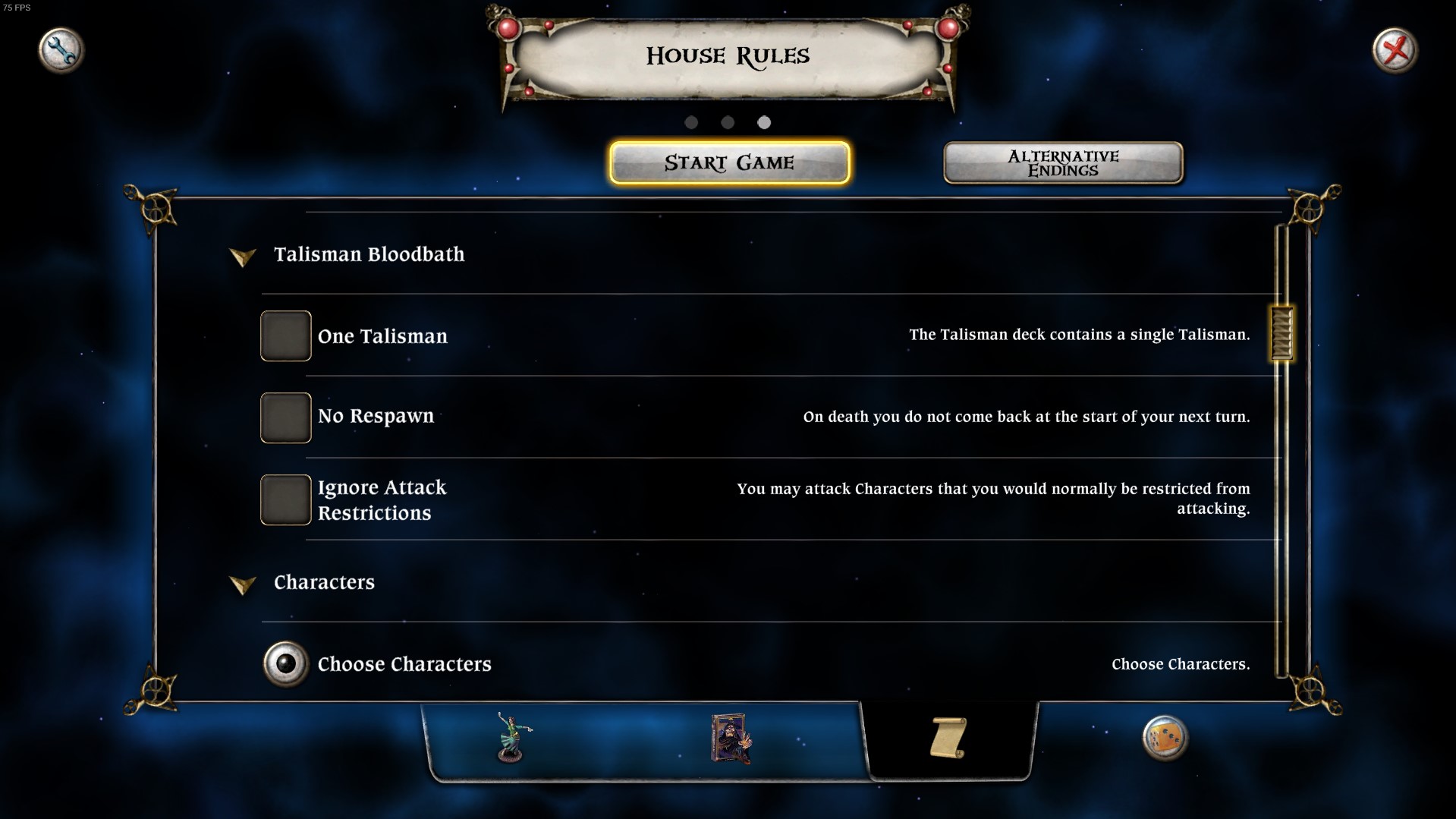 As you level up your profile you will unlock Runestones.

Be sure to TURN THEM ON under “House Rules”

They are really useful early game and even later in game 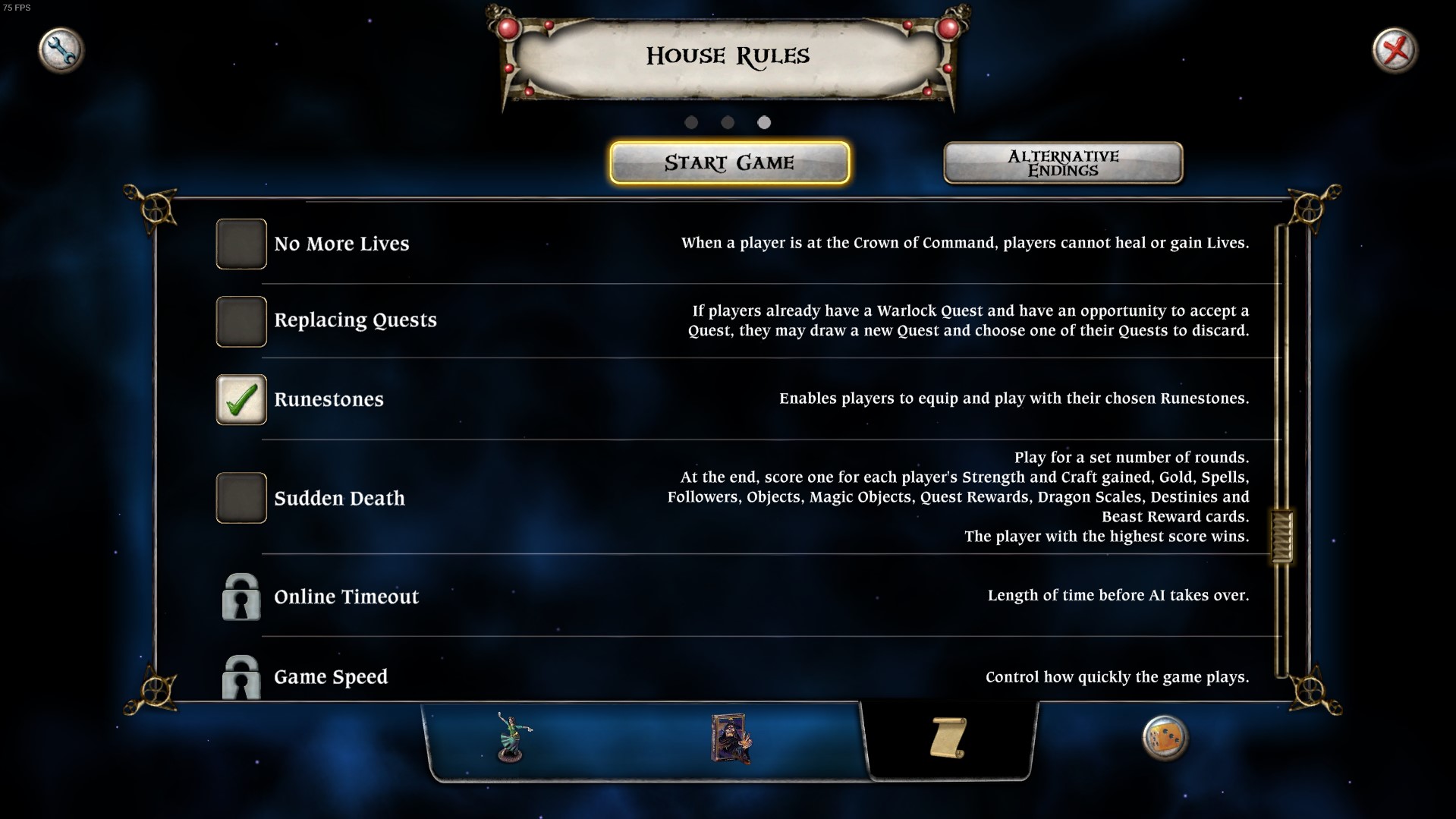 Here you can see my standard Character Selection screen: 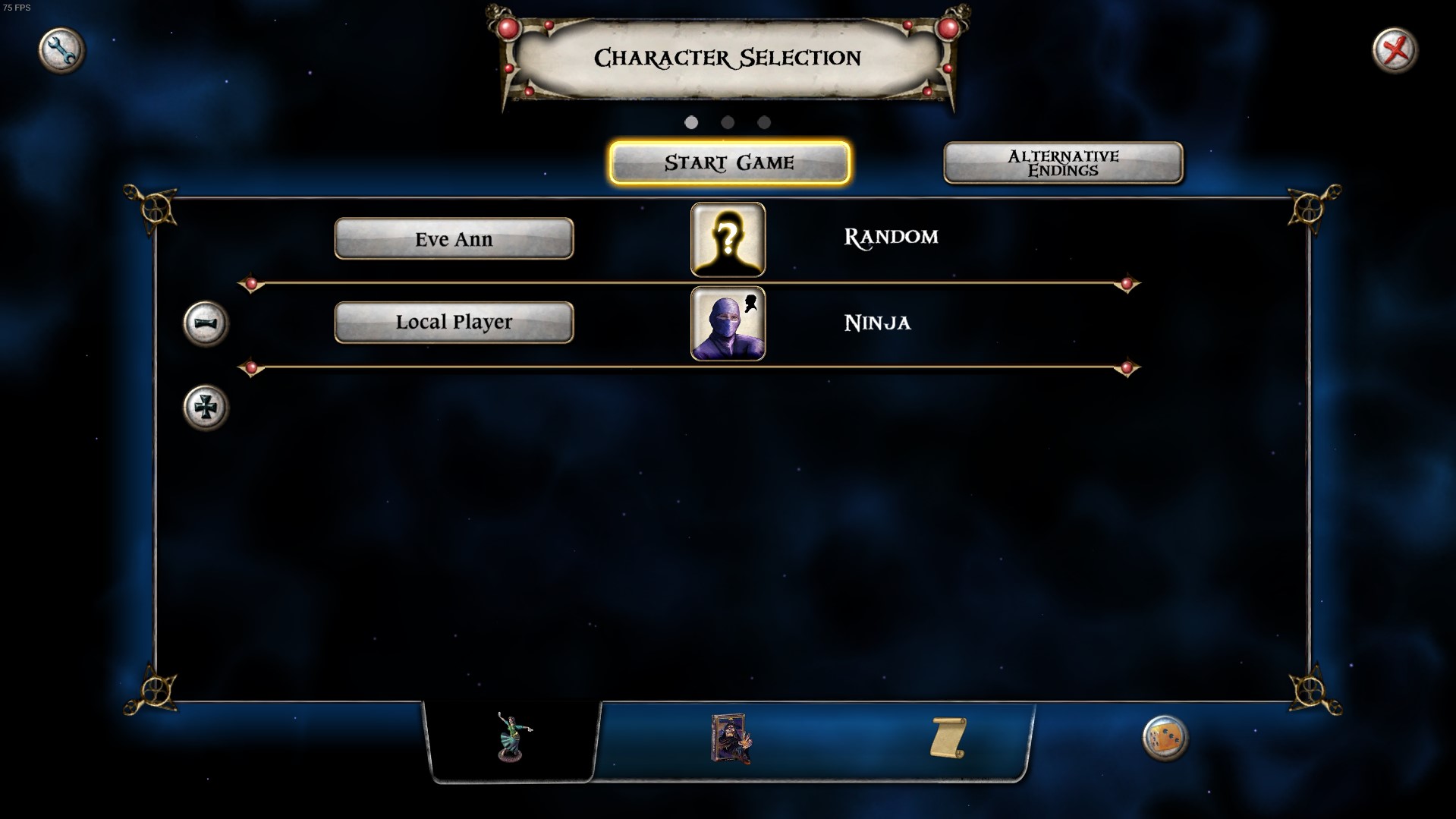 That way you control every aspect of the game, and trust me certain achievements require a certain degree of setup that requires A LOT of luck to have in AI or Online games.

Be sure to remember to change from “AI PLAYER” to “LOCAL PLAYER” by just clicking on the button.


I play almost all of my games versus Ninja.

YOU UNLOCK ACHIEVEMENTS WITH YOU MAIN CHARACTER


In general your Main character is the ONLY ONE WHO CAN UNLOCK ACHIEVEMENTS.

This is really important, your Local player is just there for the ride, you don’t bother giving him any useful items or give him opportunity to increase his stats and he should leave all Enemies to your main character to farm for himself


This one is up to preference

This is my go to setup in majority of games unless I focus on Craft.

Majority of fights are resolved with Strength and with reduced trophies needed to upgrade it you will quickly have 20+ Strength and just breeze through games.

Needless to say you will know which Runestone setup you prefer or need based on game you are going into the more you play.

Which brings me to another point.


STRENGTH OR CRAFT PATH TOWARDS CROWN OF COMMAND


I prefer Strength, because other then Death puzzle it’s much easier.

Craft one requires sacrificing either health or followers and “Pits” is just annoying when you get a bunch of Pitfiends to fight; but as usual per personal preference.


This one is situational.

If you are doing a certain ending for achievement then naturally you will choose that one.

That way I know whenever I’m done with achievement in this game I can just rush to Crown of Command and the moment I land game is over and done. 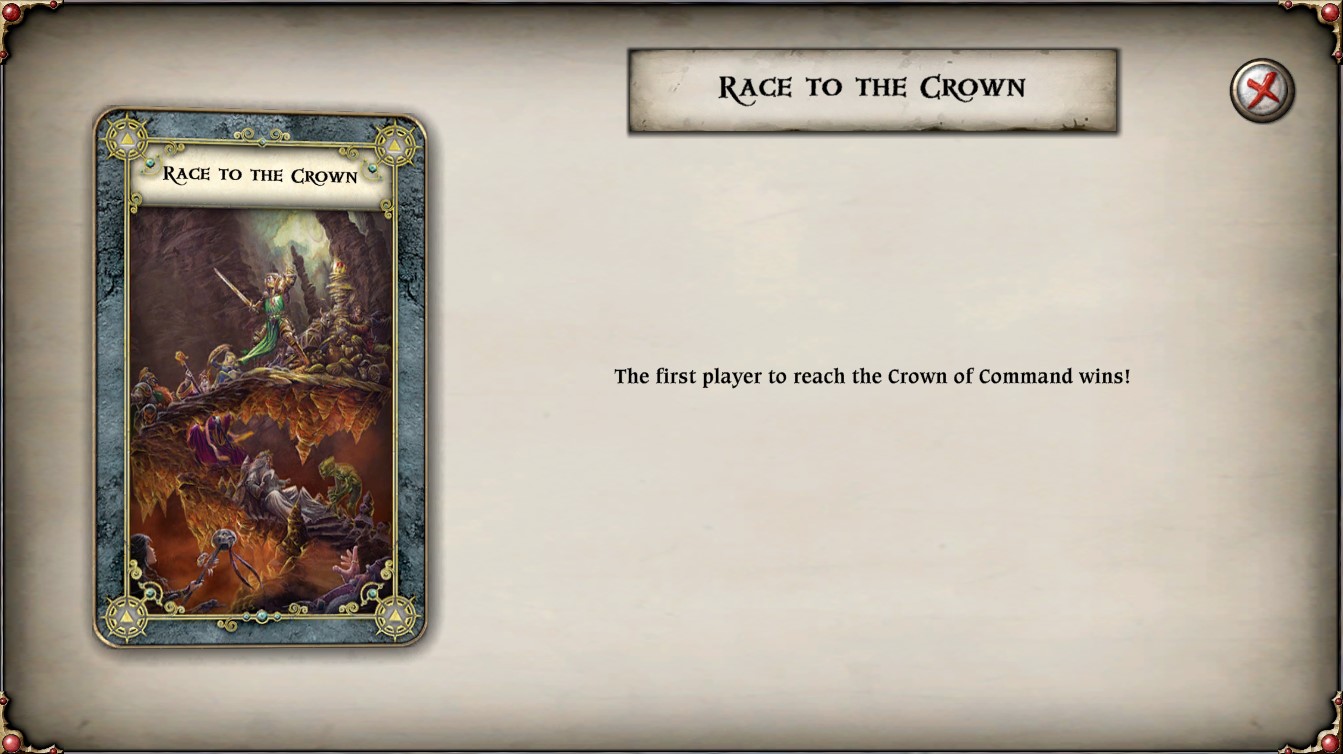 
Majority of descriptions will assume you play in a hotseat game, so if you aren’t doing it be sure to read the steps I’ve made and modify your tactic accordingly.

As stated before this particular guide is made to make achievement hunting as easy as possible; you are more then welcome to obtain in your own condition I just hope my tactic / explanation will help you clear any confusion on how the achievement is obtained.

As the Bounty Hunter, gain 6 gold from a character bounty.

As the Cat Burglar, Burgle the most expensive item from a shop.

As the Elementalist, automatically defeat an enemy Elemental.

As the Spy, shadow a character in order to encounter another.

This Round’s on Me

As the Tavern Maid, pour a drink to more than one character on the same space.

I Know What Makes Him Tick

As the Tinkerer, defeat a Construct and take it as a trophy.

Pay the Assassin to take all of a character’s lives.

Have the Flail and Full Plate.

Repair a broken sword or armour at the Armoury.

Claim 15 gold in bounties in a single game.

Have Terrance and Hopper.

Win the game with the Thieves’ Guild ending.

Win the game with the Merchants’ Guild ending.

Win the game with the Assassins’ Guild ending

Not All Doom and Gloom

As the Doomsayer, in one turn, replenish one fate and gain one spell as a result of any player drawing cards


Not so difficult as much as RNG, Doomsayer can replenish fate everytime a Enemy card is drawn and can get a spell every time an Event card is drawn.

So the trick is to draw both types of those cards in same turn.

My advice is playing hotseat game versus Ninja (he can evade most encounters and can’t pick up followers allowing for having safe spots to land on) and reach inner circle and move between Oasis (Draw 2 cards) and Hidden Valley (Draw 3 cards) and be sure you have both Fate and Spells spent (so you can actually get it when drawing cards) and well at some point you will draw both Enemy and Event card which will regen Fate and give you spell and giving you the achievement also.

As the Grave Robber, draw an object from the top of the discard pile


One of Grave Robber abilities is that every time you are about to draw Adventure Card it gives you an option between an Unknown card or one from discard pile already used in the game so far.

Achievement will unlock if instead of drawing a new one you choose to draw an Object from discard pile (it will most likely be a bag of gold, or you can intentionally go sell some object at Alchemist to increase the chance of getting the object to draw from discard pile)

As the Vampire Hunter, find the Wooden Stake


Simple, while playing as Vampire Hunter find and pick up Wooden Stake item. 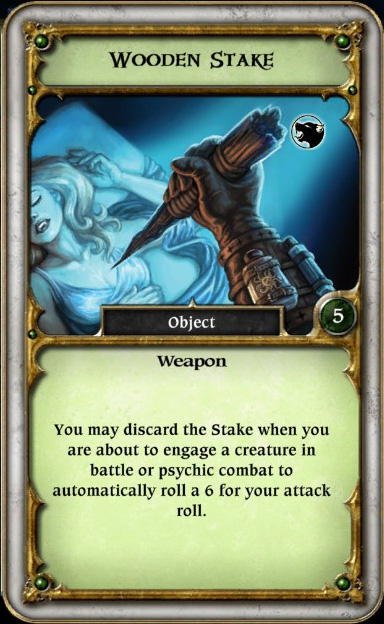 Use the Wooden Stake against the Vampire Prince

Once you fight him be sure to choose Wooden stake at start of fight and then during fight activate it.

You will unlock the achievement the moment you use the card, winning the fight is optional.

P.S. If you encounter Vampire Prince while encountering “City of Shadows” card and using Wooden Stake on him will NOT work 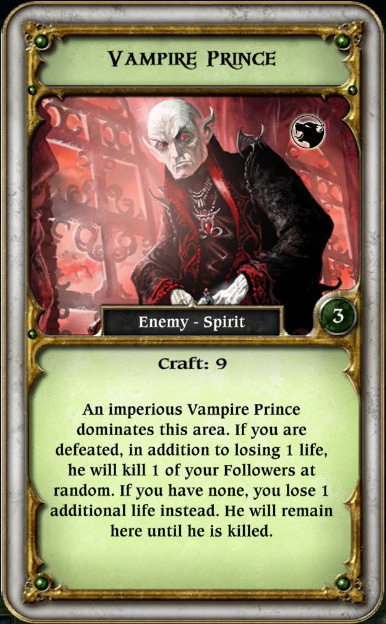 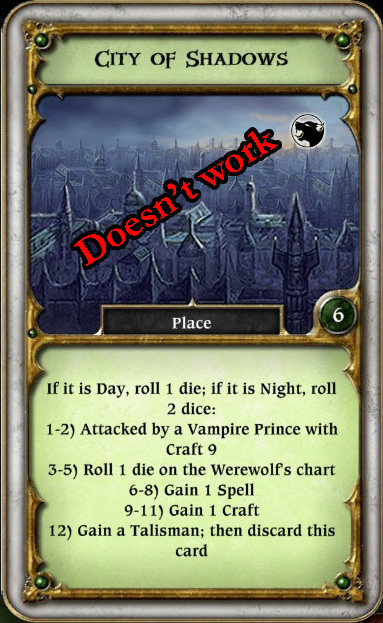 
Fairly simple, player 1 needs to have lycanthropy and must encounter another character who doesn’t have it. Win in a fight and you will unlock this achievement.


Find Wolfsbane object card and use it when you have lycanthropy to remove the curse. 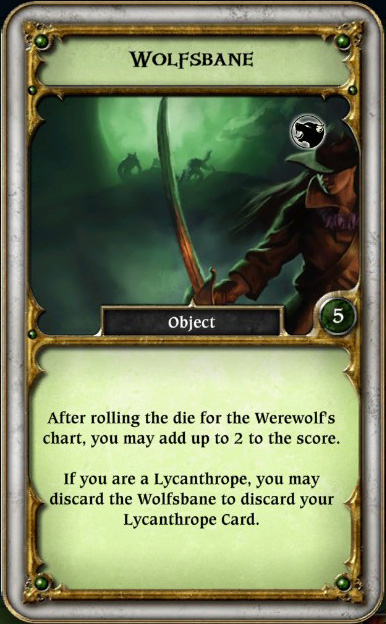 Encounter Growing Suspicions with a lycanthrope in the game


Self explanitory, I had few lycanthropes in my games so when I encountered this card after rolling it just unlocked itself. 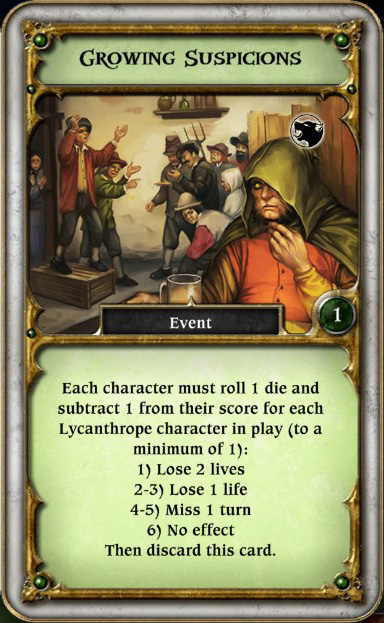 Doing that will allow “Blood Moon Werewolf” ending to be chosen.

During the game obtain lycanthrope curse and reach the Crown of Command and kill all players to win game and obtain achievement. 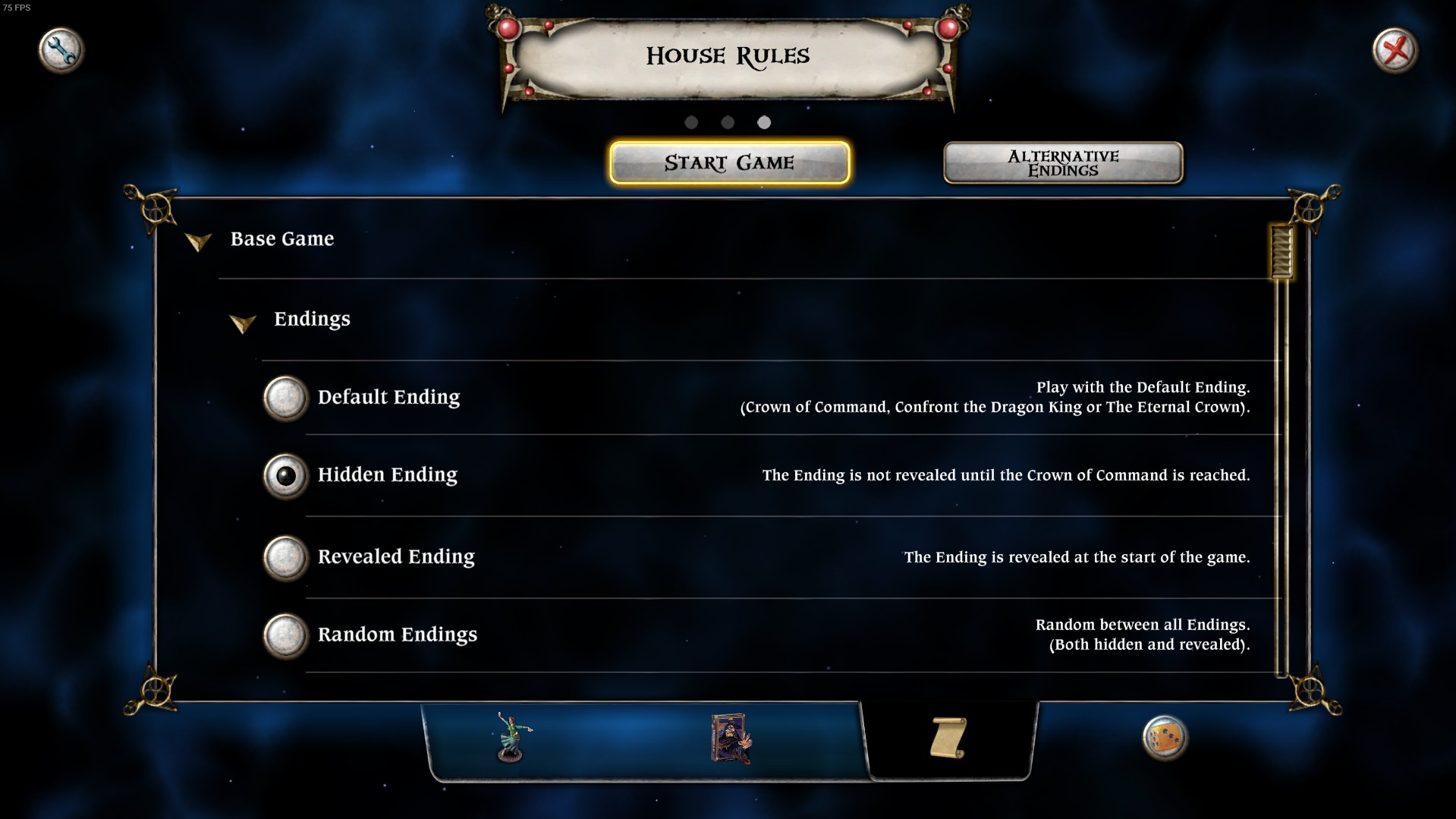 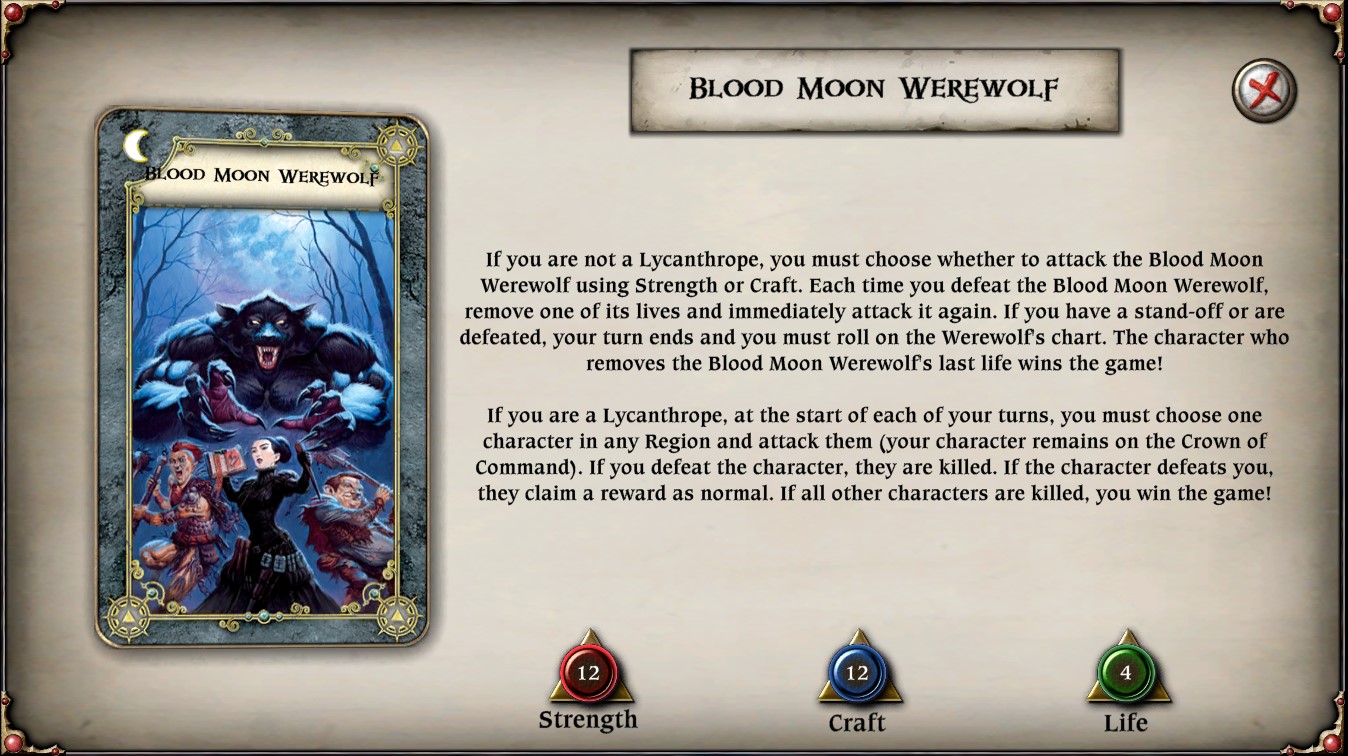 Win the game by defeating the Blood Moon Werewolf

Doing that will allow “Blood Moon Werewolf” ending to be chosen.

Be sure you don’t have lycanthropy curse and reach the Crown of Command and defeat Blood Moon Werewolf 4 times in a row to win and get the achievement.

Win the game with the Lightbearers ending


While playing with “Lightbearers” ending be sure to win before time runs out. 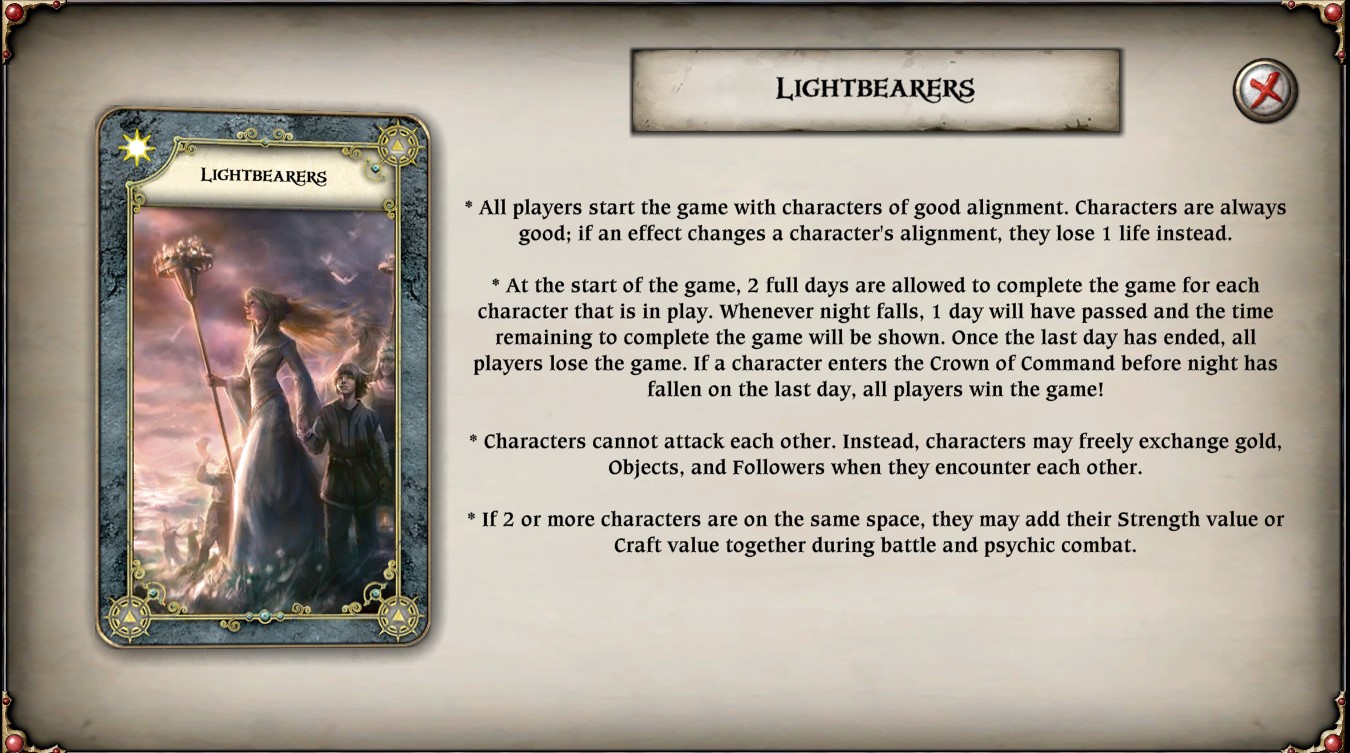 Give all your gold to one of your allies


Can only happen while playing with “Lightbearers” ending.

When you land on any character give them all your gold.

Win the game as a lycanthrope with the Lightbearers ending


While playing with “Lightbearers” ending win the game while also having lycanthropy.

(I unlocked both Light Bearers and Daywalker in one go)

Meet with a terrible fate

Doing that will allow “Horrible Black Void” ending to be choosen. 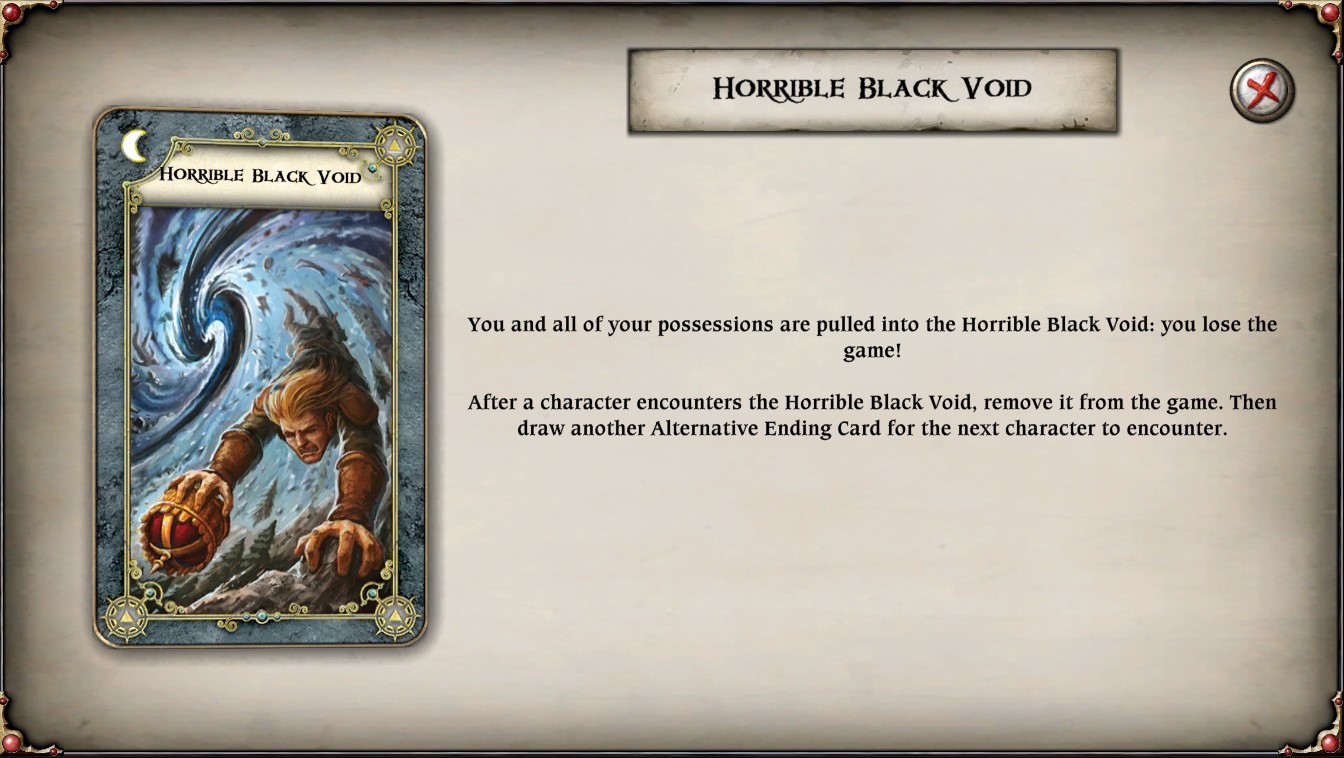 The Realm of Souls – Expansion (UNFINISHED)

This is all about Talisman: Digital Edition – Achievement Guide – WIP; I hope you enjoy reading the Guide! If you feel like we should add more information or we forget/mistake, please let us know via commenting below, and thanks! See you soon!