Don’t hesitate to use CTRL+F to find what you are looking for.

(written from the Dlsite version then adapted to Kagura’s translation; may contain errors or omissions) 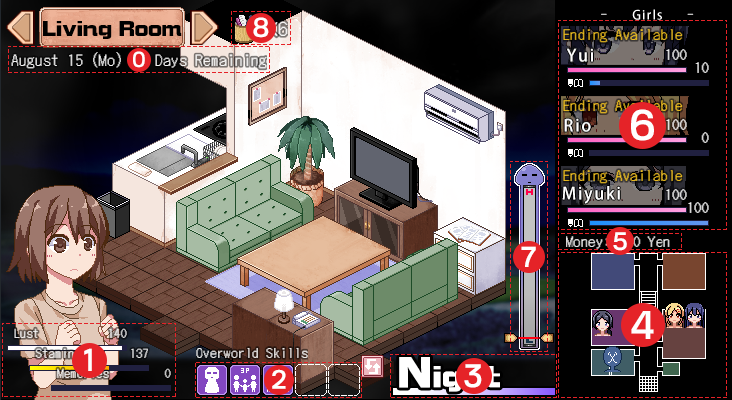 (⓪ Day and days left; ① Player’s stat; ② Skills; ③ Time Slice (TS); ④ Map; ⑤ Money; ⑥ Girl’s stats; ⑦ Vigilance & Game Over; ⑧ Action points (AP))    The game takes place over 30 days that you can occupy with different activities.  Each day is divided into 4 moments: Morning, afternoon, evening, night.  Each moment has its own events. The player can manually move to the next moment by clicking on the time indicator or by running out of stamina.

The pencil pot at the top of the screen represents the number of actions the player can perform before moving on to the next moment. The player starts with 3 points and earns 1 after each family outing (Sunday). Progress through subheroine’s quests grants more AP. 2 points can also be purchased as skill for 100 points each. (see Bonus)

The player has 3 bars:

Every Monday, Miyuki give you 500¥. If you have s*x with her, she gives you 1000¥ instead. There are 2 way to earn money (¥) : By doing Yui or miyuki’s mini-game job or by reselling your fishes and bugs catch to Suzuka, the animal survey girl, after the 21st day.

After finishing the game for the first time you will unlock the Memories mode. This mode is a sandbox that allows you to replay the events, scenes and pictures you unlocked during your play.

Each girl (Yui, Rio and Miyuki) has 2 bars each:

Each girl also has s*x statistics represented by 4 additional bars that appear instead of the house map when you talk to them.

Satisfaction increases by as many points as the amount of lust points spent during s*x (see lust) and is reset once s*x is over. At 100 points, the girl offers you an object.

If you sleep with a girl whose 3 H-status bars are at 200 points, she will wake you up with a blοwjob.

The vertical bar is the noise bar. When the player have s*x, he can vary the intensity of the act. The higher the bar rises, the more noise the character makes, which increases the level of vigilance of the people around. A bomb icon appears next to a character whose vigilance level is above 70. If the vigilance level rises to the maximum (max. 100), this character will enter the room = Game Over. Sleeping with a girl decreases her vigilance by 5.

Once you can have s*x with Rio and Yui, the goal is to maximize each other’s Vigilance. She will then enter the room and begin a thre*some.  WARNING: Have s*x with someone decrease the Vigilance. Also, doesn’t matter if you have s*x with Miyuki, If she find you to have s*x with her daughters = Game Over.  – Also, lock the end for the “Thre*some Memory” ending.

Once the Thre*some is unlocked, the goal is to do the same thing as the Thre*some but with Miyuki.  BE CAREFUL to the vigilance of the uncle who can still do Game Over.  – Also locks the end for the “Foursome memory” ending.

Every Sunday (7th, 14th, 21st and 28th day) the family organizes an outing.  Depending on your affection progression with girls, you can attend special events.  The chosen girl wins +5 affection.

*Miyuki’s toilet mini-event: Appears when you cυm in your pants. One day Miyuki will talk about your pants’ accident. When Miyuki’s affection is high (>40), if you ask her to sleep with together the evening another choice of dialogue may appear: she will ask you if you want her to clean you.

*Throwing a coin in the cave increases the chances of dropping a rare object.

If you throw 20 coins in the cave box you will unlock a red button in the living room in the memories mode. Clicking on it unlocks all the events, CGs and memories. 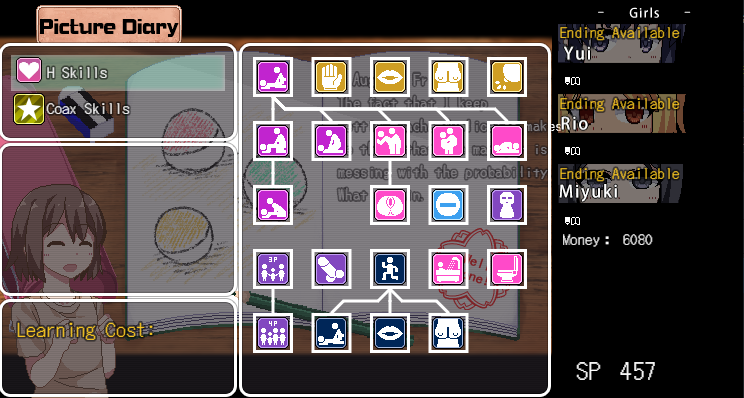 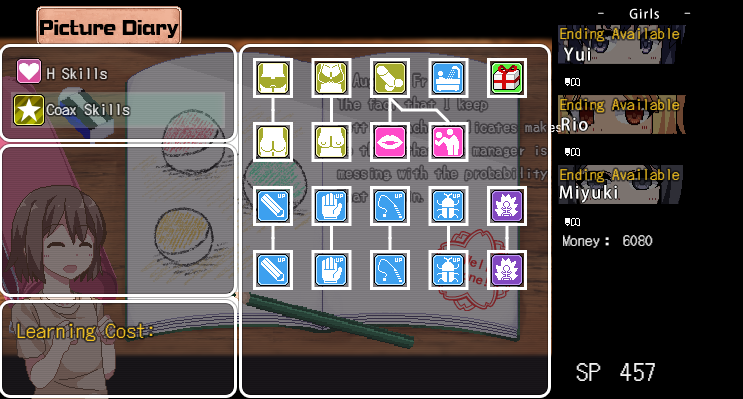 All items (except those whose effect indicates it) offer +2 affection to Rio, Yui or Miyuki when offered. (Limit: 1 item/day/girl)

Unlocked the Thre*some skill, this end is automatic.

Unlocked the Foursome skill, this end is automatic.

Finish chosen subheroine’s side quest. Replay the s*x scene to unlock new actions (Talk, Coax, Item, S*x). At this point, when you talk to the chosen heroine, a yellow text indicating affection appears. The default value is 40 and like Rio, Yui and Miyuki, blocks itself every 20 points (60, 80 then 100) and unblocks itself after a s*x scene that starts randomly during the day. After playing the 100 affection points scene, on the last day the hero will have the opportunity to make a last trip to the city to get their envelopes back.

The mini-game unlocks after you buy a Menko from the candy store.  > Talk to the groups of players present, to start the mini-game, select the Menko you want to use. Challenge the group 4 times and the boy disappears.  > The next day or two, go to the night square to talk to the boy.  > The next day, the group of players is there again. Challenge the boy again 4 times.  > A few days later, a pro player appears in the square. Choose to team up with the boy to beat her (during the mini-game, click on the boy when he appears to hit harder)  > After the fight, challenge Akari alone. You will lose.  > Challenge her again and win this time by kissing her (During the mini-game, click on her when she appears)  > Repeat until the s*x scene starts.

Present in the candy shop from the 1st day.  The quest starts on the 8th day, when access to computers (in the rooms of Yui and Rio) are unlocked.  > Use the PC (1 use/day) to go to DoItter and choose the commentary of your choice (doesn’t matter). Be alone in the room.  > Repeat until you receive a n*de picture from ZRIN (around the 3/4th use).  > Continue to use the PC every day until you receive a photo with a teddy bear (3rd n*de).  > Go to the candy store and click on the teddy bear.  > The next day, by going to DoItter, you will learn that ZRIN does not want to take any more photos. Go to the candy shop and talk to Shizuku to start the s*x scene.

Appears in the mountain from the 15th day.  > Sell her 1 fish and 1 insect of each rarity (Rarity ranges from 1 to 4, so bring her a total of 8 animals, the species doesn’t matter). When it’s over, the s*x scene begins.

Appears in the creek, next to the beach, on the 18th day.  Mini-game consumes 1 bait/parts.  > Talk to her to learn that she’s looking for all five parts of an underwater treasure.  > Once the mini-game has been successfully completed 5 times, the s*x scene begins.

A picture diary has been added to the title screen. This option allows you to see all the unlocked illustrations during your games. There are 93 different illustrations.    >> The memory drawn in the journal is the activity that generated the most memory point during the day.    The order of priority of the contents described in the picture diary is as follows:

Entries 35 must be confirmed.

Hope you enjoy the Guide about Summer Memories – Guide (Expansion DLC update), if you think we should add extra information or forget something, please let us know via comment below, and we will do our best to fix or update as soon as possible!