Most vehicle have a simple and easz to under stand reticle that tells zou which ammo flies where. However some do not exactly display it right.

Infantry weapons have their scopes mounted above the barrel, thus distance only require offsets in one direction to compensate for the ballistic curve.
Armored Vahicles however, often gave their sight offset to the side as well. Whereas in the distance compensating means lifting the barrel, most targets within 500-600m require a side offset as well. This is displayed in most reticles by a curved line. However, some are not totally accurate or display more than needed.

The first IFV in SQUAD, has one of the easier Reticles to use, IF one fires AP and HE above 400 , 300 meters respectively. I is to be noted that only the right lines are relevant 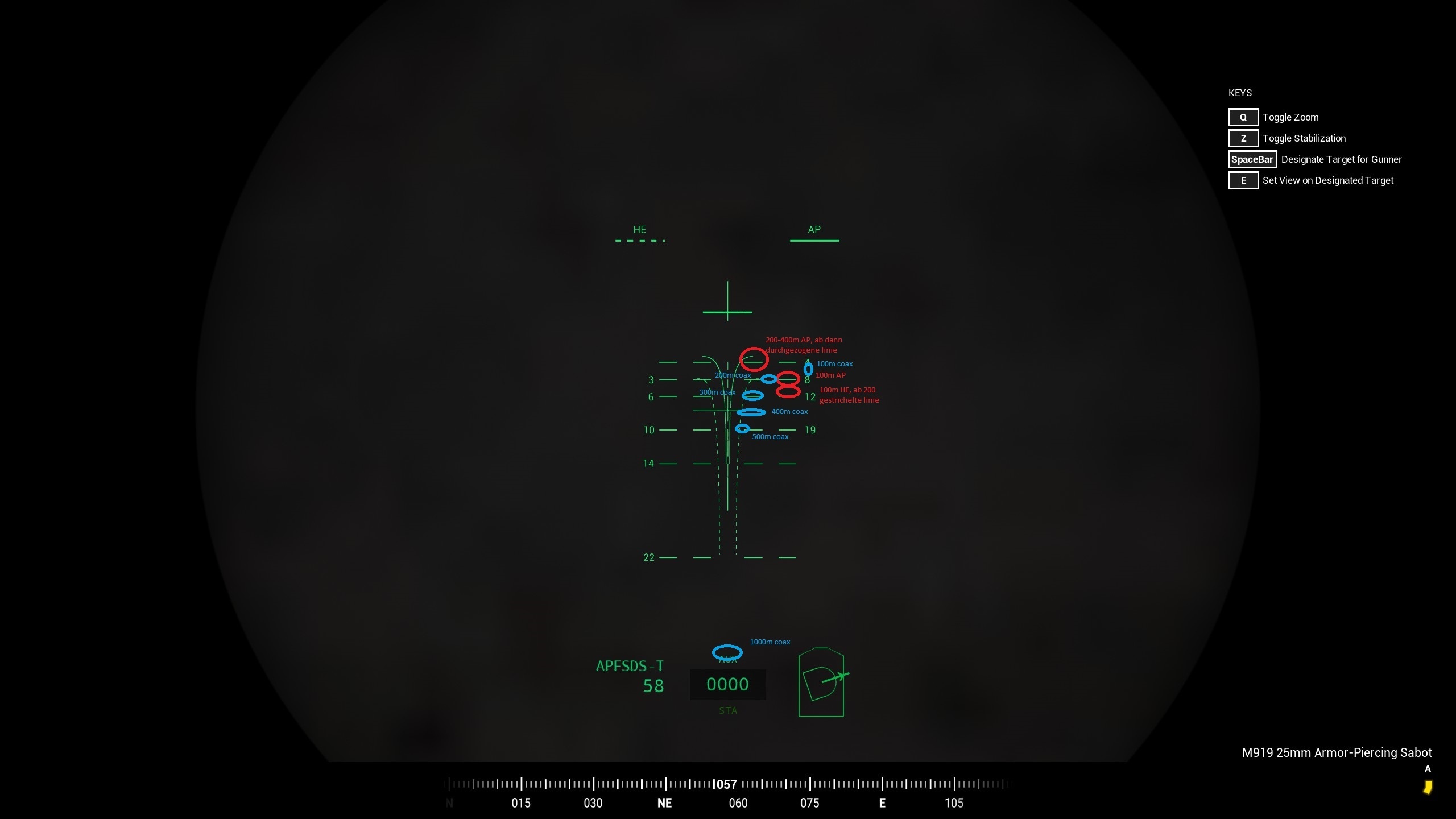 Under 400 meters usually the tip of the line can be used. However, 100m AP is landing by the single line next to the 8 refering to 800m AP. Right below that the 100m HE will land, just above the right most line annotating the 1200 m AP.
The coax does its own. 100m coax is aimed between the 4 and the 8 of the AP distance numbers.
200. is between the horizontal line fot 800m AP while 300m coax lands on the right inner 1200m AP line. 400m coax is on the center line right side past the HE line while 500m coax is somewhere between the HE line and the inner right 1900m AP line. Finally the 1000m coax is down just above the AUX letters and the rangefinder.
Draw an Imaginary line similar to the existing lines for all distances in between.

So far during tests, the FV510 has only two markers: The 100m AP which hits where the right 2 from the 200m AP marker is and the 100m coax which hits on the right horizontal line of the 800m AP marker. On a sidenote, while the scope can measure a BMP up to 2400m away, actually shooting that far requires aiming for the sky literally. 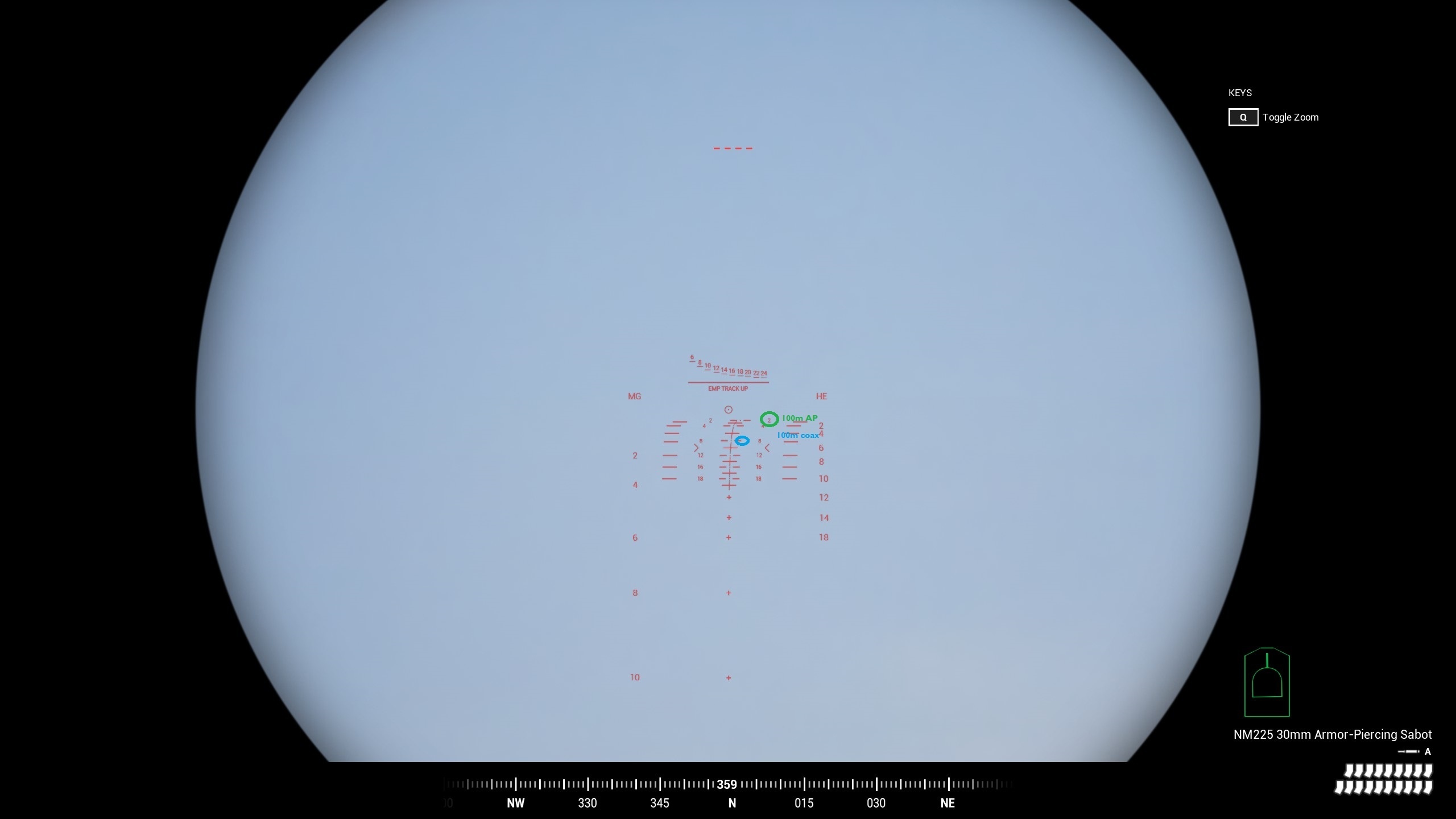 The FV107 has a very slim reticle and uses only one dot line for all weapons. 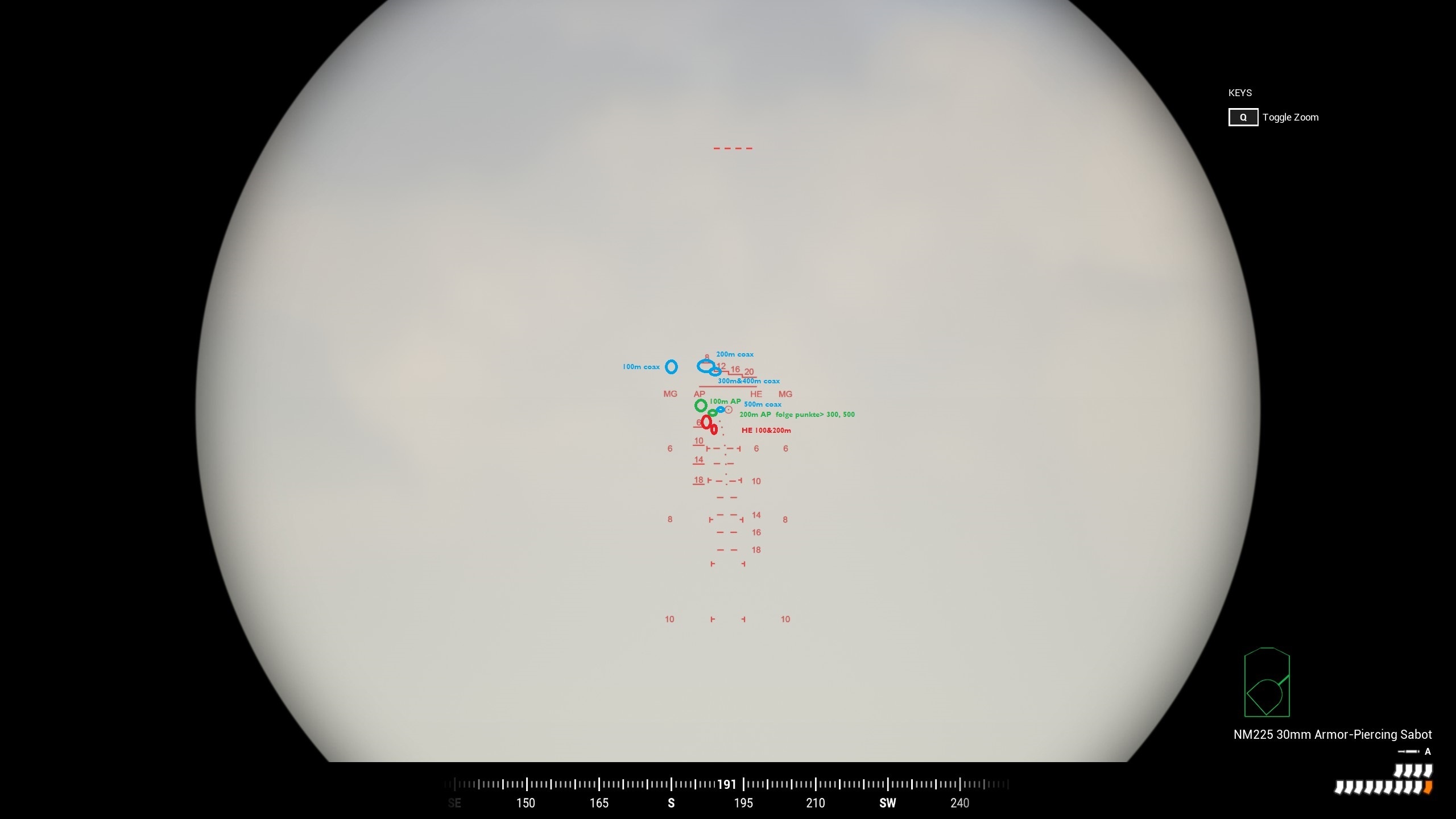 coax on ranges below 500 are not even inside the reticle, but above the MG characters and the distance measure scale (correct for actual name). In that scale the 800m measure is the 200m coax, while the 300 and 400m coax is on the left corner of the 1200m measurement. 500m coax is just left of the circle.
100. and 200m AP is found by continuing the dotted line uo to just below the AP sign, with 200m being jsut up right on a 45 degree angle from the 6 from the AP scale.
100. HE ist just right from the same 6 with 200m being a little lower and to the right of that.

Hope you enjoy the Guide about Squad – Vehicle Reticle Guide, if you think we should add extra information or forget something, please let us know via comment below, and we will do our best to fix or update as soon as possible!