In this guide, I’ll tell you what Spellbreake is, what game modes exist, character classes, in-game items, orbs, and add-ons!
After reading this guide, you will understand the principle of this game!

SpellBreak has four game modes! Let’s go through them! (You can see all the modes below)

1. Training – this mode appears according to the rules at the very beginning of the game, but any player who does not understand the gameplay can immediately re-pass the training. The training can be completed an unlimited number of times. In this mode, you will learn: the essence of the game, gameplay, classes, items, and co-op.
2. Training – This mode was designed to hone the skill in SpellBreak, but many players use it just to have fun. In this mode, there are: several bots (to improve the aim), unlimited items (all runes of different rarities and all gloves of different rarities), five or six spheres (we’ll talk about the spheres a little later). The only disadvantage of this mode is that you can’t play co-op.
3. Clash is a battle of teams, where nine players fight against nine and the winner is the one whose team has earned the most points. Points are awarded for defeating a player. The game is played in a limited amount of time.
4. Battle royale is a classic battle royale where the winner is the one who takes the first place. There are 42 players in the battle Royale, the game can load from 2 to 5 minutes. In this mode, there are three more sub-modes, let’s go through them again:

TIP: IN ALL GAME MODES, YOU DON’T TAKE DAMAGE FROM FALLING!

The game has six character classes. It Is: A Storm, A Northerner, Conductor, Viatel, The Pyromancer, A Toxicologist. Each class has its own ability that cannot be used by a completely different class. Each class has 4 power levels. In this tab, I will tell you only about the first one, you can find out about all three yourself. Let’s go through the class in more detail:

1. Tempest – a class that is very mobile in the air. One hit to the floor and the player already seems to fly, but this class deals the least damage among all classes to the enemy. Hits this class with 5-8 damage. Together with it, you need to take a glove of a Pyromancer or Toxicologist, as they are more suitable for impact. Skambinau the power of the Storm and the strength of the Pyromancer, you can get a fire tornado, and if you combine the power of the Storm with the power of the Toxicologist can get toxic tornado, if the Conductor mainostaa tornado! I do not advise you to take the glove of Sereryanin and Winnower as they will not help in case of danger. Rune is better to take either teleportation (as you can easily catch up with the enemy, who tries to escape from You) or flight(it will help stop you or move away from the storm), in an extreme case, I advise you to take a feather(feather is not quick, but high. It is a feather that can save you from death in some moments) 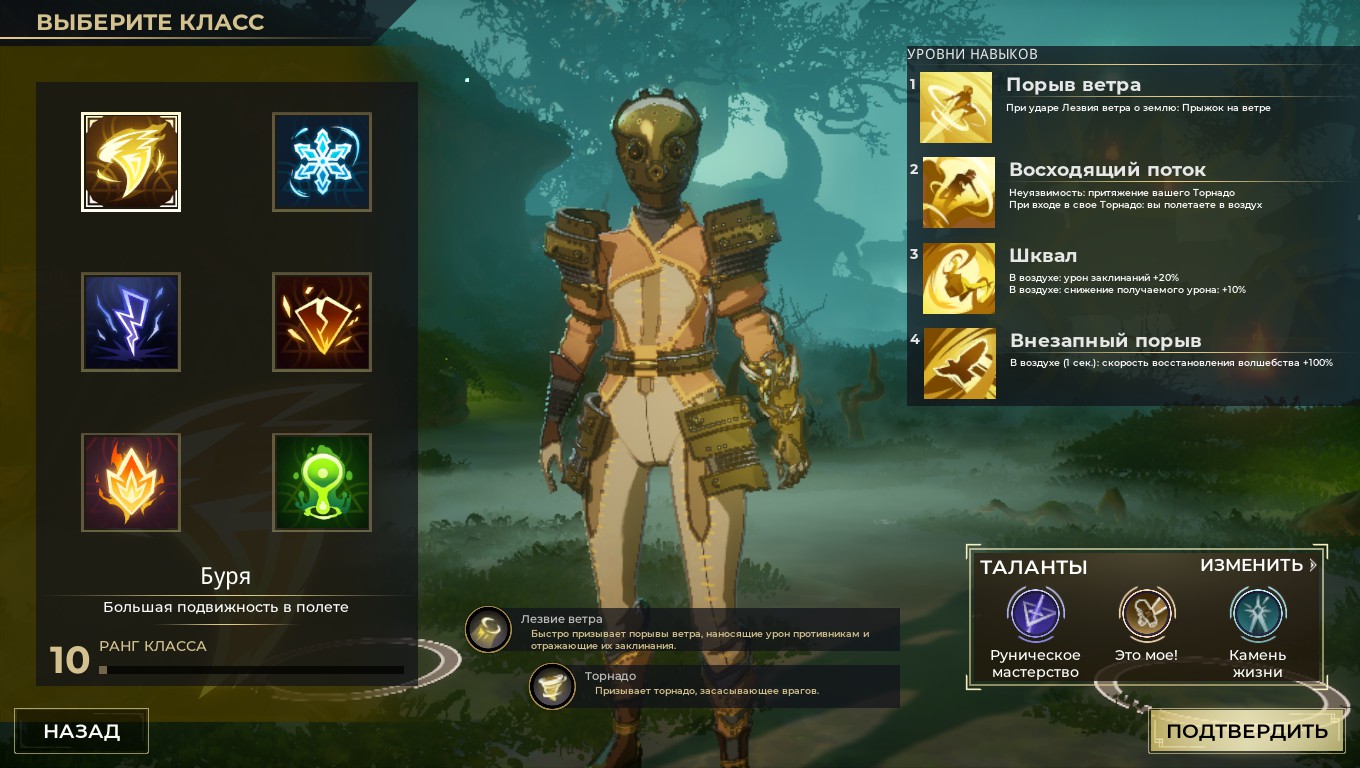 2. Northerner – the class that deals the most damage. The Northerner deals 80 damage to either the head or the body! He is very fast thanks to his ability! His main weapon is a bow. Bow-which sees the opponents (the opponent is highlighted in red until you remove the bow). If he launches his arrow, then there will be an ice path under the arrow, along which you will move 100% faster than usual. But this class is quite difficult because you will have to constantly aim and be on the move if you are noticed. With a Northerner, it is better to use the Fan’s glove. Since you will need to give more domaga on the ground. And using the power of the Northerner, you can freeze the enemy and throw a Fan ball at him. It is better to take the invisibility rune(since this rune will give you more advantage over the enemy or if you have little health with this rune you will heal) 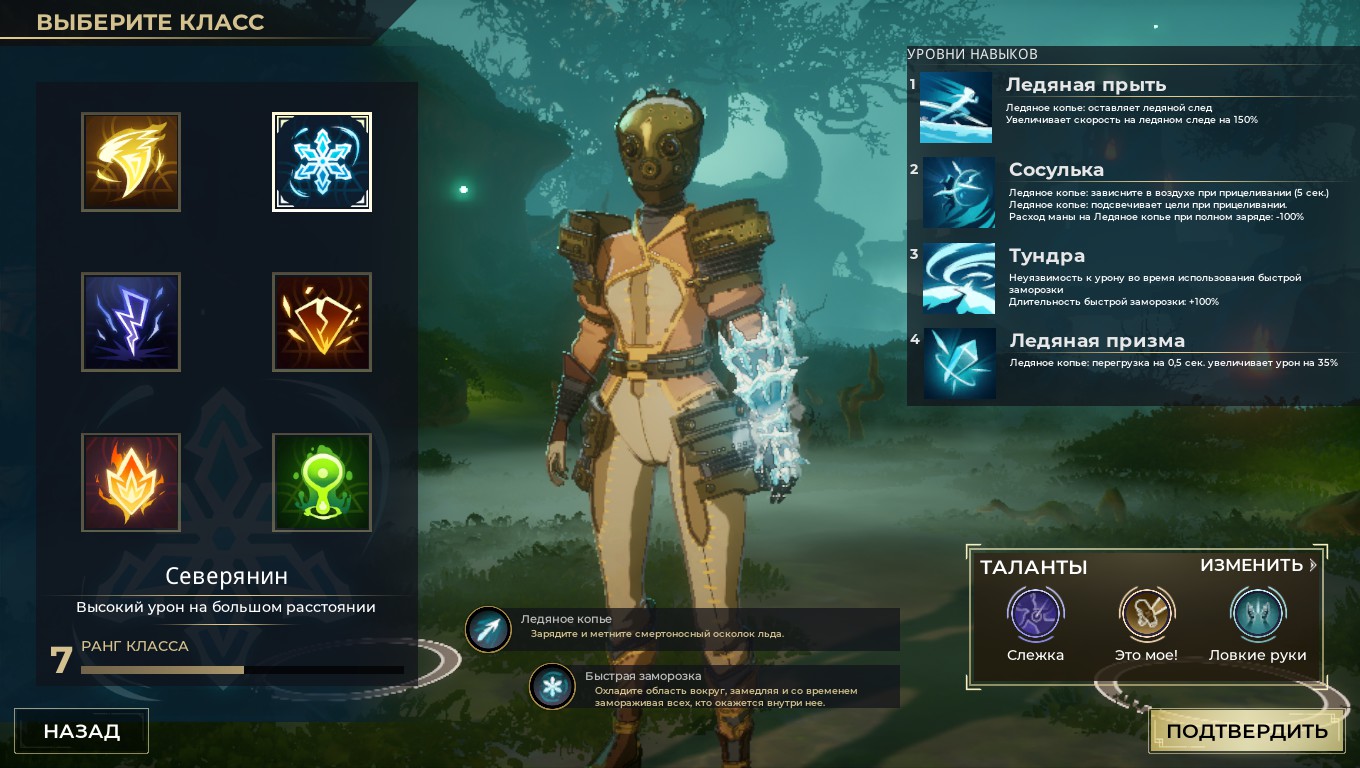 3. Explorer – a class that can quickly shoot by holding the attack button. It has a very high rune efficiency when shooting fast. Its main power is the accumulation of damage, if you hold the attack button, then with each shot, the damage will accumulate until the mana runs out. The maximum damage accumulation is five. Very good class. The Conductor is well combined with the Toxicologist because the power of the Toxicologist and the Conductor turns out to be a poison-lightning ball. Or goes well with a Northerner as if to combine strength Northerner with the power Conductor will molnenosnym-lebana path and opponents will not be able to go(it would help if You want to escape from the enemy), but here the point is that the path Northerner is his personal power, but how can we be? Then the add-ons that we will talk about in another section will help! It is better for the Guide to use the flight rune, the dash rune, or the teleportation rune! The main thing is mobility! After all, the storm, the players are all fast, but to catch up with them or escape from the storm, these runes will help you! 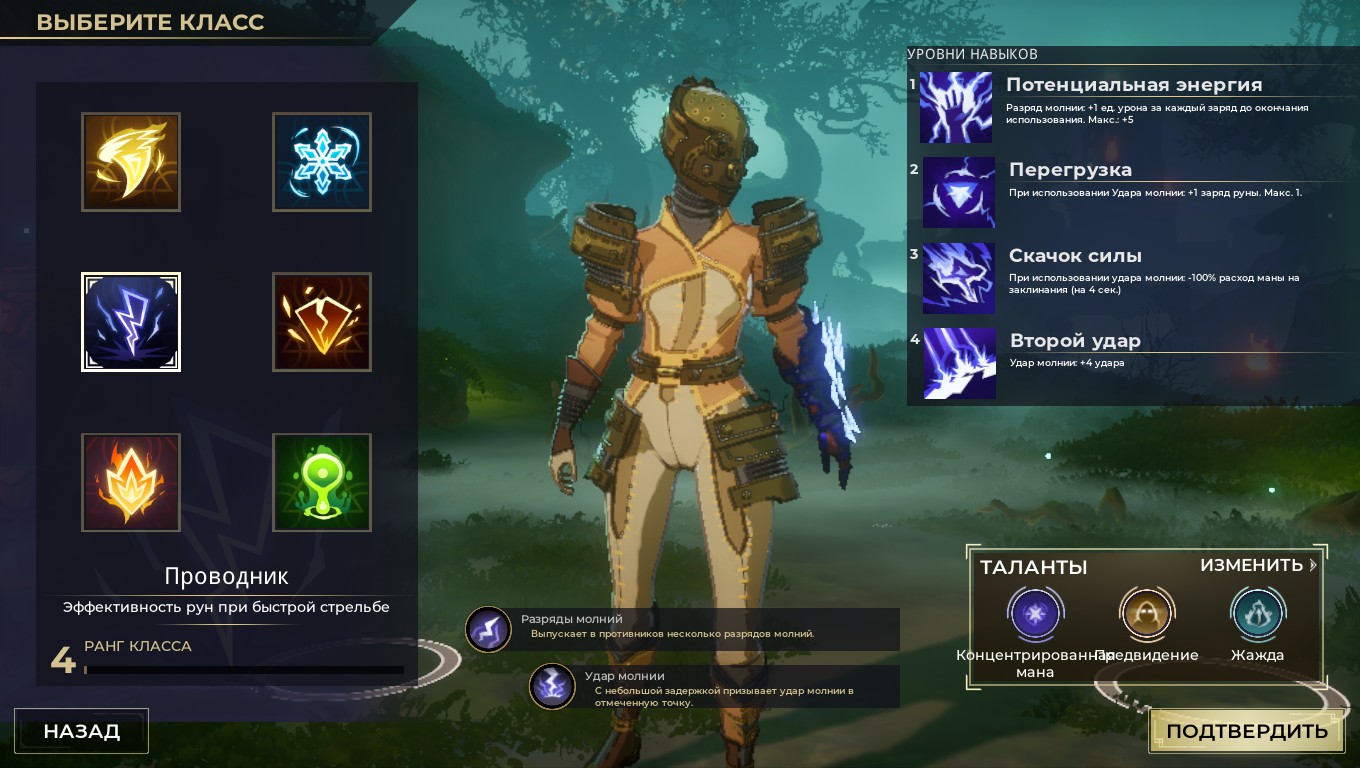 4. Fan – a class that deals damage on the ground. The Fan cannot be in the air and beat in the air (unlike the Fan, all other classes can do this). But the Fan’s attack deals damage over a huge area. His main strength is + 20 armor, but if the health is less than five, then the armor is added to five more. The Fan combines perfectly with the Pyromancer, as if the power of the Pyromancer with the Blow of the Fan is a fire stone that will deal more damage + set the enemy on fire! I advise you to take the rune of the jerk or shadow step for the Fan, so that it is more difficult for the enemy to defeat you. The damage of the Fan is thirty to forty health, thus enemies with a hundred health can be defeated in three strikes. And this is very cool! 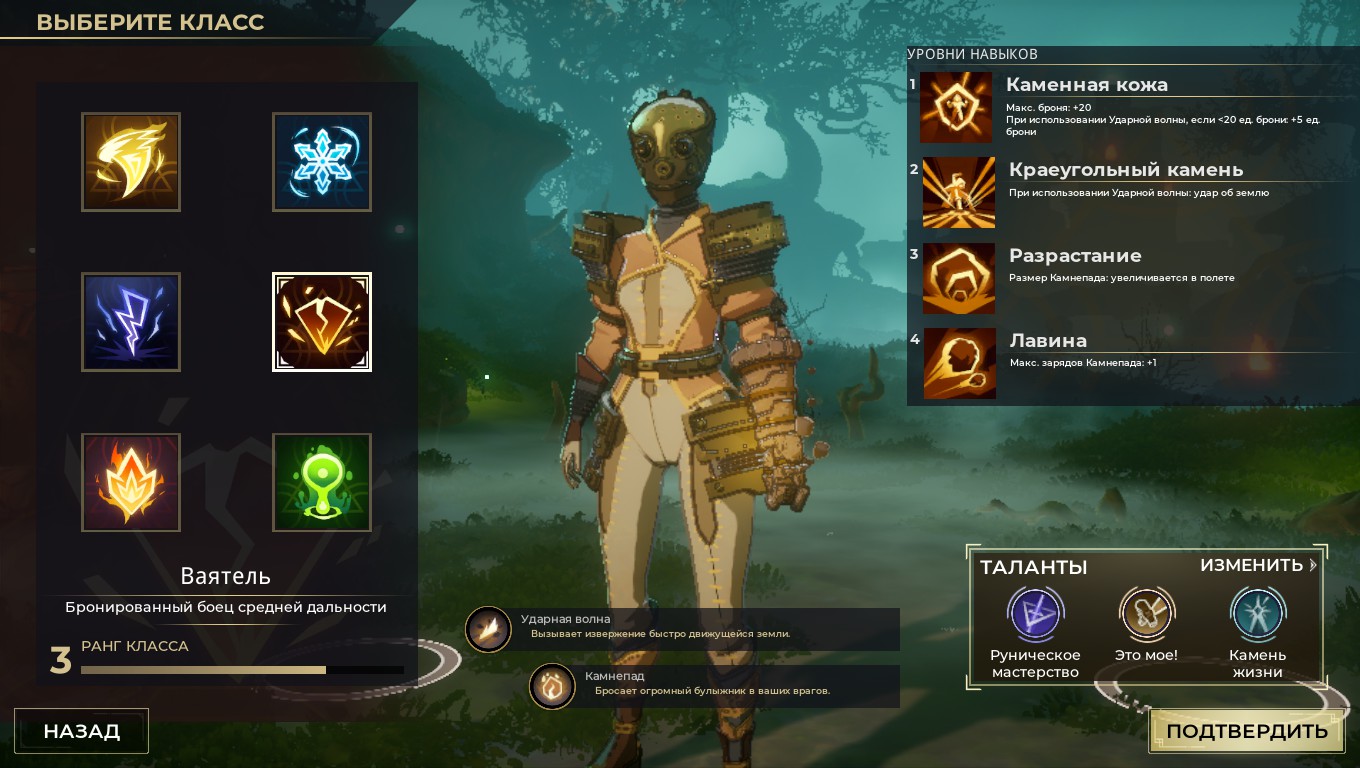 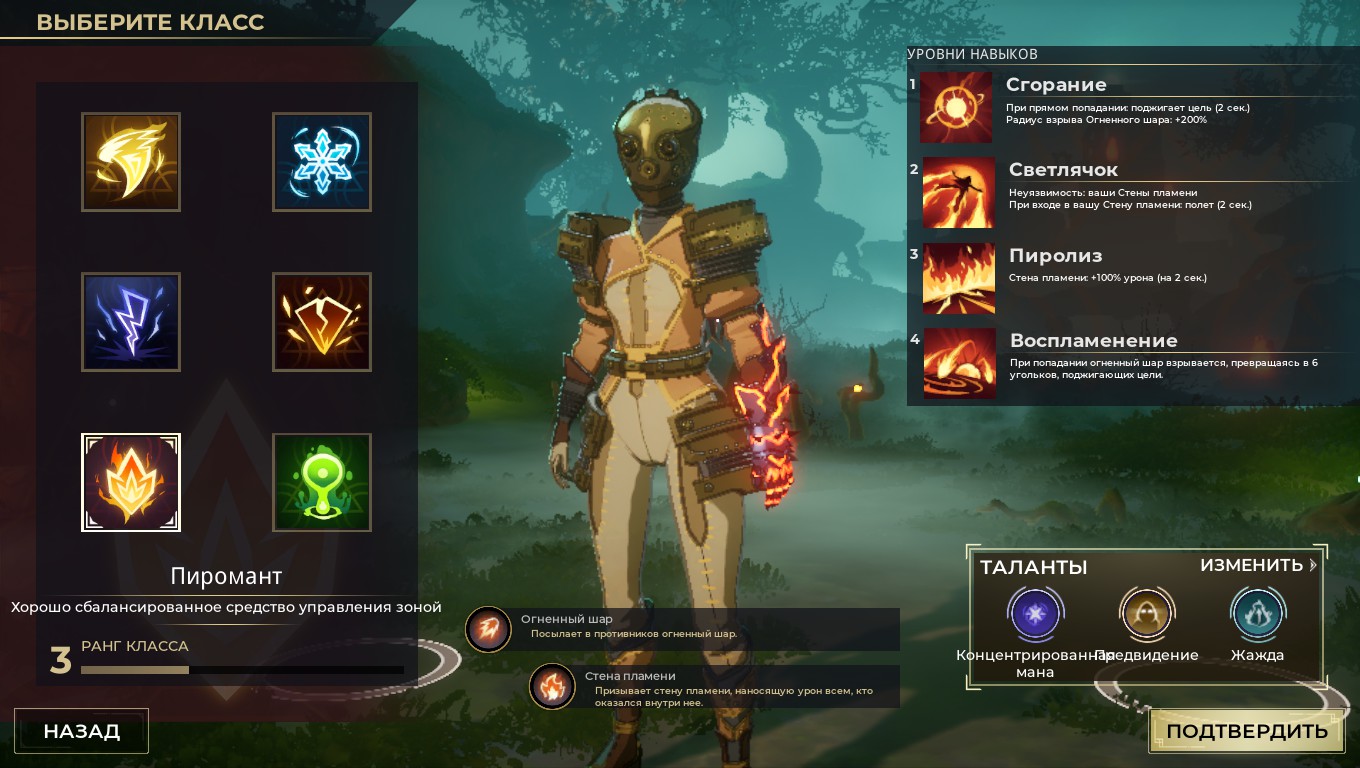 6. Toxicologist – a very unusual class, and unusual in that it is combined with almost all classes. His personal ability is poison.
– Poison?
– Yes, exactly poison!
– How does it work?
– Very simple!
You throw a blow to the enemy and pools of poison form at the place of the blow, which poison and slow down the enemy! This is not a Northerner to slow down the enemy! But it is still able to slow down and poison the enemy at the same time! And even more so, this class is suitable for almost any class!
"Why anyone?"
– Let me explain everything to you
Classes that match and combine attacks: 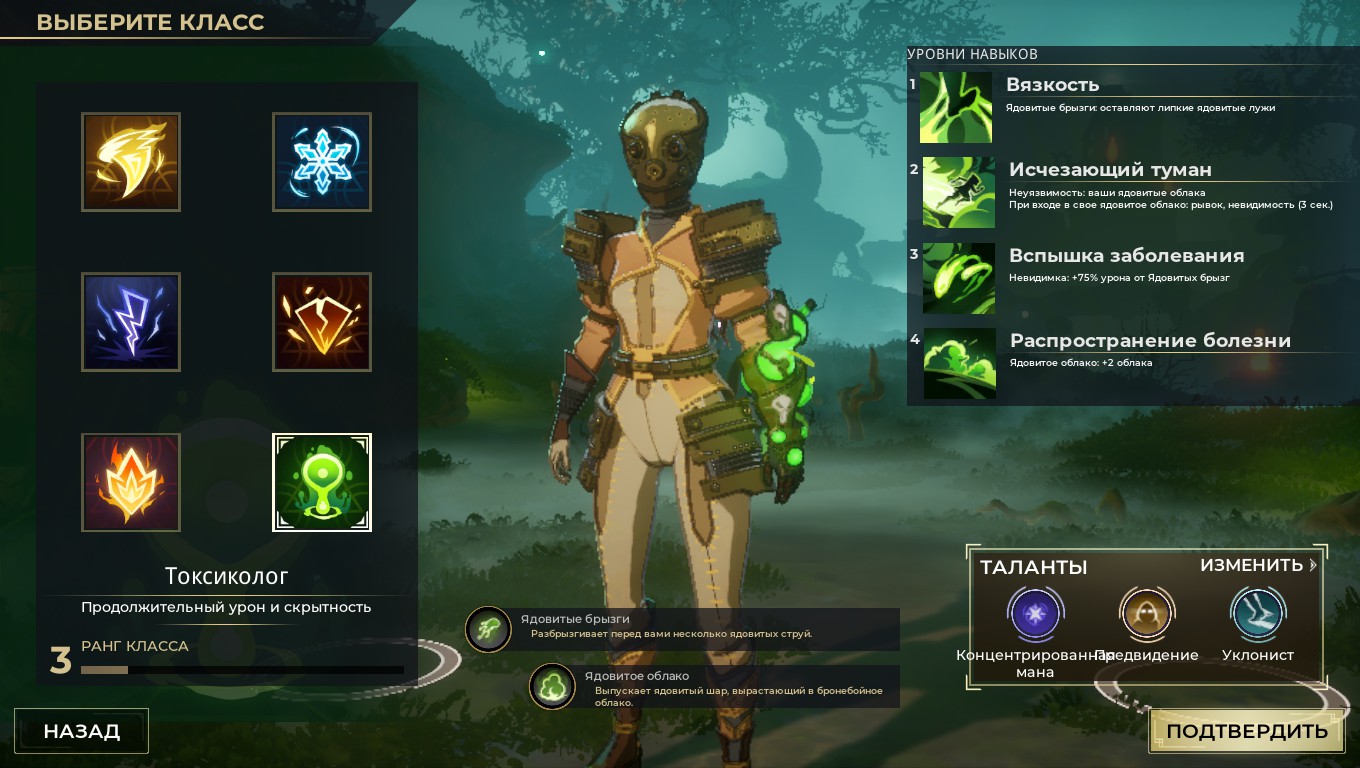 I hope you enjoyed it!

Items in the game

There are a lot of items in SpellBreak. 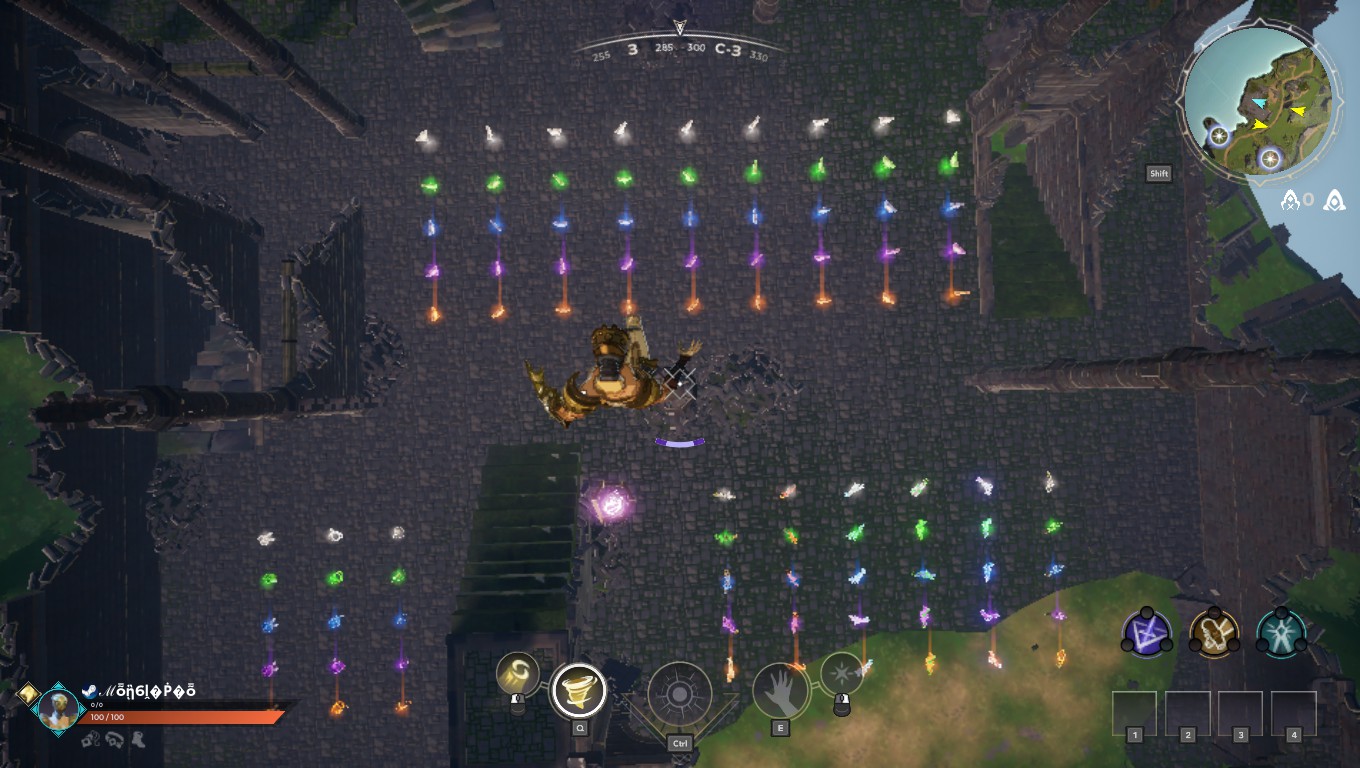 Non-essential items are boots, a belt, and an amulet 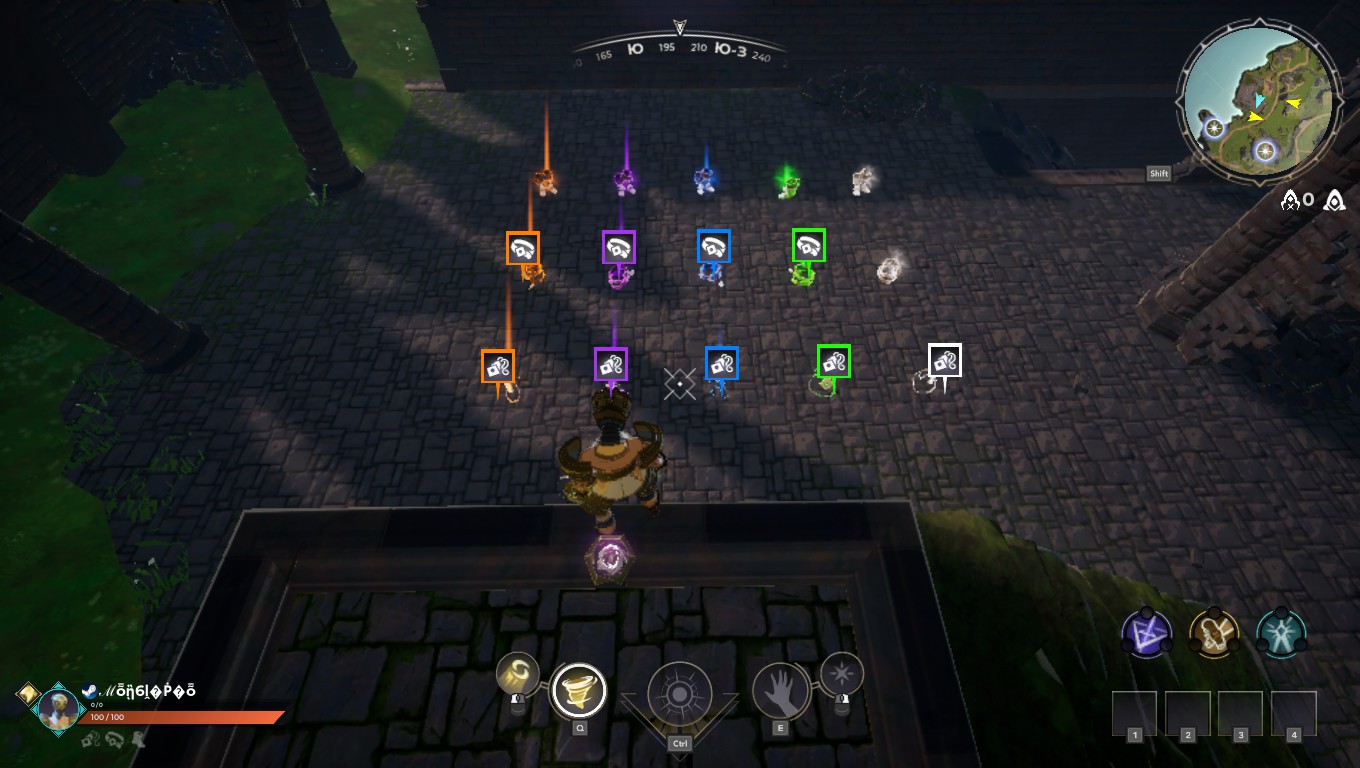 Every non-core item has exactly the same rarity as the main items!

Spheres – blue-a transparent dome that can be activated. 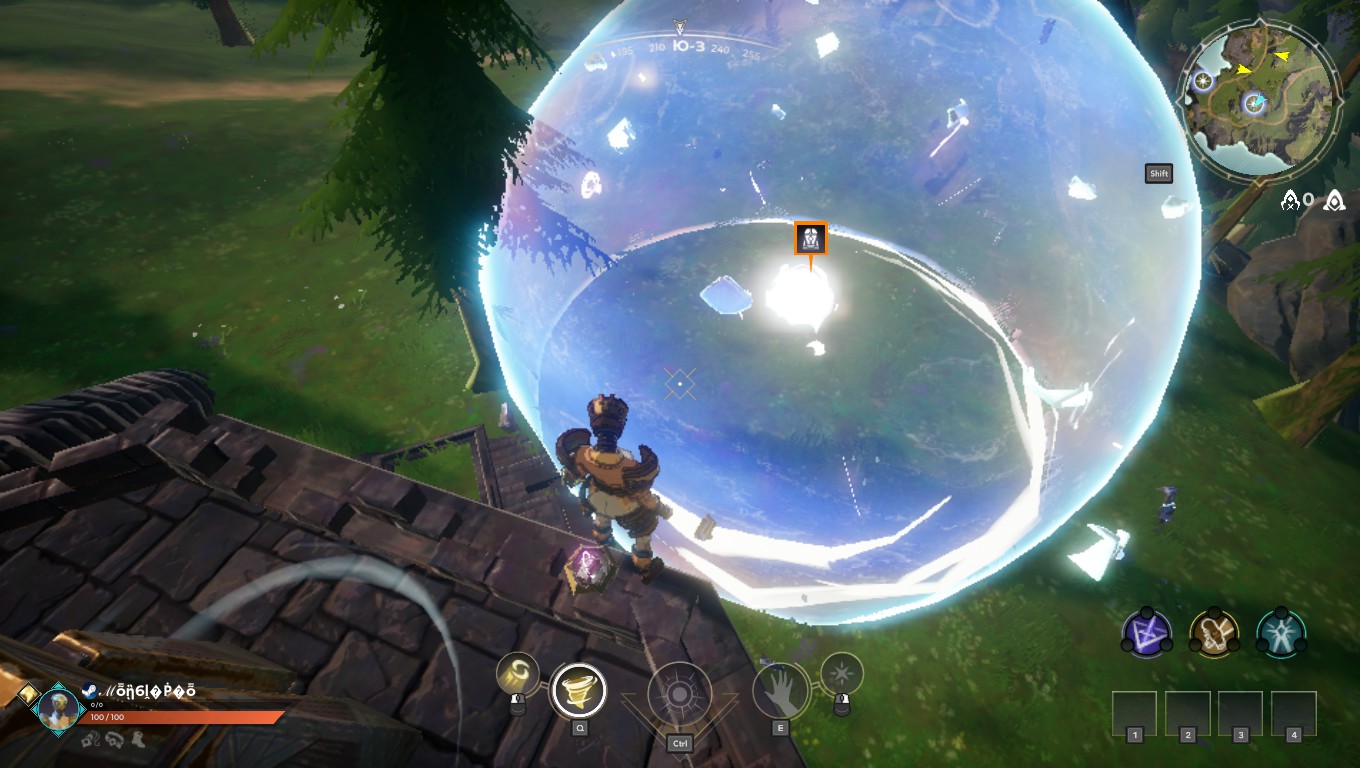 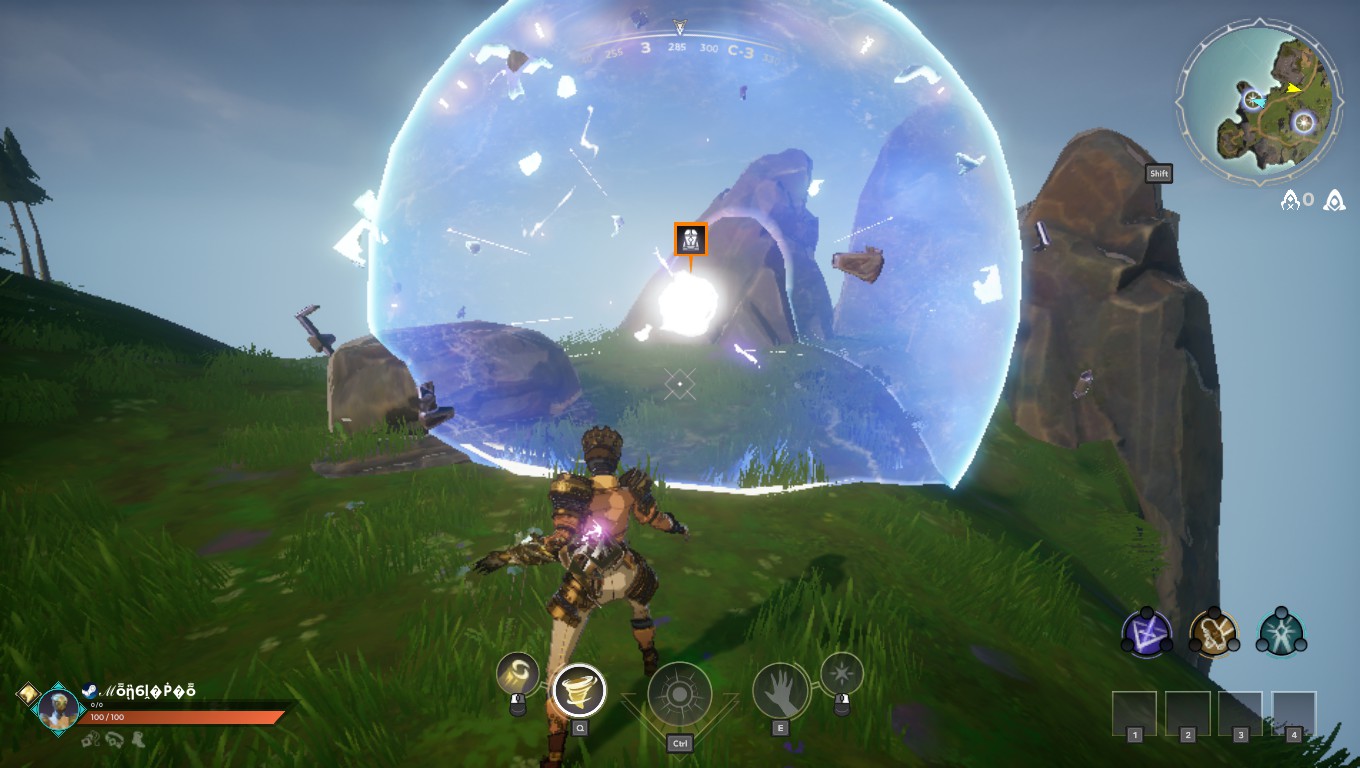 Different things can fall out of there. List of things that can fall from the spheres: 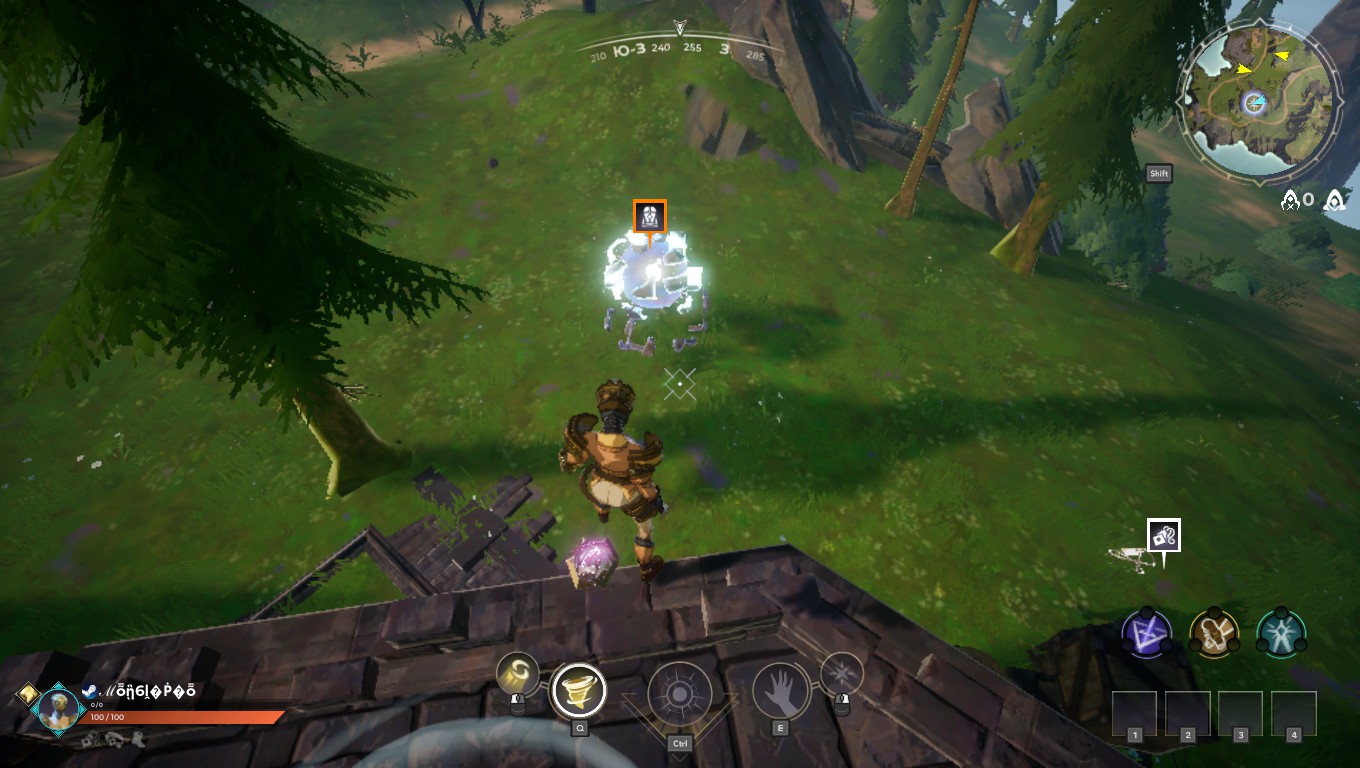 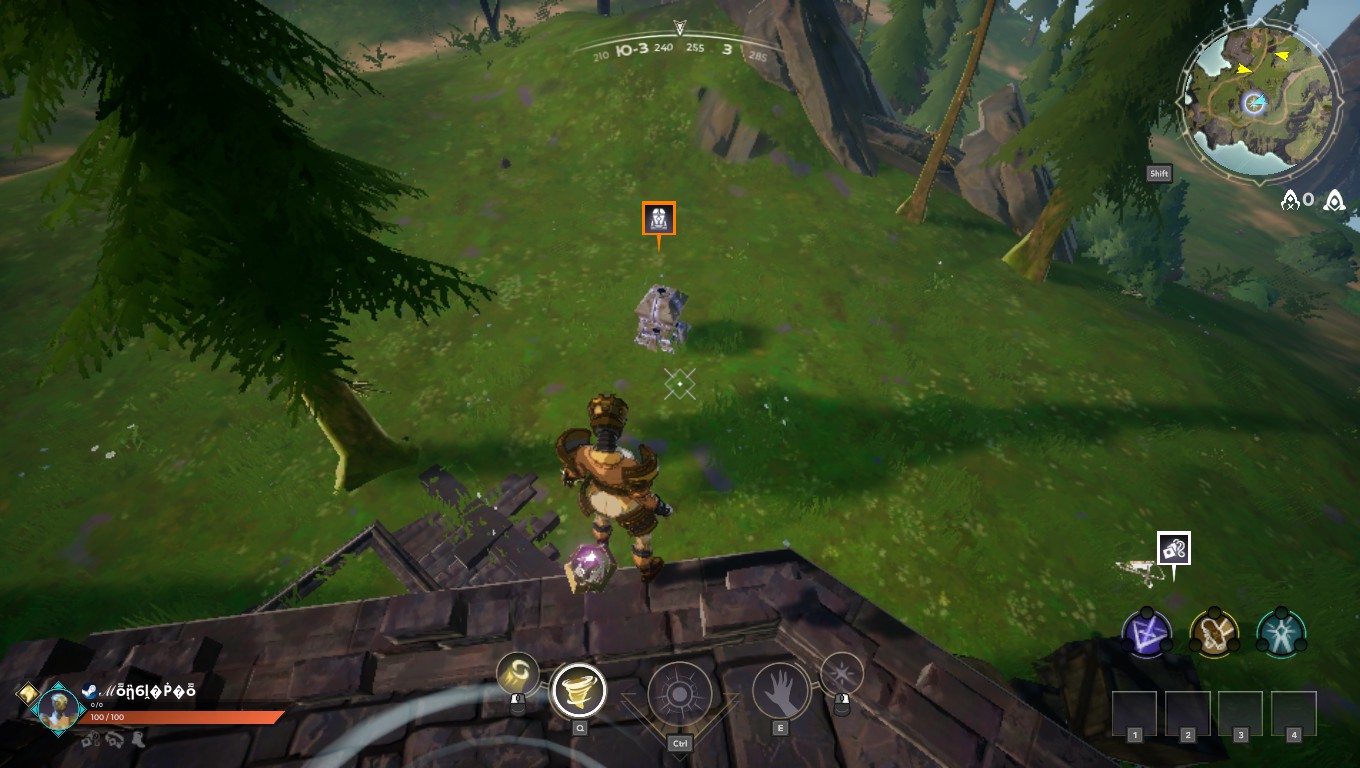 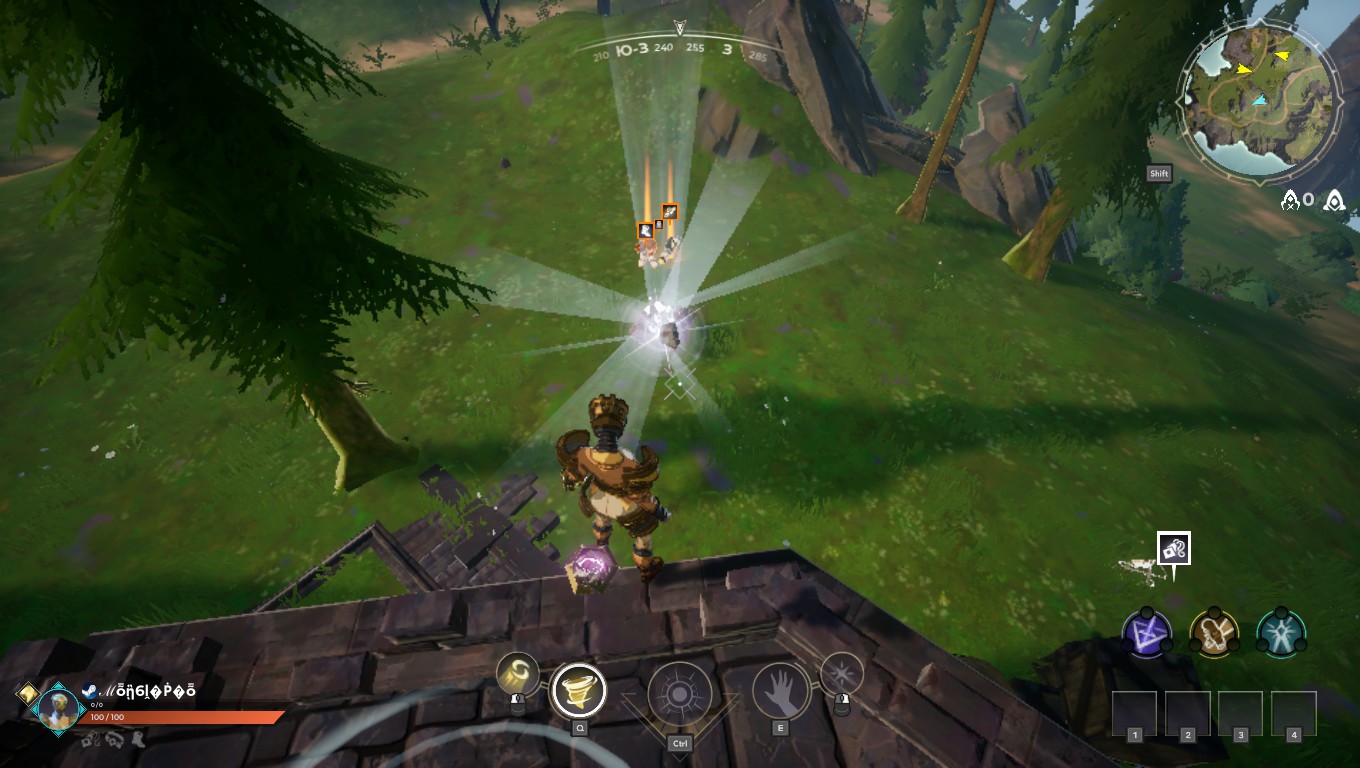 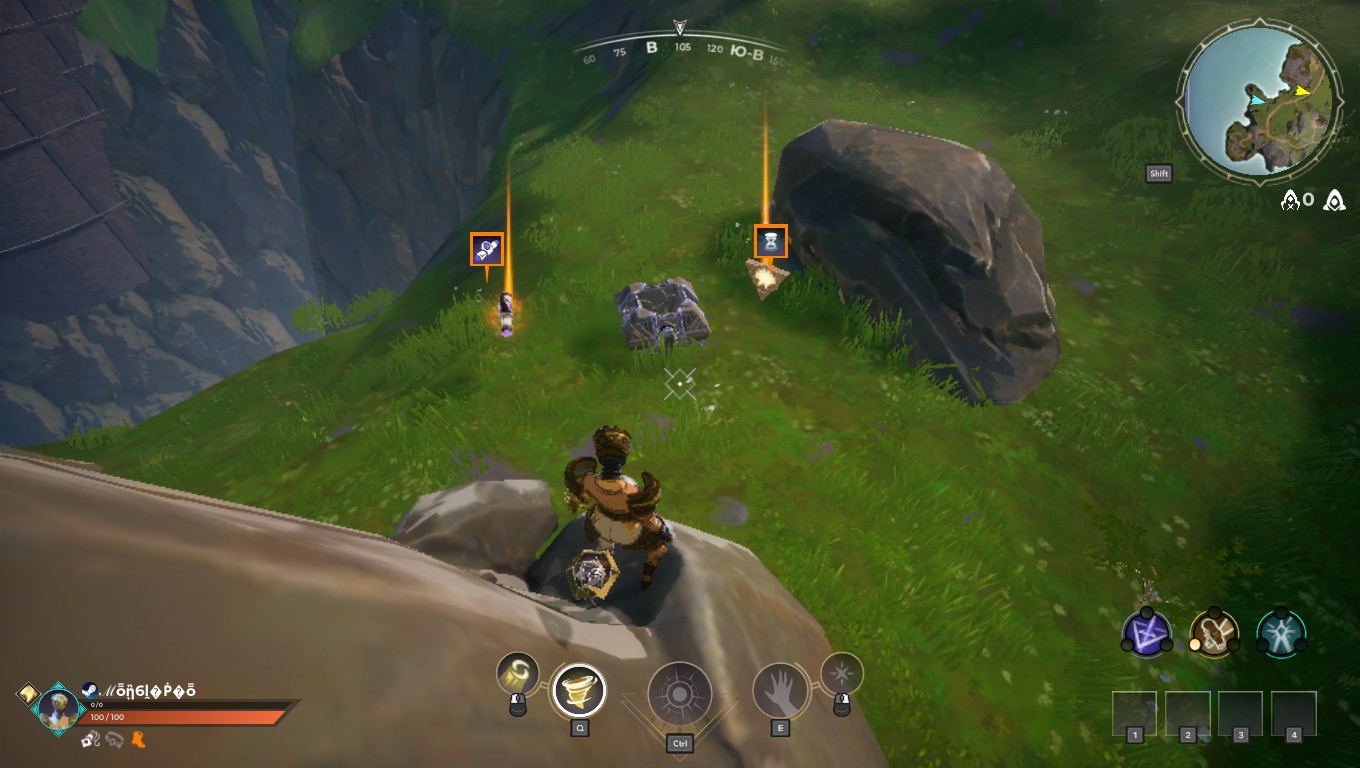 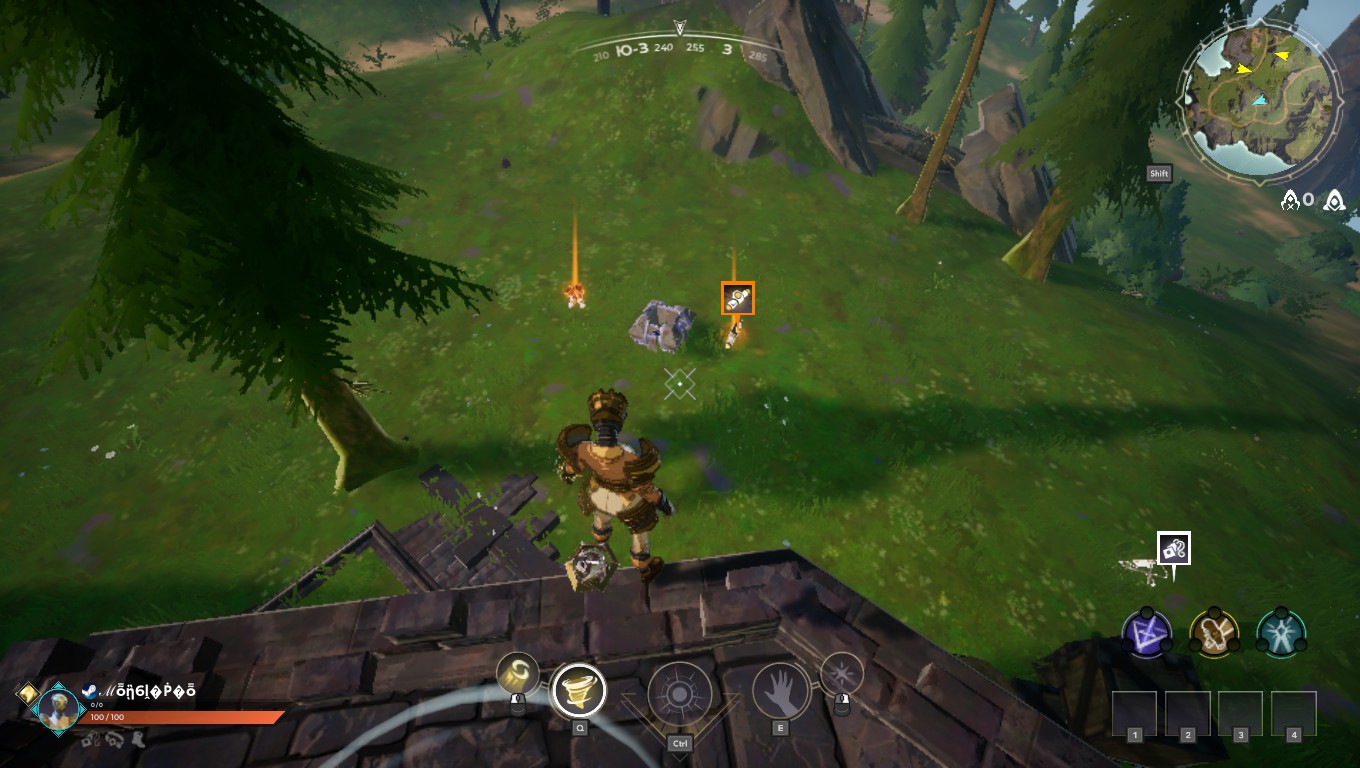 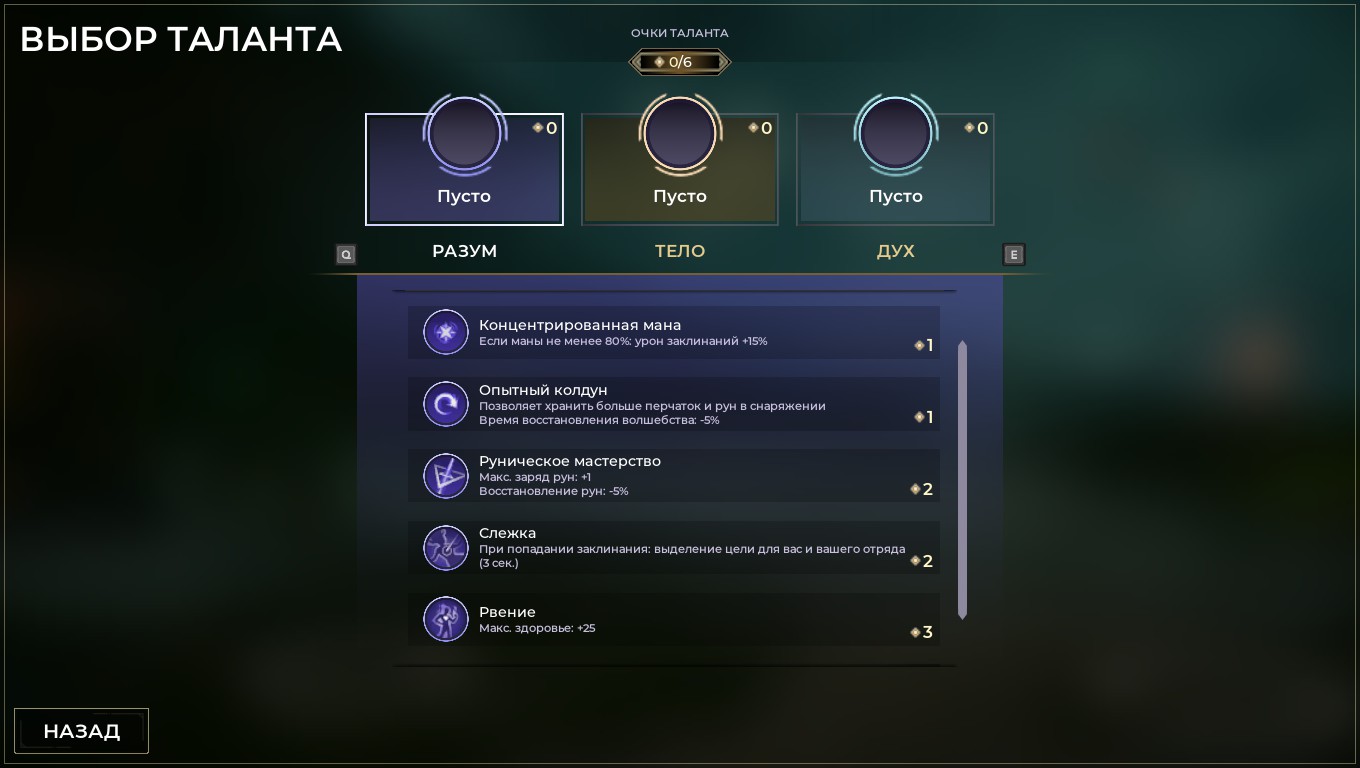 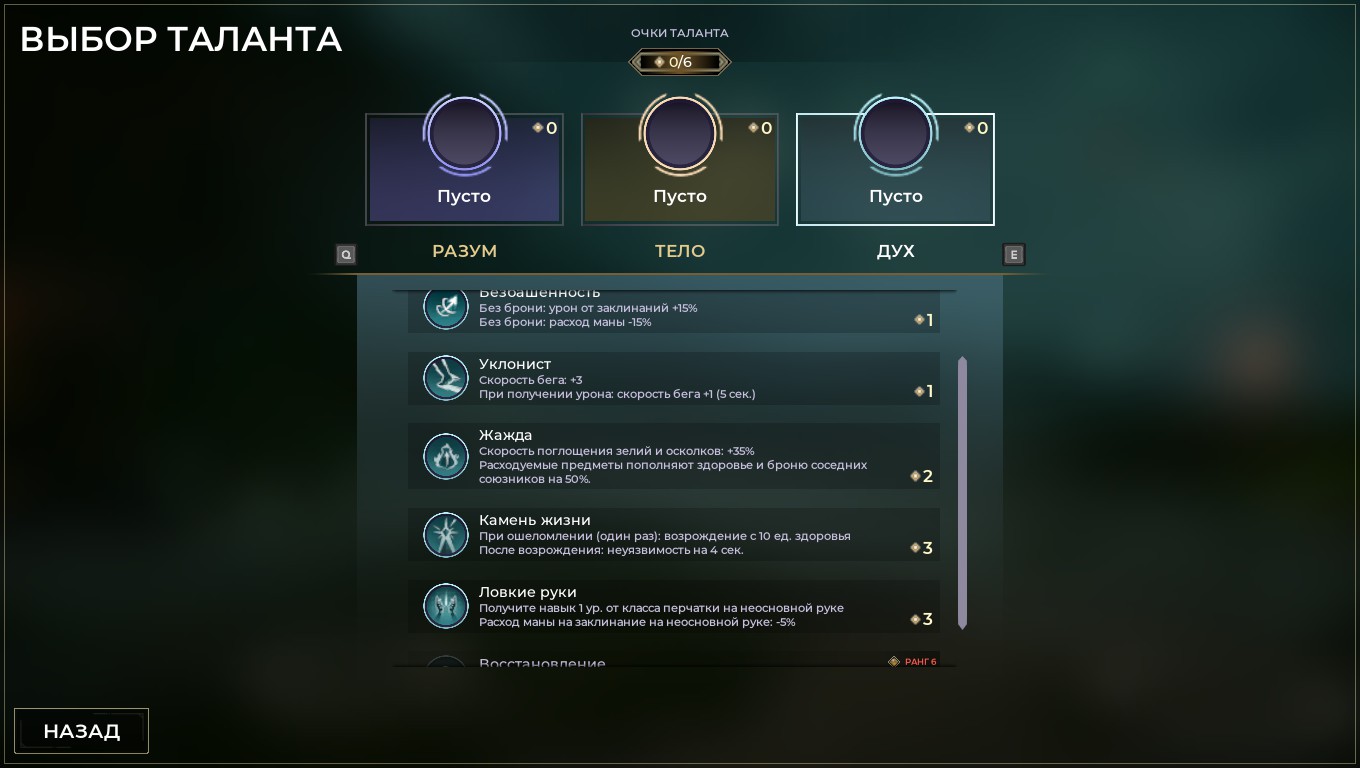 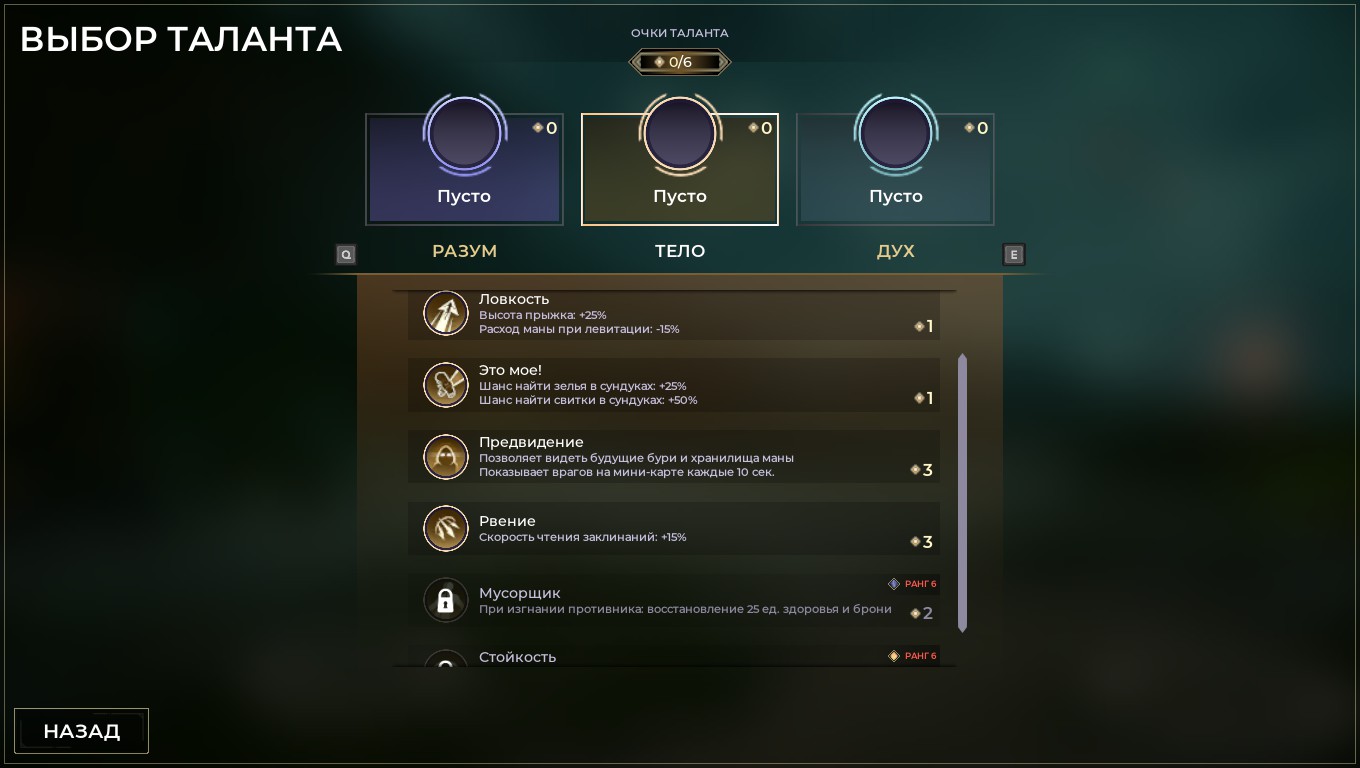 The battle pass can be obtained virtually for free! There is one life hack that I will tell you today!

A battle pass is something that you can buy ((donate) in many royal battles, you have to donate for a battle pass or play for a very, very long time) 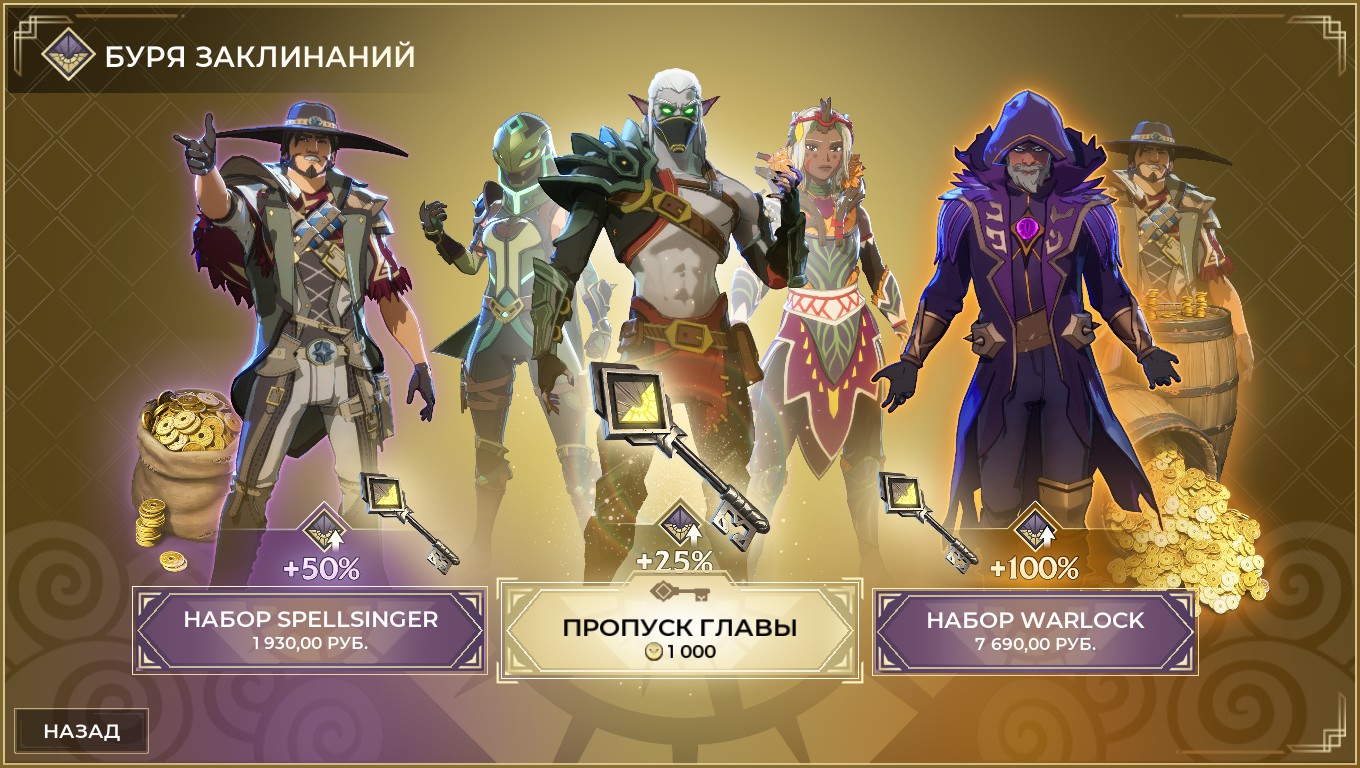 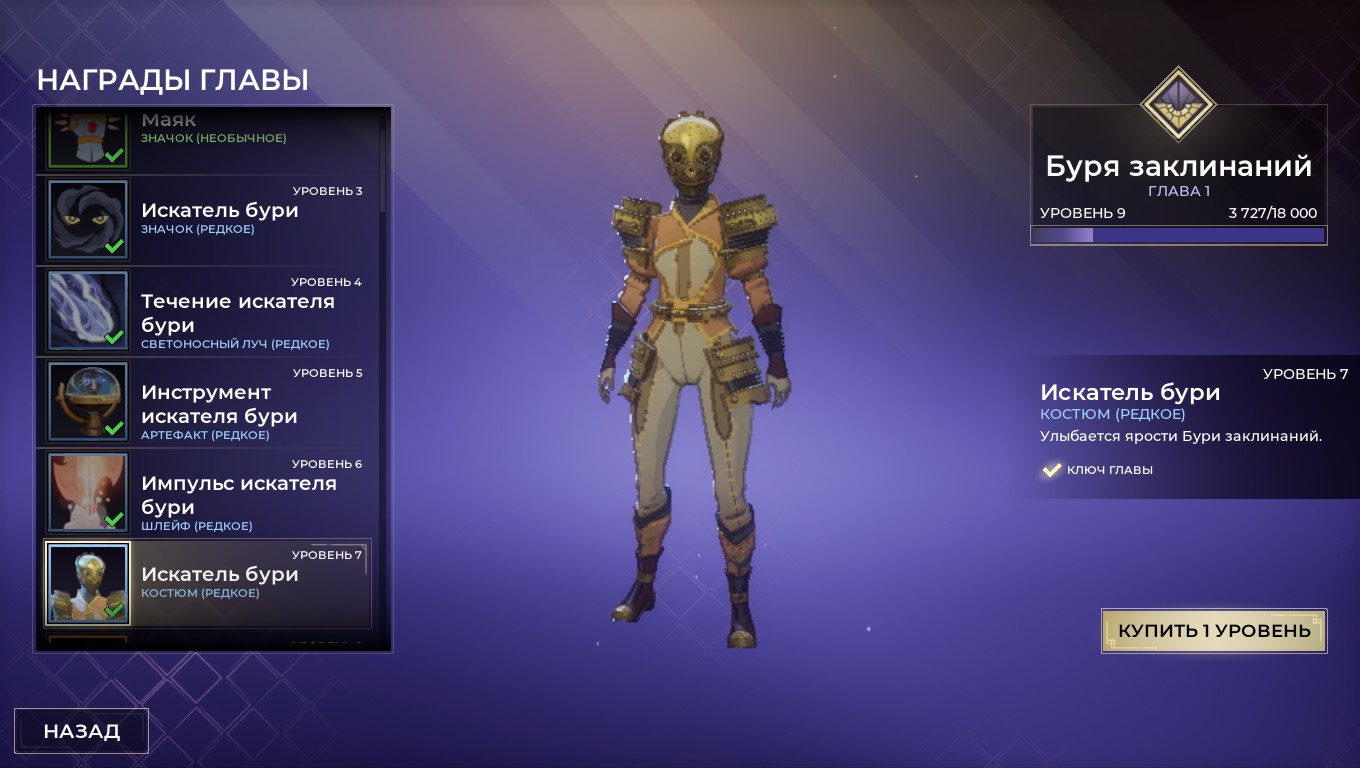 I haven’t found any other solutions yet, but I’m looking for something that would get a combat pass for free. Of course, it is impossible to sit, do nothing and get a battle pass for free! At least you need to work hard! But I’m on the lookout for how to get a battle pass in an hour or 25 hours! As soon as I find a way, I’ll tell you right away!

After playing for forty hours, I saw one bug and one feature (the list of bugs and features will be updated!)

This is what the bug looks like in the Battle royale, Solo match: 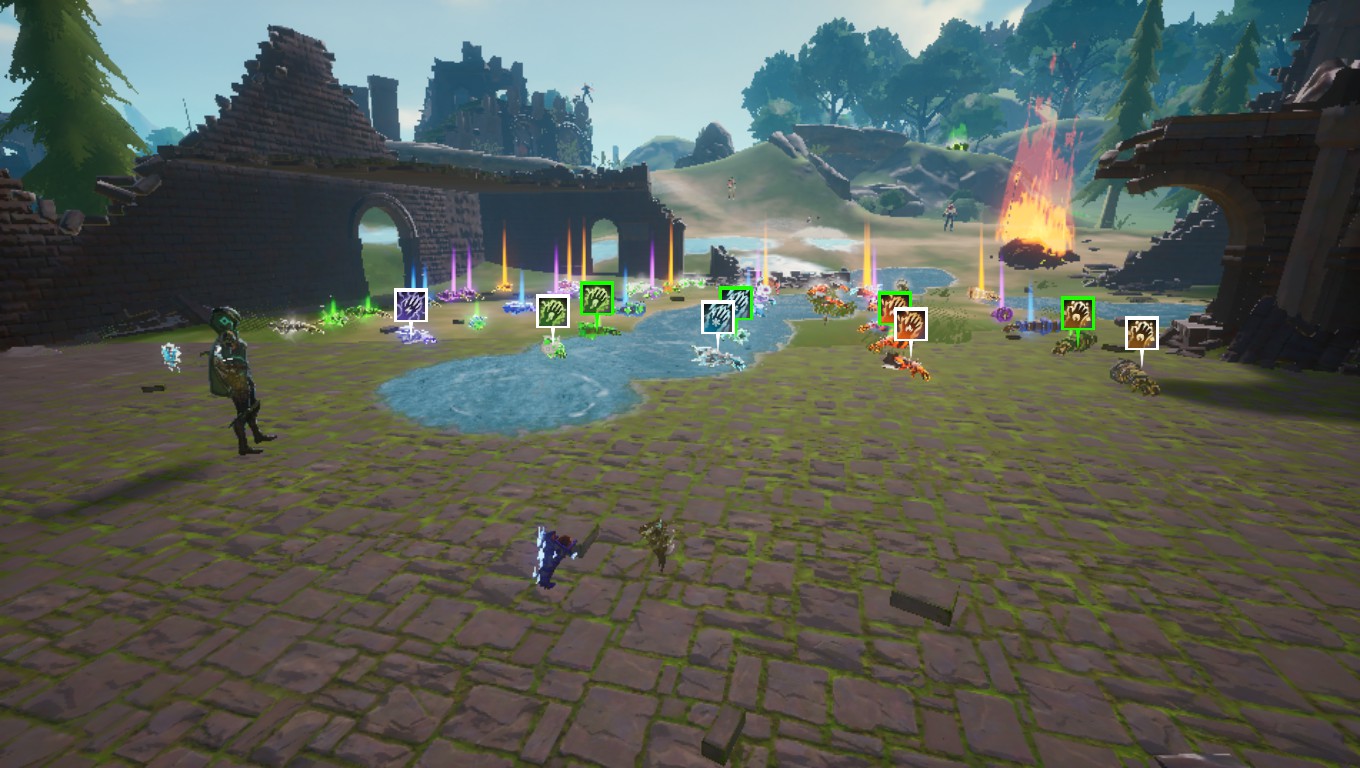 And here is a feature that can help in the battle with the enemy: 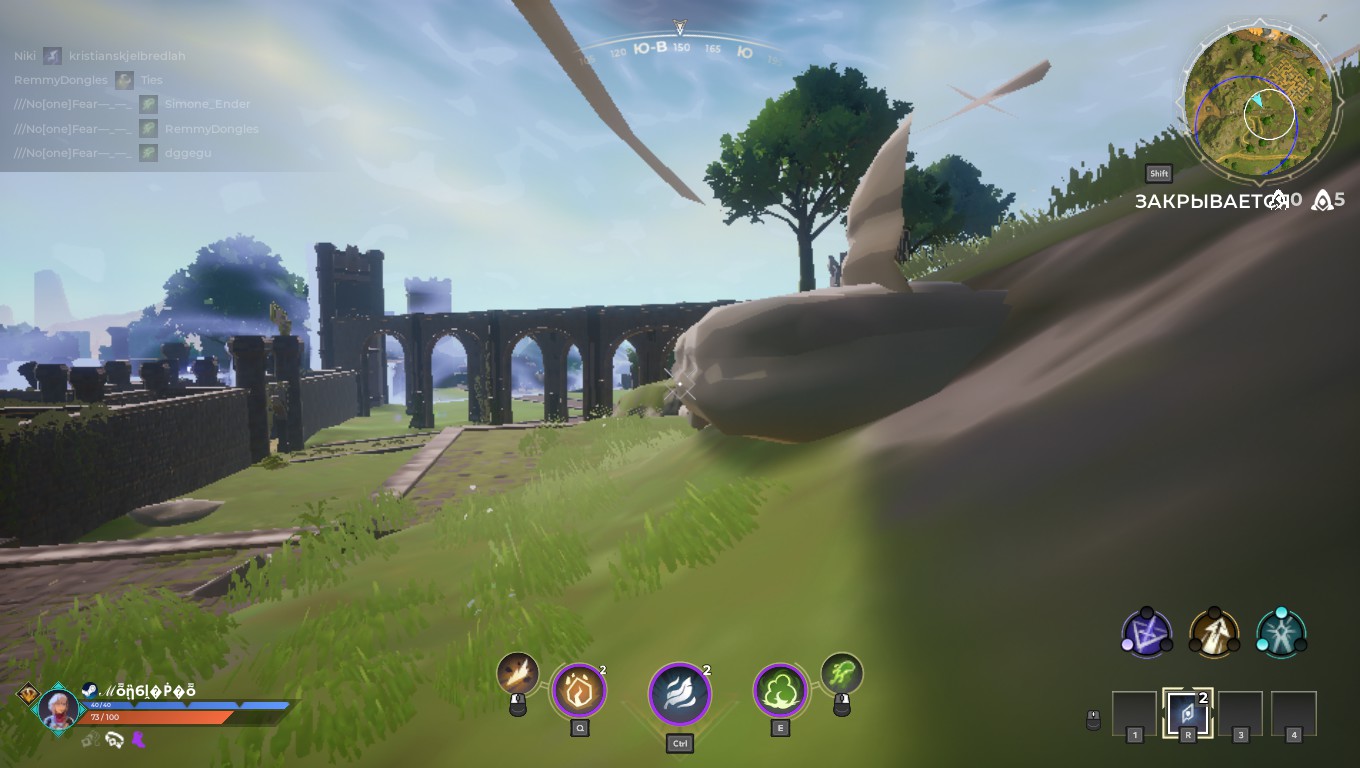 If someone finds or found other features, bugs, then throw me in the PM. Your bugs and features will get here, and under your bugs or features will be your nickname!

I hope you enjoy the Guide we share about Spellbreak – All about it; if you think we forget to add or we should add more information, please let us know via commenting below! See you soon!