I’d done it before (in under 8 minutes, barely) with a necromancer. My first run with this build, though, was sub-7. I was able to push myself to sub-6 with some luck and work. To unlock the optimal abilities, you must have progressed a little further in the game. Another requires a run in under nine minutes. This is the best run I’ve ever done with this setup.

Let me start by saying that this entire build is from Broken Plays YouTube. You can check out his video here to see the action. 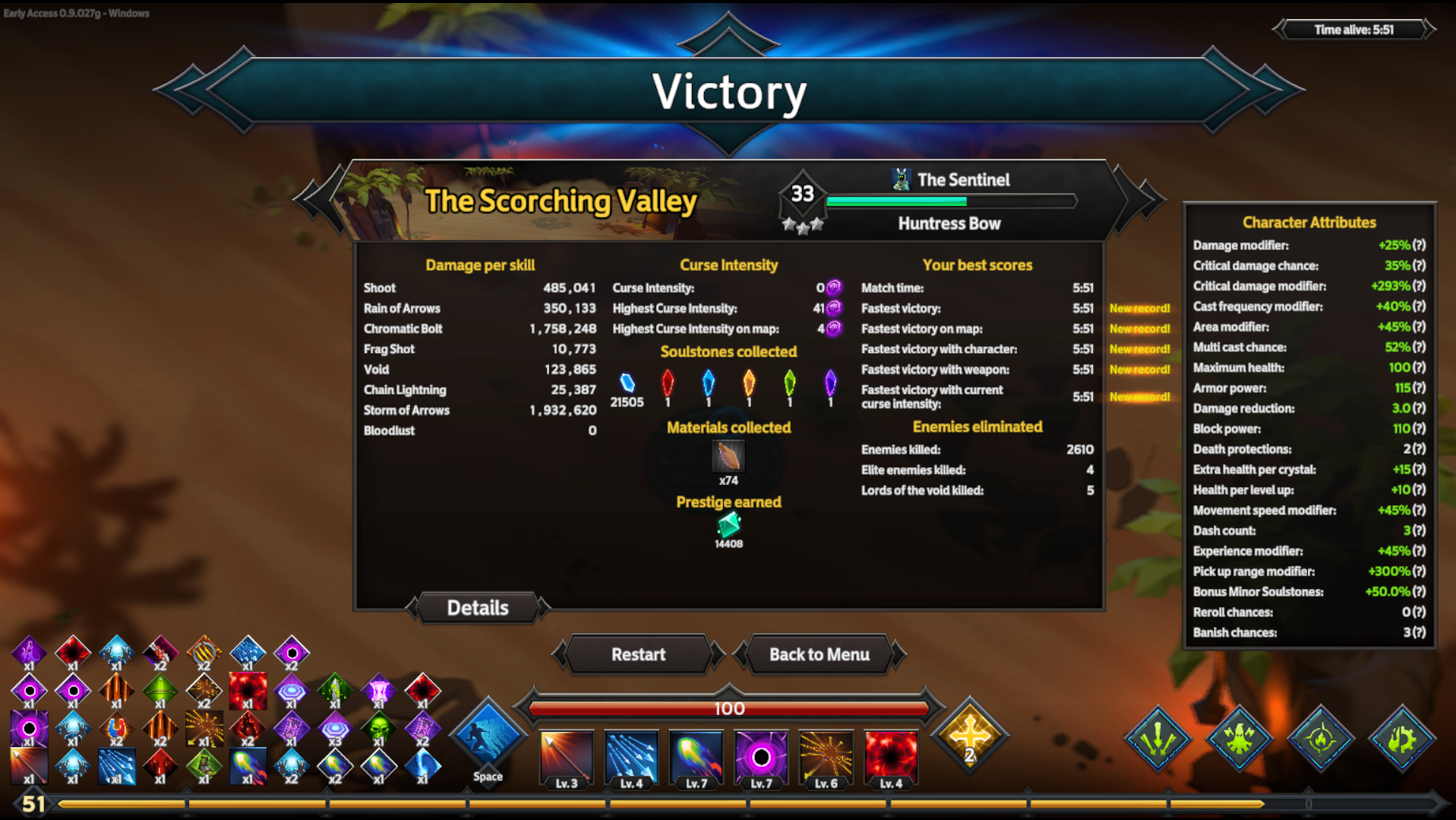 Shoot and Rain of Arrows are the two abilities tied to the sentinel’s first weapon. I prefer RoA to unlock Ricochet, but i haven’t tried it.

Void: MOST IMPORTANT ABILITY!!!!!!! This will draw enemies offscreen, increasing their spawn rate and bringing them into your Killzone quicker. While other abilities can hit things offscreen, this is much more consistent.

Chromatic Bolt is unlocked once you have purchased all currently unlockable characters (. There are 14, i believe). This self-contained device will launch offscreen to kill enemies outside your Void radius. Its homing is the best part. It will always hit its targets. Although I believe the area increases the distance it travels before it expires, I have not tested it.

Storm of Arrows is another off-screen murderer who quickly becomes insane with cast speed and multicast. It beat out chromatic bolts in damage on my fastest run.

Bloodlust: Cast speed is the king of this ability. There is no need for a Sixth destructive skill. CB and SoA can do a lot of work on their respective own.

This is …… fast speed, and aoe are the kings. They should always be taken over the damage. If you have damage multiplying runes, it shouldn’t be an issue. Most everything should be one to two shots, with bosses dying within a few seconds.

1 – Area Of Effect: This is the most important for the void, but it’s also excellent at increasing your chances of hitting distant enemies. It makes Chromatic Bolt travel further (, and so hits more enemies) before it expires, as i mentioned.

2 – Multicasting: This is just as effective as casting frequency, except that it is much more difficult (, especially with a rune that I will discuss later). More casts = more hits = more dead enemies.

Everything else is irrelevant. I would choose Fragility over other debuffs (maybe doom) to make bosses a little easier.

These will make life a lot easier. Damage rune modifiers, like most damage sources in this game, are multiplicative rather than additive. The bulk of damage runes is unlocked as you go through the game. However, I’ll go over the unlock requirements as well.

1 – Purity – Increases damage by 50% while decreasing it by 5% for each bad effect on the victim (. To be clear, the empowered versions, i.e. melting for burning and weakening for fragility, are not included.) Unlocked after defeating 200000 foes in total. In my run, I used Focus Fire. Although it was a blunder in retrospect, it added 40% damage to the game at the expense of a 20% effect. Unlocked after defeating 2000 top opponents,)

2 – Executioner – Enemies take 5% extra damage for each negative effect they have on the target. You can get it by winning a match on the Dungeon of Despair map with all curses, up to and including Tier IV, enabled (5. Because all of them are multiplicative, this eliminates the negative effect of purity and then some.

3 – Generalist – You do 5% extra damage for each skill you currently possess. Obtainable after fighting 400 Lords of the Void. This is a wonderful approach to employ Chromatic Bolt because its tags encompass all damage types. It also adds 12 stacks to your buff. If you integrate tags from other talents, it increases the buff’s damage by 80%.

4 – Long chains of multicasts are more likely to occur when you have Multicast Mastery. This ability may be obtained by winning a match on Caves of Dhal Zhog map 3 with all curses, including Tier IV, active. Let’s have a look at what this entails. Although we do not have enough testing or statistics to validate this, multicast can trigger itself. Multicast spells have a considerably lower likelihood of being triggered again ()), and this rune increases that chance. With less than a few hundred multicast%, you can trigger 4,5,6 casts with a single spell. I don’t know the exact values, but it appeared evident when I played with it.

I hope you enjoy the Guide we share about Soulstone Survivors – Tips How to Get Sub 7 Minute Runs; if you think we forget to add or we should add more information, please let us know via commenting below! See you soon!