A guide on how to use BetterSADX with Proton on Linux.

As the original BetterSADX guide describes, “BetterSADX is an easy to install / automated patch that transforms the Steam version of Sonic Adventure DX into an enhanced version with many more features added by the community over the last several years.”


As of right now, it’s not very obvious how to install it on Proton for Linux. I’ve figured it out, and this guide will teach you how to do it.

How to actually install BetterSADX

You can do this on the original guide – [steamcommunity.com] .

We need to run the BetterSADX installer in the same prefix as Sonic Adventure DX. You will have to adjust this command if you installed Sonic Adventure DX and/or Proton to a different directory, but this command assumes you installed it to the default location. You may also have to adjust the command to use a different version of Proton if you do not have Proton 5.13 installed or are having issues with it.

From here, simply install BetterSADX like you would on Windows.

We’ll be using the last command as a blueprint to access the mod manager executable that should now be in SADX’s directory. 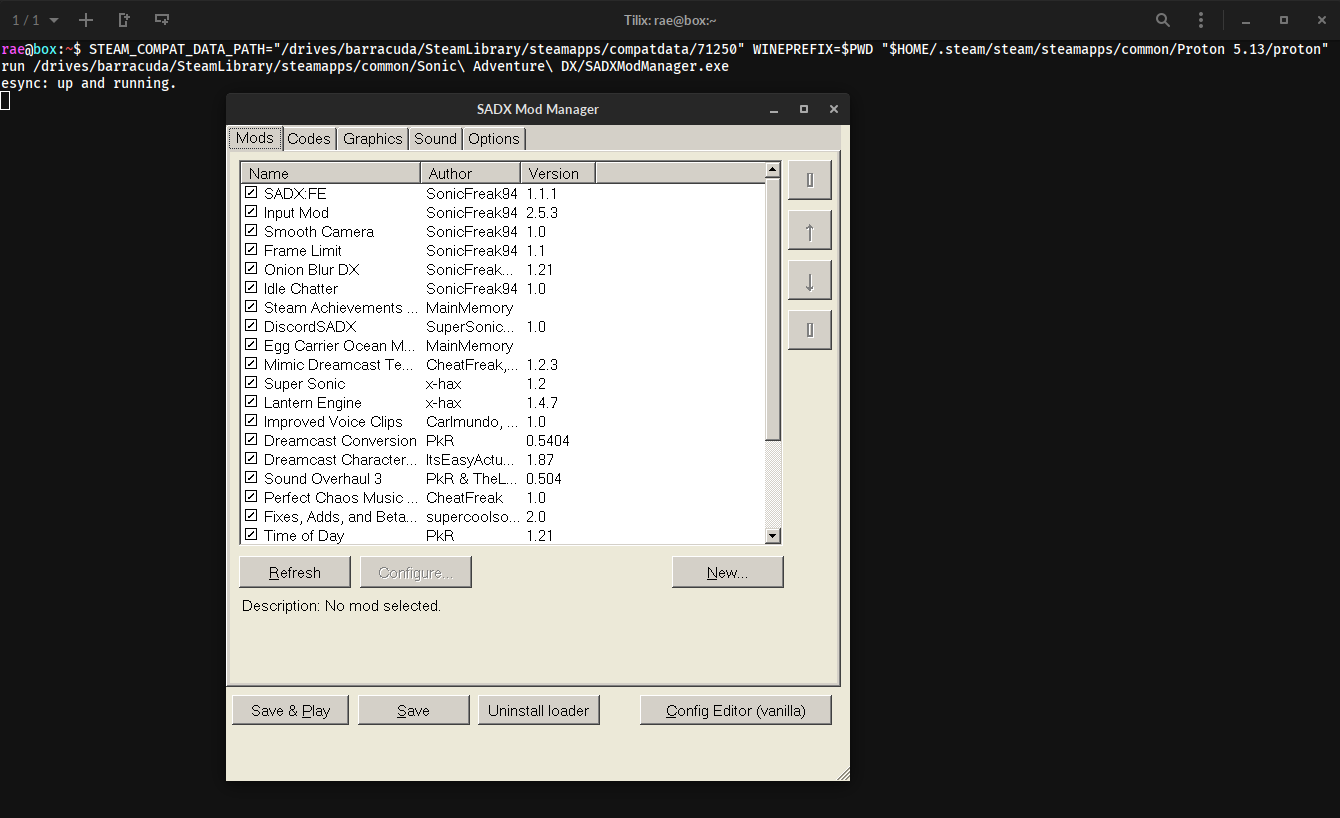 From here, you can set the game up however you want, just like you can on Windows. Ignore the painfully ugly user interface.

By default, Proton does not use the d3d8.dll file that is required for it to work, so we need to make it use it. There are two ways of doing this:


The easiest, less permenent method is using the WINEDLLOVERRIDES variable, which lets you temporarily specify DLL overrides. You can use it from the command line, which means it can be used as a launch option. Simply add this to Sonic Adventure DX’s launch options on Steam:

The other, more permanent method is editing the configuration of the Proton prefix using winecfg. Again, like before, this command assumes that the game and it’s prefix are installed to the default Steam directory, so modify it if you must:

From here, we click on the Libraries tab and type d3d8 into the “New override for library” box. Then click add. You can verify it’s been added by checking to make sure it says “d3d8 (native, builtin)” in the list. Click OK to save your changes and exit. 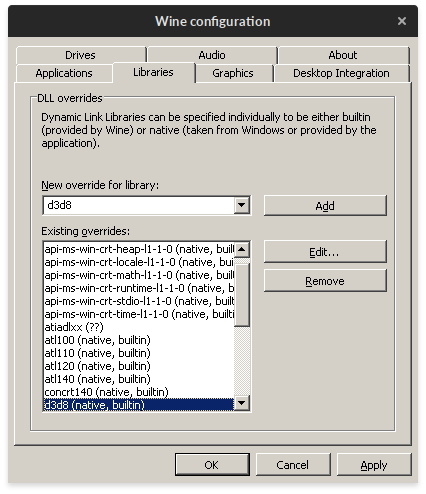 You can verify the fix worked if the game runs without complaints or errors. There’s also nothing wrong with using both of these fixes at the same time.

I’d like to thank Silent (aka CookiePLMonster) for the DLL override fix located here – [github.io]  on his setup instructions page.

Play Sonic Adventure the way it was intended!

BetterSADX is the definitive way to play Sonic Adventure. It’s the best of both worlds between the PC and Dreamcast versions. Widescreen, 60fps, with all of the original assets and design decisions Sega originally made back in the 90s. So now, you can launch the game and start playing!


If there are any problems with this guide or any ways you think this could be done better, please let me know! I’m willing to modify the guide to make things easier for the end user. Linux gaming shouldn’t be complicated, after all 😉

Disclaimer: I can’t provide much in the way of tech support. I didn’t make any of this software, I’m just telling you how to use it. But I will try to answer as many questions as I can if you ask them.

This is all about Sonic Adventure DX – How to use BetterSADX with Proton on Linux? Guide; I hope you enjoy reading the Guide! If you feel like we should add more information or we forget/mistake, please let us know via commenting below, and thanks! See you soon!