Snout, the amazing game you didn’t know you wanted to play!

How to score big or die trying. A beginner’s guide to Snout with additional tips for all!

(There’ll be plenty of that (dying) as your skills improve before you score big, most likely!)

(This is my first real guide in a long time, so go easy on me, please!)

Snout: Not A Typical “Snake” Game

In a typical snake game, you control the head of a snake, move around the arena, picking up or “eating” squares, apples, etc., each of which makes your snake longer and gives you points, usually also increasing the speed with which the head of the snake (which you control) moves. The increase in speed and length of the snake increases the difficulty of the game, because it becomes more difficult to avoid your own snake’s body or the sides of the area in which you move. Some snake games have obstacles (e.g. rocks) that appear as time passes, further increasing difficulty because each time you run into anything, you die. If the game gives you multiple lives, it’s not game over, just lives reduced by one, unless it’s your last life, when dying becomes GAME OVER.

NOT SO in SnOut!

If you gather the coins that appear by running into them with the head, or “Snout,” of your “snake,” you gain coins but your score will not increase. Also, your game will probably be short because you’ll be playing in the small starting area.

Yes, it’s true! The way you earn points in SnOut is one point for each time the ball bounces off your BOUNCY snout body! This has another benefit; the ball is reflected from your bouncy body at a greater speed if it was moving its “normal speed,” so when the ball then hits one of the many edge “blocks” around the center, circular area where you begin the game, it becomes a bomb of sorts, expanding the central movement area by many more at once!


When it’s moving at the faster reflection speed, it removes or explodes a bunch of blocks instead of the 0-1 blocks it removes when hitting a block at normal speed. (Normally, the denser blocks will become less dense and the least dense blocks will be removed completely, one at a time, when hit by the normal-speed ball.)

First thing’s first: If you don’t own this free, small, addictive game, download it! 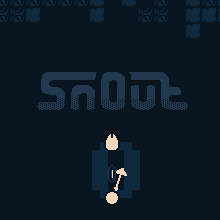 Never mind what the “snake” looks like. I will refer to it (especially to the part you control, its “head”) as a Snout or head and the lengthening shaft/body as the Tail or Body, etc.

Note: The following step can be undertaken before you have Snout ready to play.

Although it may seem tedious at first, you’ll gain some much needed rapid movement skills by practicing with your controller of choice. If you choose to skip this step, that’s okay, because you’ll be doing it all the time while playing the game. However, if your fingers are slower than they used to be, for example, you might get some helpful practice.

Hope you enjoy the Guide about SnOut – Gameplay Tips for New Players + Information Guide, if you think we should add extra information or forget something, please let us know via comment below, and we will do our best to fix or update as soon as possible!