only now, everyone has one

You get the K98K from the second kill list in Mission 2. Just non-lethal him, place him underneath the chandelier, and shoot it so it falls on him. If it bugs, I can’t help with that.

Just. Just play the campaign, get all the workbenches, pretty easy and there’s guides on locations everywhere.

Actual Meat of the Guide (the build)

The purpose of the build is to max power, which relates directly to your effective range as well as over all damage. The thing is, due to how iron sights and scopes work, any and all accuracy “penalties” simply aren’t real due to empty lung; meaning you can get some absolutely cracked damage. I’m talking three-shotting a King Tiger with AP ammo cracked. 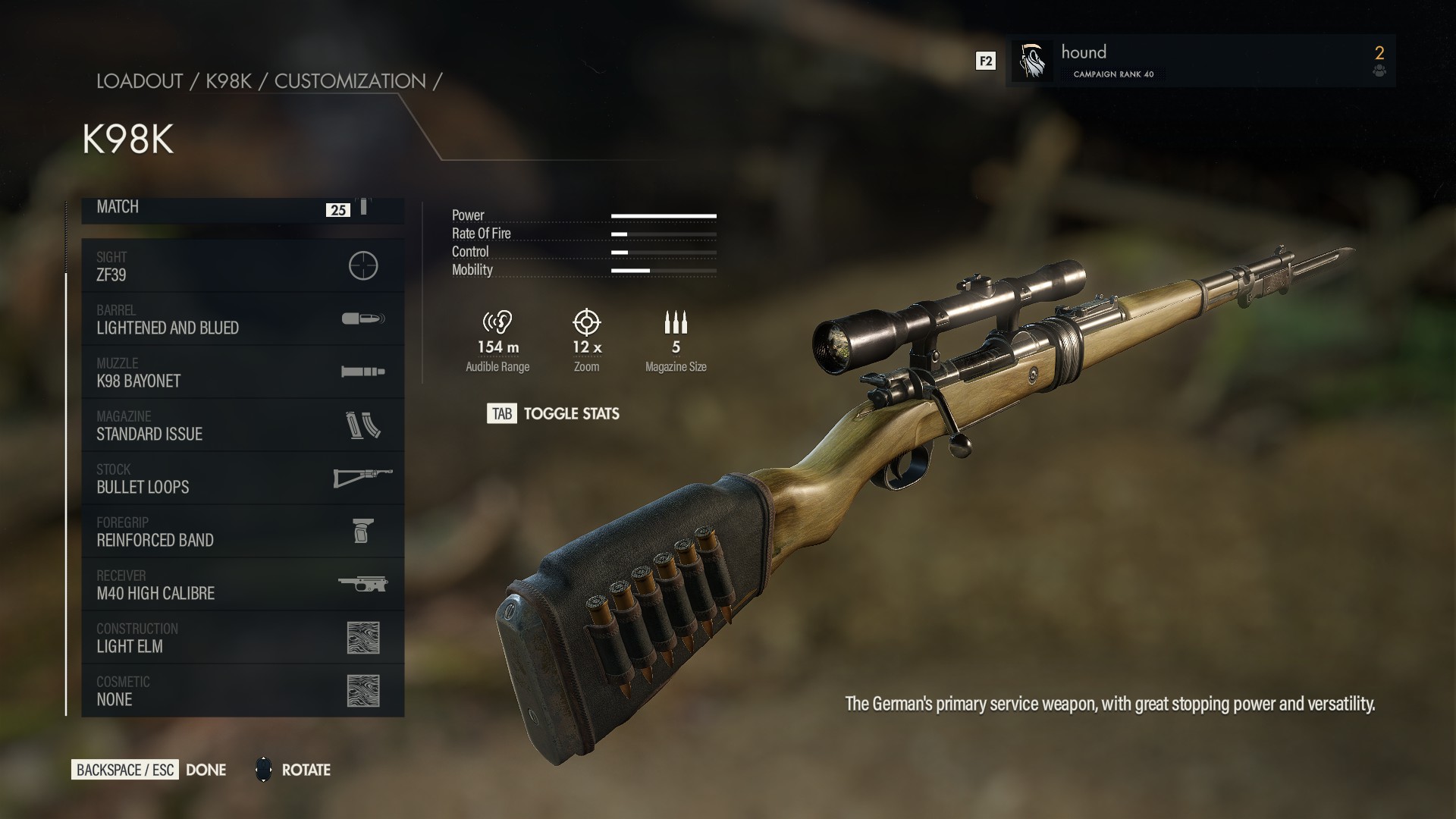 
That being said, the absolute necessities are reinforcement band and the M40 caliber conversion, as that maxes the damage for the base K98K.


And well it’s that easy. Sorry for the mediocre to low quality guide, if that’s a problem for some.

This build was made for survival mode, and at longer distances it becomes a two hit kill to the torso on Jaeger troops. This is likely solved with the GEW98 overpressure, or just having good aim, so for campaign that can be an option. This obviously isn’t a stealth build, as even with a suppressor it’s usually 65m+ hearing range with standard ammo.


I haven’t tested this on multiplayer, because I refuse to touch the PvP scene due to the presence of Easy Anticheat as its Anticheat. There’s a reason it’s known as Easy-to-Bypa*s Anticheat.


You’ll likely have horrible spread accuracy with it if you commonly use over-the-shoulder aiming for it as well, so be prepared for that.


The 3-hit on Tiger tank is measured while the Tiger tank has full back armor plating, it takes two shots of AP to expose the engine, and one AP shot to blow the engine up.

I hope you enjoy the Guide we share about Sniper Elite 5 – K98K Best Attachment One Shot; if you think we forget to add or we should add more information, please let us know via commenting below! See you soon!