This guide will give you useful tips on how to use Hades, how to use his abilities, utilize his team fight potential, and hopefully teach you how to master him.

– Firstly, I will talk about his abilities, give some tips on how to utilize them efficiently, when and when not to use them, and pretty much just explain what everything does.
– I will also discuss how to use him in team fights, what to do in team fights, and how to potentially win those fights 🙂
– This guide is made especially for new players that want to play / main / use Hades!! Most players who has spent a hefty amount of hours on smite probably has already a good knowledge on 90% of this guide.
– I’ve been maining him since November of 2019, have a good winrate and k/d especially on joust.
– I will also share some builds that I think works on him well (Will update every meta change ofc)
– There are a lot more better hades mains out there and I am completely open to opinions and corrections so please feel free to comment, much will be appreciated!

Hades’ normal staff attacks apply a Debuff to the enemy, called Blight. This Debuff stays on the target and can be refreshed. If an enemy is afflicted by Blight their Magical and Physical Power is reduced. Also each of Hades’ other powers have an additional effect.

This is Hades’ pa*sive, his basic attacks / auto attacks applies a debuff to enemies.

Tip:
Most of the players I encounter that plays him does not use this poke enough, but applying the debuff and blight is actually very useful and can give you the upper hand. It reduces enemies’ physical and magical powers, and can proc other aspects of his abilities so poke the enemies first before using your abilities!!

Hades descends into the ground and erupts from below at his ground location, doing damage to all enemies in the area. If the enemy is Blighted, they are also Slowed. Applies Blight.

Hades’ first ability is a leap type (except he goes under then comes back up) this is his main engagement as well as his escape ability. This ability applies blight. Blighted enemies will be slowed when hit in a 20 unit radius.

Tips:
– Try to apply an auto attack at each of the enemies as much as possible so that they will be slowed when hit by this ability, making it harder for them to escape.
-To use this efficiently, wait for enemies to be grouped up close together and dive in to engage. The enemies will be caught off guard and (hopefully) your teammates have your back.
-You can also hide behind walls and use the minion waves as a tool to help give you sight of where to gank your enemies.

Hades Silences all enemies in a cone in front of him. If the enemy is Blighted, they are also Feared. Applies Blight.

This ability is a cone type.

This is Hades’ main CC or Crowd Control. Using this normally to enemies will silence them. If enemies are blighted, they will be feared. (So use your auto attack if possible!)

Tips:
– When you see a teammate being focused by 2 or more enemies, help them by using this ability to peel them off.
– After diving with your 1, immediately follow up with Shroud of Darkness and proceed using your 3.
– Obviously, you can also use this silence to peel off enemies for yourself if you are being chased and you have no mana, know you are going to lose in all outcomes, your abilities are on cooldown, etc.
– Don’t hesitate to apply this to minions as well, I will explain why in the next section.

Hades devours the souls of his enemies, dealing damage in an area around him. Blighted enemies hit by this ability are Detonated, dealing damage to enemies and healing your allies around the Detonated targets. Enemy gods only take 50% of the damage from Detonating Blights.

This is his main damage ability, it has a radius of 20 units and detonates Blight.

Tips:
– This is usually the ability you would want to use after doing a 1 – 2 combo.
– Try applying Shroud of Darkness to enemies that are grouped up with their minion wave, the minions will take blight as well and it will deal additional detonate damage to the enemies. Only do this when there is 1 enemy. 3 enemies that are grouped up together will suffice for the detonate damage as long as you keep them grouped up. Think of it as Zeus’ 1st ability, enemies nearby will take damage.
– Use this ability to detonate blighted targets near your allies so they can receive healing.

Hades calls to all enemy souls nearby, creating a Vortex which drags targets toward him, dealing damage every .5s for 4s. If the enemy is Blighted, their Protections are reduced. Hades also gains Protections and 10% damage mitigation for the duration.

This is Hades’ ultimate ability. It is an AoE that basically sucks up enemies in a 30 unit radius, dealing damage every tick. This ability ticks 8 times.

I play hades mostly on solo lane as of season 6 through 7. For the meantime I will recommend these builds I use in those previous seasons.

I build Warrior’s Blessing. Try to prock this by hitting your enemy with Death From Below But be careful doing so, as you can be ganked and being left without escape. Use Shroud of Darkness and Devour Souls for safer plays.

At this point you can sell your Warrior’s Blessing and start buying these core items:

You can switch out Warlock’s Staff for Rod of Tahuti if you think that you are lacking damage. Especially if your teammates have more powerful builds. Make sure to go for half HP enemies when building tahuti.

You can switch out Bancroft’s Talon for Divine Ruin if your enemy comp is full of healers. Switch out one of the defense items for Pestilence.

You can switch out Blink for Teleport Glyph if you want bigger map rotations.

Please buy wards ._.
I will even provide a warding guide below, credits to u/Jasperthekitteh and ZetaBosioRS 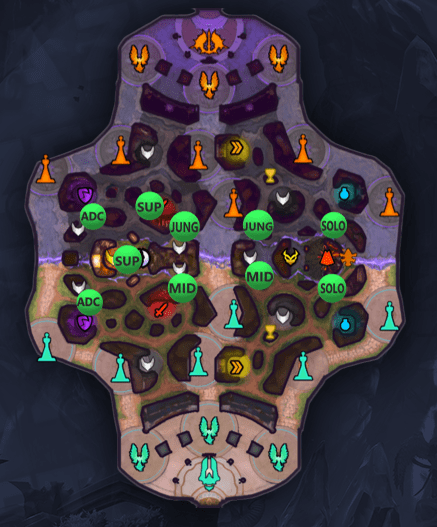 This build focuses mainly on hybrid cooldown and damage dealing for team fights on Conquest.

Whenever I play joust, I rarely build defense. Usually I go full power.
No starters, straight to either Bancroft’s Talon or Divine Ruin.

You can buy Book of the Dead before Rod of Tahuti to start stacking early and then going either Doom Orb or Rod of Tahuti right after. Do note that your damage won’t be as nutty as with early Tahuti. This is mainly for late game play style.

Depending on if I think the enemy will out-pressure us or if I think that I will stay on lane beyond the 2 minute mark.

Stack Book of the Dead and Warlock’s Staff early, rush those items and it will give you approximately ~1200 power late game with potions.

Sell boots in exchange for Rod of Tahuti.

I only buy Magic Shell if the support or tank doesn’t have it.
Make sure to upgrade your Blink relic as it gives you 10% damage mitigation buffs for 2s after activation. Can stack with your ultimate’s damage mitigation.

This concludes it for this simple guide, this should be enough to narrow down the needed and necessary information for newer players coming to smite especially those who wants to try out Hades. He is generally a fun character to play, can be overall versatile when built and utilized correctly.

Hades is already a tanky mage to begin with similar to Zhong Kui. He has a base HP of 475. He has damage mitigations so don’t be afraid to dive in! That is what i like the most about him, but of course with care.

Always remember to keep an eye out to bait enemy dashes and leaps. Keep track of when they’ve used their relics to bring out huge potential of his damaging abilities. Try to see right at the beginning of the game whom among the enemies have bought beads as their relics, you can also have your teammates call out any enemies that have used their relics.

Try to dive in team fights by surprise, this means hiding behind walls, making sure to let your teammates informed about an ambush. How exactly do i play him? Most of the time i use him to catch enemies off guard, deal damage, and dipping out, letting my teammates secure the kills. This is a useful tactic so you and your team can go for objectives. Execute these combos below:

AoE: Area of Effect. These are abilities that will affect the chosen area. They do not have to be “tied” to the God that cast them.

Clash: (Not to be confused with the gamemode) Team fight or 4 players from each of the team fighting in a certain lane / jungle.

Creep / Wave: Also known as Minions. Are monsters not controlled by players that are spawned near the Phoenixes.

Focus: Direct all attacks to a single target.

Gank: To attack an enemy by surprise while they are off guard in hopes of getting a kill on them.
Typically pertains to gods from other lanes or the jungler.

Peel: Using Crowd Control and/or damage to force an enemy away from an ally.

Poke / Hara*s: Attacking enemy gods while in laning phase, in order to bring their health down to set up a kill or force them out of the lane.

Proc: Short for “Process” to trigger an item or an ability’s pa*sive.

Rotation: To move around the map.

Hope you enjoy the Guide about SMITE – How To Be The King Of The Underworld, if you think we should add extra information or forget something, please let us know via comment below, and we will do our best to fix or update as soon as possible!