Below will be a guide to each achievement and information I have picked up from playing. The game from what I understand is uncompletable at this point, but from a discussion post with the owner (found here – [steamcommunity.com] ) it should be fixed in an update coming soon.

Fight and win a battle against the Russian invaders.

Fight and win 10 battles against the Russian invaders.

Fight and win 25 battles against the Russian invaders.

Fight and win 50 battles against the Russian invaders.

Throughout the majority of this game, you will be tasked with leading an ambush upon the enemy in various way. Each successful completion will result in a victory, which will count towards your achievements. However, there is some issues with how the battles operate and this can cause you to either die in combat or be stuck in a loop while waiting for the enemy.


I do recognize the “realism” that comes from a game like this. You have limited rockets to take out an artillery placement or tank, so every shot counts. One of the biggest flaws with this is when trying to take out a convoy of enemies and only having a single rocket. If you miss, you don’t complete the mission. We will go over some of these missions and which ones might be best to admit defeat on to avoid the head ache.


Another thing, the AI programming in this game is undoubtedly wonky. You can use this to your advantage, but always be mindful of where troops are since they can one shot kill you.

A Map of the Game

Being that the conflict is current, we are presented with a map of Ukraine. From this, we can plan our next move against the invaders. 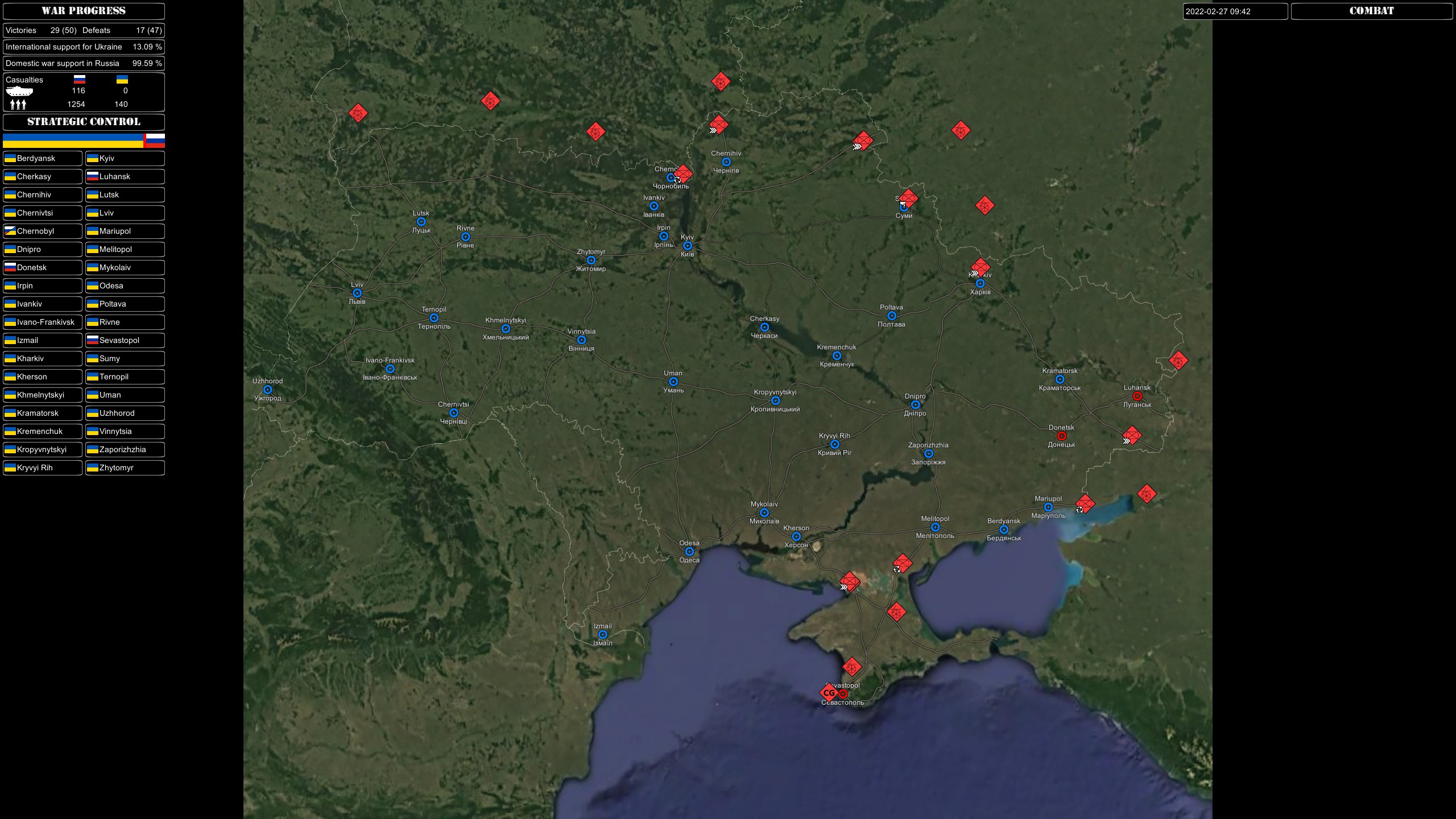 We are given a lot of information to look at as well. We can take a look at the left side of the screen to see the current state of a city. 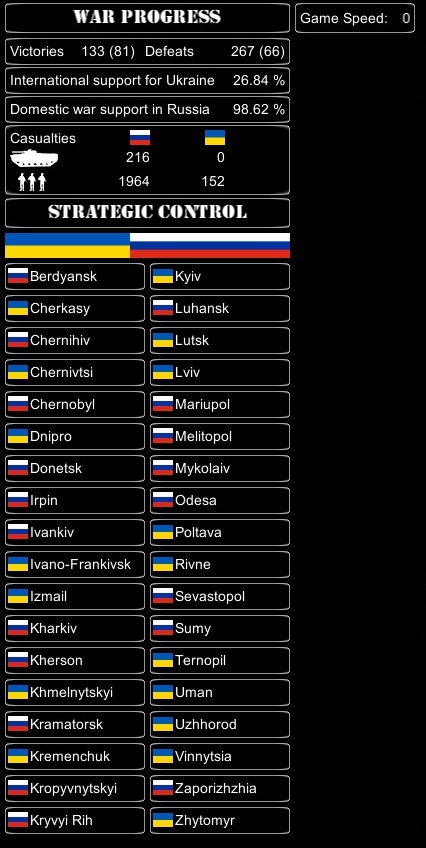 
At this time, I do not know what the war support is for.


It also counts the amount of casualties on both sides. At this time, the Ukraine Army will have 0 casualties for vehicles.


We can see a flag next to each city, which tells us who has occupation over it. It is possible to have it half and half if enemy forces are not fully through with conquering it and you win a battle. However, I don’t know if you stop there process if the city can be reverted back to it’s homeland occupation.


Game Speed is the final thing to cover, and it’s a huge one. A lot of this game depends on time to pass for battles to happen. You can increase the time with NumPad+ and decrease the time with NumPad-. Locate them on your keyboard and they will be of great help. They can also change the speed of which a battle takes place. This can help with vehicles/infantry coming on the scene quicker to dispose of rather then waiting.

On the right side is a way to tell us when we can deploy into combat. Use this tool to locate battles quicker and help assist in winning.


We are also given a box with the time, day, month, and year. If you know how to read military time, try to avoid anything in the night time. Night missions are a true nightmare since the enemy blends in with the snow better. Also, trying to use the flare gun and swapping to your primary makes you an easy target. Just try to avoid them.

What to Expect from “Battles”

As I mentioned earlier, most of these battles are ambushes. There is couple that involve you just jumping into combat, but not many.


One of the first things to note is your briefing for a battle. 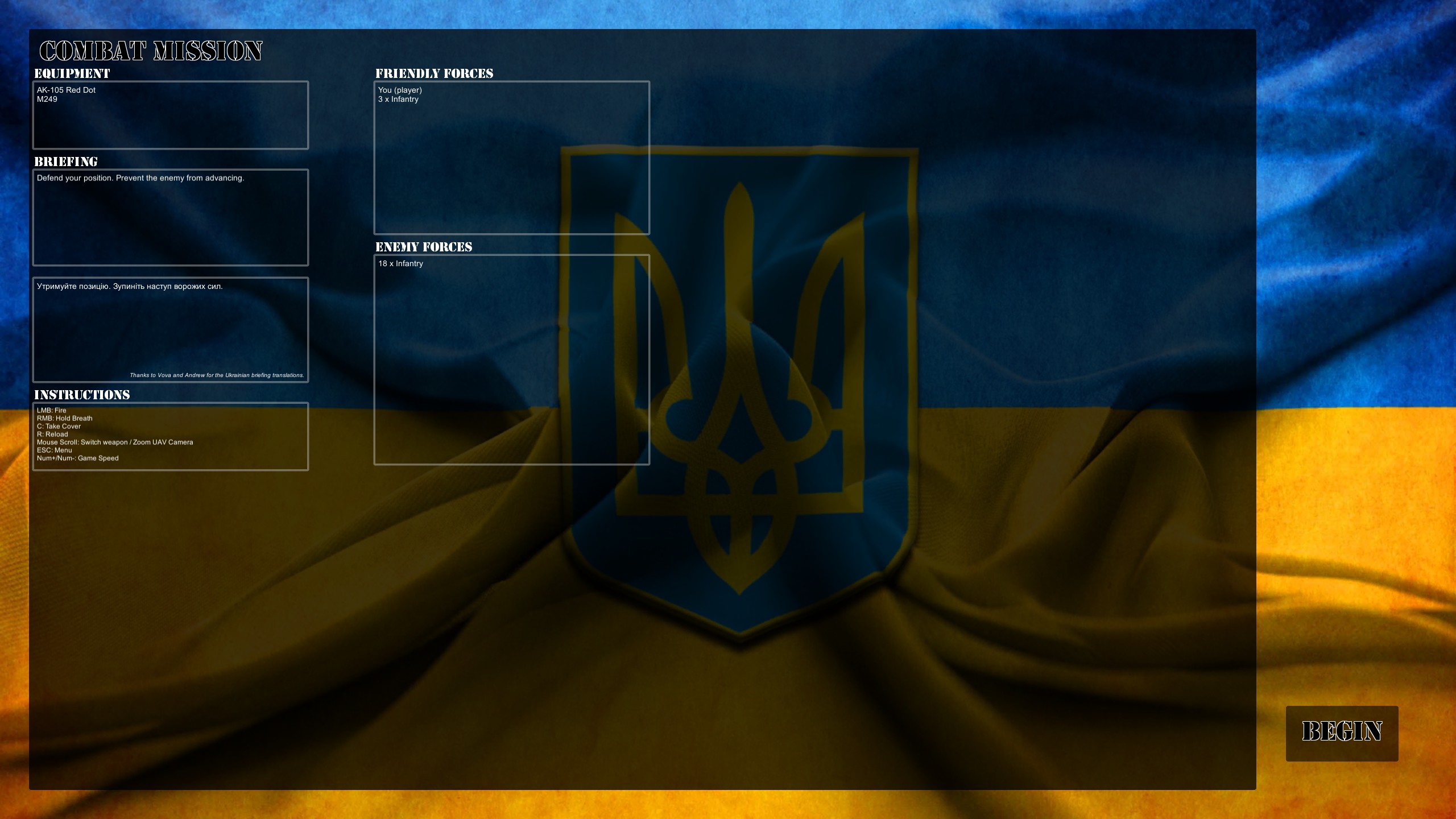 Here is where you can find all your information about what weapons you have to what targets need to be taken out. 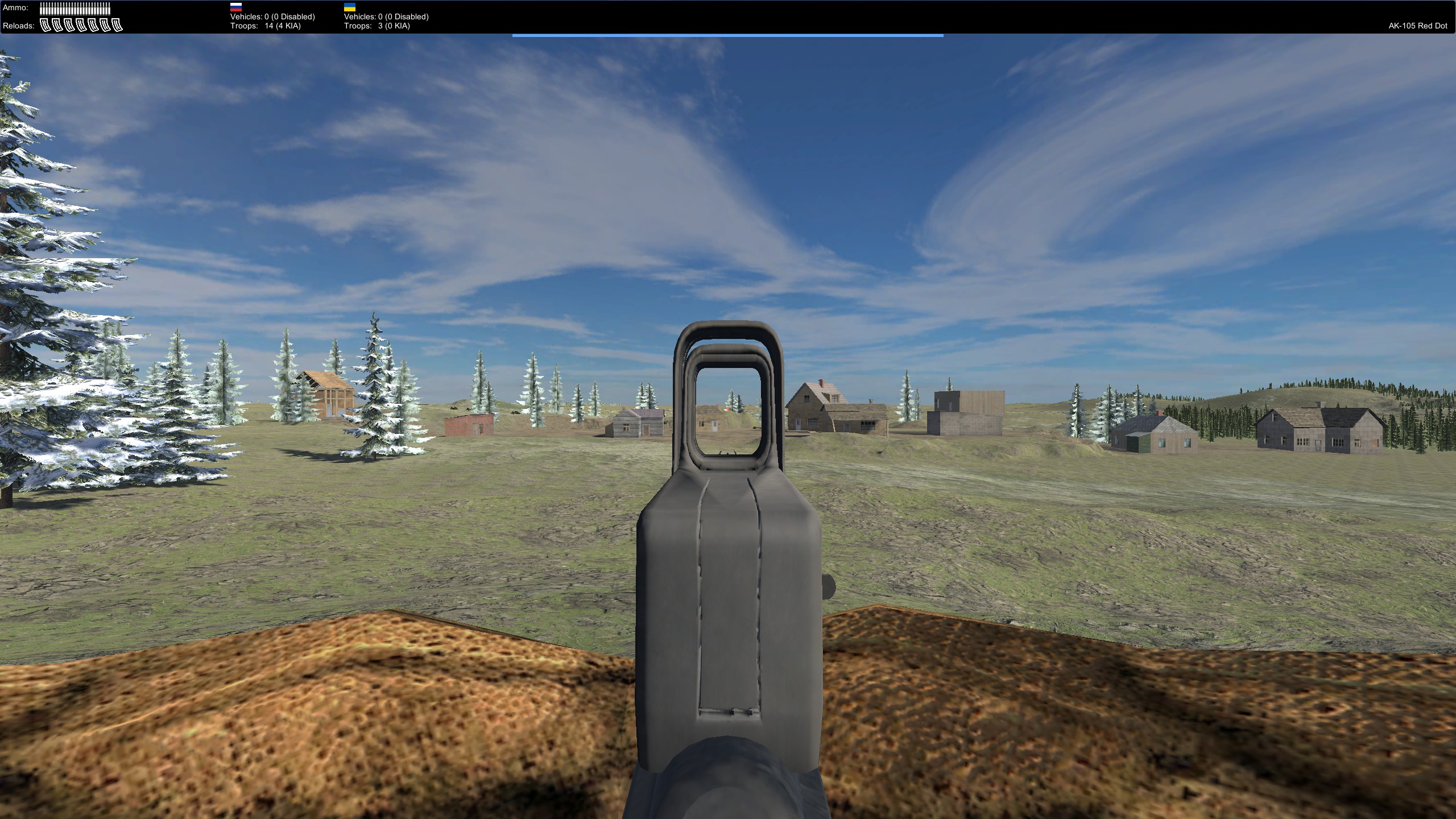 My first mission, where I was waiting for the enemy to slowly walk towards me and then for me to ambush them. We will come back to this later for a bug in this map.


Several infantry vs. infantry maps can be summed up into one word, long. You have to wait for the right moment to strike before taking a shot, otherwise you have to use the time acceleration method with NumPad + or – to make them come to you quicker.


One that stands out however is when you use the Dragunov against targets at a distance. Currently, there are two missions I know of where you use it, one being where you take out nine soldiers and the other is the Artillery Commander. Below is what he looks like. 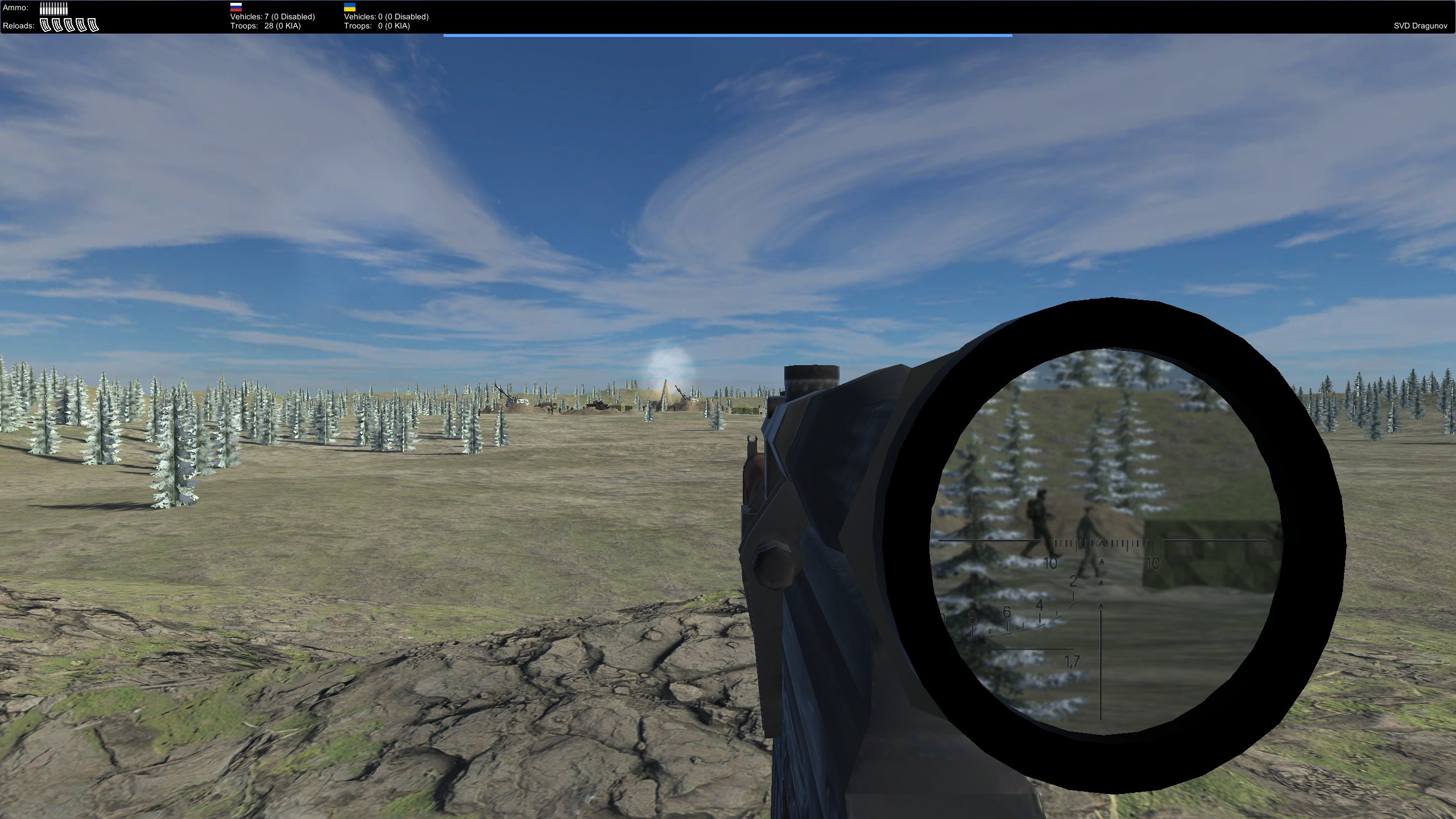 
One of the easier types of infantry vs. vehicle is when you have the Stinger or Javalin*. Simply fire and forget. 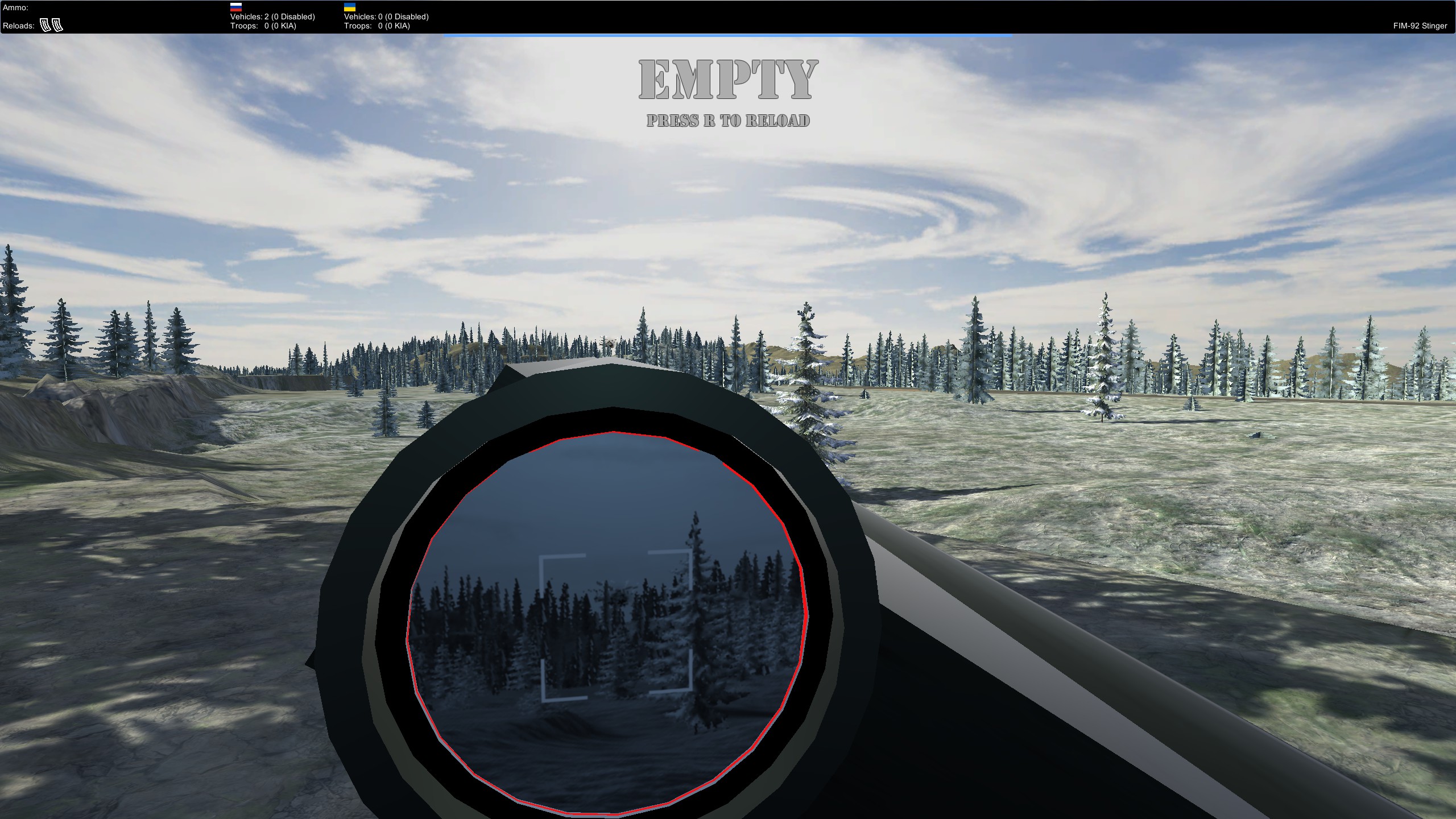 However, you will sometimes use a M3 MAAWS, RPG-7, or an AT4. These three weapons are absolutely obnoxious to use for different reasons.


*I don’t think it’s called the Javalin but it somewhat acts like one. I forget the actual name.

First off, look at the picture below. 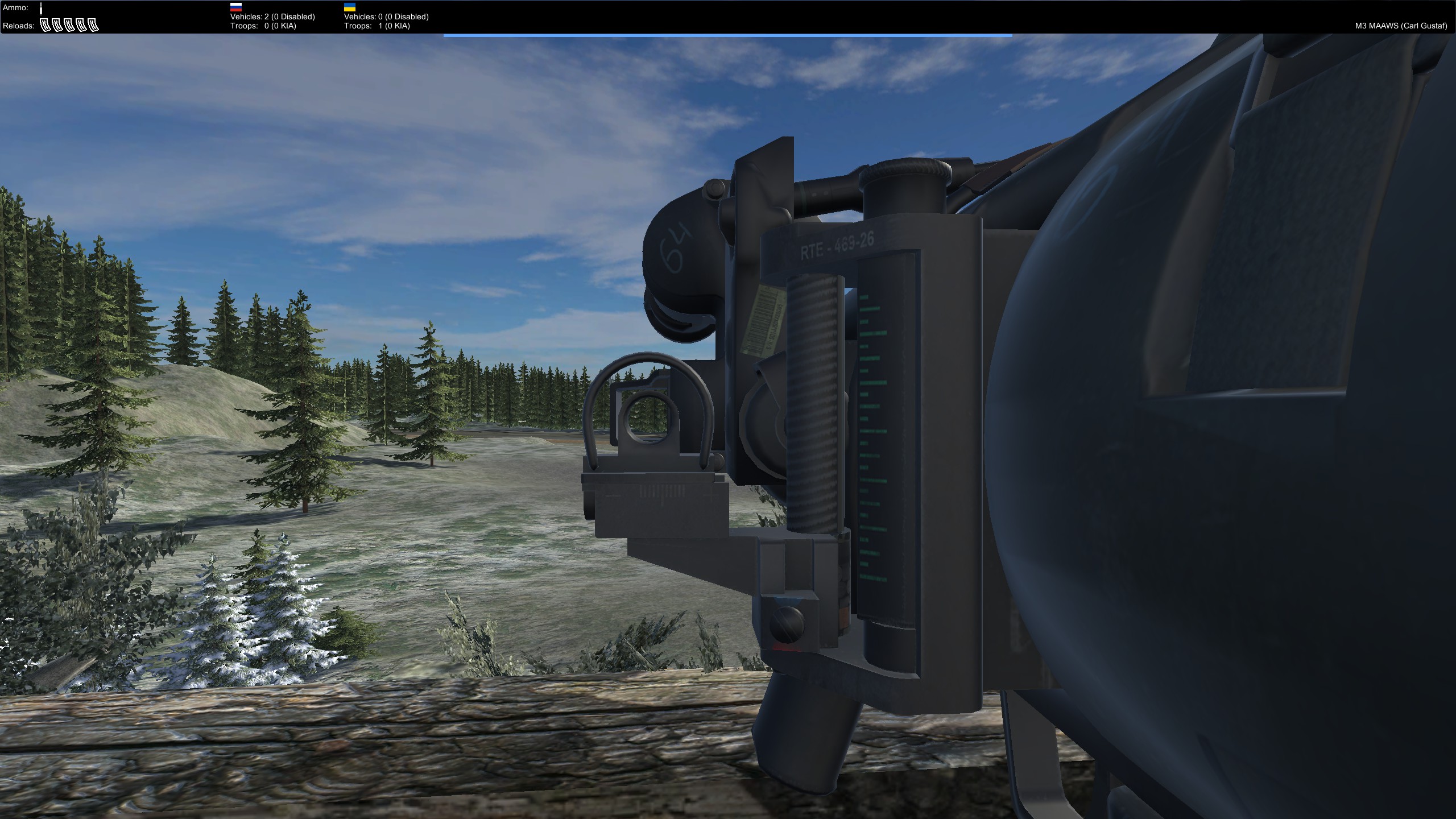 In order for me to see the road, this is what I have to do. 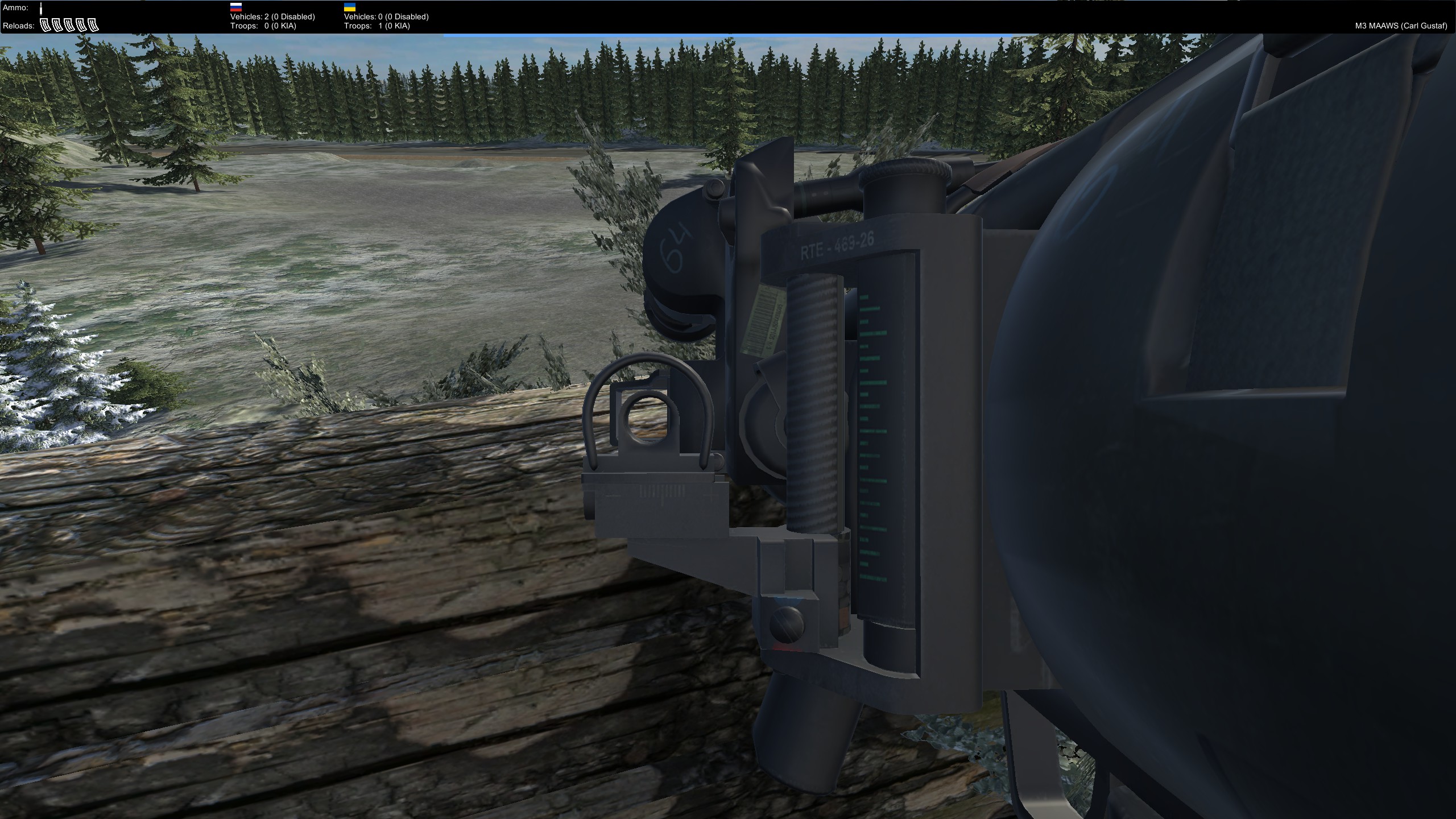 And even then, it still covers a majority of the screen. Need I say more about it?

I sadly didn’t take any pictures of this weapon, but everytime I used it against armor, I felt like it was using half of my ammo before the vehicle was down. I can’t confirm if there is a sweet spot to hit any armor (I tried to hit the turret ring everytime I did a mission like this) but the RPG-7 is just brutal to use.

This weapon comes with one rocket. You miss or don’t instantly disable the vehicle, you fail the mission. Complete waste of time doing any mission with it. 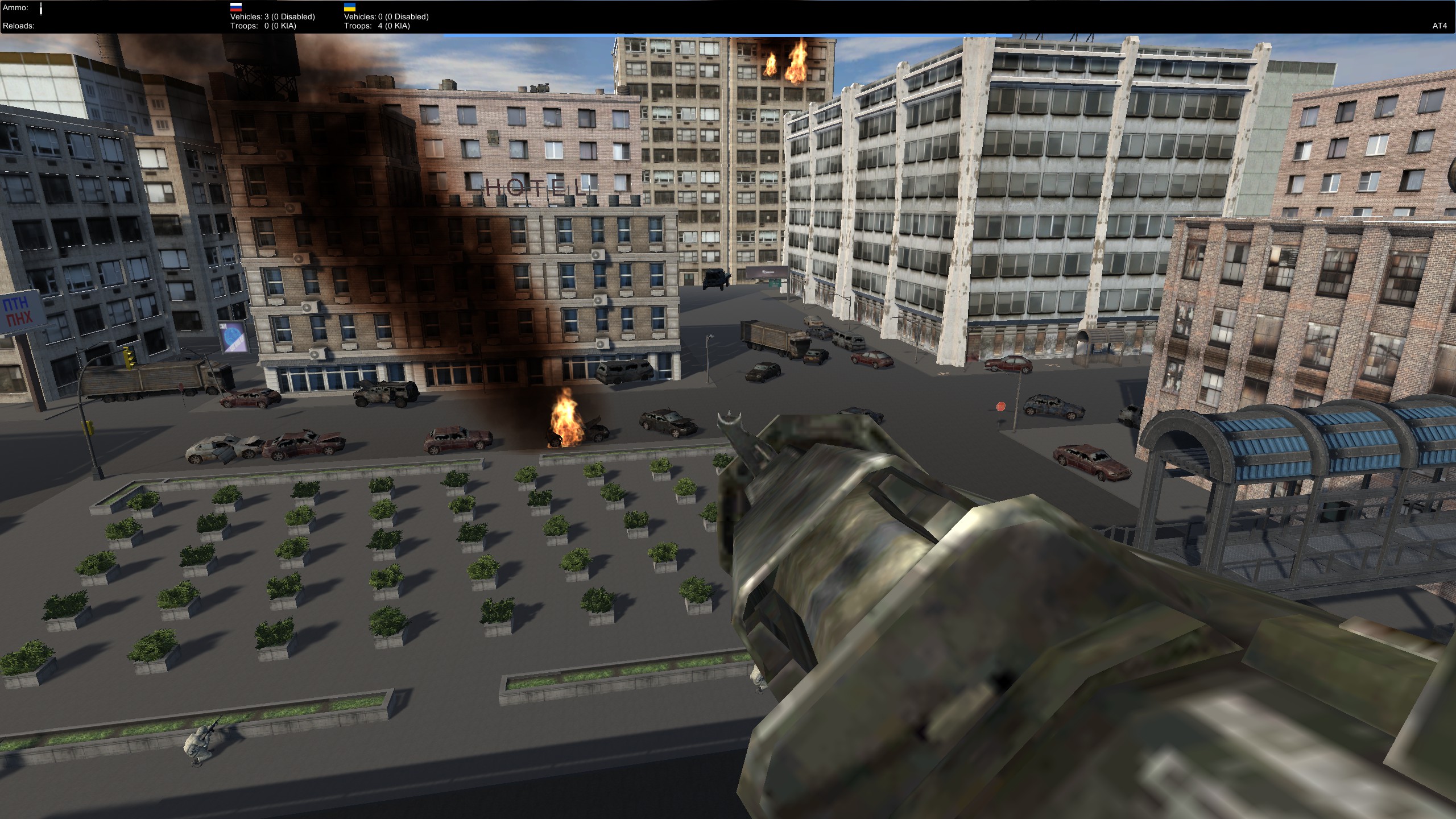 I also want to note that the damage dealt with all three of these weapons is basically nothing important. I have been lucky once to instantly disable a BTR with one rocket using the MAAWS but I had no clue where I hit it since when you reload you crouch. Where you aim isn’t where it lands. One saving grace from these kinds of missions is how your allied troops can use rockets as well to disable vehicles. That is the mechanic to how an AT4 mission is suppose to work, but because of how the weapon functions it just isn’t worth it to me.

Doing these kinds of missions are an interesting experience. Mostly because you use guided rockets to take out ground forces.


Below are pictures of what to expect. 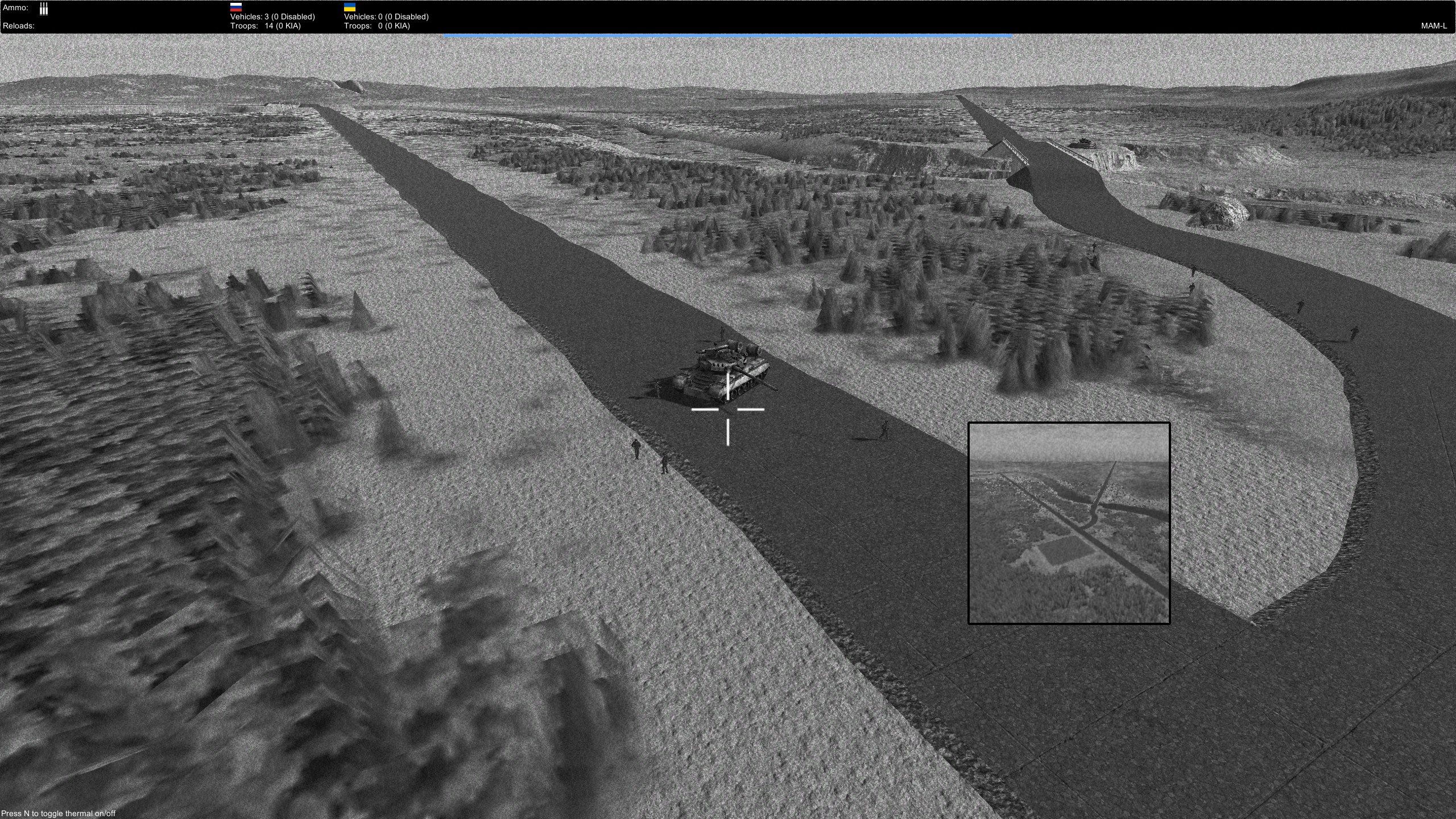 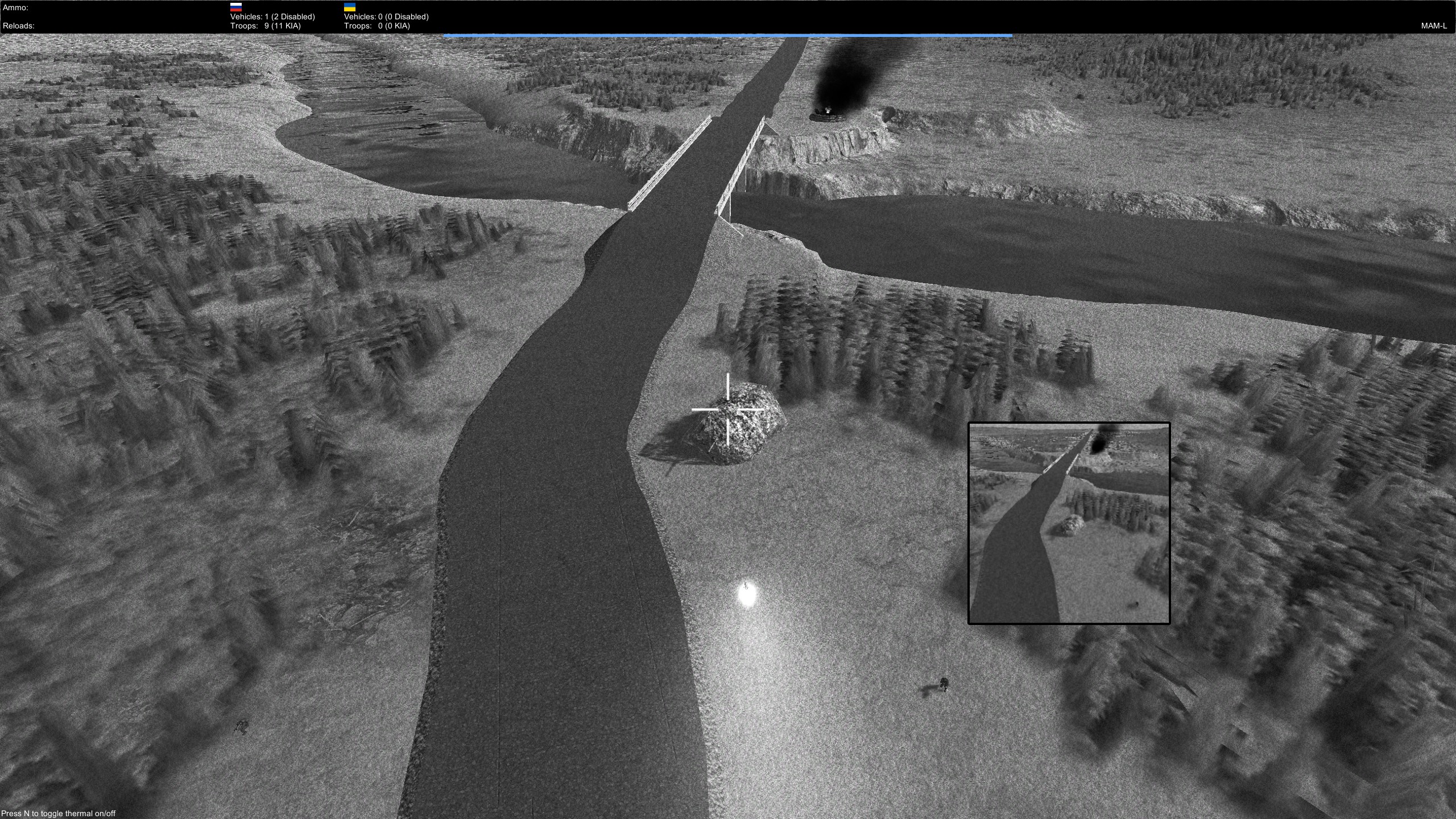 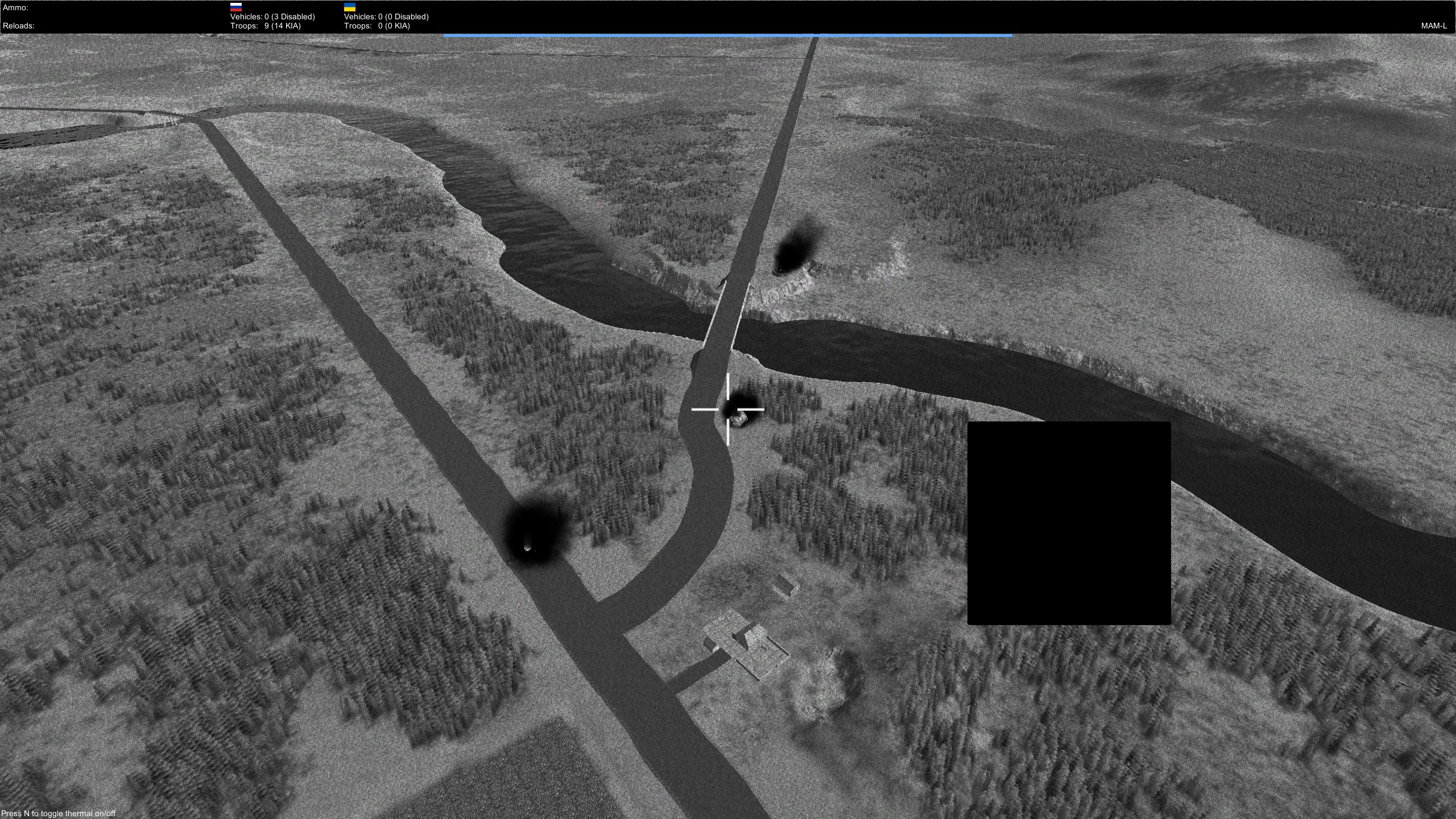 You are tasked with taking out targets with a guided missile. You use the mouse to navigate it and can see what the warhead is going towards in the little box on the right side of the screen. Use them wisely since you are only allowed four of them. You can blow up three targets at once depending on the mission. Specifically ones with convoy trucks, if you line it between the middle truck of three (so if they were in a line and labelled 1,2,3, you would want to aim towards two) it should take out all three. You might have to trial it a couple of times to see what works.


There is one where you take out two artillery cannons, but it is no different than the other missions.

Similar to the MAM-L, you use guided missiles to sink the enemy battleship. This is the final achievement that currently is unobtainable. At this time, the weapon doesn’t have thermal vision like the MAM-L does. 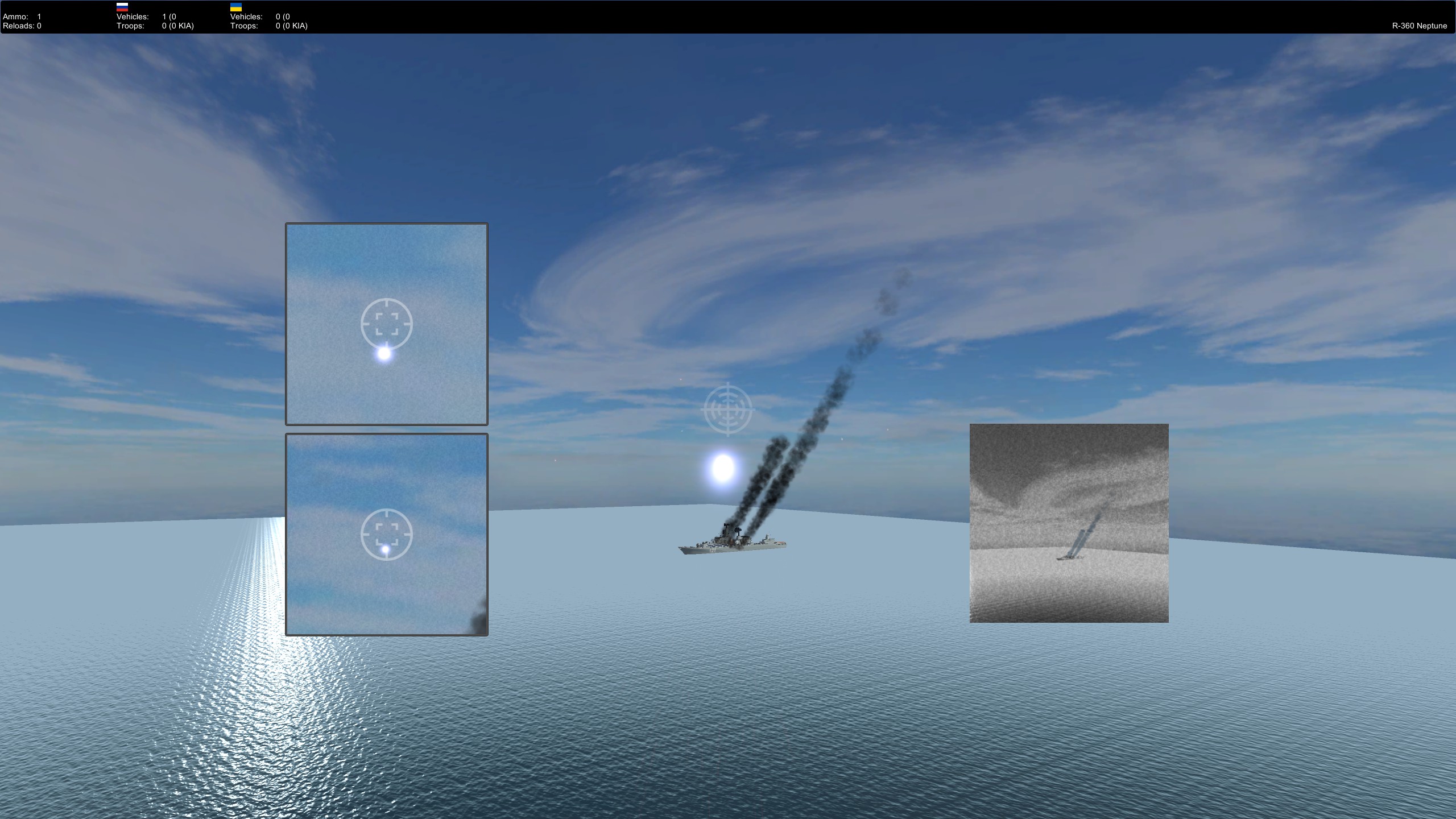 When the enemy advances to a location, they have icons that symbolize what division they are and what they currently are doing.

In the image above, we see that Ukraine has many cities that are marked with a blue dot. These are control points the enemy wants to take from Ukraine. Red dots that are marked are cities conquered. Another thing to note are the red diamonds scattered around. These are different units of enemies that move towards specific points.


What they are doing can be seen based on what the tiny white icons display on them.

This unit is pushing towards a point to capture it. They typically stay on roads and take it to the next city to capture.

When the unit is on the point, it will begin a capture phase. You will be given oppertunities to attack the unit while on it’s way to the point, and when it’s on the point. Below is an image about attacking.

A unit will be highlighted when it is available to attack and have a fire sign. It should be noted that what kind of unit they are will be marked under the Combat Log on the right side of your screen. *

I don’t know what they are actually doing at this point, but they move away from the point for a couple of minutes, then slowly try to recapture the point.

If you manage to hold your ground against the attacking unit, they will retreat. However, I have seen them disappear after a victory. Not sure if it’s a bug or suppose to show the complete defeat of the unit.


I am probably missing one but you can figure it out. The only weird one is for the navel battle which will be marked accordingly under the Combat Log. What to pay attention to is the position of the CG diamond as shown below. 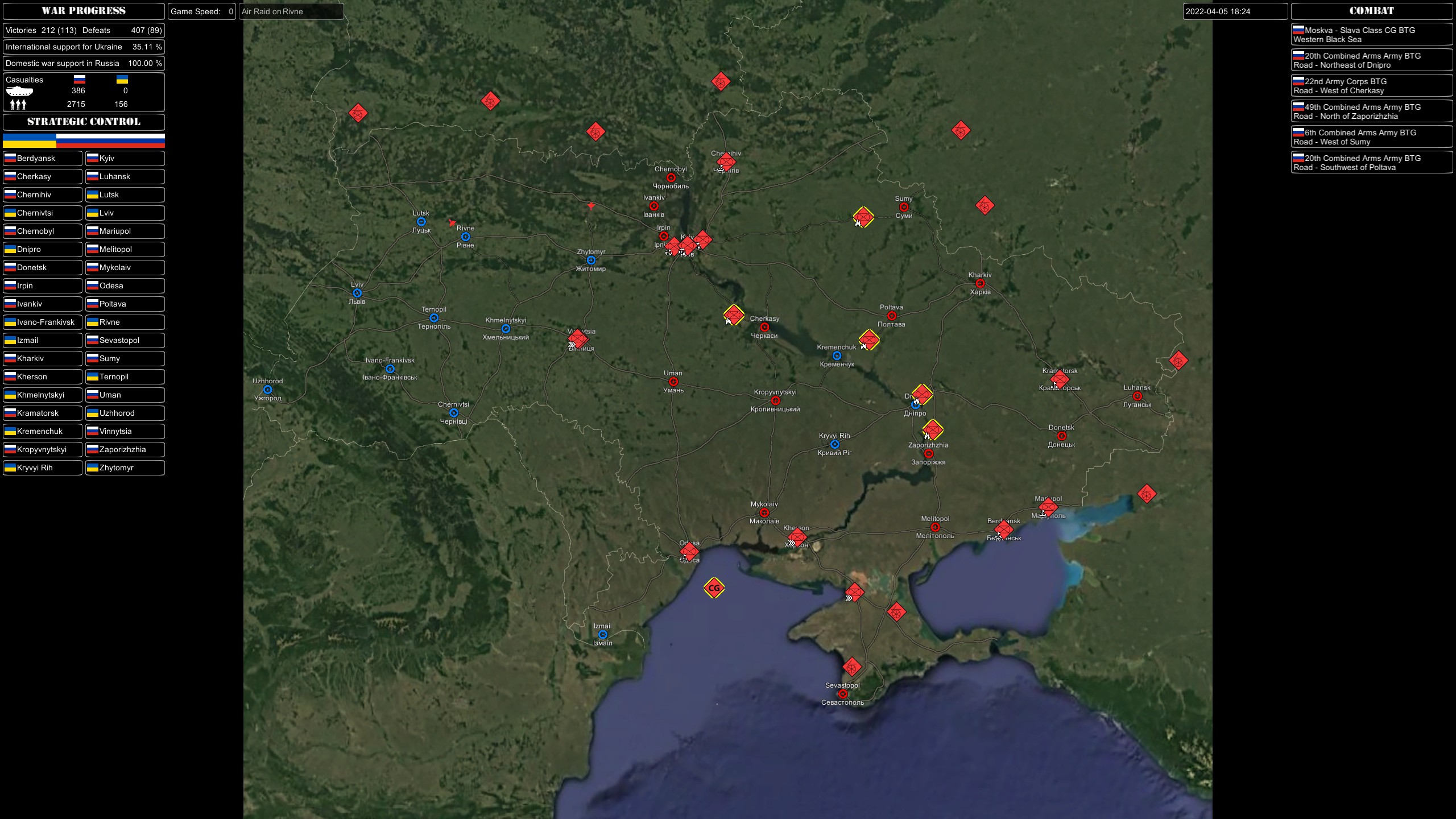 If you accelerate the time, you can watch it slowly cross the water and then become available to attack. However, you may lose a bunch of cities if you are trying to just speed run this achievement.

I don’t have any screenshots for this part, but all you really need to know is it is a one shot kill towards infantry. Depending on the weapons against armor, could be multiple.


If you die in a mission, I can’t confirm it is for everyone but all the enemies and capture points on the map gets reset. All of my data for victories and control points remain the same though. What I want to mention though is all of the locations where enemies were gets reset, causing you to have to go through the speeding up of the CG diamond.


You can however cheat this by Alt + F4, which makes it so the game doesn’t save and you can continue where you left off once you hop back on.

Obviously this game is to show support for Ukraine in the current invasion they are dealing with. It does have limited content because of how the invasion has only been going on for a couple of months. Repetition is bound to happen, and yet the game is somewhat enjoyable to play when you successfully fend off the enemy.


When the update/patch happens, I will include an edit to the last achievement.


If you want, you can comment things I was incorrect about and I can add them as an edit. This game can be confusing but we can all try to figure it out together.

I hope you enjoy the Guide we share about Slava Ukraini! – Achievements and Map Guide; if you think we forget to add or we should add more information, please let us know via commenting below! See you soon!